You are at:Home»Market Preview»Commodity currencies up, USD down in reversal day; Bank of Canada, FOMC 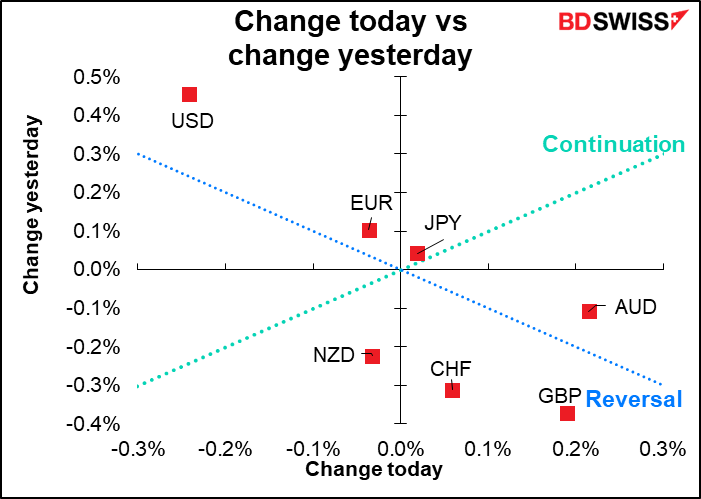 Stocks struggled yesterday. European stocks closed higher, but New York opened lower and only momentarily poked its nose above the previous day’s close. Having said that, at one point it was down 2.8% but closed down 1.2% so it did close well off the lows of the day – although also off the high, unfortunately. At the time of writing though the futures are trading +0.3%.

The VIX index, Wall Street’s “fear” index (a measure of expected volatility) rose for the sixth consecutive day. Still it remains below levels we saw last year, not to mention the peak of 83 seen during the early days of the pandemic. 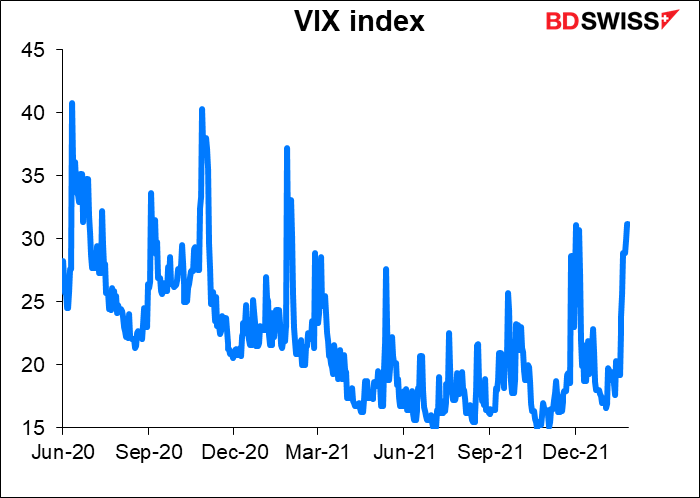 The Treasury market has been even more volatile, relatively speaking. (The Z-score normalizes the movement to present it relative to how it normally trades, rather than just giving the absolute score. This makes the various levels comparable.) The FX market has been least affected. 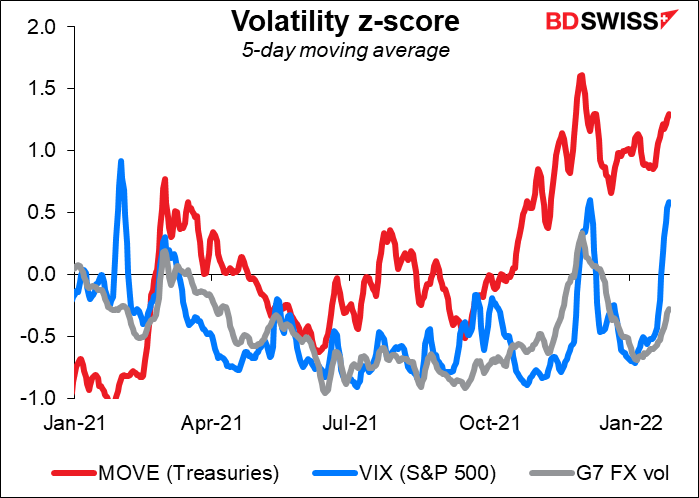 While much attention has focused on the stock market and the Treasury bond market, the corporate bond market is also of interest. What’s interesting here is the relative lack of movement. Prices have come down but it’s not the kind of plunge we’ve seen in the stock market. 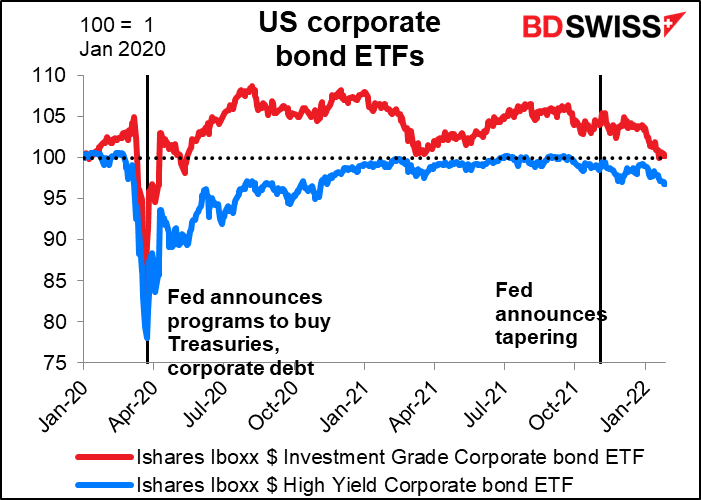 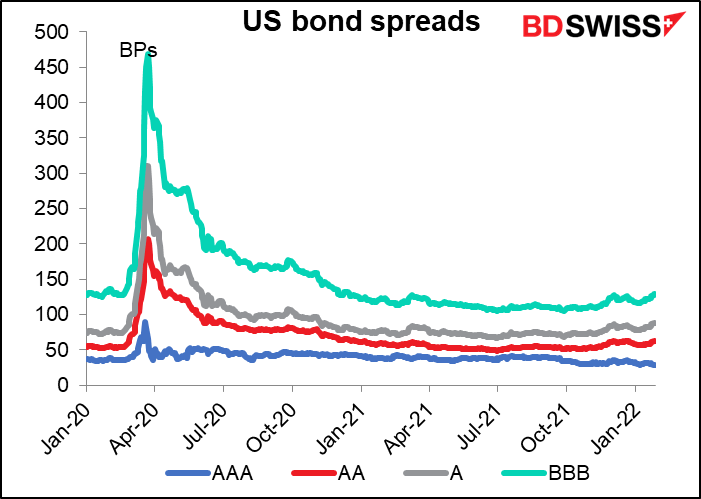 As for the FX market, it was largely a day of reversal. If you look at the second graph, you’ll notice that several of the currencies line up along the blue “reversal” line. AUD and GBP rose on Tuesday almost as much as they weakened on Monday, while USD weakened almost as much as it strengthened.

EUR started the European day below 1.13 and continued to weaken for most of the European day but then began to recover after the US came in. On my data, EUR/USD is higher than it was yesterday morning but EUR crosses are slightly lower.

And while the market is getting increasingly bearish on EUR, as shown by the falling EUR/USD risk reversals, it’s getting increasingly bullish on EUR/CHF, as shown by the rising risk reversals there. In my view, if I were worried about war on the European continent, I’d be buying CHF not EUR. Switzerland is a neutral country where until recently everyone was required to have a bomb shelter in their basement (mostly used as wine cellars nowadays). Germany on the other hand depends on natural gas from Russia. 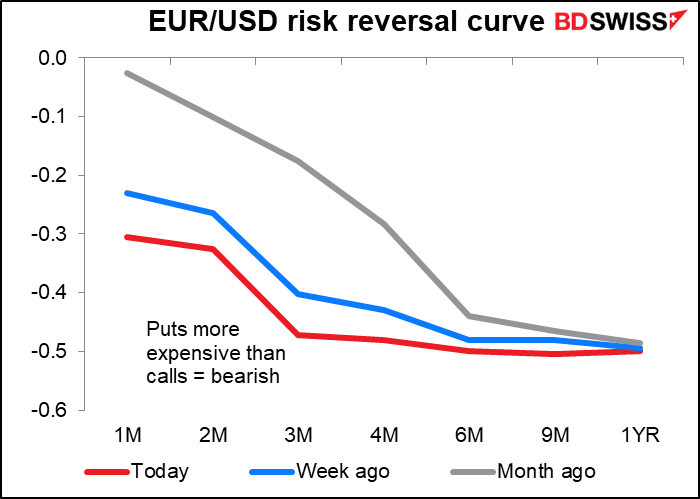 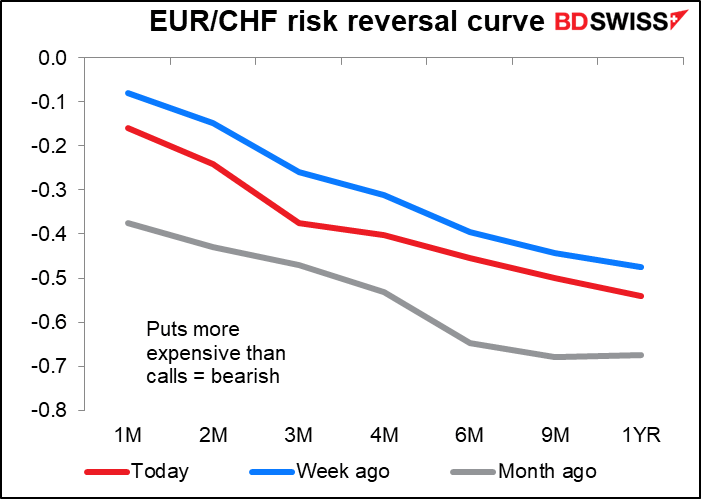 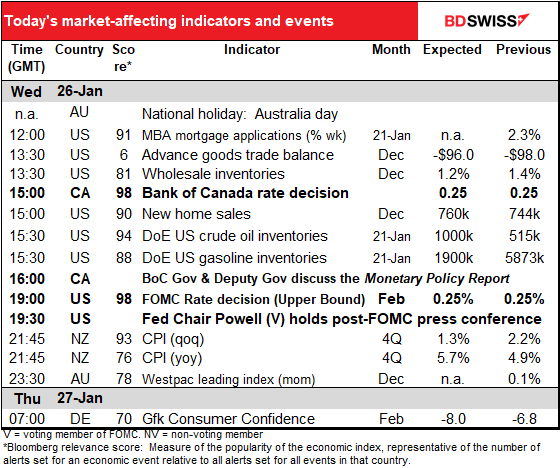 The focus today is squarely on the two central bank meetings: the Bank of Canada followed by the US Federal Open Market Committee (FOMC). I covered both of them in my usual excruciatingly boring depth & detail in my Weekly Outlook, How far and how fast?  So I’ll just repeat the conclusions here and you can read the whole megillah in the Weekly if you’re interested in the why behind the what.

The Bank of Canada will hold its policy meeting and release an updated Monetary Policy Report. At their last meeting on Dec. 8th, they said they expected to start hiking rates “sometime in the middle quarters of 2022.” The market doesn’t believe a word of it. It’s pricing in a 71% chance of a hike at today’s meeting and a good chance of another hike at the March meeting. Investors will therefore want to see whether there is in fact a rate hike at this meeting and will want some guidance on how quickly the Bank will tighten after that. Will there in fact be six rate hikes this year as the market is currently discounting, or will the Governing Council push back against market pricing? 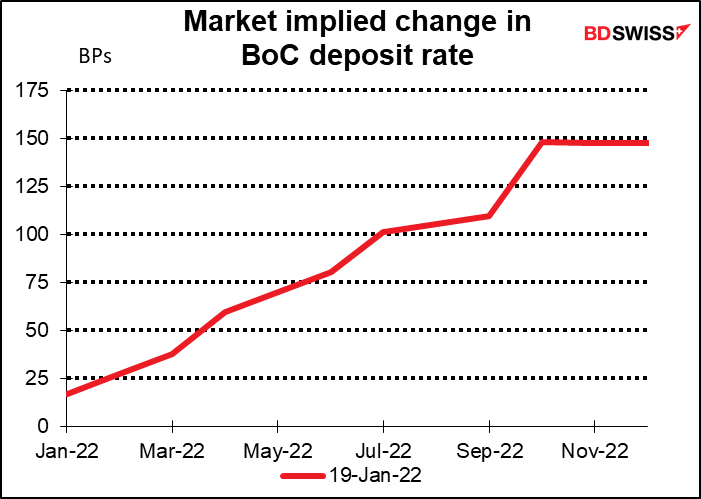 The key may be if they revise up their 2022 inflation forecast in the accompanying Monetary Policy Report. 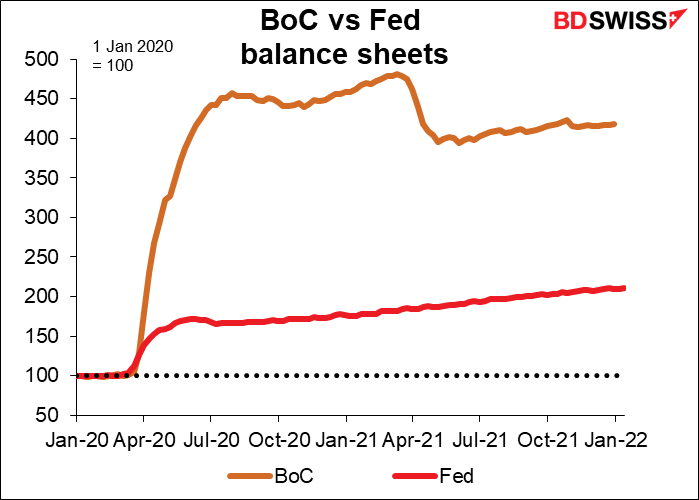 It’s not clear to me from the October Monetary Policy Report whether they intend to let the balance sheet fall back to where it was before the pandemic or whether they’ll try to maintain it somewhere around its current size (relatively enormous compared to the past). Any information on that would be appreciated, too.

BoC Gov. Macklem and Deputy Gov. Rogers will hold a webcast press conference on the Monetary Policy Report an hour after the release of the results of the meeting. (You can watch it in the comfort of your own home using the link.) If nothing concrete is said about the balance sheet in the statement, I’d expect it to be a major point of discussion in the press conference. But when listening to any central banker, we should remember those famous words of former Fed Chair Alan Greenspan: I guess I should warn you, if I turn out to be particularly clear, you’ve probably misunderstood what I’ve said.

The Fed: look out above!

The Fed has shown that it’s planning on tightening policy this year. Their latest “dot plot” for the year showed three rates hikes and in November the Committee doubled the pace of tapering down its bond purchases to finish by March, a clear sign that it wants to start hiking rates ASAP. (It has said previously that it wouldn’t start hiking rates until it had ended its bond purchases.)

The market expects rate hikes to start in March. There’s a lot of uncertainty about how many hikes there’ll be during the year, but investors think the most likely scenario is five or more, in contrast to the three that the Committee members predicted. 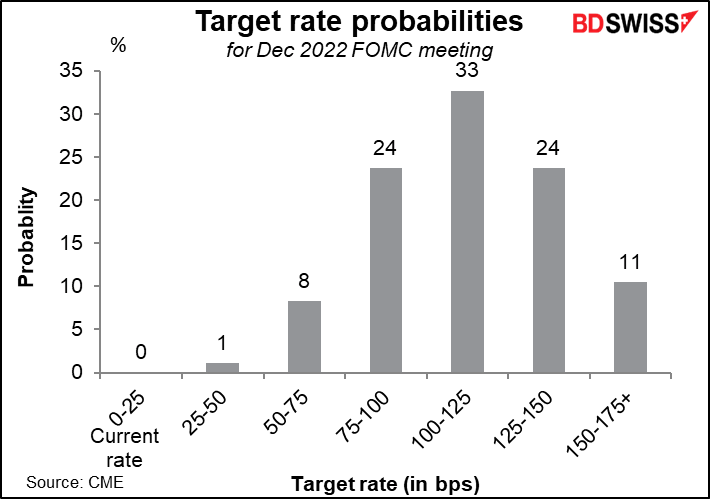 At this meeting, the market will be looking for answers to several questions:

I don’t expect any answers to these questions this month, because central bankers always like to keep their flexibility. However, I think they’re likely to tinker with the statement to signal an impending hike. For example, in September last year they said, “If progress continues broadly as expected, the Committee judges that a moderation in the pace of asset purchases may soon be warranted.” They then began tapering down their bond purchases at the next meeting. This time, they might replace the sentence “The Committee would be prepared to adjust the stance of monetary policy as appropriate if risks emerge…” with something like “if labor market progress continues broadly as expected, the Committee judges that an increase in the federal funds rate may soon be warranted.”

I think rather than the statement, the focus will be on Fed Chair Powell’s press conference afterward, when we can expect him to be deluged by questions on these matters. He’s not likely to commit to anything though, instead preferring to keep maximum flexibility by stressing that each meeting is “live,” meaning that they’ll cross each bridge when they come to it rather than pre-committing to any particular pace or degree of tightening. He might push back on the idea of starting out with a 50 bps hike, however.

What are the risks:  As shown above, the market is anticipating that the Fed will continue to tighten policy. It would be hard to see them out-hawking the market at this point and somehow signaling that yes, five rate hikes are reasonable, six possible. On the contrary, I think given the recent turbulence in the stock market, they’re likely to push back on market pricing and try to lower market rate expectations. Doing so might simply raise fears that they’re “behind the curve” and not willing to take the steps necessary to fight inflation. It might cause long rates to rise as investors anticipate higher inflation in the future. Or it could cause the yield curve to flatten more as investors anticipate that eventually the Fed will have to hike rates even higher to make up for this mistake.

On the other hand, a more dovish-than-expected Fed would probably prove popular with the stock market. 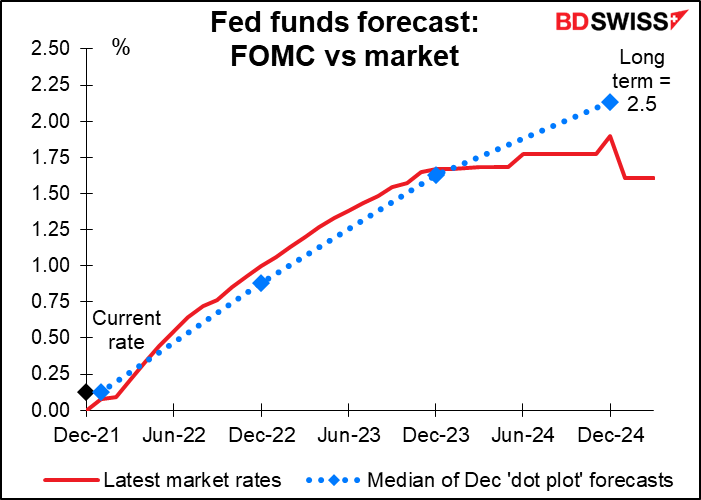 In any case though they are not likely to back off tightening. Both the President and Congress have made it clear that inflation is the #1 problem that they face politically right now. Remember, 10% of Americans own 89% of the stocks while 90% own only 11%. Inflation hits a lot more people directly than a fall in the stock market does.

The market is not likely to react that much to indicators while waiting for these events, particularly the Fed meeting. But I get paid by the word so let’s review the day’s indicators anyway.

Under normal circumstances the market doesn’t pay much attention to the US advance trade balance (which is just the merchandise trade balance, excluding services). Today they’re likely to pay even less attention. In any case, it’s expected to show a slightly narrowing in the deficit from November’s record trade gap. 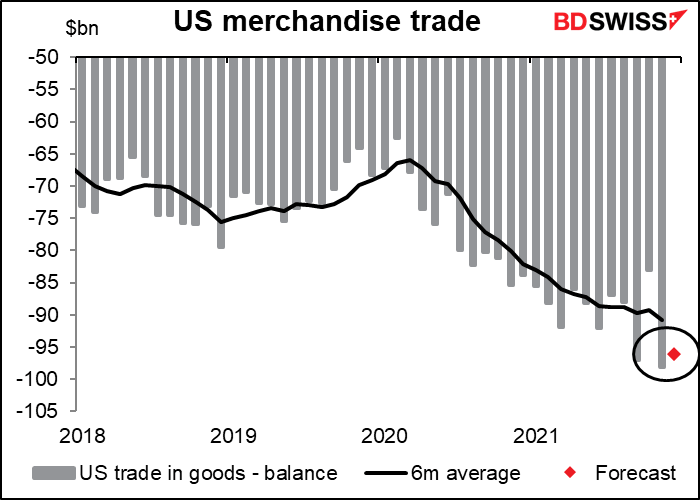 US new home sales are expected to be up 2.8% mom. This compares with the 4.6% decline we saw last week in existing home sales, the first decline in four months. The decline reflected both low inventories of houses for sale — the number of properties for sale was the lowest on record — plus the start of a pickup in mortgage rates. Given that prices of houses are still rising, I’d say any fall in sales is probably due more to a lack of supply than a lack of demand. Still, if houses aren’t selling, then the economy isn’t getting the boost that it usually gets when someone buys a new house, as they often buy a new refrigerator, carpets, remodel the bathroom, put in a new kitchen, etc etc. when they move. 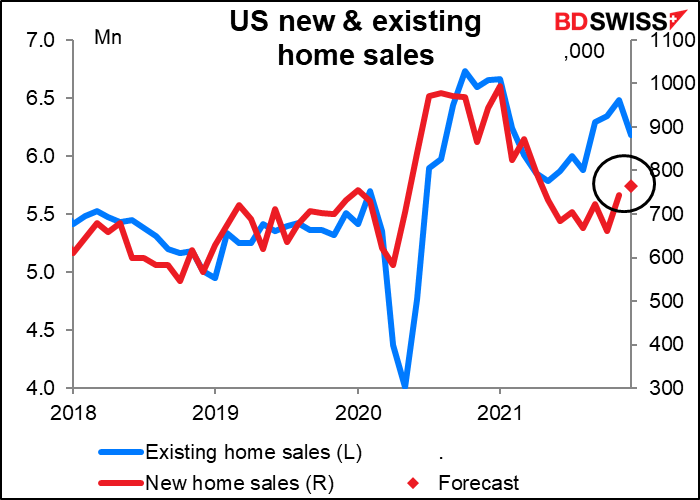 Overnight, New Zealand announces its consumer price index. It’s expected to move sharply higher (5.8% yoy vs 4.9%). This would be nearly double the upper boundary of their 1%-3% target range. That surge might not change market estimates of what the Reserve Bank of New Zealand (RBNZ) is likely to do, however. The RBNZ, which has already hiked twice so far, is already expected to hike at every meeting until October and then a 50% chance of another hike in November. So while the CPI may be modestly supportive for NZD, it’s only going to confirm what everyone already expects. 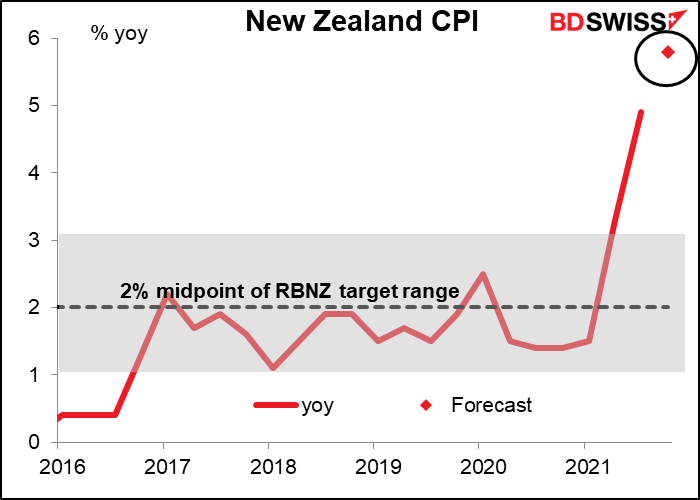 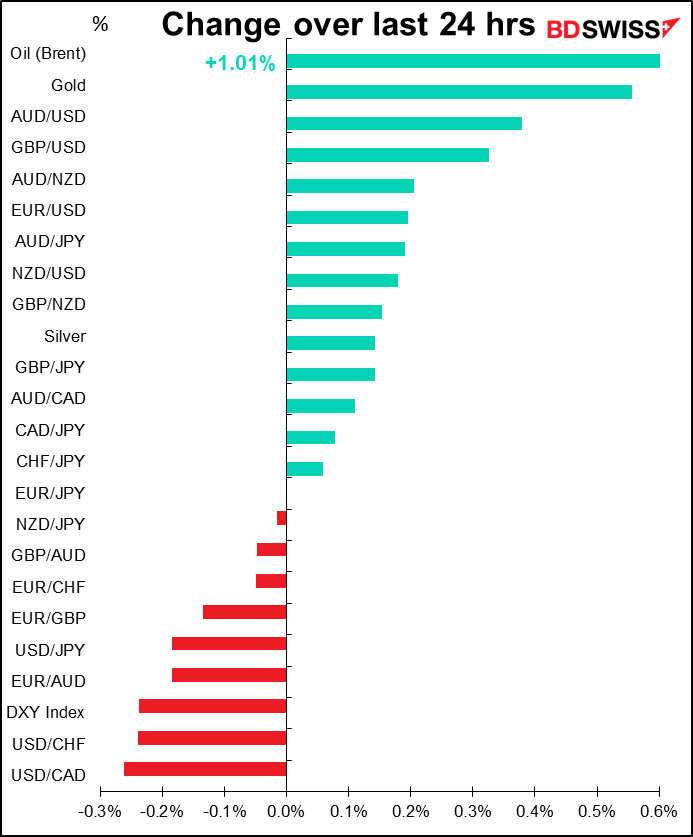