You are at:Home»Market Preview»USD Up as Powell turns Hawkish; US Durable Goods, Jobless Claims, Tokyo CPI 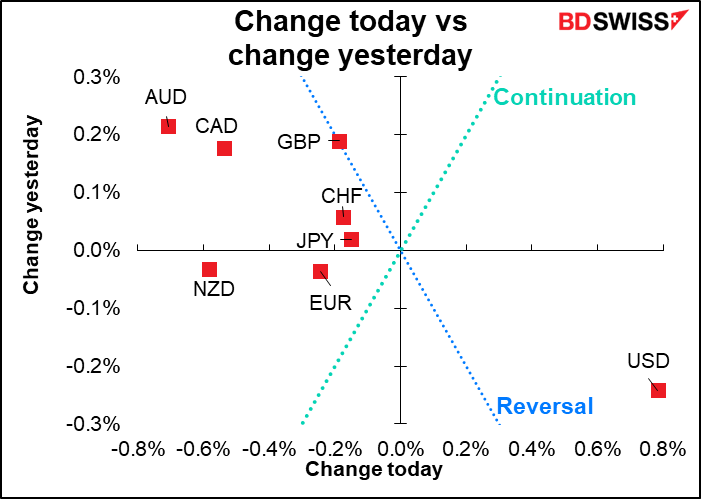 Was the Fed dovish or hawkish? Opinions seem to be mixed. One pundit on Twitter said that the statement was “Decidedly dovish.” Another said “This is the most hawkish Powell I can remember since late 2018.”

Both can be correct. The statement was relatively dovish. Their view of the economy improved markedly and they did hint at a rate hike: they said .”With inflation well above 2 percent and a strong labor market, the Committee expects it will soon be appropriate to raise the target range for the federal funds rate.” However there was no change in their forward guidance, including the phrase “The Committee would be prepared to adjust the stance of monetary policy as appropriate if risks emerge…” They didn’t commit to any timing or pace of future rate hikes.

On the other hand, Fed Chair Powell was fairly aggressive in the press conference. It can be summed up as follows:

The key statement he made was that “we fully appreciate this is a different situation than the last time the Fed raised rates.” One, inflation is much higher, unemployment much lower, and growth expectations much higher than at the start of the last hiking cycle. Last time the Fed started hiking, CPI inflation was only +0.70% yoy, the unemployment rate was 5.0%, expected GDP growth for the coming year was 2.4%, and the Fed’s balance sheet was 24.4% of GDP. Now the CPI is +7.0% yoy, the unemployment rate is 3.9%, expected growth for this year is 4.0%, and the Fed’s balance sheet is 38.2% of GDP. Accordingly, Powell did not rule out a faster pace of rate hikes or hiking in larger increments than last time because, as he said, the strong labor market gave the Fed plenty of room to tighten.

It was notable that Powell referred to inflation twice as many times in the press conference as he referred to labor. Previously he had emphasized the need for the labor market to recover before tightening, but with the CPI at 7.0% and unemployment at 3.9%, it’s clear which they see as the bigger problem, flexible average inflation targeting notwithstanding.

Last time they said they expected “that economic conditions will evolve in a manner that will warrant only gradual increases in the federal funds rate.” This time there’s no indication at all about the pace of tightening. Every meeting will be “live,” i.e. they go into each meeting with no preset ideas of what to do, look at the data, and decide accordingly. That’s probably because although tightening ought to be faster than it was the last time, the pandemic makes this an unprecedented situation that can’t be predicted using the economists’ usual tools (which in any event are pretty bad at forecasting at the best of times). 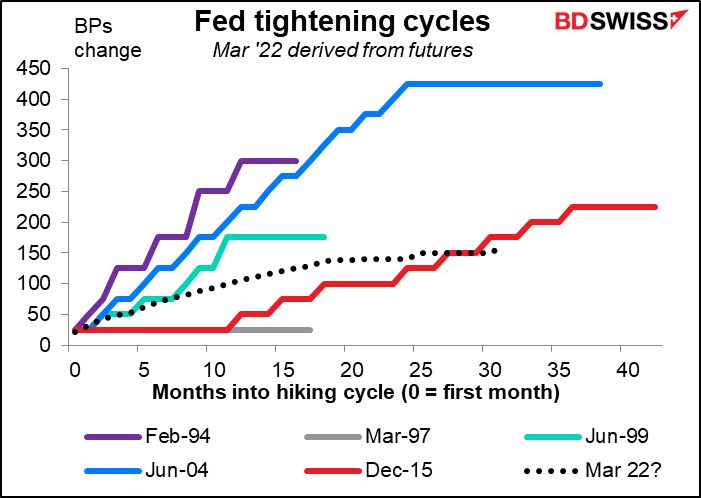 They also issued a new statement, Principles for Reducing the Size of the Federal Reserve’s Balance Sheet. It said that a) the fed funds rate, not the balance sheet, is the Fed’s primary means of adjusting monetary policy; b) they’ll start reducing the balance sheet after they start hiking rates (but no hint as to how long after); c) they’ll reduce the balance sheet “in a predictable manner” by letting bonds mature, not by selling bonds; and d) over the longer run they intend to hold primarily Treasuries, not mortgage-backed securities. This is more or less the same as last time.

In the press conference, Powell stressed that discussions about the balance sheet are still ongoing and will likely continue “at the next meeting” followed by “at least one other discussion at the meeting after that.” That means they could announce the start of quantitative tightening (QT) as early as the May 4th meeting.

The market’s verdict was: hawkish. The odds of “only” four rate hikes fell and the odds of rates going up 150 bps or more rose sharply. 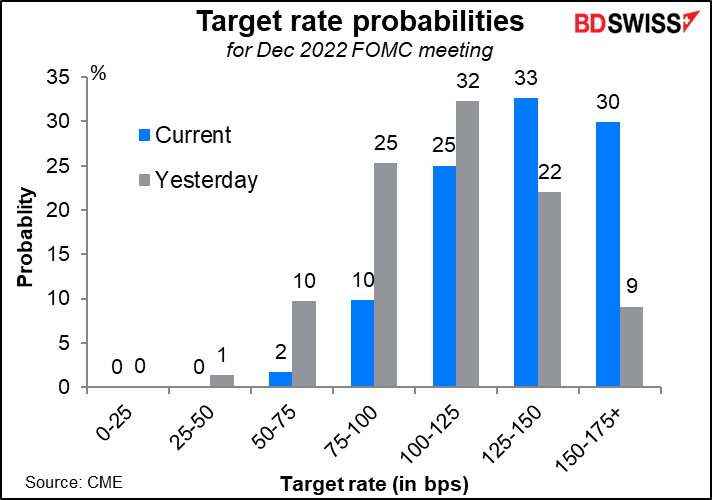 The stock market reacted quickly. The S&P 500 was up 1.5% before the statement came out and rose further to hit the day’s high at +2.2% after the statement. But it quickly came back down. The fall accelerated as Powell spoke and it finished down 0.15%. The movement was similar with the NASDAQ.

You can also see the reaction in the movement of the yield curve, which flattened notably as short rates moved sharply higher (2-year yields +16 bps vs 10-year yields +8 bps). 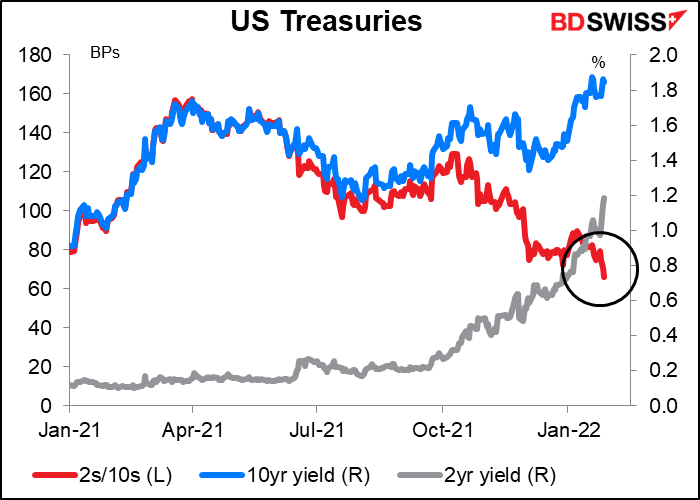 But with intimations of tighter monetary policy, inflation expectations in the US fell. Combined with higher nominal yields, that boosted real yields significantly and the dollar appreciated accordingly. This is the “monetary policy divergence” that I had expected to drive USD higher.

On the other hand, tighter US monetary policy will give other central banks cover to tighten policy themselves without necessarily causing their exchange rate to appreciate. That means tighter global monetary policy, which is bad for growth. Hence the commodity currencies did poorly.

Most Asian stock markets are down sharply this morning. I gather that’s because of margin calls going out to traders as some widely held stocks fall. This is forcing traders to sell other stocks as well to raise cash.

As for the Bank of  Canada, they surprised the market (well, me) by not hiking rates. It’s clear that they want to hike, but with the province of Ontario in lockdown – home to 38% of the country’s population — it was politically impossible. Their new forward guidance said that “overall slack in the economy is absorbed…”  and that they therefore end their pledge to hold rates at near zero. “Looking ahead, the Governing Council expects interest rates will need to increase…”

As a result the market pushed out its forecast for the pace of rate hikes but raised the ultimate endpoint, perhaps on the assumption that the BoC would have to hike further since it’s a bit behind the curve. (I have no idea what the anomaly is for October – just a glitch in the pricing, I’d guess.) I remain bullish CAD based on my bullish sentiment for the oil market. 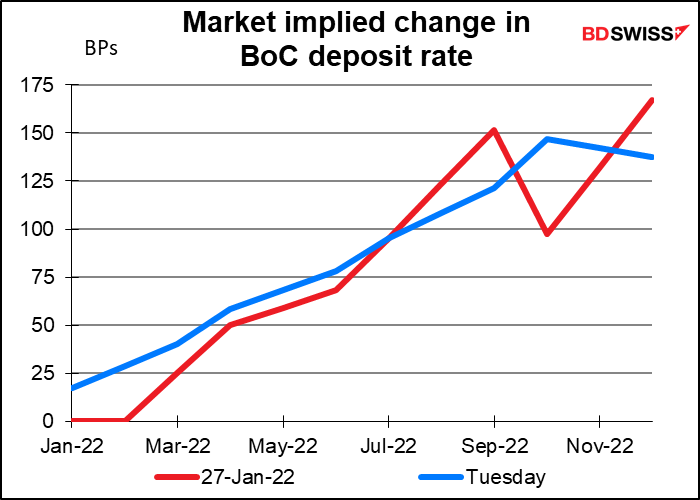 It’s amazing to me that GBP is little changed despite news that the London police department is investigating parties at the PM’s residence over possible breaches of COVID-19 lockdown regulations. This may be the ultimate judgment on PM Boorish Johnson – that the idea of him being dragged off to jail in handcuffs might be a positive for GBP. 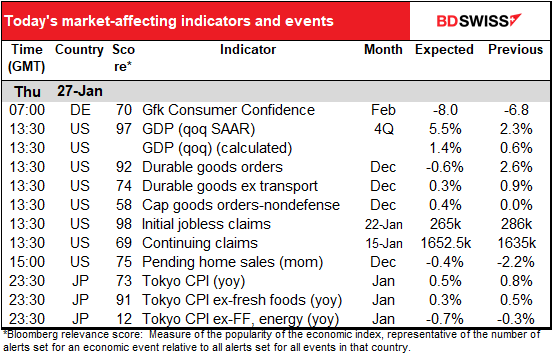 Not much going on in Indicator land during the European day, but when the US day starts, there’s a huge data dump.

The most important number here is probably the US Q4 GDP. The merchandise trade account hit a record deficit in November and retail sales were weak in December. On the other hand, business investment is strong and residential investment (new houses) is expected to be even stronger. 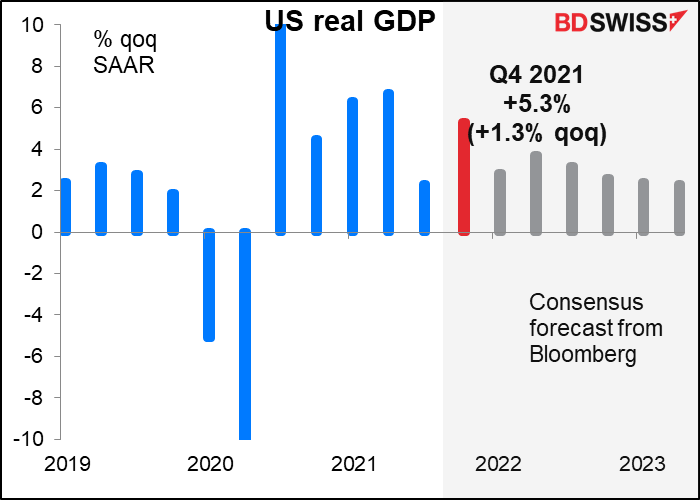 The market median estimate is 5.3%, ranging from 4.0% to 7.1%. The estimates from three of the regional Feds are in the box. The Atlanta and St. Louis Fed estimates are typical macroeconomic models with hundreds of variables in them.

The Cleveland Fed estimate on the other hand is derived from the yield curve so it can be and often is totally different from others – it shows what the current slope of the yield curve is pricing in. Nothing says that bond traders are particularly good at forecasting GDP, particularly when there’s a non-profit-maximizing buyer (the Fed) in there buying billions and billions of dollars of bonds every day, distorting the price. In fact the Cleveland estimate seems to me to be a better estimate of how mispriced the bond market currently is than it is of what growth might be.

Remember this is a qoq annualized pace of growth, which means it assumes that growth continues at the same pace for the following three quarters – a totally unrealistic assumption. I include the qoq estimate in the table above for comparison with other countries that use the sensible qoq estimate.

As usual, the market consensus level of growth is already discounting in the market. Therefore the thing to watch out for is how far the actual figure deviates from the consensus forecasts. I think the downside risk from the figure is greater than the upside risk. That is, the market reaction is likely to be greater if the figure misses estimates than if it beats estimates, because a weak figure could mean that the Fed might not tighten as rapidly as expected. But with the market already anticipating five or more rate hikes this year, it’s hard to imagine a GDP figure so strong as to make people increase their estimates of Fed tightening.

US durable goods orders are expected to fall from the previous month. 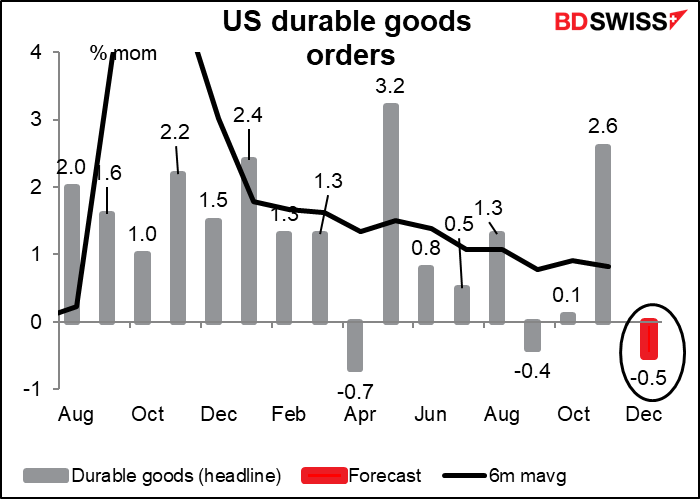 But that seems to be payback from the previous month’s 34% mom increase in aircraft orders, which naturally isn’t repeated every month. Excluding transport orders, they’re expected to be up a still-healthy 0.3% mom, below the six-month moving average of +0.6% mom but still positive. But I suspect more attention will be paid to the business investment component of the GDP figures rather than this data point. 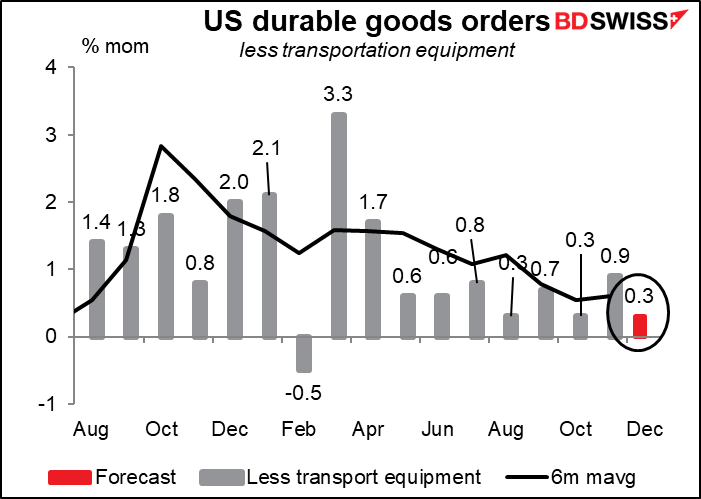 Meanwhile, the volatile initial jobless claims were up 55k last week; this week they’re expected to lose half that gain and be down 26k. Does anyone really have any idea? The employment situation is so abnormal nowadays, what with the virus affecting hiring & firing and climate change destroying seasonal patterns. In any event it looks like initial claims have passed their best, at least for now. In any case, during 2018-19 the series ranged from 203k-249k. As long as the series stays within that range, I’d say it was normal and had no major implications. 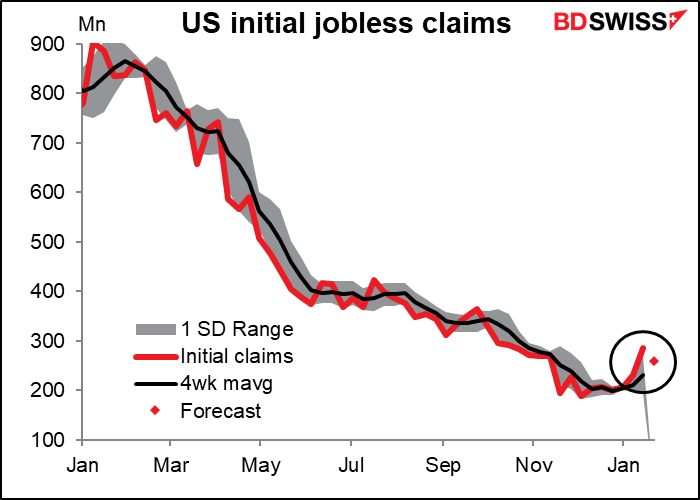 Continuing claims are expected to be up slightly, but I’m not sure anyone really cares. 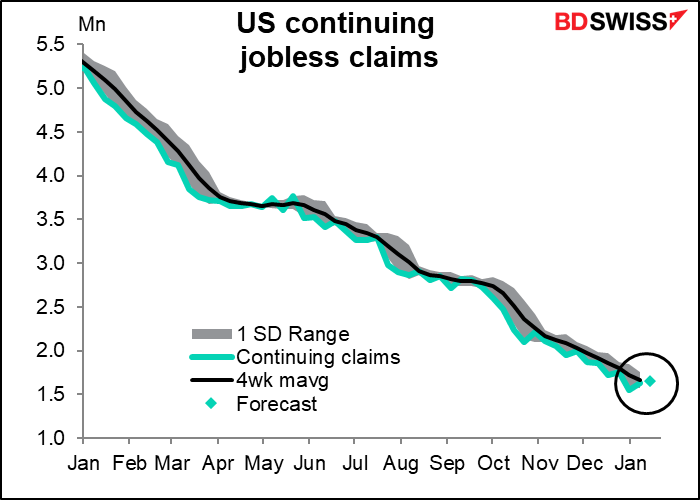 Then after that flurry of activity we can chill out for a while until the Asian day begins and the Tokyo consumer price index (CPI) hits the wires. There’s been a lot of speculation recently (well, I’ve been speculating a lot recently) about how Japan’s inflation could heat up thanks to higher prices for imported raw materials. However, last Friday’s national Japan CPI showed little sign of that – the headline CPI rose only to +0.8% yoy from +0.6%, while the “core-core” measure of inflation – excluding fresh food and energy – actually fell deeper into deflation (-0.7% yoy vs -0.6%), in part thanks to government programs that have depressed prices for hotels and mobile phone charges.

Be that as it may, the published figures do include hotels and mobile phone charges. Accordingly, all measures are expected to show a lower rate of inflation than in the previous month, with the “core-core” (not shown) particularly expected to fall to -0.7% yoy from -0.3%. I guess we can put aside thoughts of the Bank of Japan starting to normalize policy any time soon. The picture may change once the decline in mobile phone charges drops out of the year-on-year comparison, though. 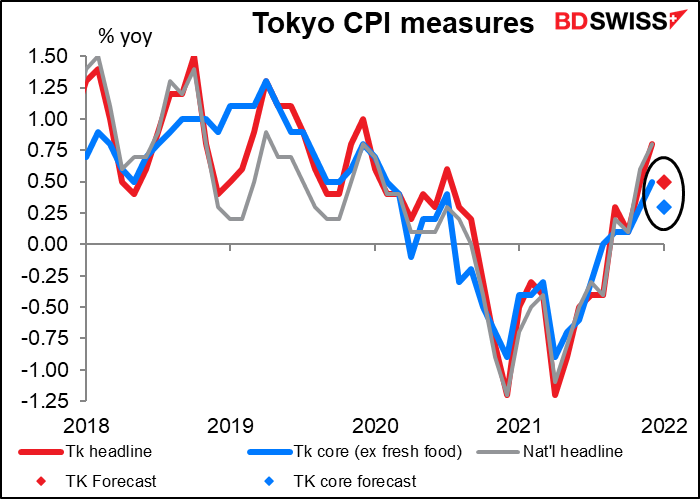 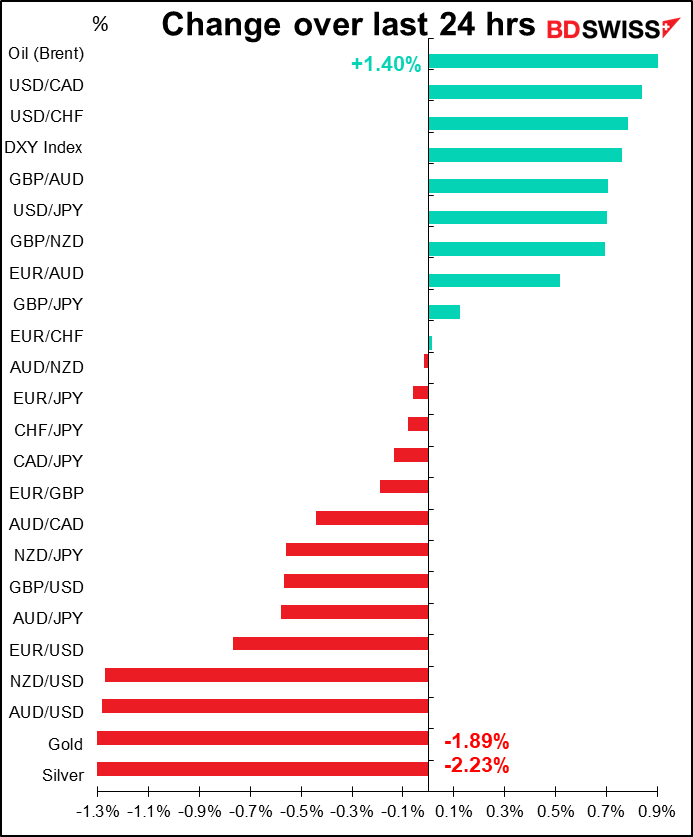