You are at:Home»Market Preview»USD continues to Push Higher on Fed sentiment; PCE deflators 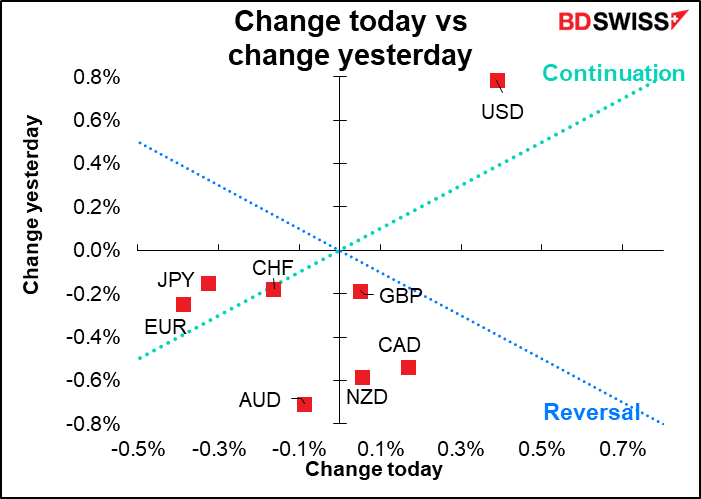 If you look at the second graph you’ll see that several of the currencies lie on or near the “continuation” line. That’s the story for today – the continuing aftermath of Wednesday’s meeting of the rate-setting Federal Open Market Committee (FOMC). The other currencies not on the line barely moved and aren’t worth talking about.

The hawkish implications of Fed Chair Powell’s press conference were amplified by a higher-than-expected US Q4 GDP figure, which came in at 6.9% qoq SAAR vs 5.5% expected. (Never mind that most of the increase was largely lthanks to inventory accumulation, which accounted for 4.9 percentage points of the increase.)

The US yield curve continued to flatten as short-term rates powered higher. Two-year yields have risen 48 bps this year whereas the 10-year has risen 32 bps.

The two-year yield rose by nearly 4 bps yesterday as interest rate markets priced in a higher likely hood of faster-than-expected tightening. The market is now pricing in the near-certainty (81% probabiilty) of back-to-back hikes in March and May, with even an increasing chance of a 50 bps hike in March alone. This would be the first time since the 1994 hiking cycle that they did two hikes back-to-back. Last time for example they hiked once in Dec. 2015 and didn’t hike again until a year later! Of course as Fed Chair Powell emphasized, with inflation at 7.0% this is hardly the same situation as in 2015, when the CPI was below target (0.7% yoy). 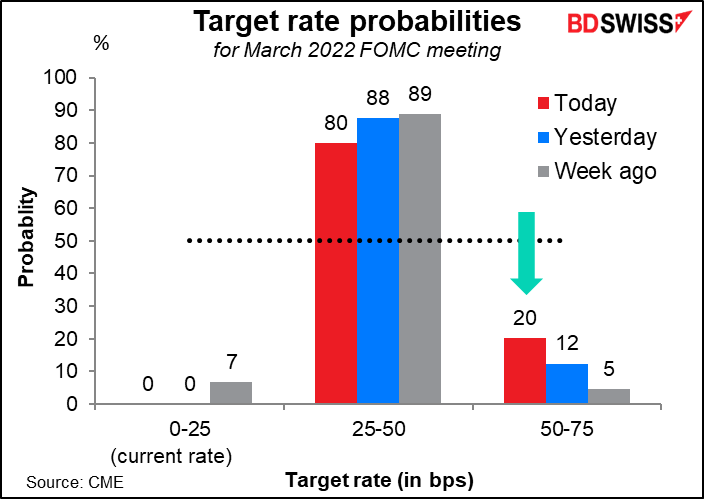 Higher rates pushed USD higher. Meanwhile, the counterpart to USD strength was EUR weakness, perhaps as people contemplated the likley stance of the European Central Bank (ECB) at next week’s meeting and how it contrasts with the Fed’s position. For example, the ECB has ruled out shinking its bond portfolio before the end of 2024, in contrast to the Fed, which will probably begin runing down its bond mountain this year. EUR/USD fell through 1.12 for the first time since late June 2020.

I’ve been so busy with the Fed and the Bank of Canada I forgot all about the Italian Presidential contest. No problem, they’re still going at it. According to Reuters, Italian PM Draghi’s chances are fading, because members of Parliament (who are the majority of the people voting, together with regional representatives) fear that if Draghi moves from PM to President that may trigger an election. The next Parliament will be elected under reforms that will cut the number of MPs to 600 from 945, meaning at least 345 MPs are guaranteed to lose their jobs if there is one – a strong incentive for them not to vote for Draghi. So far the MPs seem to be favoring re-electing outgoing President Sergio Mattarella for another seven-year term even though he’s 80 years old and has ruled himself out. I think electing anyone but Draghi would probably have little or no implications for the euro. (The only one I can think of who might is the appalling Silvio Berlusconi, but he thankfully withdrew his candidacy.) 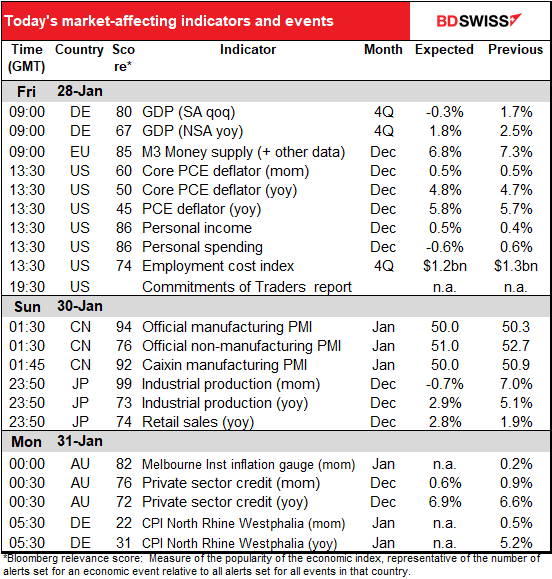 The European day starts with German Q4 GDP, or more accurately with Q4 GDP from Germany, France, and Spain, although I only pay attention to Germany. The country has already released its preliminary GDP print for 2021, which pointed to a 0.5%-1.0% contraction during the quarter. It’s surprising then that the market consensus is for a smaller contraction of only 0.3%. France’s Q4 GDP by the way is expected to be +0.5% qoq and Spain, +1.4% qoq, so it looks as if Eurozone growth as a whole may be positive even if Germany is negative – perhaps reflecting Germany’s dependence on external demand. Then the European Central Bank (ECB) releases its now-irrelevant money supply data, which only a few hardcore economist types will pour over. But the bank lending figures may have some impact on policy. Bank lending has been recovering steady, with non-financial companies accounting for more and more of the borrowing, which is just what they want. 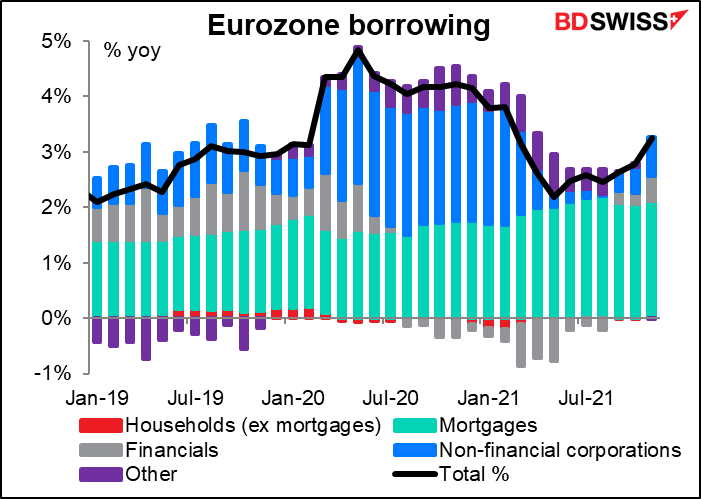 When the US comes in, we get the US personal income and spending data, which also brings with it the personal consumption expenditure (PCE) deflators.

The PCE deflators, not the consumer price index (CPI) are the Fed’s preferred inflation gauges. However the market seems to pay more attention to the CPI as shown by the relatively low Bloomberg relevance score for the PCE deflators (60.1 is the highest, vs 96.1 for the CPI). In any case, the PCE deflators show much better correlation with the subsequent movement of the exchange rate than the personal income & spending figures do. The former are therefore the ones that FX market participants should watch.

The PCE deflators are expected to rise further, based on increases in health care costs in the producer price index as well as other components of the CPI that rose (the December CPI rose to 7.0% yoy from 6.8%). A further rise in the Fed’s preferred inflation gauge, core PCE deflator, to the highest level in nearly 40 years (5.1% in Sep. 1983) should cement the case for a hike in interest rates at the March meeting, assuming of course that the stock market doesn’t melt down before then. 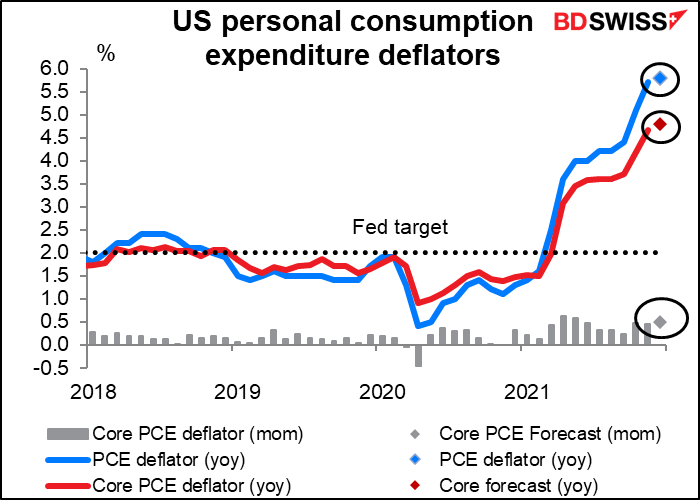 Meanwhile, incomes are expected to be up (just barely) but spending to be down by much more. Don’t feel too bad for the average American though. On these forecasts, incomes would be 10.7% above their pre-pandemic level… 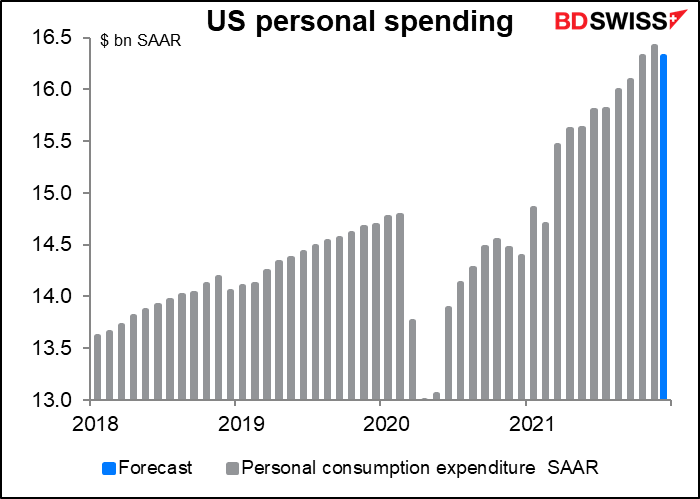 These data too showing a healthy level of incomes for the US would also allow the Fed to be more aggressive in tightening and therefore be positive for the dollar.

The employment cost index (ECI) is a quarterly indicator that I had stopped covering because it doesn’t seem to be that important for the FX market. However I’ve decided to resume covering it because inflation is the big concern nowadays and wage costs are a big part of the inflation picture. But wages aren’t everything; there are other costs associated with employing someone, such as insurance, payroll taxes, training costs, etc. Those are all wrapped up in the ECI.

The ECI is expected to show employment costs rising at a faster pace than before. The forecast 4.4% yoy increase would be the fastest pace in the 20-year history of this series. 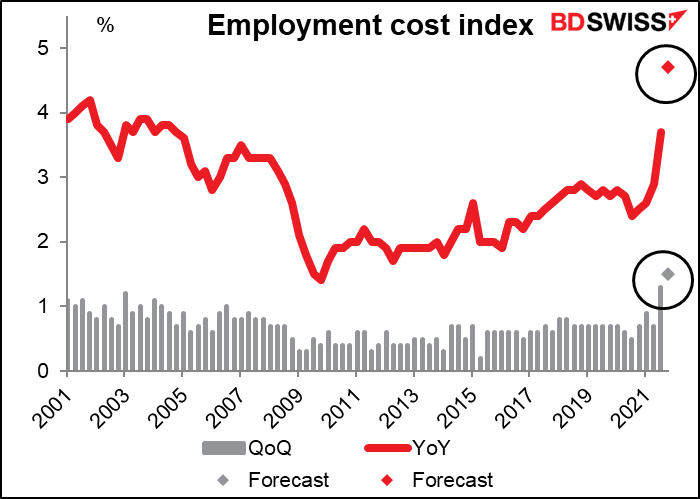 That may sound bad, but remember that the forecast for today’s PCE deflator is 5.8% a  year, meaning that people are still losing purchasing power after all is said and done. Nonetheless the rise in the ECI could raise fears of a wage/price spiral, or it could confirm to the Fed that employees are finally – finally! – making up some lost ground and they should let the economy run hot for some time. I think as long as the ECI is lower than the PCE deflator, no one is going to be too troubled. Then we can kick back and relax and enjoy the weekend, perhaps take a look at the Commitments of Traders report when it comes out.

Late Sunday night European time, or early Monday in Asia, China announces the official purchasing managers’ indices (PMIs) while Markit announces their version of the manufacturing PMI. They’re all expected to be clustered around the 50 “boom-or-bust” line. (In fact I spent a few minutes trying to figure out what the problem was with Excel that I couldn’t see all the dots before I realized it was just because they’re on top of each other.) The service sector is expected to show a partiuclarly big drop, no doubt caused by the lockdowns the government has imposed to come to stave off the pandemic. 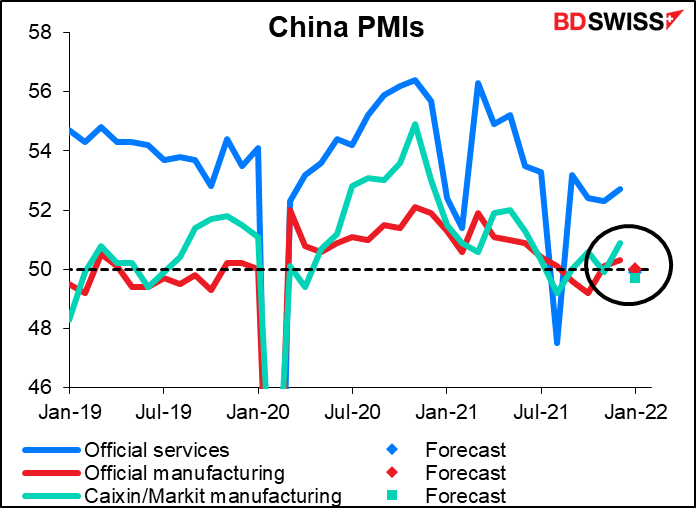 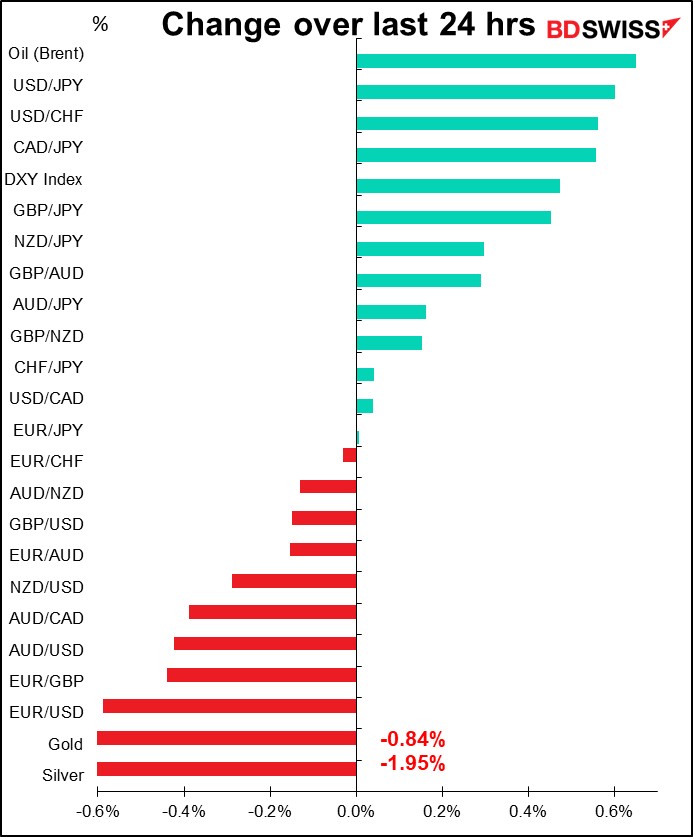