You are at:Home»Market Preview»Commodity Currencies Recover as Russia Contagion Fades; busy day ahead 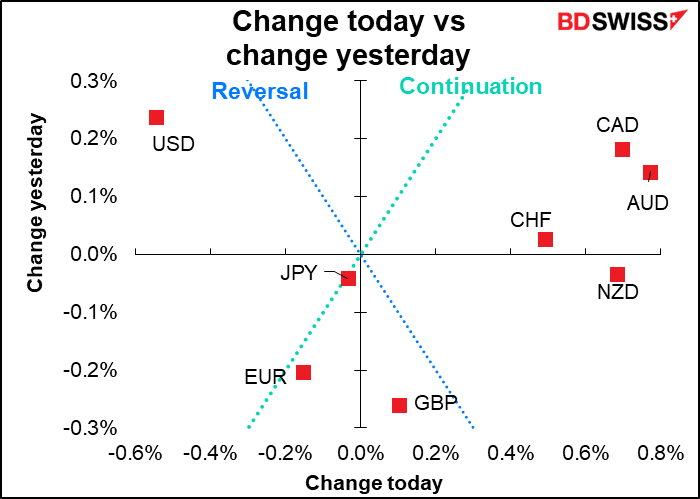 The sanctions began to bite in Russia yesterday but the impact elsewhere in the world was remarkably mild, probably because the sanctions seem to be carving out an exception for the country’s energy exports and therefore are likely to affect the rest of the world by less than expected. We’ll have to see what the G7 finance ministers and central bankers decide later today (see below).

RUB collapsed, but then recovered somewhat – it was down 30% at one point but then started to recover after the Central Bank of Russia (CBR) more than doubled its key rate to 20% from 9.5%. Nonetheless the quote on Bloomberg this morning is 15% below Friday’s level. Bad but not the disaster it could’ve been. However who knows if that represents the level that the average Russian can deal at. 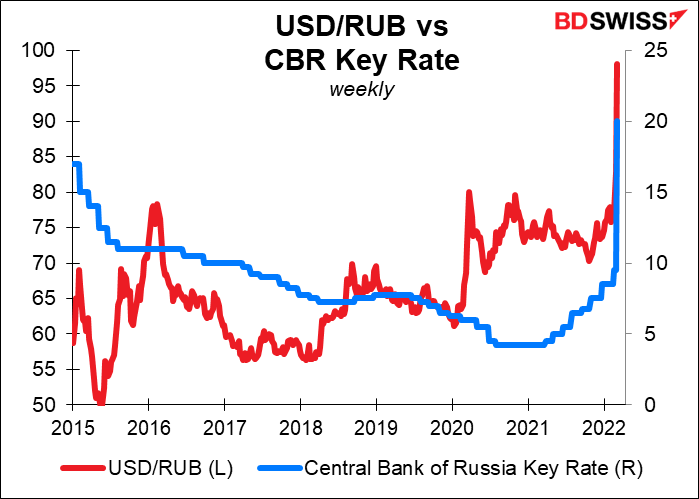 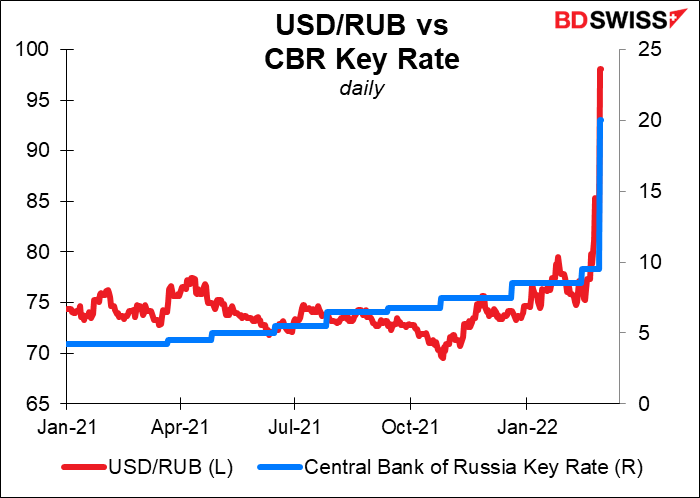 Russian oil prices collapsed too but recovered somewhat. Urals’ discount to Brent, which was around $3 a barrel a week ago, fell to $9.55/bbl before recovering to $6.00/bbl – still far, far below the 2015-2021 average of $0.88/bbl, or even the 2021 average of $1.36/bbl. That’s huge when you consider how high oil prices are and so how tight the oil market is nowadays. There’s talk that Chinese buyers may take up the Russian oil, much as they do with oil from Iran and Venezuela despite US curbs on those countries’ exports. 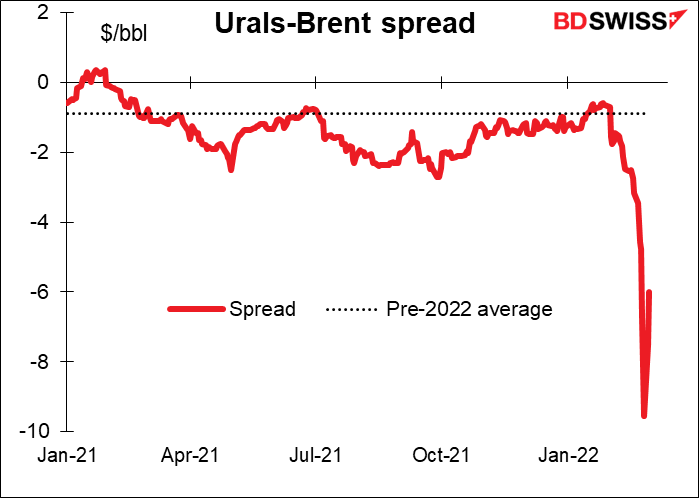 Speaking of oi, Brent was down 2.6% although WTI was up 0.83%. The US and its allies are discussing releasing another 60mn barrels of oil from the Strategic Petroleum Reserves. The International Energy Agency (IEA) will hold an extraordinary meeting today to discuss “the impact of Russia’s invasion of Ukraine on oil supply and how IEA members can play a role in stabilising energy markets.”

But remember, 60mn barrels is less than one week’s supply of Russian oil. If Russian oil simply goes to China and the other oil that China usually buys goes elsewhere, then everything is fine. Otherwise there’s no way to make up for Russia’s exclusion from the global energy market.

There was some modestly optimistic news in that the Ukrainian and Russian delegations agreed to continue peace talks even though the initial round produced nothing concrete. Another round of talks is scheduled for this week. Nevertheless these “negotiations” look to me to be pure theater. The fighting intensified and more Russian troops were reported heading toward Ukraine. Russia is now demanding Ukrainian neutrality while Ukrainian President Zelenksy is requesting “immediate accession” to EU membership. Accession usually takes years so the request may have been just symbolic or positioning for negotiations. In any event, it indicates total rejection of the Russian demands.

As the crisis intensifies, thoughts of aggressive Fed tightening continue to recede. The market now sees six or fewer rate hikes this year as most likely, vs six or more last week (seven being the most likely). This may be why the dollar weakened. 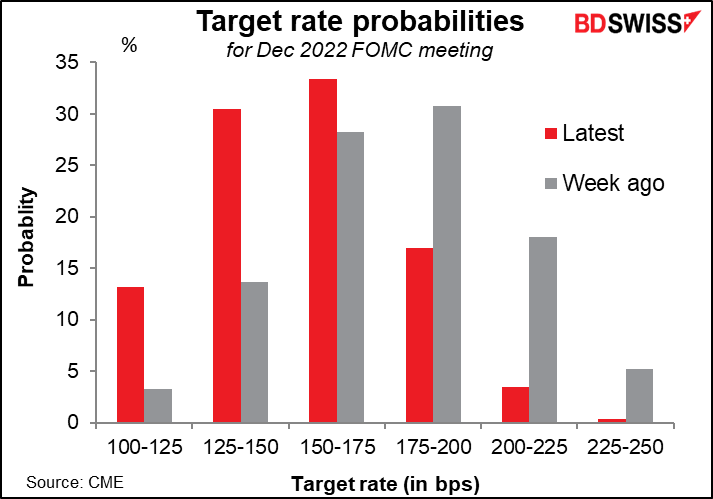 The commodity currencies on the other hand did well. Is this because of the rise in commodity prices or just because these countries are far away from Russia? 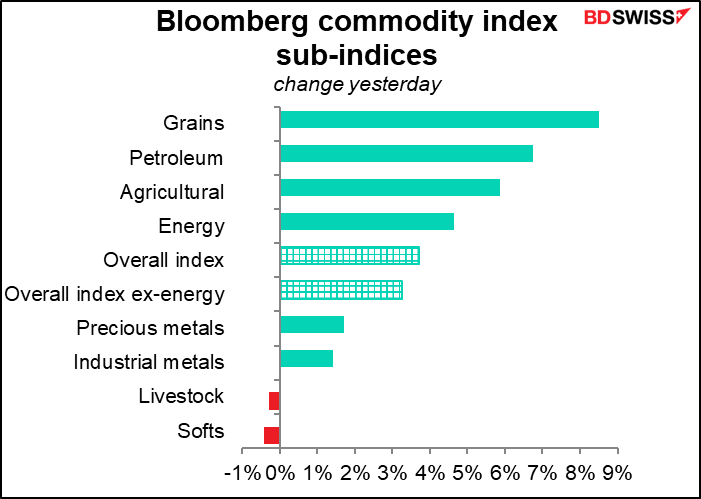 The Reserve Bank of Australia (RBA) kept rates unchanged, as expected. You might think that the strength of AUD today was related to the RBA meeting but in fact it gained steadily during the day and barely reacted after the announcement. On the contrary, although AUD/USD rose after the announcement, AUD/NZD fell, indicating perhaps some disappointment with the RBA’s continued dovish tone. AUD-negative except that I think overseas factors are more important for AUD now than domestic factors. 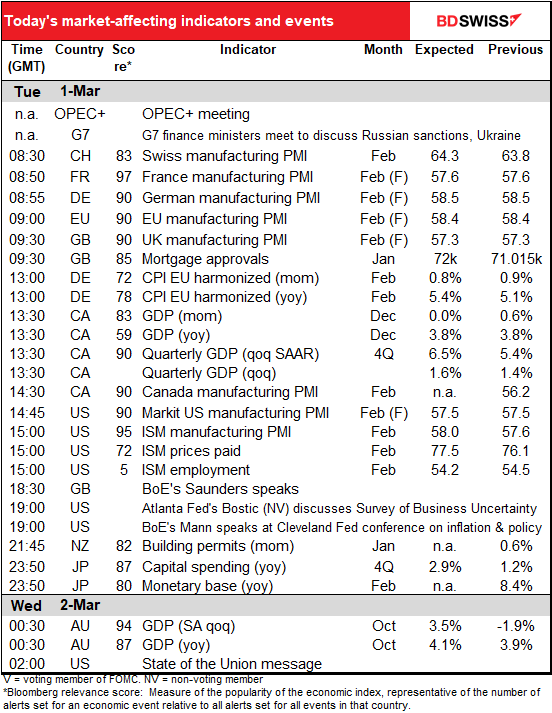 There are two meetings on the schedule for today. I don’t know what time they are.

The first one is very important: finance ministers and central bankers from the G7* will meet virtually to discuss the conflict in Ukraine and potential aid for the country. They’ll discuss the latest round of financial sanctions against Russia’s central bank and removal of key Russian commercial banks from the SWIFT financial transactions network. What they decide on these sanctions will be crucial for determining how things go. In particular, will they include or exempt energy transactions? That makes a huge difference.

(*The largest of the Western democracies: US, Japan, Germany, France, UK, Italy, and Canada, plus a representative of the EU)

The other one, maybe not so much. OPEC+ meets today to decide what to do about the group’s oil production. Oil prices being what they are, there should be little debate – they’ll probably ratify their existing agreement to increase production by 400k barrels a day (b/d). The only question is, can they manage to do it? Several producers are nearing full capacity already. 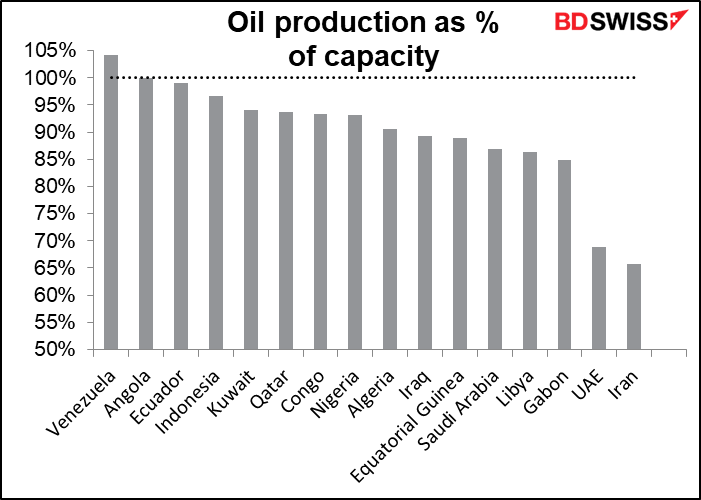 Saudi Arabia, Iran, UAE, and Iraq are the only countries that really have room to increase production significantly, and Iran (1.3mn b/d below capacity) has its own problems. The key here is the way OPEC’s quotas work: if a country can’t produce all the oil it’s allowed to, other countries aren’t allowed to make up the difference. So even though Saudi Arabia could in theory pump an additional 1.5mn b/d, it isn’t allowed to even if OPEC as a whole falls short of its planned output. 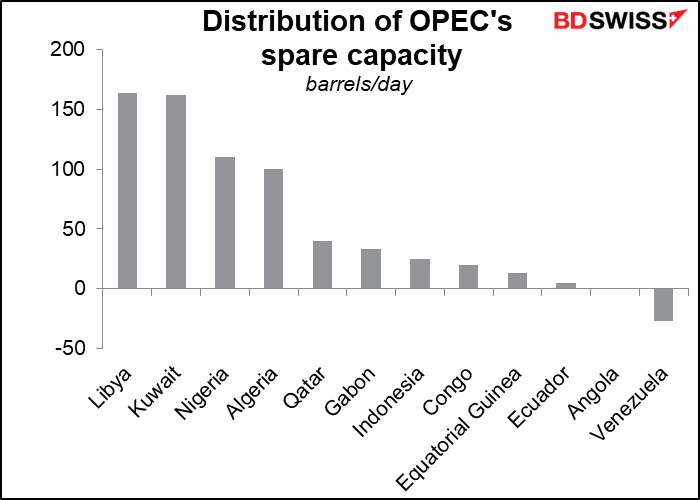 Given these technical problems, I’m not sure what the agreement will mean for the oil market, particularly as Russia, the largest producer in the group, faces daunting problems selling any of its oil thanks to the sanctions.

(OPEC+ is a loose coalition of the 13 members of the Organization of the Petroleum Exporting Countries (OPEC) and 10 other countries that are oil exporters but not members, such as Russia, Kazakhstan, and Mexico. OPEC accounts for around one-third of the world’s oil supply; the other members of OPEC+ bring it to slightly below 50%.)

As for indicators, the final manufacturing purchasing managers’ indices (PMIs) will be released, plus the one-and-only version for those countries that don’t have a preliminary. Also as usual the US Institute of Supply Management (ISM) will release its version of the index, which is closely watched in the US even though Markit makes a convincing case that its version is better.

The ISM manufacturing PMI is expected to be little changed, but what’s more worrisome is that the prices paid PMI is forecast to rise again. That could fuel thoughts of fed tightening, which would be positive for the dollar. 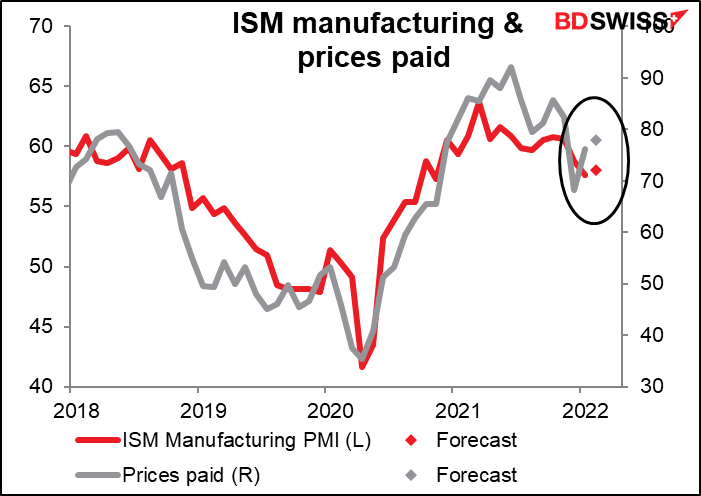 Germany’s harmonized index of consumer prices (HICP) is forecast to rise a bit. That’s bad news after last month’s EU-wide CPI blew all estimates out of the water – it was 5.1%  yoy, 70 bps above market estimates, the largest upside surprise since the Eurozone was formed. Inflation was higher than expected across countries and the details confirmed that price pressures are mounting even outside of energy and food. Now food prices are rising even more and higher energy prices are being passed along to households. 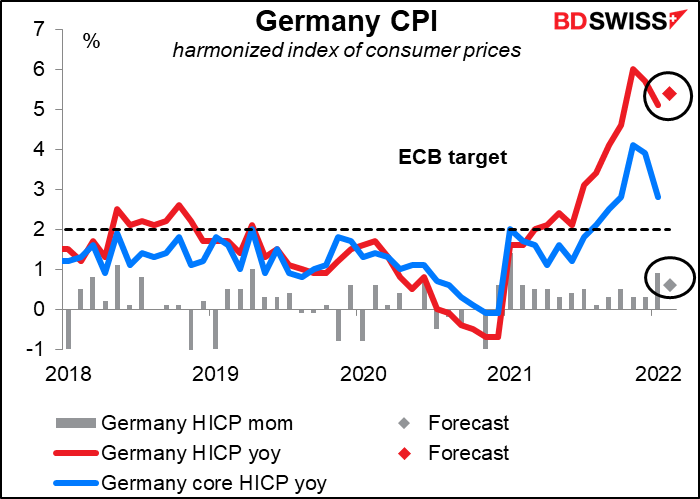 The forecast for tomorrow’s EU-wide CPI is that it should be slightly higher than Germany’s HICP (5.4% yoy vs 5.3% yoy). 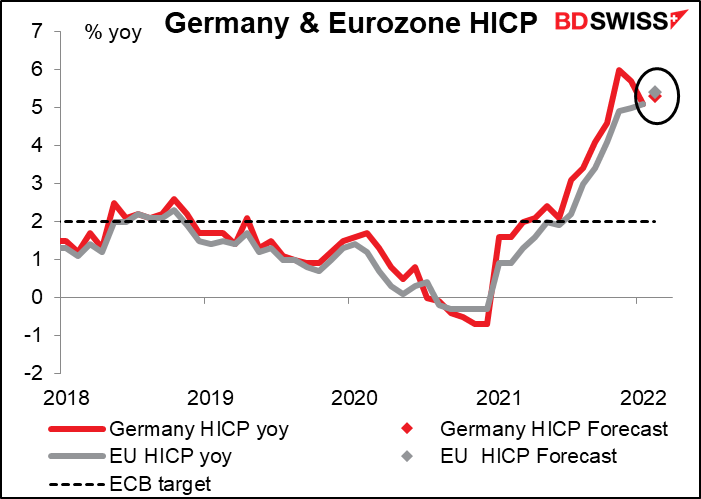 Canada’s monthly GDP for December is expected to be unchanged from the previous month. Positive contributions from manufacturing, agriculture/forestry/fishing/hunting, utilities, and wholesale may have been canceled out by declines in accommodation/food services, mining/quarrying/oil & gas extraction, and retail. 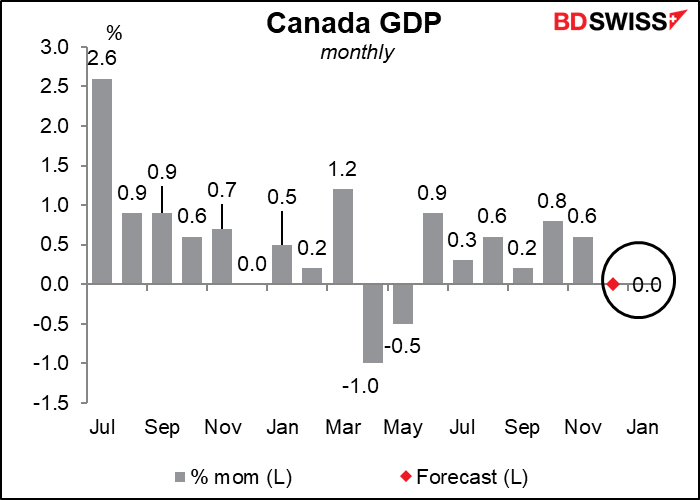 Unfortunately with growth in December probably at a standstill, the economy lacked momentum going into 2022 and Q1 2022 is currently forecast to be a much lower +1.0% qoq SAAR (+0.2% qoq). 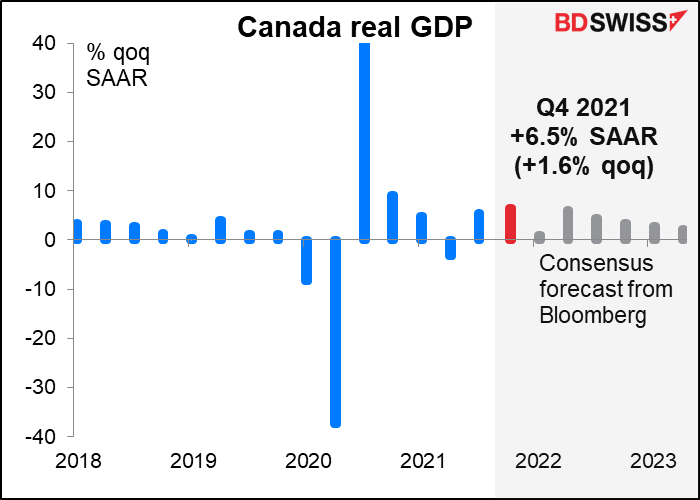 Bank of England Monetary Policy Committee members Michael Saunders and Catherine Mann speak at separate events this evening. Both voted for a 50 bps hike in rates at the last Bank of England meeting. It’ll be interesting to hear how their views have developed since then. Deputy Gov. Ramsden recently noted that the Bank’s forward guidance is that “some further modest tightening in monetary policy is likely to be appropriate in the coming months” and pointed out that “the word “modest” is significant here though.” If Saunders and Mann recant too then the market could start to rethink the likely path of UK rates. 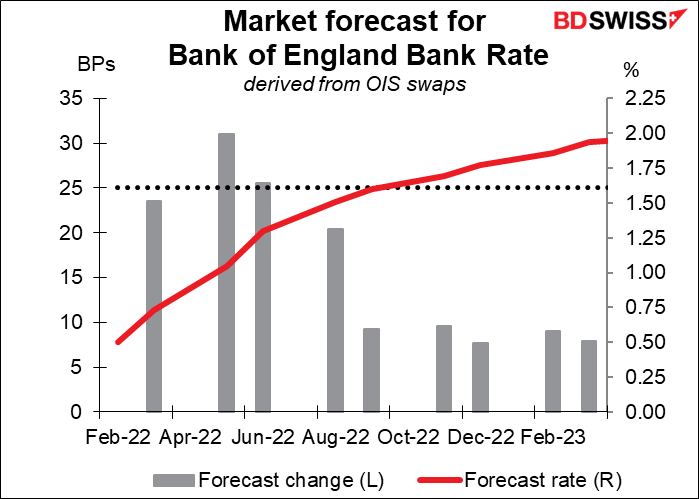 Overnight, or at 9 PM in Washington, US President Biden will deliver the annual “State of the Union” address. The State of the Union Address is an annual message that the US president delivers to Congress near the beginning of each calendar year on the current condition of the nation. In the speech, the President talks about important issues facing the country and offers his ideas on solving the nation’s problems, including suggestions for new laws and policies.

This year’s speech will probably cover the following topics:

Later, Australia also announces its Q4 GDP. The economy contracted in Q3 thanks to the COVID-19 disruptions (lockdowns in New South Wales and Victoria). But activity bounced back in Q4 as restrictions were eased. EG the Labour Force Survey reported that hours worked rose 2.4% in Q4 vs a 3.2% fall in Q3. After this the market expects steady growth from Australia, which should allow the Reserve Bank of Australia to raise rates eventually. AUD+ 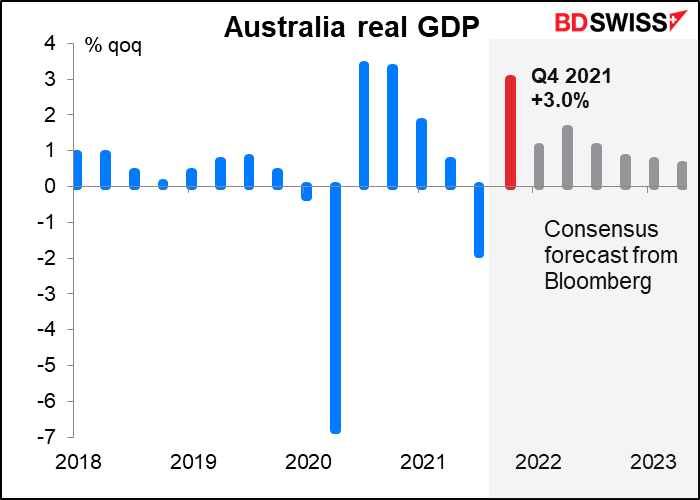 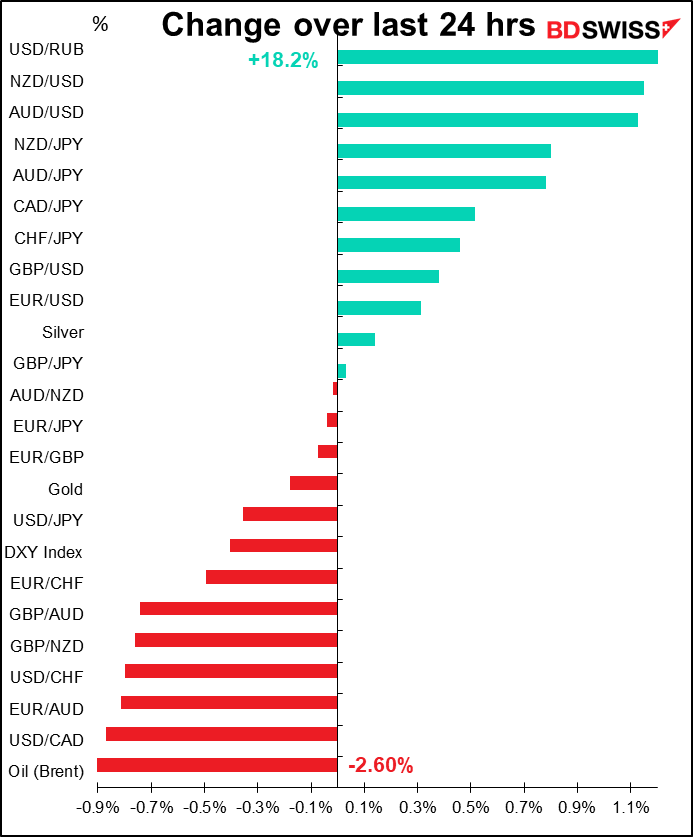