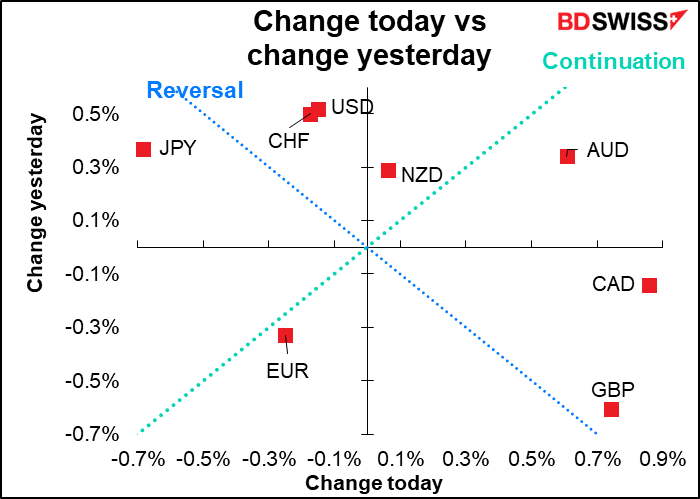 Russia’s invasion of Ukraine of course remains the focus of the market, but there are things visible in its peripheral vision too. 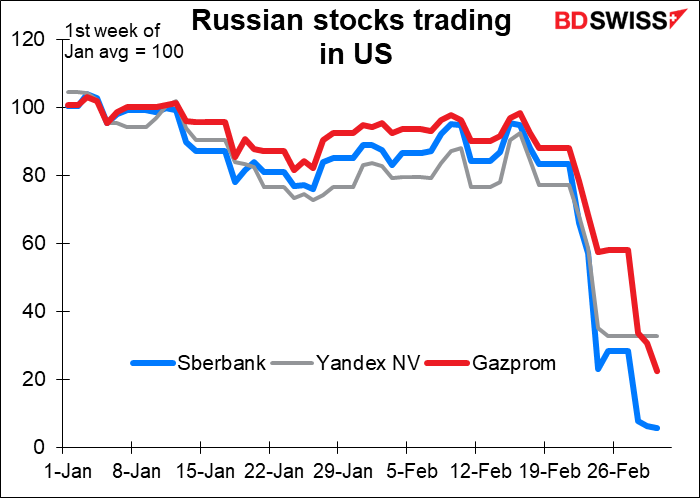 …as did bonds. This is not surprising after the Central Bank of Russia put a temporary halt on payments to foreign holders of Russian ruble-denominated stocks and bonds (I’m unsure about its USD debt) and major overseas’ settlement systems stopped accepting Russian assets. Meanwhile Moody’s and Fitch cut Russian bond ratings to junk 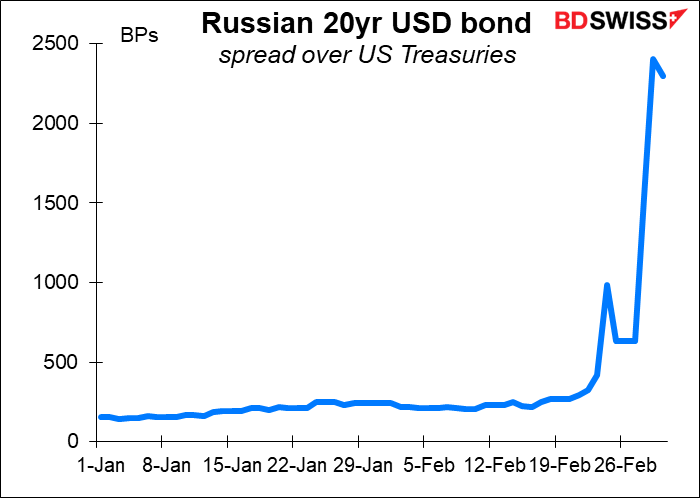 And wheat futures went limit up as it’s assumed Russian and Ukrainian wheat won’t be available this year. Ukraine is supposed to start planting corn in 30-60 days. What are the odds that farmers are out there with tractors? Russia and Ukraine together supply around 29% of the world’s wheat exports and 14%-20% of corn exports. 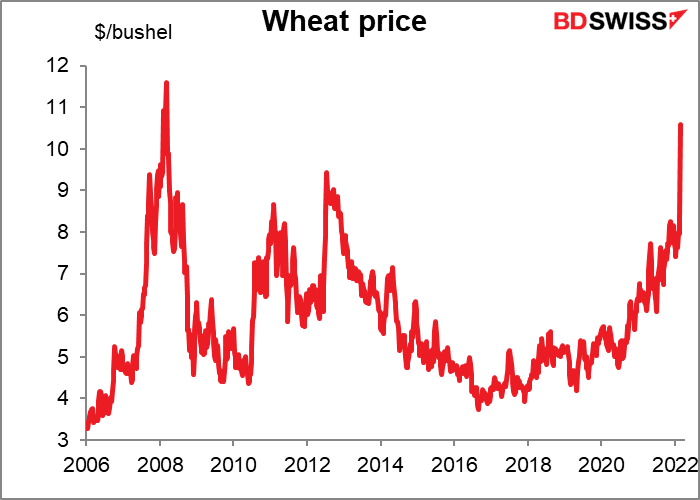 As I’ve said before, food accounts for more of most peoples’ spending than energy does and certainly has a higher weight for poorer people. It’s therefore a major concern for central banks. 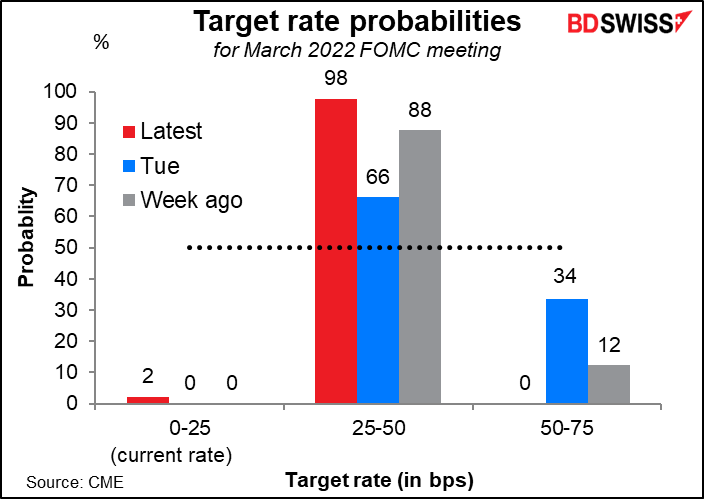 That’s only March, by the way. “We would be prepared to move more aggressively” if inflation remains high, he noted. He also said that policy may need to tighten above neutral, which he estimated would be a fed funds rate between 2%-2.5%, as opposed to simply being less accommodative. At the moment though the fed funds futures contracts aren’t forecasting that – they peak out at 2.12% in 2H 2024. 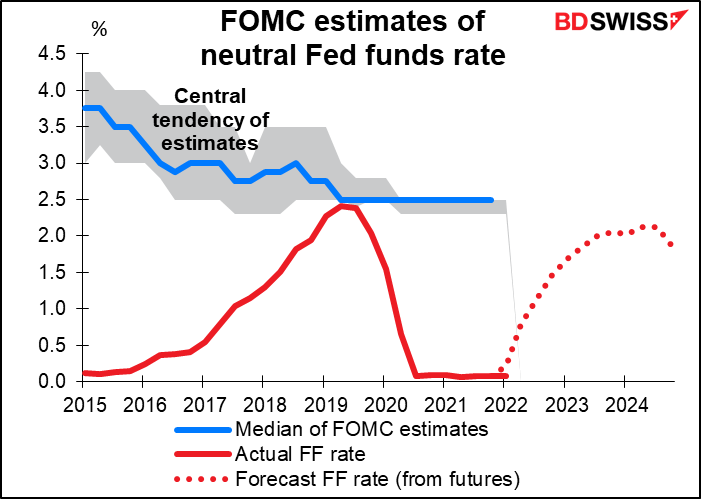 Meanwhile on Ukraine, Powell said that the “implications for the US economy are highly uncertain, and we will be monitoring the situation closely.” What else can he say?

The confirmation that they would hike at all sent bond yields back up, reversing much if not all of the previous day’s decline.

Speaking of central bankers, Bank of England Monetary Policy Committee members Michael Saunders and Catherine Mann, who both voted for a 50 bps hike at the last BoE meeting, said that still favor front-loading rate hikes. Rate expectations rose and  GBP bond yields, which on Tuesday plunged the most of the countries I track, rose the most Wednesday. This was probably what was behind the reversal in GBP too. 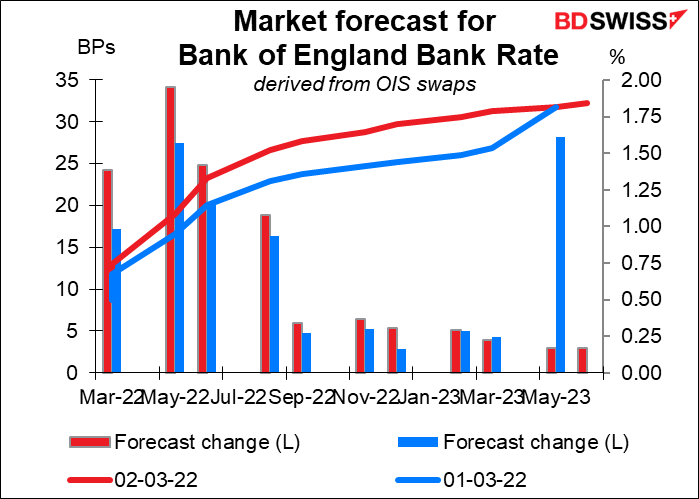 The Bank of Canada hiked rates by 25 bps, the first hike since 2018, as was universally expected. The currency’s appreciation after the meeting then was because of the Bank’s hawkish tone on inflation, which indicated that they’re likely to revise up their inflation forecast in their next Monetary Policy Review, due out at the next meeting on April 13th.

The Bank said that recent GDP data “confirms its view that economic slack has been absorbed.” That means there’s no more need for emergency-level interest rates.

Indeed, the Q4 GDP figures showed that output is back to its pre-pandemic levels in the country. 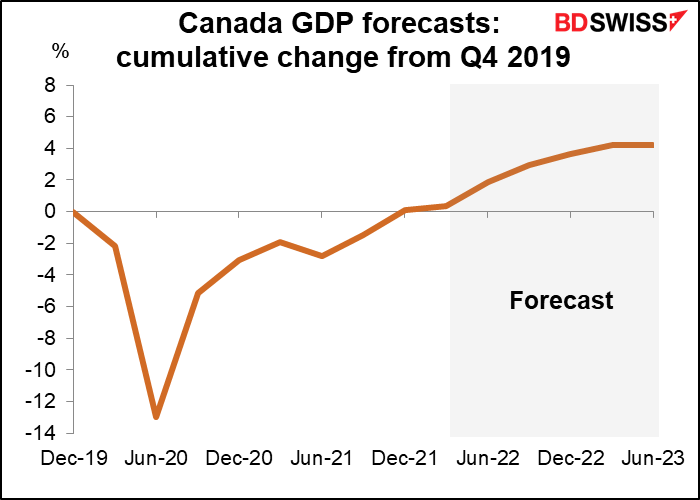 As for inflation, they said:

All told, inflation is now expected to be higher in the near term than projected in January. Persistently elevated inflation is increasing the risk that longer-run inflation expectations could drift upwards.

As a result, they said the Governing Council “expects interest rates will need to rise further” They also said they’d start thinking about when to start running down its enormous mountain of bonds on its balance sheet, i.e. starting “quantitative tightening.”

The statement validated the market’s assumption of higher rates to come in Canada and indeed increased the likelihood of a 50 bps hike at some point in the not-too-distant future. 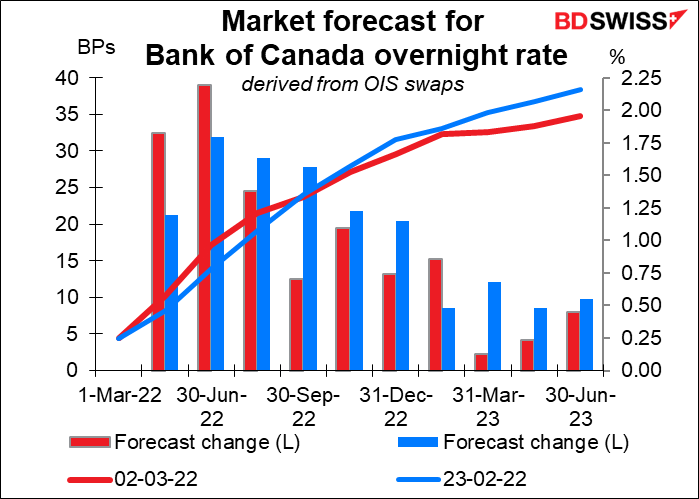 No surprise then that USD/CAD moved lower (CAD rose) following the meeting.

Meanwhile, Russian entrepreneur Alex Konanykhin has offered $1mn to whoever arrests Putin. He notes that if 1,000 other wealthy Russians also chipped in $1mn each, the bounty would reach $1bn. You can see the offer on his LinkedIn page. 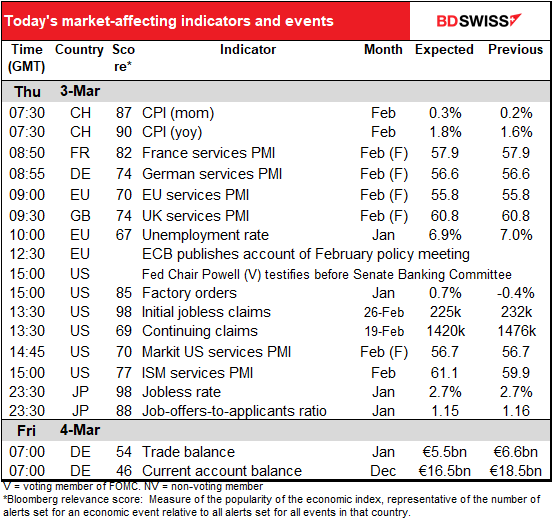 The European day kicks off with the final service-sector purchasing managers’ indices (PMIs). Any revisions here will be closely watched.

The Eurozone unemployment rate is not a big market-mover. The European Central Bank (ECB) doesn’t have a “dual mandate” and so is only concerned about inflation, not unemployment. Nonetheless it’s still significant that it’s falling as that implies the Eurozone economy is improving. 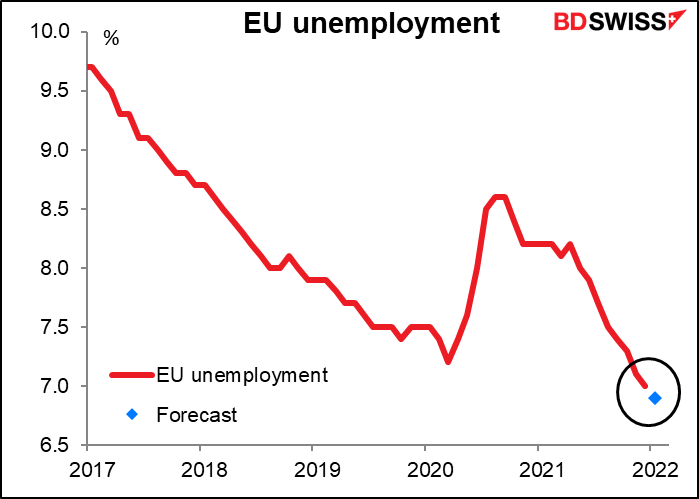 The account of the February meeting of the European Central Bank (ECB) Governing Council is old hat now, seeing as the meeting took place on Feb. 3rd, the day after the shock of the record Eurozone inflation figure (5.1% yoy) but well before the Russian invasion of Ukraine, which changed everything. The minutes are therefore likely to be quite hawkish in tone, which may not be appropriate still. The market has already unwound much of the tightening that was assumed after the CPI and the meeting. 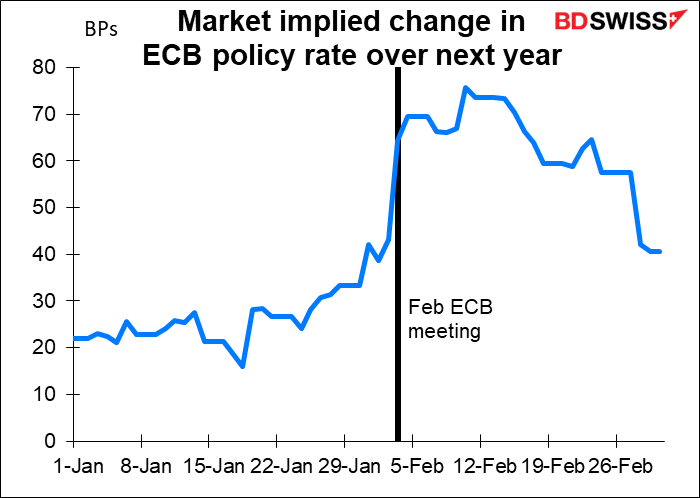 Nonetheless, the accounts will still be interesting to show what they were thinking at the time and what caused the shift to such a hawkish tone at the press conference. Also I’ll be interested to understand better the debate that they held about the sequence of how to exit from their current policies. (They’ve said they won’t hike rates until “some time” after they ended their net asset purchases, but how long is “some time”? And does everyone agree on this sequence?)

Fed Chair Powell will testify  again today, this time to the Senate Financial Services Committee. He obviously wouldn’t say anything different than what he said yesterday to the House Banking Committee but he might say more.

Initial jobless claims are expected to be down 7k following the previous week’s 17k decline. Really they’re just back to moving in the usual kind of range that they used to before the pandemic hit. In 2017 for example they ranged between 226k and 298k So far this year it’s been between 225k and 290k. I’d expect them to continue within this range for the rest of the year unless of course higher oil prices and/or Fed tightening spark a recession. 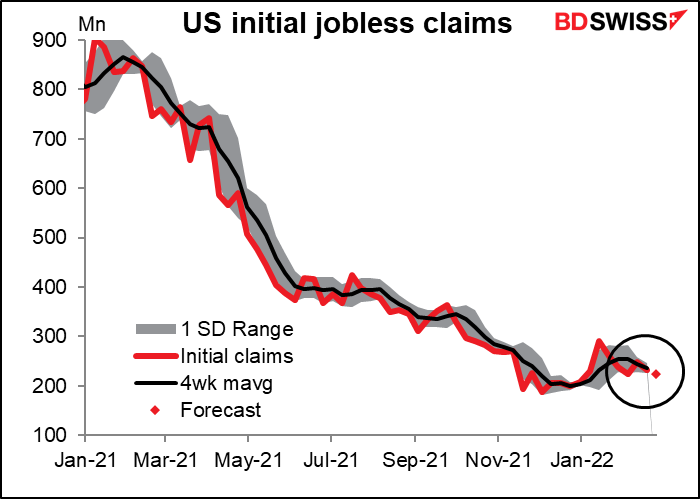 Along with the final service-sector PMIs from Markit we of course get the rival Institute of Supply Management (ISM) version of the service-sector PMI. It’s expected to be up 1.2 points, less than the 5.5-point rise in the Markit version during the month but still the same general direction. 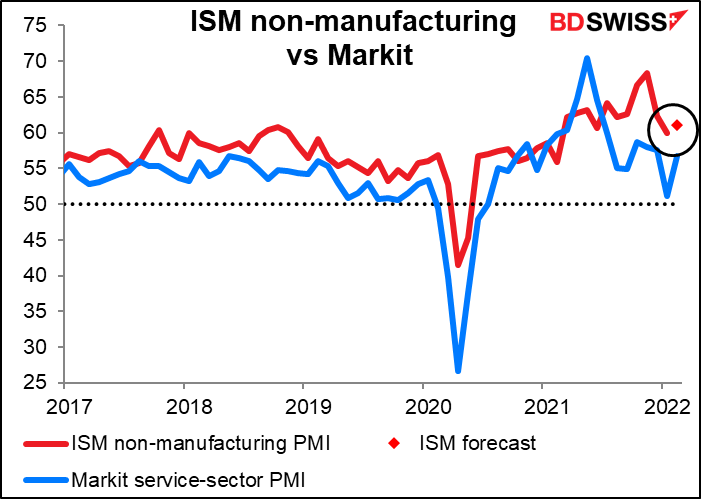 The market will also pay attention to the prices paid and employment PMIs, although there are no forecasts.  Both have started to turn down, albeit the prices paid index from a very high level. The employment PMI is more worrisome because the service sector employs far and away the bulk of the US workforce (86%). 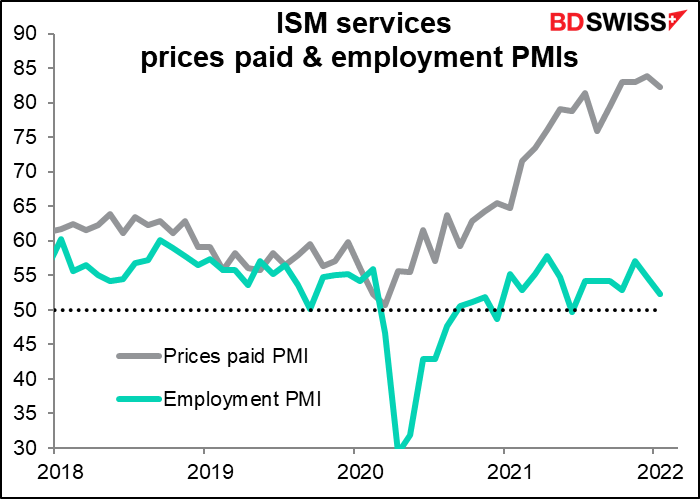 Speaking of employment, overnight we get the Japanese employment data. I’m always mystified at how high a Bloomberg relevance score this gets (98, meaning 98% of the people who set alarms for any Japanese indicators set alarms for this one). The fact is, it barely budges. This month is expected to be no exception. The unemployment rate is expected to be unchanged while the job-offers-to-applicants ratio is forecast to decline by 1 tick. Not very exciting. 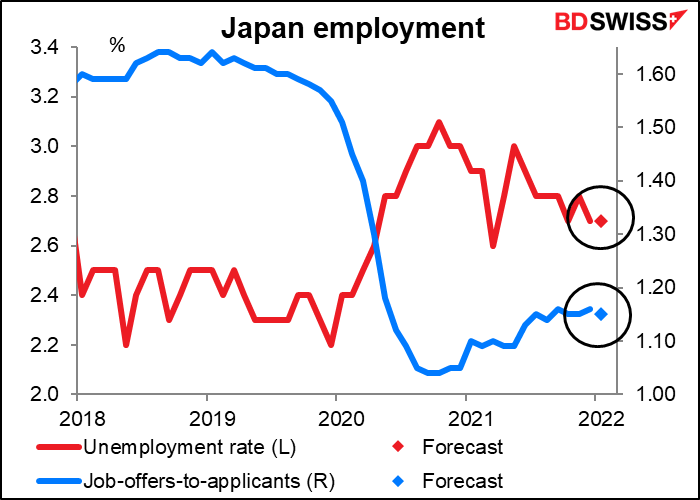 Then early tomorrow morning Germany announces its trade balance. This too has a relatively low Bloomberg relevance rating but I can’t shake the feeling that trade is relevant for FX. The trade surplus, which fell sharply last month, is expected to fall further, while the current account balance, which managed to rise last month, is forecast to fall too.

That’s because German imports are growing much faster than exports. 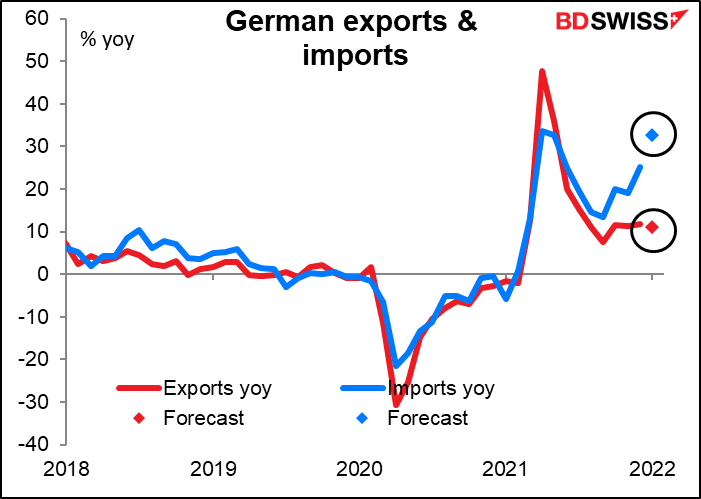 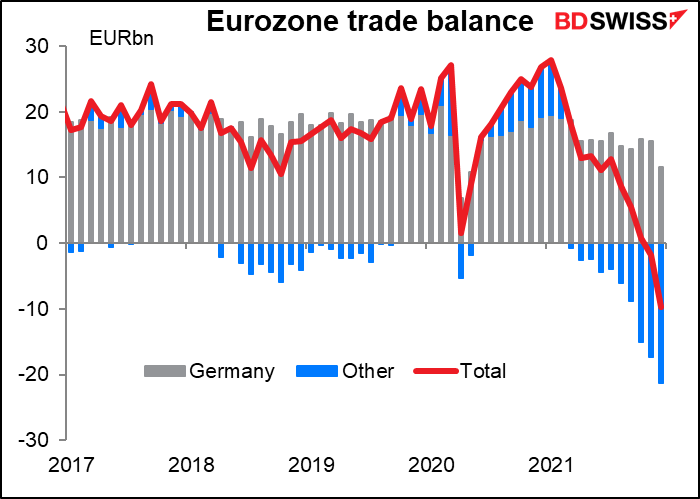 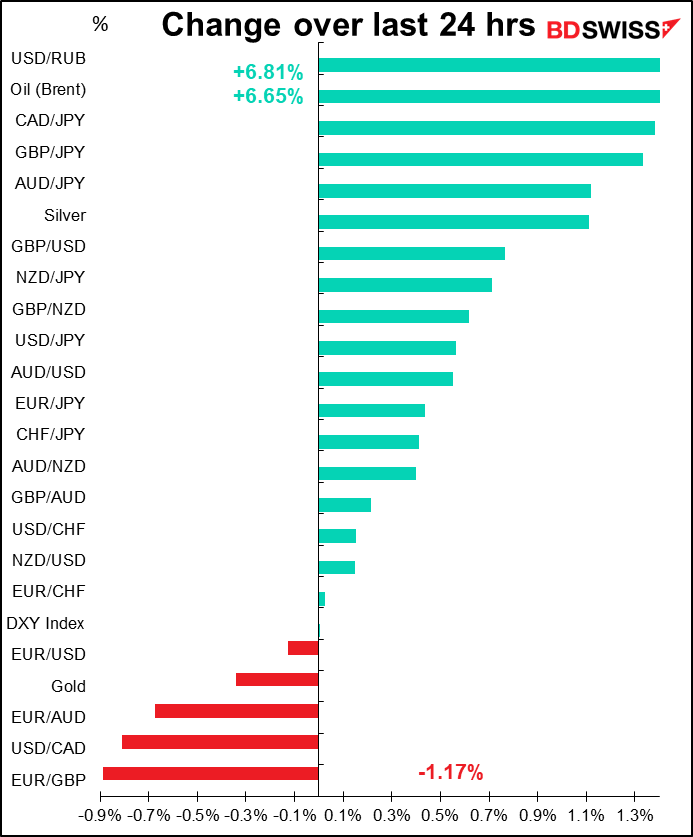