You are at:Home»MARKET PREVIEW»GBP Down as Bond Yields Collapse; ADP report, Bank of Canada meeting 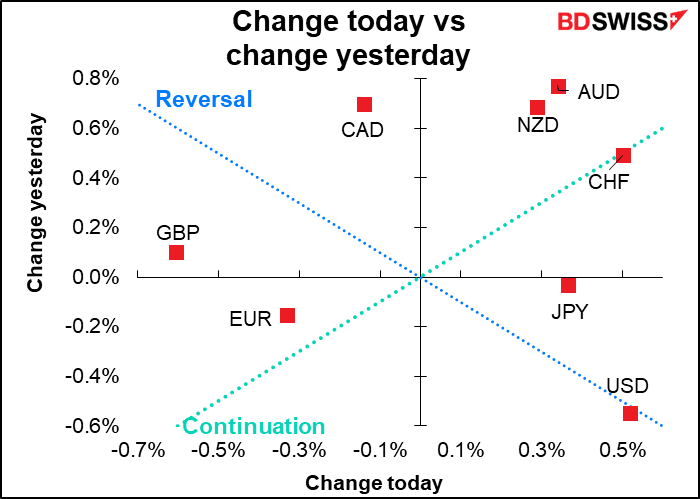 The focus yesterday was on the bond market, where we saw some of the biggest moves I’ve ever seen. The 10-year gilts yield was down 28 bps in one day!!!!

The result was a stunning decline in real yields across the board.

The two-year US breakeven inflation rate hit a record high of 4.28% 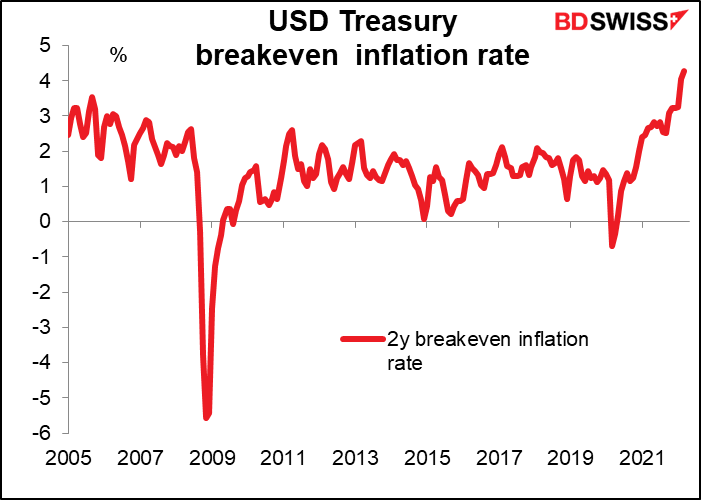 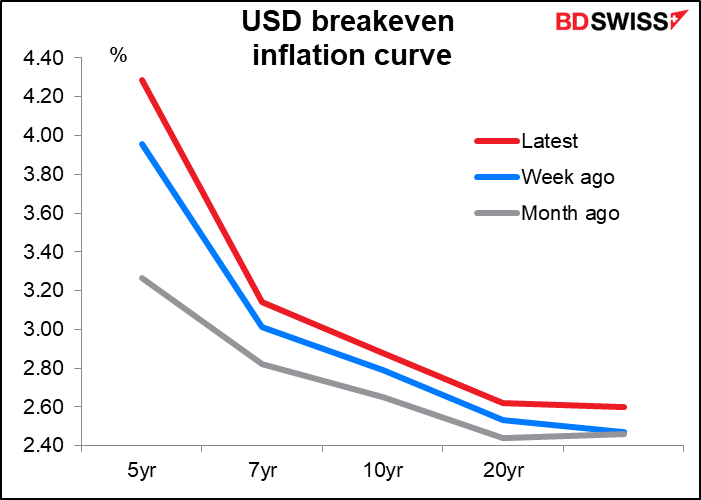 The fed funds futures for example started to price in the possibility of no rate hike at the March meeting for the first time since mid-January. Just a few weeks ago, a 50 bps hike was the consensus – now that’s given zero probability. 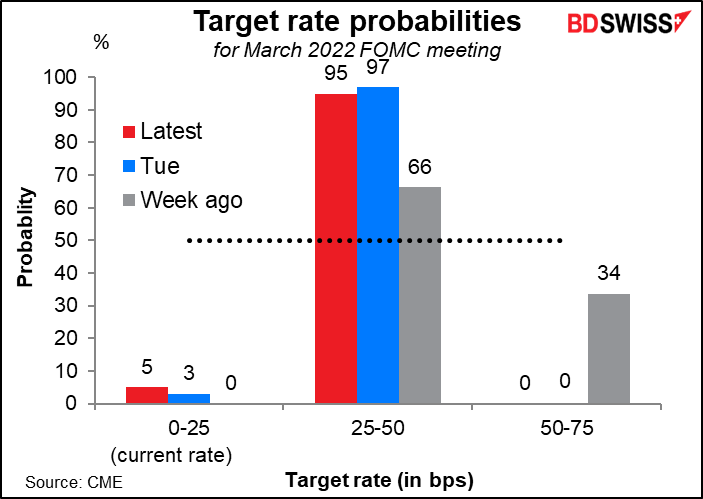 Rate expectations in the EU plummeted. The market is now pricing in only 10 bps of tightening this year, vs 40 bps just two weeks ago. This is despite Tuesday’s German consumer price index (CPI) coming in higher than expected (+5.5% yoy vs +5.4% expected, 5.1% previous).

Finnish Central Bank Governor and European Central Bank Governing Council member Olli Rehn said he thought stagflation is possible because of the war in Ukraine and the ECB should take time to properly assess the implications of the Russia-Ukraine conflict before continuing its exit from pandemic-era support as premature tightening could risk a recession. The Portuguese central bank governor, Mario Centeno, last week also said that stagflation is possible due to the invasion. Rehn’s comments though are more significant since he is usually on the side of the hawks on the ECB Governing Council. 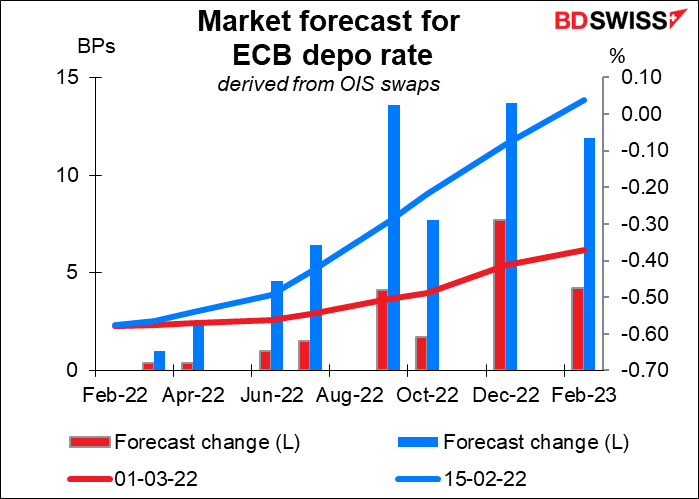 Same with Britain. The market is now just barely pricing in a 25 bps rate hike at the March 17th meeting. A little over two weeks ago it was pricing in a good chance of a 50 bps hike. 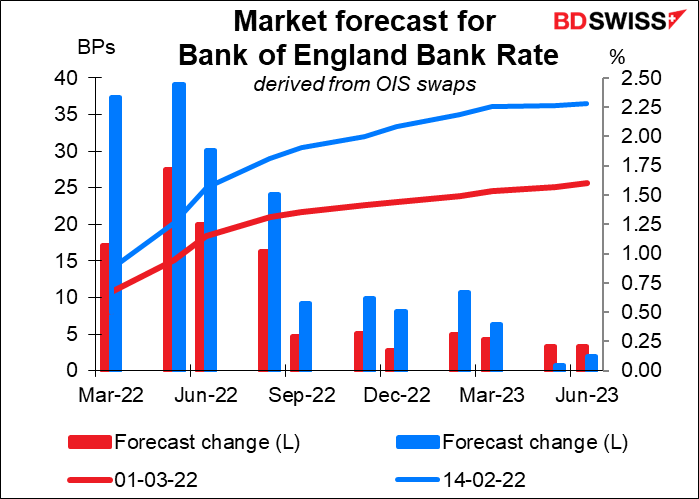 The two-year yields, which are sensitive to expectations for short-term rates, plummeted. That caused the short end of the yield curve (3m/2yr) to flatten considerably while the long end  (2yr/10yr) steepened somewhat. 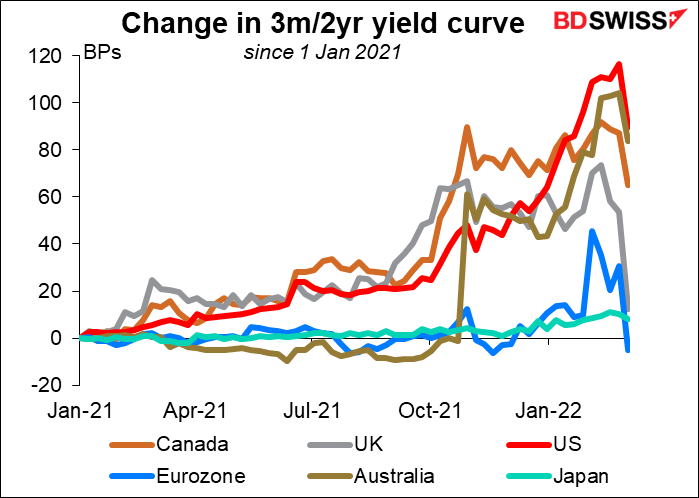 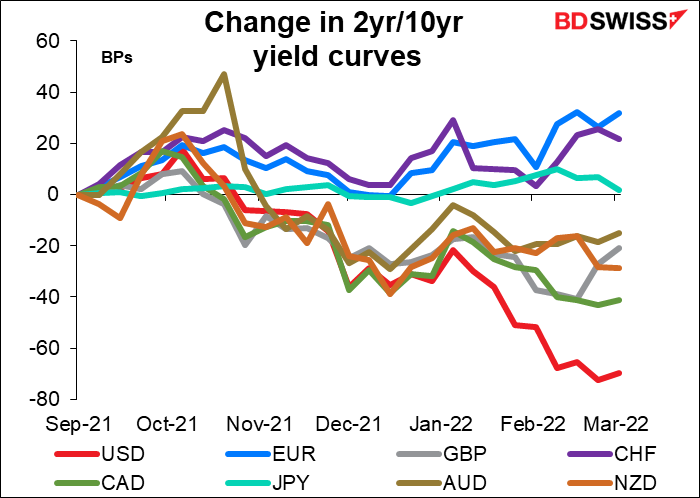 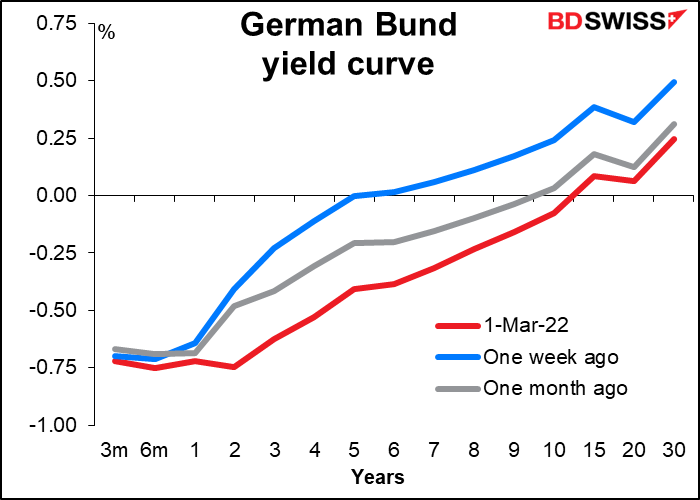 The move was due more to repricing likely ECB policy than any “flight to safety,” as shown by the fact that Italy was the best performer among the Eurozone bond markets. 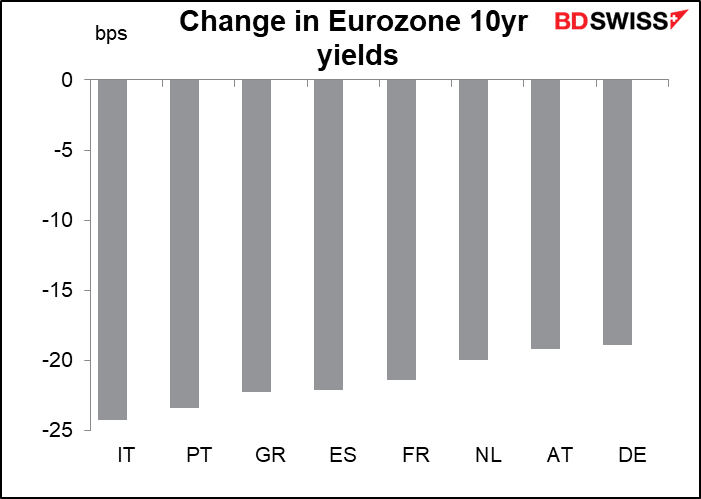 The market is starting to price in stagflation.

GBP was the worst-performing currency as UK yields – and especially UK real yields — fell the most. EUR was down because Europe is bound to be the region hardest hit by the hostilities. And the safe-haven JPY and CHF were up because, well, they’re safe havens. Note that USD was considered a safe-haven and rallied even though Fed rate hike expectations are being repriced.

CAD continues to trade on risk sentiment rather than oil, which is soaring.

The announcement from the International Energy Agency (IEA) that it would release 60mn barrels of oil from strategic petroleum reserves around the world didn’t do anything to push the price down – the US benchmark West Texas Intermediate (WTI) was up 11.1% while Europe’s Brent blend was up 9.8%. IEA Executive Director Fatih Birol said, “the situation in energy markets is very serious.”

The prompt time spread for Brent – the premium that the market is willing to pay for barrels of oil ASAP instead of in two months – has been soaring. This indicates a very tight market. 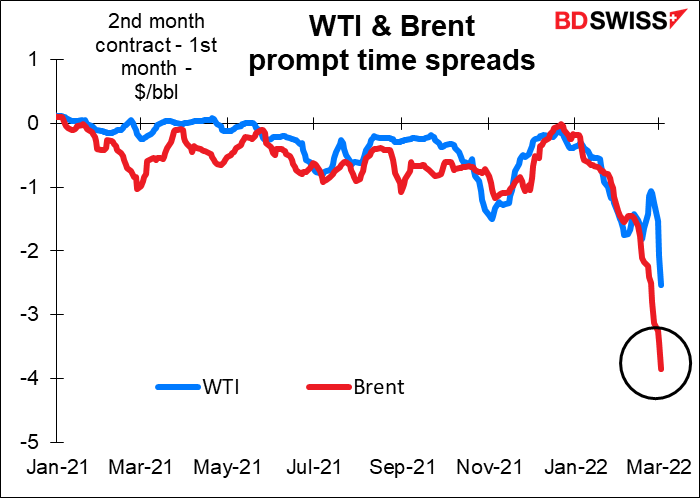 In such a tight market, Russia’s Urals crude is at a near-record discount to Brent but there are still no buyers, according to press reports. It looks to me like oil can move even higher. That might not be of much help to CAD but it could be of great concern to central bankers. It might add credence to the growing “stagflation” narrative. 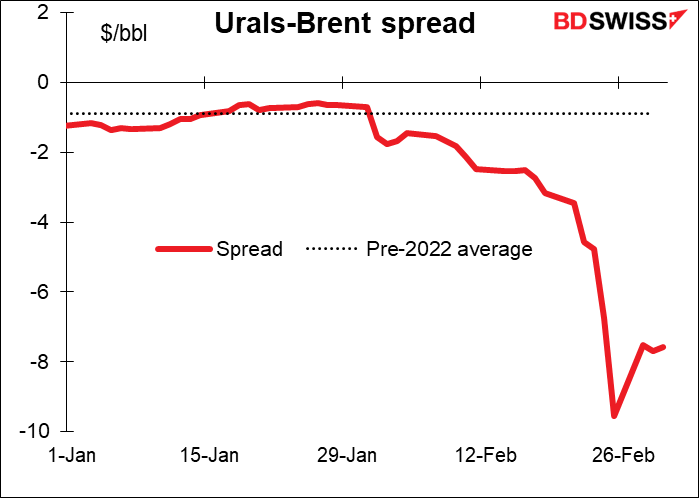 Sorry, I was mistaken: the OPEC+ ministerial meeting is today, not yesterday. 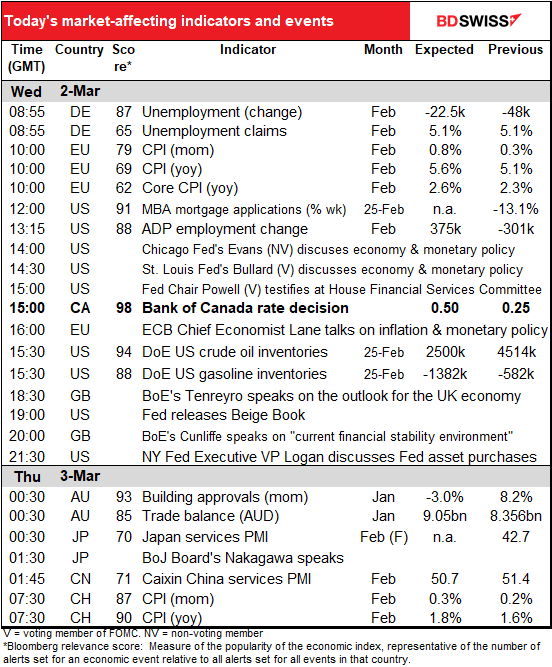 Lots in Europe this morning.

The German unemployment data are expected to show some improvement in the employment picture, with the number of unemployed people falling. The unemployment rate is forecast to stay the same but that doesn’t bother me as it probably just means the participation rate rose. 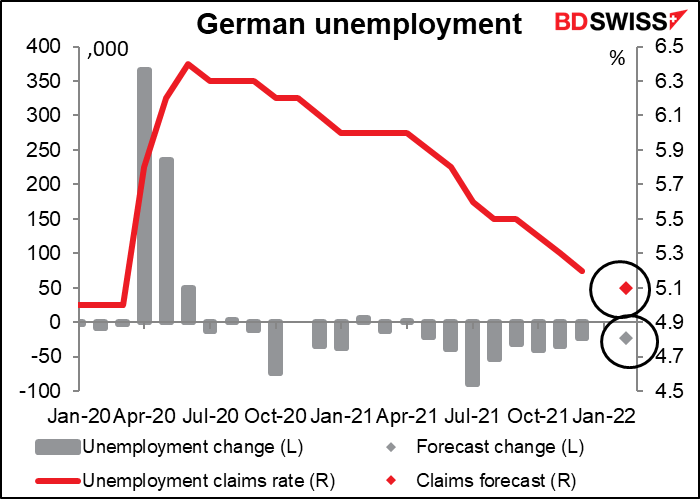 The EU harmonized index of consumer prices (HICP), which shocked the market last month by coming in a record 70 bps above the consensus forecast, is expected to move even higher this month. The forecast for the yoy change this time range from 5.0% to 5.9%, with the median at 5.6%.

The surprise last month wasn’t caused by any big surge in inflation, but rather it was because the market expected the inflation rate to fall but it didn’t. 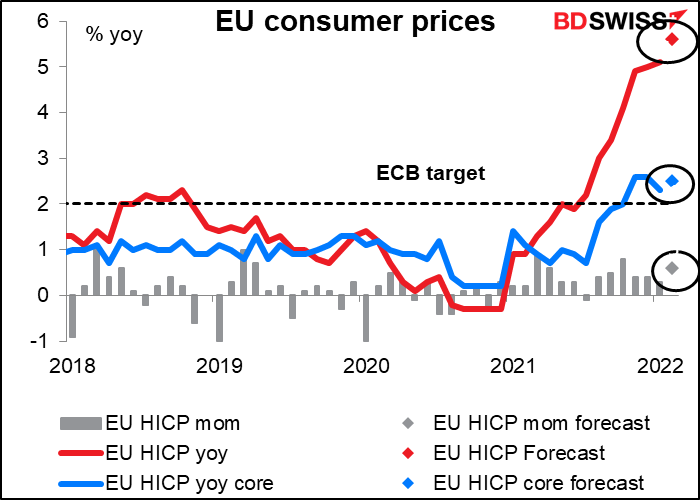 This indicator has beat estimates eight times, equalled estimates three times, and missed estimates once in the last year. 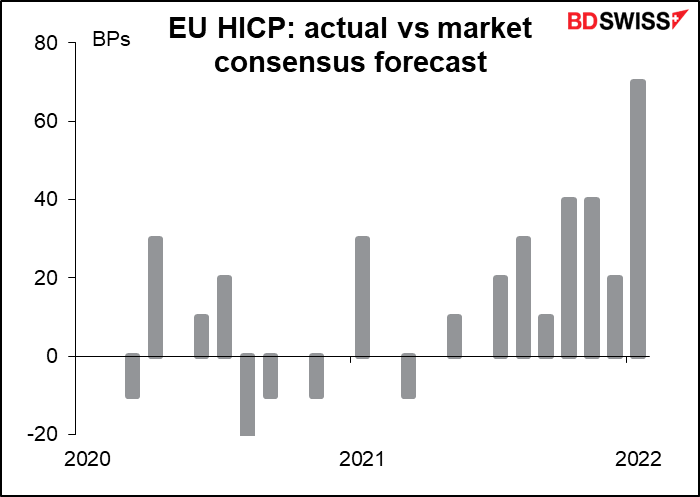 The rise in inflation isn’t base effects; the three-month annualized rate of change, which had been trending lower, is also expected to move higher (also to 5.4% yoy, which is why there’s only one dot in the chart).

Remember, the ECB’s inflation target is defined in terms of headline inflation, not core inflation. That makes times like this particularly difficult as they can’t just “look through” the impact of rising energy prices.

Next up is the ADP employment report. Automated Data Processing Inc. (ADP) is an outsourcing company that handles about one-fifth of the private payrolls in the US, so its client base is a pretty sizeable sample of the US labor market as a whole. It’s therefore watched closely to get an idea of what Friday’s US nonfarm payrolls (NFP) figure might be.

However, this is like looking at one of those new Ukrainian traffic signs to see which way to go. (I’m not going to translate this for you except I gather that if this were English, I’d probably be fired.) (By the way this one is photoshopped – the organization in charge of street signs put it out as a suggestion to citizens — but apparently they have indeed started posting real ones like this.) 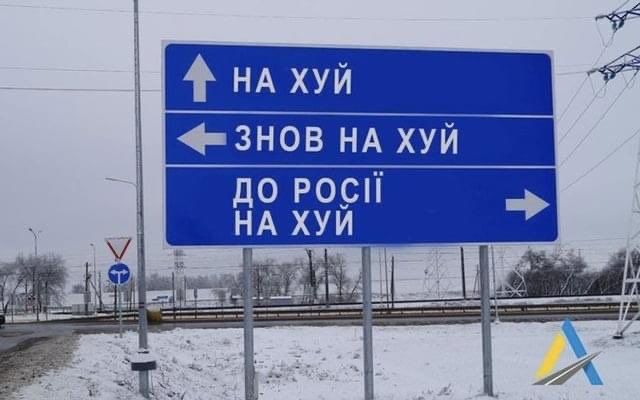 As you can see, last month was a doozy – the ADP was down 301k and the NFP was up 467k. It had never happened before that the two moved in different directions when they were so large. (It had happened that say one was up 50k and the other down 50k, for example, which is easy to understand – a discrepancy of 100k.) I’ll be honest – when the ADP report came out at -301k I thought “there’s no way the NFP can be positive.” This is now the textbook case of “past performance is no guarantee of future performance” as far as I’m concerned. 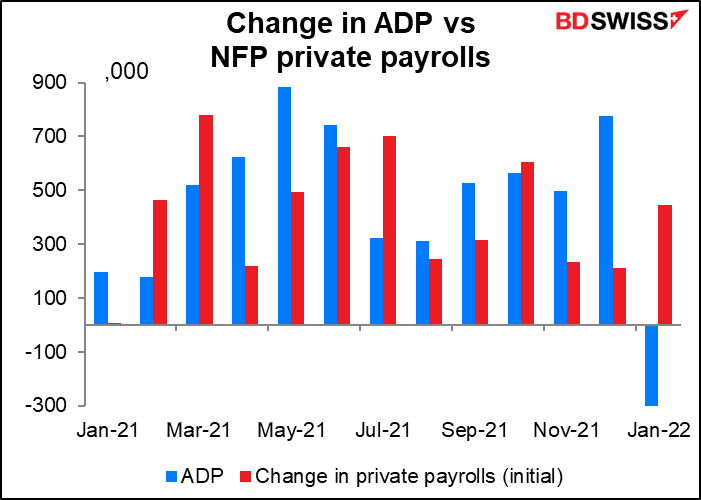 So, having explained to you at some length why it’s pointless to watch this indicator, I’m now going to tell you what the market expects so that you can watch it. The consensus forecast is for 375k, with a range of 200k-700k. I think 375k would probably be quite enough to ensure that the Fed would keep on its tightening path and so would be positive for the dollar. 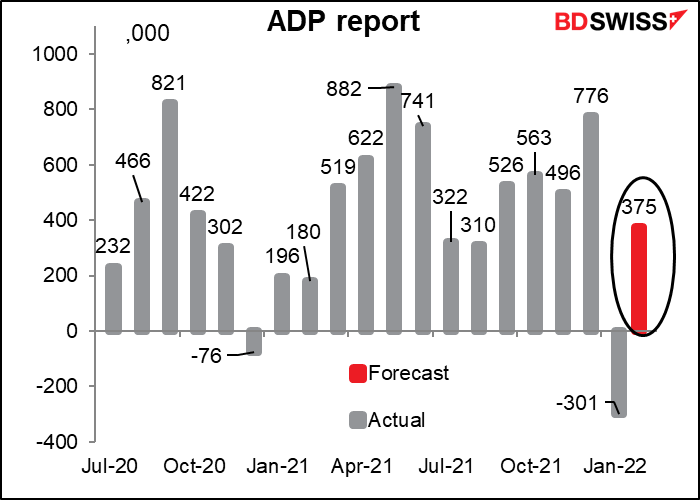 Economists seem to be pretty bad at guessing this one. It’s beat estimates 7 times in the last year and missed 5 times, with no hits (although that’s not really fair when we’re dealing with such big numbers -in November it was only 9k above the median forecast). 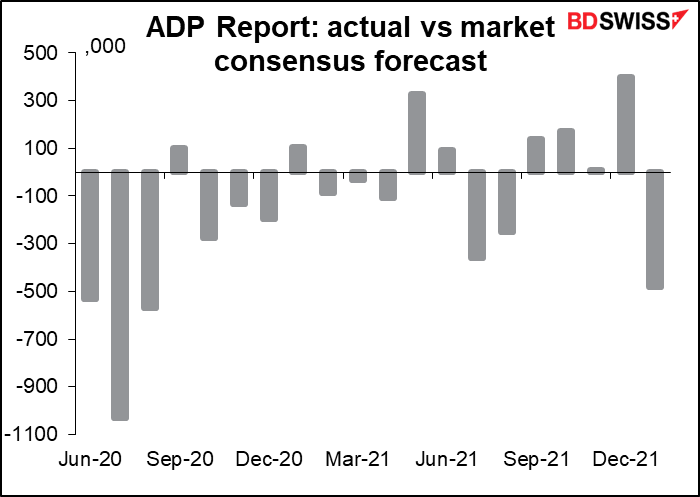 Now it’s time for the big event of the day:  the Bank of Canada (BoC) rate decision. The BoC is generally expected to hike its overnight rate by 25 bps to 50 bps. At its last meeting in January, the Governing Council said it “expects interest rates will need to increase,” and all 26 economists polled by Bloomberg expect that process to begin this week. Canada isn’t much affected directly by the fighting in Ukraine, although higher oil prices may give the economy somewhat of a boost (as well as increasing inflationary pressures).

With headline inflation now 5.1% and two of the three core measures of inflation above the Bank’s 1%-3% target range, it’s time to get started. 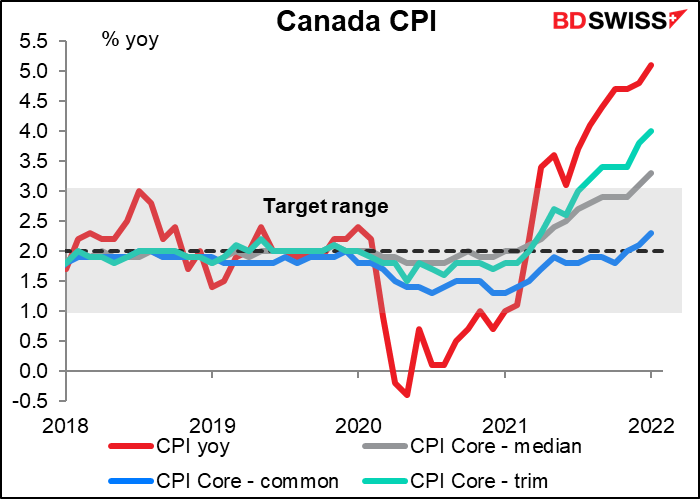 The impact on the markets then will depend on what they imply about the future course of tightening and what if anything they intend to do with their balance sheet, which increased by far and away the most of any major central bank following the pandemic. I think they could take a relatively hawkish tone, given the high level of inflation, which would be positive for CAD. But much depends on general risk mood too. 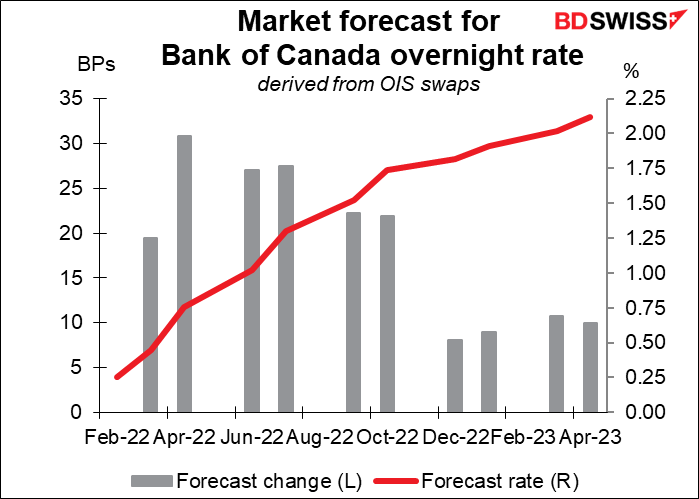 The Fed releases the “Summary of Commentary on Current Economic Conditions,” aka The Beige Book as always two weeks before the next FOMC meeting. It’s significant for the market because the first paragraph of the statement following each FOMC meeting tends to mirror the tone of the Beige Book’s characterization of the economy. The book doesn’t have any number attached to it that quantifies its contents, but many research firms do calculate a “Beige Book index” by counting how many times various words appear, such as “uncertain.” In any case, the book is largely anecdotal so you’ll just have to watch the headlines as they come out.

Overnight, Australian building approvals are expected to be down somewhat after the strong +8.2% mom increase in December. That might seem bad but it would pull the 6-month moving average up a bit to -0.3% from -1.2%. So it should be at least neutral for AUD. 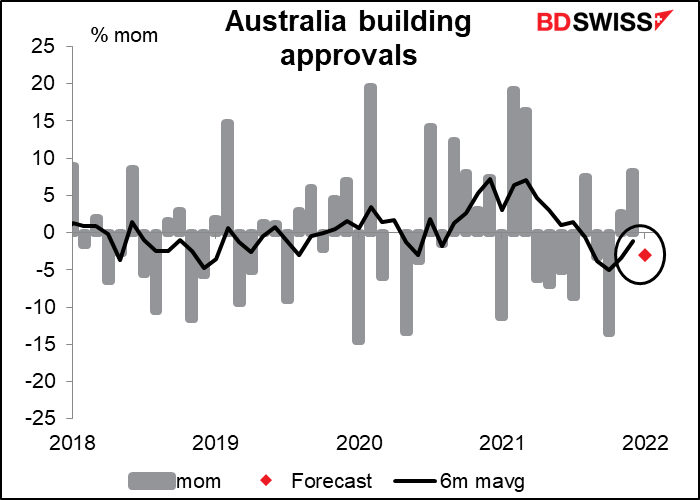 Australia also announces its trade balance. It’s expected to be up a bit, but more importantly, since it’s not seasonally adjusted, the 12-month moving average on this forecast would be down slightly. 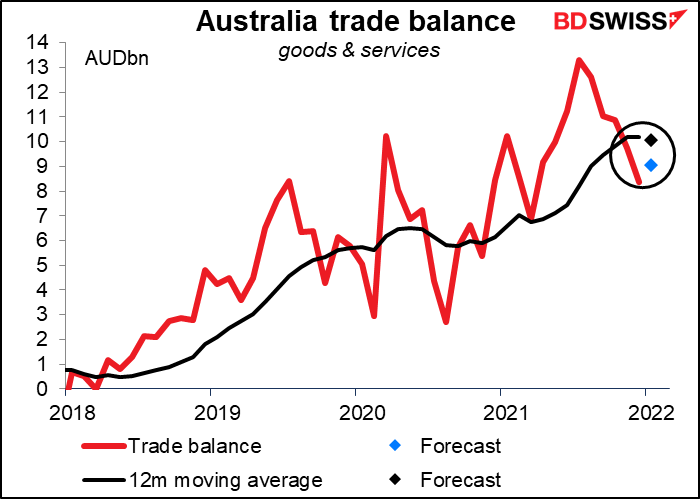 The fall in the trade surplus is kind of strange to me since commodity prices continued to move higher in January. 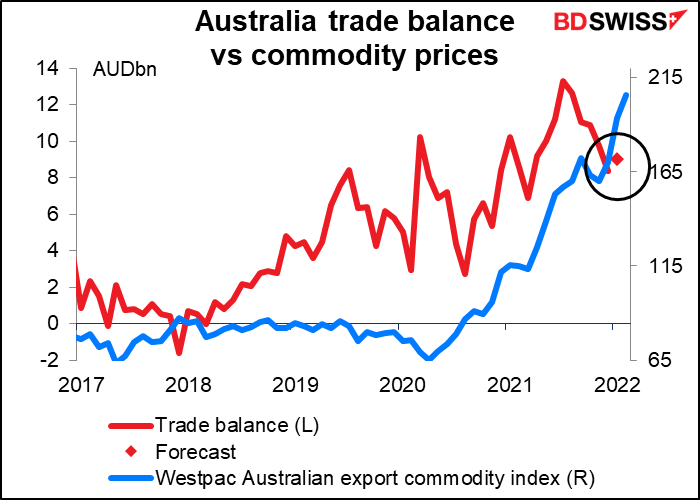 And therefore the terms of trade kept improving, too. 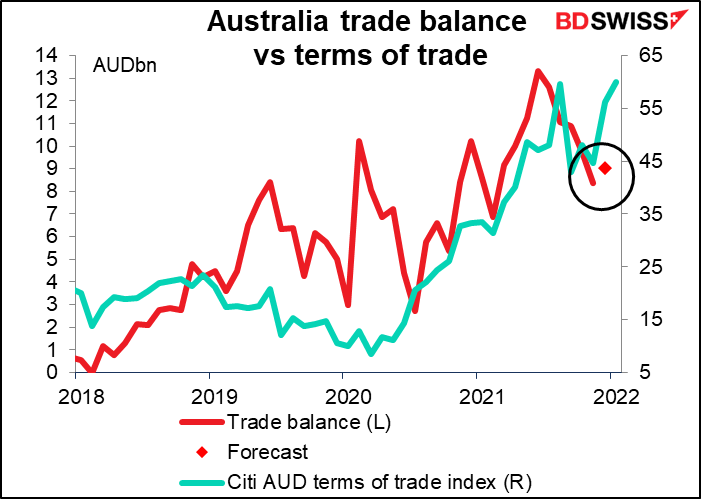 The answer must be that the volume of sales abroad didn’t increase that much, because exports have been fairly stable over the last few months. On the other hand, imports have been rising sharply as restrictions are lifted and people can get back to shopping. 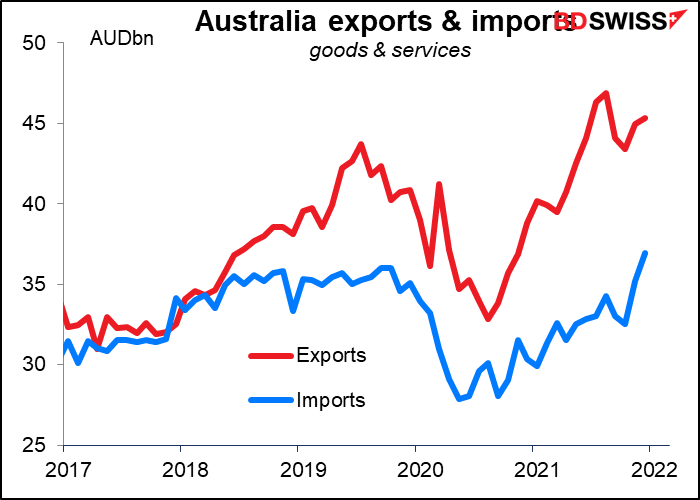 Finally, Bank of Japan Policy Board member Junko Nakagawa will speak. Nakagawa-san is the token woman on the Policy Board – there’s usually one and only one woman on the board at any given time. I like her because she doesn’t even have an undergraduate degree in economics, much less a Ph.D. – all she has is a B.A. in Literature. (Mine is in History.) She rose up through the ranks of Nomura Securities, which is a pretty tough organization, to become the Chair of Nomura Asset Management. She joined the BoJ Board in June last year.

She’s been identified as having views almost identical to that of Gov. Kuroda, so I don’t expect anything radical from her, but last time she spoke – back in November – she was talking about the likelihood of inflation rising. “The upward pressure is strengthening a little,” she said. I wonder what she and her colleagues are thinking about this issue now. Not only are energy and food prices rising worldwide, but also In April, the impact of the cut in mobile phone charges will stop dragging down the inflation rate and it should more than double. How will the BoJ respond? 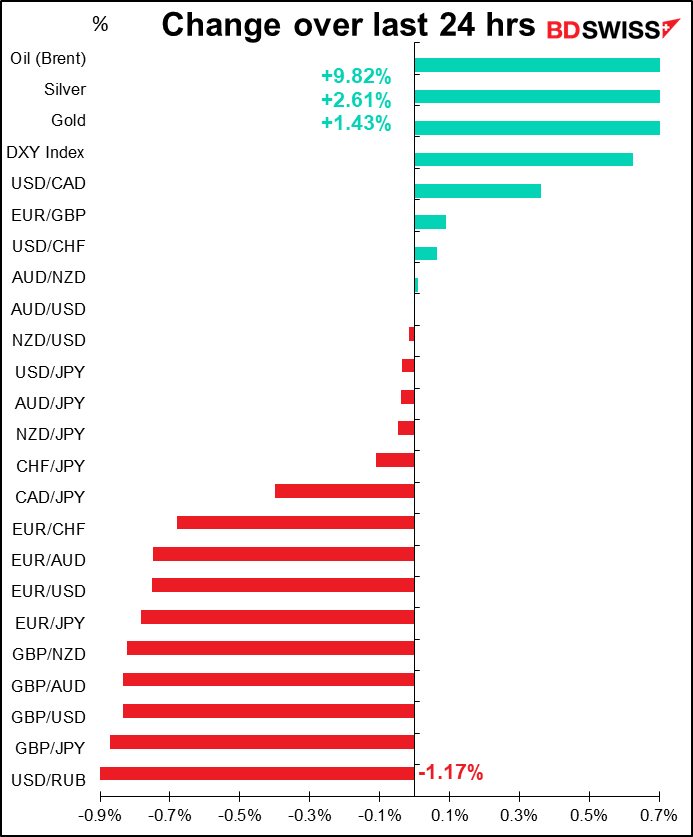