You are at:Home»Market Preview»AUD Jumps as RBA hikes More than Expected; JOLTS report 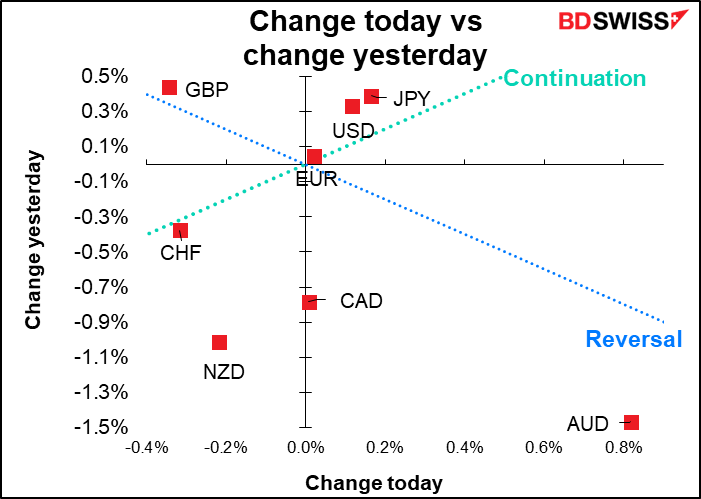 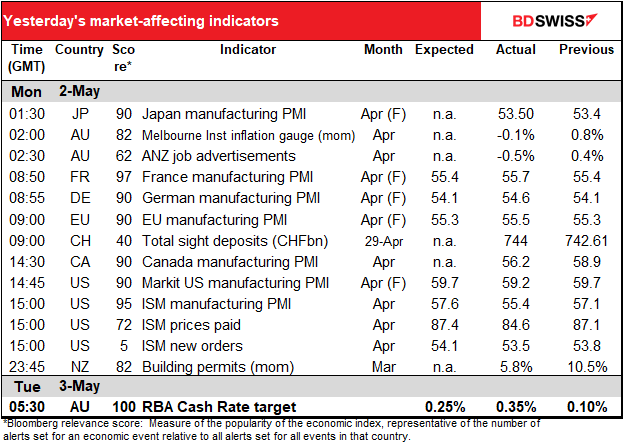 AUD was the focus of attention as the Reserve Bank of Australia (RBA) hiked by 25 bps to 0.35%, a totally unforeseen move. Out of the 30 forecasts compiled by Bloomberg, five people thought they’d hike to 50 bps and six thought they wouldn’t hike at all. The rest forecast a 15 bps hike to 25 bps.

The RBA Board’s rationale was:

The economy has proven to be resilient and inflation has picked up more quickly, and to a higher level, than was expected. There is also evidence that wages growth is picking up. Given this, and the very low level of interest rates, it is appropriate to start the process of normalising monetary conditions.

The Board is committed to doing what is necessary to ensure that inflation in Australia returns to target over time. This will require a further lift in interest rates over the period ahead. The Board will continue to closely monitor the incoming information and evolving balance of risks as it determines the timing and extent of future interest rate increases.

Over coming months, important additional evidence will be available to the Board on both inflation and the evolution of labour costs. The Board will assess this and other incoming information as its sets policy to support full employment in Australia and inflation outcomes consistent with the target.

Note the changes: they no longer need any “additional evidence” and they switched from the abstract “sets policy,” which can go either way, to “the timing and extent of future interest rate increases.”

The decision validated the market’s longer-term pricing. The market’s estimate of the changes at each meeting didn’t change that much, but with the larger-than-expected starting hike, the trajectory becomes a bit more front-loaded. Rates are expected to be higher up until September than they were expected to be before, but the low expectation for October puts the trajectories back on track. The market now sees the cash rate rising to 2.62% by the end of the year v 2.56% on Friday, not a huge difference. 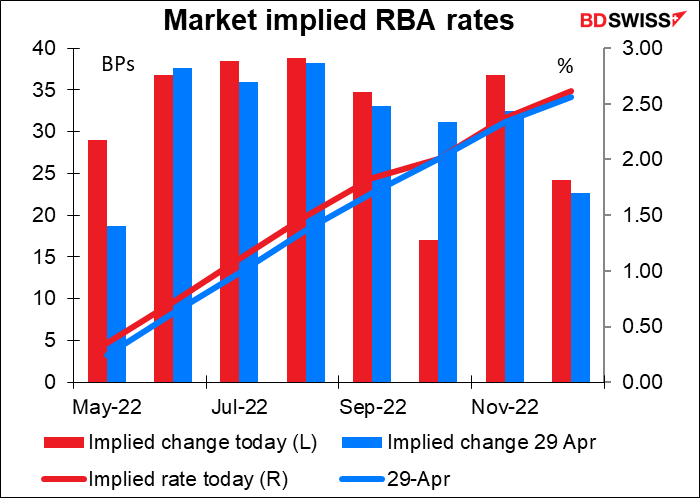 As central banks tighten, inflation expectations are coming down in most countries.

As for why GBP was the weakest currency, perhaps it’s due to the lack of any noticeable movement in rates, although that’s kind of unfair since the UK was on holiday Monday. But even comparing today’s 10-year yield with Friday’s, it’s up only 3 bps, not a major increase. I assume this is due to people downgrading their hopes & dreams for tomorrow’s Bank of England meeting. That may be keeping GBP under pressure. Without the support of an aggressive monetary policy, GBP is likely to be buffeted by political instability and obstacles to growth thrown up by Brexit. That’s likely to keep the currency under pressure for some time, IMHO. 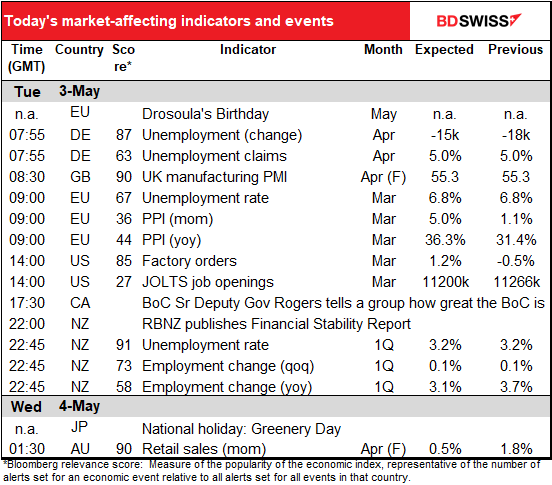 The European day starts out with German unemployment. Unemployment in Germany – indeed in all the EU – hasn’t fluctuated as much as in the US, where “at-will employment” is the norm and people get fired at the drop of a hat so that senior management can maximize the value of their stock options.

The figures are not expected to be stunning – a small drop in the number of unemployed persons and no change in the unemployment rate. 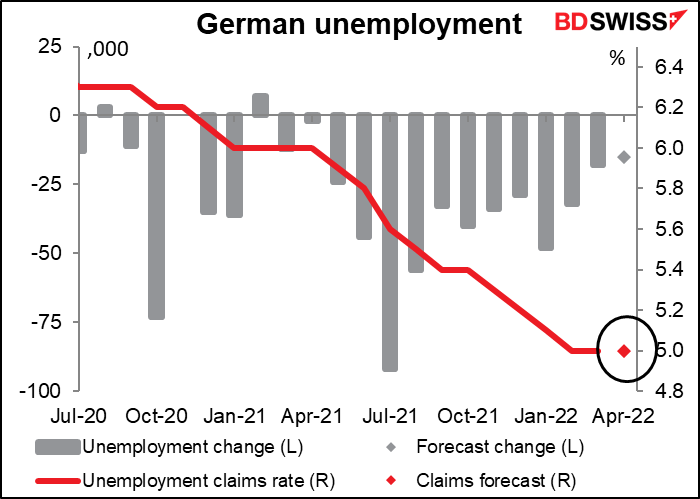 Meanwhile, the number of people employed finally recovered in February to the pre-pandemic level (but no more). There’s no forecast for this series. 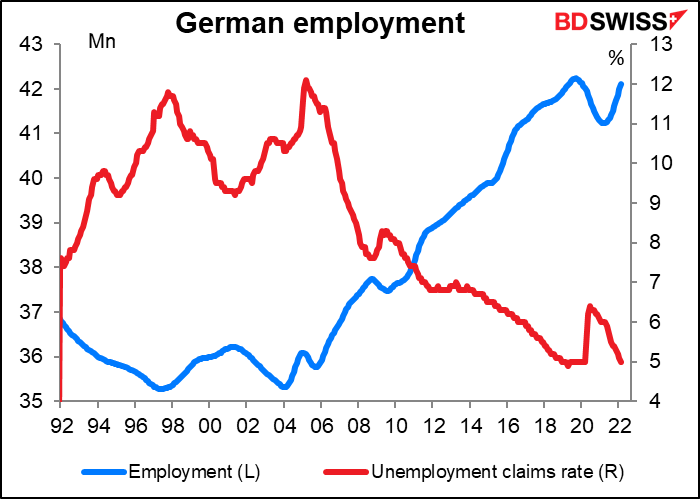 Still, given the problems with Ukraine and high energy costs, holding steady is an accomplishment in itself. After all, 5.0% unemployment is just a bit higher than the record-low 4.9% set in April 2019 (data back to Dec 1991). I’d say EUR-neutral.

Meanwhile, Eurozone-wide unemployment is expected to be unchanged at the record low of 6.8% (data back to April 1998). But since the EU-wide figure is a month behind the German and much of the other national data, it doesn’t get that much attention. Besides, the European Central Bank (ECB) doesn’t have a dual mandate so officially at least unemployment has no policy implications. 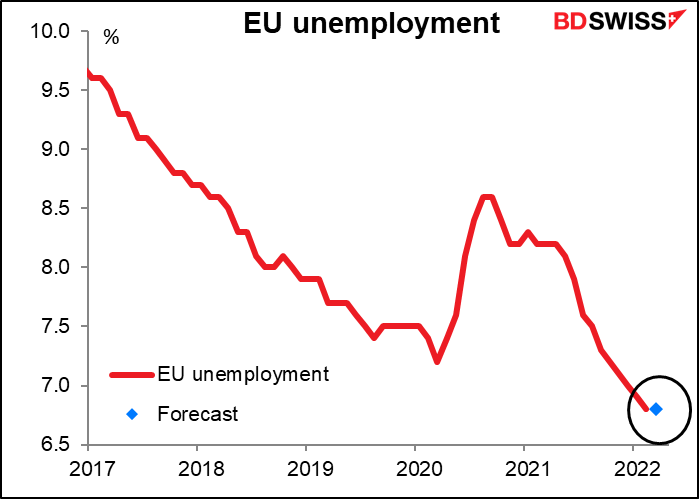 The Eurozone producer price index (PPI) normally doesn’t attract much attention, but with the focus on inflation nowadays I thought I’d start covering it. It’s expected to be disastrous, with a month-on-month rate of increase far above the ECB’s target for annual price increases. No doubt this is due in a large part to soaring energy prices How quickly these get passed on to consumers is a major issue – the word from the gnomes at the ECB is that they’re getting passed along much more rapidly than ever before. According to an article in the March ECB Economic Bulletin, there has been a “swifter than expected pass-through from wholesale to consumer energy prices…” “For electricity, wholesale prices were passed on to consumers almost immediately in some countries, despite this pass-through historically having taken three to twelve months,” the researchers said. 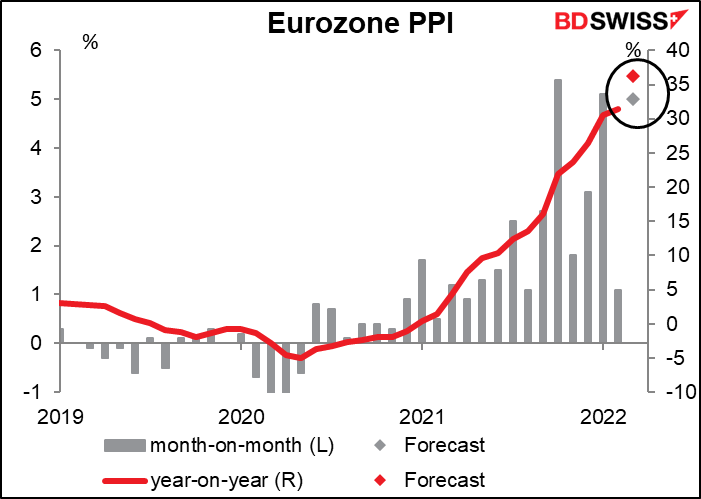 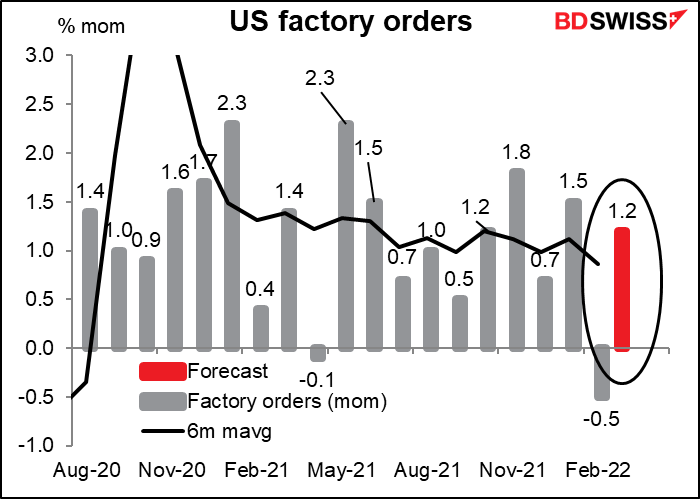 On the other hand, I’m a big fan of the Job Offers and Labor Turnover Survey (JOLTS) program, despite its low Bloomberg relevance score. The number of job openings is expected to decline slightly from the previous month, but still be only a bit below the record level of last December. 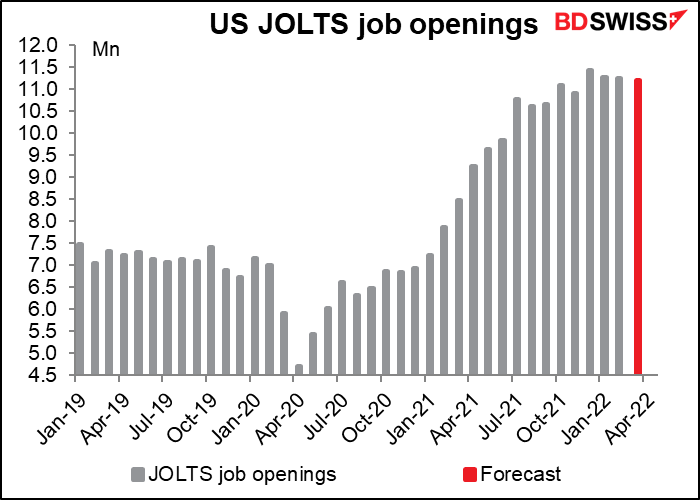 Given the fall in the number of unemployed persons, that would put the job-openings-to-unemployed ratio further into record territory at 1.88. A figure like this would confirm Fed Chair Powell’s pronouncement about an “extremely, historically tight” labor market and could embolden the Federal Open Market Committee (FOMC) members at their two-day meeting, which starts today. USD+ 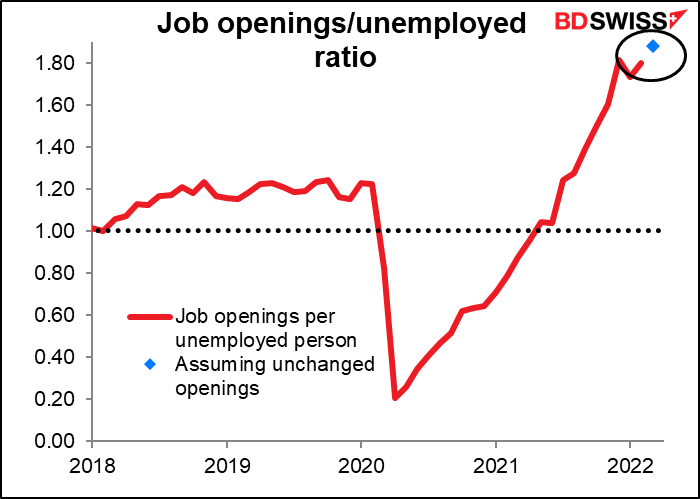 Overnight we get the New Zealand employment data. This data is released quarterly and so each figure is freighted with more meaning and significance than in countries where it comes out monthly, particularly as the Reserve Bank of New Zealand (RBNZ) is one of those central banks that has a dual mandate: it’s required to “support maximum sustainable employment” as well as keeping prices stable.

In any case, employment isn’t restricting the RBNZ’s actions. The unemployment rate was at a record low 3.2% in Q4 last year and is expected to go a bit lower this quarter. It may be that the small increase in jobs in Q4 and expected for Q1 is because there aren’t that many unemployed people left in the country. 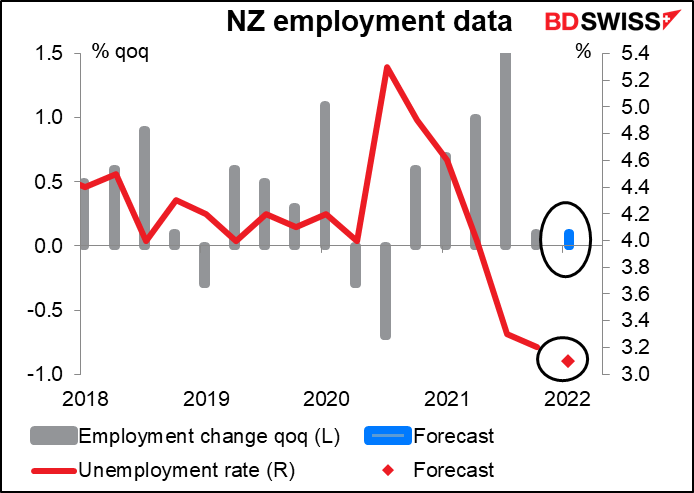 Employment has not only exceeded its pre-pandemic level but also its pre-pandemic trend. I’m not sure whether a further improvement will change the RBNZ’s calculations at all, but it certainly won’t hurt. NZD+ 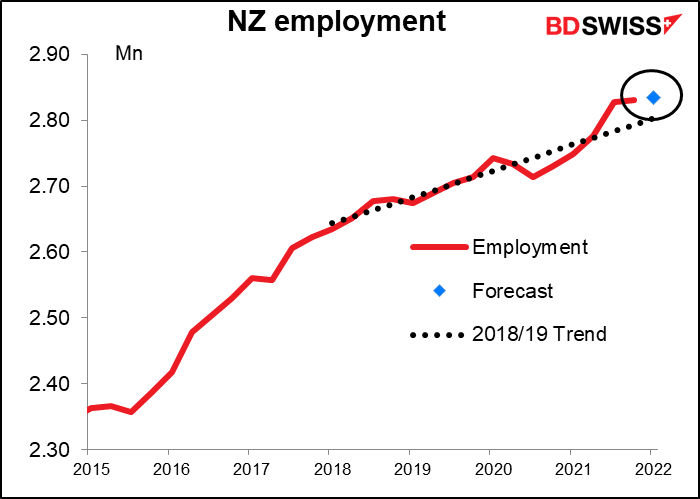 Australia retail sales are expected to be up only slightly after February’s modest gains. 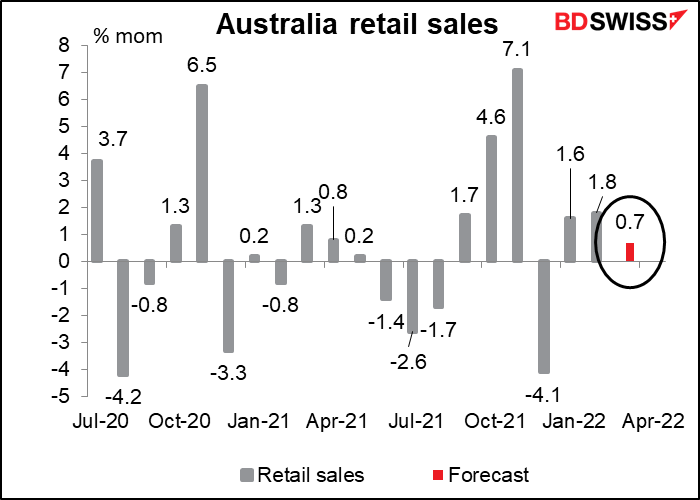 But don’t let the small month-on-month rates of increase fool you – the actual level of sales is quite high. February’s sales were the second-highest ever, after November last year. Eating establishments (cafes, restaurants & takeaways) had an especially good month as they returned to more normal conditions. A further increase, even if small in percentage terms, would signify a still-healthy labor market and could be positive for AUD. 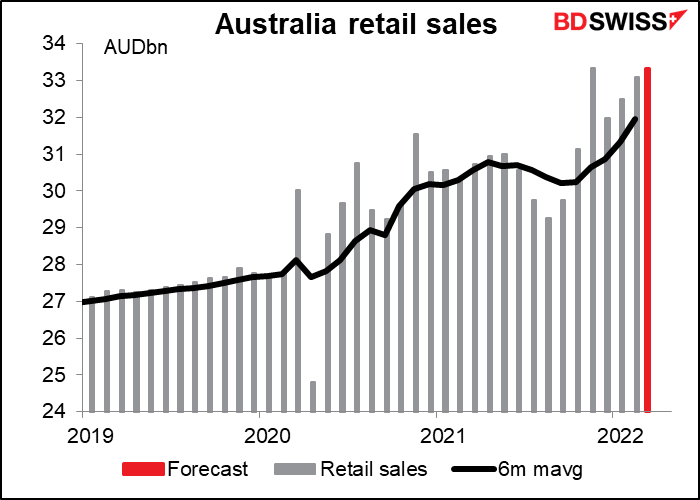 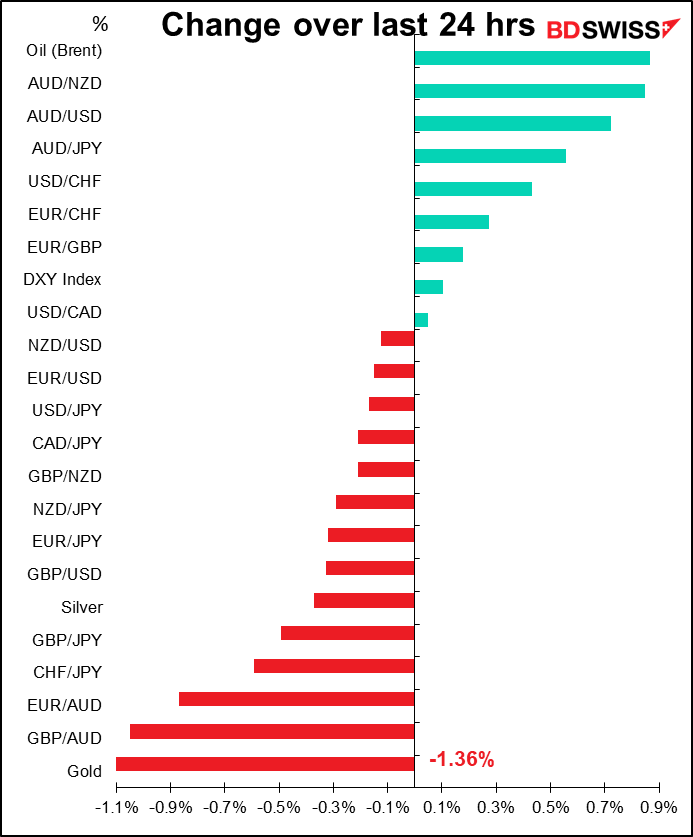