You are at:Home»MARKET PREVIEW»CHF Up , EUR Down as Ukraine Situation Deteriorates; US preliminary PMIs, RBNZ meeting 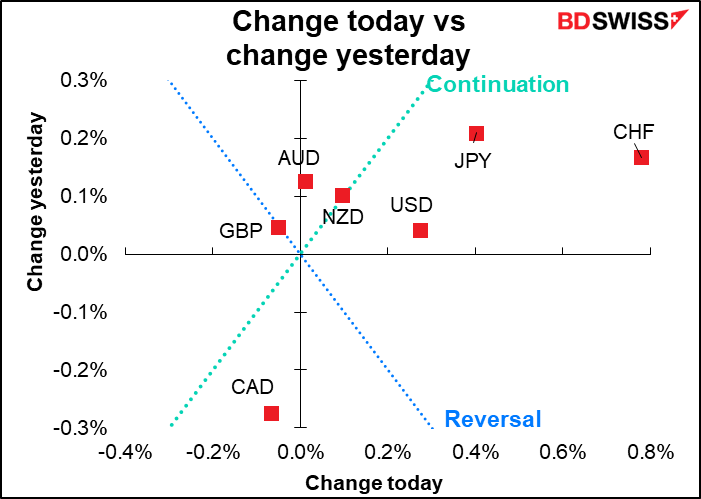 It looks like people have finally started to take seriously the possibility of war in Europe. Russian President Putin made an emotional speech claiming that Ukraine was a country “created by Russia” and hinted at the possibility of a wider military campaign. He orded troops into seperatist regions of Ukraine and recognized their independence.

As a result, Russian assets plunged. The MOEX stock market index, which was down 4.3% for all of last week, collapsed 10.5% yesterday, its worst day since March 2014 during the Crimean annexation. It’s down a further 3.6% this morning as I write. USD/RUB soared (i.e. RUB collapsed) as the yield on Russia’s 10-year bond jumped an incredible +79bps to 10.6%.

Reflecting those fears, EUR/CHF fell sharply, pushing CHF up and EUR down. 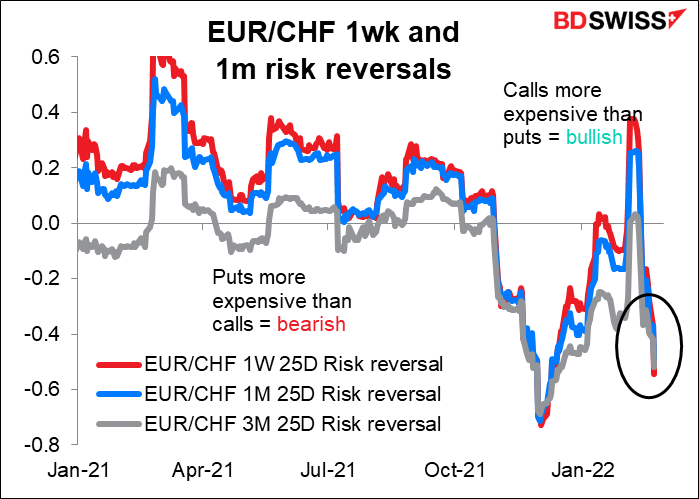 But what strikes me still is how flat the risk reversal curve is. If people were really worried about a war, wouldn’t it slope downward more? People would expect things to get worse over time. Or maybe the opposite – maybe it would slope upward because they’d expect a difficult few months now but for things to be sorted out a year from now. I suppose this is discounting a scenario where nothing happens – things don’t get worse but they don’t get any better, either. A continued stalemate but no real war. 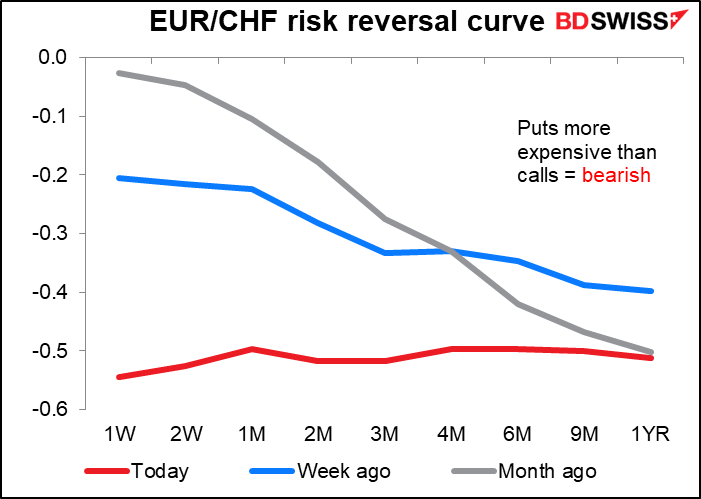 That’s what we’re seeing in the EUR/USD RR curve. It’s upward sloping, meaning people believe the risk of EUR/USD falling now is greater than it will be a year from now (presumably when much of the Fed’s rate hikes are out of the way but the European Central Bank has just started to hike). 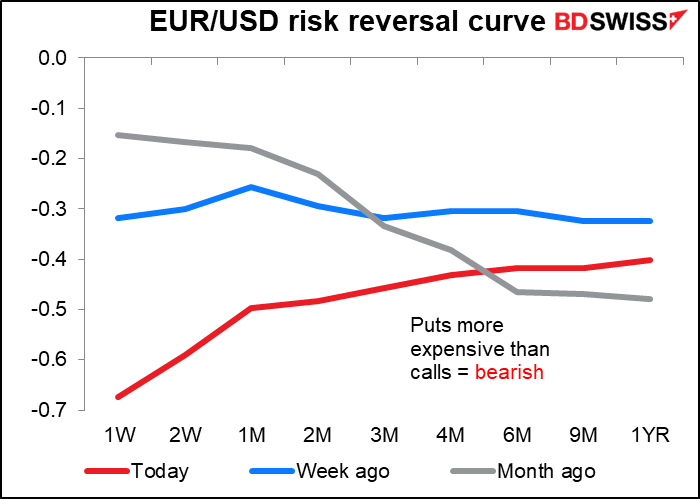 [Explanation::  In foreign exchange, a risk reversal (RR) is the difference in implied volatility between out-of-the-money call and put options with similar specifications. This measure tells us whether the market is willing to pay more for calls or puts. That information is useful in judging whether the market thinks it’s more likely that the pair will rise (in which case the call will cost more) or fall (in which case, the put would be more highly valued)]

It’s also noticeable that although oil soared 4.6%, USD/CAD rose a bit. CAD is trading as a risk-sensitive commodity currency, not a petrocurrency.

The next step is to see what the response of the West will be, specifically what sanctions the West puts on Russia. Within that, there will be a lot of interest in how the US and UK response compares to the EU response – the US and UK rely less on Russian energy and so the EU has more at stake here. Most of the countries involved said overnight that they would be implementing sanctions on Russia imminently.

Of course we’ll also be watching what Russia does with regards to the troops it sent into Ukraine’s separatist regions. 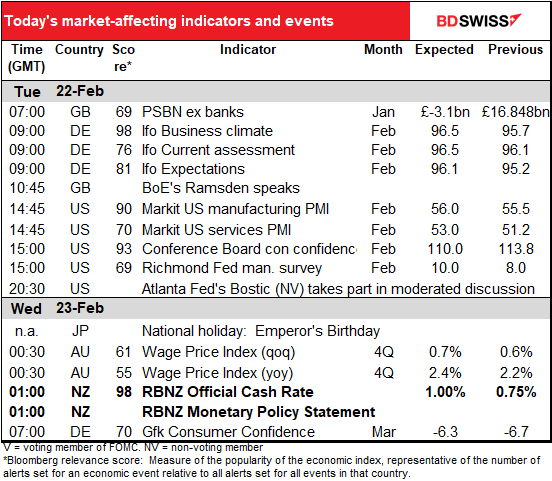 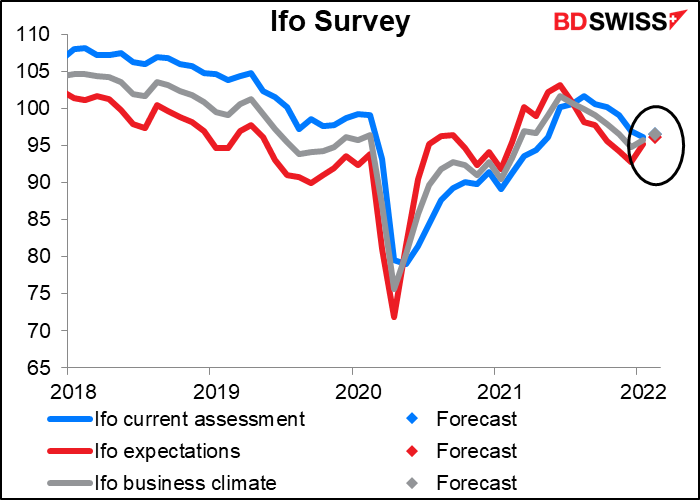 It’s surprising to me that expectations are improving in Germany when the virus is getting so much worse (unlike for the Eurozone as a whole). So far in February there have been 179k new cases a day, up tremendously from 91k a day in January, which was the highest for any month so far. On the other hand, deaths are way down – 165 a day vs 189 a day in January and the peak of 754 a day back in January 2021. Perhaps the virus has mutated from a terrifying “known unknown,” something we know about but don’t understand, into just another risky “known known.” Many people say they are “through with the virus,” although strictly speaking that only holds true in Germany for around 165 people a day. 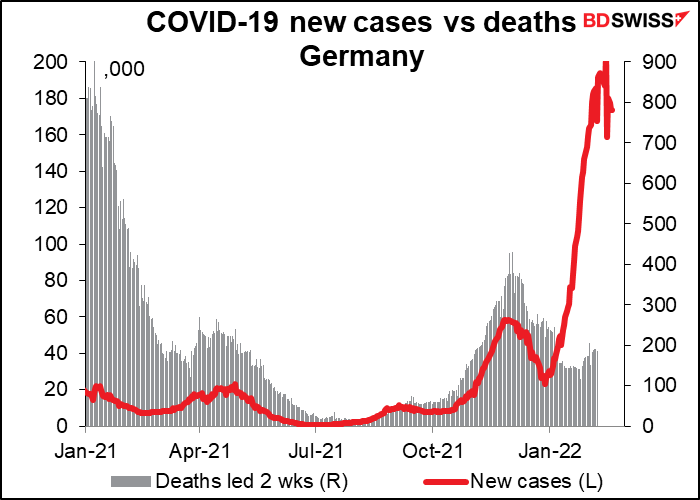 We’ll get the preliminary US purchasing managers’ indices (PMIs) today. Japan’s PMIs plummeted, but Europe (including the UK) hit the ball out of the park when it came to services. That shows people ignored the surge of the omicron variant and went about their lives much as normal. In Switzerland for example they’ve lifted most requirements and people seem to think that means the end of the pandemic.. My daughter, who lives there, says that people at work pester her all the time: “why are you still wearing a mask? It’s not required any more.” 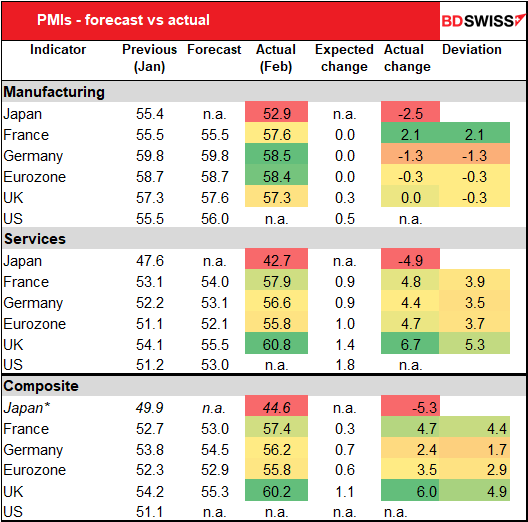 (I told her not to listen to what anyone else said and referred her to the Jimi Hendrix song, “If Six Was Nine.” I’m the one who’s gonna die when it’s time for me to die….so let me live my life…the way I want to.”)

The Conference Board consumer confidence index began recovering as soon as President Biden took over, but then as the pandemic worsened it took another leg down and has been stuck around midway ever since. It’s expected to be down a bit but still within the same range that it’s been in since last August.

The Conference Board’s questions emphasize employment and labor market conditions, which are improving nowadays, so that’s supporting the index despite the deterioration in the stock market.

A decline in the index, even a small one, is nothing to be happy about so this is potentially negative for the dollar. 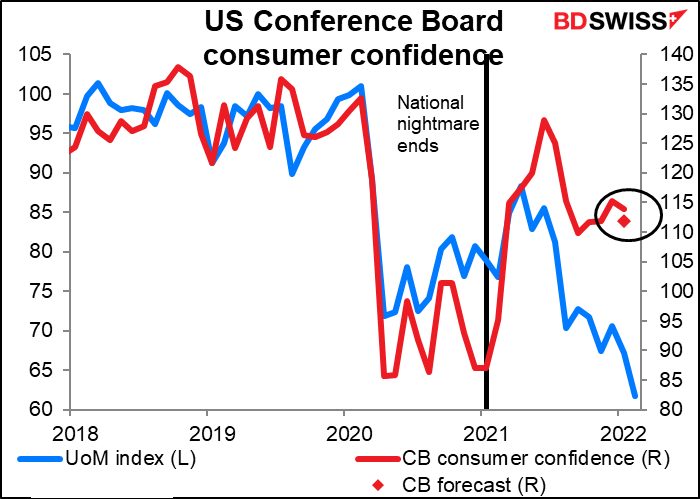 The Richmond Fed survey is expected to rise to 10.0 from 8.0. That would put it almost exactly in line with the average of the Empire State and Philly Fed surveys, which is 9.6.

While the market puts more weight on the Empire State and Philly Fed indices – probably because they come out earlier – the Richmond Fed survey is the one that best predicts the Institute of Supply Management (ISM) purchasing managers’ index (PMI), according to my research. The ISM is one of the most important monthly indicators and so I pay attention to the Richmond Fed index.

I think a figure like this would be neither here nor there, neither particularly bullish nor bearish as it would predict the economy continuing along as it is. Therefore I think it’s likely to be neutral for the dollar. 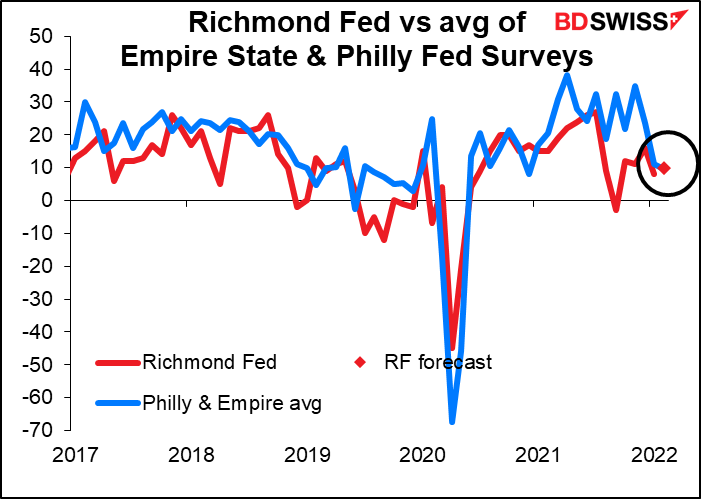 Overnight Japan is closed for a holiday, the Emperor’s Birthday. On this day it’s customary for the emperor, empress and the rest of the imperial family to make about three appearances on a veranda of the Imperial Palace in Tokyo and wave to the crowd, which generally waves back. (This is a photo of the previous emperor at his birthday. The current emperor is the second-from-left.) 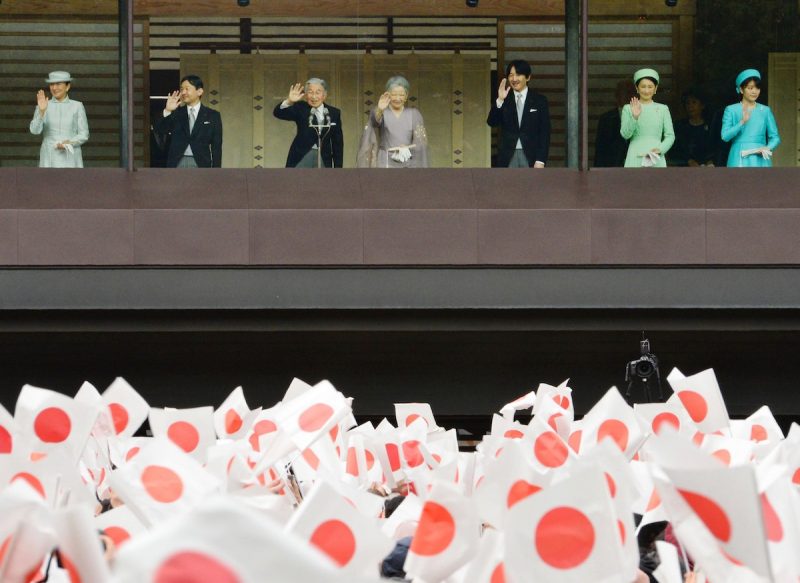 Aside from that thrilling ceremony, there are two other noticeable events overnight: the Australia wage cost index and the Reserve Bank of New Zealand (RBNZ) meeting. I dealt with both of them (and the above Conference Board consumer confidence index) at some detail in my world-renown Weekly Outlook (The Russians are coming! Or maybe not) so I’ll just summarize what I said there.

Australia’s Q4 wage cost index is important because the Reserve Bank of Australia (RBA) has singled out wages as the biggest issue preventing them from hiking. The expected figure of +2.4% yoy has usually been consistent with inflation of around 1.5% yoy – 2.0% yoy, so a little below their 2%-3% target range. Wage growth would probably have to hit 2.5% yoy or above for the RBA to feel confident that inflation is “sustainably” within its target range. It’s possible – the forecasts range from 2.3% yoy to 2.7% yoy. But even if it doesn’t hit that level this time, it’s still expected to get closer. AUD+ 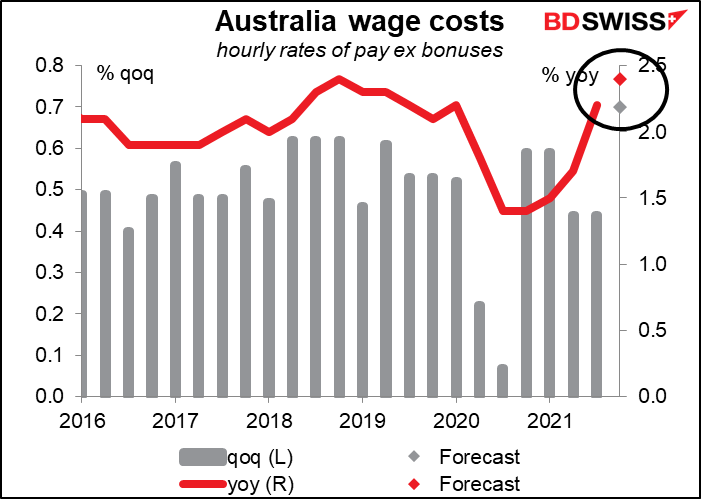 Notice that the market forecasts for the rate change in February and the next meeting in April are both over 25 bps. That means they’re pricing in a small (around 16%) chance of a 50 bps hike at this meeting. That’s the main thing people are going to be watching for. 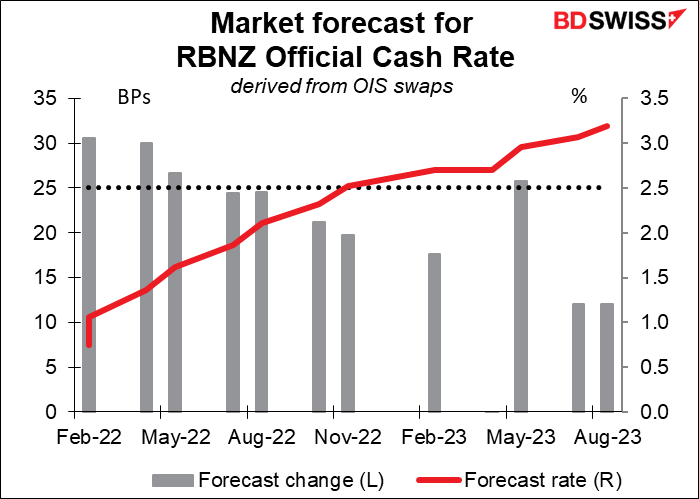 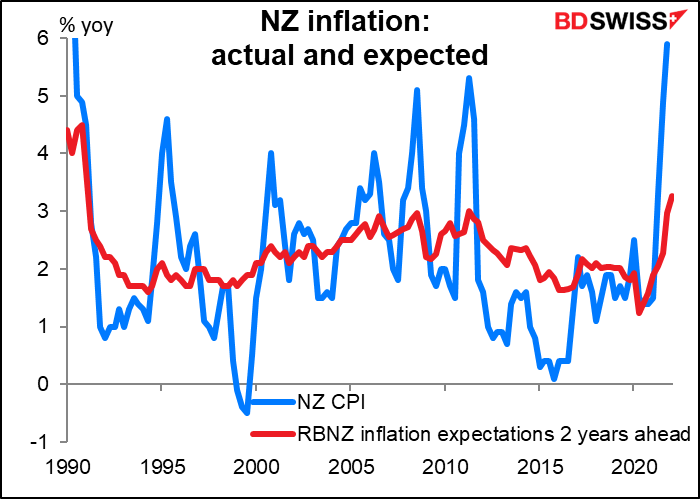 Reason not to hike 50 bps:  Employment barely grew at all in Q4 (up only 0.1% qoq) and there was a fall in the participation rate.

What I expect: I expect they’ll discuss a 50 bps hike but in the end hike only 25 bps. Even that might be considered “hawkish” and positive for NZD, just as the 5-4 vote at the last Bank of England Monetary Policy Committee meeting was considered hawkish, not for what they did but for what they weighed doing. 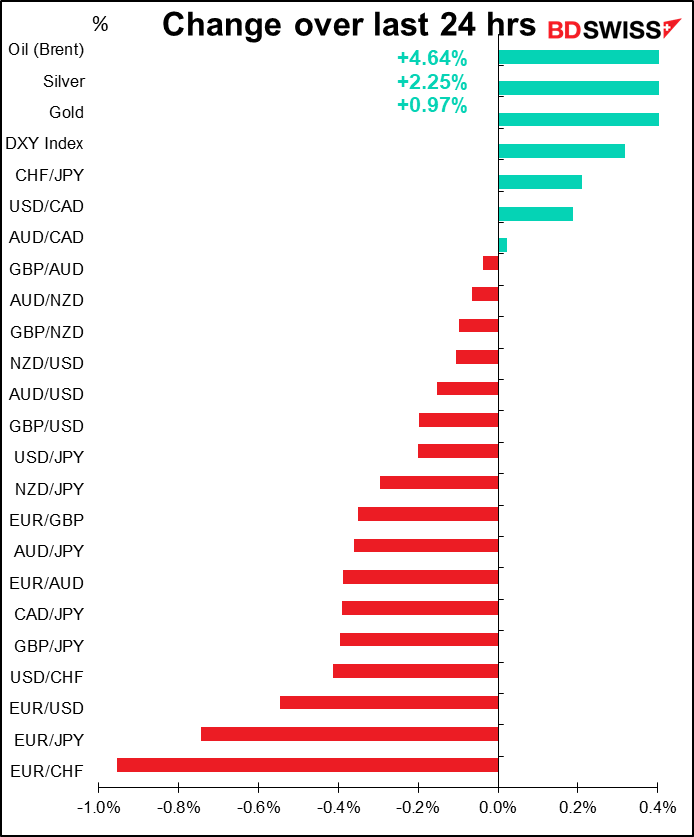