You are at:Home»MARKET PREVIEW»“Safe Havens” Up, CAD Down Despite Hopes of Biden-Putin summit; preliminary PMIs Russia and Ukraine are still the focus of the markets. I’m not sure what’s happening there, but I think that just leaves me no different than anyone else.

The big news over the weekend, I’d say, is the possibility of a summit between President Biden and President Putin.

The breakthrough was brokered by French President Macron. First he spoke with Putin and afterward French officials said both parties agreed that a diplomatic solution was needed and that the foreign ministers of both nations would have further talks this week. Putin also told Macron that his troops would eventually leave Belarus, contrary to what he said before. Then overnight it came out that Macron has brokered a summit between Biden and Putin for later this week. White House officials have confirmed that Biden had accepted the meeting “in principle” on condition that Russia does not invade Ukraine.

As long as that’s a possibility it means fighting hasn’t begun in earnest. This may give Putin a face-saving way of climbing down from this difficult position he’s gotten himself into. You might think that this news would give rise to a big “risk-on” mood. If so, you’d be wrong. Stocks in Asia are mostly lower this morning, although the S&P futures are up 0.9% and DAX futures up 0.8%. 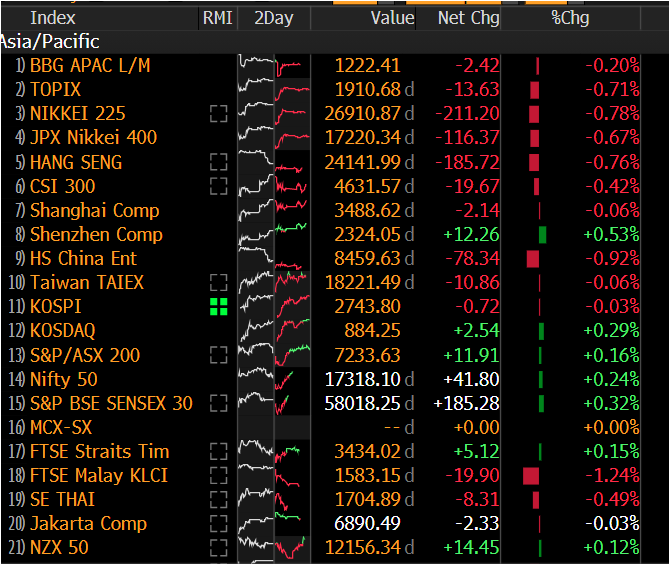 And as the table above shows, the safe-haven JPY and CHF are the biggest gainers – hardly what you’d expect if people were dancing in the streets with relief that war was avoided.

That may be because people don’t necessarily believe this will end the threat of war. UK PM Johnson Sunday said Russia is planning “the biggest war in Europe since 1945.” He indicated that the UK and US would bring further sanctions against Russia than have been suggested before, including stopping its companies “trading in pounds and dollars” – a move that he said would “hit very, very hard.”

And White House Press Secretary Jen Psaki said, “We are always ready for diplomacy. We are also ready to impose swift and severe consequences should Russia instead choose war. And currently, Russia appears to be continuing preparations for a full-scale assault on Ukraine very soon.” (Emphasis added)

Meanwhile, CAD is the biggest loser, which is somewhat of a puzzle to me.

USD/CAD has been pretty much following USD/RUB. In other words, moving on risk sentiment.

Whereas even Brent hasn’t been following RUB strictly.

On other subjects, the UK is set to announce this week, perhaps as early as today, that those catching covid will no longer have to legally self-isolate. In other words, the UK is moving into a “learn to live with the virus” regime. This comes not so long after a tremendous spike in cases but with deaths far below the previous peak. Given the protests everywhere against measures to contain the virus, other countries will no doubt watch closely to determine whether they too can follow this path. If so we could see a strong revival of activity and employment, especially in the service sector, and a boost to the activity-sensitive commodity currencies. 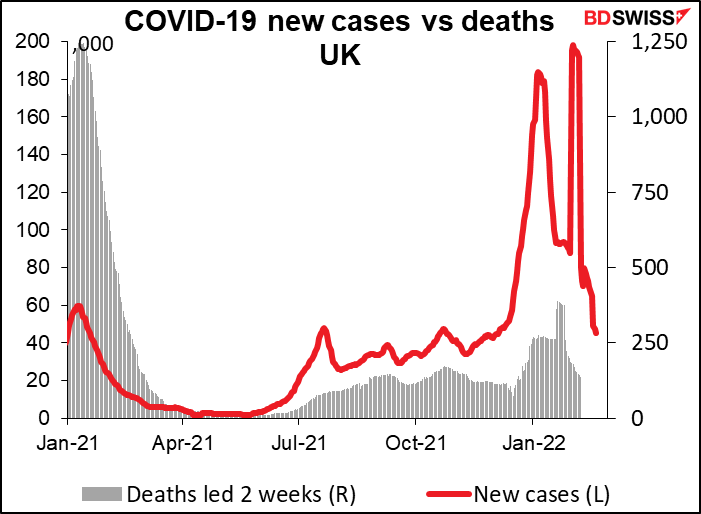 Monday is President’s Day in the US. This means futures markets are open but the US stock markets are closed. Canadian markets are also closed for Family Day.

Speculators trimmed their long USD position over the last week, mostly by increasing long EUR positions and flipping from short GBP to slightly long GBP. This was partially offset by an increase in short JPY and a decrease in long CAD positions. But long DXY remains their second-biggest long. It’s also surprising they would trim their long CAD and remain short NZD and AUD, yet increase their short JPY positions – these seem inconsistent with the usual “risk-on” or “risk-off” views. 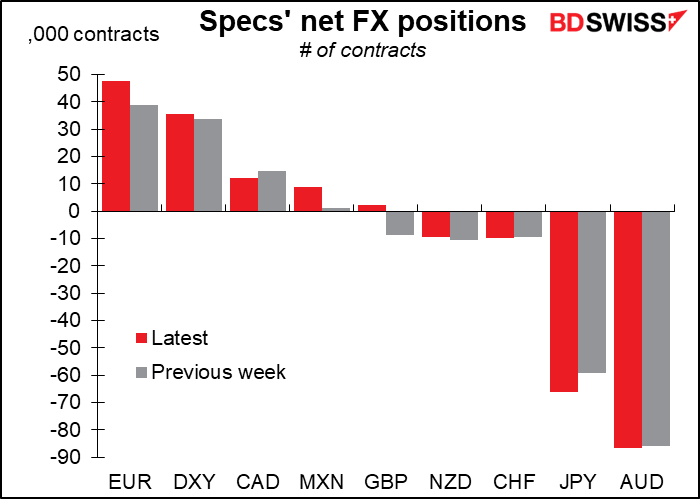 Hedge funds made some substantial changes in their positioning. They greatly boosted their long GBP positions while also boosting their short JPY and short EUR. On the other hand they trimmed their short MXN and AUD. 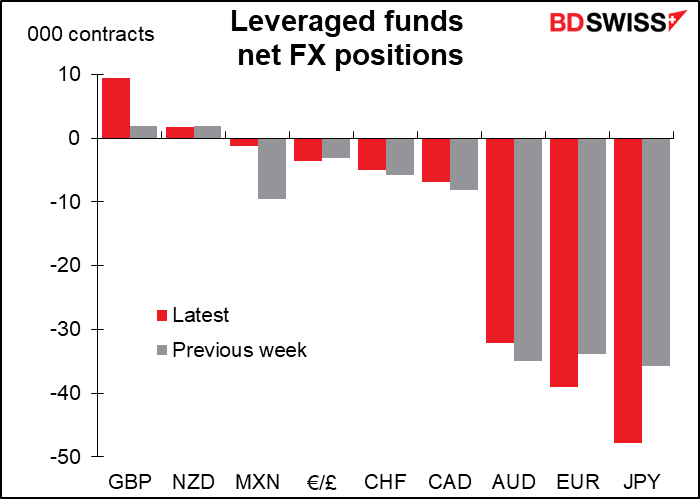 Retail increased their long EUR and short JPY positions, as did speculators. 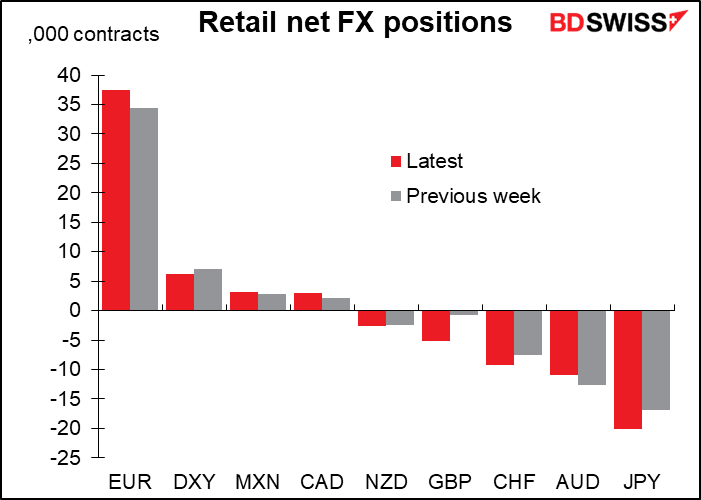 Precious metals:  Speculators also increased their long gold and silver positions slightly, although they remain within the recent range. 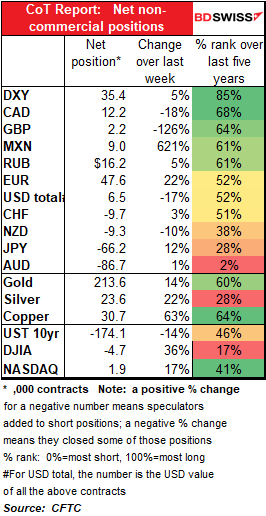 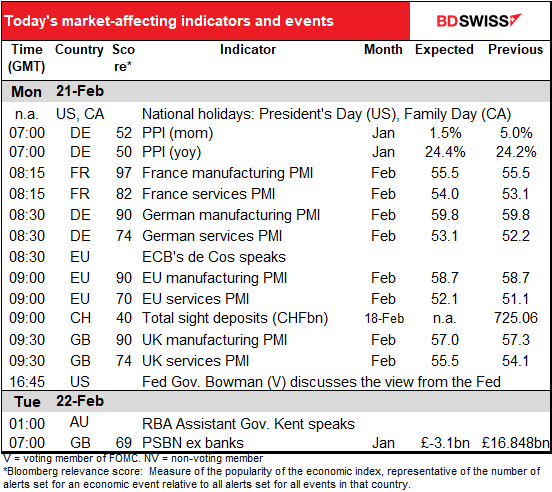 Today’s a holiday in the US (President’s Day) and Canada (Family Day) so nothing out from those two countries today. Which is important for the US at least, because the preliminary purchasing managers’ indices (PMIs) for the major economies will be released but they won’t be for the US.

Japan is already out. It was abysmal! Both manufacturing and services fell sharply. Somehow the composite PMI fell by more than either the manufacturing or services PMI, which I didn’t think was even possible. 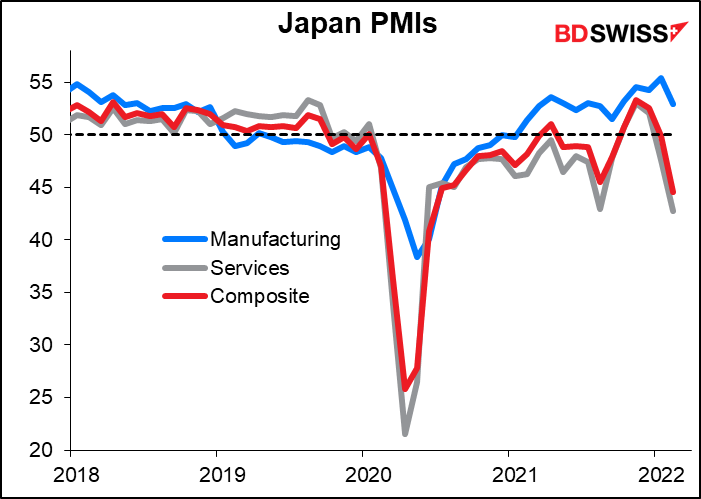 Japan has been the international outlier since the pandemic began, with worse performance for both the manufacturing and especially the service-sector PMI, which only briefly poked its nose above the 50 line that signifies expansion – and quickly plunged back below it. This was not the case before the pandemic, when Japan’s PMIs were largely in line with other countries.

Still, Japan’s poor performance in February makes me wonder whether the forecasts for the other countries aren’t perhaps a bit too rosy. 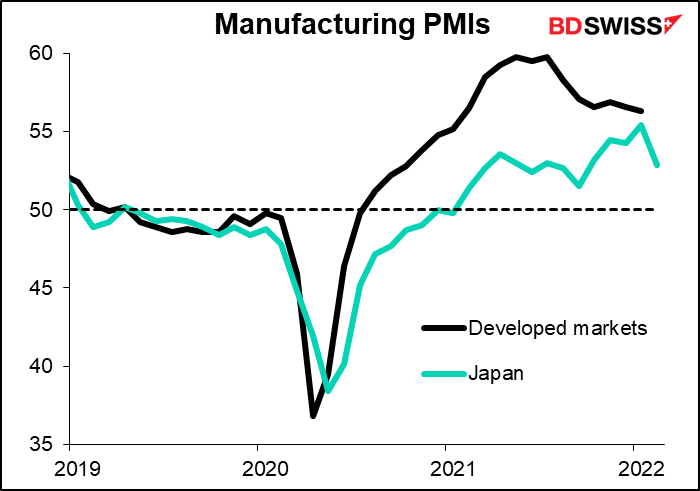 I admit I had to recheck my spreadsheet, but yes, the market consensus for France, Germany, and the Eurozone as a whole is that the manufacturing PMIs will be unchanged. For the UK and US, small changes not particularly significant.

The important point is the service-sector PMIs. If they improve during the month as expected it’s a good sign that the omicron variant didn’t impinge on economic activity much. That would be positive for global activity and therefore positive for the risk-sensitive AUD. 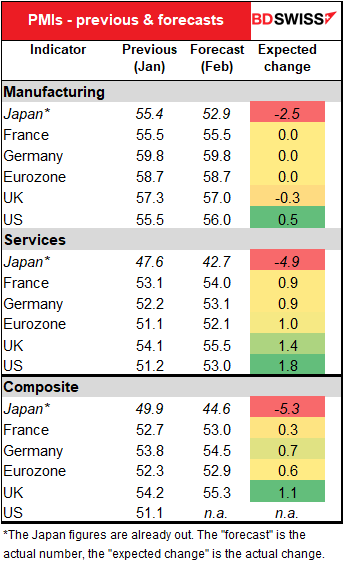 This would be pretty amazing, seeing as in February there have been 688k new cases of the virus a day in the Eurozone. This is down a bit from 873k a day in January but still alarmingly high – in December, the worst month up to then, there were “only” 257k a day. But apparently people are learning to live with the virus or accept it as a “known known” risk, as opposed to when it first emerged and was an “unknown known” risk that had many people terrified (including me). Perhaps that’s because of the far lower number of deaths now. The worst month for deaths in Europe was Jan. 2021, when there were 2,429 a day. In January this year there were 8x as many cases of the virus ( 873k a day vs 108k) but less than half as many deaths (1,104 a day vs 2,429). Still, there were only 114 deaths per day last July, meaning that the number of deaths is now about 10x the low point. The world has simply gotten used to living with a level of disease and death that would’ve been considered appalling and intolerable any time before. We live in interesting times. 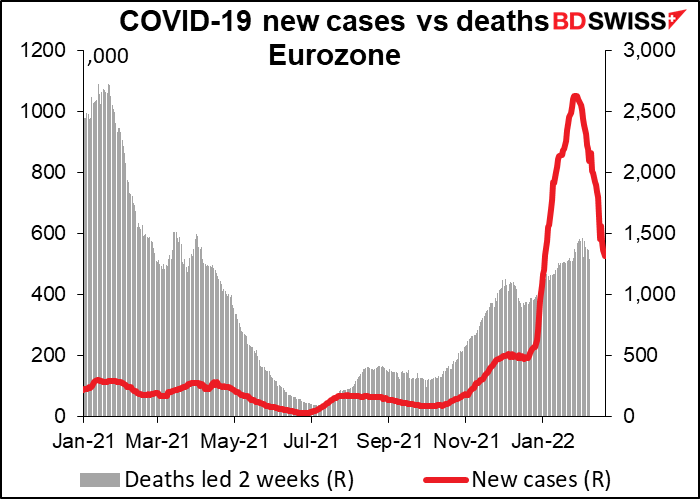 Other than that we’ll just be waiting to see the rather dull Swiss sight deposit data. The Swiss National Bank hasn’t done much of anything since the beginning of the year. Now as tensions over Ukraine heat up and EUR/CHF starts to fall again did they change their strategy? 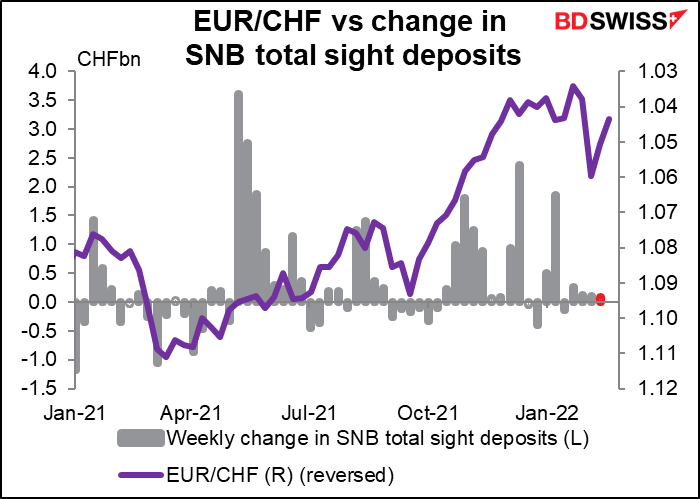 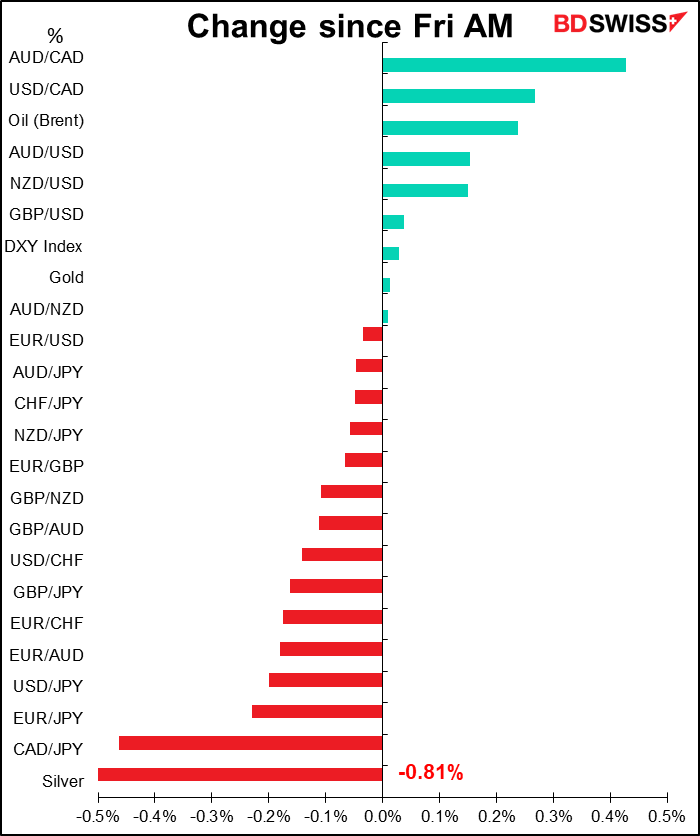