You are at:Home»MARKET PREVIEW»NZD Up on hawkish RBNZ, CHF Down on Weak Sanctions; BoE testimony 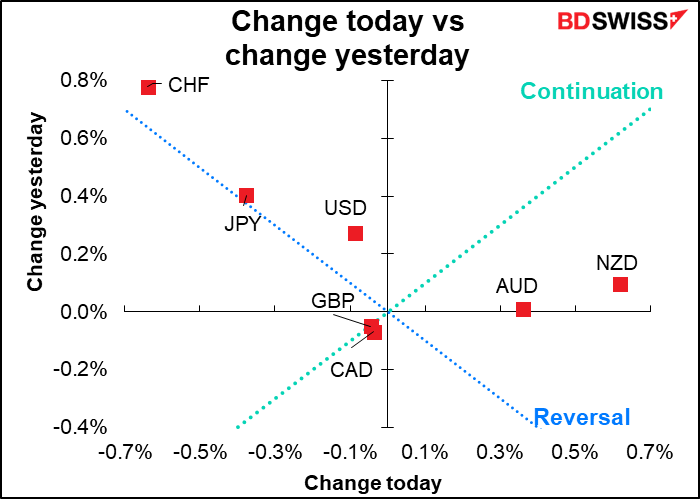 It’s all about Russia and Ukraine, as you can well imagine.

The US and several of its allies announced a coordinated round of sanctions in response to Russia’s moves, but these were not as tough as they might’ve been. The best indicator of that was the Moscow Exchange MOEX index, which finished the day up 1.6%. That figure hides the scope of the rally since the index opened lower and fell from there. From yesterday’s bottom to the close yesterday the MOEX index was up 11.7%, indicating significant relief that the sanctions weren’t worse. USD/RUB also fell 1.13%, i.e. RUB gained significantly vs USD.

(I’m not going to go through what the sanctions were – you can read that elsewhere.)

The sanctions were purposely light, however. US President Biden described them as a “first tranche.” The White House wants to reserve the ability to take additional actions if Russian forces move deeper into Ukraine.

There was one significant point in President Biden’s comments. He called it “the beginning of a Russian invasion of Ukraine.”  Previously he had angered the Ukrainians by saying that there might be only light penalties for an “incursion” into the country.

Nonetheless risk sentiment recovered on the light sanctions. Although the S&P 500 closed down 1.0%, the futures are up 0.5% this morning. Asian stock markets are also mostly higher, except for Japan of course as that market was closed for the Emperor’s Birthday. Brent oil is trading at $97.12/bbl, down from yesterday’s peak of $99.50. In the FX market, the safe-haven CHF and JPY, which had been the main beneficiaries of the flight to safety, came off sharply. 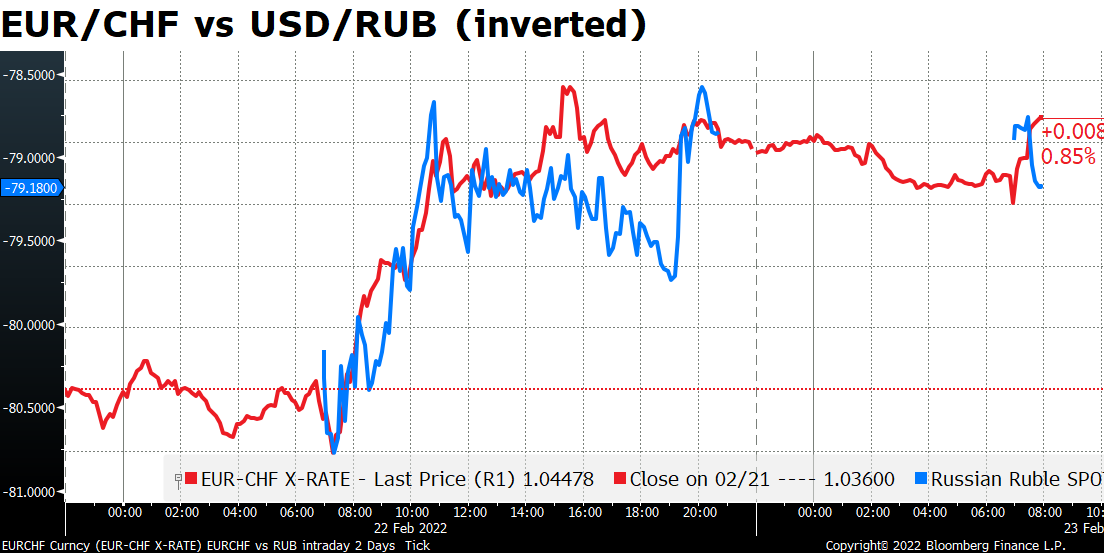 On the other hand, the risk-sensitive NZD and AUD gained (NZD perhaps more from the Reserve Bank of New Zealand decision – see below).  CAD failed to do much of anything despite the gyrations in the oil price however.

CAD seems to be torn between following oil and following USD/RUB.

The “flight to safety” didn’t affect the bond markets however as inflation fears – stoked by higher commodity prices – caused bond yields to rise. Aside from the rise in oil prices, London Metal Exchange nickel rose above $25,000/ton on an intraday basis, the highest price in over a decade, and corn futures hit a seven-month higher. The Bloomberg Commodity Spot Index rose 1.7% to a record high.

The fears of higher inflation are of course anathema to central bankers, who are busy trying to get inflation down. However the potential for more aggressive central bank tightening seems to be waning as risk aversion causes financial conditions to tighten. For example, the odds that the Bank of England might hike by 50 bps in March fell yesterday after a speech by Deputy Gov. Ramsden. He voted for a 50 bps hike a few weeks ago but seems less sure now. Although the Bank’s forward guidance states that “some further modest tightening in monetary policy is likely to be appropriate in the coming months,” he emphasized that “The word “modest” is significant here though.”

Is this the calm before the storm? Australian PM Morrison warned that Russia was “at peak readiness to now complete a full-scale invasion of Ukraine, and that is likely to occur within the next 24 hours.” A full-scale invasion would result in a big increase in risk aversion, with a resulting fall in stock markets and rise in oil and gold prices. Risk aversion would probably send CHF and JPY up sharply and the commodity currencies lower. I won’t venture a guess at what Russia is likely to do – I leave that up to everyone to decide for themselves.

As for the Reserve Bank of New Zealand (RBNZ), they hiked by 25 bps, the low end of estimates, but otherwise they were quite hawkish. They said they would start running down their bond holdings under the Large Scale Asset Purchase (LSAP) program “through both bond maturities and managed sales” of NZD 5bn per FY to the Treasury Department (rather than selling them on the open market).

Furthermore, the new forecasts in their updated Monetary Policy Statement show the Official Cash Rate (OCR) rising to 2.5% over the next 12 months and peaking at about 3.25% at the end of 2023. In the November MPS it had forecast a peak of about 2.5%. 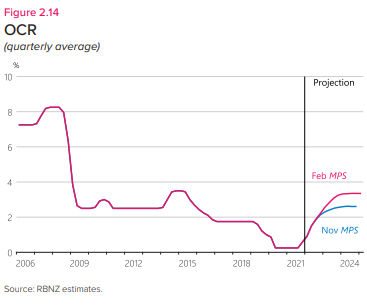 There was indeed a big debate about whether to hike by 25 bps or 50 bps. “Many members saw this as a finely balanced decision,” according to the minutes. The Committee came to a consensus to hike by 25 bps but said “it was willing to move the OCR in larger increments if required over coming quarters.”

Following the meeting, rate expectations for the OCR rose. It’s particularly noticeable how the forecast rate hike at each meeting rose to factor in the possibility of a 50 bps hike each time. 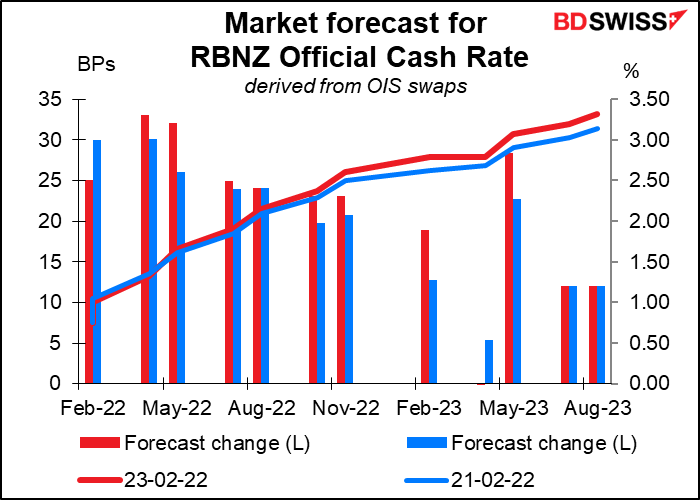 As expected, the news was positive for NZD. I think the currency can appreciate further. In his press conference, RBNZ Gov. Orr described the current outlook for New Zealand’s economy as “business as usual.” I’m not sure there’s any other central banker around willing to say that about his or her economy. I think this optimism is likely to support NZD going forward, possibly pushing AUD/NZD down further.

Gov. Orr’s optimism may relate to the country’s success in managing the virus. Although cases have soared from virtually none to around 2,000 a day, deaths are minimal – only 58 people in the whole country have died so far (out of a population of 4.9mn) and most of those deaths were back in November and December. (The right-hand scale isn’t a mistake – the maximum is one death a day on average.) 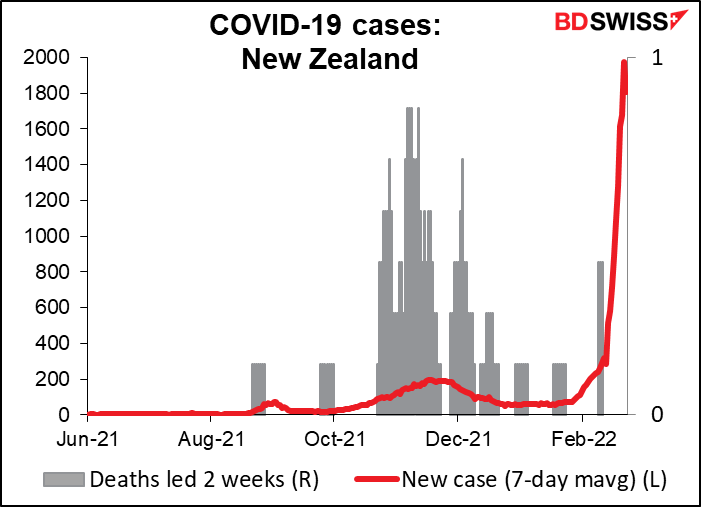 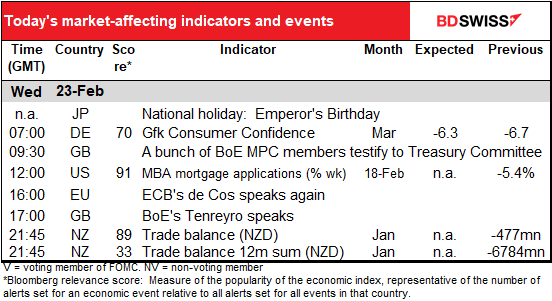 Today’s a difficult day for me – I get paid by the word but I’m not sure that even I can manage to write enough about today’s indicators to pay for lunch.

The only excitement of the day might come when Bank of England Gov. Bailey and several members of his Monetary Policy Committee coterie (Deputy Gov. Broadbent, Jonathan Haskel, and Slivania Tenreyro) testify to Parliament’s Treasury Committee.

I expect they’ll discuss the recent (Feb. 3rd) MPC meeting, which voted 5-4 to hike rates by 25 bps. Three of this group voted for the 25 bps hike while Mr. Haskel and three of the others wanted to hike by 50 bps. The interesting thing will be how they explain their votes and what if anything they say about the next meeting, which will be held on March 17th. Note that the market is pricing in a chance of more than a 25 bps hike at either this meeting or the next. If it seems like one of the 25 bps crew is leaning toward joining the 50 bps group, GBP could appreciate. On the other hand, if it seems like Mr. Haskel is becoming less convinced of the need of 50 bps, as was Deputy Gov. Ramsden overnight, then GBP may weaken.  Remember that Britain’s January consumer price index (CPI) was higher than expected at -0.1% mom (-0.2% expected), +5.5% yoy (5.4% expected). That may have swayed someone. Or maybe not – maybe they’re worried about the impact of the Ukraine crisis. We’ll have to see. 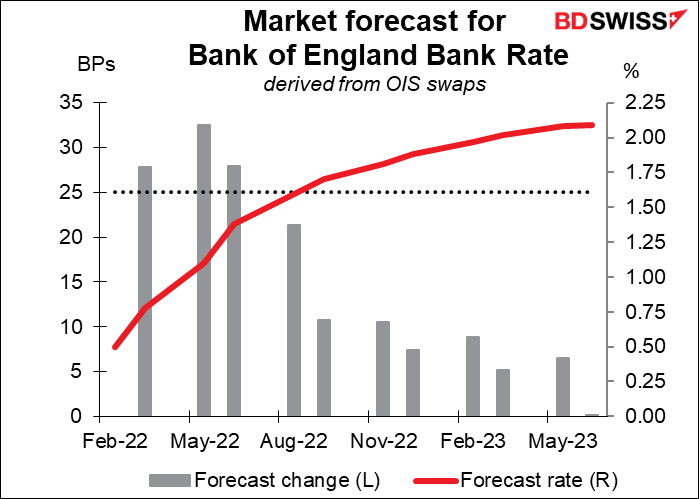 The Mortgage Bankers’ Association (MBA) mortgage applications are running at almost the same high pace as last year. That portends a strong housing market, which means the Fed can start to hike rates without worrying that maybe they’ll crash the housing market. USD+ 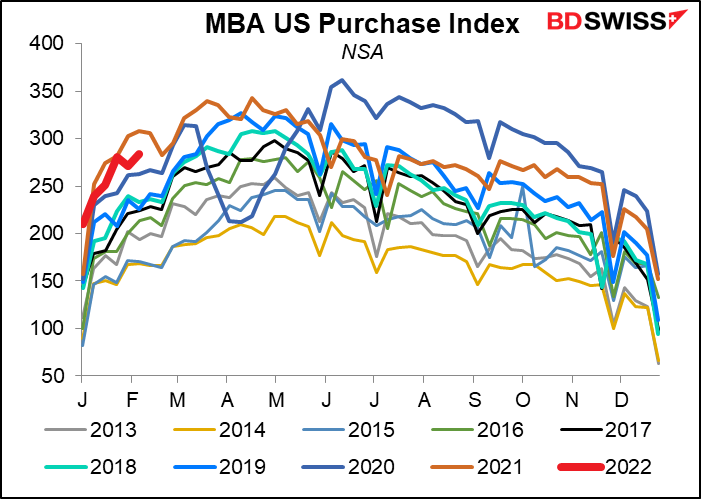 After that, not much until the New Zealand trade data overnight, and even that isn’t so thrilling – there aren’t any forecasts. 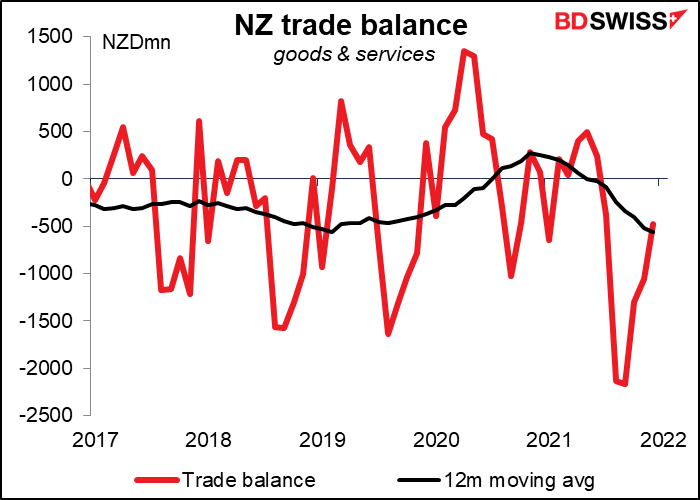 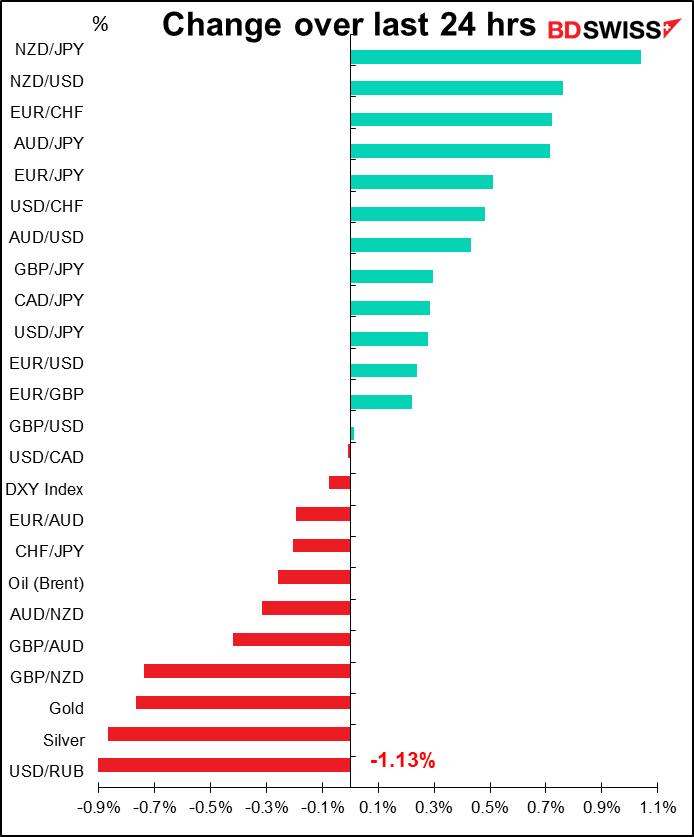