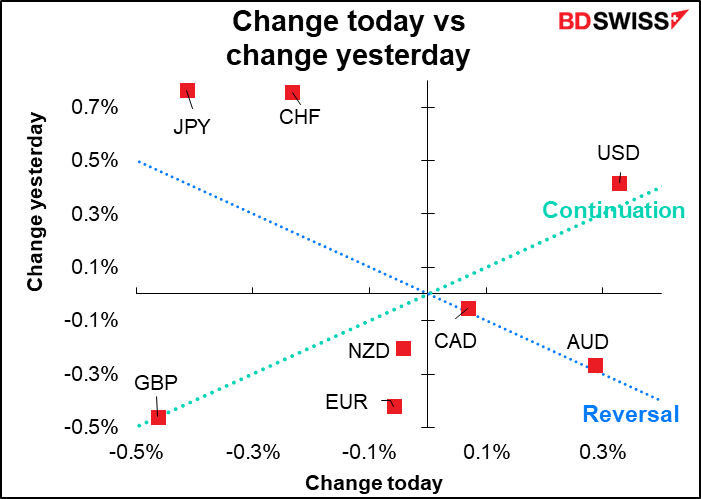 I long ago resolved never to use this overworked, cliché phrase, but I can’t avoid it today: what a difference a day makes!  Markets were pretty dismal during much of the European day yesterday, with the Euro STOXX 50 down 5.2% at one point and Brent up 8.3% at $105.79/bbl.

But then as the details of the sanctions came out. US President Biden focused on affecting Russia from a financial and technological standpoint. He targeted all 10 of Russia’s largest financial institutions, which comprise nearly 80% of Russian banking sector assets. But the market was relieved that he didn’t yet put any sanctions on energy nor did he restrict Russian access to the SWIFT payment system. Furthermore he said more oil could be released from the Strategic Petroleum Reserve if necessary.

Sentiment turned around sharply after President Biden spoke. Brent for example fell to $98.29 at one point, down 7.1% from its peak (it’s currently trading at $101.17, still extremely high). The turnaround in oil helped market risk sentiment in general. The S&P 500 opened down 2.6% but closed up 1.5% for a round-trip of 4.2%. As usual the NASDAQ was even more volatile. Gold is down 1.2%.

One particularly remarkable aspect of this remarkable day was that the Russian ruble collapsed totally. I thought it was bad before, but USD/RUB is up 5.2% this morning – and that’s well off the highs – it opened 8.9% higher yesterday at a record high (= record low for RUB)! That’s one of the biggest moves I’ve seen in a currency in one day without some official action, if we can say that invading another country doesn’t count as “official action.”

There was some “official action” in reaction though – they closed the Moscow Stock Exchange for a few hours and the Central Bank of Russia (CBR) said it will intervene in the FX market for the first time in years and also took some other steps to provide liquidity to banks. It doesn’t appear that they intervened though. Perhaps the mere threat was good enough for now. No increase in rates but Gov. Babiullian has already raised rates by 525 bps since March.

This meant that assets that had been tracking USD/RUB diverged. Gold, for example.

But if you really want to see volatility, you have to look at the MOEX index of Russian stocks. I don’t know if I’ve ever seen anything like this. It hasn’t been doing very well recently as you can imagine. Nonetheless it still managed to open down 11.1% and continue falling. At one point it was off 45.4% on the day! (This isn’t the worst-ever fall in a stock market. Bloomberg says that Argentina once fell 53% in a day.) It managed to rebound 20% from the lows, but that still means it closed down 35% on the day. This morning though it’s bounced back and is trading up 22%.

The turnaround in market sentiment didn’t change people’s attitudes about the Fed. The odds of a 50 bps hike at their meeting next month continued to shrink and the number of rate hikes expected this year declined. People think that the crisis may slow central banks but not derail them. 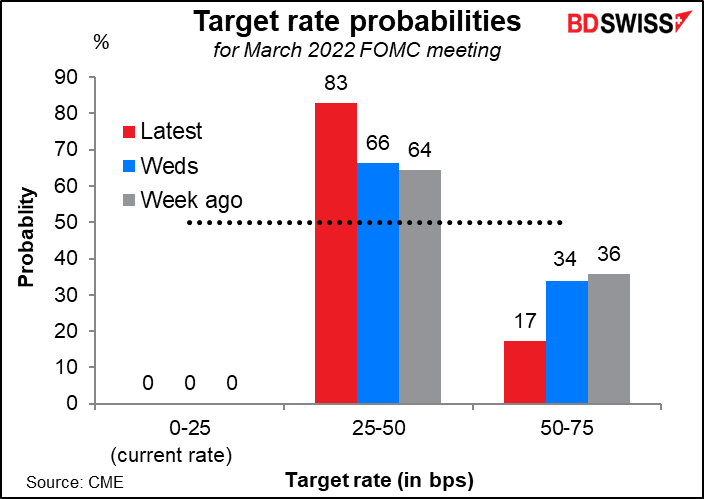 That’s the guidance officials are giving, too. Cleveland Fed President Mester (V), one of the more hawkish members of the Federal Open Market Committee, said that “the implications of the unfolding situation in Ukraine for the medium-run economic outlook in the US will also be a consideration in determining the appropriate pace at which to remove accommodation.” And in Europe, Austria Central Bank Gov. Robert Holzmann, one of the ECB’s biggest hawks, made similar comments in an interview with Bloomberg. “It’s clear that we’re moving toward normalizing monetary policy. It’s possible however that the speed may now be somewhat delayed.” 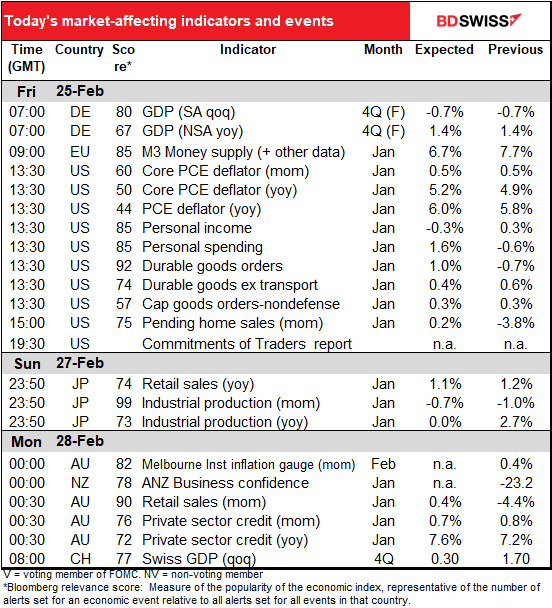 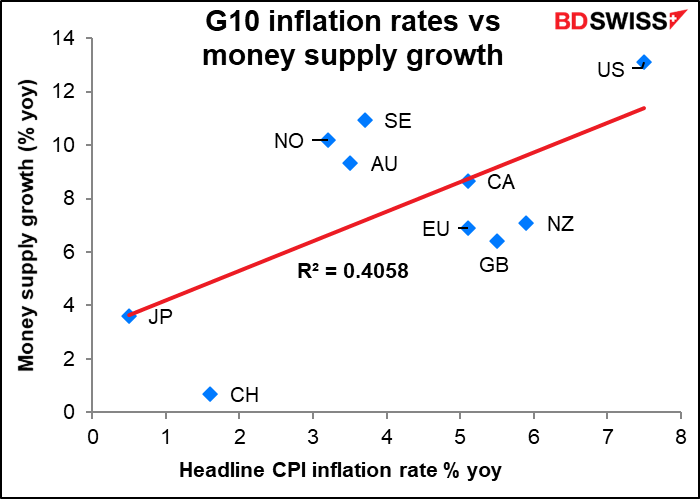 Of course if I remove the US, Japan, and Switzerland from the graph I can prove just the opposite, too. Maybe that’s why they don’t pay much attention to money supply growth any more. Among the data in this announcement is Eurozone bank lending. That’s been headed upward recently, which should reassure the ECB, especially as most of the rise in growth comes from non-financial corporations and not just people chasing the housing market. 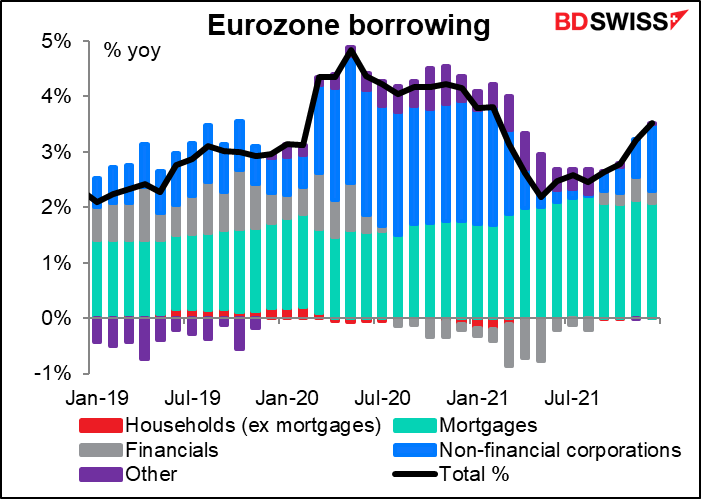 After that we sit calmly and wait for the star of the show, or at least today’s star, to appear:  the US personal income & spending data with their sidekick, the personal consumption expenditure (PCE) deflators.  These, and not the consumer price index (CPI), are the Fed’s preferred inflation gauges. They made the switch in the Fed’s Humphrey Hawkins report of February 2000.

However, the market clearly pays more attention to the CPI than to the PCE deflators, if we can judge from the Bloomberg relevance scores (60 for the highest-rated PCE deflator vs 96 highest-rated CPI measure). And my impression is that Fed officials do too, even if they phrase their forecasts in terms of the PCE deflators. For example, in his press conference in December, Fed Chair Powell mentioned the CPI several times but didn’t mention the PCE deflators at all. In explaining why they decided to speed up the taper, he said,

We got the labor market report two days after the meeting. And then one week after that, I think on the 12th of November, we got the CPI reading. It was really the CPI reading in concert with those two. And I just came to the view over that weekend that we needed to speed up the taper.

So while I’ve placed more emphasis on the PCE deflators than on the CPI, I give up. This isn’t the way they really think.

In any event, the PCE deflators are expected to be higher today. How much higher and particularly whether they come in higher than expected is the big issue. A further rise in inflation is likely to be positive for the dollar, especially as risk sentiment comes back. 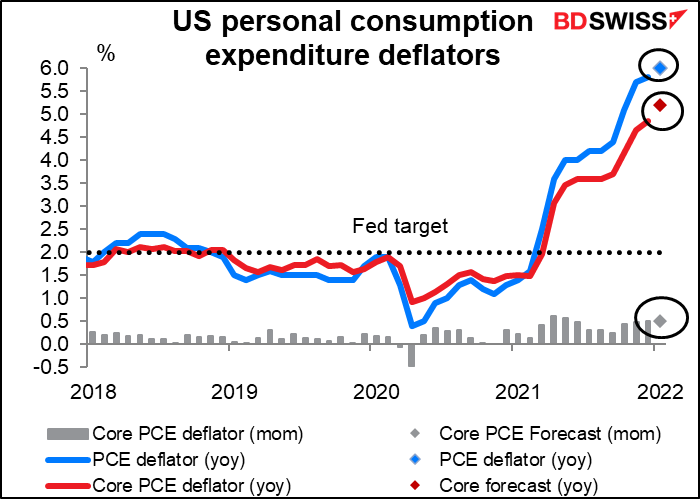 Moreover the core PCE deflator, which is supposedly the Fed’s preferred inflation gauge, shows no signs of slowing down. The market consensus forecast for the month-on-month change would mean the annualized three-month change would leap to +6.1% yoy from +4.9%. All told the data are likely to confirm the Fed’s view that they have to do something ASAP to slow inflation. That should be USD+.

As for the personal income & spending, incomes are expected to be down 0.3% mom and spending up 1.6% mom. Sounds like my family. 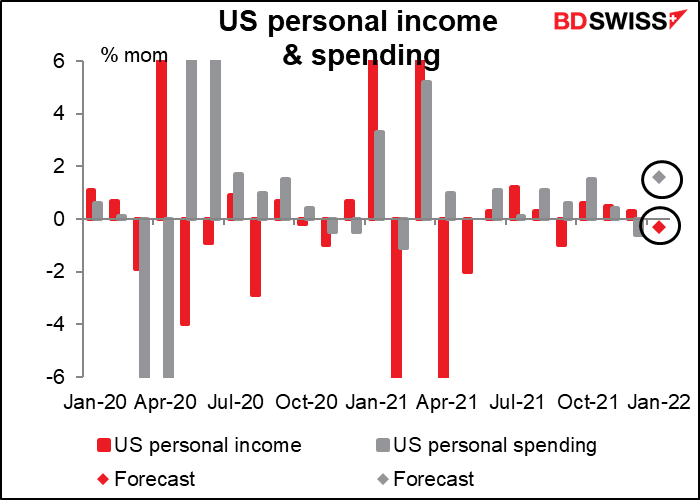 That would still leave incomes 10.5% above pre-pandemic levels and spending 12.1% above so pretty healthy nonetheless. 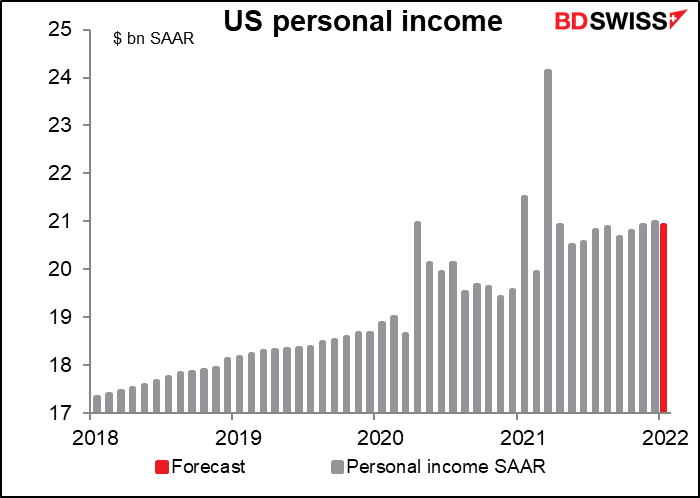 US durable goods orders are expected to be up a robust 1.0% mom. That’s above the six-month moving average (+0.7% mom) and so shows some signs of improvement. 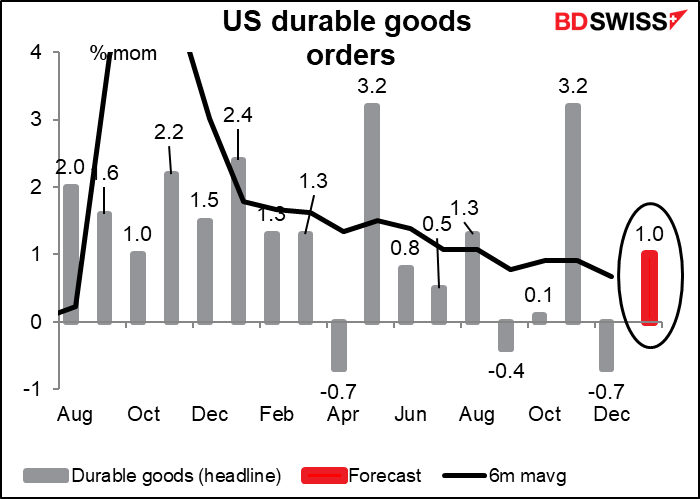 The acceleration may be due to a big order of planes at Boeing. Excluding transportation equipment, it’s expected to be up only 0.4%, below the six-month moving average of +0.6%. This might be considered a slowdown, which could be negative for USD. But I expect the progress of the war in Ukraine and, if not that, the further rise in the PCE deflators will prove more influential on the market than the durable goods orders today. 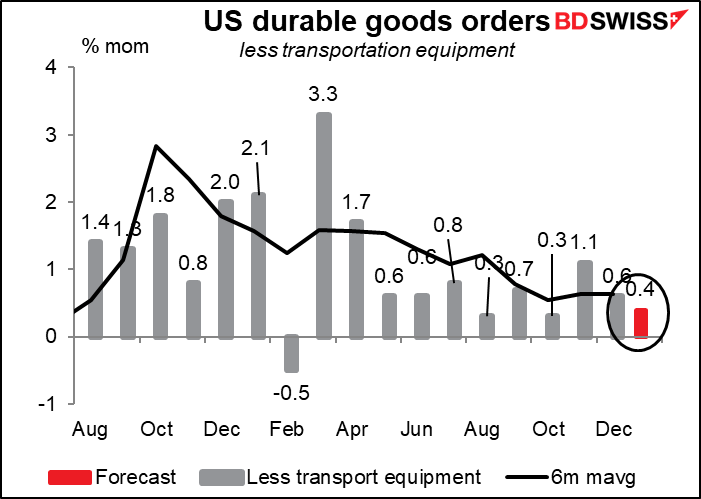 Finally, early Monday Japan announces its industrial production data. It’s supposed to be down from the previous month – odd, since the manufacturing PMI rose 2.5 points to the highest level since Feb. 2014.