You are at:Home»Market Preview»Safe Havens Up, Commodity Currencies Down as Russia invades Ukraine; US jobless claims, Tokyo CPI 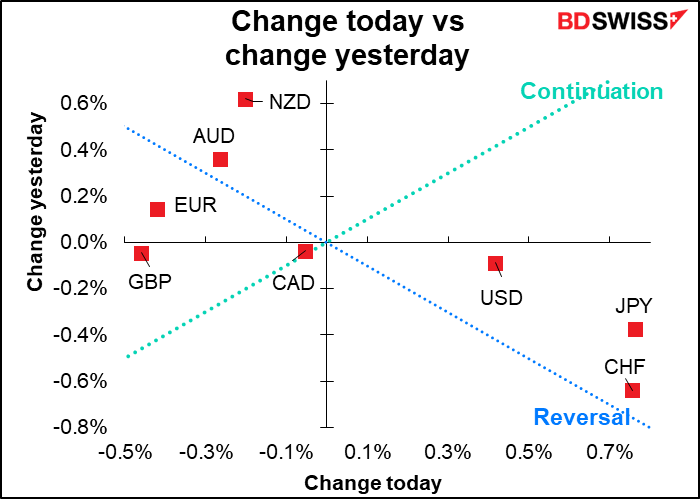 A simple and easily-to-understand market: Russia invades Ukraine, US President Biden promises “severe sanctions on Russia,” and the markets go full “risk-off” mode. The safe-haven JPY and CHF soar and the growth-sensitive commodity currencies fall, even though prices of many commodities are up sharply. 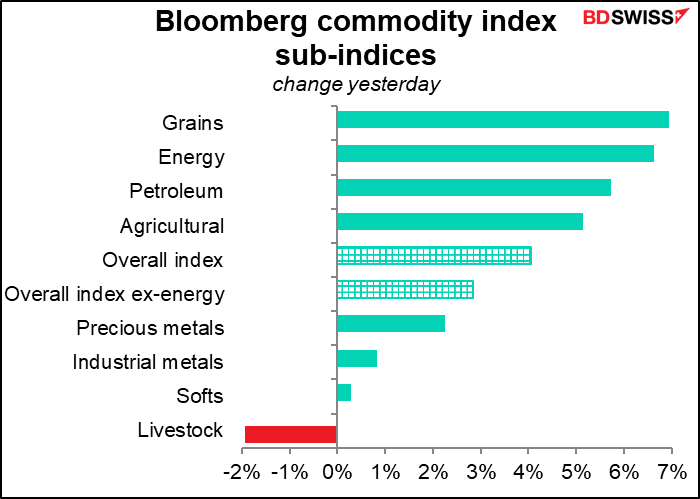 Note that although energy prices soared (European natural gas was up 11.4%, Brent oil +5.3%), it was the grains index that rose the most. Wheat futures rose 3.8% to their highest in almost 10 years while soybean futures rose 2.5% to a record high. The invasion is important for EU inflation because Ukraine supplies 4.9% of all EU food imports.  Food is much more important for inflation rates than energy prices; food & nonalcoholic drinks have a weight of 174.2 in the EU CPI, more than double the 68.01 for electricity, gas, and other fuels (total = 10,000).

A lot of the money pouring out of stocks apparently went into bonds, which rallied sharply.

This is despite a continued rise in inflation forecasts. Two-year US breakevens rose an enormous 21 bps. In Europe, German 10-year breakevens hit the highest levels since 2011 while the 5yr/5yr forward inflation swap (the market’s estimate for inflation for the five years starting five years from now), the ECB’s favorite gauge of market inflation estimates, rose 10 bps on the day. 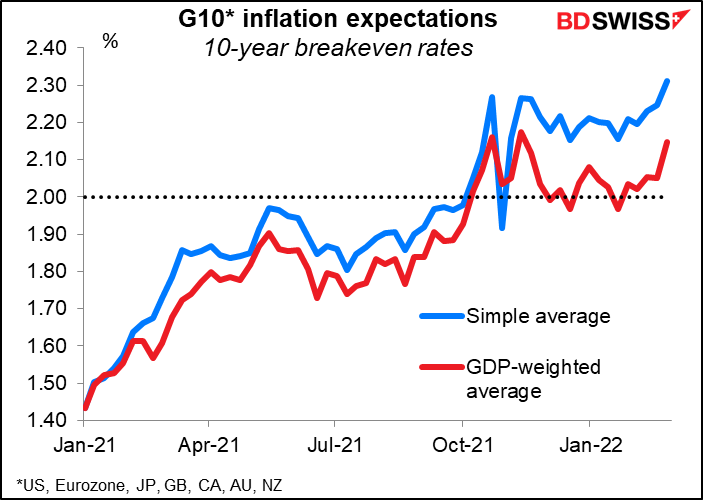 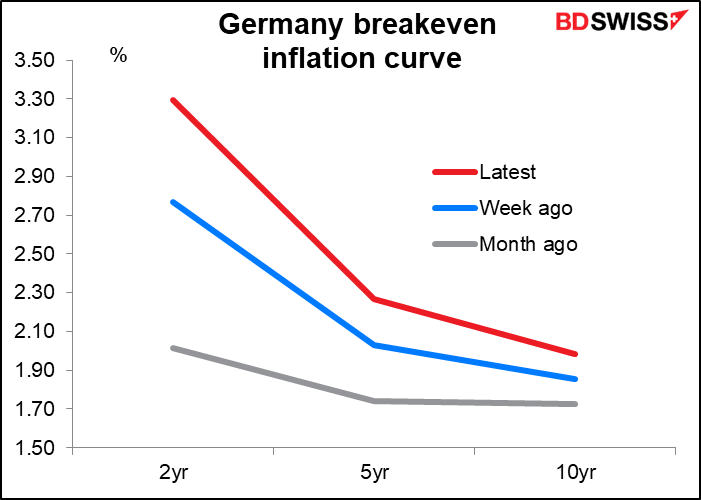 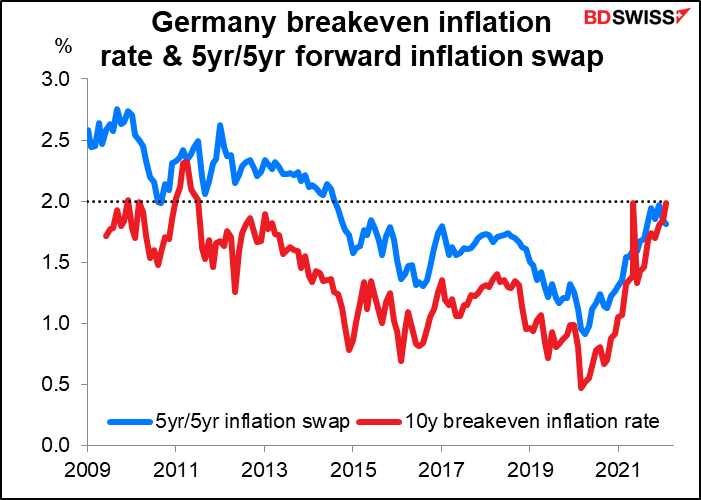 As a result, real yields fell sharply. Note that Canadian real yields actually rose a bit but this plus surging oil prices didn’t offer much support to CAD – it was just fell the least of the commodity currencies.

The surge in inflation expectations due to the increase in uncertainty puts central bankers in a conundrum. Do they tighten faster to dampen rising inflation and inflation expectations or do they keep rates low for longer to promote stability? It looks like markets are assuming the latter. The odds of a 50 bps hike at the March meeting, which was seen as a near-certainty after the January CPI came out (94% on Feb. 10th) is now down to only a 21% probability. 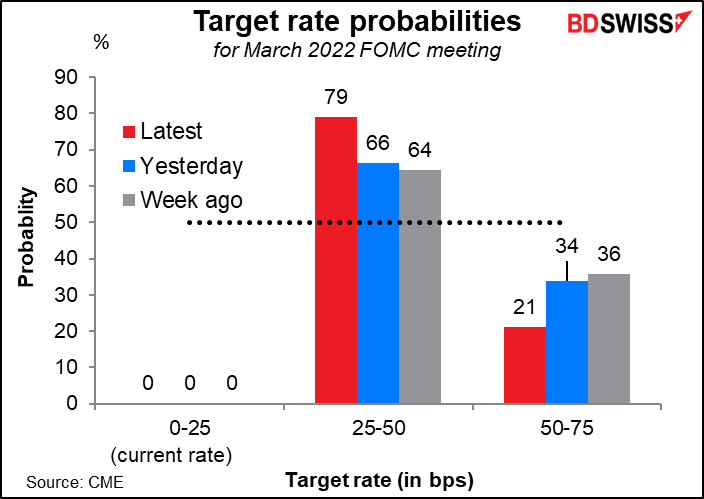 That may work against the currencies that are being supported by expectations of higher rates, such as USD and NZD. It may also work in favor of gold, which is usually hurt by higher interest rates.

ECB Chief Economist Lane yesterday said in an interview that “the data clearly suggest that we could be moving closer to our medium-term target.” But he also noted that geopolitical events have to be taken into account too. “These not only have implications for oil and gas prices, but also for investor confidence, consumer confidence, trade and so on.” We’ll have to see at their March 10th meeting how they balance these two factors. The market’s estimate for ECB rates was unchanged on the day. 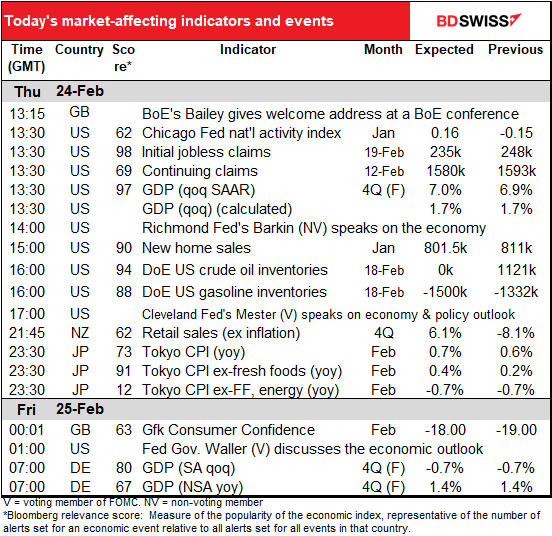 The Bank of England will hold the First Annual Bank of England Agenda for Research (BEAR) Conference. The topic this inaugural year is “The Monetary Toolkit.” Gov. Bailey will make some introductory remarks that I’m sure will be fascinating. At 1600 GMT there will be a Policy Panel on Unwinding QE moderated by BoE Deputy Gov. Ben Broadbent and featuring San Francisco Fed President Mary Daly (NV) and European Central Bank Governing Council member Isabel Schnabel as well as someone from the IMF and a professor from LSE. The conference will continue tomorrow but with no one you’ve ever heard of except the closing remarks by Bank of England Chief Economist Huw Pill.

Fortunately the weekly US initial jobless claims are always worth watching. They unexpectedly rose by 23k last week, which was unfortunate since last week was the survey week for the February employment data. This week they’re expected to retrace about half that increase.

If you look at the four-week moving average, which is what people focused on before the pandemic made this one of the hottest indicators around, it’s been pretty steady around 245k-255k for the last couple of weeks. So while we can focus on every little up & down of the indicator, in fact it seems to be back to normal and trending sideways for now. 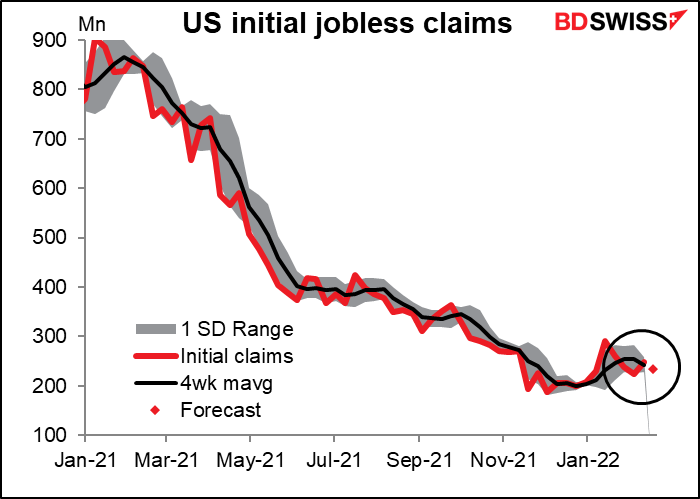 The final revision of US Q4 GDP is probably of more interest to economic historians at this point than to the market.

That’s that, then. We can relax until it’s morning in the Land of the Rising Sun and Japan announces the Tokyo consumer price index (CPI).  It’s expected to rise slightly but still be several standard deviations below any other country’s inflation rates. 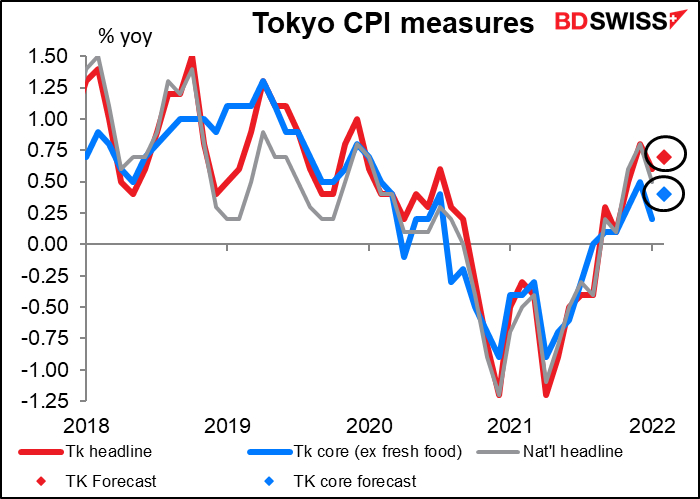 Since I don’t have much to write about today, let me explain in part why Japan’s inflation rate is so low recently. If we look at last week’s January nationwide CPI (+0.5% yoy, down from +0.8%), the main reason inflation fell was because of accommodation fees. The “Go To Travel” campaign from July to December 2020 subsidized the cost of travel (hotels & trains) for Japanese residents in an attempt to make up for foreign tourists, who were prevented from entering the country. Since the program ended in December 2020, accommodation fees in the CPI for December 2021 soared 44% yoy, lifting overall CPI inflation by 0.29 percentage points (ppt). That factor disappeared in January 2022, which caused the yoy rate of inflation to fall back again.

Unfortunately I don’t have the data for hotels specifically, but from the data I do have, it looks like energy & utilities (black bars) pushed up the national CPI by 0.85 ppt and food (grey) pushed it up by 0.54 ppt. On the other hand, transportation and communication (blue), which includes mobile telephone charges, pushed it down by 1.12 ppt. The government forced mobile phone companies to lower their charges dramatically from April 2021. The impact of that move, -1.51 ppt in January, will fall out of the calculation in April this year. We’ll see what happens with Japan’s inflation rate – and the yen – then. 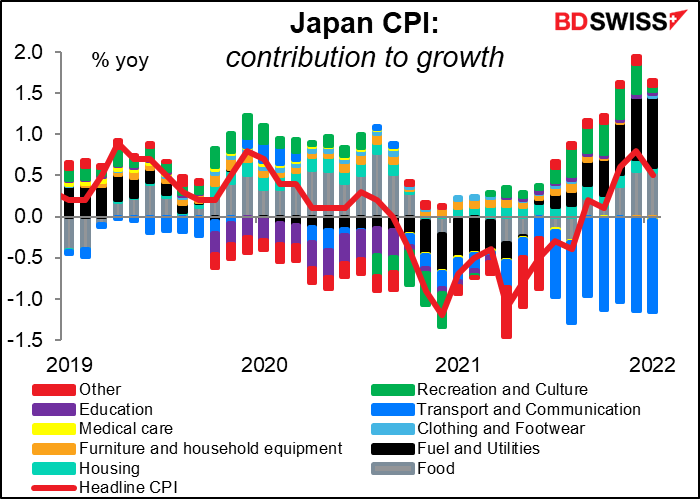 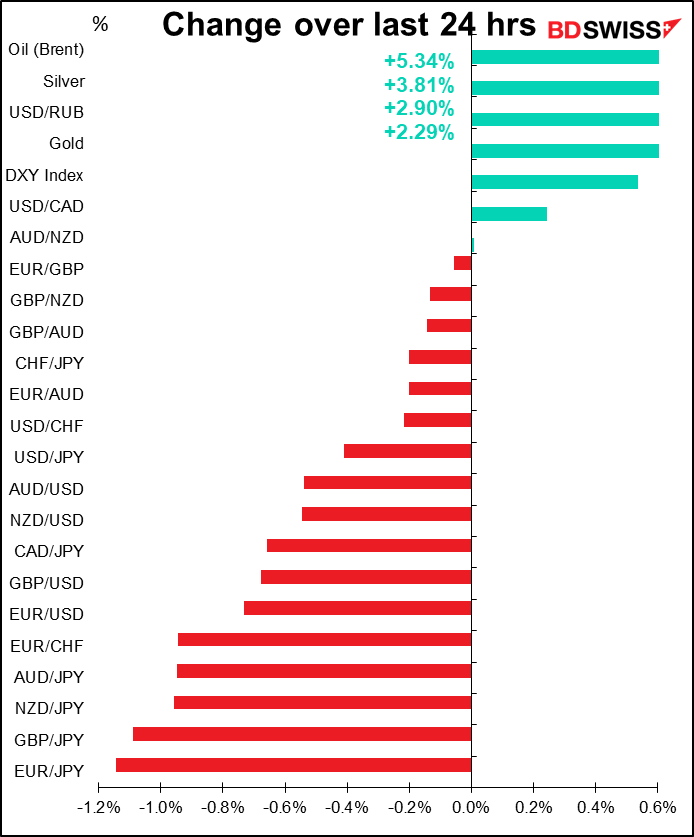