You are at:Home»Market Preview»EUR Up on Macron Victory, JPY Down on Widening Yield gap; Japan PPI, UK Employment (tomorrow) 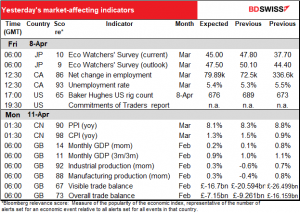 EUR gapped higher at the opening Monday as it became clear that President Macron was ahead in the French election by more than the polls had suggested. Preliminary results show him winning 27.6% of the vote vs 23.4% for his main opponent, Marine Le Pen.

The boost quickly faded though as traders considered the uncertainty around the second round to be held in two weeks. The key will be what the 22% who voted for left-wing Jean-Luc Melenchon do. While he urged them several times not to vote for Le Pen, he did not urge them to vote for Macron. Many are expected to abstain. This is the wild card for the election. Meanwhile the far-right Éric Zemmour in fourth place with 7.1% endorsed Le Pen, while the center-right Valérie Pécresse in fifth place with 4.8% endorsed Macron.

Three exit polls suggest Marcon is likely to win by at least 54%-46%. Remember though that the polls said Trump had only a 30% chance of winning in 2016.

While the two-week risk reversals fell as they now encompass the run-off election date, the longer-dated risk reversals are higher, indicating that the market sees less long-term risk from the election. 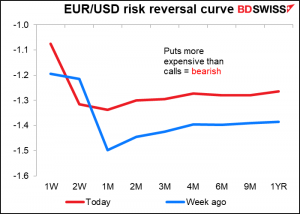 The results showed the collapse of the traditional French political structure. Valérie Pécresse, who represented the conservative Les Républicains, scored below 5%, the lowest result ever for her party. Meanwhile, Socialist Paris Mayor Anne Hidalgo didn’t even reach 2%. As a result the two parties that controlled French politics for decades now got less than 10% of the vote together. The traditional divide between the left and the right is no longer relevant in France. Instead, there is a fight between a mainstream pro-European bloc that is open to the outside world vs nationalists who want a more isolationist stance on the other. 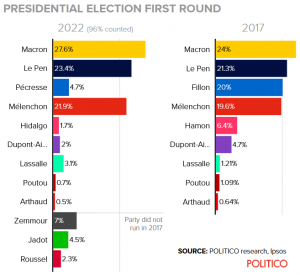 Meanwhile, JPY fell (USD/JPY rose) as US yields continued to climb but Japanese yields remain straitjacketed by the Bank of Japan’s Yield Curve Control (YCC) policy. Ten-year US Treasuries this morning were trading at 2.77%, up from 2.71% at Friday’s close. Meanwhile Japanese 10-year yields can’t rise above 0.25%. 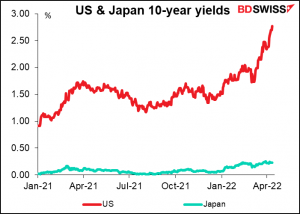 Speculators made few large changes in their positions. They flipped from modestly short CAD and MXN to modestly long and trimmed their AUD shorts, but that’s about it. They added to their EUR longs. Overall the change meant a slightly less long USD position. 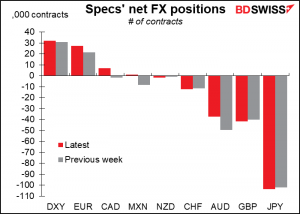 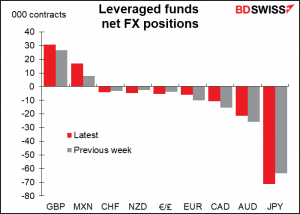 Retail investors were bullish the commodity currencies – they increased their long CAD, AUD, and (small) NZD positions. On the other hand, they trimmed their long EUR. As for their shorts, they trimmed their short JPY and CHF positions too, which goes along with adding to the commodity currency longs. They also added to their GBP shorts, the opposite of what hedge funds are doing. 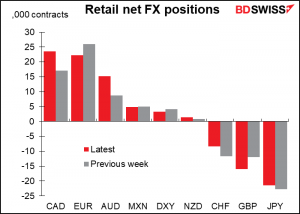 Precious metals:  Speculators trimmed their long gold and silver positions a bit, but we haven’t had a significant change in their positions in quite some time. 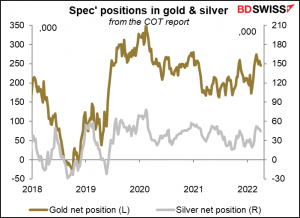 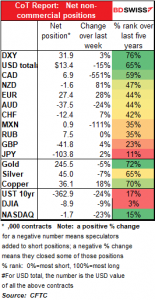 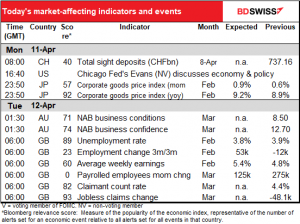 The big event for the day, the UK “short-term indicator day,” is already out. As shown in the table at the top, GDP was mixed (mom figure missed expectations but 3m/3m beat) while industrial & manufacturing production was way below estimates – it fell instead of rising as expected. Meanwhile the trade deficit narrowed but not as much as expected. GBP- 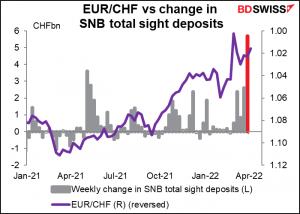 However you can see that this is nothing new for the SNB. In the past they’ve done much much more when they wanted to hold the line. Today’s figure will be interesting to see if they increase it again. That would be a signal that they’re frustrated and want to see EUR/CHF come back up. 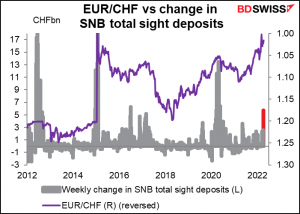 Then that’s it’s for indicators until the Asian day starts up, at which point we get the Japan corporate goods price index (aka producer prices). The mom change is expected to still be quite high but the yoy rate is forecast to come down marginally by 0.1 percentage point. 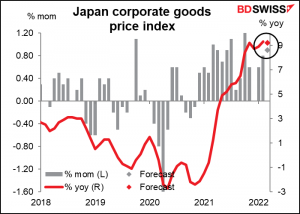 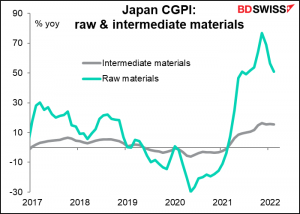 Will it ever push the consumer price index (CPI) up significantly? We’ll have to wait and see. The first hint we’ll get of the underlying inflation picture in Japan is May 5th, when the Tokyo CPI for April will be released. The cut in mobile phone charges a year earlier will have fallen out of the calculation by then and we’ll get a more accurate picture. 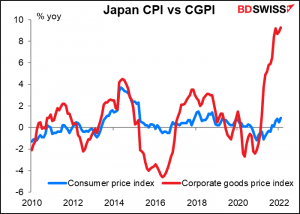 The BoJ is starting to get worried about, of all things, too high inflation! They do a quarterly survey of the general public’s views and behavior. An increasing percentage of people are saying that prices “have gone up significantly.” 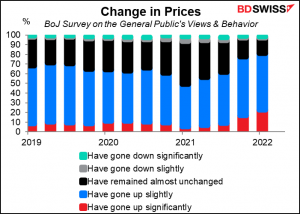 IF we add together the percent that think prices have gone up “significantly” with those who think it’s gone up “slightly,” the percent of people thinking prices have risen isn’t as high as it was in the boom times of 2007/08, but it’s getting there. 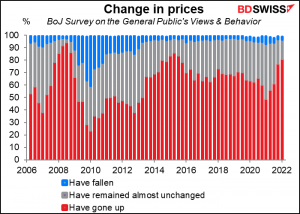 Generally speaking, people don’t like it, but then again that’s nothing new. They never have. The survey has been taken every quarter since Q2 2006. At most, 4.6% of the respondents viewed the increase in price as favorable. They may find that economists believe 2% inflation is optimal, but the general public doesn’t necessarily share that belief. 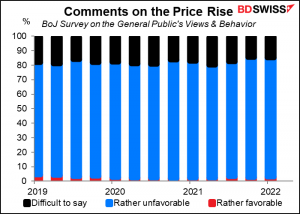 There’s no forecast for the National Australia Bank (NAB) business conditions indices, but I’ll give you a graph anyway so you can see the trend. 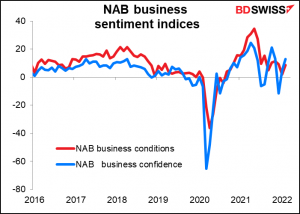 Then early Tuesday morning in Britain we get the UK employment data. Even though it has the remarkable Bloomberg relevance score of zero, the payrolled employees month-on-month change is the most important of these figures as it’s the most accurate and most up-to-date (note that it’s for March whereas the unemployment and change in employment data are for February).

The number of payrolled employees is expected to go up but not by as much as in the previous month. In February the government loosened many of the COVID-19 restrictions, as shown by the change in the Oxford Stringency Index, which measures how severe the restrictions on activity are in response to the virus. The index fell from 42.1 in January to 17.6 in February. It only fell a bit further, to 13.0, in March, hence less of a boost to employment.

Still, a rise of 125k would be in line with the six-month moving average of 124.3k, which I suspect is how a lot of economists make their forecasts. I could do that too and for a lot less money than they’re getting. 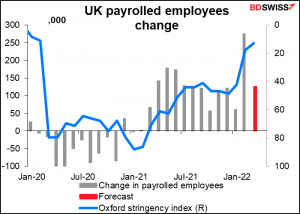 As for the February data, employment is expected to rise modestly after two months of declines while the unemployment rate is forecast to fall further. Last month’s 3.9% was already equal to the January 2020 low, before the pandemic; the forecast 3.8% rate this month would equal the lows of 2019, which in turn were the lowest since 1975. 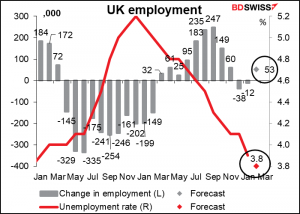 Meanwhile, average earnings are expected to rise at a slightly faster pace although not as fast as inflation is rising, so in real terms workers are losing out.  Thank heaven! We’d hate to see anyone paid hourly or weekly actually improve their financial situation. That might leave less for the bosses to skim off just when some pre-owned Russian yachts are likely to come on the market at bargain prices.

Still, that probably isn’t good enough for the Bank of England, which wants workers to show “restraint” during a year when their standard of living is expected to take the greatest hit since WWII. With employment nearing the record low and wages still rising above their target rate for inflation, the Monetary Policy Committee is likely to feel reassured that they can indeed keep hiking rates without trashing the economy. The result is likely to be additional pressure for a 50 bps hike at the May 5th MPC meeting. That pressure is likely to send the pound higher, in my view. 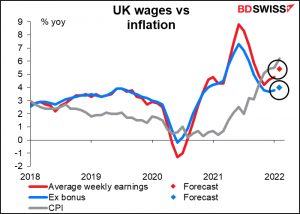 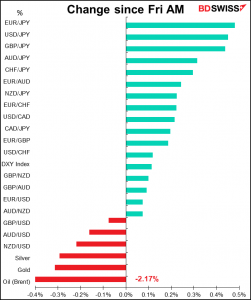