You are at:Home»MARKET PREVIEW»NZD jumps on Hawkish RBNZ, GBP Down on Disappointing PMIs; US durable goods, FOMC minutes 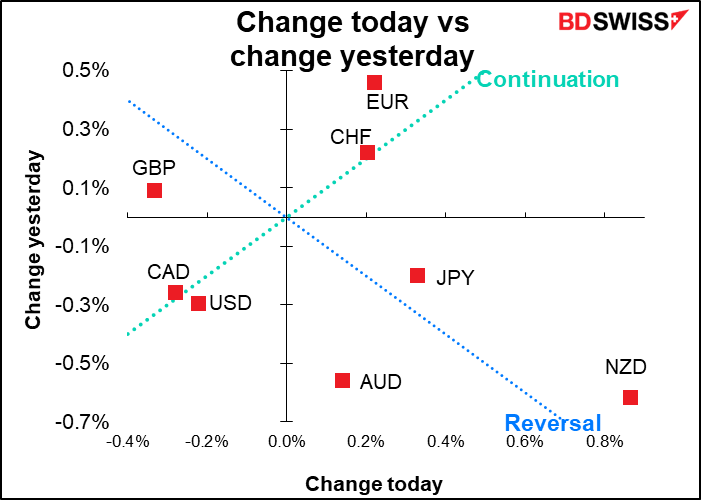 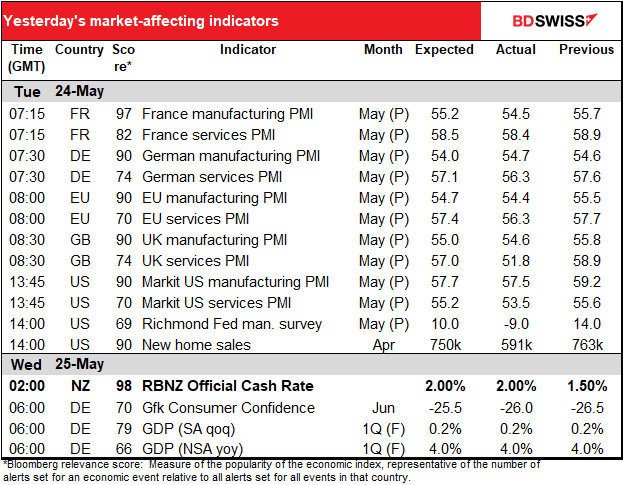 The star performer overnight was obviously NZD, which jumped based on a more aggressive-than-expected Reserve Bank of New Zealand (RBNZ). It hiked rates by 50 bps as was widely expected, but then forecast even higher rates to come. “A larger and earlier increase in the OCR reduces the risk of inflation becoming persistent, while also providing more policy flexibility ahead in light of the highly uncertain global economic environment,” the statement following the meeting said.

The forward guidance at the end of the statement was also more aggressive than before. They said

The Committee agreed to continue to lift the OCR at pace to a level that will confidently bring consumer price inflation to within the target range…Once aggregate supply and demand are more in balance, the OCR can then return to a lower, more neutral, level.

Compare this with the April statement, which just said that

The Committee will remain focused on ensuring that current high consumer price inflation does not become embedded into longer-term inflation expectations.

What level of the OCR “will confidently bring consumer price inflation to within the target range”? According to the forecasts in the accompanying Monetary Policy Statement, it’s 3.95% in Q3 2023. This compares with February’s forecast of a peak of 3.35% in 2024. On the contrary, the new forecast now shows the OCR starting to gradually decline from Q2 2024. 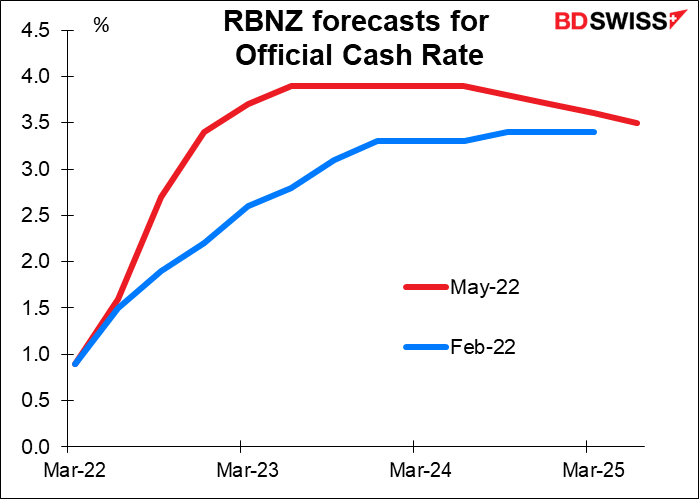 I don’t usually spend much time reviewing data that’s already come out. That’s because A) many other people do it, so I don’t think repeating what others do provides much added value, and B) you can’t make money off of what has already happened yesterday, only what will happen today.

Having said that, we’ve had several important indicators recently that are worth discussing.

Yesterday the preliminary purchasing managers indices (PMIs) for the major economies were generally expected to be lower. In the event they were even lower than expected, except for German manufacturing. This suggests a global slowdown is underway. The UK was the stand-out disaster, with the service-sector PMI collapsing (although remaining above the 50 “boom-or-bust” line so still in expansionary territory). This explains why GBP was the worst-performing major currency yesterday. 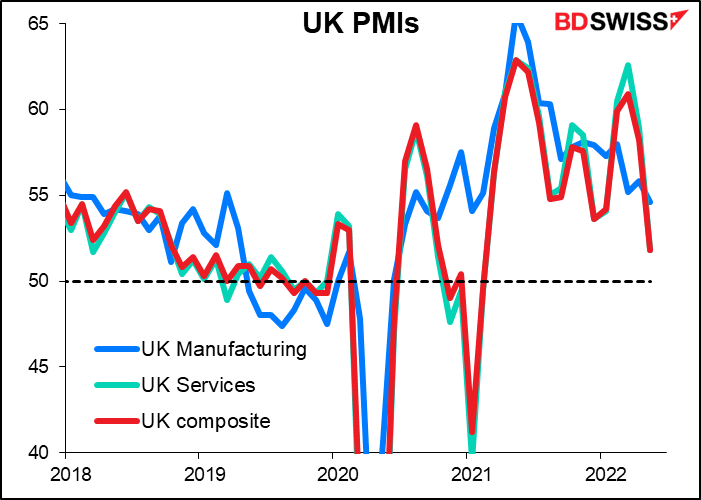 Overall, the manufacturing PMI was pretty much as expected. 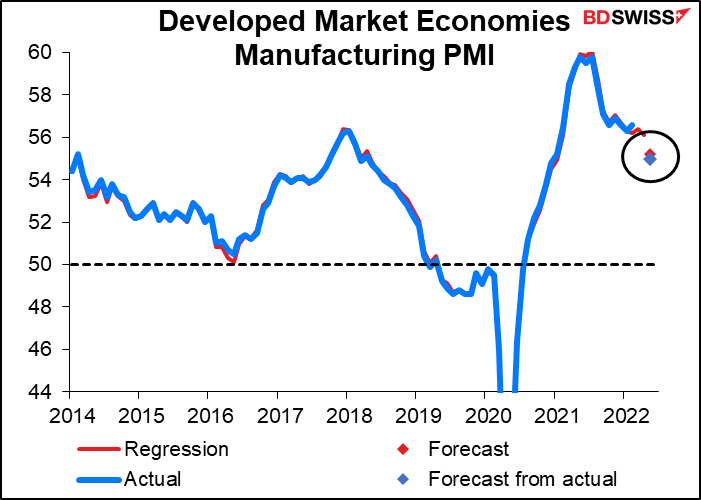 But the service-sector PMI was worse. This is surprising as so many countries have given up on COVID-19 restrictions and activity has been getting back to normal. 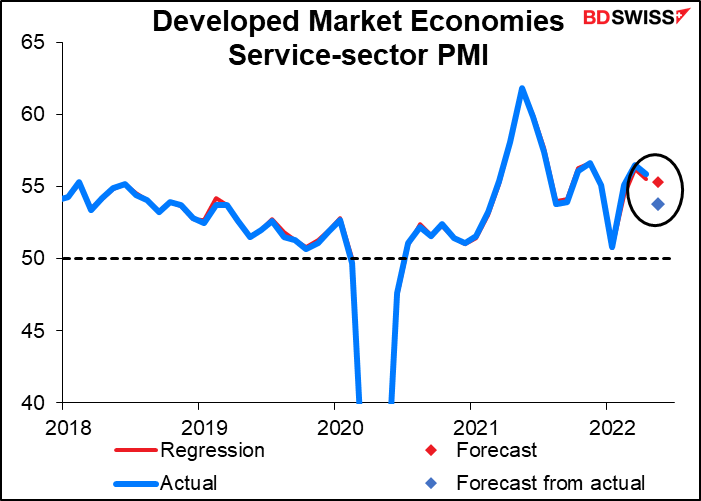 The US news also has not been that great recently. In addition to yesterday’s weaker-than-expected US PMIs, the Richmond Fed survey also surprised massively on the downside. This continues the pattern with the other two Fed surveys released so far. The Richmond Fed survey is particularly important because that has the best correlation with the Institute of Supply Management (ISM) manufacturing index, a key gauge of US economic health.

Also yesterday, new home sales surprised – shocked! — on the downside, plunging 16.6% mom (vs -2.0% as expected) even though the previous month was revised down by 7.1%. Using the initial figure for the previous month, new home sales would’ve been down 22.5% mom. This was much worse than last week’s existing home sales figure, which was down 2.4% mom (vs -2.0% expected). The rise in mortgage rates – up about 200 bps so far this year — is clearly having an impact on the housing market. The market is doing much of the Fed’s work for it. 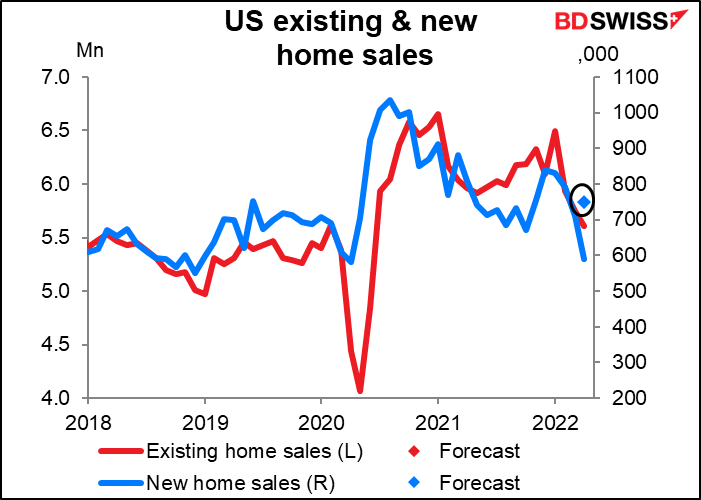 You can see how the dollar took a lurch down vs JPY and EUR after the PMIs were released. The new home sales and Richmond Fed indices came out 15 minutes later. The dollar has since recovered somewhat. (I must say though I got kind of a shock yesterday when I paid the rent for my daughter in Kyoto!)

The weaker-than-expected data pushed inflation expectations lower around the world, except in New Zealand.

That’s probably because the RBNZ raised its forecast for inflation for the next year, although one might think that the more aggressive tightening program would lower expectations for long-term inflation. 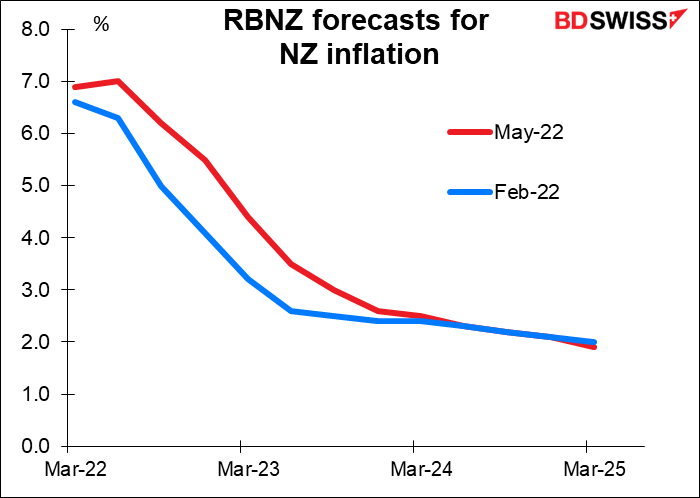 With inflation expectations coming down, bond yields came down as well, except again in New Zealand. Stock prices on the other hand were hard hit by the weaker data.

On other subjects, the US Treasury Department’s temporary waiver that allowed Russia to make sovereign debt payments to US creditors expires today. US investors will no longer be able to receive such payments. This could push Russia closer to default on its sovereign debt. The country has almost $2bn of payments due this year on its $40bn of international bonds. While the license only applies to US persons, it will be difficult for Russia to make payments to anyone via the US financial system. A default would mean that even after sanctions are lifted, it couldn’t regain access to markets until creditors are fully repaid and any legal cases are settled. Furthermore, creditors might go after the country’s physical assets. And some countries and companies have rules that bar them from doing business with an entity in default. 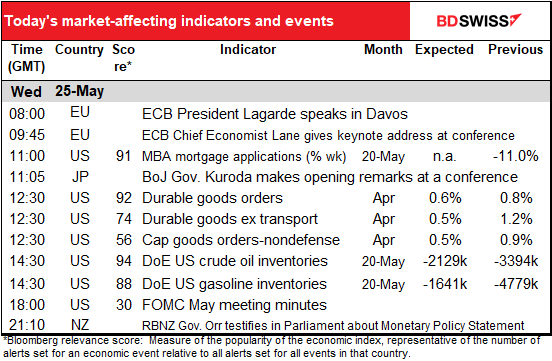 The day starts out with lots of speeches! First from the luxury Swiss resort of Davos, where European Central Bank (ECB) President Lagarde will participate in the “stakeholder dialogue” on European Unity in a Disordered World? According to the blurb in the schedule, the topic is:

The European Union surprised the world with the speed, scale and unity of its response to Russia’s invasion of Ukraine. Coming after a unified approach to the pandemic, is adversity forcing the EU to adopt a more assertive role as a global economic and geopolitical actor?

The discussion will also include the heads of government of Slovakia, Ireland, and the Netherlands, plus the President of the European Parliament, so quite a distinguished crowd. It will be livestreamed if you’re interested in watching (sorry, I don’t have a link).

Separately, ECB Chief Economist Philip Lane will be talking about “From Covid-19 to the War in Ukraine: European macroeconomic policies in times of disruption” at an event in Spain.

Then Bank of Japan Gov. Kuroda will give the opening address at a Bank of Japan/Institute for Monetary and Economic Studies Conference on “New Dimensions and Frontiers in Central Banking”. The conference will hear papers on climate change and digital currency. Gov. Kuroda’s remarks are likely to deal with research in those areas, not monetary policy. Japan is moving slowly but surely toward developing a central bank digital currency (CBDC). As the BoJ recently completed the first stage of its study and started on the second stage, it might be worth listening to what he has to say on the subject if you’re interested in CBDCs.

So that’s it for the jaw-jaw. Now we get to the data, which is pretty limited today.

The US Mortgage Bankers Association (MBA) mortgage applications started out the year strong but have been slowing recently, another sign of a flagging US housing market. 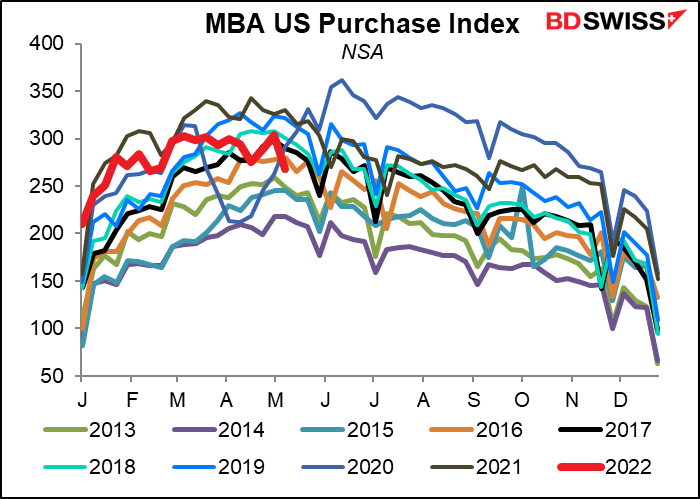 US durable goods orders are expected to be only about half the six-month average of 1.2% mom. Is this a sign of slowing economic activity? 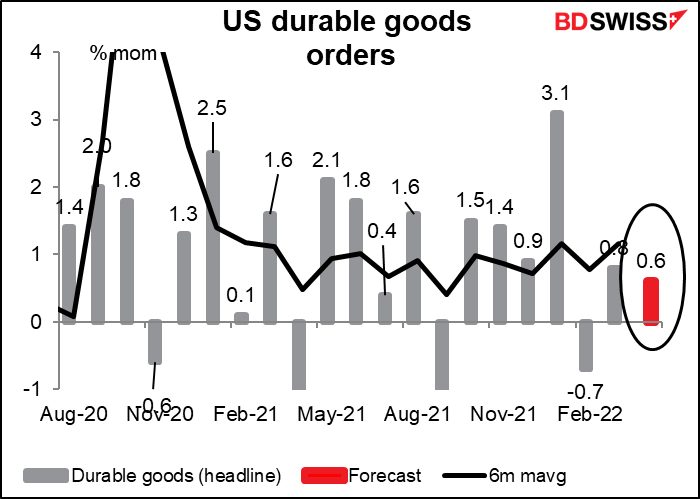 Still, the forecast amount would be 16.5% above the pre-pandemic level so it’s pretty healthy. But people don’t care about that, they care about the trend. If the trend is down it will just confirm for many people the idea that the US economy is slowing. 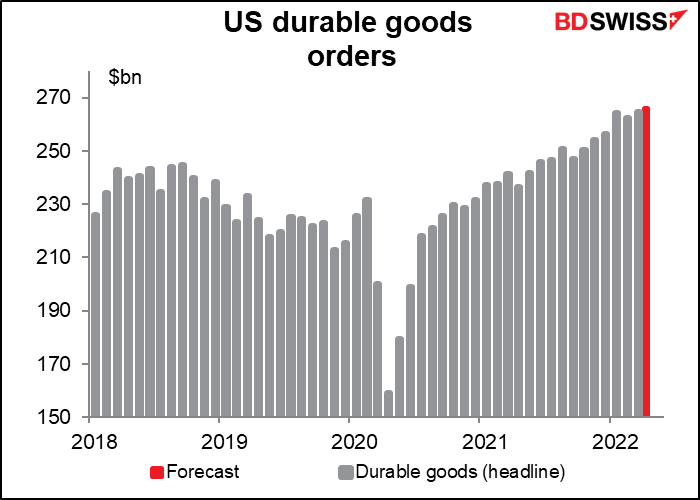 Although this is a key indicator for financial markets, the FX market doesn’t seem to react that strongly to it. 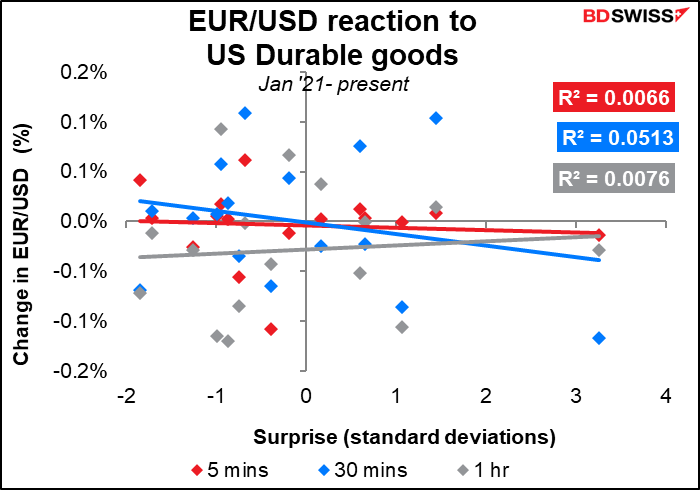 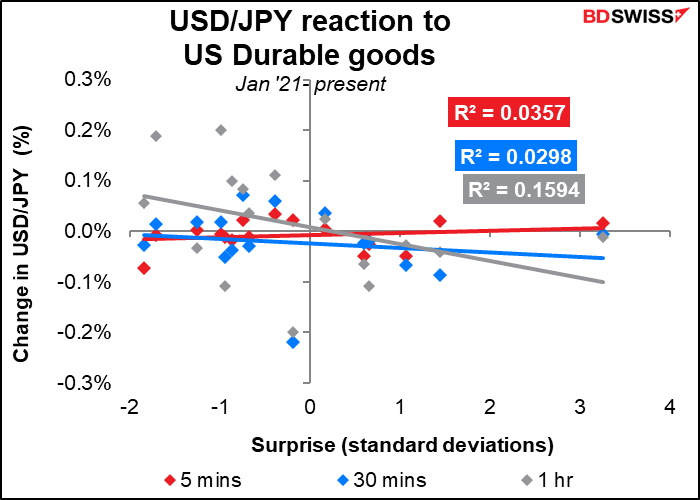 Finally, we have the minutes of the May 4th meeting of the rate-setting Federal Open Market Committee (FOMC). I’m not sure how much more we can glean from the minutes. Since the meeting we’ve heard from any number of Committee members, including the illustrious J. Powell Esq. himself. Most of them expressed their support for hiking by 50 bps at each of the next two meetings (June 15th and July 27th). Maybe the minutes will give us a hint about what they expect beyond those two meetings. Will they revert to 25 bps in September or keep plowing ahead with 50 bps? Or maybe even accelerate to 75 bps at a time? What would get them to switch one way or the other? It probably depends on how they’re viewing inflation (peaking, peaked, or recalcitrant & obstreperous) and how tight the labor market is (hot, hotter, hottest). I expect the minutes to show a Committee determined to extirpate inflation. That might be good for the dollar but negative for stocks. 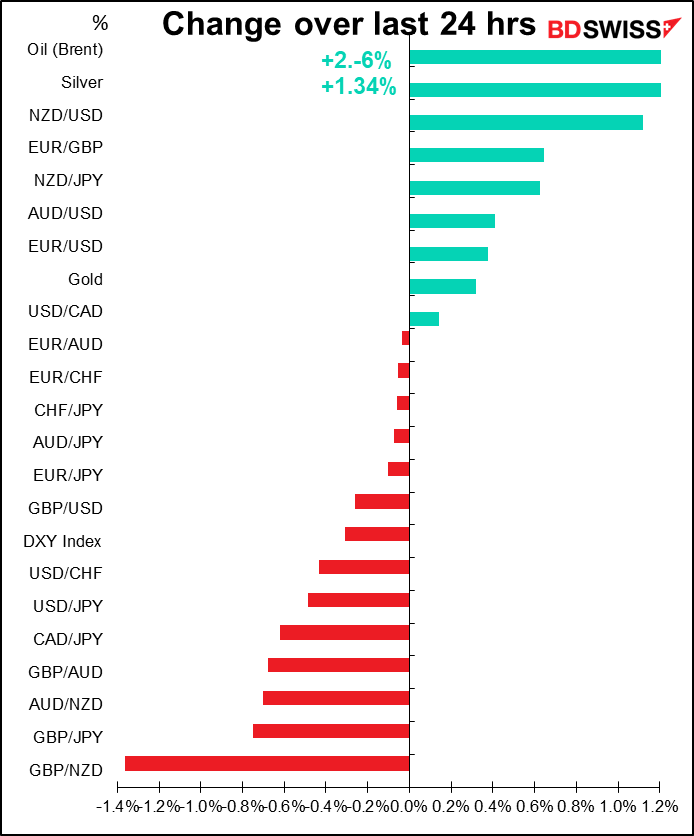