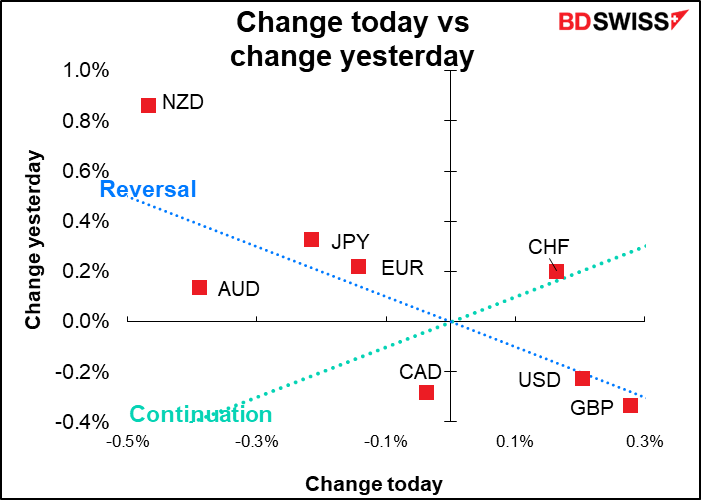 From “transitory” to “expeditiously”  In the minutes of the May meeting of the Federal Open Market Committee (FOMC), the rate-setting body of the US central banks, the new buzzword is “expeditiously.” So we got comments like “participants agreed that the Committee should expeditiously move the stance of monetary policy toward a neutral posture, through both increases in the target range for the federal funds rate and reductions in the size of the Federal Reserve’s balance sheet” and “Many participants judged that expediting the removal of policy accommodation would leave the Committee well positioned later this year to assess the effects of policy firming and the extent to which economic developments warranted policy adjustments.” Concretely, what does this mean? Answer: “Most participants judged that 50 basis point increases in the target range would likely be appropriate at the next couple of meetings.” This is what they mean by “expeditiously” – 50 bps hikes rather than 25 bps. And while they want to move policy “toward a neutral posture,” participants also noted that a “restrictive stance of policy may well become appropriate” depending on the outlook for the economy.

In short, the minutes confirmed that we’re likely to see 50 bps hikes at the June and July meetings, after which they’ll pause to reassess the situation and decide what to do next at the September meeting. This was the prevailing narrative before the minutes came out and so didn’t really change the picture any.

The minutes noted that the hawkish shift in Fed communications has had a noticeable effect on financial conditions. The Fed staff pointed out that “financial conditions, as measured by many financial conditions indexes, had tightened by historically large amounts since the beginning of the year.” This is absolutely true, as we can see by looking at both the Chicago Fed’s index of US financial conditions and Bloomberg’s. The market is doing a considerable amount of the Fed’s work for them. EG look at the recent signs of a slowing housing market as mortgage rates have risen by 200 bps this year alone! The more the market reacts, the less the Fed will have to tighten and the greater the chances of a “soft landing.” 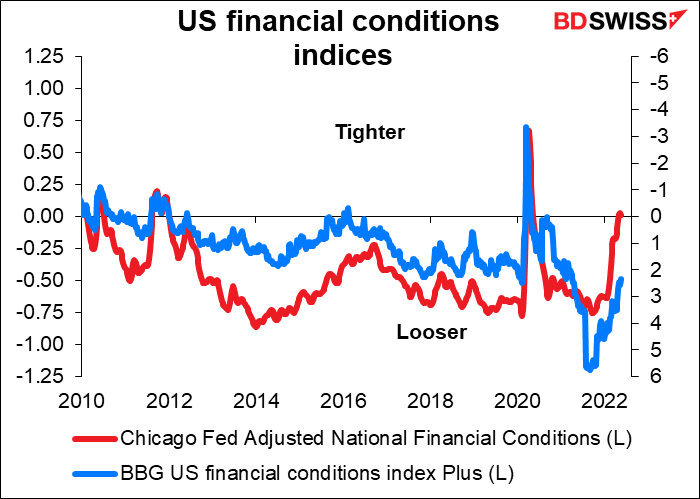 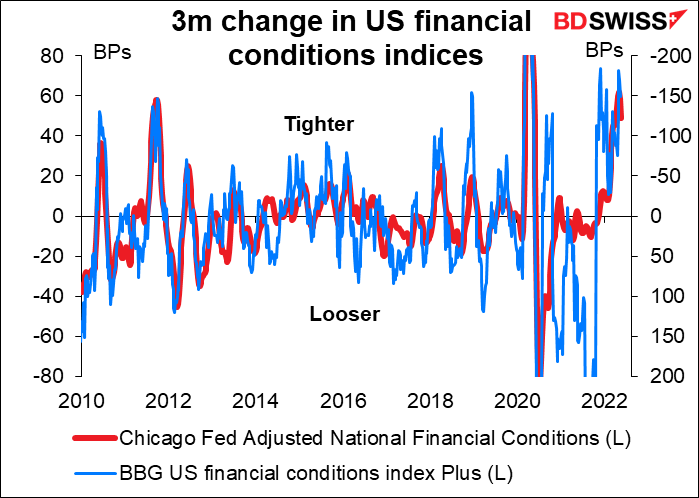 The minutes were not as hawkish as some investors had expected. Meanwhile, with concerns growing about a possible recession in the US, investors continued to reduce their expectations for more aggressive Fed tightening. The December fed funds futures are now pricing in a rate of 2.51% at the meeting, down a full 25 bps rate hike from from its peak of 2.78% on May 3. 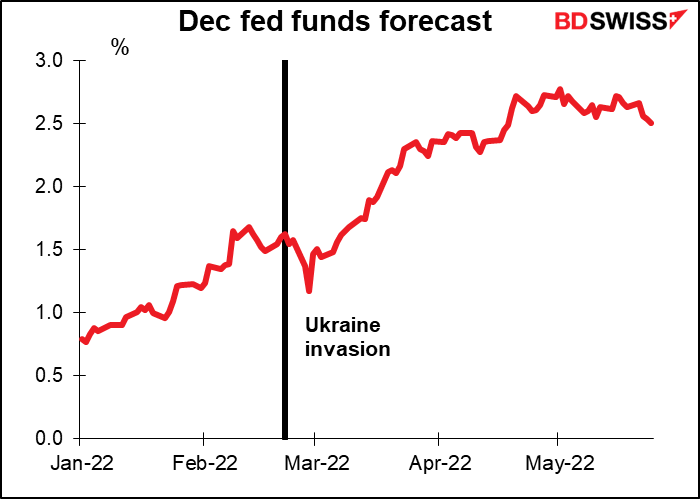 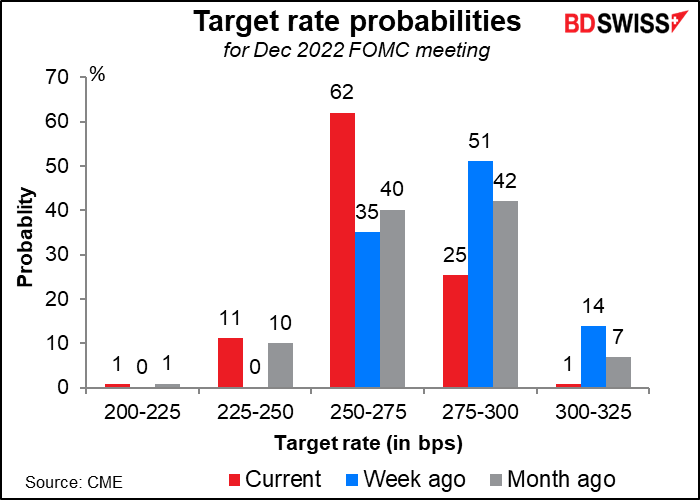 In that respect, the stronger USD was somewhat surprising, especially given the “risk-on” mood in stock markets yesterday.

Meanwhile, the big move in the FX market was the reversal of virtually all the move in NZD following yesterday’s Reserve Bank of New Zealand meeting. Most of this loss was against a stronger USD however as AUD/NZD remained at the lower level established after the meeting.

The losses in NZD – almost but not quite equaled by losses in AUD – may be due to China Premier Li Keqiang’s bleak assessment of the Chinese economy. Li said that “economic indicators in China have fallen significantly, and difficulties in some aspects and to a certain extent are greater than when the epidemic hit us severely in 2020.” He said the economy could struggle to post positive growth during the current quarter, in contrast to their goal of 5.5% GDP growth for the year.

At the other end of the scale, there doesn’t seem to be any particular reason why GBP should be the best-performing currency. It got hammered on Tuesday when the preliminary purchasing managers’ indices (PMIs) came out and were a disaster for the UK (service-sector PMI 51.8 vs 57.0 expected, 58.9 previous). It appears that the currency has just been gradually recovering since the knee-jerk reaction to that indicator.

This despite the fact that the market has reduced its estimates for Bank of England tightening from Monday, the day before the PMIs came out. 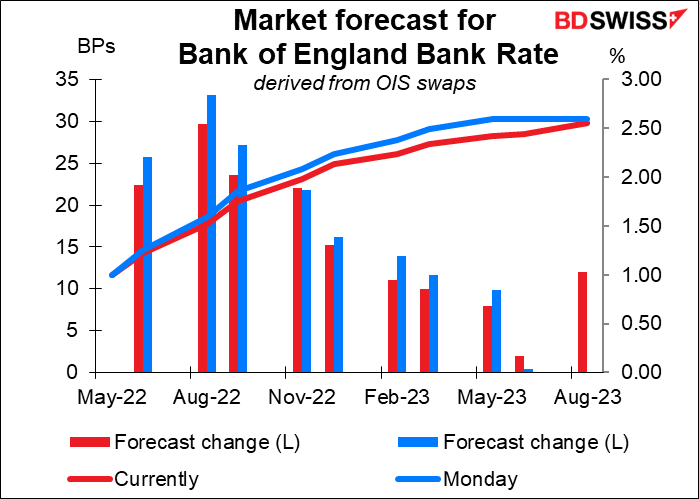 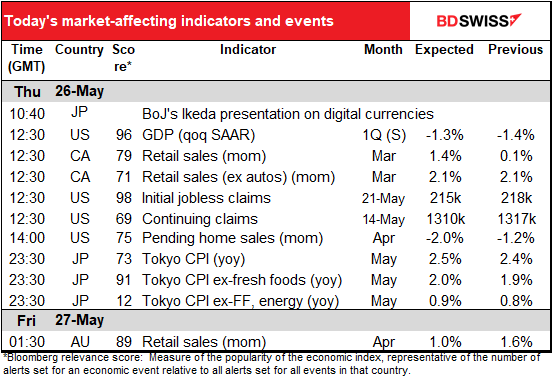 It’s not in the calendar of events because I don’t know what it’s called and what time it is, but in any event, UK Chancellor of the Exchequer Rish Sunak is scheduled to announce an emergency multibillion-pound package of support for British households facing spiraling domestic energy bills, partly funded by a windfall tax on energy companies. Apparently he will increase the GBP 200 per person savings unveiled earlier in the year and scrap plans to make people pay back the amount. To fund the move, he’ll impose a windfall tax on oil and gas companies. The amount they pay will be linked to how much they invest (the more they invest, the less they pay) so that the tax doesn’t discourage investment.

I’m sure it’s just a coincidence that this announcement comes a day after the long-awaited publication of an investigation into partying at 10 Downing Street during the lockdown, when such gatherings were utterly, totally, completely, and entirely forbidden. PM Boorish Johnson denied that any such events took place, but apparently he was being somewhat “economical with the truth,” as the British saying goes. FYI the Cabinet Office’s Ministerial Code says that “It is of paramount importance that Ministers give accurate and truthful information to Parliament, correcting any inadvertent error at the earliest opportunity. Ministers who knowingly mislead Parliament will be expected to offer their resignation to the Prime Minister.” But what happens when the “minister who knowingly misleads Parliament” is the PM?

The second estimate of US Q1 GDP is expected to be revised up a bit, but not significantly. (Technically, this is called the “preliminary” Q1 GDP, as opposed to the first estimate, which is the “advance” estimate.) .

As the graph shows, the revision between the first and second estimates for Q1 haven’t been very big for the last several years. Last year in fact it wasn’t revised at all. So it’s entirely possible that it’s just revised ±0.1 percentage point, which would probably have no effect on the markets. 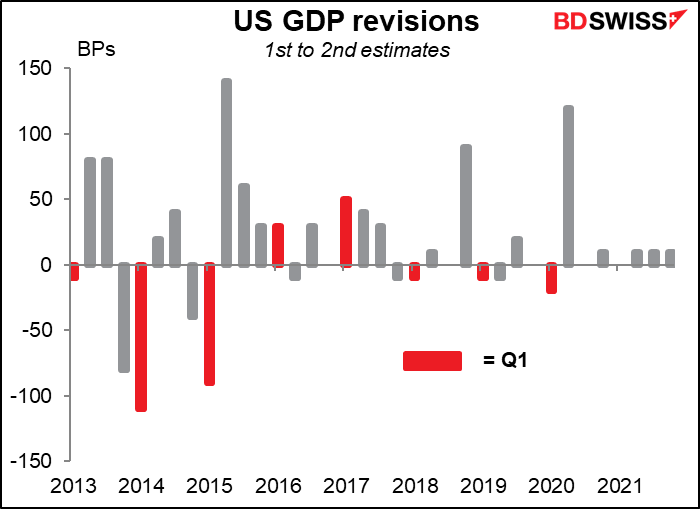 Canadian retail sales are expected to rise. Much of that may just be higher prices for gasoline, food, and other “non-discretionary” categories, but spending on other items appears to be strong too – the number of transactions has increased, especially discretionary travel and hospitality spending as people tire of the lockdown life and want to get up and boogie. The forecast rise would be an acceleration in spending from the trend, which is +0.6% mom. This sign of healthy domestic demand is likely to be taken as positive for CAD. 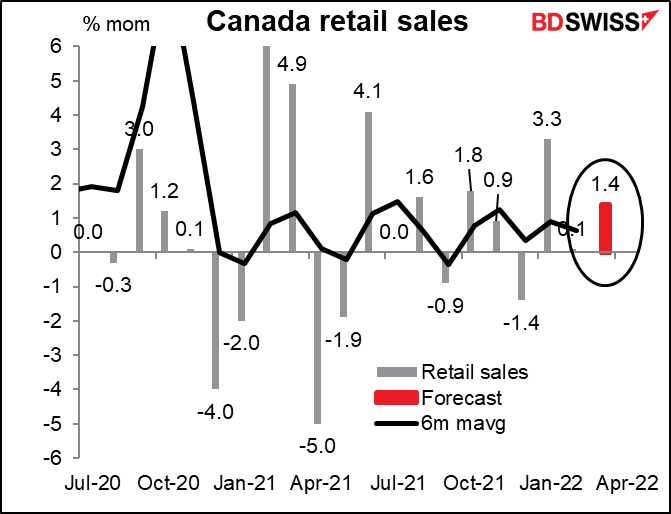 Canadian retail sales have held up fairly well – on par with Australia and above the EU and UK. 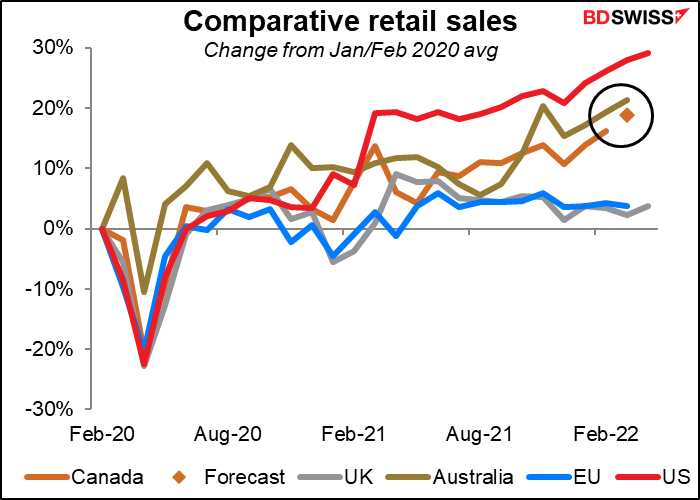 I’ve been dismissive of the US initial jobless claims, since they’ve been at historically low levels for some time and everyone already knows that the labor market is red-hot. I thought that this indicator was losing its relevance.

Alas, I probably spoke too soon. While the numbers remain historically low, the trend appears to be upward (although the forecast for this week is a bit lower – oddly enough, the same -3k that economists forecast for last week, too.) 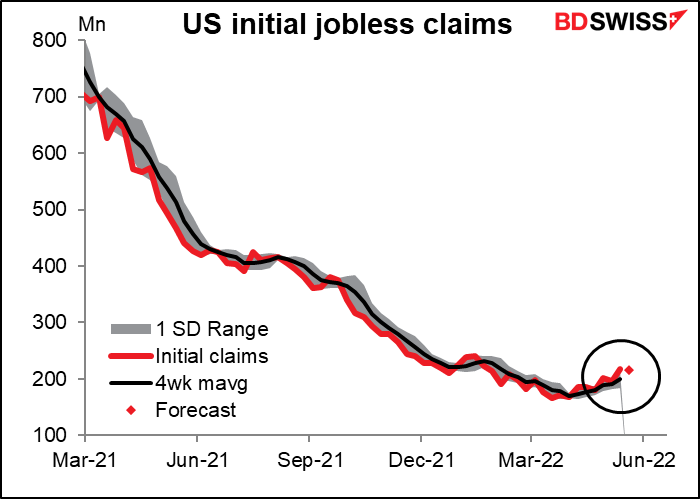 The upward trend in jobless claims may be the first indication of an uptrend in the US unemployment rate. 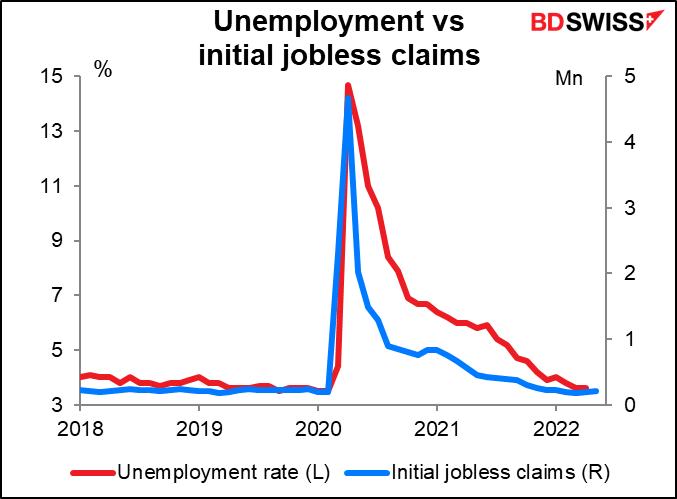 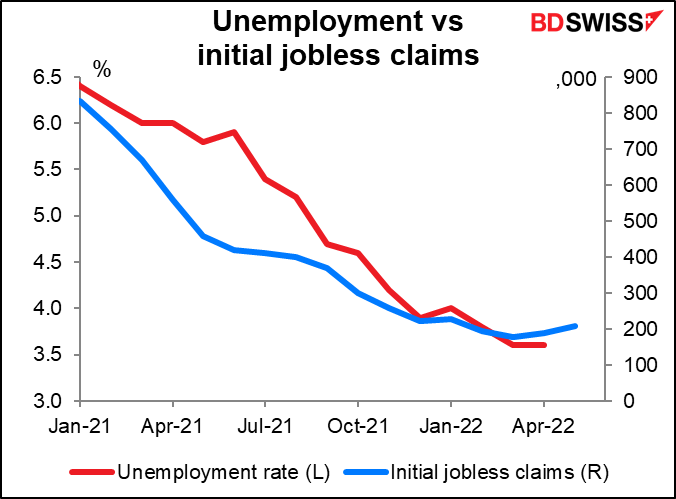 I haven’t paid much attention to the US pending home sales, either, as the housing market has been quite strong and there’s so much housing data I just got tired of writing about all of them. But six consecutive months of decline…This ties in with the sluggish home sales figures that we’ve been seeing recently. While the forecast is for less of a decline than we’ve been seeing recently, I think the fact of a decline is more important. This will tie in with the other evidence of a slowing housing market, which suggests that the market is doing much of the Fed’s job for it – the rise in bond yields has started to slow the economy. As such it may indicate that the Fed might not have to tighten as far as the market thinks. That could be negative for the dollar. 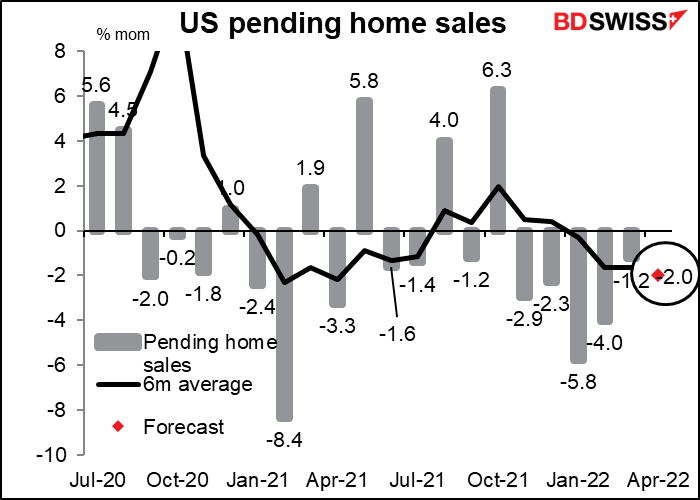 Overnight we get he Tokyo CPI. This will be really exciting! Well, for some of us who lead lives of quiet desperation, it will be. The Tokyo CPI hit 2.4% yoy in April while the national CPI was up 2.5% yoy. People expect the Tokyo CPI to move a bit higher in May, with the Japan-style core inflation (excluding fresh foods) finally hitting the BoJ’s target of 2.0%. As I described in depth and detail in my Weekly Outlook, this is not likely to trigger any change in policy from the BoJ, since core inflation (excluding energy & fresh food, or “core-core” inflation as it’s known in Japan) remains absurdly low, below 1%. However it could trigger a knee-jerk reaction from the market, which is accustomed to buying currencies with higher inflation rates in anticipation of higher interest rates. I think it’s likely to be JPY-positive although I would sell into a stronger JPY. 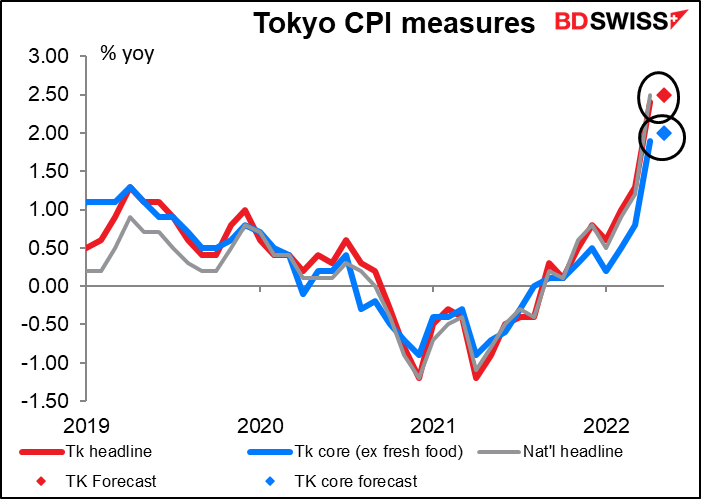 Australia also has its retail sales today. The Bloomberg relevance score suggests they’re much more important for Australia than for Canada (89 vs 79). With unemployment at a record low and the participation rate at a record high, Australian consumers are in good shape. As a result, the country’s retail sales have been pretty strong for the last few months and seem to have maintained their momentum in April, although there is some uncertainty because of the bad weather (severe flooding here and there) and the Easter holidays as well as the post–COVID reopening. Another strong gain could reinforce the idea that the economy is booming and the Reserve Bank of Australia will need to tighten further to get inflation expectations under control. AUD+ 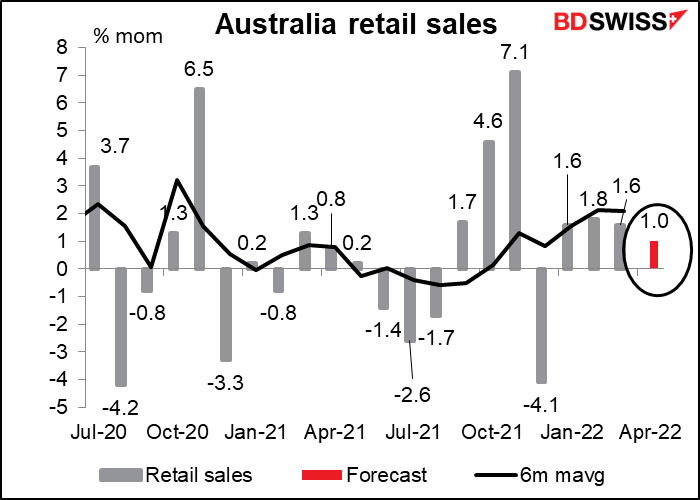 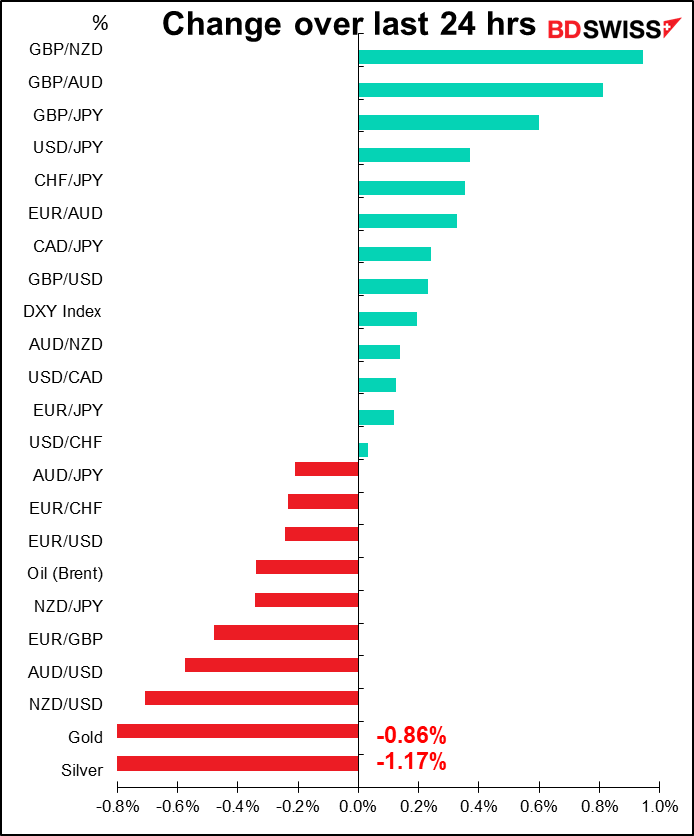