You are at:Home»MARKET PREVIEW»EUR, CHF Up on Monetary policy outlook; Preliminary PMIs, RBNZ 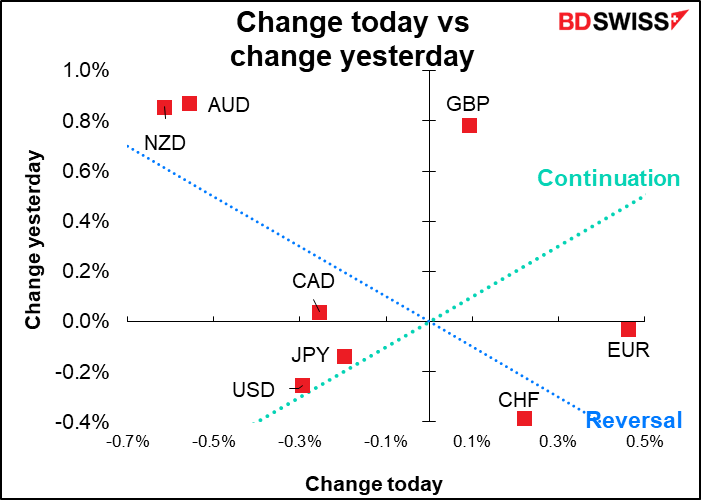 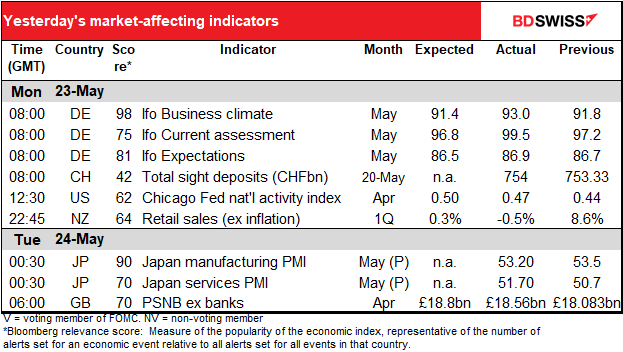 EUR was the leader after European Central Bank (ECB) President Lagarde gave the most specific “guidance” yet about the Governing Council’s intentions. In a blog post, she said…

I expect net purchases under the APP to end very early in the third quarter. This would allow us a rate lift-off at our meeting in July, in line with our forward guidance. Based on the current outlook, we are likely to be in a position to exit negative interest rates by the end of the third quarter.

She said that after that, it depends on how inflation develops. If it seems to be stabilizing at their 2% target, “a progressive further normalisation of interest rates towards the neutral rate will be appropriate.” But if the Eurozone economy seems to be overheating (and inflation still above target), then “iit would make sense for policy rates to be raised sequentially above the neutral rate.” But the situation is complicated because factors like high energy prices are dampening demand so that inflation and growth are moving in opposite directions – a rare event that creates a lot of uncertainty.

The market is now forecasting a  positive deposit rate (+0.07%) by September, in line with Lagarde’s expectations. 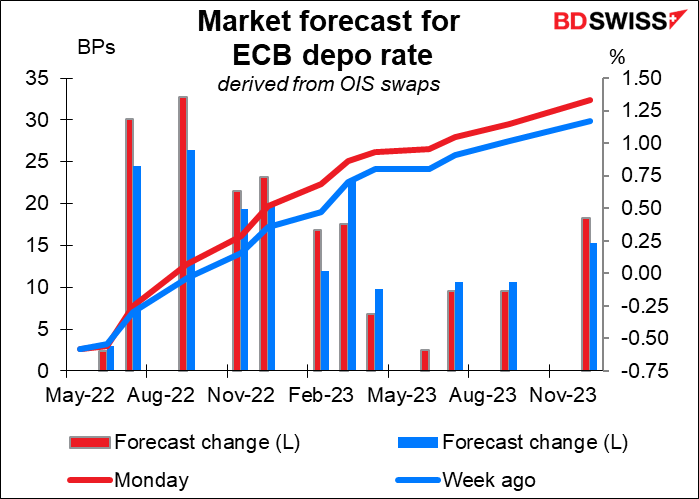 Lagrde might even be conservative at this. Bloomberg reported that her remarks have “irked colleagues who want to keep open the option of moving faster,” in that her plan effectively excludes the possibility of a half-point move. As the chart shows, the market is forecasting the possibility of a rate hike of more than 25 bps at eithr the July or September meetings. Although the Bloomberg article said her comments irked “colleagues,” plural, so far only one colleague –Dutch central bank Gov. Knot — has openly referred to the possibility of a 50 bps hike.

It seems to me that most forseeable Fed tightening is pretty much priced in right now, while ECB expectationsi still have room to move higher. This difference in expectations could propel EUR/USD higher still over the next several sessions as the market has only recently begun to reprice this differential. 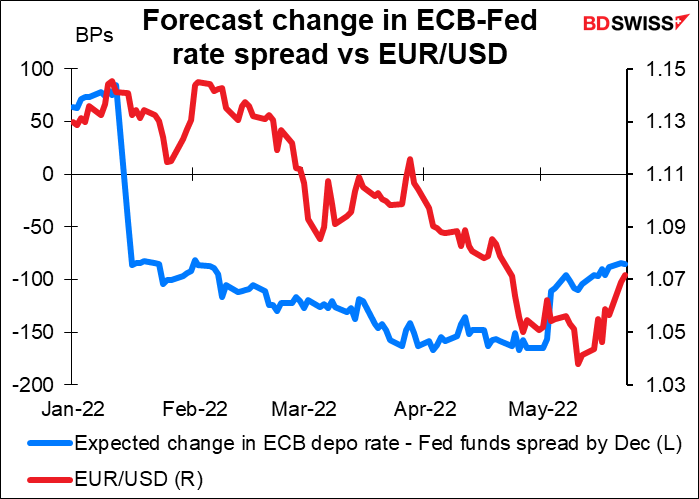 Ultimately I think the market may be underestimating the Fed’s willingness to hike rates, but that satori – enlightenment – will take some time to occur.

CHF was #2 as another member of the Swiss National Bank (SNB) Governing Board echoed SNB President Jordan’s warning last week that the SNB was willing to take action against above-target inflation. SNB Board member Andréa Maechler said the central bank “will not hesitate to tighten our monetary policy” if inflation does not settle below 2% over the medium term. The SNB’s reaction will depend on both the dynamics of inflation and the economic outlook in Switzerland and abroad. If inflationary pressures take a different turn than expected, “we are ready to use the instruments at our disposal to curb inflationary pressure that has become too strong.” She noted that “as soon as we are able to lift the negative interest rate, we will,” however, “we do not yet know when we will be able to do so.”

Significantly, her analysis of the causes of inflation were different than what you see elsewhere. She even used the now-banned term “transitory”! “Currently, the pressures come largely from two factors which we still consider transitory: the rise in commodity prices, energy and certain foodstuffs, as well as delivery times linked to global bottlenecks in production and transport,” Maechler said. The SNB therefore expects the pressures to normalize in the coming quarters. (The original article is here but is mostly behind a paywall.) 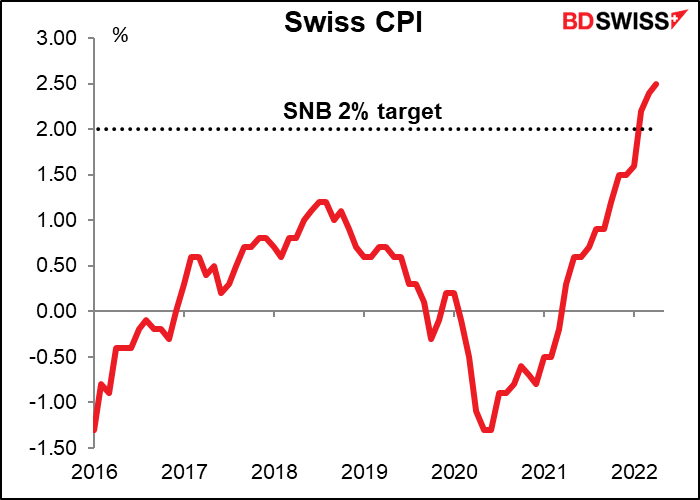 I expect that the gradual normalization of interest rates in Switzerland is likely to push the CHF up further, even though it’s already the 2nd-most overvalued currency in the G10 based on the OECD’s consumer basket valuation method of calculating purchasing power parity (PPP)… 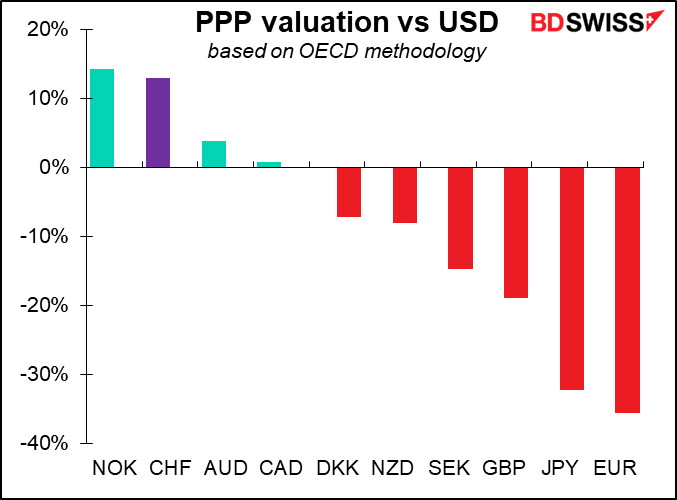 …and far and away the #1 most overvalued currency based on the easier-to-understand Big Mac index (which isn’t totally relevant to me since I’m a vegetarian, but it does accurately reflect the preternaturally high cost of restaurant food in Switzerland, where virtually no main dish is available for less than CHF 20.) 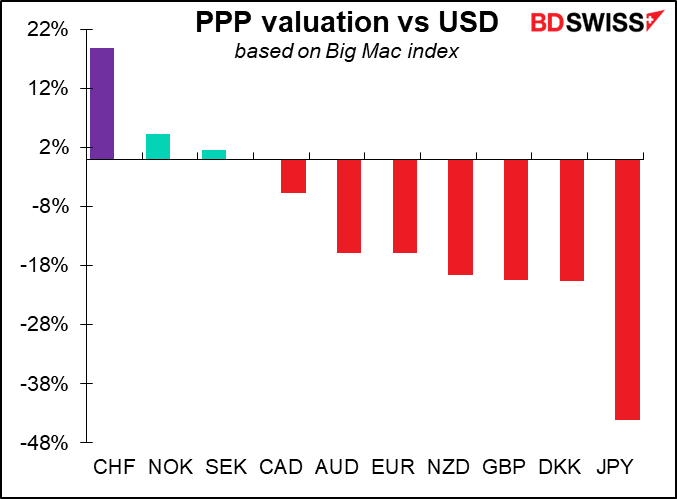 The answer is probably: Snapchat (SNAP), or Snap Inc. as it’s formally known. After the close yesterday the social media company cut its revenue and profit forecasts below the low end of its previous guidance, sending the shares plunging as much as 31% and pushing other social media — and the market as a whole — lower. The S&P 500 futures are now trading 1.4% below Monday’s market close.

I notice though that the currencies have stabilized even though the market hasn’t – perhaps investors think this was an overreaction and the currencies may recover today. 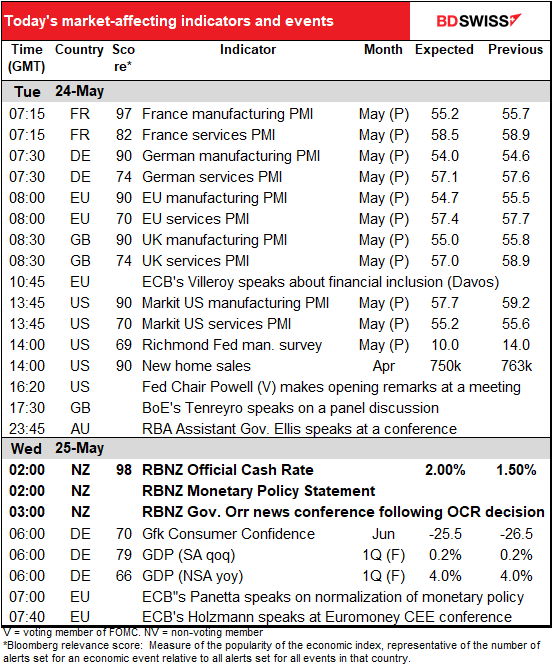 Two big things on the schedule today. First off, the Reserve Bank of New Zealand (RBNZ) will decide what to do with its official cash rate (OCR) overnight. I write about this below, where it belongs according to chronological order.

They’re expected to be uniformly lower. Not one of them is forecast to be higher. The US is expected to be especially weak in manufacturing, the UK weak in services.

The PMIs for Japan have already come out. The manufacturing PMI was down slightly but the services PMI rose a full point, contrary to what was expected for the other PMIs. Of course Japan’s service-sector PMI has been a laggard in this recovery so it doesn’t necessarily mean the others will beat estimates. 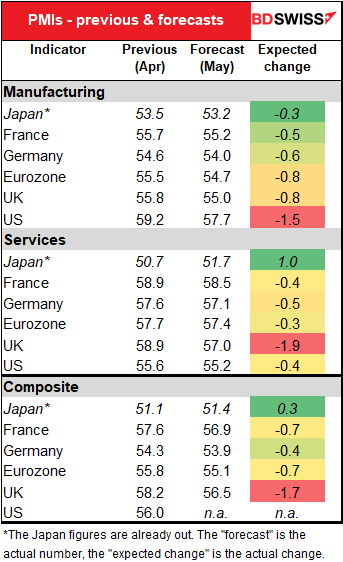 At this rate, the developed market manufacturing PMI might fall to 55.2 from 56.3 based on a regression analysis using the forecasts for the US, EU, and UK and the actual figure for Japan. 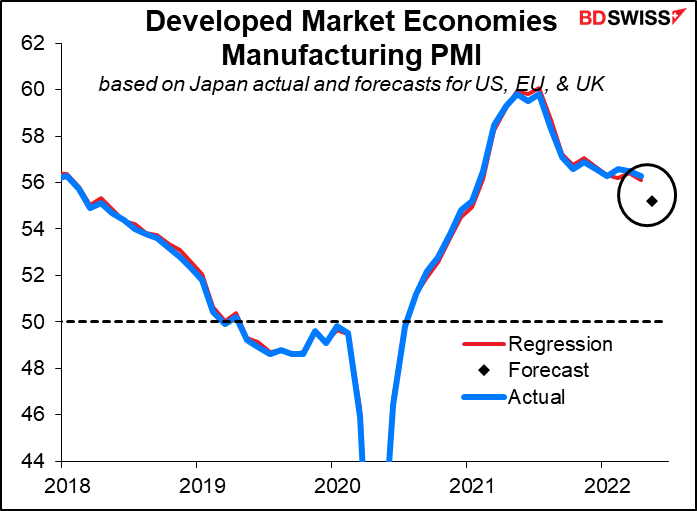 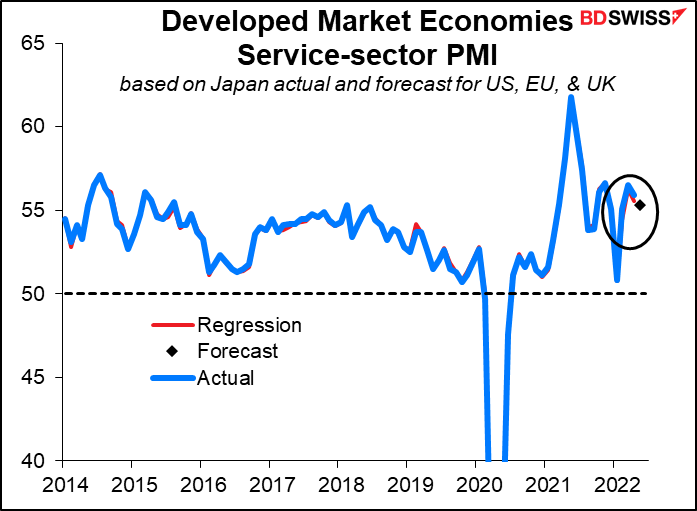 In any case, the conclusion would have to be that both manufacturing and the service sector are in pretty good shape if their PMIs are in the 55 area. That might dispell some of the gloom and doom feelings that have been depressing the commodity currencies. On the other hand, people might focus more on the direction, which is uniformly lower. That could be bad for the commodity currencies. A lot depends on how people choose to interpret the figures. Unfortunately I think they’re more likely to look at the direction, not the level, and interpret the data as confirming a global slowdown. AUD-

The Richmond Fed survey isn’t as closely watched as some of the other Fed indices, but it should be, IMHO, because my research suggests it’s the one that best predicts the Institute of Supply Management (ISM) index, which is main point of watching these things to begin with. It’s expected to be down just 4 points this month, which seems quite optimistic to me seeing as the average of the Empire State and Philly Fed indices was down a massive 25.6 points (the Empire State index fell 36.2 points and the Philly Fed index fell 15 points). In any case, a lower reading would just confirm the “economy is slowing” narrative and therefore be negative for USD, in my view. 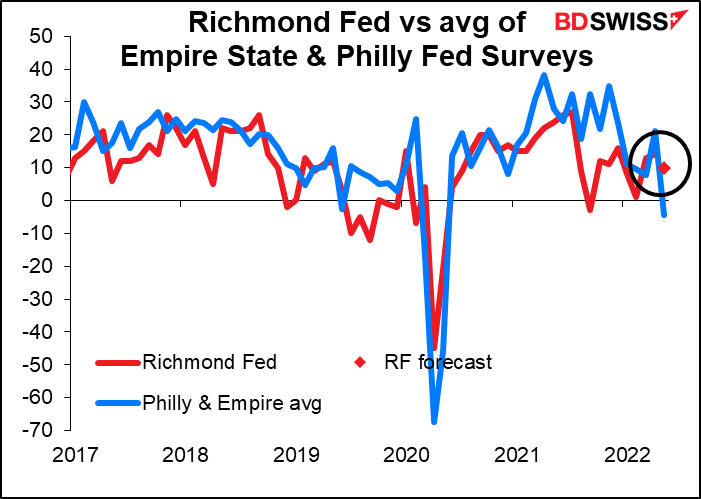 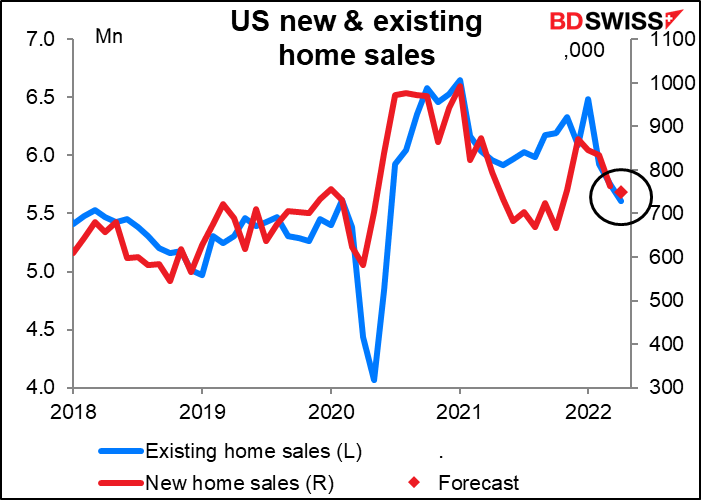 Fed Chair Jay Powell (V) is going to make welcoming remarks via pre-recorded video to the Ntaoinal Center for American Indian Enterprise Development 2022 Reservation Economic Summit. I doubt if he’ll have anything new or exciting to say in his brief comments but you never know. Although sometimes you have a pretty good idea.

Then ovenight, the RBNZ will meet to decide what to do about its official cash rate (OCR), as mentioned above. At their last meeting on April 14th they hiked by 50 bps and the market is discounting another such hike this time too, to 2.0%. Of the 18 estimates on Bloomberg, 16 are for 2.0%, two are for 1.75%. 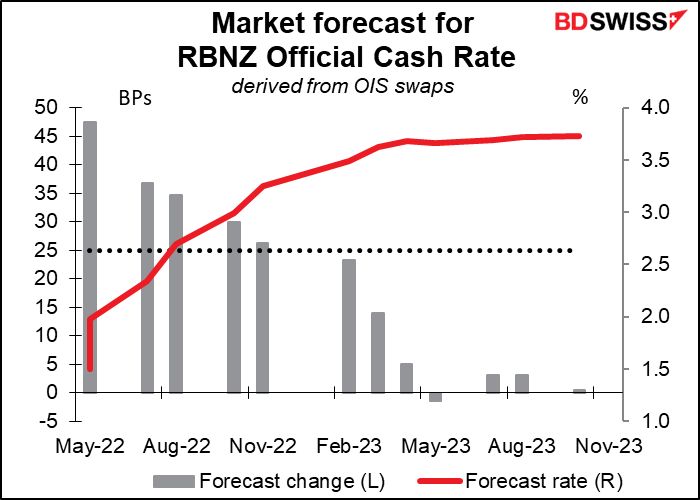 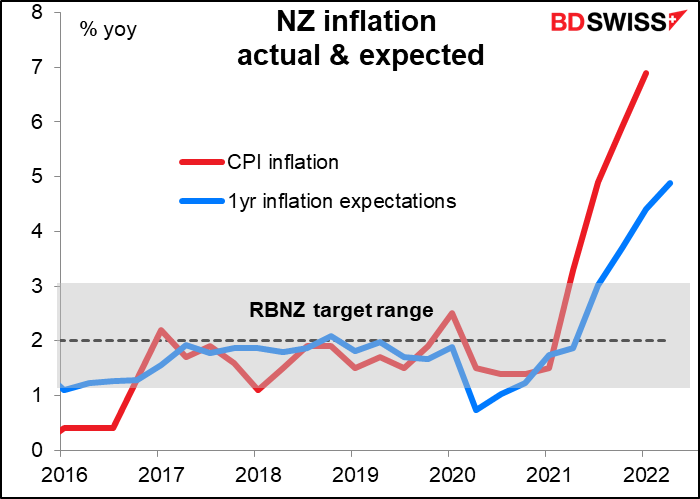 The main points of interest then will be any change in their sentiment and how high they think the rate might have to go. There will be a new Monetary Policy Statement issued with new forecasts. The February one had rates peaking at around 3.5%; is that still the case? Do they still see it peaking in Q3 2024 or will they bring that forward, seeing as how they’re “front-loading” the rate hikes? On the other hand, they might reduce the terminal rate because of the front-loading (reasoning that doing more now means having to do less later). And do they still see 2% as the “neutral” rate for the OCR? I think these will be the major questions people will be asking. 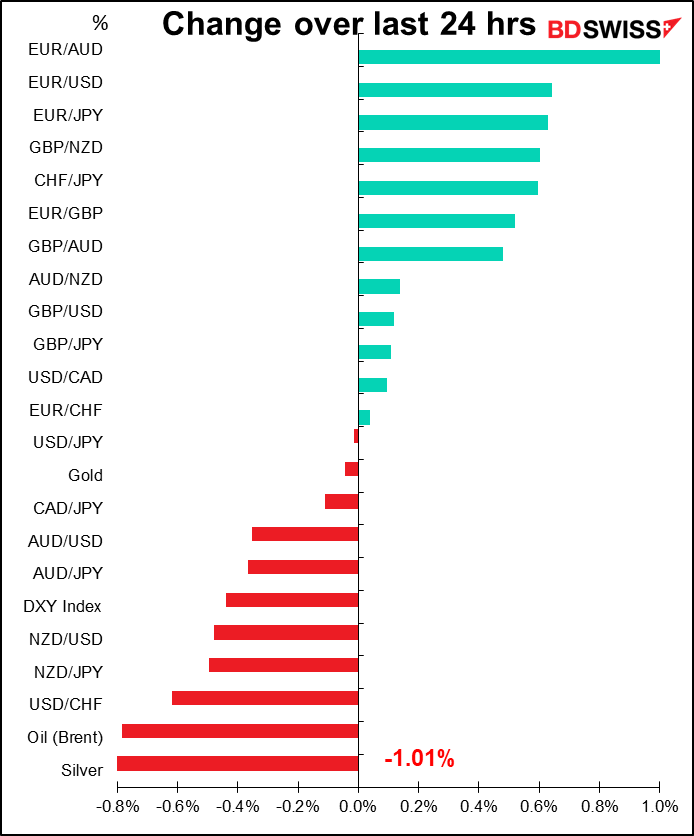