Oops! Yesterday I said that the Eurozone GDP usually “isn’t revised or if it is, it’s only by 10 bps, so it doesn’t matter” (although I did say that “with the recent gyrations in GDP there have been some larger differences”). Well, yesterday was one of those days when there was a larger difference – growth turned out to be double what they had thought initially! That set off a round of speculation that the European Central Bank (ECB) might signal a 50 bps hike was on the cards sometime in the future (see below).

I don’t think so. I still expect that ECB President Lagarde will continue to signal a “gradual” increase in rates, i.e. 25 bps, and that the market disappointment is likely to depress the euro afterward. But what do I know? She hasn’t told me what’s likely to happen. Nor have ECB Chief Economist Philip Lane and I gone out for a drink together and chatted about the markets in a long time. Ever, in fact. So this is just my view.

Elsewhere, it was noticeable that both JPY and CHF weakened despite the fall in stock markets.

For JPY the decline was probably due to Bank of Japan Gov. Kuroda’s consistent support for his ultra-loose monetary policy. Speaking at an FT “Global Boardroom” conference, Gov. Kuroda repeated that the recent rise in prices in Japan was driven by energy costs and would not be sustained. “At this moment, Bank of Japan must continue its support for economic activity by continuing with the current monetary easing,” he said. Gov. Kuroda also seemed unconcerned about the prospect of a further rise in USD/JPY (decline in JPY) as he believes the market has largely discounted Fed tightening. “Unless the Fed raises interest rates much faster than, or more than, what their forward guidance shows, the dollar rate may not be so much affected by [US-Japanese] interest rate differentials,” he opined. In any case, he reiterated that a weaker but stable JPY should be positive for the Japanese economy overall – hardly the kind of comment he would make if officials were really worried about it. Green light to buy USD/JPY (= sell JPY)!

(Please remember by the way that I have a daughter in university in Kyoto and am therefore structurally short JPY. My comments may inadvertently be biased as a result.)

The move in CHF is harder to explain. USD/CHF seemed to rise in line with the fall in stock markets, the reverse of what one might expect if CHF were trading as a “safe-haven” currency.

The House Select Committee to Investigate the January 6th Attack on the U.S. Capitol, aka the Jan. 6th Committee, will start a series of televised proceedings. The first one is tonight at 8 PM ET, which is prime time in the US. The nine-member panel (seven Democrats, two Republicans) plans to give an overview of its 11-month investigation that included interviewing more than 1,000 people. So far only snippets of that testimony have been revealed to the public, mostly through court filings. Several committee members have promised new and explosive information from the hearings,

You can watch the hearings live on the Committee’s website. C-Span will be covering the hearings and all the major networks will be using their feed and adding their own commentary. You can find other ways to view them here.

Meanwhile oil prices rose further. Although US crude oil inventories rose instead of falling as expected, gasoline inventories fell instead of rising as expected (see table above). Yesterday I highlighted the shortage of gasoline. The takeaway from this is that the oil market not only suffers from a shortage of crude oil but also a shortage of refining capacity, which is probably worse – maybe Saudi Arabia can ramp up production to make up for some of the lost Russian supply but it would take several years to build a refinery.

That should be supportive for CAD but at the same time it’s likely to make the global inflation problem worse, keeping interest rates high. It’s also bad for economic growth as it will divert spending money into energy that would otherwise have gone into buying other stuff. 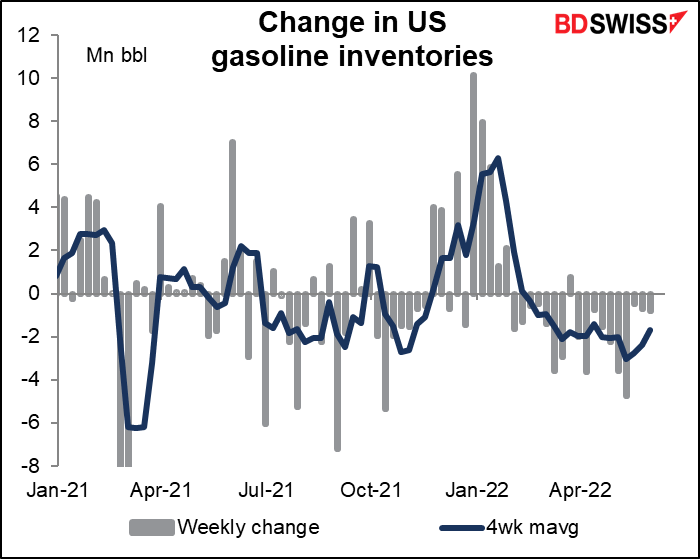 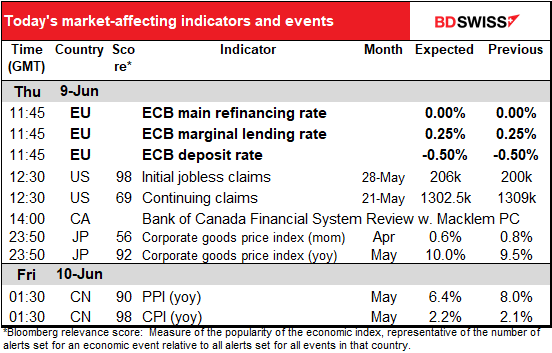 Ok boys and girls, it’s ECB (European Central Bank) day today! The Governing Council of the ECB meets to decide on monetary policy. The Governing Council consists of the six members of the Executive Board plus the governors of the national central banks of the 19 euro area countries. The Executive Board members vote at each meeting while the governors have a rotation system, kind of like at the US Fed but slightly more complicated. If you’re curious about it you can read the explanation here.

I wrote about the meeting in the usual excruciating detail in my Weekly Outlook, but since I get paid by the word I’m going to repeat much of that here.

Rarely has the result of any central bank meeting been so well telegraphed in advance. Numerous ECB officials have said that they are likely to stop their quantitative easing (QE) bond purchases at the June meeting and then start raising rates in July. So the main thing will be confirmation that net purchases under the Asset Purchase Programme (APP) will end at the end of June, allowing for “lift-off” in July. We will also be looking for the new staff forecasts. They should show inflation rising to 2% in 2024 to justify the policy change. 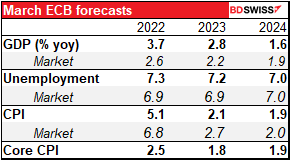 One point of contention is how quickly to raise rates after they start hiking. President Lagarde and Chief Economist Lane have been stressing that rate rises will be “gradual,” which is a code word for 25 bps. However several Governing Council members have been agitating for 50 bps hikes. The market is now forecasting that the ECB depo rate will be +0.74% by the end of the year vs -0.50% currently, i.e. 124 points higher than now. (This is up from 0.65% on Tuesday, before the revised Q1 GDP figure came out.) Since there are only four meetings after this one (July, September, October, and December) that implies a hike of more than 25 bps at one of them. 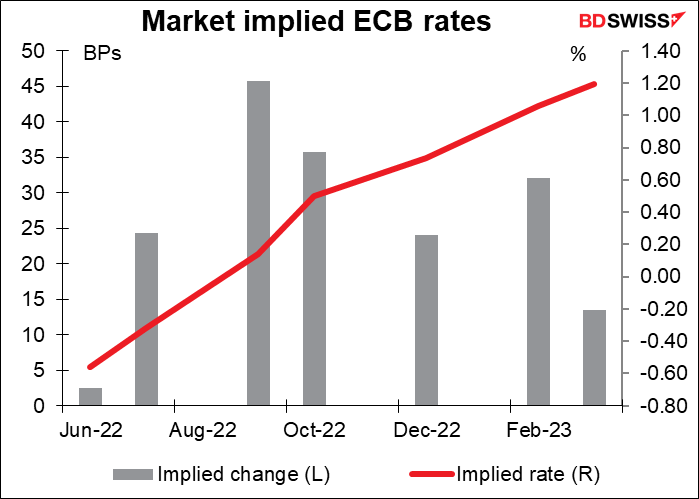 We’ll also have to see how they redefine their forward guidance. Right now it’s based on their three conditions for liftoff, but of course once these conditions have been reached and the rate-hike cycle begins, they’ll need a new set of guidelines to give people a sense of how rapidly they’re going to raise rates. These guidelines will probably follow the outline set out by President Lagarde in a recent blog post. It’s hard to sum up exactly what she’s saying there because she’s purposely vague due to the. enormous uncertainties facing Europe right now.

If we see inflation stabilising at 2% over the medium term, a progressive further normalisation of interest rates towards the neutral rate will be appropriate. But the speed of policy adjustment, and its end point, will depend on how the shocks develop and how the medium-term inflation outlook evolves as we move forward.

One thing is certain though: she’ll definitely repeat her call for “optionality, gradualism and flexibility in the conduct of monetary policy.”

Likely impact:  If President Lagarde pushes back on market pricing of more than 25 bps hike per meeting, we would probably see EUR weaken afterward. On the other hand, if she validates market pricing by holding out the possibility of a 50 bps hike (or at least a hike of more than 25 bps) then the market is likely to start discounting even more tightening and EUR would be likely to strengthen. I expect the former; I think she’ll push back against market speculation and as a result EUR may weaken afterward.

Looking at past meetings, the usual pattern seems to be EUR weakening on average in the days following the meeting, although the last six times there have been policy changes (recently these have all been tightening measures) the euro recovered a week or so later. If President Lagarde sticks to her “gradual” stance while so many other central banks seem to be opting for 50 bps hikes, I think we could see EUR weaken again after this meeting, too. 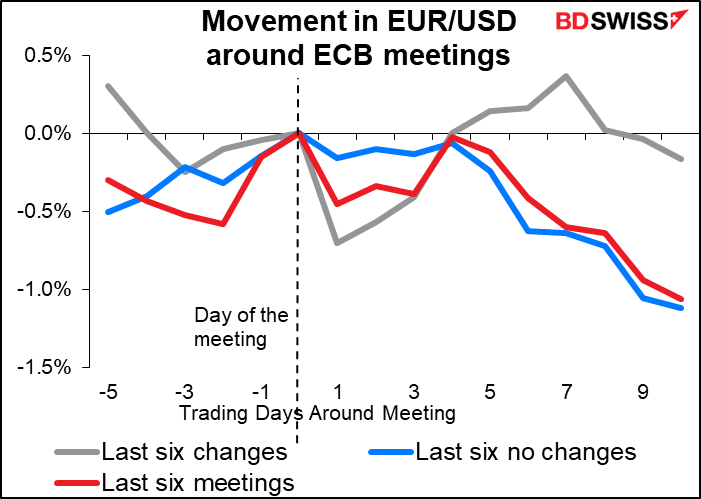 Of course these averages conceal a lot of varied movement after each meeting, so there’s no guarantee that the market will follow the average move. 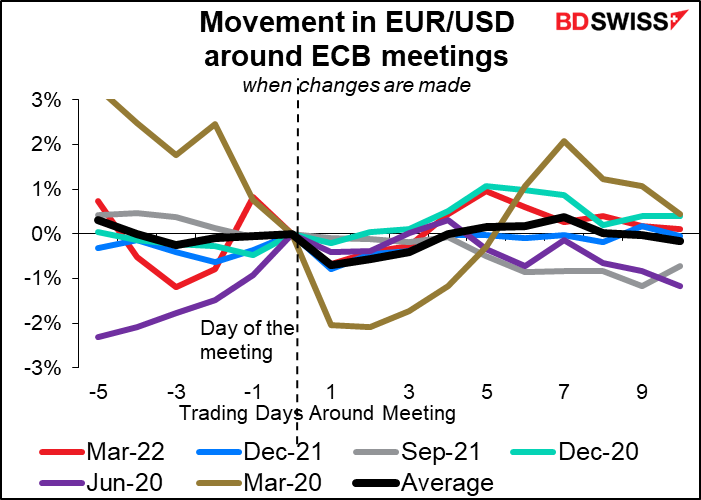 US initial jobless claims were down 11k last week, this week they’re expected to be up 7k. It seems to me that they’ve risen a bit from their March lows but are just going sideways by and large. This kind of a change would be nothing to get excited about. If you want to get excited about an indicator, there are few more thrilling ones than Japan’s corporate goods price index (CGPI), aka producer price index (PPI). The CGPI is expected to rise further, an amazing development for a country that hasn’t seen much inflation for the last 27 years or so. The main reason the CGPI is rising is because of soaring raw material prices. They were up an astonishing 77% yoy in November last year. Since then the pace of increase has moderated somewhat but is still extraordinarily high – 66% yoy in April. 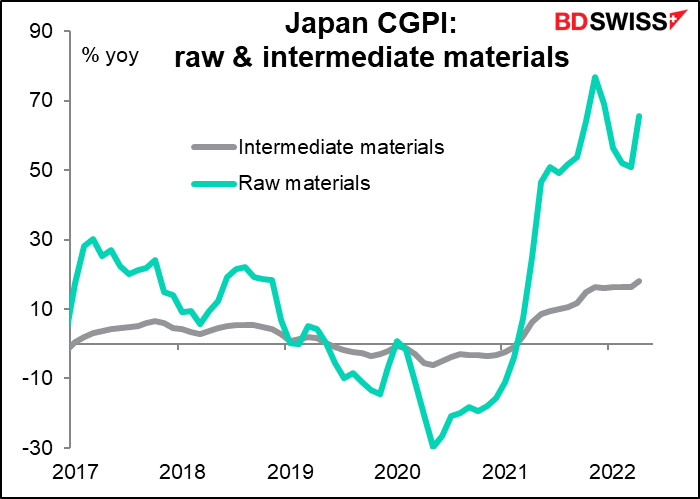 A rising PPI will put either upward pressure either on retail prices or downward pressure on corporate profit margins. The former could in theory be JPY-positive if the Bank of Japan responds by hiking rates, but from what Bank of Japan Gov. Kuroda said in his speech on Monday there’s no chance of a change in policy in response, at least not any time soon. 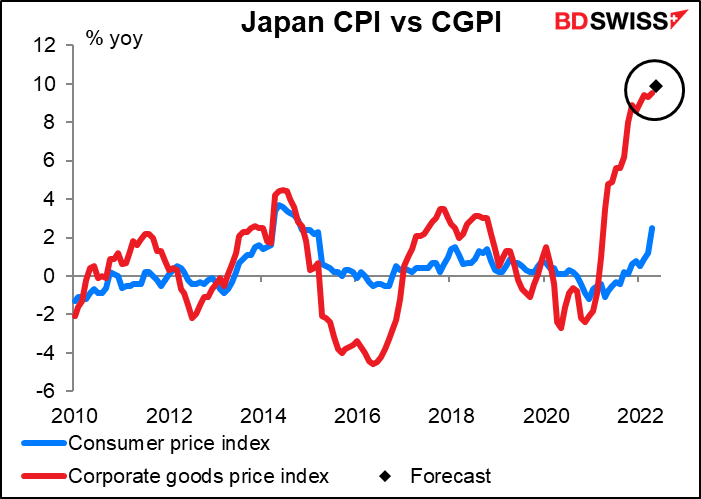 By contrast, China’s PPI is expected to slow notably. This is a good sign for inflation around the world as China’s PPI is in effect many other countries’ imported goods price index.

China’s CPI is of only local interest. It’s expected to be a bit higher, which I would expect is probably due to higher food prices. 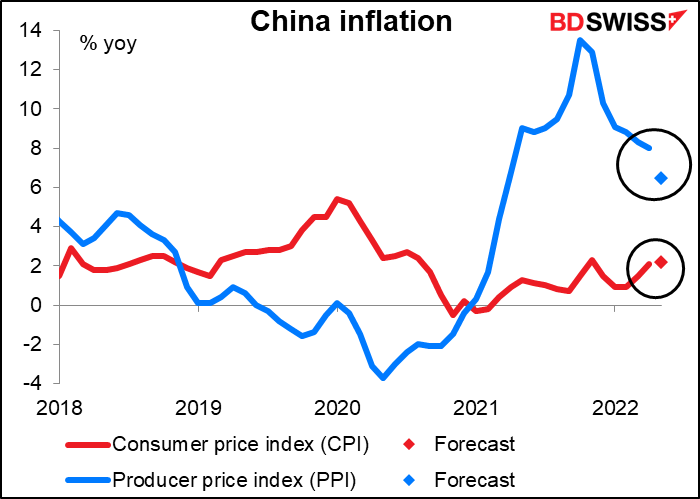