You are at:Home»MARKET PREVIEW»Safe-havens Up, commodity currencies Down as Shanghai goes back Into Lockdown; US CPI, French Elections 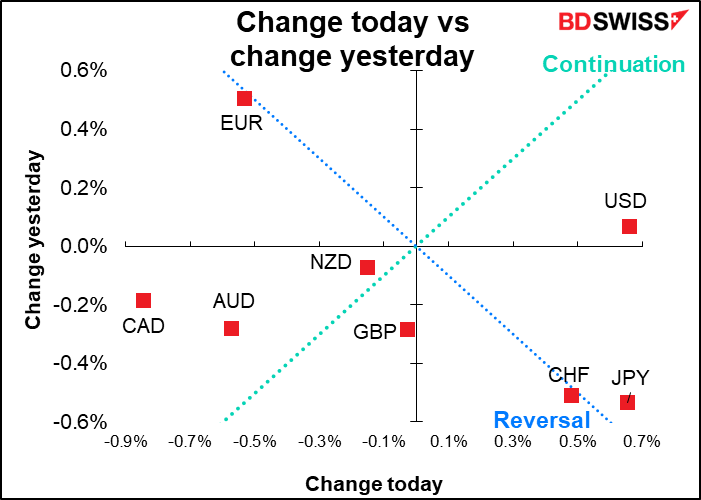 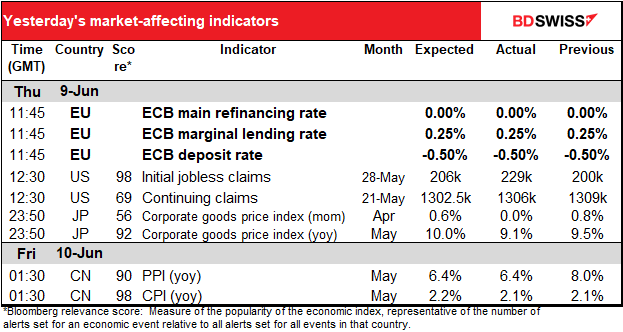 The ECB made several important announcements:

The market is now pricing in a full 50 bps hike at the September meeting and the chance of another one either in October or December for a total of around 150 of tightening this year. 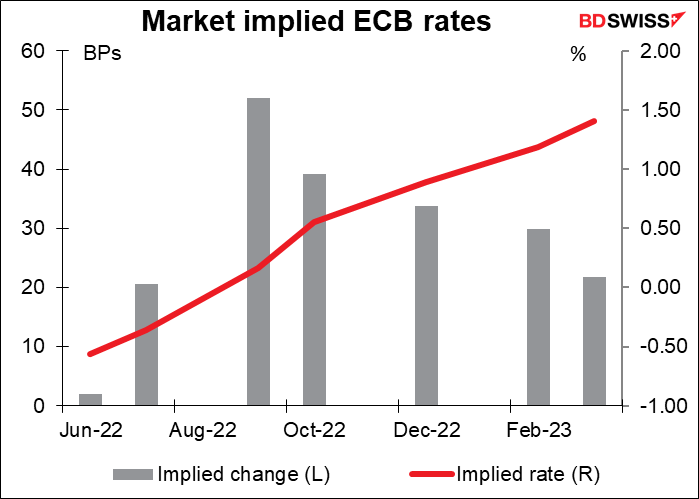 One thing they did not do is unveil a new anti-fragmentation/stability purchases mechanism to prevent spreads of peripheral bonds (e.g. Italy and Greece) from getting out of line with the rest of the Eurozone.  The market was disappointed not to have received a stronger signal or any details about the new policy tool that they keep talking about but never produce. Instead, ECB President Lagarde emphasized using reinvestments from maturing bonds in the Pandemic Emergency Purchase Programme (PEPP) flexibly to keep Italy and Greece tethered.

As you can see, that was enough to get Greek spreads to narrow but Italian spreads widened further. 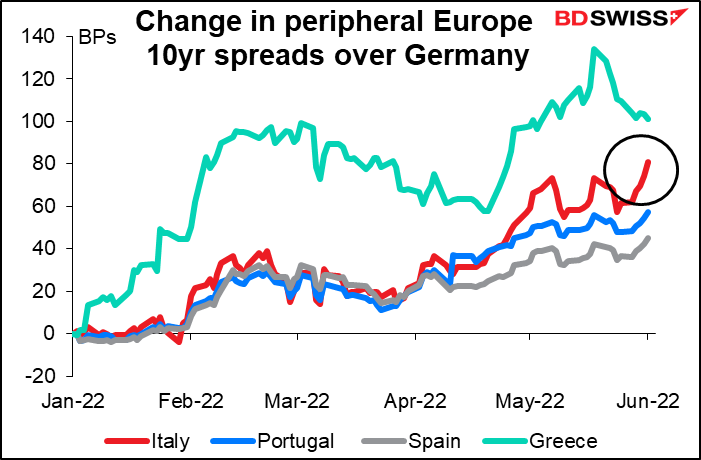 Italian spreads are now almost back to where they were during the dark first days of the pandemic, when Italy was one of the hardest-hit countries in the world and it looked like their economy would go the way of Pompeii. 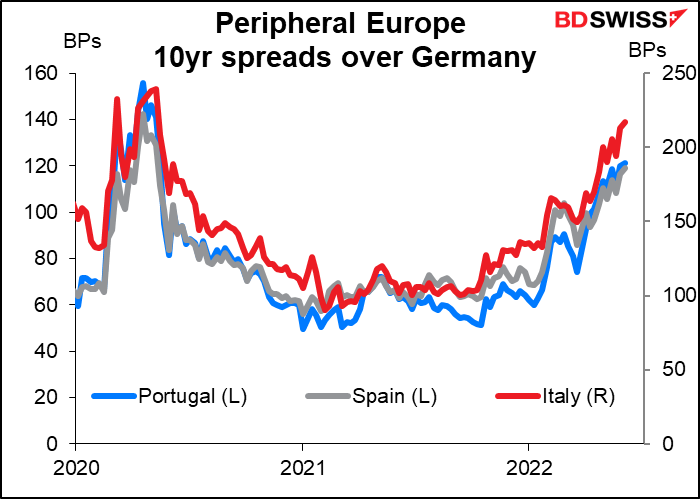 Elsewhere, the market was dominated by a risk-off mood as Shanghai and Beijing went back on fresh COVID-19 alerts after parts of Shanghai put some 2.7mn people back into lockdown and the city announced a round of mass testing. The concerns sent the safe-haven USD, JPY, and CHF higher and the commodity currencies (CAD, AUD, NZD) lower. CAD was also pressured by slightly lower oil prices, which were affected by the China activity fears.

Risk appetite was also dampened by the unexpectedly large jump in the US weekly initial jobless claims, which rose 29k vs +6k expected. While this is hardly a disaster, it is the highest level since mid-January and the largest one-week increase since last July. It ties into fears that the US economy may be slowing – which of course is the whole point of Fed tightening so it should come as no surprise to anyone in the markets. 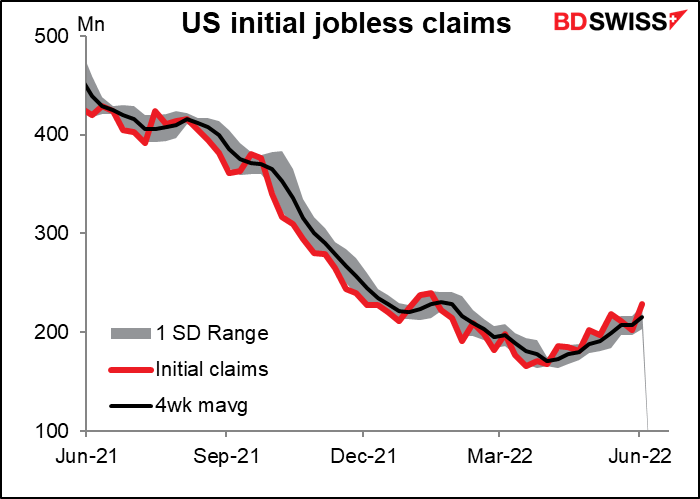 I think the rise in jobless claims is a problem with the seasonal adjustment, not the job market. If we look at the seasonally unadjusted figure, it’s still bouncing around a record low. So I’m not worried about it – yet. 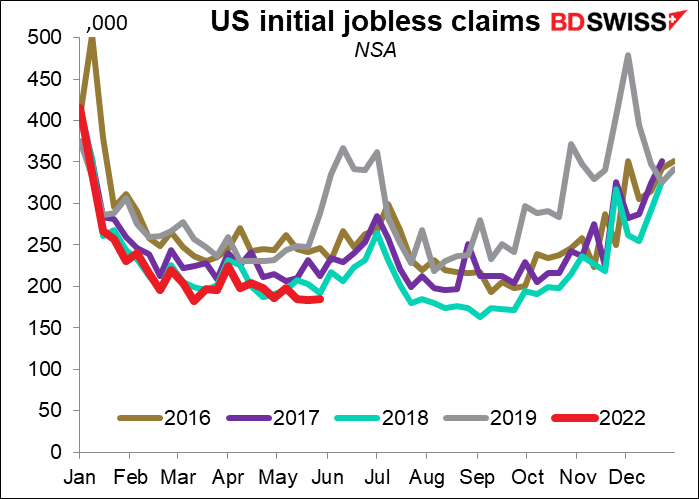 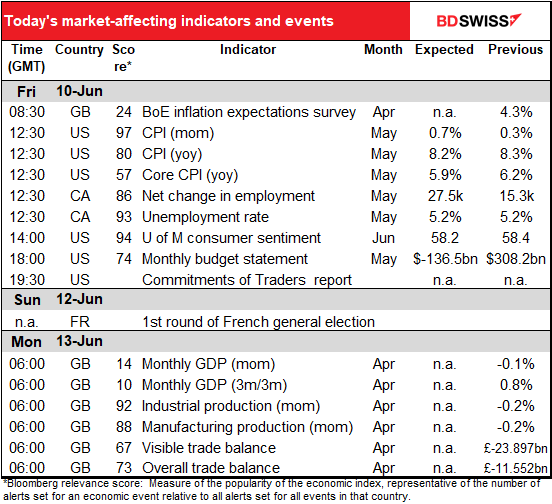 The theme of the day is inflation.

We start out with the quarterly Bank of England/Ipsos Inflation Attitudes Survey. Central bankers live in dread of inflation expectations becoming “unanchored.” That is, if people think inflation is likely to continue to be high, they’ll operate accordingly – workers will demand high pay raises and companies that raise their prices infrequently will raise them enough to cover the expected inflation until the next time they plan on raising them. The danger for the Bank then is what the medium-term inflation outlook is: what inflation expectations two years from now are (actually, for the year starting one year from now, or 1yr/1yr forward) or what they think the five-year inflation outlook is likely to be. As of the last reading, the latter two were just outside the Bank’s 1%-3% range of tolerance (at 3.2% and 3.3%, respectively). If expectations climb further then the Bank may begin to think that it’s losing control of inflation and will have to tighten faster = GBP+.  On the other hand, a fall in expectations would of course mean the opposite. Then comes the indicator you’ve all been waiting for, the dreaded US consumer price index (CPI). Technically speaking this isn’t what the Fed uses as its main gauge of inflation, but who cares? It’s what everyone talks about and refers to when they discuss “inflation.”

The year-on-year rate of headline inflation is expected to drop by 10 bps while that of core inflation is forecast to fall by 30 bps. This could well give rise to thoughts that inflation has peaked (which was the subject of my Weekly Outlook, Peak Inflation? If so, that would be negative for the dollar as it would mean that the Fed won’t have to tighten as much. 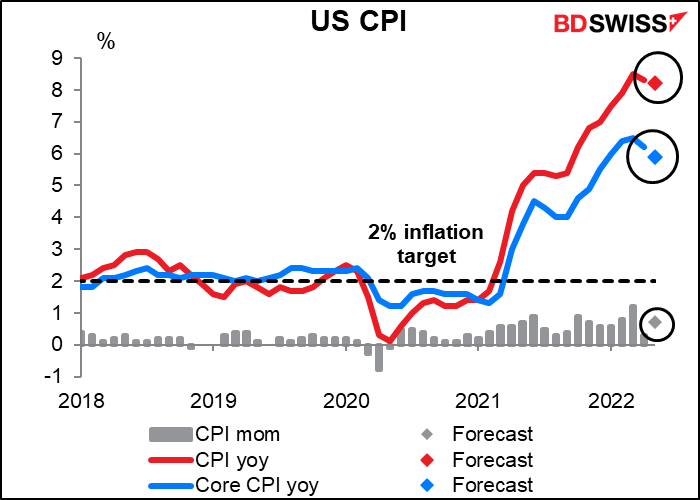 However there could be some debate. If we take the three-month change and annualize it, headline inflation is still headed higher even as core inflation heads down. 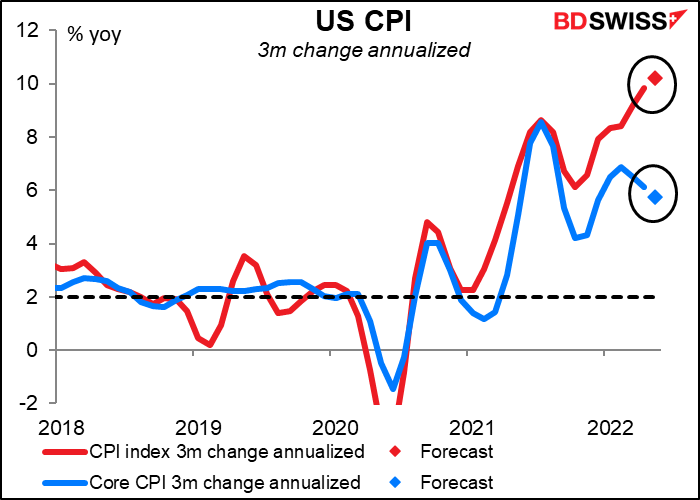 How likely are we to meet this forecast? Since the beginning of 2021 there have been 10 beats, five equals, and only one miss. It seems that economists have frequently underestimated inflation. Of course past performance is no guarantee of future performance, especially if the tide is turning – they might start consistently overestimating. 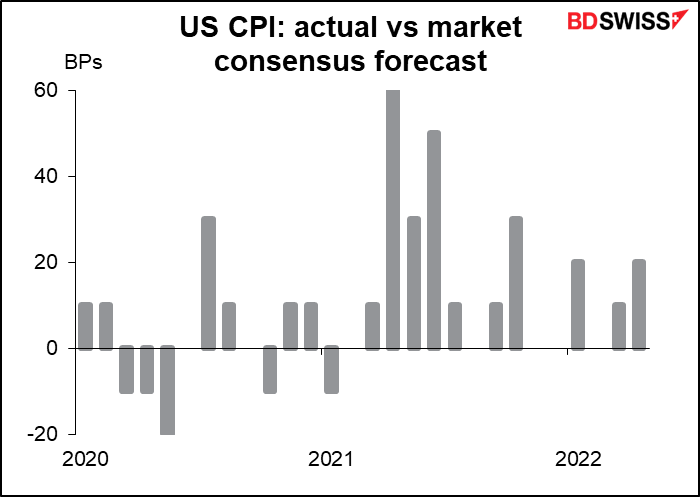 The FX market reacts immediately and strongly to the data. The movement of the currency market has one of the highest correlations to the surprise of the indicator of any that I’ve seen. 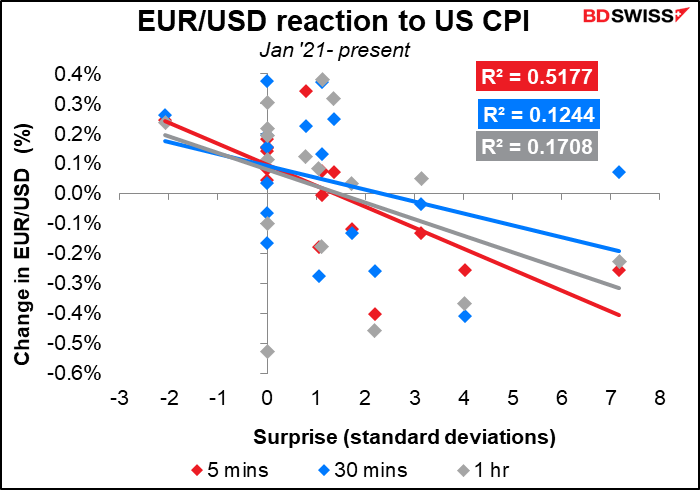 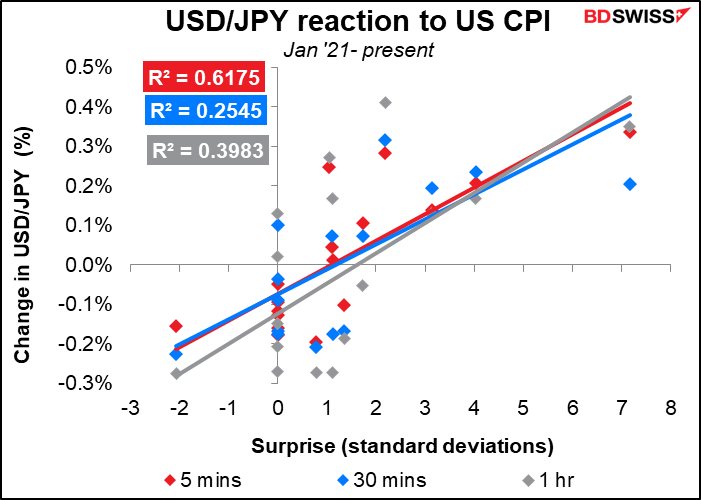 Gold and stocks, not so strong. 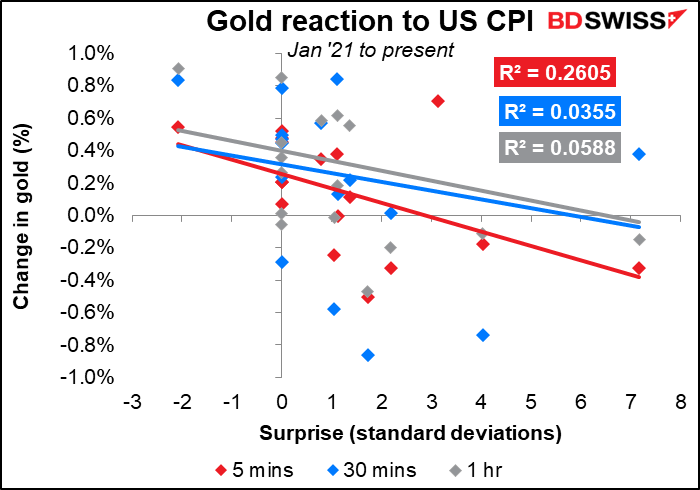 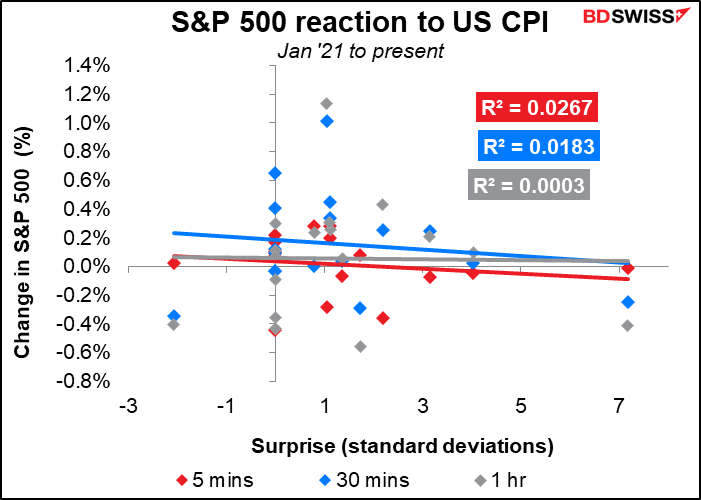 In general, the dollar has tended to appreciate following the CPI regardless of whether it hit, missed or beat estimates. That’s probably because even if it missed estimates, it was still high enough to promote the idea that the Fed would have to tighten policy. What’s most surprising though is that the impact lasts the least when it hits estimates rather than when it misses estimates (although  please remember that it hasn’t missed estimates very often recently so those examples are older than the others.) 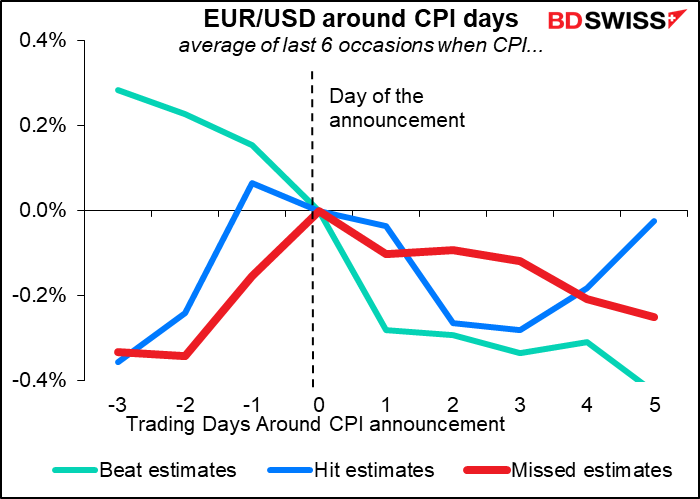 Here are the detailed charts. Looking at them, the “beats estimates” chart shows the strongest pattern with the dollar remaining stronger five days later on five of the six occasions. Oddly enough it was also stronger on four of the six occasions when the CPI missed estimates. When it hits estimates though the results are 50-50, which is what one might expect – the figure is already discounted and so the subsequent movement depends on what happens afterward, not on the CPI itself. 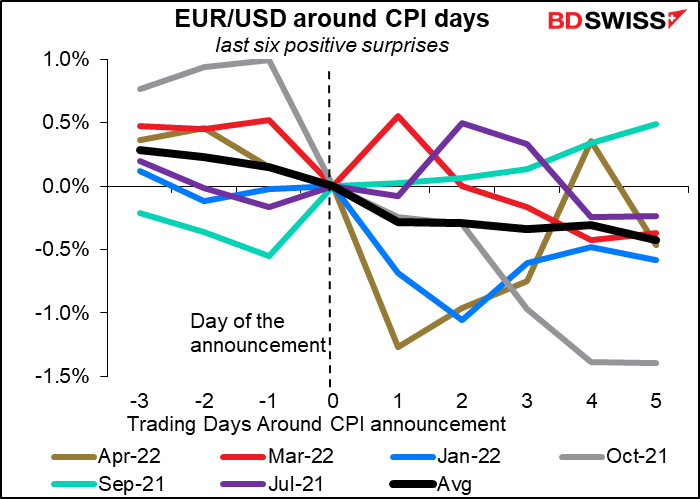 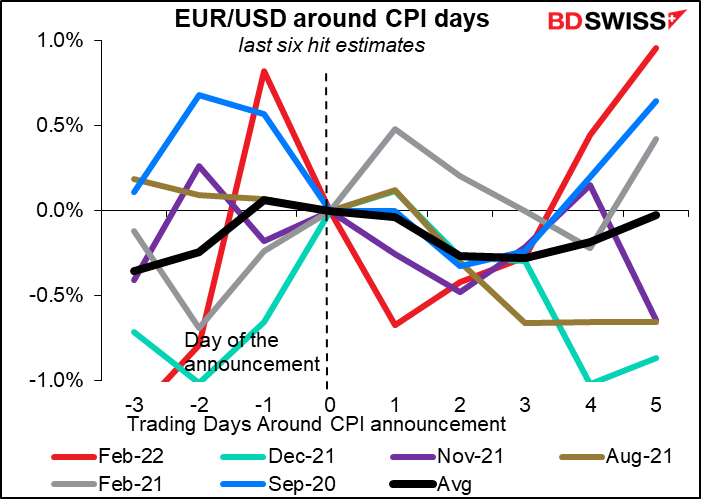 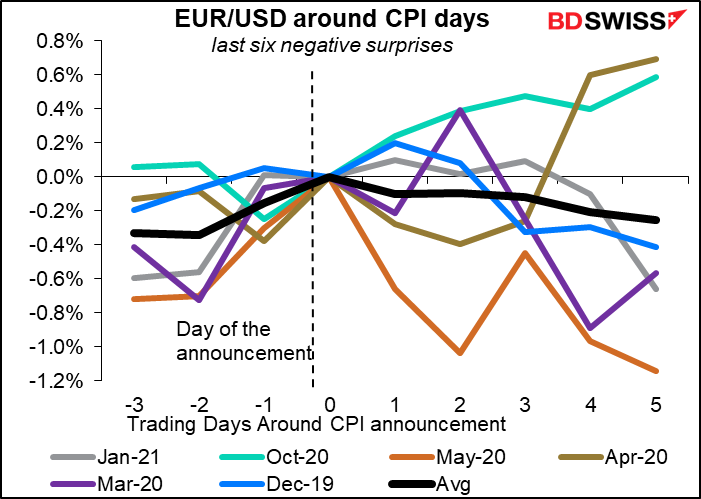 At the same time as the US CPI is released, north of the border the Canadian employment data will be coming out.

The three-month average of new jobs is trending higher thanks to the surge in February, but March, April and now May look like being relatively low. That could be due more to a lack of people who want to work rather than a lack of jobs for them. In the statement following the June Bank of Canada meeting, the Bank said, “Job vacancies are elevated, companies are reporting widespread labour shortages, and wage growth has been picking up and broadening across sectors.” Accordingly I don’t think a relatively small increase in the number of jobs signals any problem for Canada. 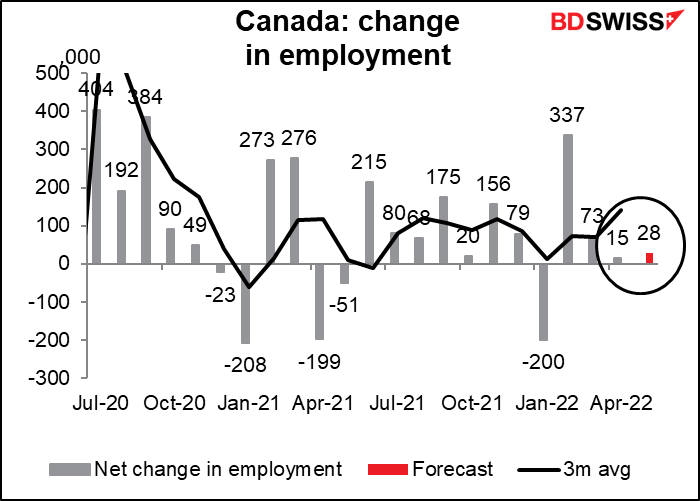 The market may be attentive to the composition of employment after a relatively large decline in full time employment in April. 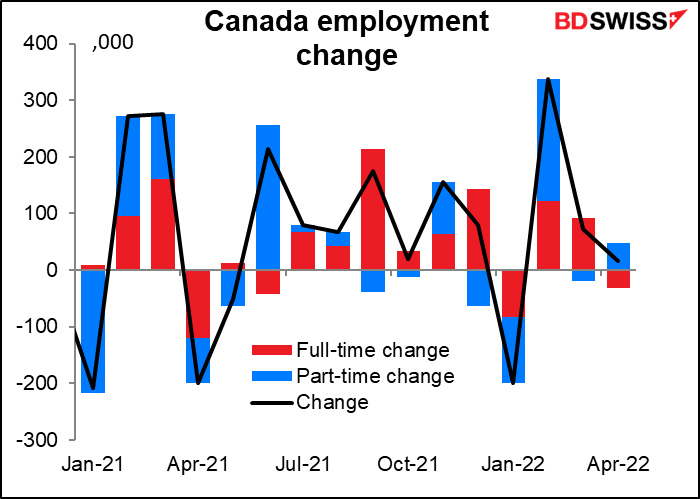 The unemployment rate is expected to continue at the record low of 5.2% (data back to 1976). 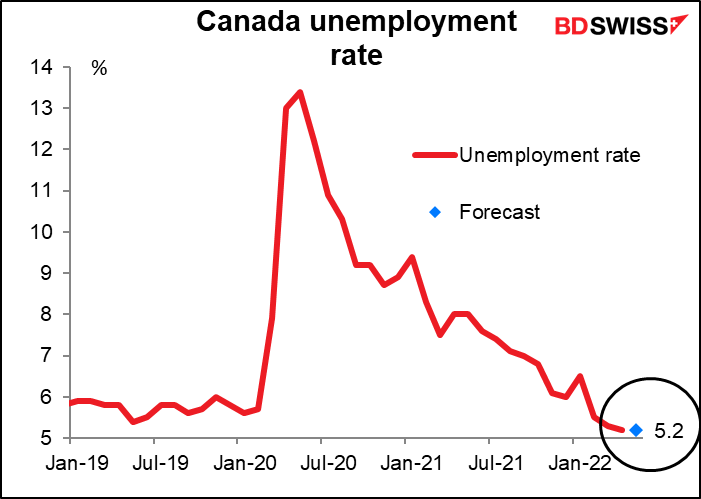 Today’s figure is likely to confirm the Bank’s view that “With the economy in excess demand, and inflation persisting well above target and expected to move higher in the near term, the Governing Council continues to judge that interest rates will need to rise further.” It should therefore be positive for CAD.

Finally, the University of Michigan releases its consumer sentiment survey. Sentiment according to this survey is in the dumps and is expected to be little changed. It’s pretty amazing how bad Americans feel nowadays even as the pandemic fades into memory and job growth is at record highs. The Atlantic wrote about this dichotomy recently in an article entitled “Everything Is Terrible, but I’m Fine.” 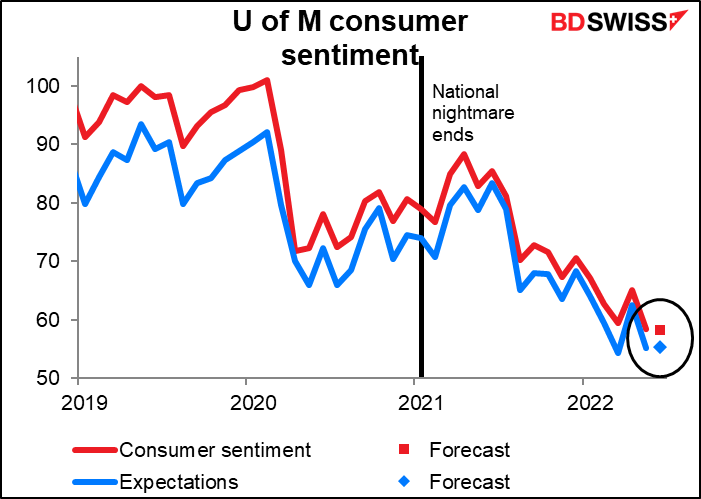 Even outside economics and finances, a record-high gap has opened up between Americans’ personal attitudes and their evaluations of the country. In early 2022, Gallup found that Americans’ satisfaction with “the way things are going in personal life” neared a 40-year high, even as their satisfaction with “the way things are going in the U.S.” neared a 40-year low. On top of the old and global tendency to assume most people are doing worse than they say they are is a growing American tendency to be catastrophically gloomy about the direction of this country, even as we’re resiliently sunny about our own household’s future.

…With greater access to news on social media and the internet, Americans are more deluged than they used to be by depressing stories…This is leading to a kind of perma-gloom about the state of the world, even as we maintain a certain resilience about the things that we have the most control over.

This is why personally I wouldn’t read too much into the U of M survey as a leading indicator nowadays.

Perhaps reflecting this fact, the market reaction to the survey isn’t particularly strong even though the Bloomberg relevance score indicates that it’s one of the most closely watched US indicators. 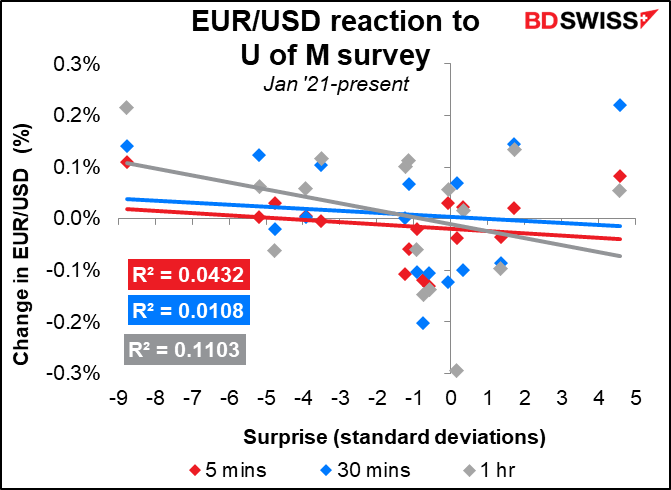 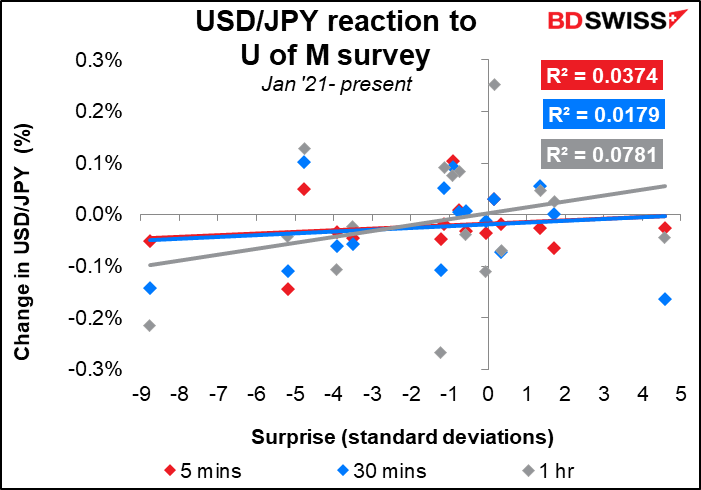 According to Politico, while the new left electoral alliance NUPES is doing well in national voting intention polls, Politico’s seat projections still expect Macron’s camp to win a majority. On the other hand, it’s also possible that Macron’s LREM party remains the biggest group in parliament but gets less than a 289-seat majority. That could potentially gridlock the National Assembly. Reconquête (Reconquest in English) (REC) =  a right-wing nationalist party in France launched in late 2021 by Éric Zemmour, who is the current leader.

A better-than-expected showing by NUPES could dampen sentiment for the euro somewhat. The worst-case scenario would be if it appears that the RN and REC hold the balance of power in the Assembly, which would leave whoever forms a government beholden to their anti-Europe bias. On the other hand if Macron’s LREM does better than expected there might be a relief rally in EUR. Although to tell the truth, most eyes are probably focused on the ECB anyway.

Then Monday morning, bright and early, the UK has its short-term indicator day. Unfortunately no forecasts are available yet. 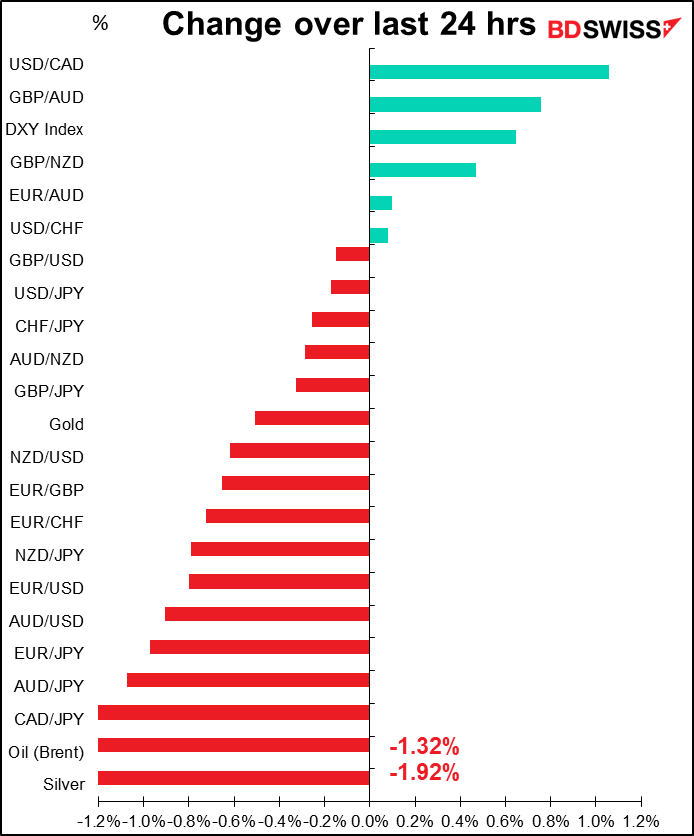