You are at:Home»MARKET PREVIEW»“Risk-on” Mood sends Commodity Currencies Up, safe havens Down; Lots of speakers 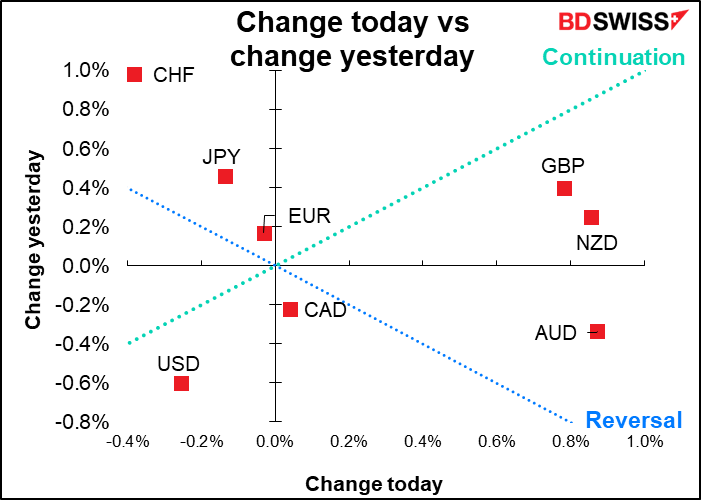 AUD and NZD were the biggest winners since Friday morning. I doubt if this had anything to do with the Labor Party victory in the Australian Federal election, as was widely expected. That’s because a) AUD didn’t gap higher at the opening Monday, as would’ve been expected in such a case, and b) NZD kept pace with AUD, suggesting that both were being moved by outside forces – probably the recovery in Asian stock markets this morning (except for China). 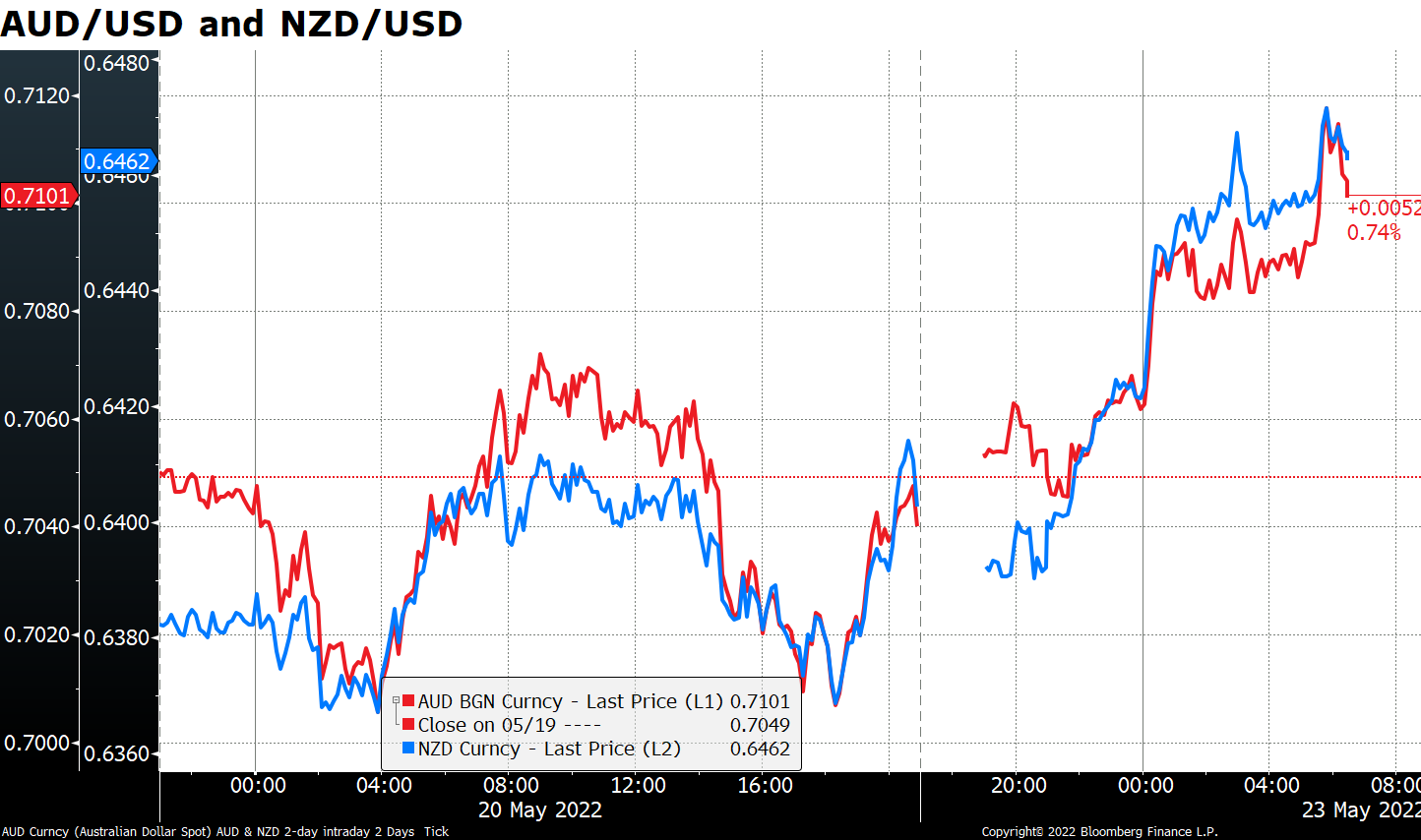 The jump in the two currencies came shortly after the S&P 500 futures started trading, which suggests to me that it’s more of a general “risk-on” trade than anything having to do particularly with Australia or New Zealand.

As for the Australian election, the differences with the outgoing regime focus on climate change, women’s issues and anti-corruption efforts. There’s not likely to be a major change in economic policy and so the election probably won’t have much impact on the exchange rate.

The “risk-on” mood would also explain why CHF, USD, and JPY are the main losers today, as risk sentiment improves.

The equity markets are worth a word. The S&P 500 was -20.6% from its peak earlier this year, i.e. in official bear market territory (defined as down 20% or more) as the trading day finished in Europe on Friday. But there was a late rally and a large market-on-close imbalance to buy (for no obvious reason), which send the index from down around 2.3% on the day to up fractionally (+0.01%). Nonetheless, the S&P 500 was down for the seventh consecutive week, the first time this has happened since the dot-com bubble burst in 2001. At the time of writing the S&P 500 futures are indicated +1.0%.

Almost no net change in speculators’ net USD position over the last week.

Specs added a bit to their net MXN and EUR longs and trimmed their JPY shorts. But that was offset by an increase in CAD and NZD shorts. (NB – the value of each contract is different. One EUR contract is currently worth around $132k but one MXN contract is only $25k.) 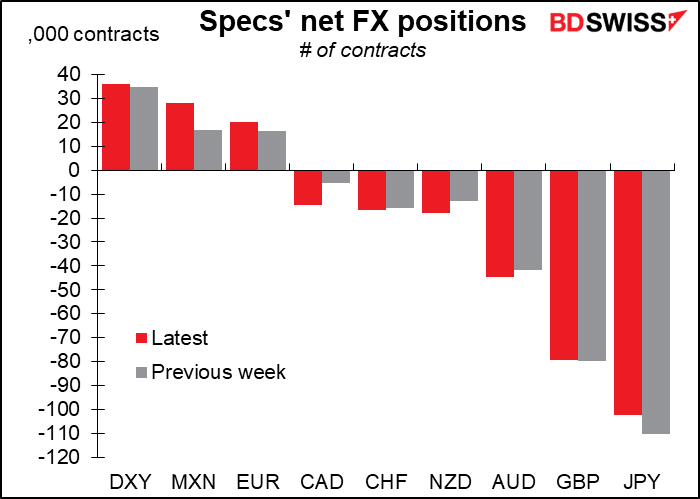 NZD shorts are the most they’ve been in two years. 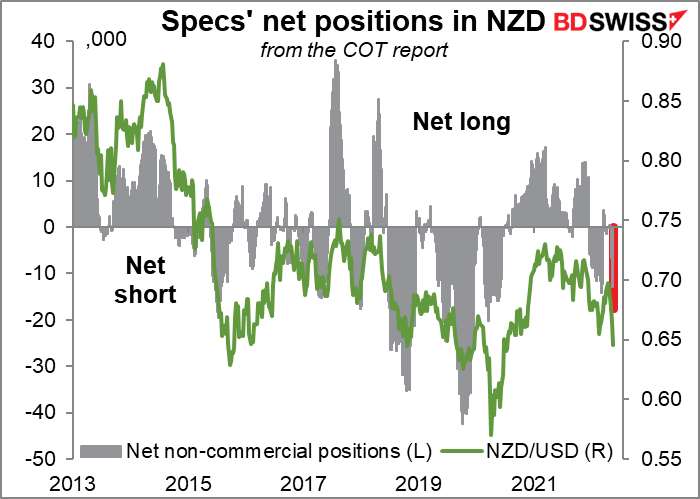 Hedge funds went from almost flat CAD to significantly short. They also increased their NZD shorts. On the other hand they trimmed their EUR shorts a bit. 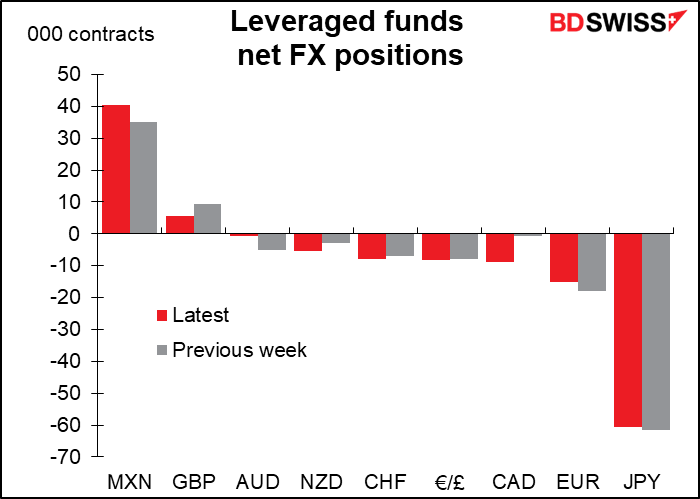 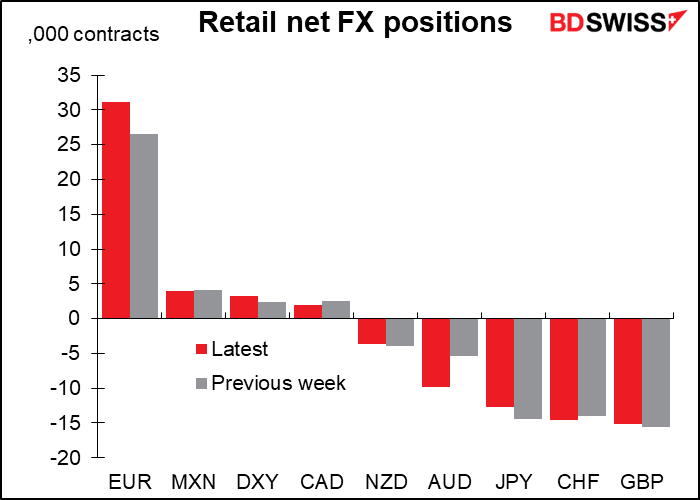 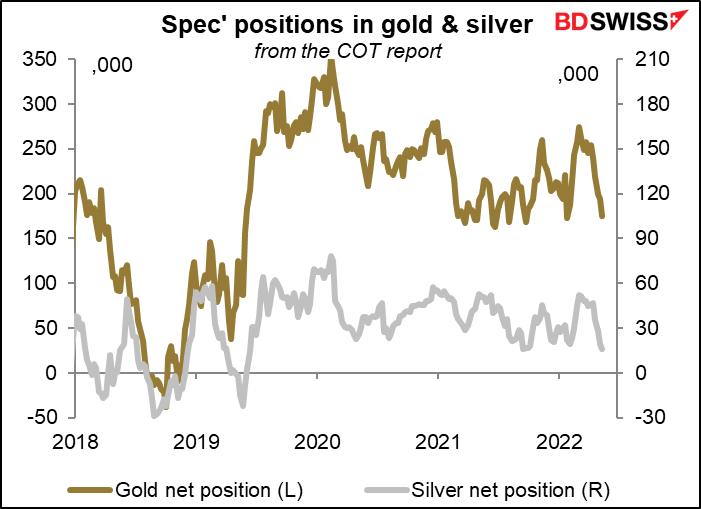 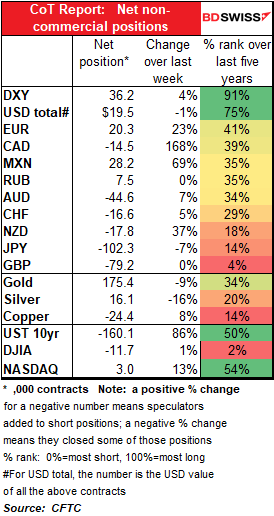 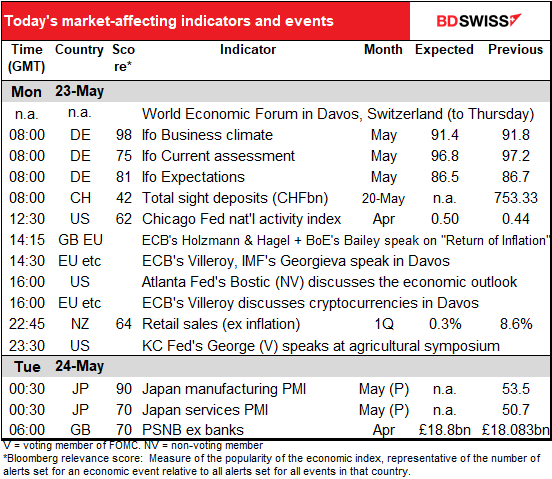 US President Biden is in Japan today. His talks with PM Kishida centered on national security in the Asia-Pacific region, especially North Korea’s missile program and China’s activities. Biden and Kishda will also meet with the leaders of India and Australia in a “Quad” meeting. This is likely to include the roll-out of the Indo-Pacific Economic Framework (IPEF), an economic alliance led by the US. This alliance is expected to supplement the ill-fated Trans-Pacific Partnership (TPP), which TFG refused to join, and the Regional Comprehensive Economic Partnership (RCEP), neither of which includes the US. However, the IPEF focuses on economic national security rather than free trade, nor does it have the force of an international treaty.  As such, it’s likely to have only minimal economic impact.

My main hope is that President Biden manages to do better than former President George H. W. Bush, who threw up on then-PM Miyazawa at a banquet in 1982.

President Gerald Ford was the first American president to visit Japan while in office, in 1974. His state dinner went off without a hitch, except for some difficulties he had using chopsticks under the gaze of bemused geisha. 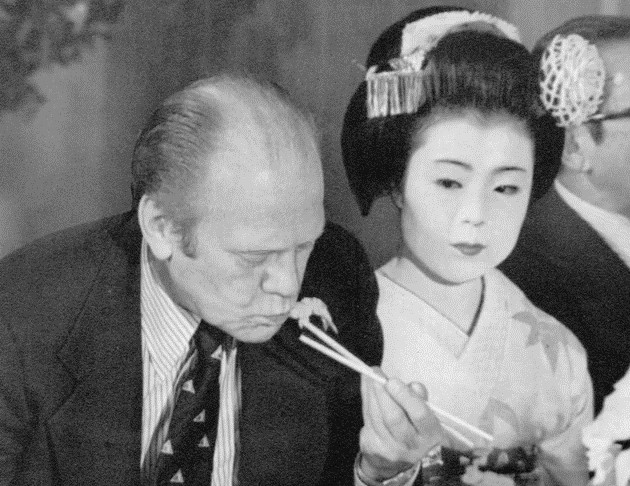 The World Economic Forum (WEF) in Davos, Switzerland starts today! Usually it’s held in the winter, but it hasn’t been held for a couple of years (owing to the virus) so they decided to do it in the summer. What this means is that every half hour or so some bigwig is going to appear on CNBC or CNN or some TV channel saying something that could roil the markets. I’ll list in my daily calendar the major appearances that are known & scheduled but there will be a lot of others popping up randomly. The WEF runs until Thursday. You can see the entire schedule here.

There’s also a Eurogroup meeting today (the finance ministers and central bankers from the Eurozone countries) but I don’t think anything is likely to come out of it.

Aside from that, the week starts in Europe with the Ifo business climate survey. This is like the US ISM survey, a survey of business people that predates the Markit purchasing managers’ indices (PMIs) and so has had a loyal following for decades. The index was recovering until Russia invaded Ukraine and then it lurched lower. Now it’s stabilizing – expectations are that it’ll be just a bit lower. No market implications, I’d say. 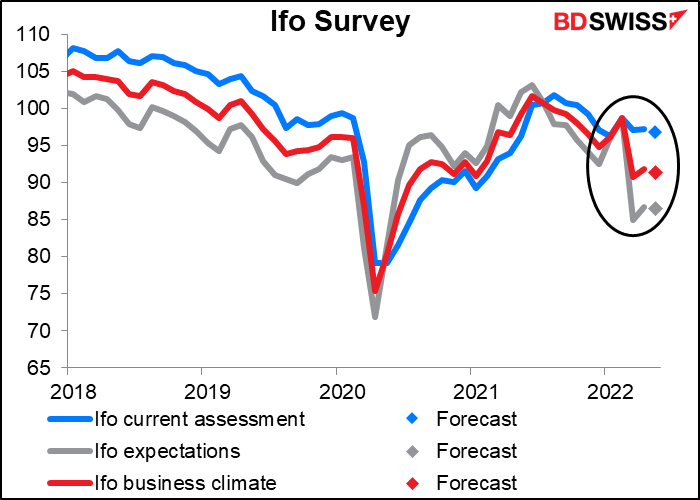 There’s likely to be intense interest in this week’s Swiss sight deposits after Swiss National Bank (SNB) President Jordan last week said that “the SNB will take care to maintain price stability,” which was taken as a hint that they might raise rates or allow the CHF to appreciate since inflation there is running at 2.5%, above their 2% target. The question is whether they’ve already decided to step away from the FX market or are they still in. The fall in EUR/CHF last week suggests that maybe they’ve stepped away a bit. 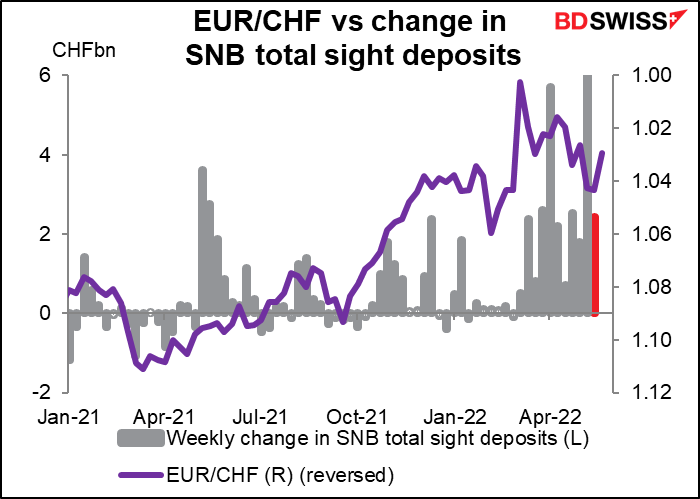 After that it’s largely a bunch of speeches. The Chicago Fed national activity index doesn’t get a lot of attention as it’s a month behind everything else and pretty volatile, too. Nonetheless it’s expected to be pretty solid so it could reinforce the idea that the US economy is doing well – USD+ 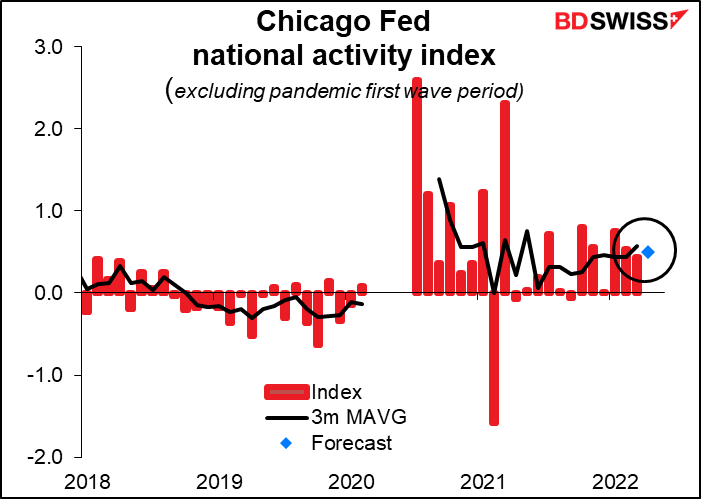 New Zealand retail sales also don’t get much attention from the market either, but here’s a graph just in case. Lots more volatility since the pandemic began. Then overnight the preliminary purchasing managers’ indices (PMIs) begin, starting with Japan. (Australia too, but nobody pays attention to that for some reason.) There’s never a forecast for the Japan PMIs so here’s a graph just to show you how they’ve been going. Answer: the service-sector PMI has been struggling to keep above the 50 “boom-or-bust” line that signifies the line between contraction (< 50) or expansion (>50). Manufacturing on the other hand recovered completely and is now trending lower, as are most other countries’ manufacturing PMIs. 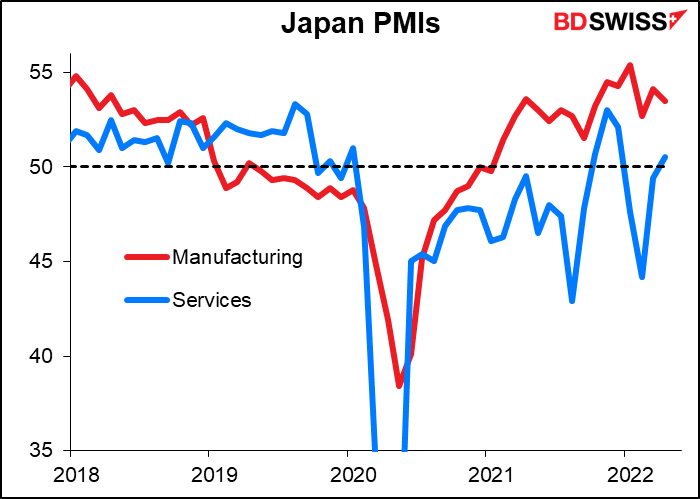 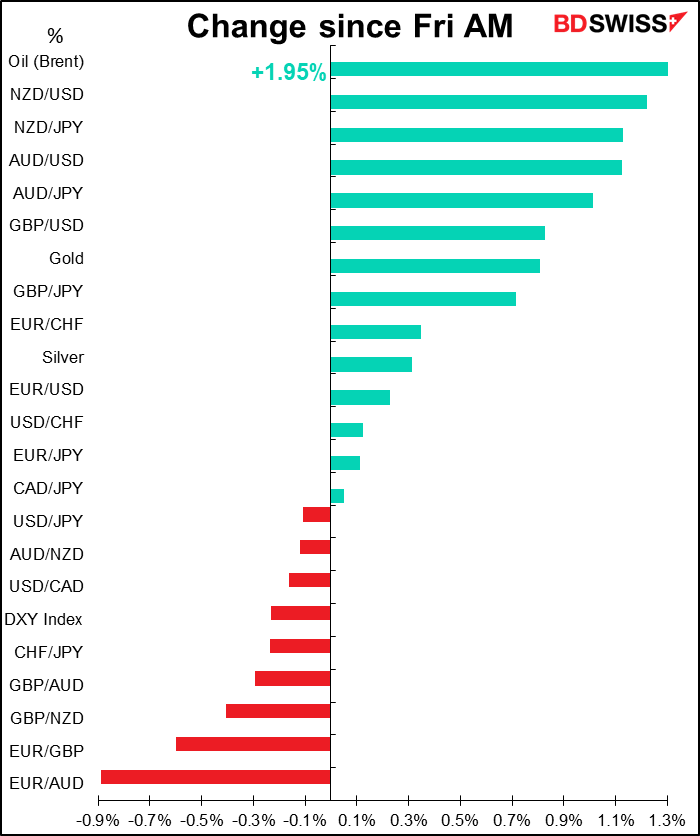