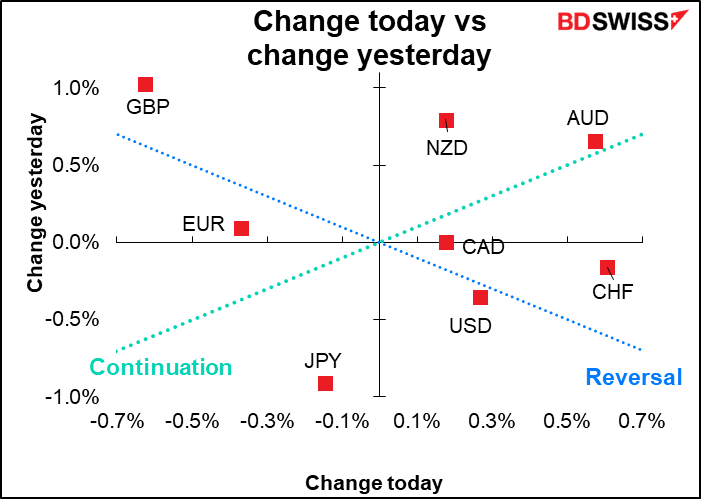 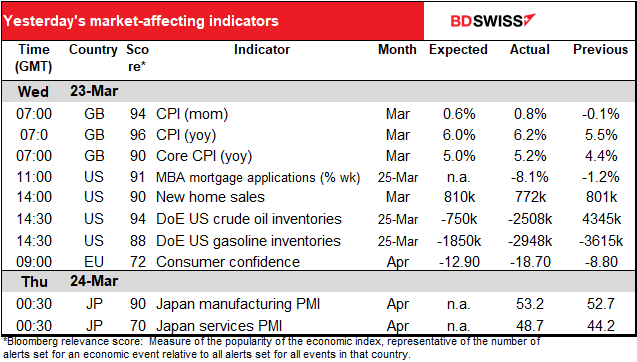 I hadn’t expected the UK inflation data to make much of a difference to GBP, but still I’m surprised to see the currency at the bottom of my table this morning.

The inflation data was higher than expected (see table above) but that just set off a round of profit-taking in GBP, which pushed the currency lower. The Spring Statement gave it a small lift but that wasn’t sustained and the currency flatlined from there. It’s headed back up a bit this morning.

UK Chancellor Rishi Sunak’s Spring Statement did little to boost growth. He announced no significant increases in spending in real terms, just some modest measures to shield households from the soaring energy prices and tax cuts that barely offset the sizeable tax windfall coming from forecast revisions. All in all the Office for Budget Responsibility (OBR) projects that tax revenues will increase to 36.2% of GDP by 2025 from 33.0% in 2019, the highest level of taxes since 1949. The figures disappointed some investors who had looked for an increase in welfare and pension payments to partly offset the impact of surging inflation on struggling households.

With the tax burden rising faster than the spending share of GDP, the OBR projects that the UK’s public debt and deficit will fall somewhat faster as a % of GDP than previously expected. That boosted the gilts market, which may also have contributed to the weakness in GBP. 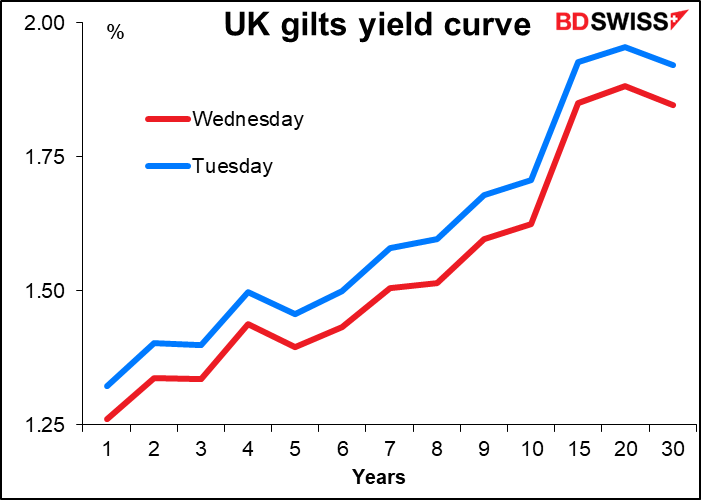 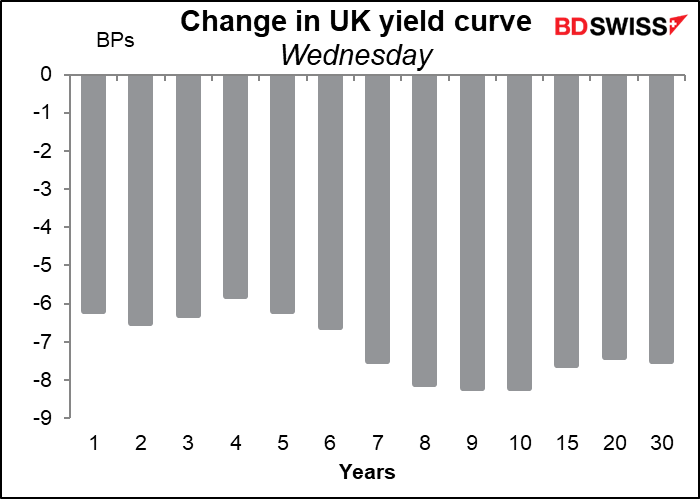 Elsewhere in the market it’s unusual to see CHF and AUD both rising like this, a “safe-haven” currency vs the main barometer of global growth. CHF may have been gaining ahead of today’s Swiss National Bank (SNB) meeting (see below) or perhaps it’s the counterpart to the weaker EUR as the fighting in Ukraine drags on.

It’s also noticeable that CAD is lagging AUD even as oil prices climb higher. On the contrary, AUD/CAD largely tracked oil prices higher. The falloff in stock markets globally didn’t do much to derail the “global growth” barometer. 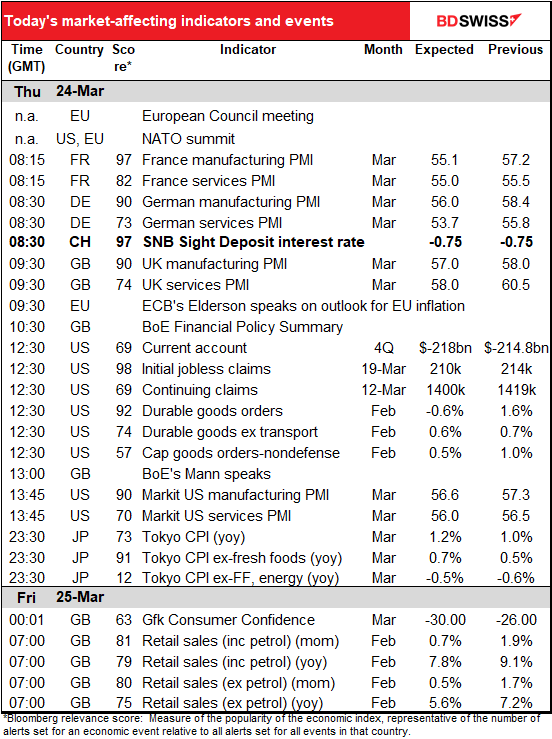 First off we have two big meetings:

The heads of state of the 28 European and two North American member countries of the North Atlantic Treaty Organization (NATO) will gather in Brussels for an extraordinary meeting to discuss next steps in relation to the Ukraine conflict. They will discuss imposing more sanctions on Russia, plus emergency aid and military cooperation. Poland and the Baltic states are pushing for tougher sanctions, including an EU ban on Russian oil and gas imports. However Germany and some other European countries that are heavily dependent on Russian gas, are opposed.

US President Biden will attend both meetings, which is quite unusual as the US President doesn’t usually show up at EC meetings. According to his redoubtable press secretary, the fabulous Jen Psaki, President Biden will “discuss ongoing deterrence and defense efforts,” during the NATO summit and reaffirm the US’ commitment to its NATO allies. “He will also join a scheduled European Council summit to discuss our shared concerns about Ukraine, including trans-Atlantic efforts to impose economic costs on Russia, provide humanitarian support to those affected by the violence and address other challenges related to the conflict,” she said.

Market impact: the importance of these meetings is if they can pressure the wealthy and comfortable Western European countries to sacrifice more for the sake of their embattled Eastern European neighbors. If they do rachet up the pressure on Russia, Russia will probably respond by ratcheting up the pressure on them, eg by cutting off oil or grain exports entirely. This will further depress the European economy and increase prices.

Speaking of the European economy, the big indicators today are the preliminary purchasing managers’ indices (PMIs) from the major industrial economies. We’ve already had Japan’s, which were much better than I expected (even though there are no forecasts). They were both up, with the service-sector PMIs up a strong 4.5 points (although still below 50). The market is looking for all the other countries’ PMIs to fall, both manufacturing and service-sector. 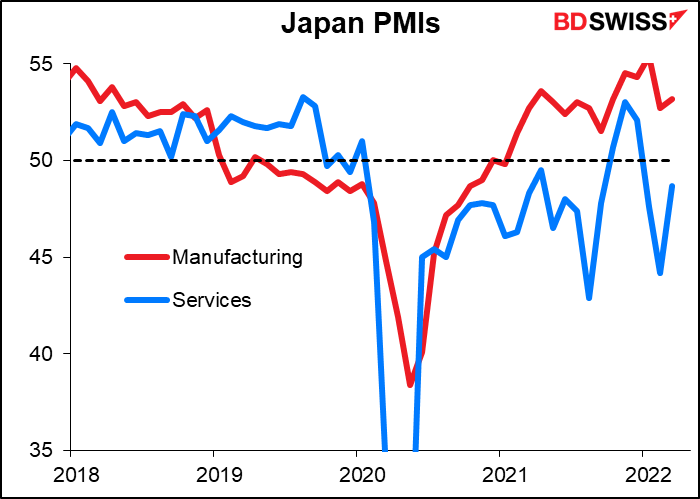 As for the other countries, they’re expected to be bad, especially manufacturing. That’s a change. For the last two years the lockdowns to deal with the virus have hit the service sector hardest. Now those restrictions are pretty much lifted; instead it’s the surge in energy prices and the disruption to world trade that’s affecting economic activity.

We should keep things in perspective, though. The PMIs are all expected to say well in expansionary territory. That means any talk of “stagflation” is premature, much less “recession.” But this certainly isn’t the direction we want to see things going in. 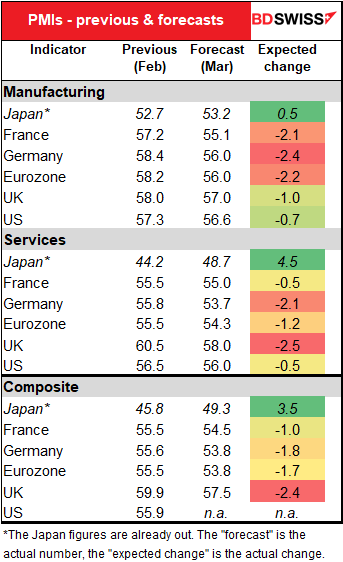 Tucked in among the PMIs will be the quarterly Swiss National Bank (SNB) meeting. The SNB hasn’t changed its policy rate since January 2015 so I don’t think it’s going out on a limb to say I don’t expect any change at this meeting. 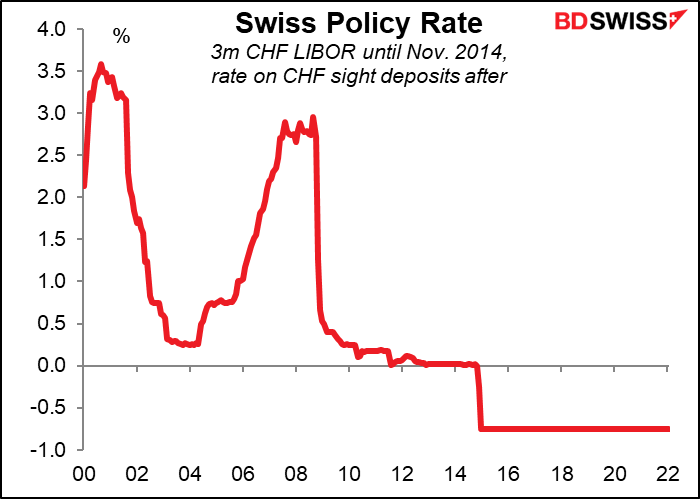 The key thing will be what if anything they say new about FX intervention. Usually the statements following the meeting contain the following boilerplate statement:

[The SNB]… remains willing to intervene in the foreign exchange market as necessary, in order to counter upward pressure on the Swiss franc. In so doing, it takes the overall currency situation into consideration. The Swiss franc remains highly valued.

I certainly don’t argue with the statement that the franc “remains highly valued.” It’s grossly overvalued especially vs EUR, its much-larger next door neighbor (which is why everyone in Geneva goes shopping across the border in France). The OECD rates it the 2nd most overvalued currency vs USD, 16% overvalued (NOK is #1 at 22%) and the Big Mac index has it at #1 (23% overvalued). Conclusion: if you want to eat at McDonald’s, don’t do it in Switzerland. 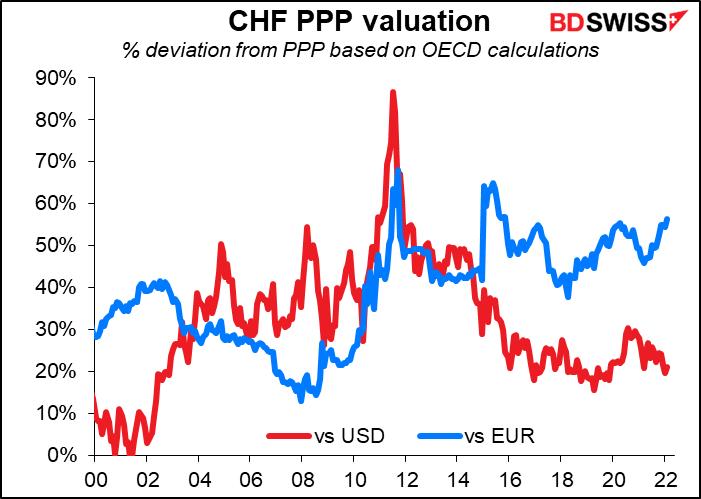 The key thing we’ll be looking for at this meeting is any new insights into their intervention policy. They did intervene in size a few weeks ago when EUR/CHF broke through parity for a moment (blue bar). They also released an unusual special statement reminding people that they remain willing to intervene and denying that they pay special attention to any particular currency pair, which no one believes (42% of Switzerland’s trade, being 37% of exports and 46% of imports, is with the Eurozone. #2 is the US, with 16%.) But in the latest week their intervention fell back to more typical levels (red bar), although still above what they were doing for most of January and February. 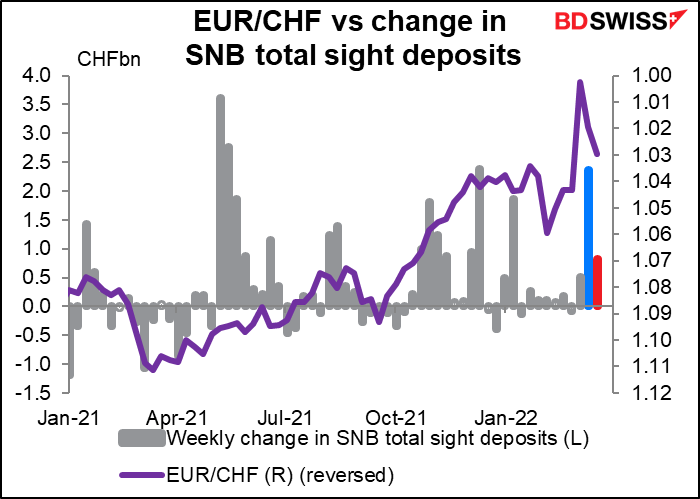 Likely market impact: Looking at the past six SNB meetings, USD/CHF has tended to trend higher in the days following the meeting, except for after the Sep. 2020 meeting. Of course as usual please bear in mind that past performance is no guarantee of future performance. 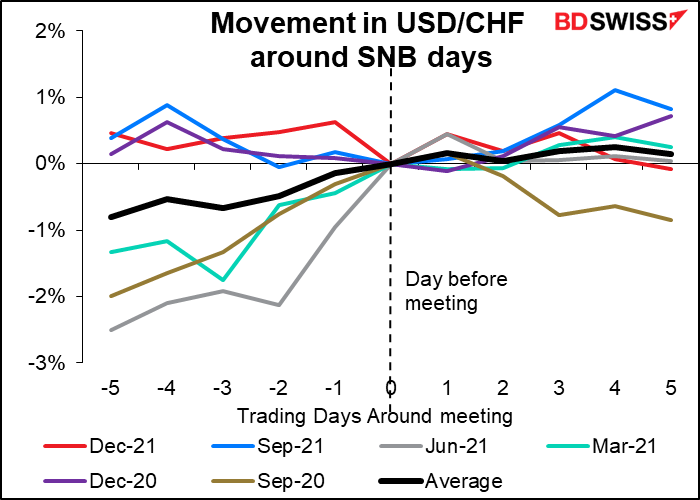 Next up is the weekly US initial jobless claims. This is no longer such a big deal so I’ll just present a graph and be done with it. 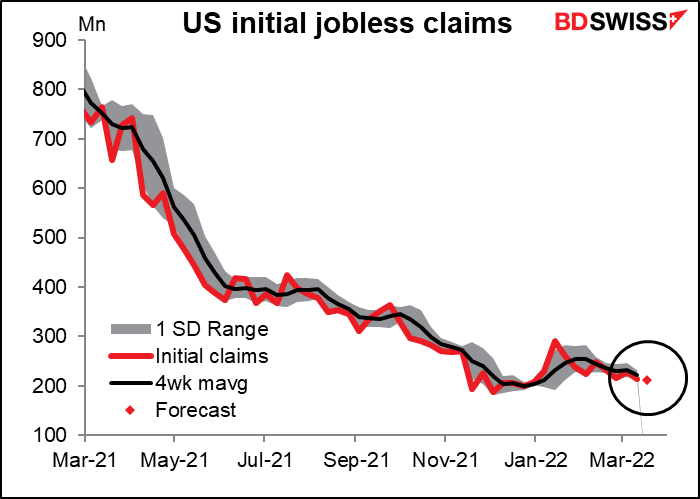 US durable goods orders are one of the major indicators out from the US. They’re expected to be down this month, partly in reaction to three months of pretty strong growth but more to the point because of a fall-off in orders at Boeing. 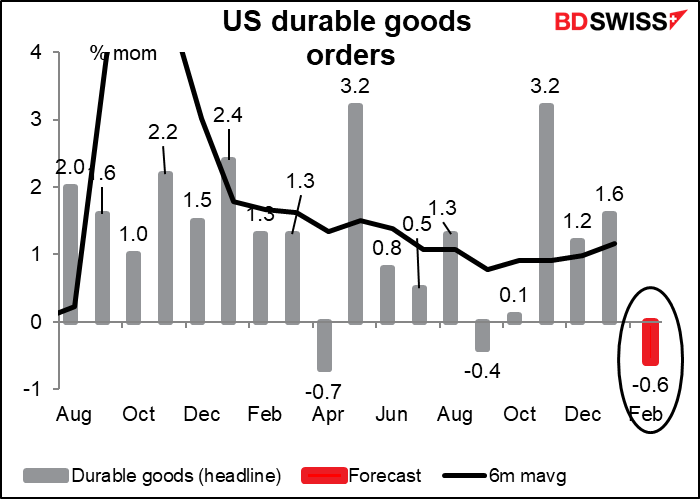 Excluding transportation orders they’re forecast to be up moderately – slightly below trend (+0.7% mom) but not greatly. 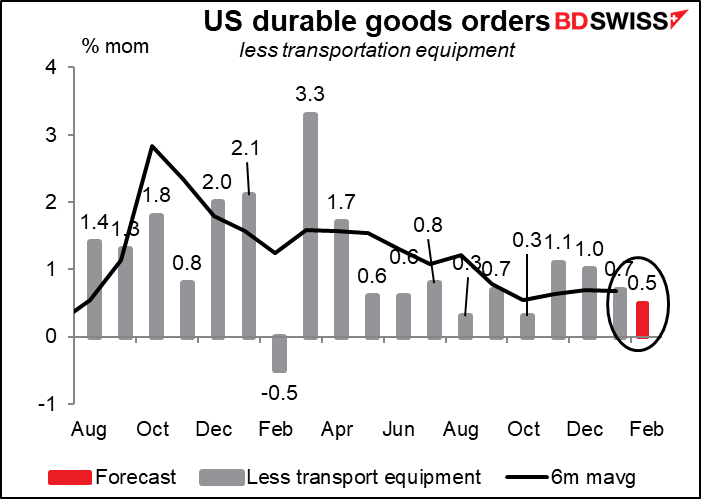 Especially when you consider that this level of headline orders, even assuming the forecast mom  decline, would be 20% above the pre-pandemic level, it’s not bad at all. 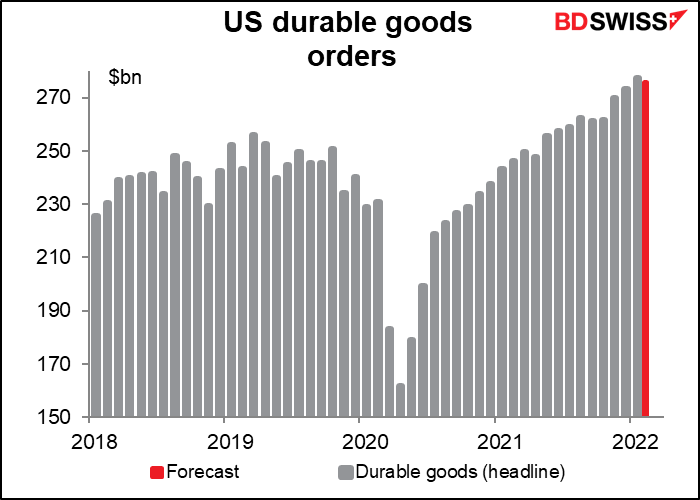 Overnight we get the Tokyo consumer price index (CPI). It’s expected to rise further to 1.2% yoy, which doesn’t sound like much but for Japan would be the highest in about two years. Meanwhile the Japanese-style “core” measure (excluding fresh foods), which is what the market pays the most attention to, is forecast to remain below 1% and the “core-core” measure (excluding food and energy) is forecast to remain in deflation at -0.50% yoy. Imagine that – deflation in today’s world! Persistent low inflation may keep JPY on a weakening trend (USD/JPY moving higher). 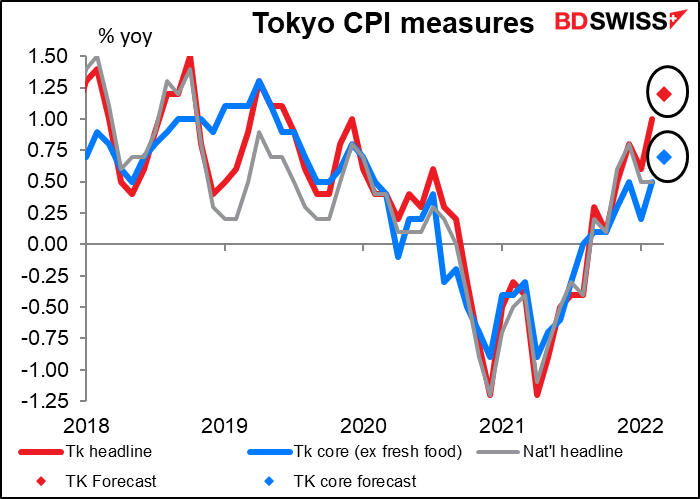 I have to admit, the FX market’s reaction to this indicator isn’t very strong. The response to the headline figure is no better. I think until inflation exceeds the 2% target there’s no hope that the Bank of Japan will change policy and so no reason to buy or sell yen based on the figure. 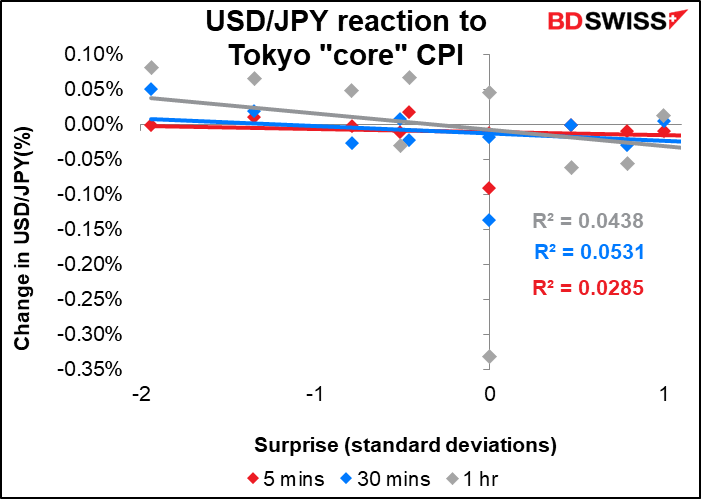 Then Friday morning in Europe we get the UK retail sales figures. They’re expected to slow following the big jump in the previous month. Additionally, consumer confidence has been falling steadily for the last few months and the recent leap in energy and food prices is not likely to induce anyone to go out on a shopping spree. However I don’t think the decline will be enough to change anyone’s mind about the state of the UK economy. GBP-neutral. 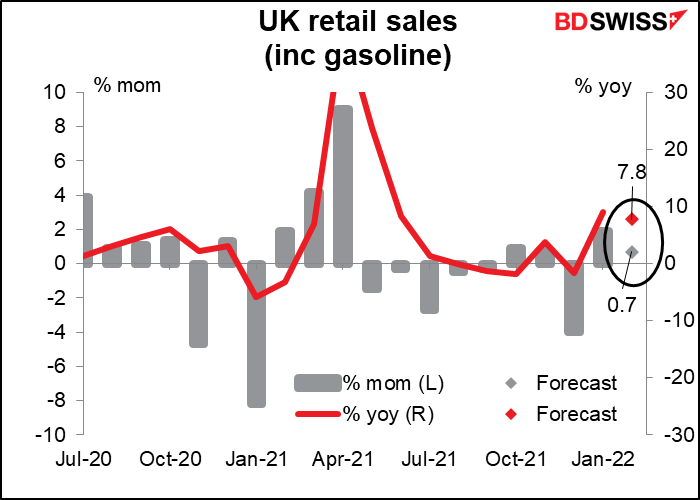 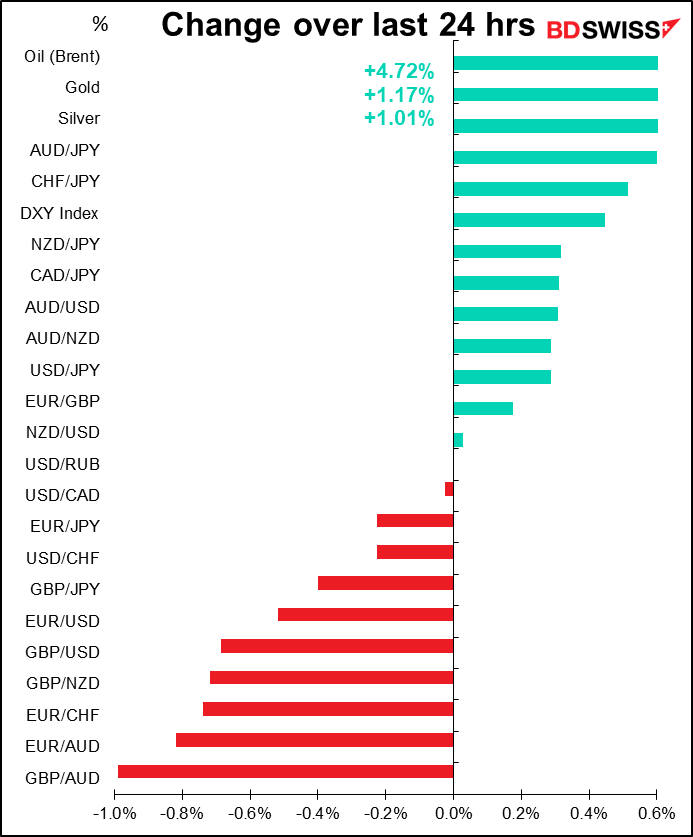