You are at:Home»Market Preview»AUD Up, JPY Down Down Down; EC meeting, Ifo index 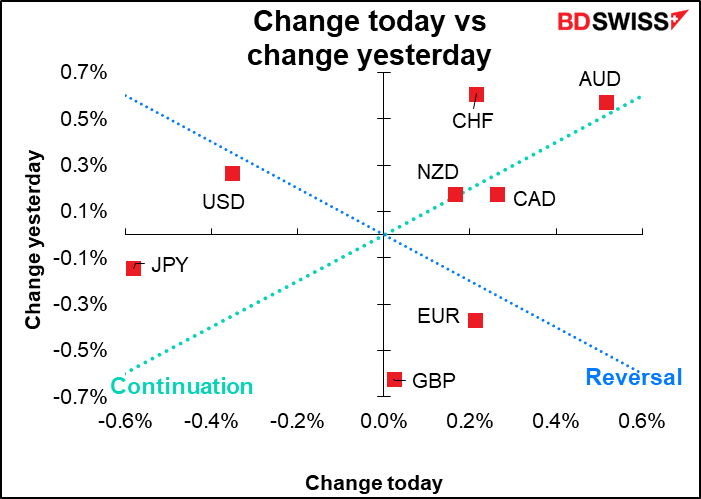 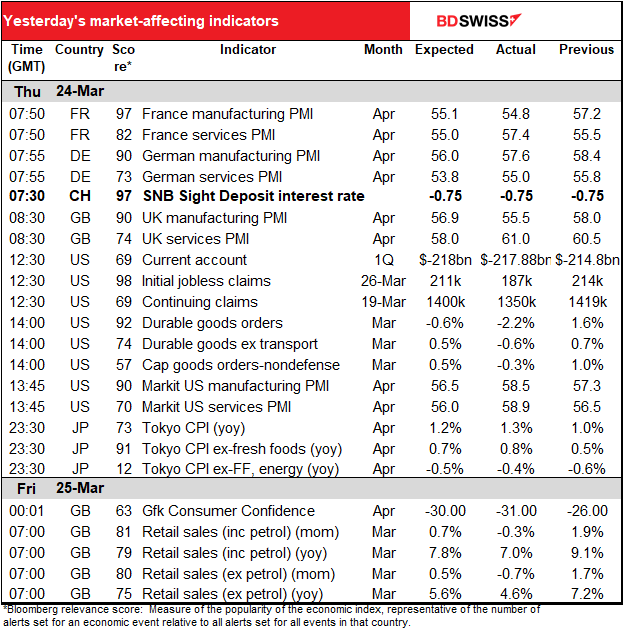 The main story today is the plunge in the yen. What was particularly noticeable is that USD/JPY moved higher during all three major trading zones (Asia, Europe, & US market times), indicating a general market consensus on the trend for the currency.

In part the currency may just be following the general “risk-on” mood as exemplified by the continued recovery in the S&P 500 futures.

But I think the interest rate differential with the rest of the world is starting to make a big difference.

The spread between US and Japanese yields has been a major driver of USD/JPY for some time now.

Yesterday the market was particularly watching the short end as fed fund futures continue to discount an ever-higher fed funds rate. The December futures are now pricing in a 2.19% fed funds rate, meaning eight hikes are likely this year. 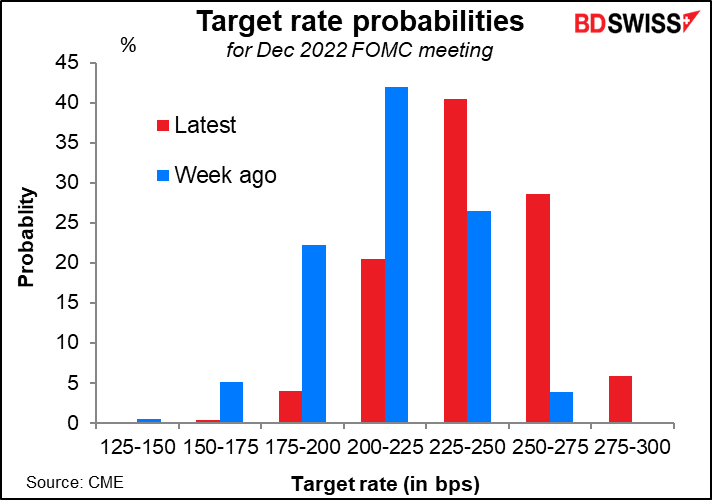 That implies a 50 bps hike at some point. The May fed funds futures are now discounting exactly that. 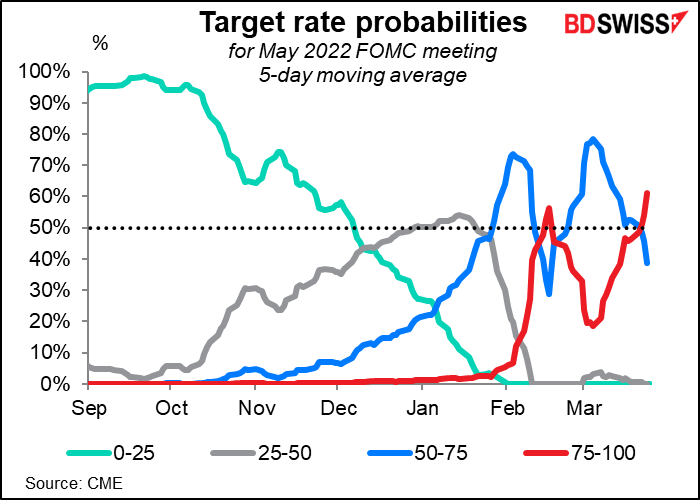 Note though that JPY recovered somewhat (USD/JPY fell) this morning. The Bank of Japan refrained from intervening in the Japanese Government Bond (JGB) market this morning even as the yield on the benchmark 10-year surged 0.5 bps to an astonishing 0.235%. (Sorry for the sarcasm but when you’re dealing with JGBs the movements are quite small.) That may not seem like much but it’s the highest since January 2016. 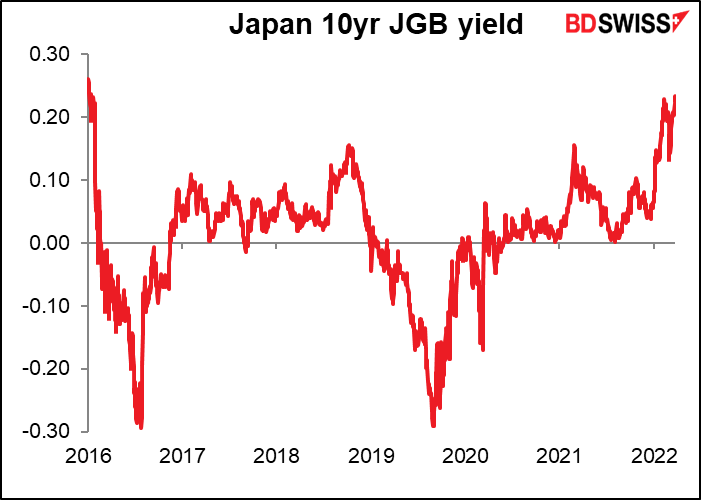 Believe it or not, the BoJ has been worried about the possible ill effects of a weaker yen on Japan’s economy as the country now runs a sizeable trade deficit. The next step for BoJ policy could be to widen or even get rid of its yield curve control (YCC) policy, which keeps the 10-year yield in a range of ±25 bps around 0.0%. The next BoJ meeting is April 28th. 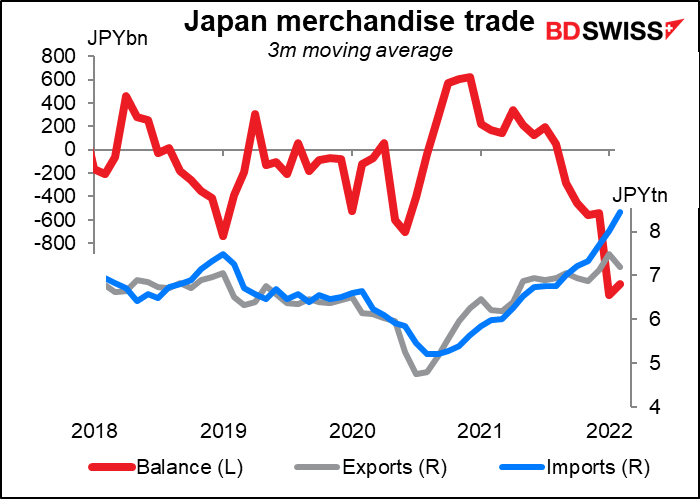 CHF was higher following yesterday’s Swiss National Bank (SNB) meeting. The SNB merely reiterated its usual boilerplate commentary about how it’s “willing to intervene in the foreign exchange market as necessary, in order to counter upward pressure on the Swiss franc.”

There was probably some disappointment that they didn’t take a stronger stance against CHF appreciation and emphasize the intervention, hence some trimming of CHF shorts. 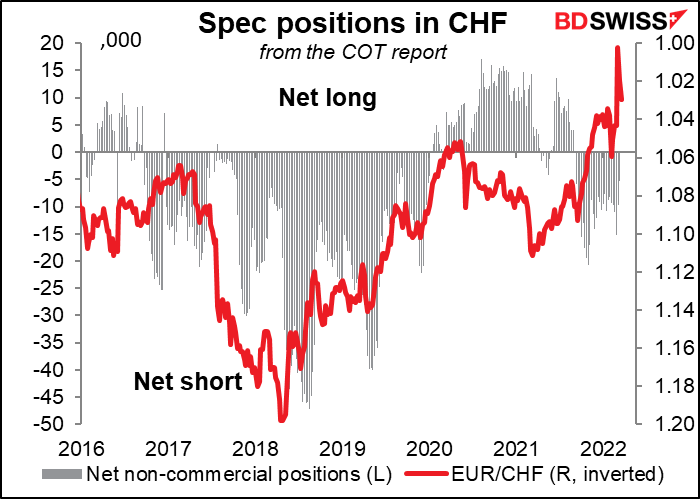 Meanwhile, the economic news was much better than expected. The preliminary purchasing managers’ indices (PMIs) beat estimates across the board. Based on these preliminary figures, I estimate that the developed market manufacturing PMI should fall only slightly to 56.2 from 56.3, vs the preliminary estimate of 54.5. 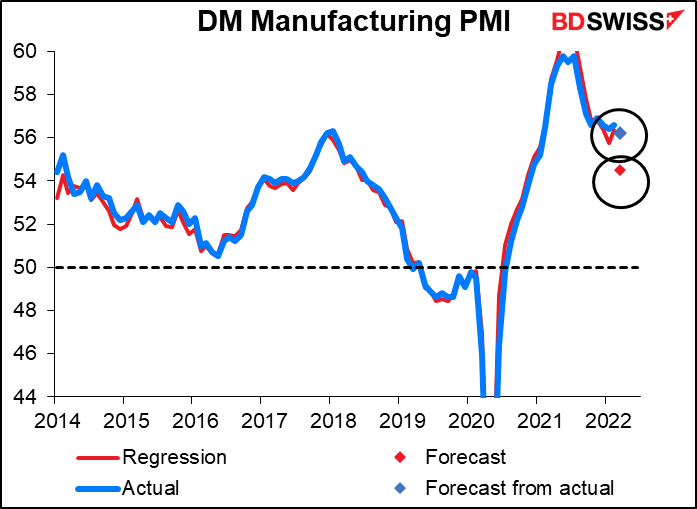 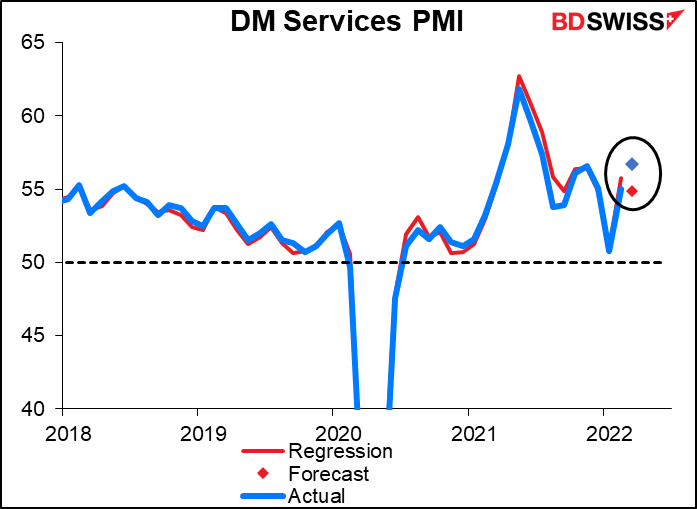 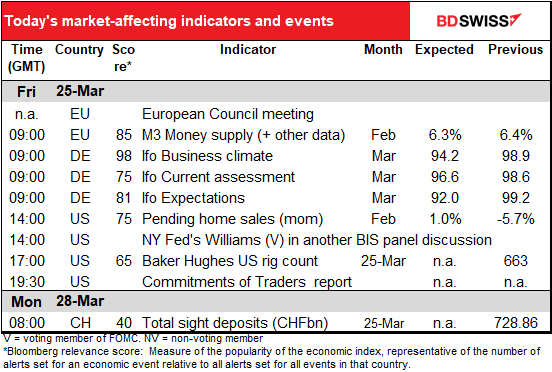 Today is the second day of the European Council (EC)  meeting. According to the Financial Times, the EU summit revolved around the question of how Europe should respond to Ukraine’s calls for more sanctions on Russia, particularly on energy imports. The discussion followed a familiar pattern: Poland and the Baltic states joined Ukraine’s calls for energy sanctions, while the rest of the bloc expressed wariness. “

In their conclusions, leaders said the bloc “remains ready to close loopholes and target actual and possible circumvention, as well as to move quickly with further co-ordinated robust sanctions on Russia and Belarus.” An example of loopholes they might close was yesterday’s G7 decision to target Russia’s ability to use its gold reserves as a way of blunting the impact of the sanctions regime on its economy.

As for further sanctions, the FT listed several other options under discussion:

UK retail sales are already out – see table above.

So now it’s EU money supply figures. These have a relatively high Bloomberg relevance score but I can’t believe anyone cares about M3 growth any more – certainly you don’t hear the European Central Bank making a big to-do about it at their meetings. I think the bank lending data are probably more important as the ECB wants to make sure that their policy stance is being transmitted to the real world. In that respect they can probably be pretty happy with what they’ve seen so far. Total lending has been rising at a higher and higher pace since May of last year. A further increase could add to the Governing Council’s confidence in normalizing monetary policy. That would be positive for EUR. 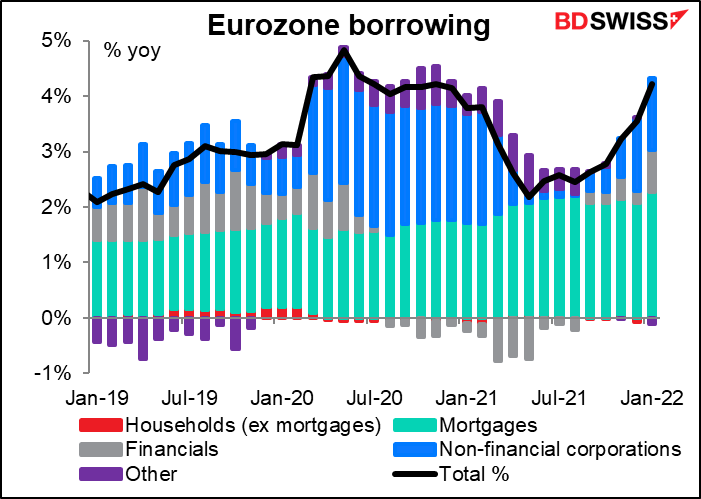 All the components of the Ifo survey are expected to decline. That’s no surprise given the decline in the purchasing managers’ indices (PMIs) for Germany during the month, which, while not as great as expected, were still lower nonetheless (composite PMI fell to 54.6 from 55.6, forecast was 53.8). 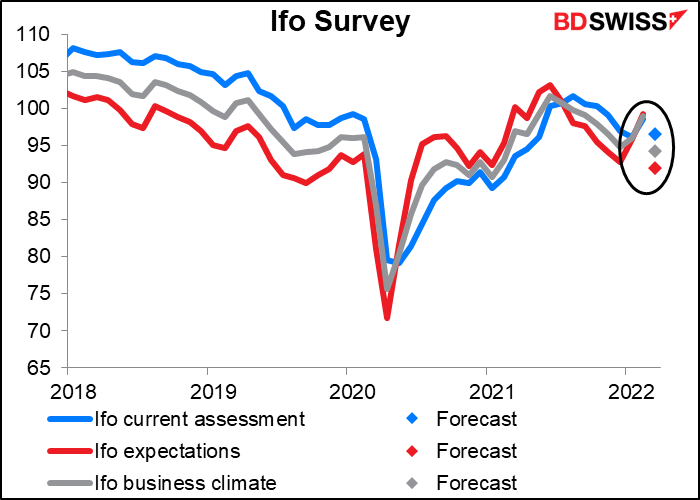 The expectations index (red line) is expected to fall much further than the current assessment (blue line), meaning that companies are looking for things to get worse ahead. Not a good sign but hardly unexpected given the surge in energy prices and the resurgence of COVID-19. 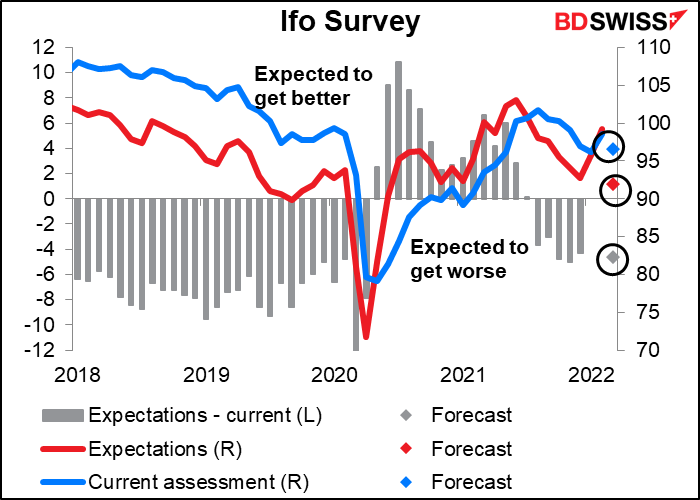 US pending home sales are forecast to be up 1.0% mom. This forecast seems a little optimistic when compared with the 7.2% decline in existing home sales and the 2.0% mom decline in new home sales. With mortgage rates up over 100 bps over the past year and now at their highest levels since 2019, it may be that housing is starting to slow a bit. 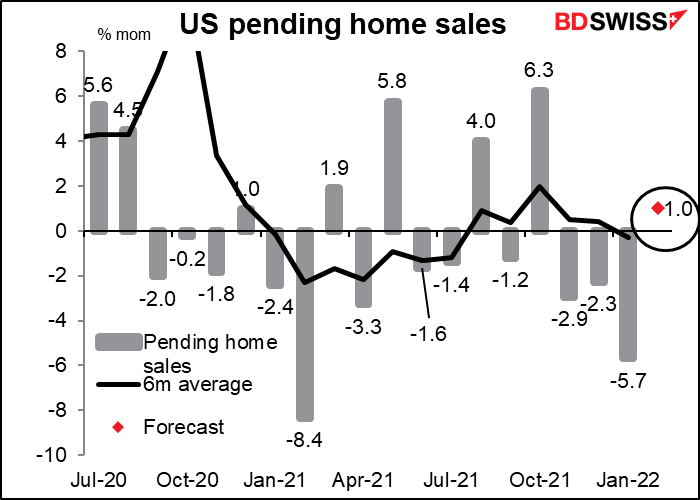 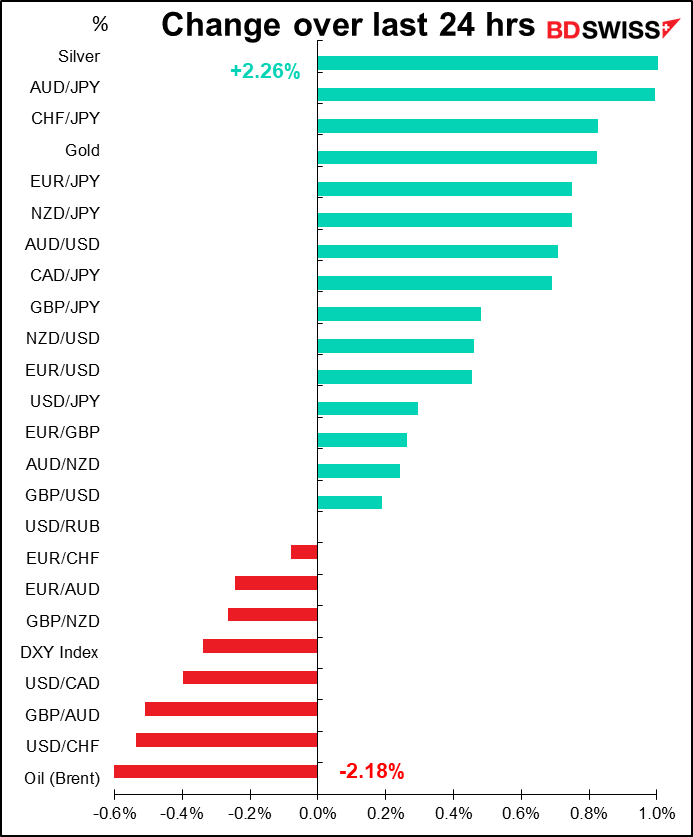