You are at:Home»Market Preview»EUR Up, USD Down as German inflation beats estimates; Canada GDP, ISM, JOLTs 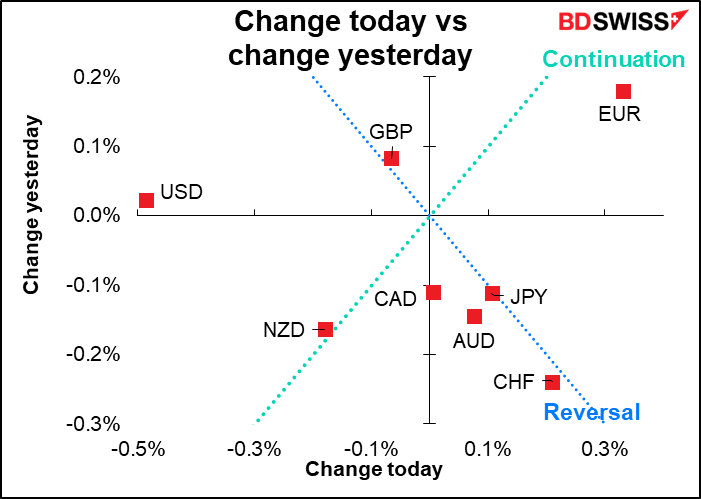 Expectations of central bank tightening continue to dominate the markets. EUR/USD moved higher yesterday after German inflation beat estimates, rising 5.1% yoy vs 4.3% yoy expected (5.7% previous). This encouraged the market to bring forward estimates of when the European Central Bank (ECB) would start to raise interest rates and how far they’re raise them after that. We’ll learn more on this subject on Thursday when the ECB Governing Council meets and they can guide us about what they’re thinking. 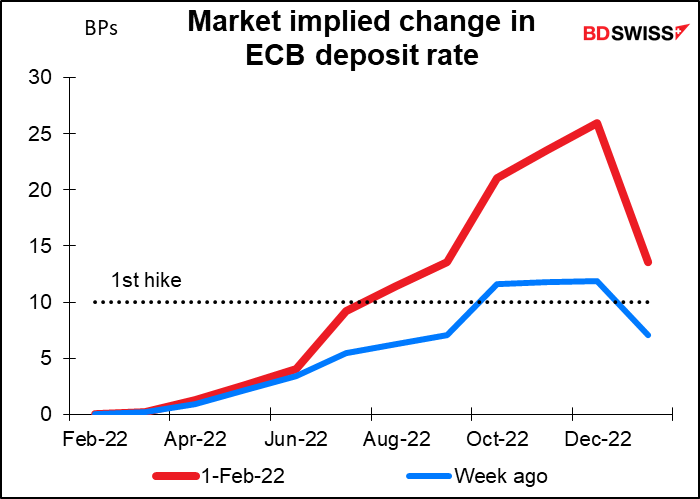 Rising expectations about rate hikes pushed bond yields higher in Europe. Yields on 10yr German Bunds for example were up +5.5bps to close slightly above zero for the first time since May 2019, at 0.01%.Yields on French and UK bonds similarly rose. The major outperformer were Italian BTPs (buono del Tesoro poliennale, or Treasury bonds), which rose only +1.2bps rise after Sergio Mattarella was re-appointed President, thereby allowing Mario Draghi to continue as Prime Minister. 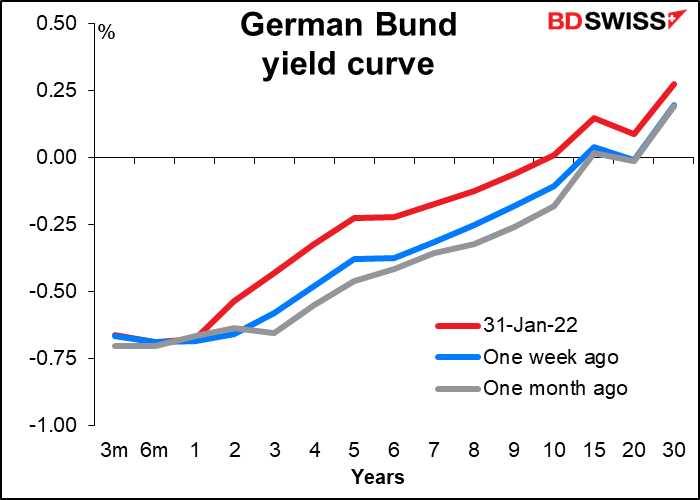 EUR/USD rose even though the fed funds futures market for the first time priced in 5 full rate hikes this year, although by the close it had fallen back slightly to 4.94 hikes. It was only two weeks ago that futures first priced in 4 hikes this year!

Thoughts of higher interest rates didn’t stop the US stock market yesterday, though. The S&P 500 was up 1.9% and the NASDAQ jumped 3.4%. The indices rose steadily over the day. A small dip near the close simply brought in the buyers and both indices closed at the high for the day. The S&P 500 is being indicated down about a point this morning, i.e. steady.

Sue Grey’s report into the fun at Ten Downing Street was published. It was damning in typical British understated terms (“some of the behaviour surrounding these gatherings is difficult to justify” = translation: this is outrageous! What were these idiots thinking?), but the report was more significant for what it couldn’t say because so much of the investigation is now in the hands of the police. I’m amazed that as the noose closes ever tighter around UK PM Boorish Johnson’s neck, the FX market doesn’t react at all and GBP remains steady. In most countries potential political instability would cause the currency to weaken. My guess is that traders assume (as I do) that any replacement would be better.

Also it’s a vote of confidence in the independence of the Bank of England. The market now expects five rate hikes from the BoE this year, up by one rate hike in just a week. That, and not the shuffling of the deck chairs on top, is what the market is focusing on. 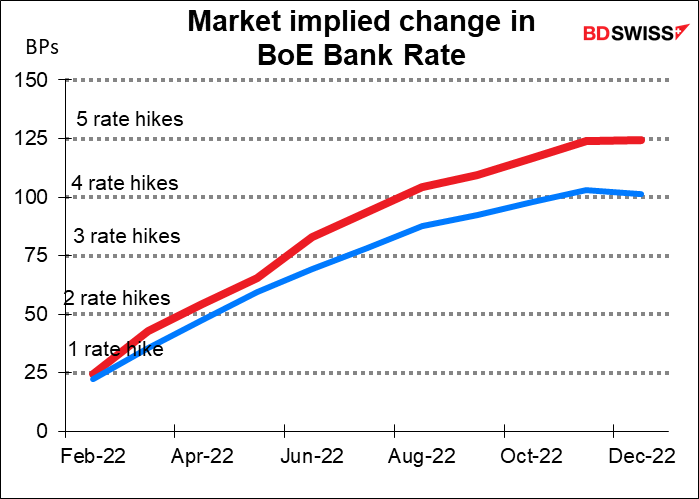 The Reserve Bank of Australia (RBA) met overnight and held rates steady, as was unanimously expected. It announced it would end its AUD 4bn-a-week bond purchases this month, as I expected. However in other respects the decision was more dovish than I expected. They said that “Ceasing purchases under the bond purchase program does not imply a near-term increase in interest rates” and reiterated that they “will not increase the cash rate until actual inflation is sustainably within the 2 to 3 per cent target range.”

You can decide for yourself if you think inflation is “sustainably” within the target range. The headline figure has been above it since Q2 last year, while the core measures have been within it since Q3 last year. 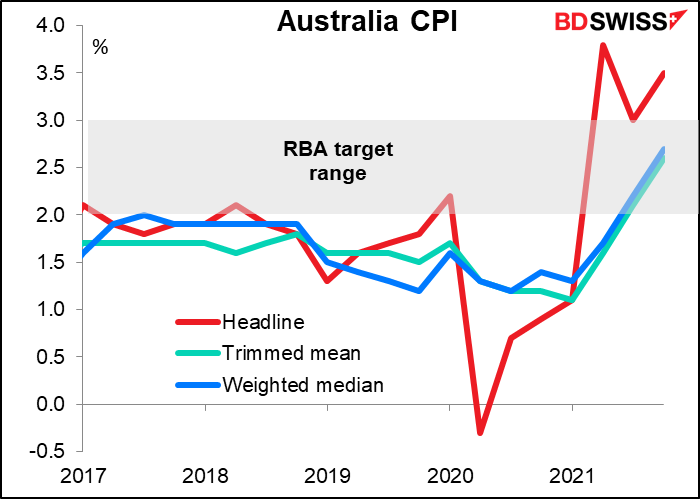 The RBA rejected that line of thinking, though. “While inflation has picked up, it is too early to conclude that it is sustainably within the target band. There are uncertainties about how persistent the pick-up in inflation will be as supply-side problems are resolved,” they said. They also repeated their concern about growth in wages, which surprised me.

The next big dates for AUD then are Feb. 23rd, when the 4Q wage/price index is released, and April 27th, when the 1st quarter CPI will be released. I still think the RBA will have to change its tune eventually, but until then its stance is likely to be negative for AUD> 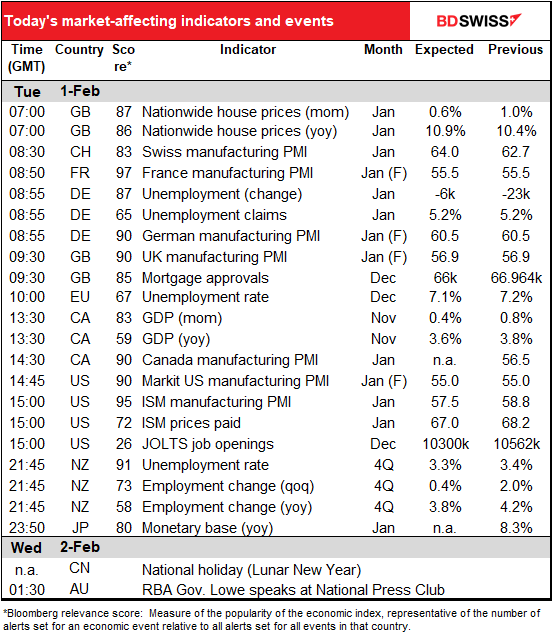 It’s a new month today and with it come the manufacturing purchasing managers’ indices (PMIs), including the final versions for those lucky countries that have preliminary ones. Looking at the preliminary versions of these, most were in the “decelerating expansion” quadrant, i.e. they were still above the 50 “boom-or-bust” line but not as far above as in December. Understandable as omicron took its toll. The two standout exceptions were Germany, where both service-and manufacturing-sector growth accelerated, and hapless Japan, where the service sector, never very robust since the beginning of the pandemic, fell back into contraction. Odd because Japan has had shockingly little in the way of lockdown, but it’s been a consistent story since Day 1. Meanwhile, the US Institute of Supply Management (ISM) version of this manufacturing PMI will come out later today in the US. It’s expected to decline by 1.3 points, less than the 2.7-point decline seen in the Markit version of the index. The dreaded prices paid index is expected to come down a similar 1.2 points, which isn’t much considering how high it is to begin with. In short, it should show that the US economy is continuing to expand at a healthy pace and prices are still rising – boosting the case for Fed tightening. USD+ Tucked in amongst the PMIs are the German unemployment data for January. It’s not likely to knock anyone’s socks off. The unemployment rate is forecast to be unchanged while the number of unemployed is expected to be down marginally. I’d say it’s a good figure given the increased stringencies imposed during the month, but probably not enough to move EUR either way. Eurozone unemployment, which comes out a few hours later, is for December, not January. It’s expected to decline marginally. If the forecast is correct, the unemployment rate in the Eurozone will have come back down to the record low level before the pandemic (data back to April 1998). We don’t have participation rate data yet, but according to the World Bank data, 2020 saw the highest participation rate on record for the Eurozone (80.97). So the employment picture in Europe is looking pretty good, at least relative to the past. 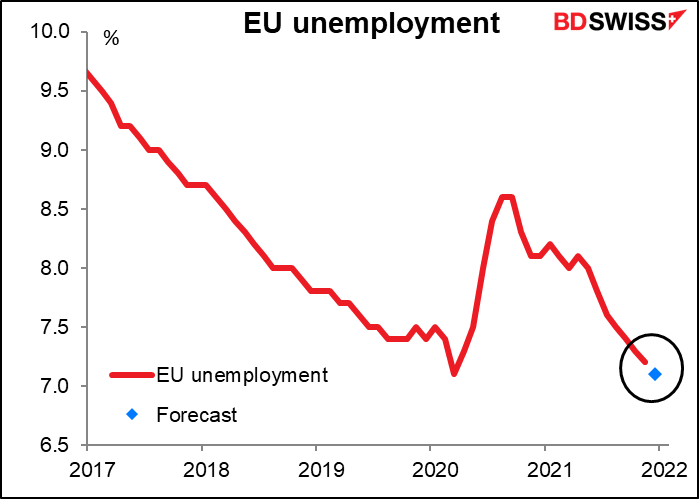 UK mortgage approvals are expected to be down slightly at 66k. Funny thing, they were expected to be 66k last month too. Maybe economists just resubmitted the same forecasts? It looks reasonable anyway. 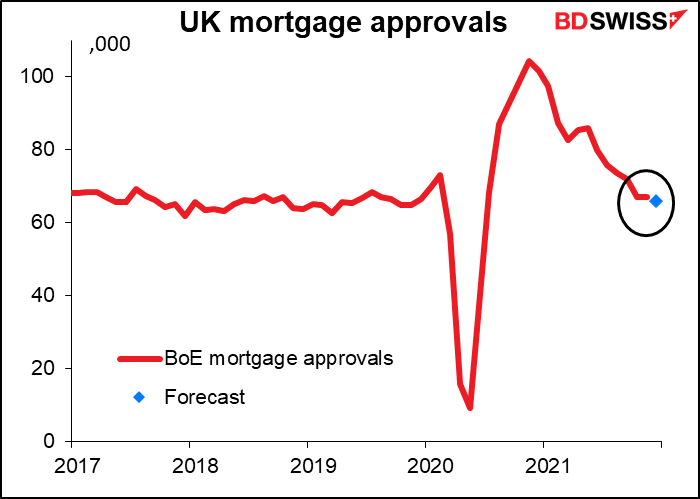 Canada’s monthly GDP for November is supposed to be up modestly. The industry-level data suggests that some of the sectors hit by the pandemic recovered, such as accommodation/food services and arts/entertainment, while wholesale trade, manufacturing, and construction also benefitted, while output in mining, quarrying, and oil & gas offset the gains somewhat. 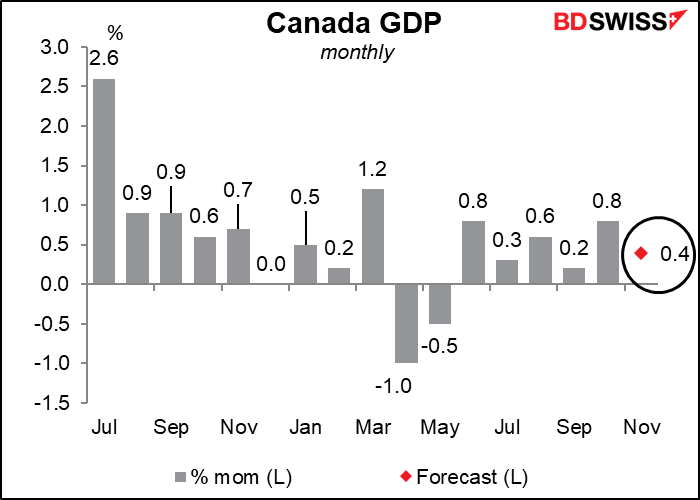 Even so, that should be enough to push Canadian GDP back up over the immediate pre-pandemic line, an achievement not to be sniffed at. This may help prod the Bank of Canada into tightening policy. CAD+ 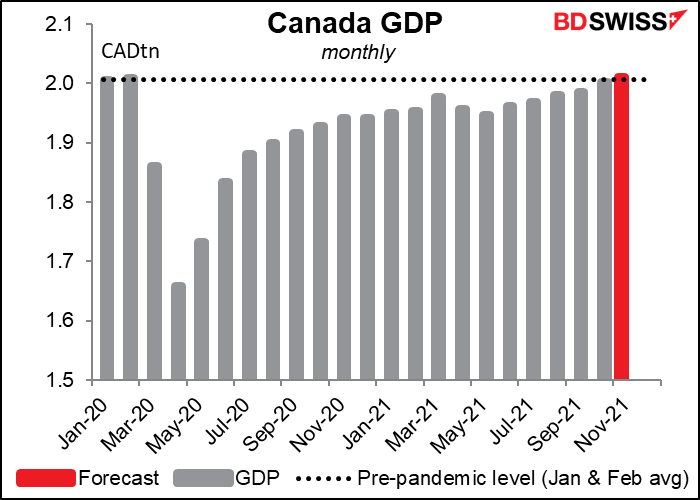 The Job Offers and Labor Turnover Survey (JOLTS) program is expected to show a modest decline in new jobs but still a pretty high level, much higher than before the pandemic. There’s no forecast for the quit rate, which was at a record high 3% last month. 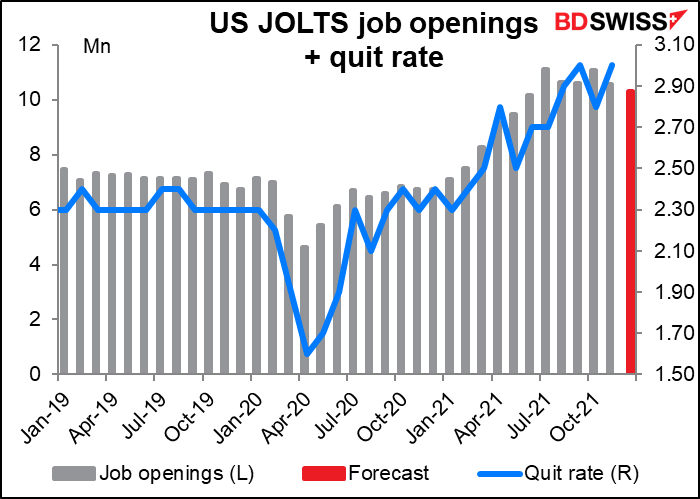 Given the continued fall in the number of unemployed persons, the job-openings-to-unemployed ratio is forecast to rise higher to 1.63 vs 1.55. This should just confirm to the FOMC that “labor market conditions are consistent with maximum employment in the sense of the highest level of employment that is consistent with price stability,” as Fed Chair Powell put it in his press conference. 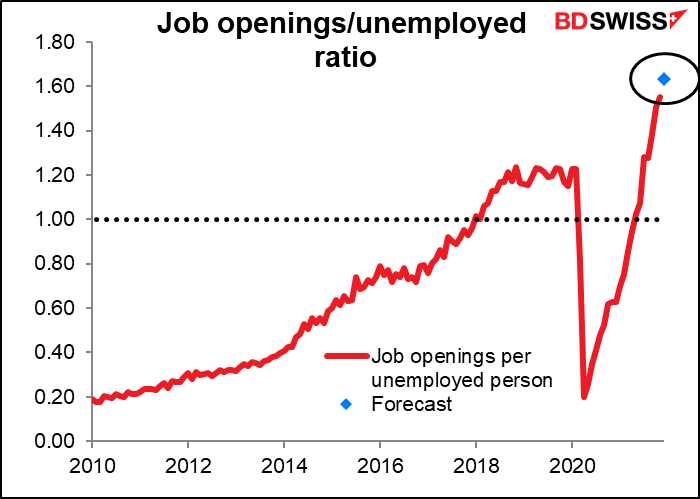 I think it’s worth quoting at length what he said on this topic, because it’s clear he’s referring to the JOLTS (so you can see why I make a fuss over this indicator every month even though it’s not a huge market-mover):

So, the thing about the labor market right now is that there are — there are many millions of more job openings than there are unemployed people. So you ask whether we can raise rates and move to a less accommodative and even tight financial conditions without hurting the labor market. I think there’s quite a bit of room to raise interest rates without threatening the labor market. This is, by so many measures, a historically tight labor market, record levels of job openings, of quits. Wages are moving up at the highest pace they have in decades. If you look at surveys of workers, they find jobs plentiful. Look at surveys of companies, they find workers scarce. And all of those readings are at levels really that we haven’t seen in a long time and, in some cases, ever. So, this is a very, very strong labor market. And my strong sense is that we can move rates up without having to, you know, severely undermine it.

When Powell referred to “jobs plentiful,” that’s a reference to the Conference Board’s monthly consumer sentiment survey, which has a question about whether jobs are “plentiful” and another about whether they’re “hard to get.” The “jobs plentiful” index hit a record high of 56.5 in September and has since come down a bit but remains at an unusually high 55.10. The “hard to get” index meanwhile is at 12.5, not far off the record low of 9.6. With 50 years of back data, these are convincing indicators of how today’s environment compares to the past. 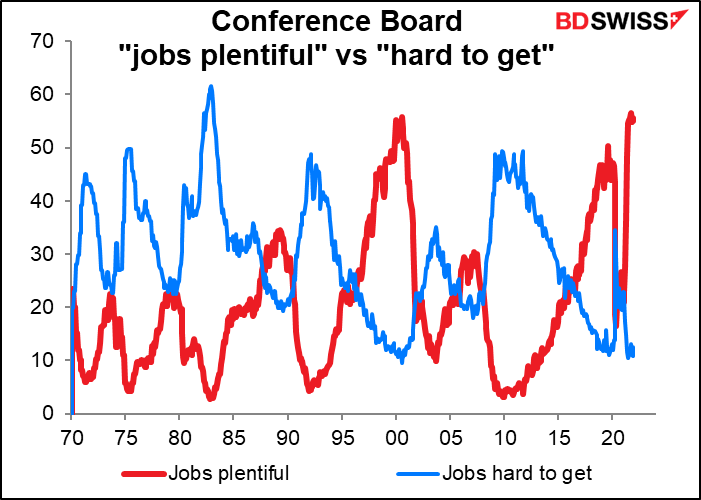 The difference between these two, “jobs plentiful” and “jobs hard to get,” is known as the Conference Board jobs diffusion index and has a good correlation with the unemployment rate. It hit a near-record high of 44.4 in August. (The record high was 46.2 in July 2000.) It’s since come down but only slightly, to 42.6. This is one of those indications that the job market is unusually strong right now. By the way, if you want to understand why the quit rate is at a record high and why companies have such a hard time hiring, watch this video. It takes place at a Walmart’s, which is the nation’s largest private-sector employer.

You might also be interested in this video about people who work full-time but can’t afford a place to live so they live in their cars. “Jobs plentiful” doesn’t say anything about the quality of those jobs or whether they pay a living wage. The average Walmart employee for example makes $24k a year, which is not a lot of money in a country where the average rent for an apartment is $1,124 a month. . There are an estimated 14,500 Walmart employees receiving food stamps, the US government program for food for the poor.

Speaking of jobs, New Zealand reports its employment data overnight. Employment is expected to rise and the unemployment rate fall for the fifth consecutive quarter. 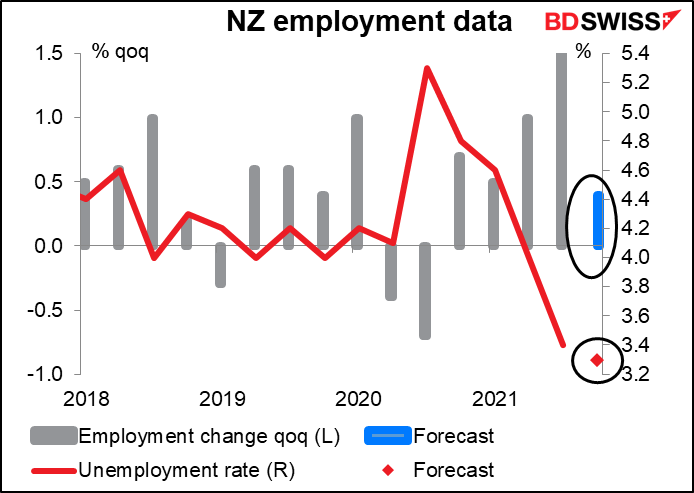 I would say that this figure might encourage the Reserve Bank of New Zealand to tighten policy, but they’ve already hiked twice so far and have made it clear that they intend to hike further. Still, this news may well be positive for NZD. 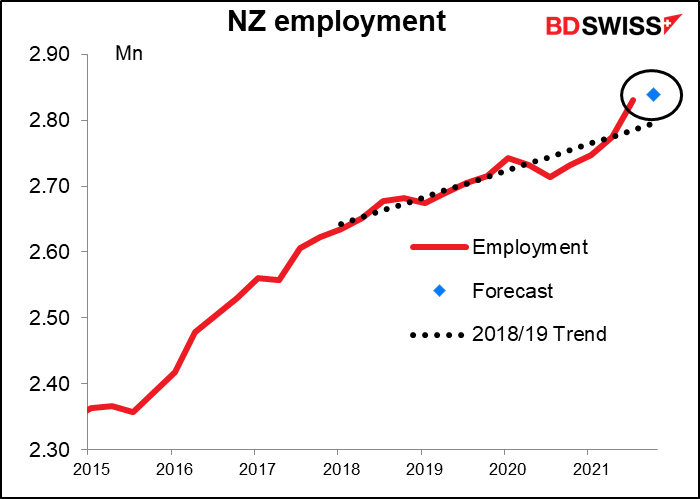 Today’s speech by Reserve Bank of Australia Gov. Lowe will be his first comments after yesterday’s RBA meeting and so of particular interest.