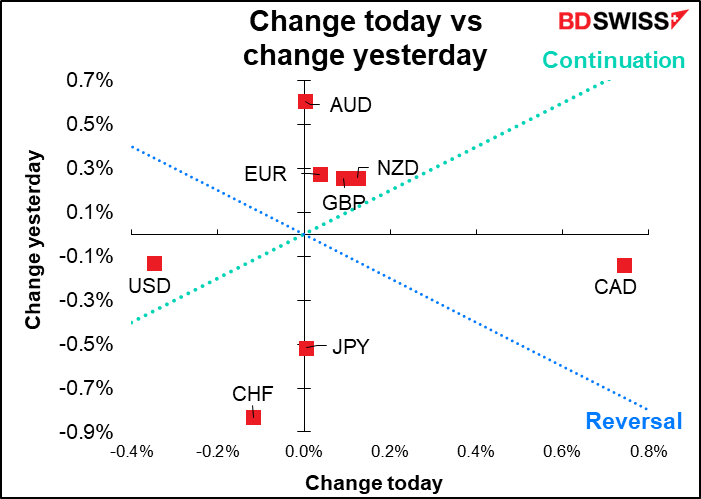 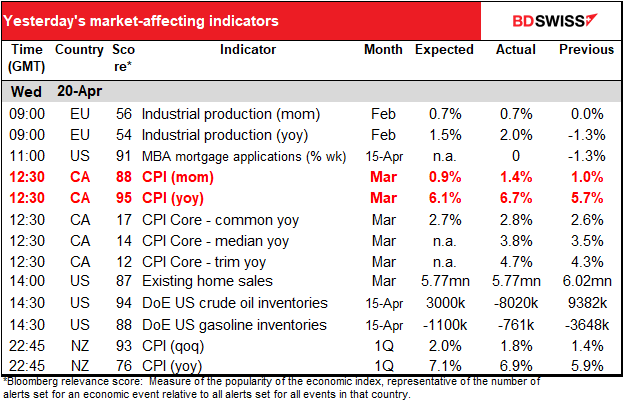 Rarely have I seen one currency so dominate the day’s activity! Most currencies were little changed – the trade-weighted indices (TWIs) for most were ±0.1% more or less. Only two exceptions:  CAD and USD. And I should point out that USD is 60% of the CAD TWI, while CAD is 25% of the USD TWI, so those movements are going to be mirror images of each other to some degree.

Nor do we have to go searching very far for the reason behind the move. Yesterday’s release of Canada’s consumer price index (CPI) was expected to show rising inflation but nothing like what happened! The year-on-year rate of increase jumped from 5.7% to 6.7% — a tremendous leap. 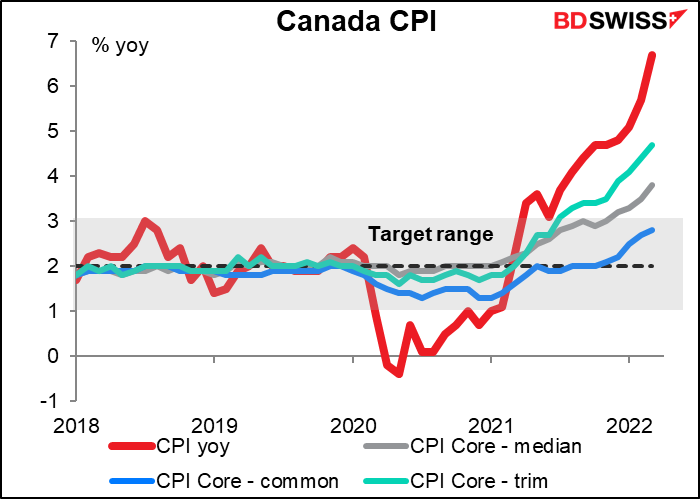 Although the FX market wasn’t particularly volatile yesterday, amazing things were going on in the bond markets. Bond yields, which jumped on Tuesday, reversed course and fell across the globe, at least at the long end of the market.

This may be because of several reasons:

Notably though fed funds futures further out moved in the opposite direction, implying that the market thinks that by bringing the tightening forward there will be less need for more tightening in the future – hence the fall in longer-dated bond yields. 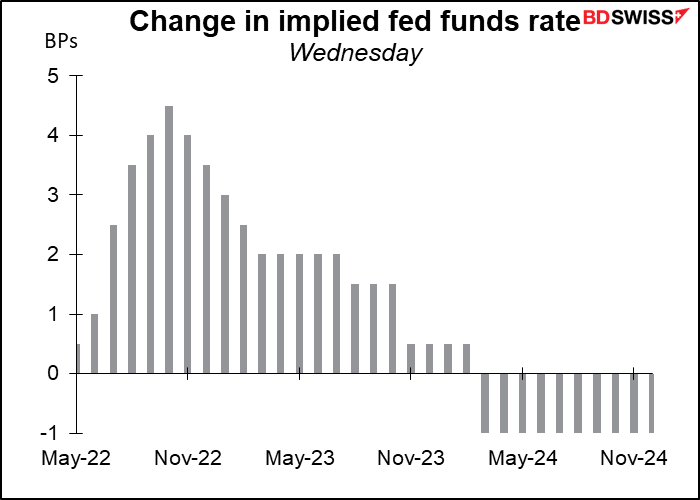 The increase in estimates of what the Fed will do this year is in line with what Fed speakers have been saying recently. We heard from two relatively dovish speakers yesterday: San Francisco President Daly (NV) and Chicago President Evans (NV). Both said they wanted to see rates at a neutral level by the end of the year (which the Committee estimates is around 2.4%). The market is already pricing this in – and more. The fed funds futures peak (prices bottom) at 3.32% in July 2024. We heard similar things from Europe yesterday too. Latvian central bank governor Kazaks told Bloomberg that “A rate increase in July is possible, and I have no reason to disagree with what markets are pricing for the second half of the year.” The market is currently pricing in that the ECB’s deposit rate will return to positive territory (+0.10%) by December, which implies multiple rate hikes.

Bundesbank President Nagel agreed that there could be a rate hike “at the beginning of the third quarter” (= July?) if asset purchases were finished at the end of Q2. Currently the market is pricing in only 16 bps of tightening by the July meeting, i.e. they’re not certain of a 25 bps hike then. This means a July rate hike (assuming it would be 25 bps) would be a surprise for the markets. One thing not on the schedule below:  US Treasury Secretary Yellen and Japan Finance Minister Suzuki will meet today on the sidelines of the G20 meeting. The recent decline in the yen will be the major topic of discussion. On Tuesday, Suzuki said at a press conference, “We must take appropriate action (in response to the yen’s rapid weakening) while closely communicating with financial authorities of the United States and others based on G-7 and other agreements.”

However, I fail to see what Japan can do to strengthen the yen so long as the Bank of Japan persists in running a monetary policy opposite to that of virtually every other central bank on earth. With Japanese 10-year yields capped at 0.25% thanks to the Bank of Japan’s Yield Curve Control (YCC) policy, the spread between Japanese and other countries’ yields is inevitably going to rise as interest rates elsewhere rise. That’s inevitably going to cause the yen to weaken. Intervention could slow the yen’s decline but not stop it. 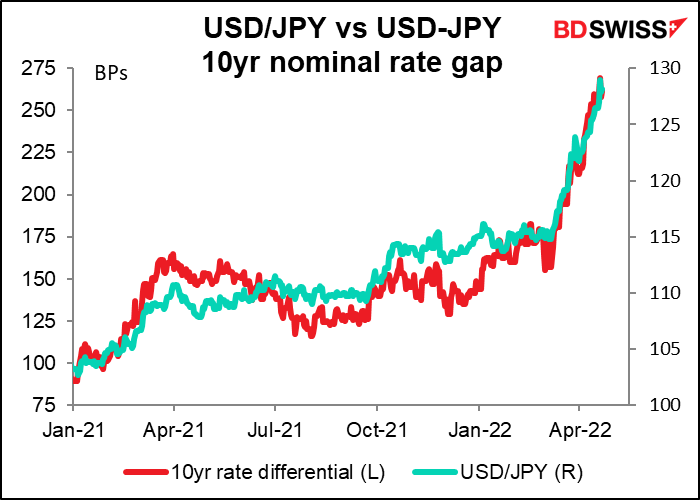 Nothing exciting during the European morning, except maybe the final figure for the Eurozone aggregate consumer price index (CPI) at 09:00 GMT.

Once the US wakes up, we get the Philadelphia Fed business outlook index. Last week’s Empire State manufacturing index blew all the forecasts out of the water – it was 24.60, up from -11.80. The market had been expecting a mere 1.0. Usually economists predict the two will move toward convergence – the one that’s below the other is normally expected to rise, the higher one is expected to fall – but this time the market forecast would have the Philly Fed index falling below where the Empire State index jumped to. That’s of course entirely possible as there’s no law saying one has to be higher than the other. In any case a small decline like what’s predicted would suggest that the US economy is still in good shape, confirming the message from the Empire State index, and would normally be expected to be positive for the dollar.

US initial jobless claims are no longer especially interesting. They’ve settled down to “up a bit, down a bit” with no particular signal. This year (red line) is coming in much like former years, indeed at the low end of former years. Nothing much to see here. 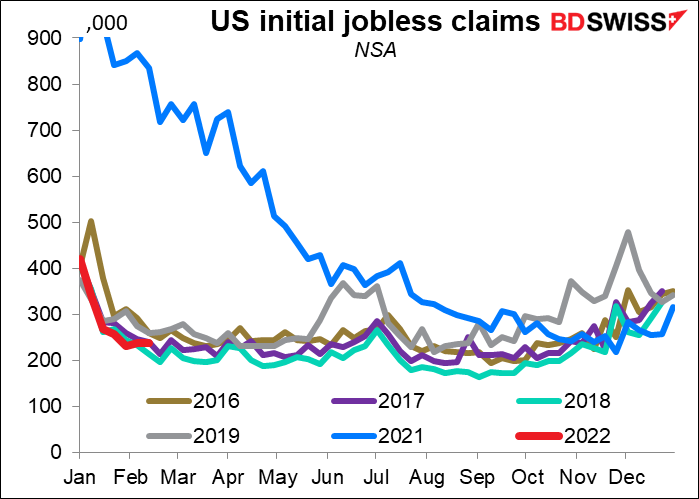 The US leading index (LEI) is expected to be unchanged from the previous month. The six-month moving average has been trending lower for some time now, as one might expect as the “bounce-back” from the pandemic fades and life gets back to some semblance of “normal,” at least for those of us who are still alive. The Atlanta Fed’s GDPNow estimate for Q1 GDP is 1.1% qoq SAAR, down from 6.9% in Q4 2021. (The Bloomberg market consensus forecast is 1.0% qoq SAAR).

A 0.3% mom increase would be pretty good, I should think. The Conference Board noted that the 0.3% mom increase in February “do(es) not reflect the full impact of the Russian invasion of Ukraine, which could lower the trajectory for the US LEI and signal slower-than-anticipated economic growth in the first half of the year.” Steady growth under these conditions would be a sign of underlying resilience in the US economy = USD+. 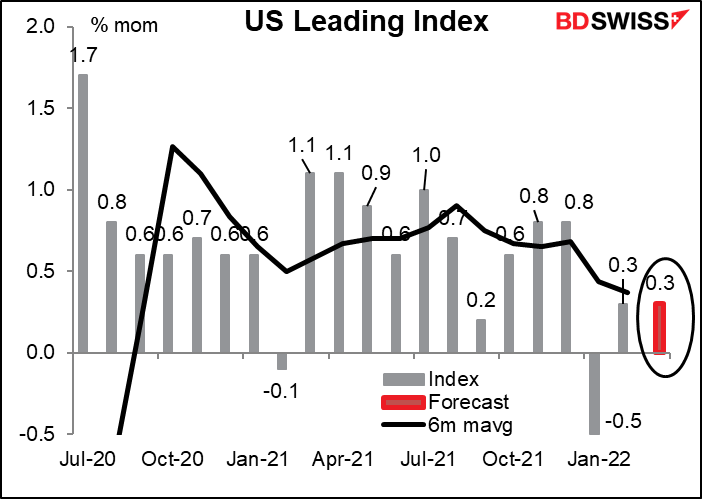 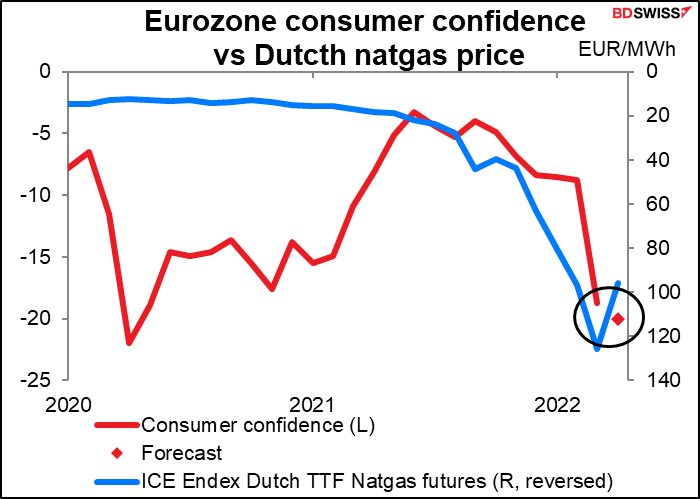 Finally, there’s likely to be some excitement from Washington. Bank of England Gov. Bailey will be speaking at the Peterson Institute’s “Macro Week.” You can hear him here if you’re so inclined. A little bit later, Fed Chair Powell and ECB President Lagarde will participate in an IMF seminar event, Debate on the Global Economy, along with three other luminaries. 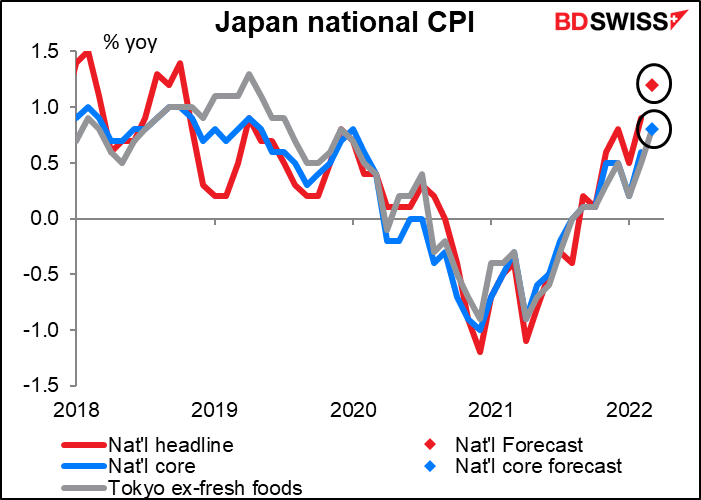 In any case, the market reaction to the figure is abysmal, in contrast to most other countries, where the currency usually shows a pretty good correlation to the inflation figures. This is probably because a) the Tokyo CPI comes out two weeks earlier and is a good estimate of what the national CPI is likely to be, and b) no one expects inflation to be anywhere near high enough for the Bank of Japan to change policy anyway. I believe the latter is the more important point, because the Tokyo CPI also fails to cause a correlated change in the currency. 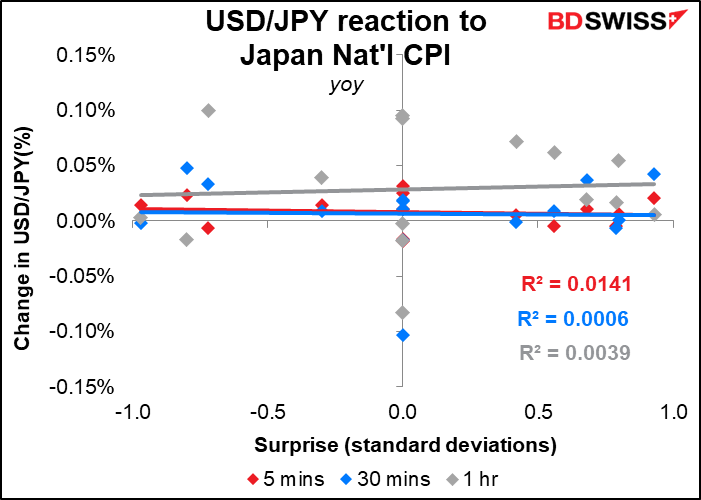 The Japanese CPI may be so extraordinarily low in part because of bad statistics. For example, rents, which account for 18.2% of the CPI, do not take into account the deterioration of buildings over time (which the US calculation does). It also includes a lot of older buildings that are not competitive but are a lot cheaper. Autos, with a 2.2% weight, only include new cars, not used cars, the price of which went up an estimated 24% in 2021. Prices for food are not adjusted for size, a trick that many food companies have been using: shrinking the size of their cookies or whatever and including fewer in a package. Many Japanese companies use this technique: instead of raising the price of their existing product, they add some new features, change the appearance a bit and then launch it as a “new” product or service at a new (read: higher) price. (The Japanese absolutely love new products!) Since only a few brands and a few items are surveyed, such changes do not get reflected in the CPI.

Be that as it may, what we have is what policy is decided on.

We’re all just waiting until next month, when the plunge in mobile phone charges a year ago drops out of the calculation, to see what happens then. Headline inflation will probably go over 2%. How will the Bank of Japan react to that? Tune in on May 19th to find out!

Then overnight we start the preliminary purchasing managers’ indices (PMIs) for the major industrial economies. As usual, there’s no forecasts for Japan. The figures are expected to be lower almost across the board, with only the US service-sector index forecast to show a small rise. German manufacturing and UK services are forecast to show particularly steep declines, although I’m not sure how significant that is in the case of the UK – even after the forecast 2.6-point decline in their service-sector PMI it would still be the highest of the group. PMIs don’t go up forever. The expected fall in German manufacturing PMI would be more significant as it would put Germany below the PMI for the EU as a whole, rather than above. 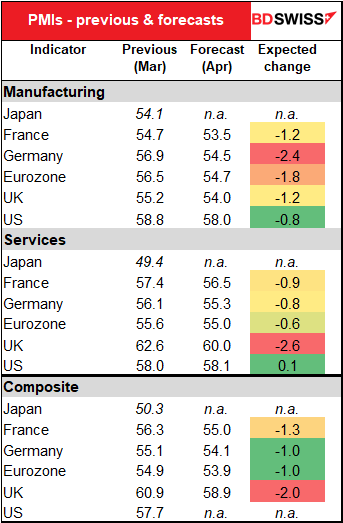 In the midst of all this we get the UK retail sales. They’re expected to fall on a mom basis, which is pretty bad when inflation was running at 1.1% mom during the month, which means that even if the volume of goods sold was unchanged, the value would’ve gone up 1.1% (more or less). The problem is probably a) sticker shock, and b) money that people previously would’ve spent on going to the pub and buying iPhones (not necessarily at the same time) they now have to spend heating their homes. Rising energy costs are likely to sap UK consumer spending for some time.