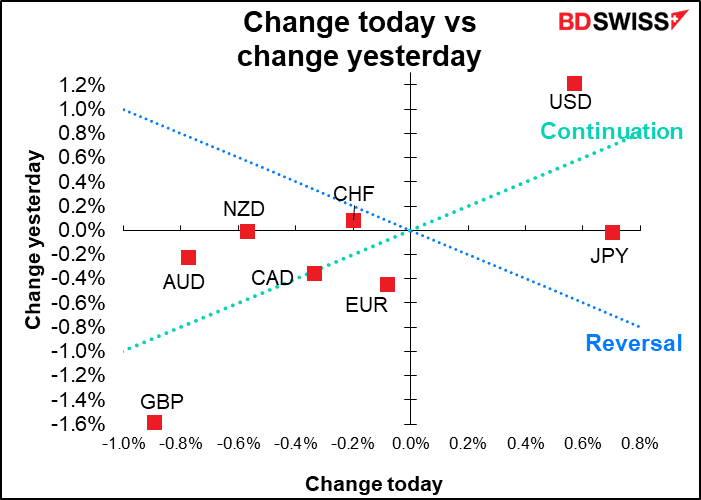 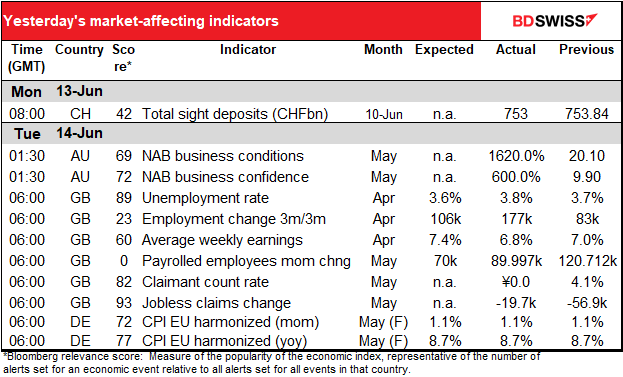 The sell-off continues. Friday’s shocking US consumer price index ( CPI) is still reverberating through the markets.

Some Wall Street economists were updating their calls for Friday’s meeting of the Federal Open Market Committee (FOMC), the rate-setting body of the US central bank. The consensus has been that they will hike 50 bps, as numerous Fed officials have said, but some economists revised their forecast to a 75 bps hike and a few were even considering whether the Fed may need to hike 100 bps. Against that background, a late-in-the-day headline from the Wall Street Journal’s Fed reporter suggesting that the Fed would consider hiking 75 bps was the last straw for the markets.

The market interpreted “consider” to mean “carry out.” 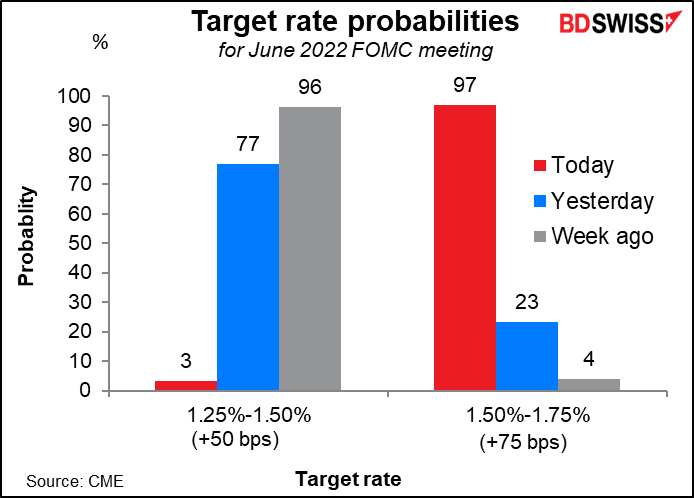 And increased their estimate of the terminal rate – the highest rate that the Fed would hike to – by 32 bps, or one rate hike and a chance of another. It’s now about 4.0%, well over the Fed’s estimate of the “neutral” rate – the rate at which monetary policy is neither a boost nor a drag on the economy — of 2.4%. 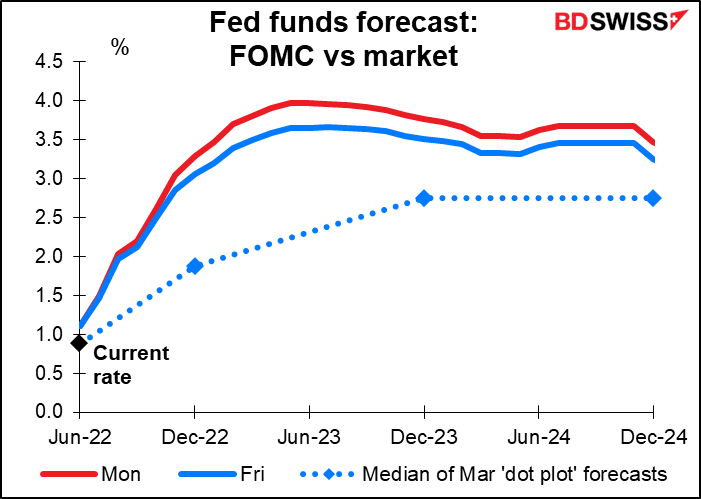 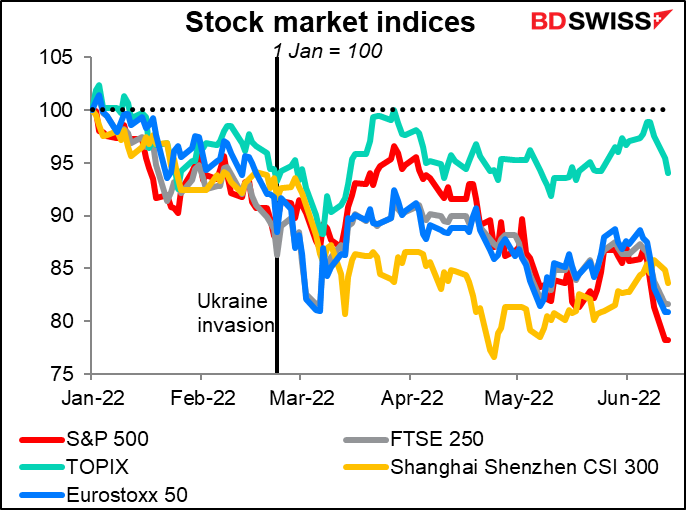 …while bond yields rose, especially at the short end of the yield curve as markets discounted more central bank tightening. US two-year yields have risen 31 bps so far this week, while German yields are up 18 bps. 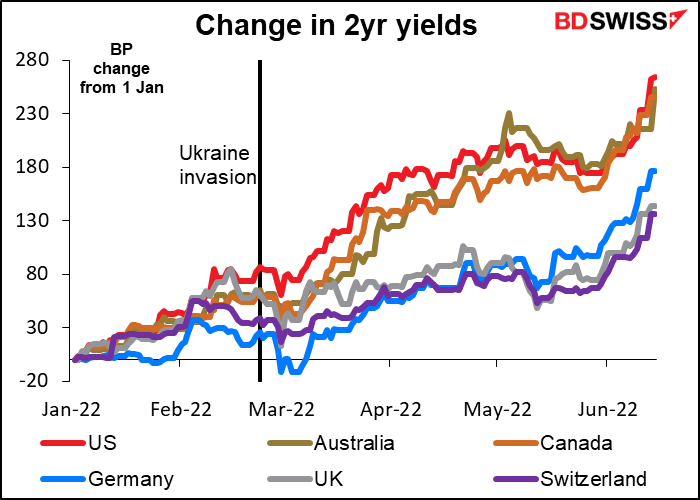 In this atmosphere, the safe-haven JPY recovered somewhat, aided by comments from Japanese officials hinting that they might intervene in the market. However, intervention is an empty threat so long as Japanese monetary policy remains as it is. The Bank of Japan Monday bought more than JPY 1.5tn of Japanese Government Bonds (JGBs) to defend its yield curve control target. It came in again on Tuesday, boosting its scheduled purchases of 5-10 year debt and then announcing an unscheduled operation to buy longer-dated bonds. 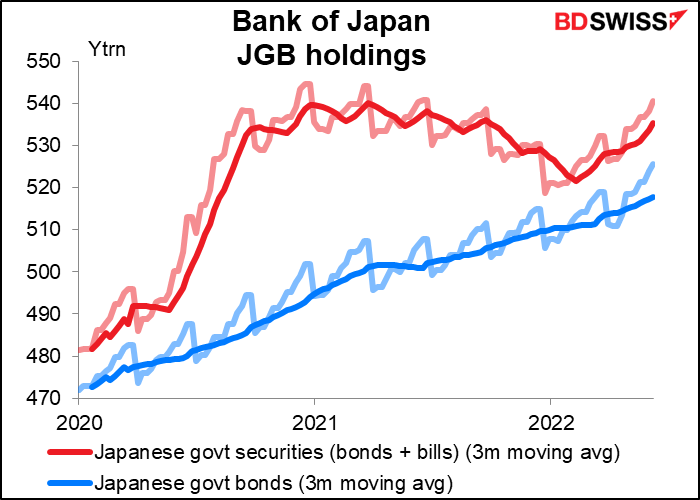 Given that every other central bank in the world (that I know of) is tightening policy, including stopping their quantitative easing programs and in some cases shrinking their balance sheets, this is a stand-out move. Official intervention to counter the move will not be credible so long as the Bank of Japan’s own policy is the reason why the yen is weakening. And indeed a Reuters report on Friday’s BoJ meeting said that “the BOJ is likely to maintain ultra-low interest rates on the view that hiking rates now would do more harm than good by cooling a fragile economy.” Such reports are usually leaked by insiders who want to prepare the markets ahead of time.

Meanwhile, GBP was the worst-performing currency for the second day in a row. Friday there didn’t seem to be any Britain-specific cause behind the move. Monday the big miss on April GDP, which fell 0.3% mom (vs +0.1% expected), added to the bearish sentiment for the currency This was the second consecutive monthly decline. Oddly enough the driving force was a fall in health output, which may be due to less testing for COVID-19. I would’ve thought that would be a good thing, but a fall in GDP is a fall in GDP regardless of why. Maybe PM Johnson should hire kids to go around breaking windows so that homeowners can go out and buy new windows and thereby boost GDP.

Adding to the currency’s woes, the Bill to “fix” the Northern Ireland Protocol unilaterally was introduced in Parliament on Monday amid controversy over whether the legislation will break international law. The EU said it will not renegotiate the protocol and that it will consider unfreezing an existing legal proceeding against the UK over breaches of the protocol and consider a new suit as well.

I think the market has GBP in its sights and I expect the currency to weaken further. 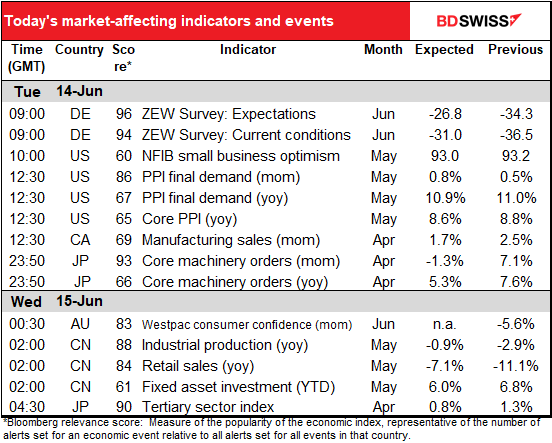 The day started out with UK employment data, which is given in the table at the top of this report.

Next up is the ZEW survey of economists, analysts, and other parasites on humanity who don’t produce anything except forecasts that prove to be utterly wrong but for which they usually suffer no penalty because no one does any better. This time around both the current conditions and expectations indices are expected to rise, with expectations forecast to rise 7.5 points and current conditions forecast to rise 5.5 points. In other words, the market forecasts that things are expected to get better at a slightly faster pace than they were last month. Of course this is a sentiment indicator not an indicator derived from people who actually make things or produce a service. However insofar as it is a sentiment indicator it would be bullish EUR. 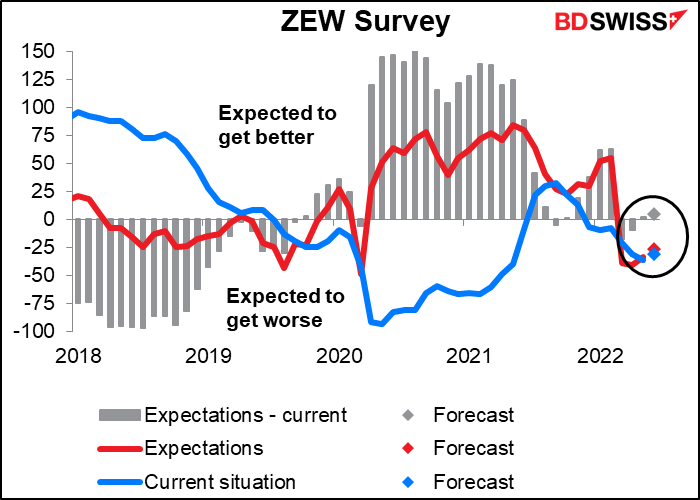 When trading this indicator you can pretty well ignore the current conditions index. The FX market moves largely on the expectations index. But it doesn’t seem to move all that much. 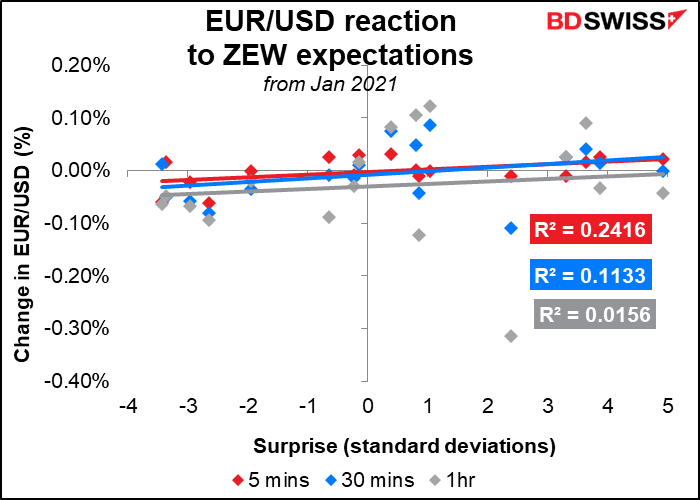 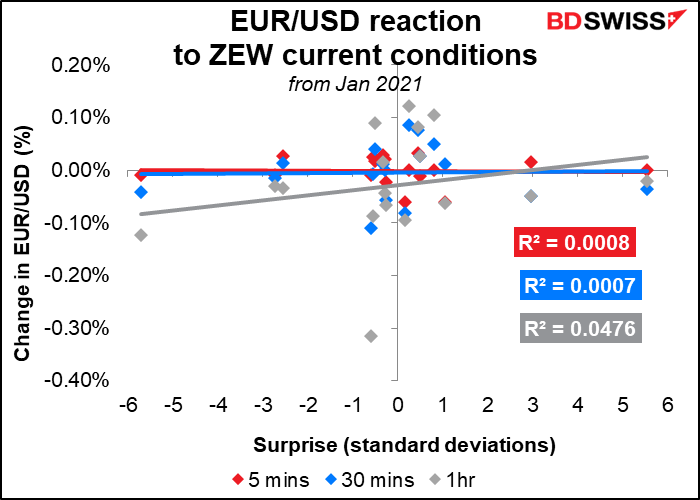 The rate of increase in the US producer price index (PPI) is expected to fall for the second month in a row. This is likely to be some relief after last week’s higher-than-expected US consumer price index for May, but of course the connection between the PPI and CPI isn’t that clear. See my explainer on this topic, The PPI and the CPI: what’s the connection? 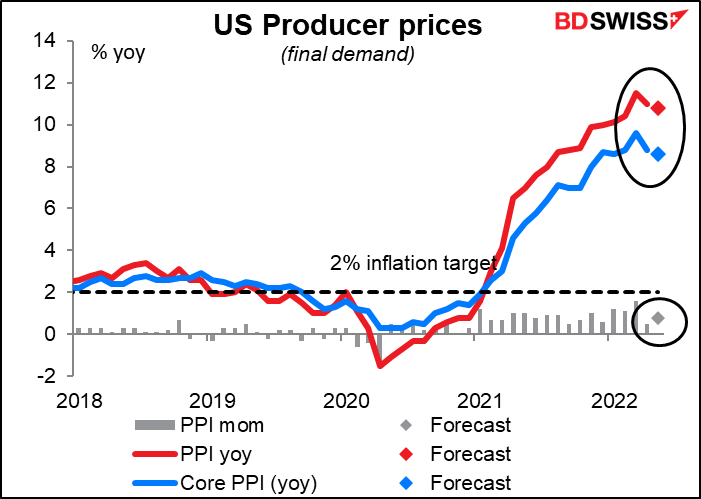 The dollar generally doesn’t react that much to this indicator, but with the recent focus on all things related to inflation, that could change. 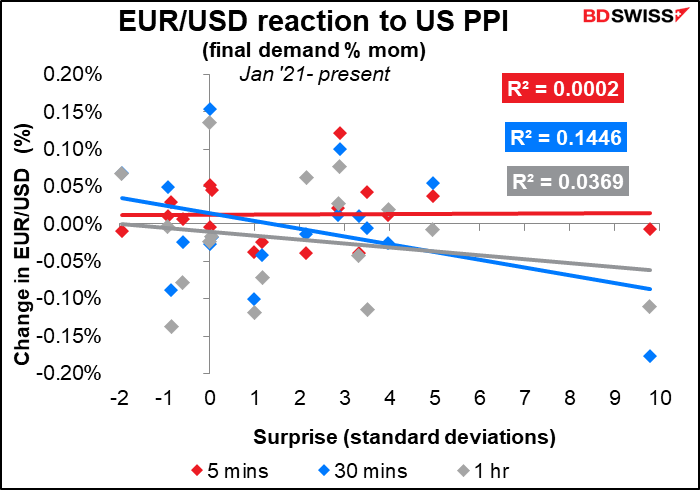 Canadian manufacturing sales are expected to be a bit below the recent trend of 2.6% mom but not by much. This would corroborate the Bank of Canada’s view that “Canadian economic activity is strong and the economy is clearly operating in excess demand” and support their view “that interest rates will need to rise further.” It’s therefore likely to be positive for CAD. 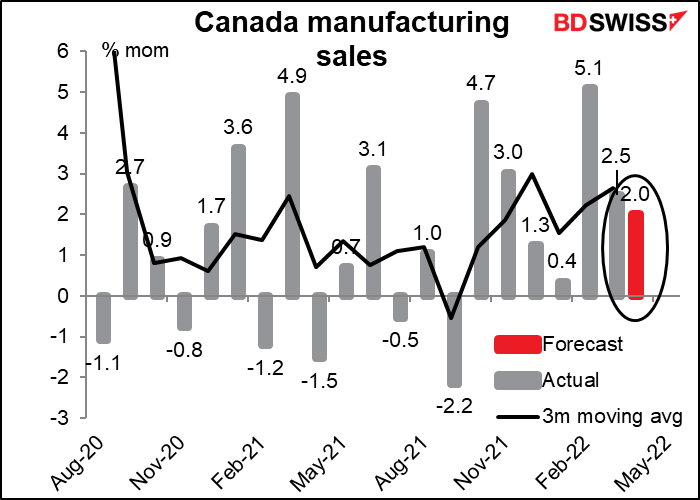 Then overnight we get what’s maybe my least favorite indicator, Japanese machinery orders. They’re closely watched (one of the highest Bloomberg relevance scores for any Japanese indicator) and yet don’t seem to trend at all as far as I can tell, so I’m usually at a loss to get much information out of them.

This month the market is expecting a decline as payback after the unusually large 7.1% mom gain in March (which was payback from the unusually large 9.8% mom decline in February). That would mean a further decline in the three-month moving average, so maybe we are seeing a trend here – and not a good one. Weakening machinery orders are not going to convince the Bank of Japan to change course. JPY- 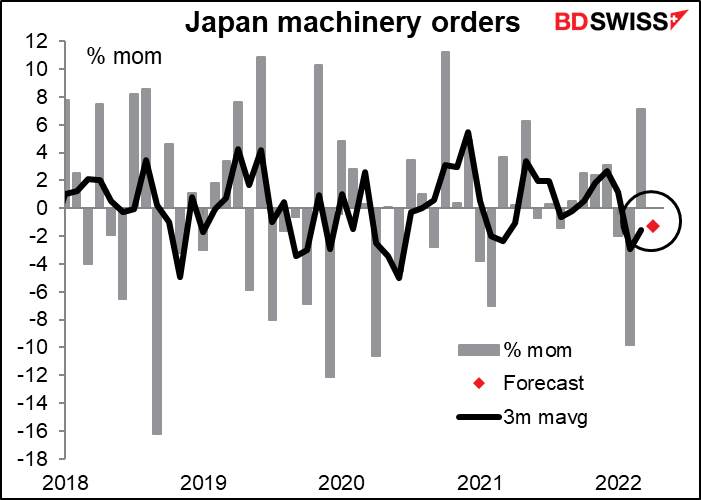 The market’s reaction to the data though seems odd. The lines are sloping upward, meaning that USD/JPY tends to rise (JPY tends to weaken) when the figure beats estimates. That’s the opposite of what one might expect. 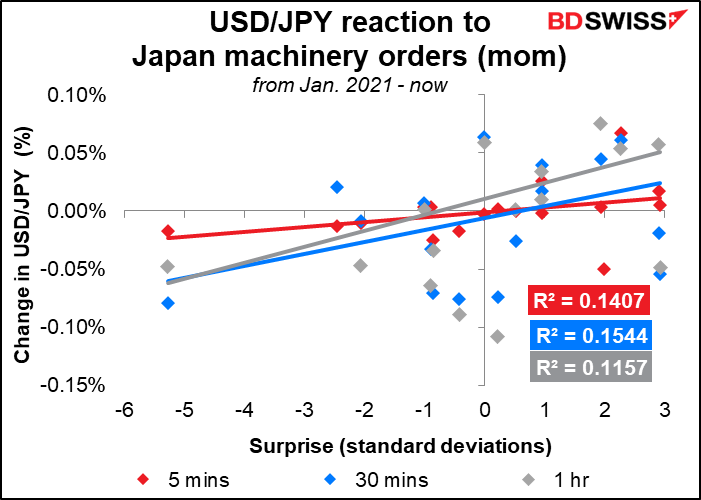 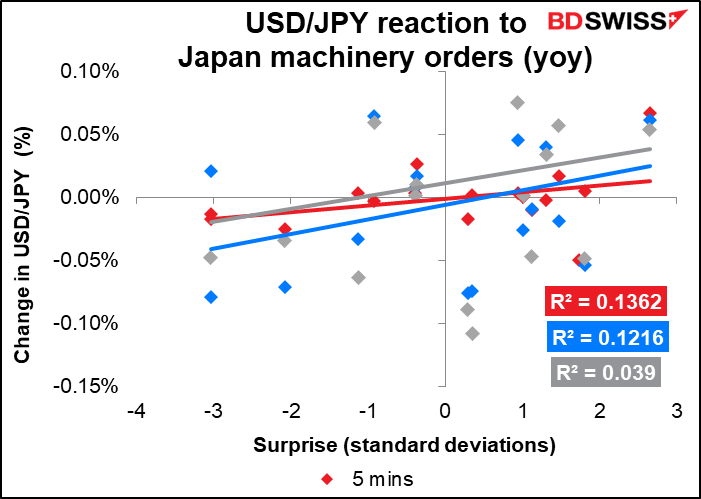 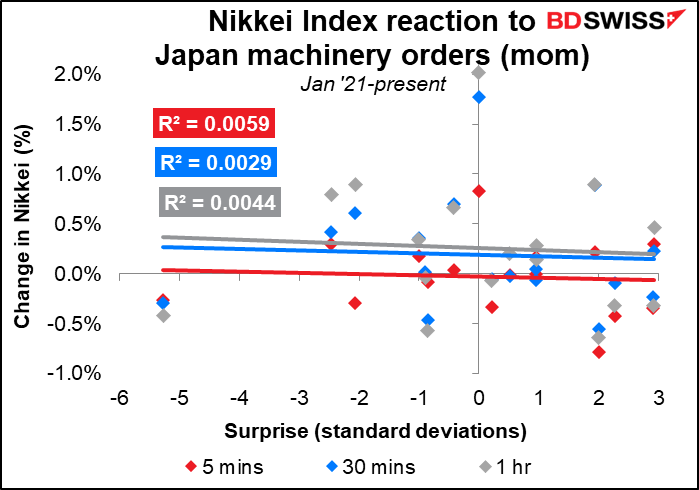 There’s no forecast for Australia’s Westpac consumer confidence index but here’s a graph anyway so you can see the trend. No extra charge! 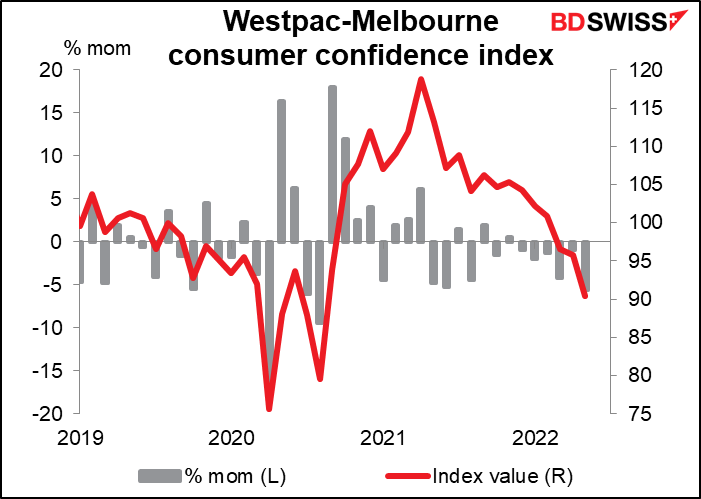 China’s monthly trio of retail sales, industrial production, and fixed asset investment (FAI) are expected to show a yoy decline in both sales and production, but not as big a decline as in the previous month. FAI on the other hand is expected to slow. 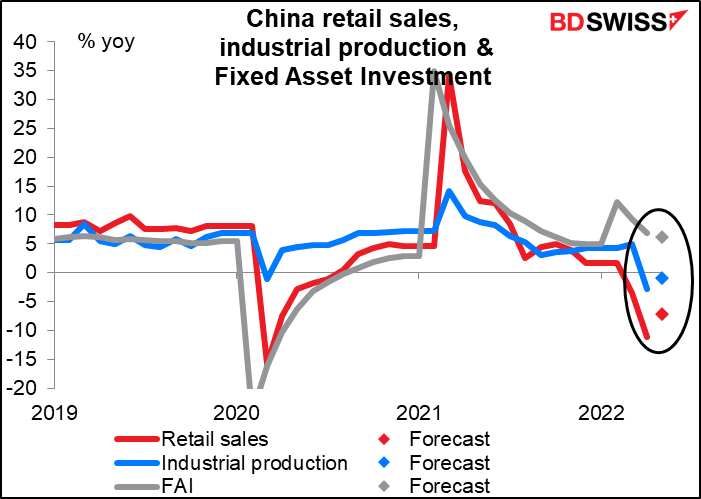 Finally, Japan’s tertiary sector index also has a fairly high Bloomberg relevance score, which is bizarre since it comes out after the service-sector PMI and the Eco Watcher’s Survey, which basically tell the same story. Since the service-sector PMI perked up 1.3 points during this period and the Eco Watcher’s survey +2.6 pionts, it’s probably that the tertiary sector index would produce a proportionate pop. 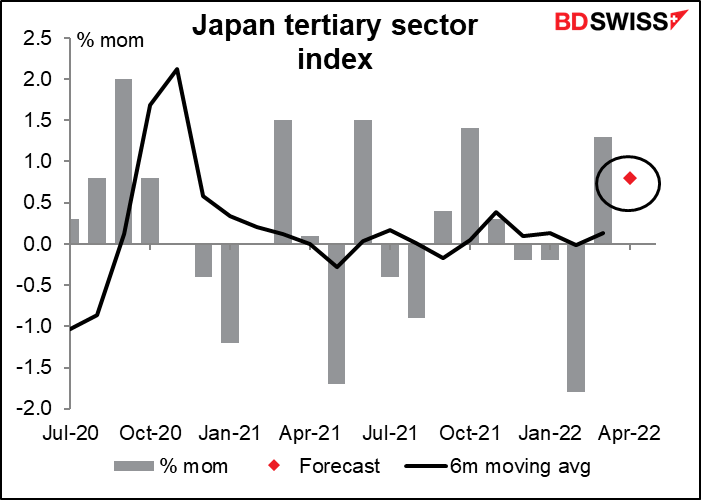 Even if I think this is a redundant indicator, the market does seem to watch it. It even shows the expected impact on USD/JPY (a better-than-expected figure causes JPY to strengthen), at least at the one-hour horizon. 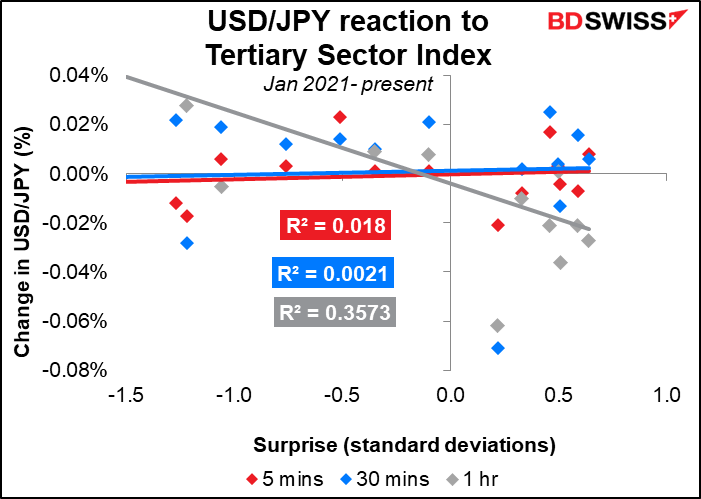 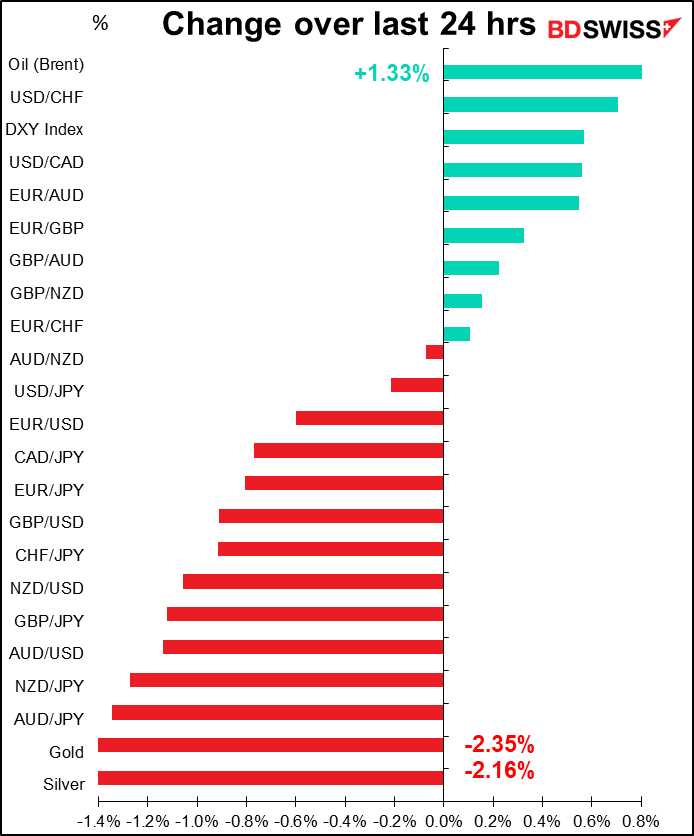