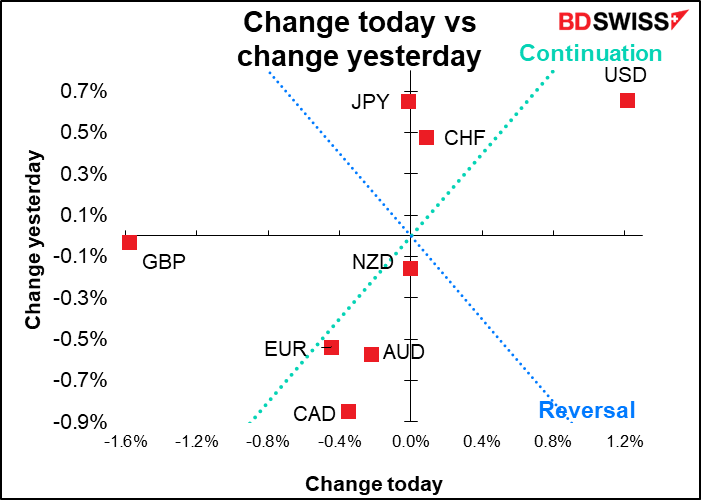 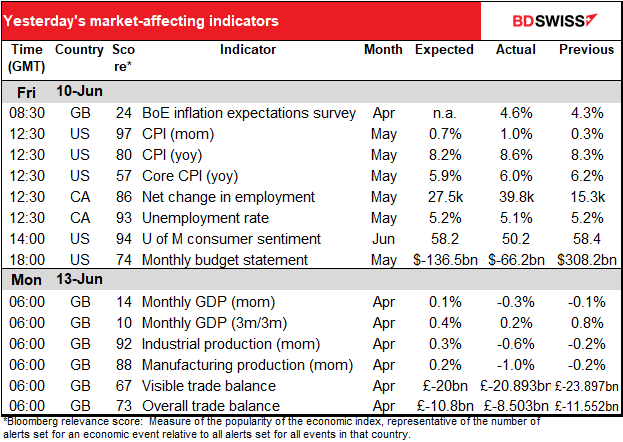 The shocking rise in the US consumer price index (CPI) on Friday set the tone for the markets. Last week (blue bars) the market was predicting a 50 bps hike in September, possibly only 25 bps, but that’s now shifted (red bars) to either 50 bps or maybe even 75 bps. In fact the market now sees a  small (10%) chance that the fed funds rate will hit 2.75%-3.0% that month, which would probably be discounting a 75 bps hike in June, another in July, and a 50 bps hike in September. Of course a month ago (grey bars) the consensus was firmly on 25 bps. 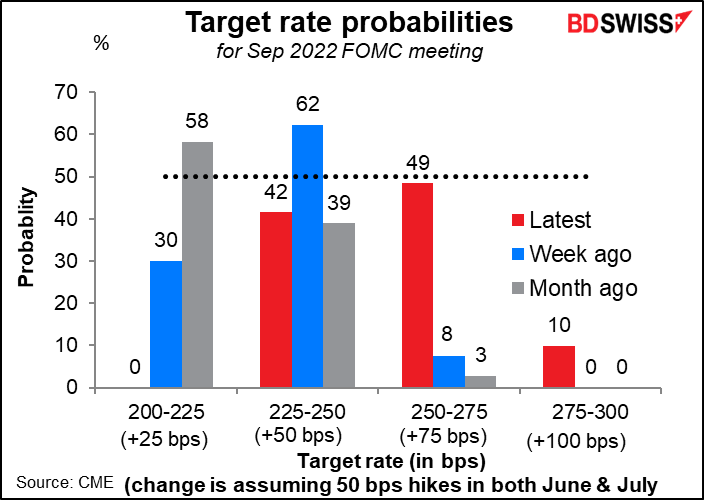 Higher inflation sparked fears of increased tightening and sent interest rates skyrocketing at both ends of the yield curve around the world.

It’s kind of surprising though that inflation expectations didn’t rise that much despite the over-the-top US CPI print, which was above even the highest of the 69 economists’ forecasts on Bloomberg.

That didn’t help the pound any, though. On the contrary it was the worst-performing currency Friday. I couldn’t find any specific UK-related reason for the move. It looks like it was just following the general “risk-off” trend, as exemplified by the NASDAQ index.

In any case, given this morning’s disappointing UK GDP figure for April, I think a weaker pound was on the cards in any case.

Elsewhere, several Japanese officials Friday expressed concern about the yen, e.g. Bank of Japan Gov. Kuroda said “The recent rapid depreciation of the yen is undesirable and negative for the economy” while Chief Cabinet Secretary Matsuno reiterated the government’s “concern” about the currency’s movement. The Ministry of Finance’s top currency guy, Masato Kanda, said “Appropriate actions we can take include a wide variety of options,” which is a hint at market intervention. However history has shown that market intervention won’t work unless the BoJ changes course so that would just be providing better entry points for people to short the currency.

French elections:  It looks as if President Macron could lose his majority in the National Assembly. Projections are that his party is likely to win between 262 and 301 seats, vs 289 necessary for a majority. The second-largest group is likely to be Nupes, an alliance of left-wing parties led by Jean-Luc Melenchon, which is projected to get 164-208 seats. The far-right National Rally, led by Marine Le Pen, is likely to get only 17-36 seats despite her being the #2 candidate for President. The conservative Republicans party and its allies are forecast to get at least 40 seats.

The problem is that without a majority it might be difficult for Macron to get his reform agenda through. For example, he wants to raise the retirement age and change (= reduce) unemployment benefits, while Melenchon wants to lower it to 60.

The risk of a minority government in France may be a small negative for EUR.

Speculators slightly reduced their long USD position in the latest week. Most of this was through trimming CHF, CAD, JPY, and GBP shorts. On the other hand they slightly decreased their long EUR position. 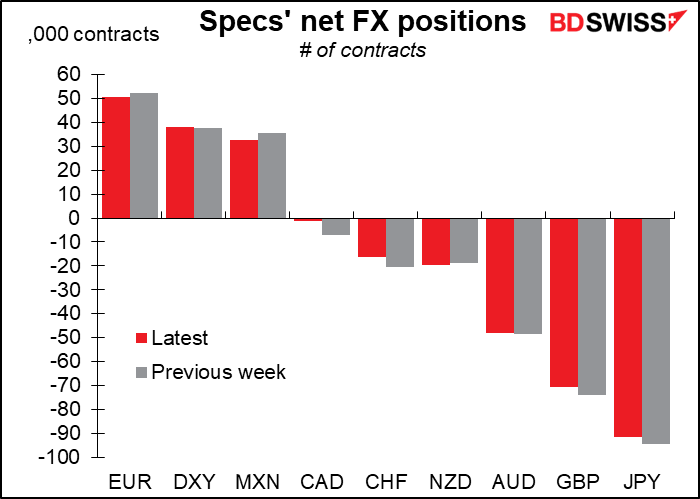 Hedge funds cut their MXN longs while increasing their AUD and CAD shorts. They trimmed JPY shorts a bit. Meanwhile, they flipped from slightly short EUR to slightly long. 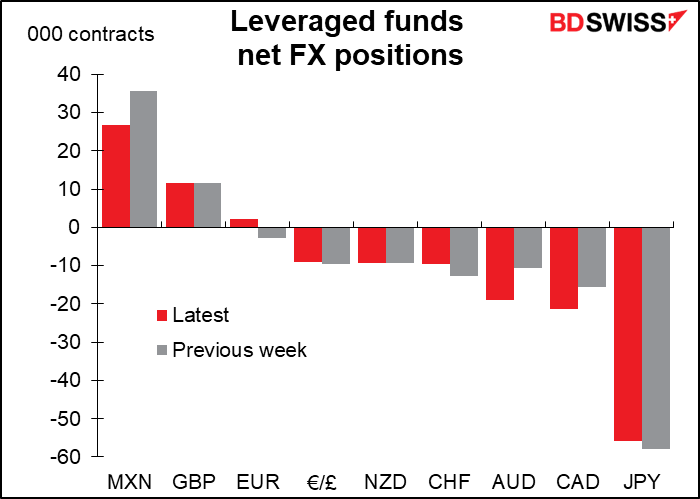 Retail was also more bullish EUR, but unlike hedge funds were more bullish CAD, too. On the other hand they were more bearish JPY and CHF. They trimmed GBP shorts and flipped from short AUD to long AUD. 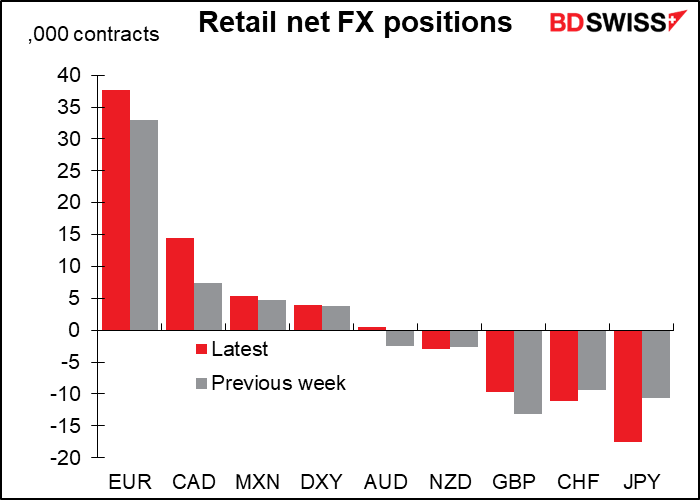 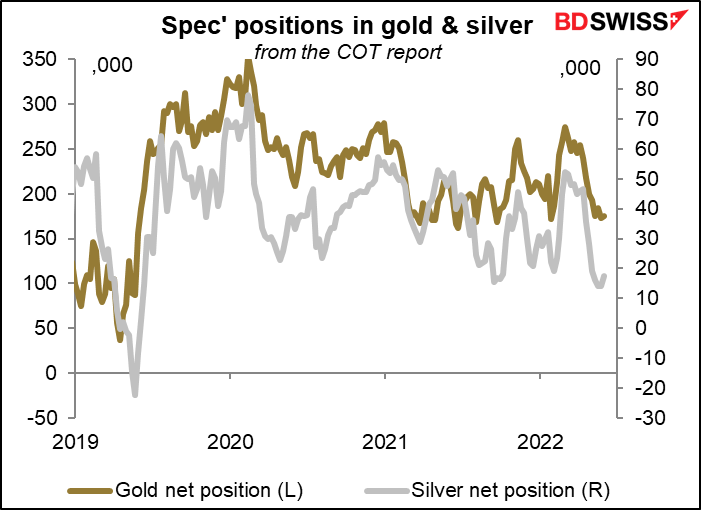 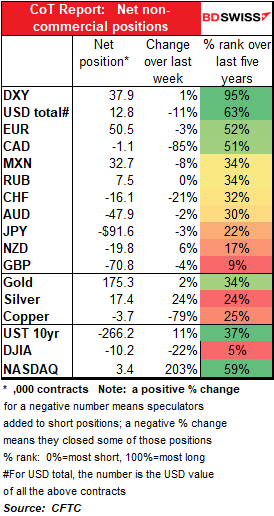 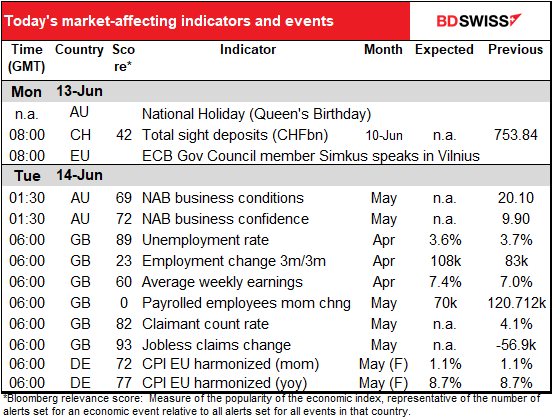 The schedule today is shockingly empty. I thought maybe there were some big holidays today but no, except in Australia (and Cyprus!) no holidays that I can find. Just few major announcements.

The only major indicators out today are already out – the UK “short-term indicator day.” The results are in the table at the top of this comment.

Swiss sight deposits have fallen two weeks in a row as EUR/CHF has risen without any such “supernatural” support. Will it be a third consecutive week? Then it’s just watch the charts I guess until the Asian day starts.

There are no forecasts for the National Australia Bank (NAB) business confidence indices, but here’s a graph anyway so you can see the trend. 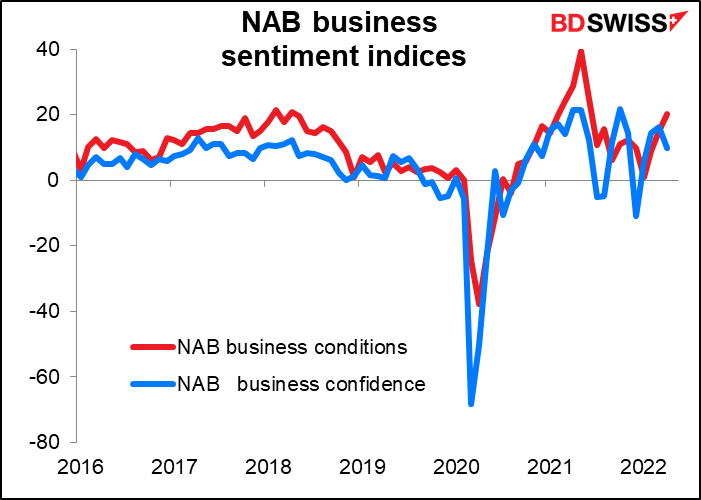 Then early Tuesday, another round of pre-opening UK indicators, this time the UK employment data.

The most important figure among all of these is the change in payrolled employees, because it’s a) the most accurate and b) the most up-to-date. It’s the equivalent of the US nonfarm payrolls. The forecast for May is for a gain of 70k, vs the six-month average of 80.2 a month. So somewhat weak but not worrisomely so. The standard figures, which are for April, are expected to be better. The change in employment is forecast to be the highest since last October, while the unemployment rate is forecast to fall 10 bps to 3.6%. This would be the lowest unemployment rate since 1974 and not far off the record low of 3.4% set in December 1973. 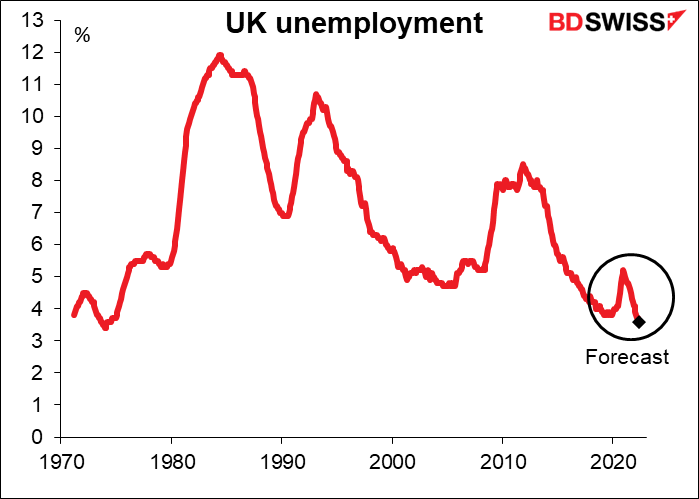 Coupled with the near-record low unemployment is a continuing sharp acceleration in the growth of average weekly earnings. This combination will only confirm the Bank of England’s view, set out in last month’s statement following the Monetary Policy Meeting, that “The risks to the inflation projection are judged to be skewed to the upside at these points, given the risks of more persistent strength in nominal wage growth and domestic price setting than assumed.” Thus I think the data lean toward confirming the fears of the hawks on the MPC. That means they are likely to be positive for sterling, even if the country’s politics suggest that the currency should in theory be trading at about parity to the Indonesian rupiah (slight exaggeration but not much). 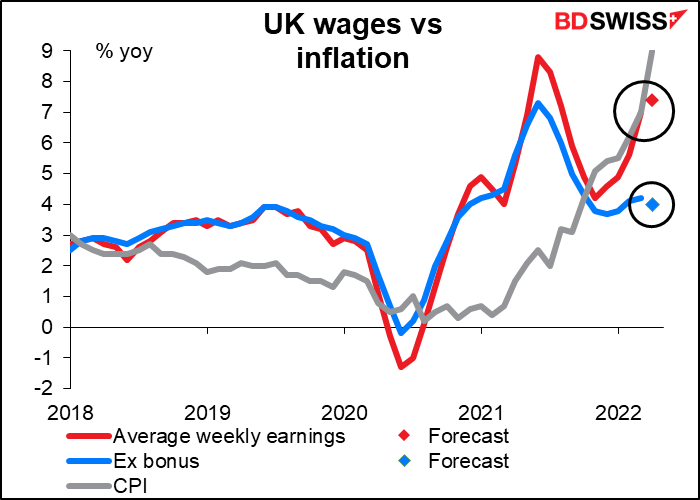 FYI with a record high 1.03 job openings for every unemployed person (data back to 2001) and a near-record low redundancy rate of 2.5% (data back to 1995), there’s never been a better time in Britain to be bad at your job! Slackers of the world, now’s your time to shine. 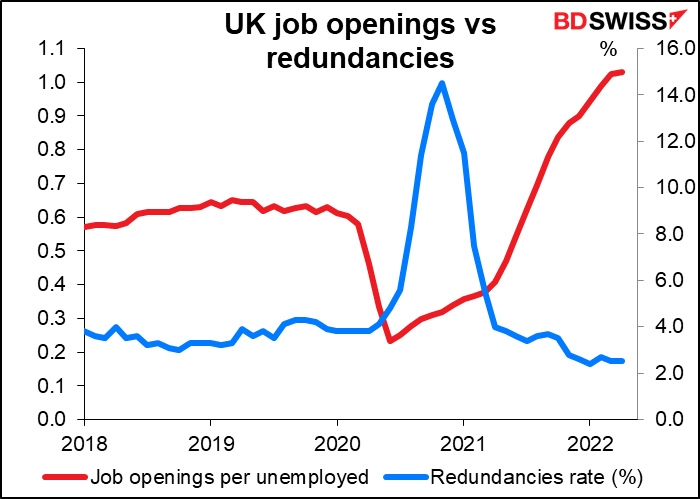 Finally, we get the final version of Germany’s harmonized index of consumer prices (HICP). The preliminary figure shocked people when it was released on May 30th – the market was looking for 8.1% yoy and instead it was 8.7% yoy (1.1% mom, more than double the expected +0.5% mom). Will it be revised up or down? Tune in to find out! 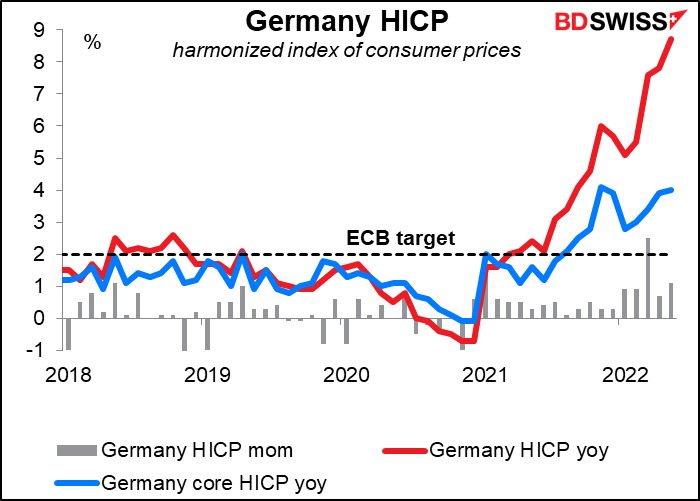 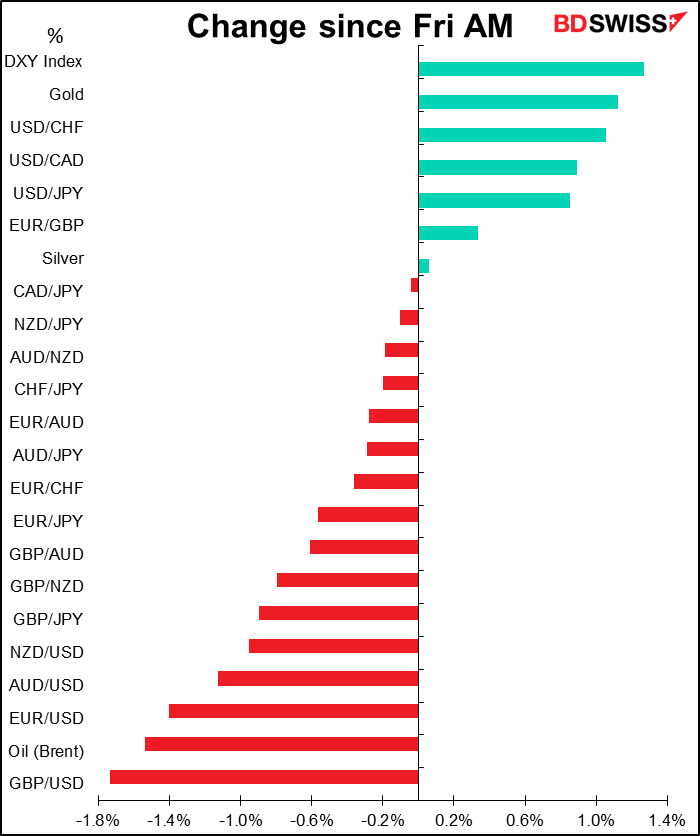