You are at:Home»MARKET PREVIEW»NZD down on weak employment data; Bank of England, ECB meetings 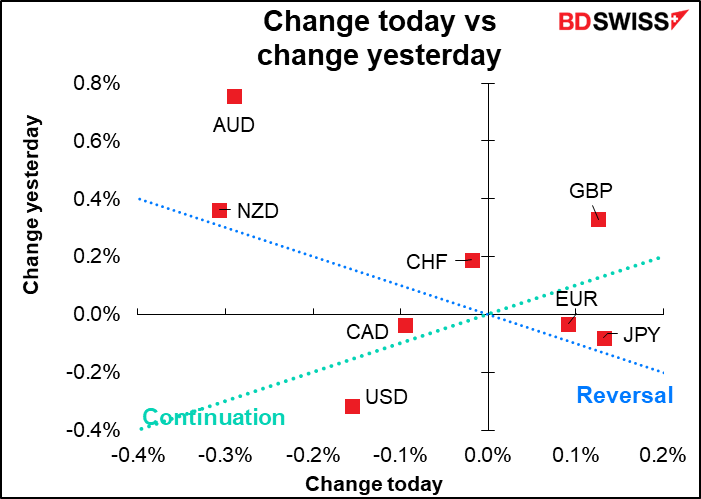 Not much movement in currencies today.

The biggest move was a reversal of NZD and AUD, as the second chart shows.

It’s surprising to me that EUR didn’t gain more after the Eurozone harmonized index of consumer prices (HICP) hit a record high of 5.1% yoy instead of falling back to 4.4% as expected. (Core inflation did fall somewhat, to 2.3% yoy from 2.6%, although it too beat estimates of 1.9%). 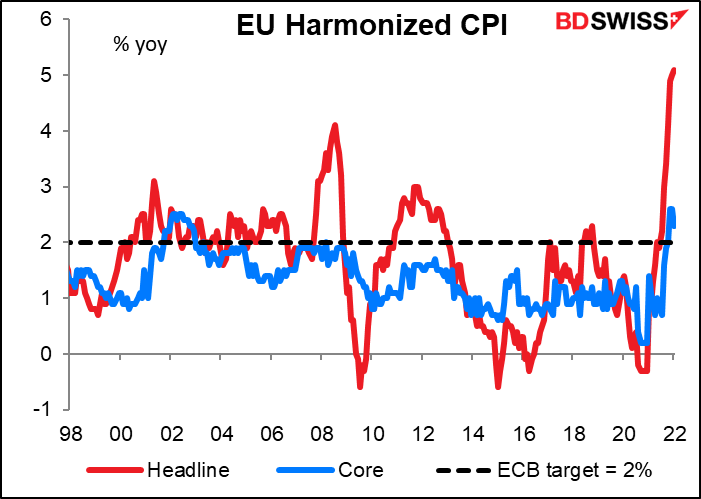 I think this is likely to be a big topic of conversation at today’s European Central Bank (ECB) meeting – can the Governing Council still believe the staff forecasts? The market doesn’t. Nor does it believe ECB President Lagarde’s pledge to keep rates unchanged this year — money markets briefly priced in 10bp of ECB hikes by July, and the overnight index swaps (OIS) incorporated a full 10bp hike by September at the London close. 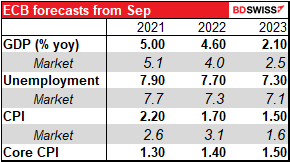 It’s also surprising that USD didn’t weaken more after the ADP shocked the market by reporting a 301k decline in jobs rather than the 180k increase that the market expected. Does that imply that this Friday’s US nonfarm payrolls may fall, too? Just a warning: while it has happened that before that one rises while the other falls, it’s pretty rare. In the 236 months since the ADP report started up in May 2002, it’s happened 28 times. However, 11 of those times were in the first two years, when it looks like they were tuning the algorithm. So perhaps we should say it’s happened 18 times in the most recent 216 months, or 8.33% of the time. Hmmm… not impossible but not likely either. Moreover, all those were times when the change was rather small, because of course given the difficulties of counting and the vagaries of seasonal adjustment, it’s more likely that one might be up 50k and the other down 50k than one up 500k and the other down. Indeed, only once have the two series moved in opposite directions when either one had an absolute value greater than 166k (in Feb 2003 the ADP was up 59k and the NFP was down 308k).

However, the point is that the Fed is focused on inflation, not employment. As long as the Fed thinks the US is at or near “maximum employment” they’ll keep hiking anyway. All that happened really is that the odds of six or more rate hikes fell and the odds of four rate hikes rose. That still could have some negative impact on the dollar, though. 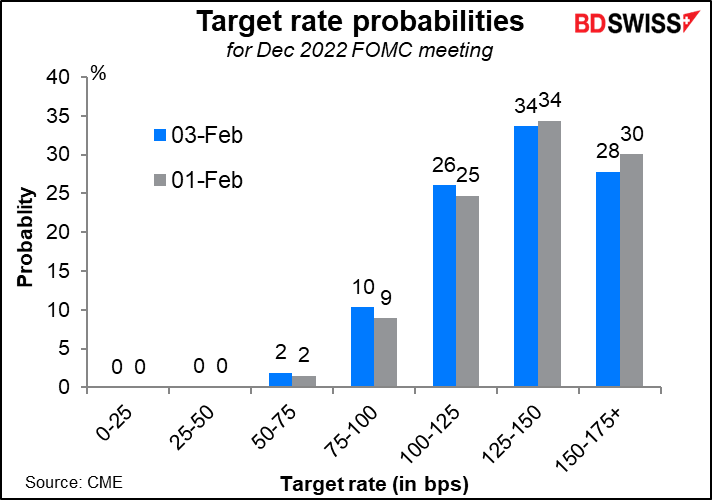 US stocks closed higher, with the S&P 500 +0.9% and NASDAQ +0.5%. But don’t get too excited! The Company Formerly Known As Facebook (Meta Platforms Inc.) forecast Q1 revenue of $27bn-$29bn vs consensus estimates of $30.25bn. The miss might not seem like much to you but companies usually guide analysts so that they manage to beat estimates. The company also announced the first decline in Facebook users ever. The stock fell almost 24% at one point, which wiped out around $200bn of market cap. My close friend Mark Zuckerberg apparently lost something like $24bn. I’ll have to take him out for a drink to drown his sorrows – my treat. Several other tech firms reported similar. Spotify was down almost 30% in after-hours trading after subscriber growth missed analysts’ expectations, while Qualcomm was down nearly 10%.  As a result, the NASDAQ 100 e-mini futures are trading down 1.9% while the S&P 500 futures are -0.50%. 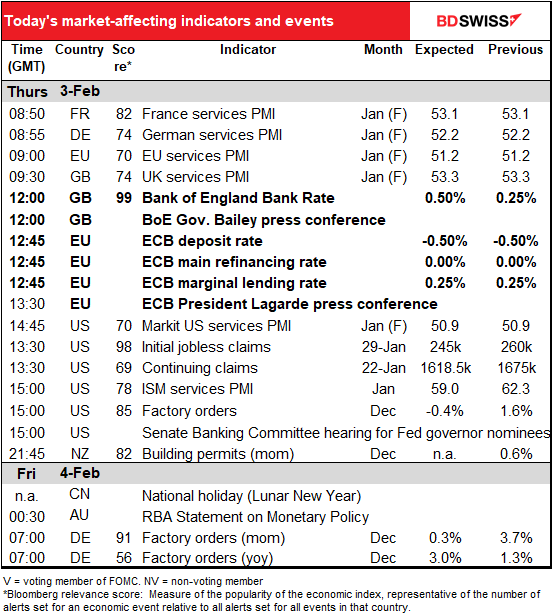 Today we get the service-sector purchasing managers’ indices (PMIs), including the final versions for those countries that have preliminary versions, which are most of the countries you care about.

Along with them comes the Institute of Supply Management (ISM) version of the same thing for the US. It’s expected to be down 2.7 points, but since the preliminary Markit version fell 6.7 points during the month, down only 2.7 points would be great. 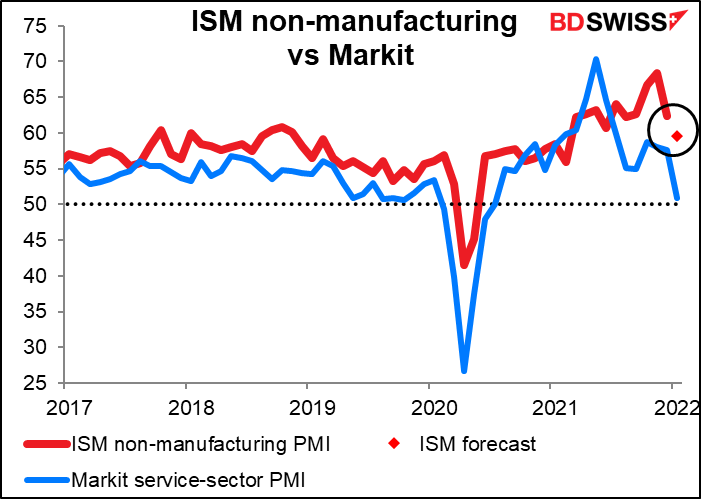 But that’s not what you’re interested in today, is it? Today your main concerns, if you are a) a sentient being and b) watching the FX market,  are 1. The results of the Bank of England Monetary Policy Committee (MPC) meeting and 2. The results of the European Central Bank Governing Council meeting, to give them both their proper names. Both of them I covered in my usual coruscatingly brilliant fashion in my Weekly Comment, But just to remind you (and also since I get paid by the word) I’ll run through the conclusions again here. If you’re interested in the details, please refer back to the original.

The Ship of State may be rudderless in Britain as the capitan is about to be keel-hauled, but below deck the navigators on HMS Grey Lady continue to set their course and sail. The market is now looking for five count ‘em five rate hikes this year, up from four just a week ago. 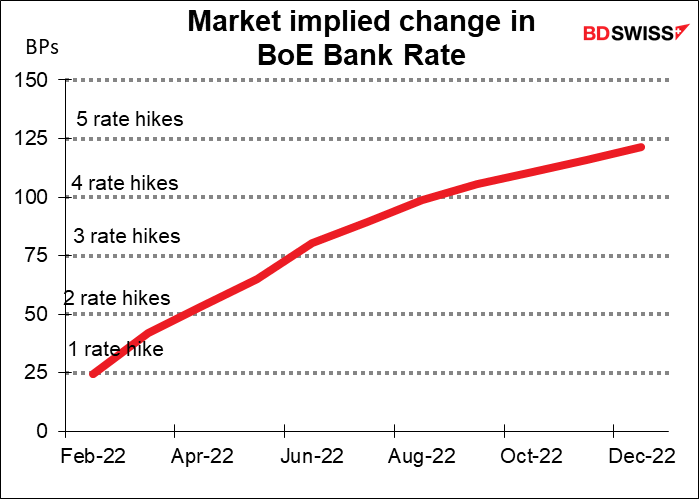 The question now is not whether the Bank is likely to hike 25 bps at this meeting – 38 out of 42 economists polled by Bloomberg expect them to (the other four see them keeping rates unchanged). The question for the market is whether the MPC will be sufficiently hawkish to justify the tightening that the market has already priced in. The market is pricing in the steepest tightening cycle in Britain since 1994. 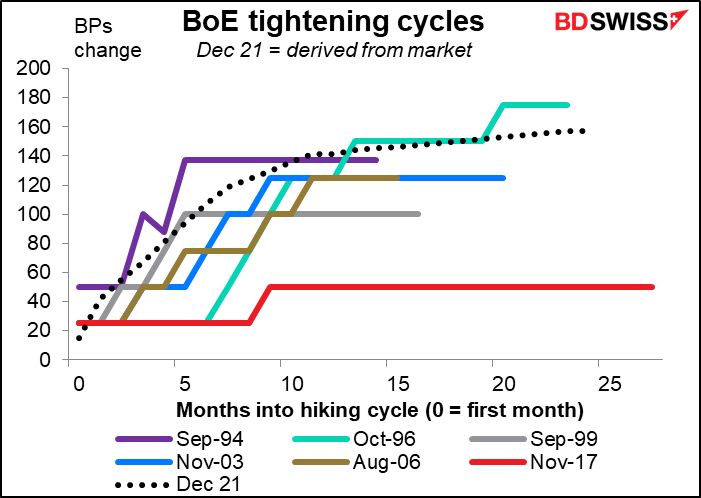 Of course, this hiking cycle starts with inflation higher and interest rates lower than any previous cycle under the current system. And the terminal rate that the market envisions would still be lower than the rate at which the previous hiking cycles started, except for the 2017 cycle. 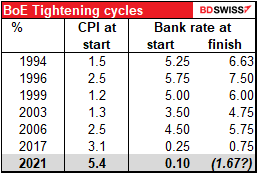 Along with the widely expected 25 bps rate hike, the statement is likely to talk about the Bank’s balance sheet, which is an issue all central banks face now that the era of “quantitative easing” is segueing into “quantitative tightening.” I expect the MPC to decide not to reinvest the proceeds from bonds maturing in their Asset Purchase Facility (APF) and instead will the APF to slowly melt away. This would not be a major hit to the market or economy as maturities this year are expected to be only GBP 39bn or some 4.3% of the APF.

Finally, the Bank will also publish a new Monetary Policy Report with updated forecasts. Looking at how their November forecasts compare with the market, they could raise their forecasts for both growth and inflation this year, which would only make it easier for them to justify tightening. 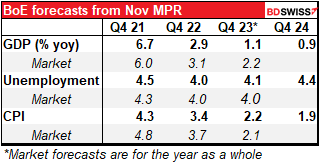 By contrast, the ECB probably will end the day with no change. They have a whole alphabet soup’s worth of programs: the PEPP (Pandemic Emergency Purchase Programme), the APP ( Asset Purchase Programme), and TLTROs (Targeted Long-Term Refinancing Operations). However none of them is ripe for tweaking at this time. As for their rates…as they say in New York, “fuggedaboutit.”

So what’s to look for in this meeting? Just more of the usual from ECB President Lagarde:

Here again, the market has moved up its estimates for ECB tightening markedly over the last week. The big question is whether the press conference justifies this shift in expectations. I think it will, which could support EUR. 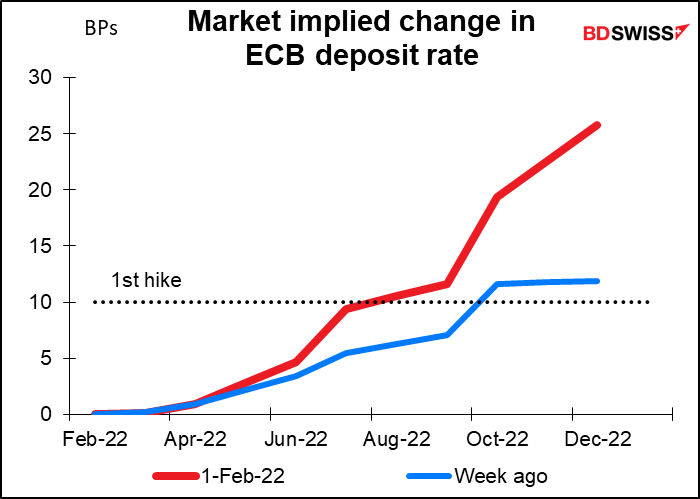 With all that excitement you might forget the weekly US initial jobless claims. They popped up a couple of weeks ago but fell back last week and are expected to fall back further this week.

Does it matter? With the US already at “maximum employment,” according to Fed Chair Powell in his recent press conference, this indicator probably is no longer as crucial as it was before. 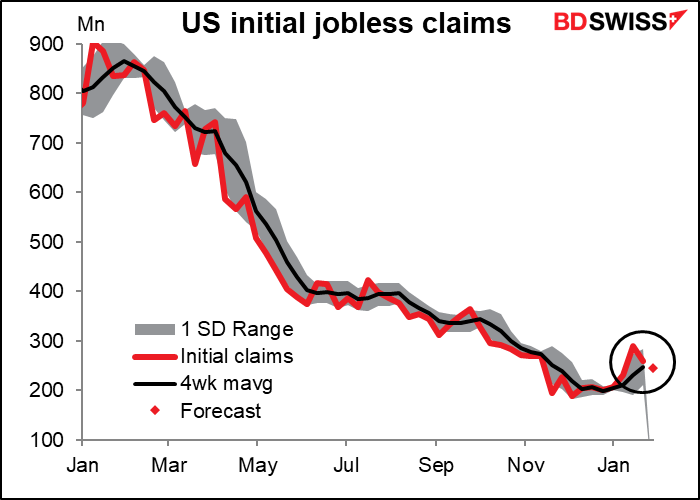 For the four years before the pandemic the 4-week moving average of claims (what people prefer to look at to smooth out one-week flukes) was between 200k-300k. I think with the unemployment rate as low as it is now, as long as claims remain within that range they won’t attract much attention.

I’m also going to stop covering continuing claims, which I don’t think give much of a signal anymore. 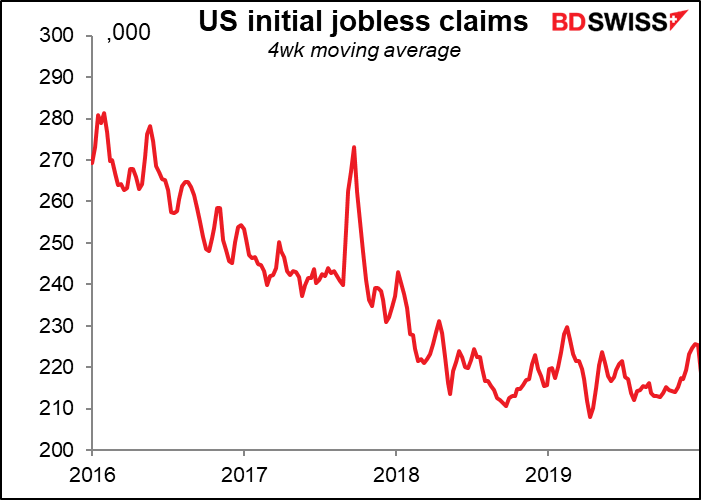 US factory orders are expected to be lower. I can never get excited about this indicator because, unlike German factory orders, it seems to be a lagging not leading indicator. The durable goods orders figure (-0.9% mom), which comes out a week or so earlier, accounts for 92% of the variability of this number. So why not just watch the durable goods and forget about factor orders? 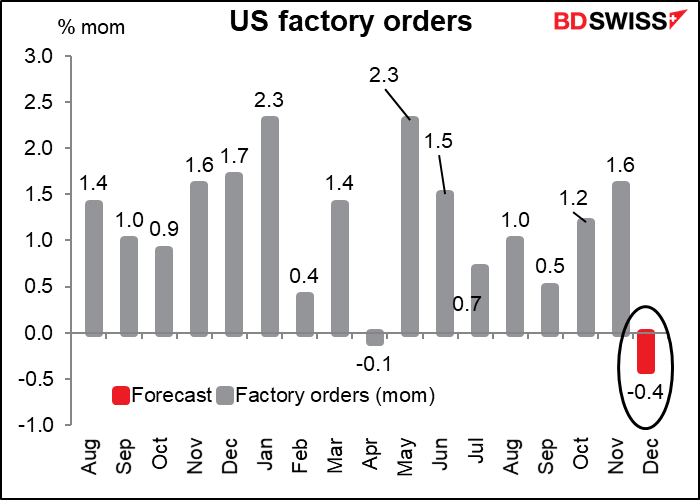 The Senate Banking Committee will hold its nomination hearing for the Biden Administration’s three nominees to the Fed Board of Governors. They are:

From what’s known of their work, all three are likely to lean somewhat dovish. We should get more details on their views today.

All three nominees have solid policy experience and impeccable research backgrounds. Although in general the Republicans find some reason to object no matter who the Democrats put forward, they seem to be less eager to play politics with the Fed – remember they rejected one of Trump’s nominees, the appalling Judy Shelton. One Republican Senator on the Committee, Pat Toomey, has raised some objections to Ms. Bloom-Raskin with ridiculous references to maintaining the “integrity and independence of financial regulators,” disregarding of course the fact that the previous regime tried to undermine the “integrity and independence” of all government regulators, not just financial ones, but never mind.

Assuming the Committee OKs these three, it’s unclear how long it will take for the full Senate to vote on them, since the fight to replace retiring Supreme Court Justice Stephen Breyer will no doubt take precedence.

Overnight, the Reserve Bank of Australia (RBA) releases its Statement on Monetary Policy. I hope they will explain the reasoning behind their ridiculous and indefensible decision Tuesday to keep policy unchanged while waiting for inflation to become “sustainably at target” even though inflation has been “at target” since Q3 last year and they forecast it would continue to be “at target”  or higher for the next two years at least. I mean, come on! How long does it have to be within the target to qualify as “sustainable”?

Finally, the European day starts over again with German factory orders, a much more interesting series than their US counterpart. Orders are expected to be up a mere 0.3% mom, which is the weakest growth in some time that’s still growth – although the six-month moving average for this series is for no growth at all, so perhaps we can say that even this meager number would be above-trend growth. In any event coming after the Q4 GDP figures have already been released the figure is likely to attract less attention than usual. 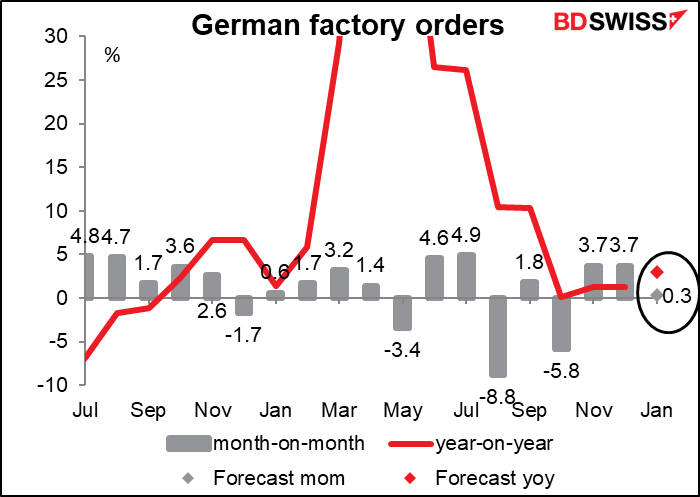 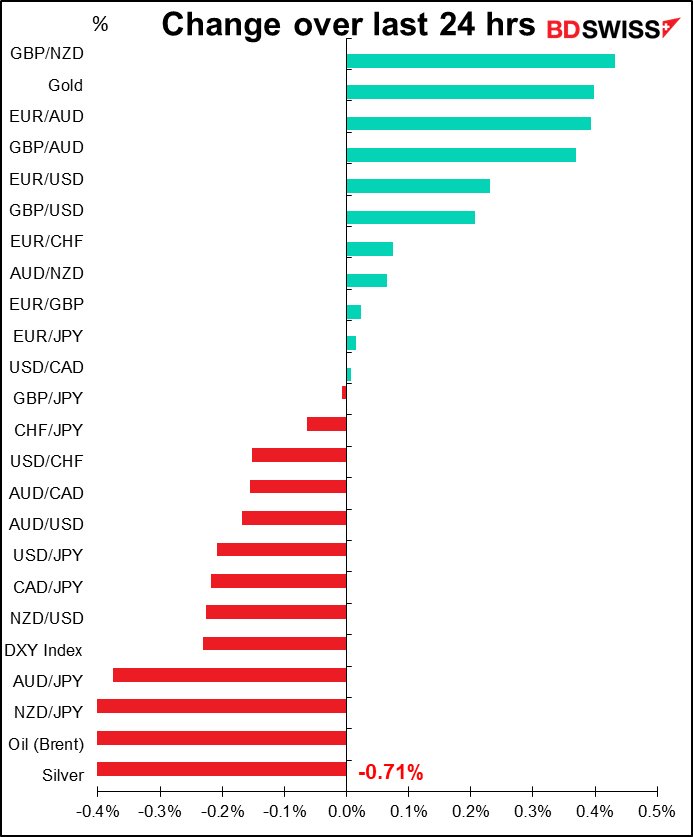