You are at:Home»MARKET PREVIEW»Euro Surges as ECB Pivots; US Nonfarm Payrolls 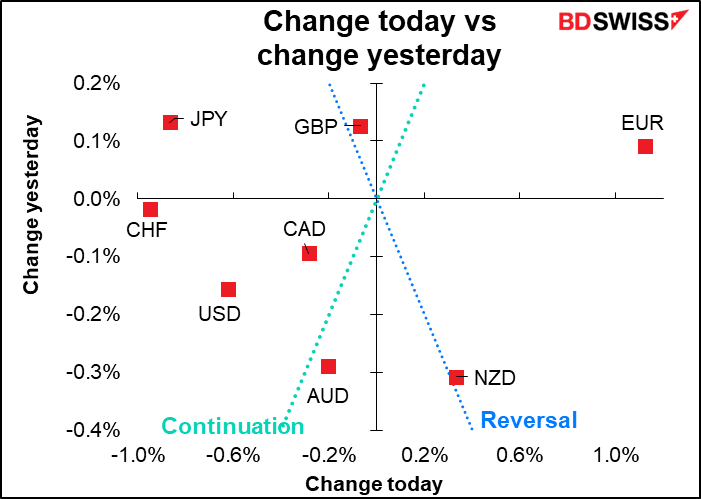 A tale of two central banks, both of which surprised the market by their hawkishness. Let’s take them in order.

The Bank of England shocked the market with its 5-4 vote to hike rates by 25 bps. The shocking point was that four of the members wanted to hike by 50 bps! There hasn’t been a 50 bps hike in Britain since the 1994/95 hiking cycle (there were 3 of them then). (This was also the first back-to-back increase in rates since 2004.) The Bank also agreed to stop reinvesting maturing government bonds in the Asset Purchase Facility, as expected, and also to stop reinvesting maturing bonds in its GBP 20bn corporate bond stash (not expected).

There were two fundamental messages from the Monetary Policy Committee (MPC). First off, as we knew, more hikes are likely – or as they put it, “some further modest tightening in monetary policy likely to be appropriate in the coming months.”

On the other hand, the degree of tightening necessary to get the economy back into equilibrium isn’t that great. “It would not be surprising if we saw a further increase, but please do not get carried away,” said Gov. Bailey in his press conference. The tone of his comments was somewhat softer than the 5-4 vote implied. That may be because the Bank’s new forecasts, which are based on now-outdated market assumptions about interest rates, have inflation well below target (1.6% yoy), growth below potential (0.9%), and the unemployment rate higher (5%) in three years. This implies the Bank doesn’t see the need for more tightening than the market had priced in already. 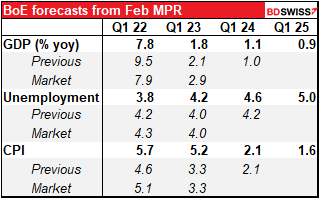 Meanwhile, across the Channel, the European Central Bank (ECB) issued a rather standard statement following its meeting that had only a few hints of a change. The big news was reserved for the press conference. “The situation has indeed changed” was the key statement by ECB President Lagarde at the press conference. She said the  Governing Council had “unanimous concern” about inflation. “Compared with our expectations in December, risks to the inflation outlook are tilted to the upside, particularly in the near term,” according to the statement at the press conference. “If price pressures feed through into higher than anticipated wage rises or the economy returns more quickly to full capacity, inflation could turn out to be higher.” Moreover, the conclusion of the statement included a new reference to the ECB being data-sensitive: “We will remain attentive to the incoming data and carefully assess the implications for the medium-term inflation outlook.”

What wasn’t said was significant, too. They dropped the reference to monetary accommodation being necessary to stabilize inflation at 2% in the medium term and President Lagarde didn’t repeat the previous message that a rate hike in 2022 was “unlikely.”

What does this mean for ECB policy? President Lagarde said the ECB will be “very faithful” to the planned sequencing of exiting from their extraordindary policies. That means they still plan to stop their quantitative easing programs before they start hiking rates. The guidance says that purchases in the Asset Purchase Programme (APP) will end “shortly before” they start raising rates.  Lagarde said that the preference is for a “gradual” exit from net purchases and that the next step is about the “pace, speed and amount” of net purchases. So everyone will be waiting for the March 10th meeting to find out what they decide to do about the APP, which will determine when they can start hiking rates.

If the new staff forecasts in March show inflation remaining above target, they could announce a tapering of APP purchases over Q2. Then at the June meeting they announce the end of APP purchases, which would set the stage for a rate hike in September (assuming that “shortly” = three months). If things are looking grim though they could accelerate this schedule – they could decide to finish the APP purchases in April or May and hike as early as June, if “shortly” means only one month. This accelerated schedule would be bullish for EUR.

It’s instructive to look at how EUR/GBP traded during all this. When the results of the Bank of England meeting came out at 12:00 GMT, EUR/GBP fell sharply (GBP gained on EUR) to the lowest level since April 2017, as far as I can tell (I don’t have intraday prices back that far). But as soon as the ECB press conference started and it became clear tha the ECB was changing its tune, the market changed direction. 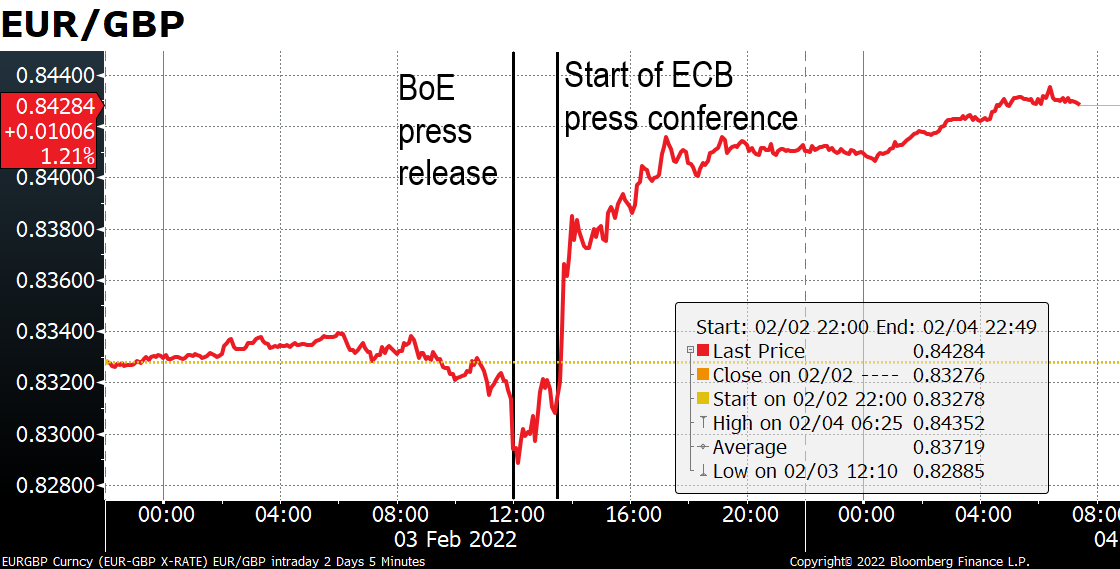 Why the big change, when the Bank of England actually did something and the ECB didn’t? Because the change in expectations for the ECB was greater. 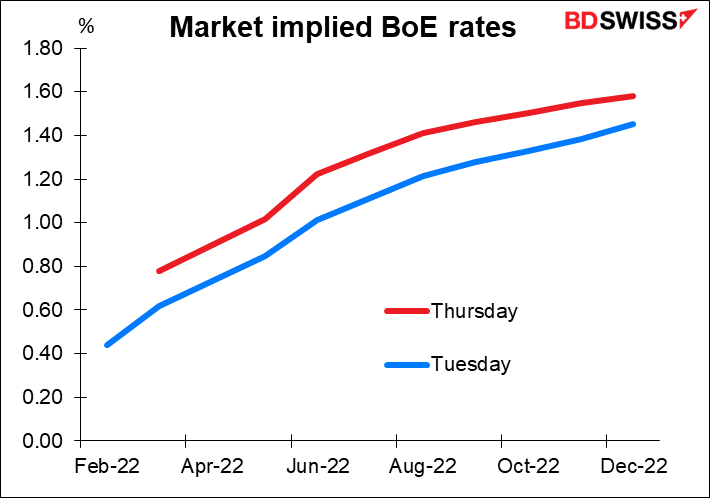 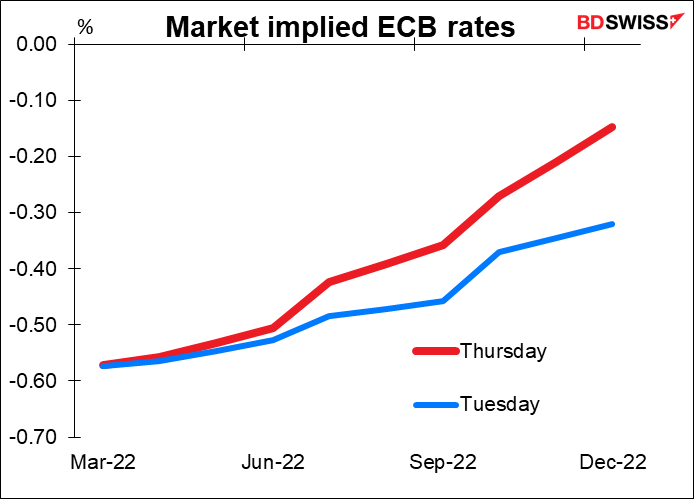 If we look at the change in the expected change in policy rates over the next year, the market upped its forecast for the ECB by 31 bps and the Bank of England by 26 bps. But even more important than that is the change in tone of the ECB. The change at the BoE was a matter of degree, whereas with the ECB it was a change in direction.

Curiously, the greatest increase in expectations was in CHF, but CHF was nonetheless the weakest currency. That’s probably because CHF rates are still expected to be negative a year from now (-0.06%) whereas ECB rates are expected to be positive (+0.07%)

Expectations for other countries’ rates didn’t move by anywhere near as much over the last week. Given the sharp rise in expectations for Swiss rates, plus the plunge in global stock markets following the Facebook shock, it’s notable that CHF was the worst-performing currency and JPY #2. Usually I’d expect those two to be up on “safe-haven” flows during such a risk-off day. Perhaps that has something to do with the speech by BoJ Deputy Gov. Wkatabe, who repeated Gov. Kuroda’s line that the BoJ is “not thinking about policy adjustment at all” and in fact the BoJ won’t hesitate to add to its easing measures if needed. The BoJ theme song really is that popular karaoke tune, “My Way.” 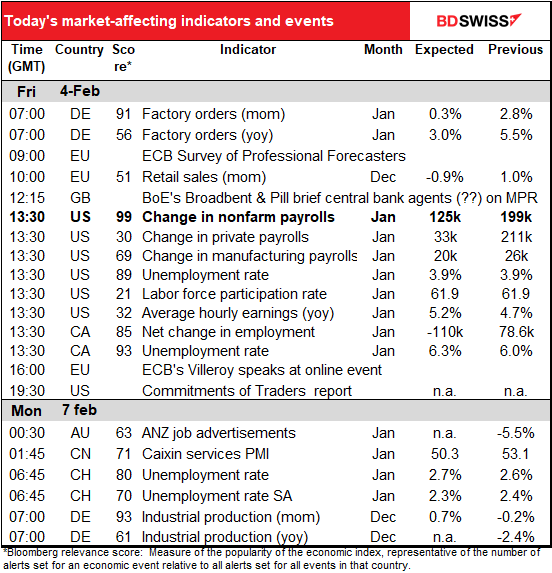 The big thing today is obviously the US nonfarm payrolls (NFP), the crucial indicator every month (along with the consumer price index) to tell us whether the Fed is meeting its “dual mandate” of stable prices and maximum employment.

Forecasts were thrown into chaos Wednesday when the ADP report shocked everyone by showing a decline of 301k jobs, vs a forecast of +184k. This is a huge turnaround from the previous month of +807k.

Will the NFP at least be positive? It has happened that before that one rises while the other falls. In the 236 months since the ADP report started up in May 2002, it’s happened 28 times. However, 11 of those times were in the first two years, when it look like maybe they were tuning the algorithm. So perhaps we should say it’s happened 18 times in the most recent 216 months, or 8.33% of the time. Hmmm… not impossible but not likely either. Moreover, all those were times when the change was rather small, because of course given the difficulties of counting and the vagaries of seasonal adjustment, it’s more likely that one might be up 50k and the other down 50k than one up 500k and the other down. Indeed, only once have the two series moved in opposite directions when either one had an absolute value greater than 166k (in Feb 2003 the ADP was up 59k and the NFP was down 308k).

In the financial world we’re taught always to say “past performance is no guarantee of future performance,” and of course given the extraordinary situation we find ourselves in nowadays with the pandemic, the upheaval in the labor market, the huge increase in self-employment, and the change in climate that affects the seasonal adjustment, it’s not impossible that the NFP ekes out a gain today. Perhaps the ADP report is just undergoing “mean reversion” after December’s surprisingly large 776k gain. Taking December and January together, the ADP was up 475k in the two months. The NFP was up only 199k in December; it could be up 276k in January to show the same two-month gain as the ADP.

In that context, the market forecast of +125k doesn’t seem as impossible. Still…

Note that the Bloomberg “whisper,” the unscientific poll of whoever has a Bloomberg terminal and wants to vote, is for only 22k. This suggests the market is braced for a much lower figure. 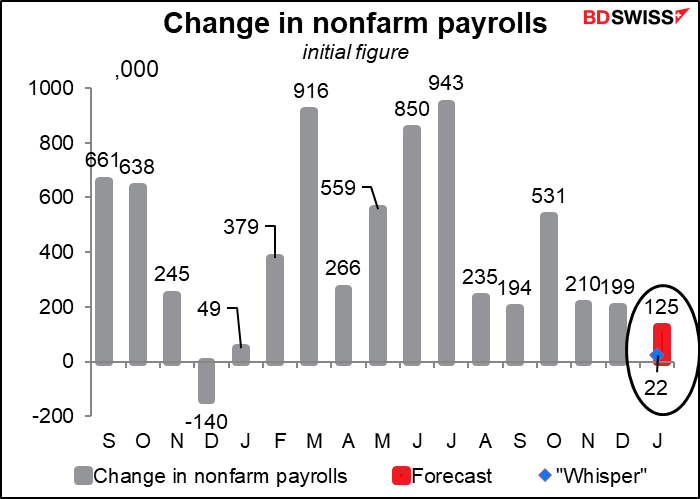 How does the market move when NFP misses estimates? The last six times NFP has missed estimates, it hasn’t been that negative for the dollar. On the contrary, EUR/USD has fallen (i.e., USD strengthened relative to EUR) for the following day or two five out of six times, and finished the week unchanged to lower four out of six times. Probably this is because the bar to the Fed not moving is very high. The figure would have to be disastrous to dissuade the Fed from moving. The question is, would a fall in payrolls be considered disastrous enough to dissuade the Fed from moving? Probably not. But it might take some of the shine off of those estimates of five or even six rate hikes this year. That’s what happened immediately after the surprise fall in the ADP report: the odds of six or more rate hikes this year fell and three or four rose. But even that possibility seems to have been tossed aside. Now the market sees six rate hikes as the most likely outcome vs five before the ADP figure was released. Perhaps people assume that the January figure was a fluke caused by the spread of the omicron variant. With the number of new cases coming down rapidly, employment should quickly return to the previous level. 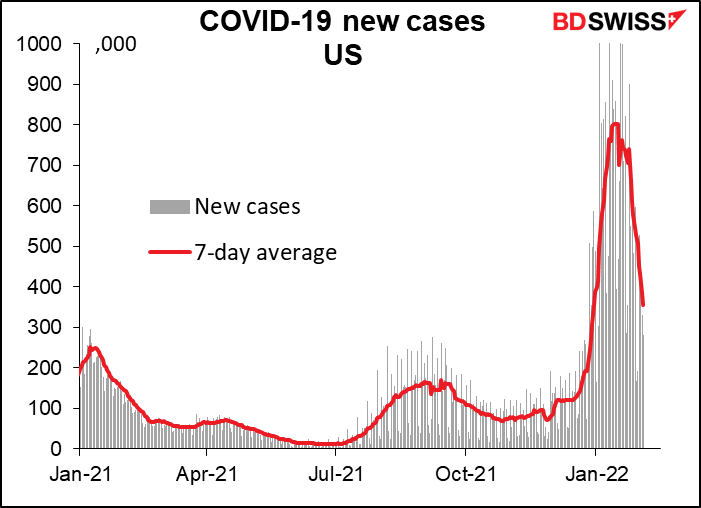 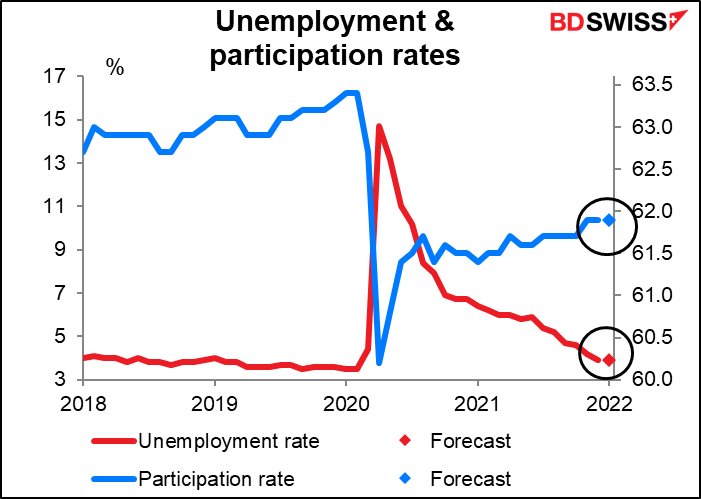 Average hourly earnings are expected to be up more than in the previous month, but not as much as the personal consumption expenditure (PCE) deflator was. That means the average worker is still losing ground to inflation. Does the Fed think that’s good in that it means no wage/price spiral, or do they want to see workers gaining so that inequality in the US is reduced? I don’t know. 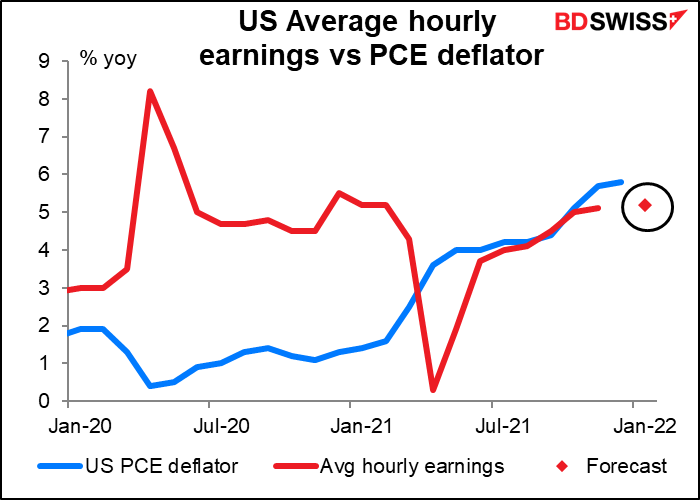 In addition to the US employment data, as usual we’ll get the Canadian employment data too. The number of jobs is expected to fall and the unemployment rate rise as result of the reintroduction of social distancing measures in several provinces. 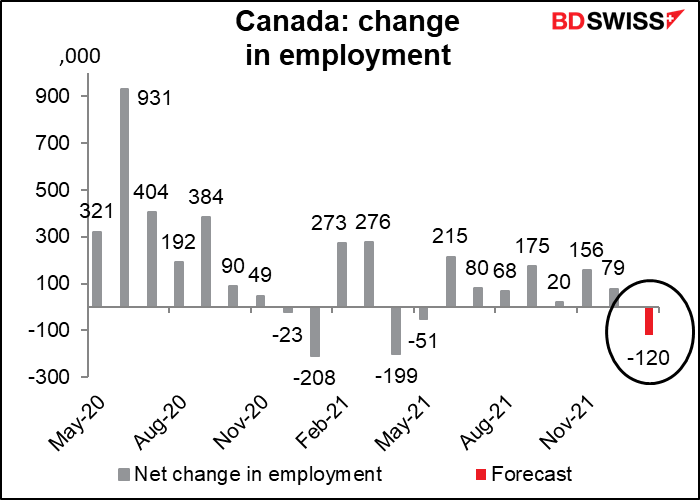 Cases have started to come down recently though so I think the market will probably “look through” these figures and assume that as the situation improves, the authorities will relax restrictions and employment is likely to bounce back. 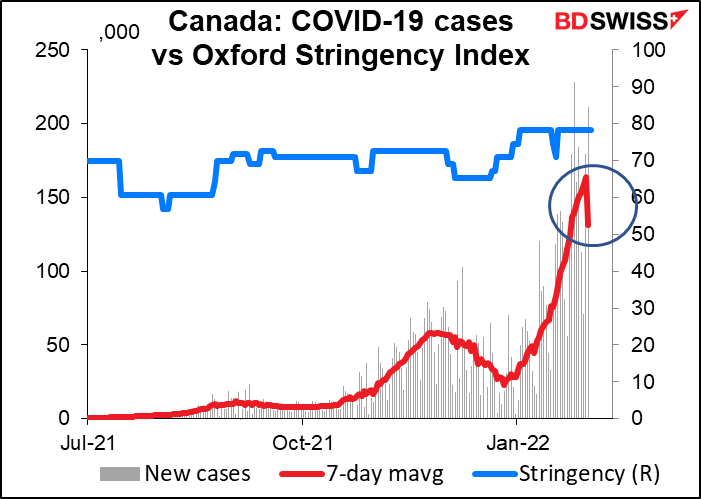 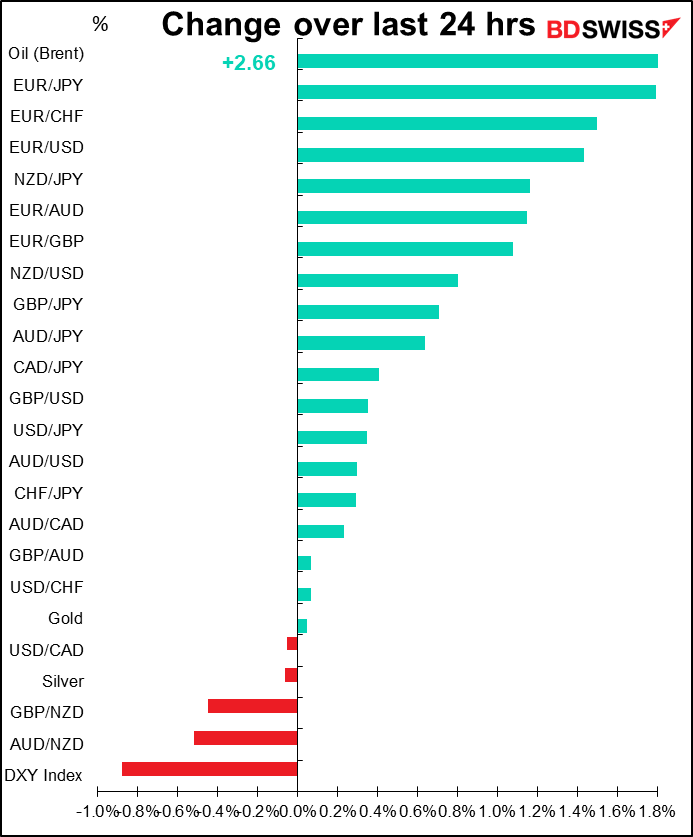