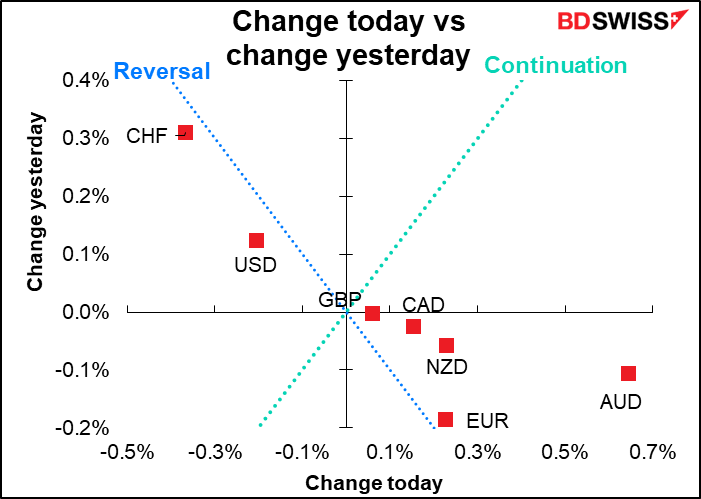 It’s all down to Russia and Ukraine now. What people think Russia is likely to do in Ukraine is driving risk sentiment, and risk sentiment is what’s driving currencies. Trading started out in a “risk-off” mood, but after media reports appeared suggesting that Russia would return some of its troops to military bases after drills, risk sentiment shifted dramatically and markets recovered.

I wish I could give a confident opinion on what is likely to happen, but I have no particular expertise in Russian foreign policy. I will therefore just point out how Russia is driving markets now and let you make up your own mind about what President Putin is planning to do.

You can see the almost one-for-one movement between the Russian ruble, RUB (red line) and the S&P 500 e-mini futures (blue line, inverted).

With risk sentiment coming back, the commodity currencies were the best performers and the safe-haven JPY and CHF were the bottom. Notice how CHF/JPY has tended to follow USD/RUB, in other words how it’s been tracking the Ukraine crisis too. Switzerland may be closer to the action than Japan but JPY is the pre-eminent “risk barometer” currency.

Among the commodity currencies, CAD was the worst performer as oil prices fell. Funny that it didn’t get much support as oil prices rose in recent days but seems to have been hit as they fell. This has pushed AUD/CAD higher.

I would expect though that as oil prices recover somewhat (my expectation), AUD/CAD may move lower again. Although the American Petroleum Institute (API) reported that US oil inventories fell 1.076mn barrels in the latest week, less than the market’s expectation of a 2.174mn bbl drawdown in this afternoon’s US Dept of Energy statistics. A smaller-than-expected drawdown could put oil prices under further pressure and push AUD/CAD higher – for now. 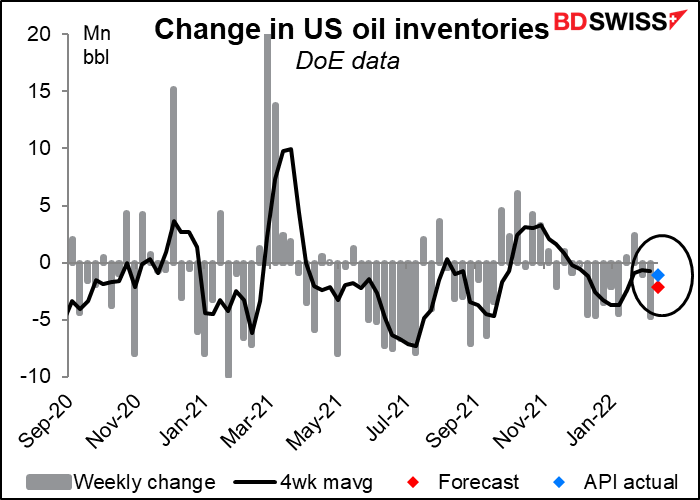 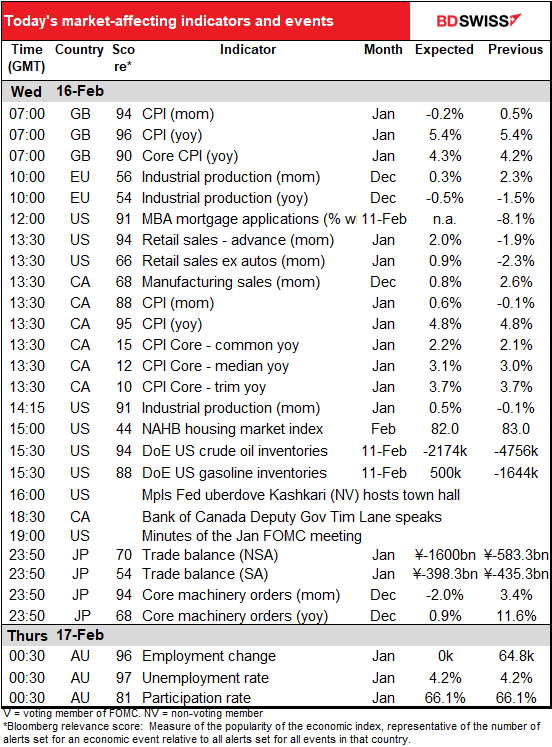 The UK consumer price index (CPI) is already out. It was slightly higher than forecast, which will only increase expectations that the Bank of England will tighten policy. GBP+

Next on the schedule is Eurozone industrial production (IP). This isn’t a major indicator for the market but I have seen it move EUR/USD once or twice. Of course with Germany, Spain, Italy, and France having already reported their figures, the EU-wide result is rarely in doubt. The national figures point to a slightly softer end to 2021 than expected, with activity expected to be up only slightly on a mom basis. Supply chain issues and concerns about the Omicron variant continue to weigh on output, which may have continued to constrain output. 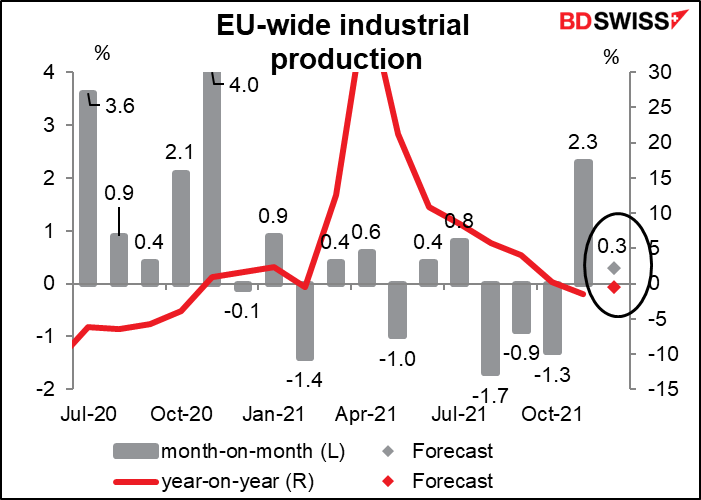 Nonetheless the EU is doing pretty well on this metric. It’s on par with the US and ahead of Japan and the UK. It’s even ahead of Germany, which would usually be expected to be the engine of growth for the Eurozone. 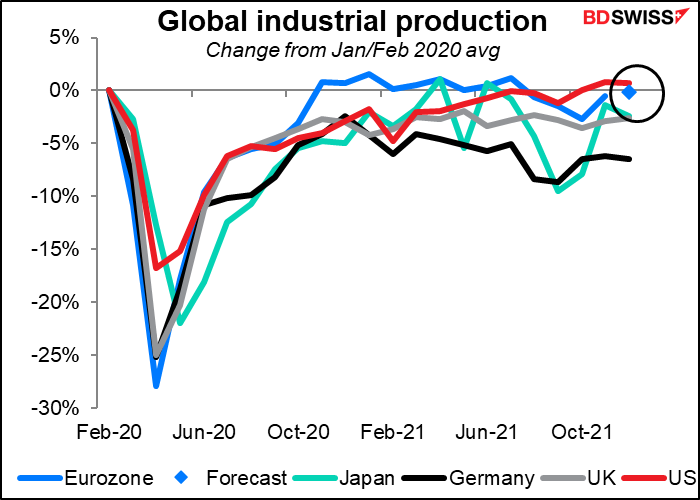 Next up is the US retail sales, the key US indicator for the week. The headline figure should get a boost from the 7.8% increase in auto sales during the month. 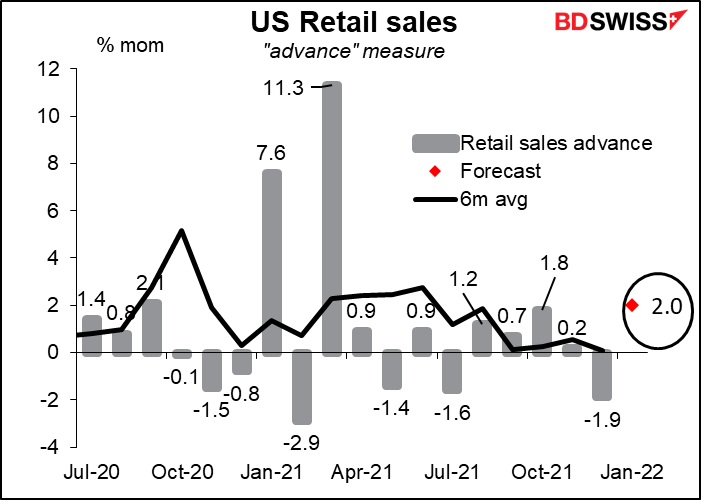 But even excluding autos, sales are expected to do well. Non-store retailers accounted for 64% of the unexpected decline in December retail sales; this usually reverses the following month. 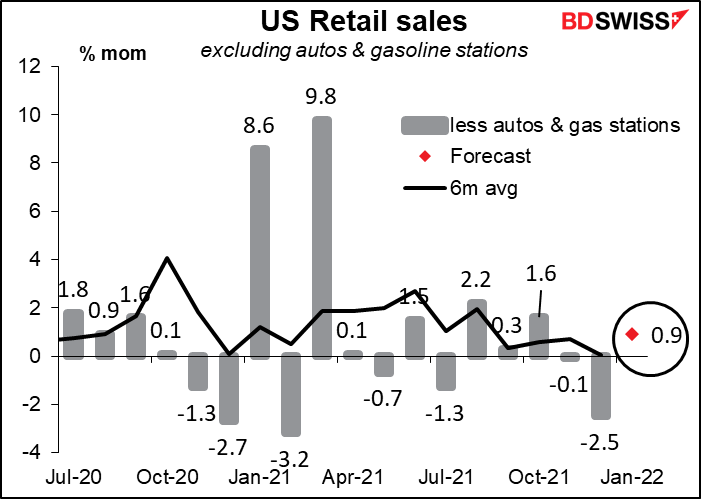 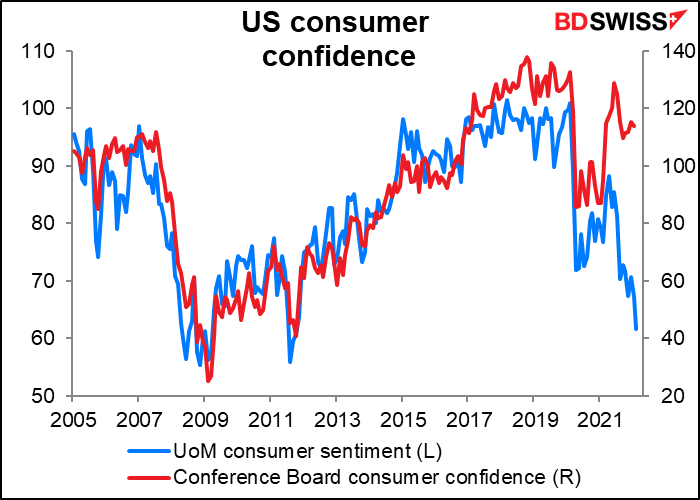 A rebound in US retail sales should be taken as a sign of a healthy economy and therefore is likely to be positive for the dollar.

FYI the headline retail sales index has beaten estimates 6 times and missed 6 times over the last year, with the last three times being misses. The range of forecasts is +0.3% to +5.5% (median +2.0%), meaning most economists are forecasting a low figure. An upside surprise should therefore be more of a surprise than a downside surprise. 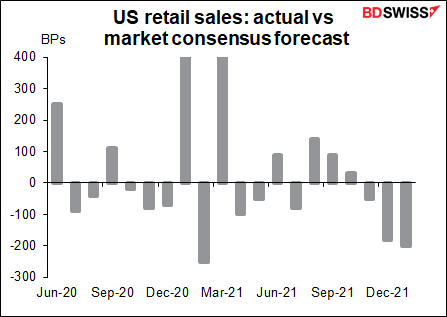 Canada’s CPI is expected to rise on a mom basis but to be fairly stable on a yoy basis. The headline figure is expected to remain unchanged yoy as are two of the three core measures.

Will this be enough to force the Bank of Canada’s hand? At their last meeting (Jan. 26th) they removed their “exceptional forward guidance” on their policy interest rate. (Just to remind you, they pledged to hold rates steady “until economic slack is absorbed so that the 2 percent inflation target is sustainably achieved,” which they forecast would probably happen “sometime in the middle quarters of 2022.” ) My guess is that so long as inflation isn’t coming down, and with the average of their three trimmed measures about to poke its nose above their 3% target range, they’ll be ready to move at the next meeting (March 2nd). 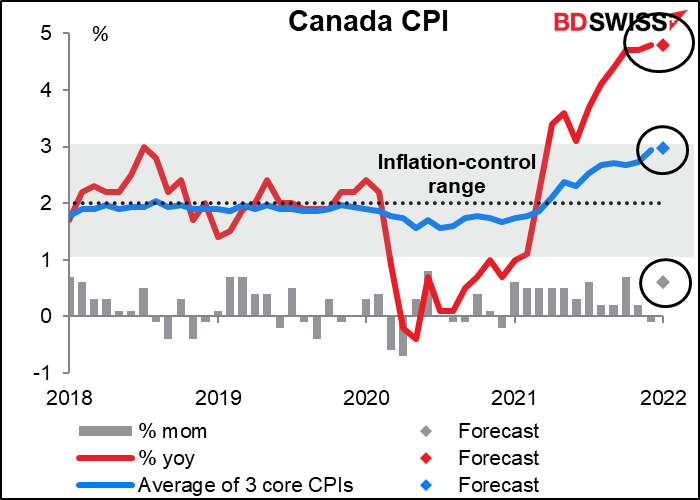 The market is already pricing in a rate hike at every Bank of Canada meeting until October. I’m not really sure how much more a further rise in inflation would do. 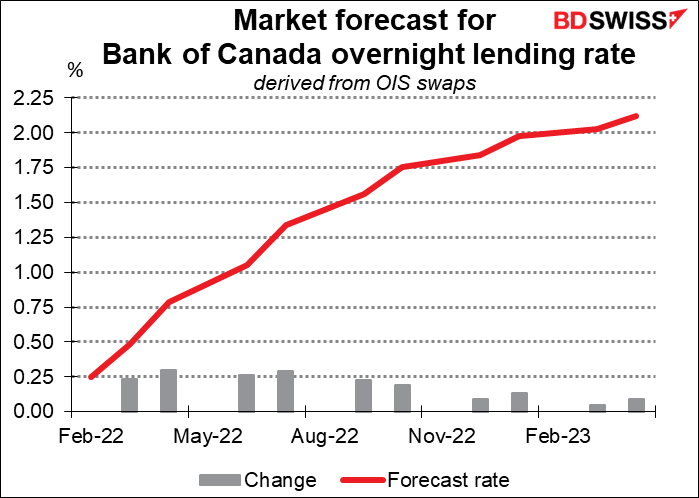 By the way, the last three months the market consensus for this figure has been spot on and the previous month it was off by only 10 bps. The survey is pretty closely clustered around 4.8%, with the range being 4.7%-5.1%. 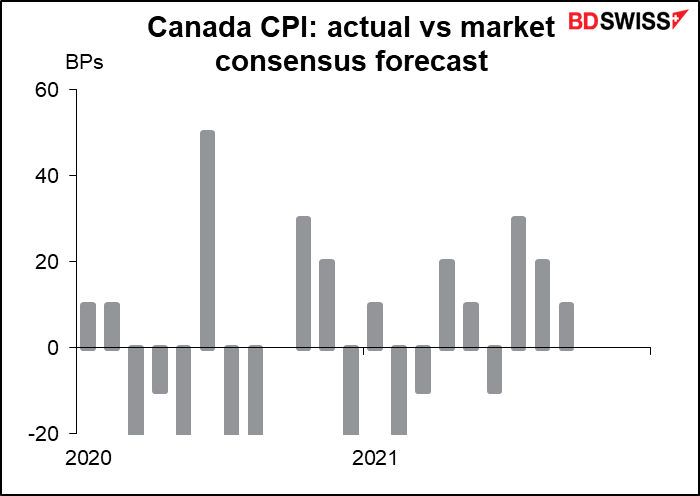 US industrial production is a major indicator for the US but it doesn’t seem to have that much impact on the FX market. The market forecast is for it to be substantially higher than the recent average (+0.24% mom) despite the bad weather in January. That might provide some proof of the economy’s resilience and could be considered positive for the dollar. 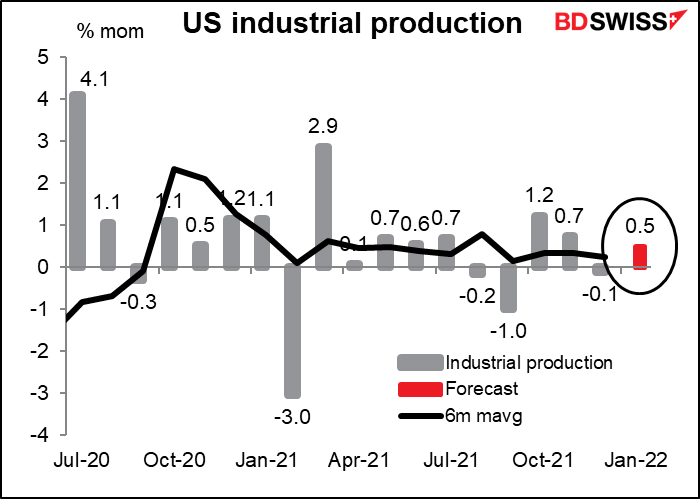 Late in the US day, the Fed releases the minutes of the latest meeting of the rate-setting Federal Open Market Committee (FOMC). Usually this would be the highlight of the day, but this month I think the minutes are already out of date.. Since the meeting took place on Jan. 26th we got the blow-out January employment data showing 467k new jobs plus last week’s shocking CPI showing inflation at a 40-year high. Market participants are now looking ahead to the March meeting more than looking back at the January meeting.

In any case, people are bound to read the minutes closely regardless. The key point will be the discussion around running down the Fed’s balance sheet: when will they start it and how quickly do they want it to happen? Also they’ll look for any clues about the Fed’s “reaction function,” or how it will respond to inflation in the future. People will want to know what they consider to be an “improvement” in the inflation situation that might get them to stop or at least slow the pace of tightening.

Japan machinery orders are an important indicator for capital investment in Japan which is one of the driving forces of the Japanese economy. They’re therefore one of the more closely watched Japanese indicators. Although orders are supposed to be down 2.0% mom, that would still leave the three-month moving average at +1.7% mom, i.e. still in a rising trend. That’s good for now but we’ll have to see how well they hold up as growth slows. 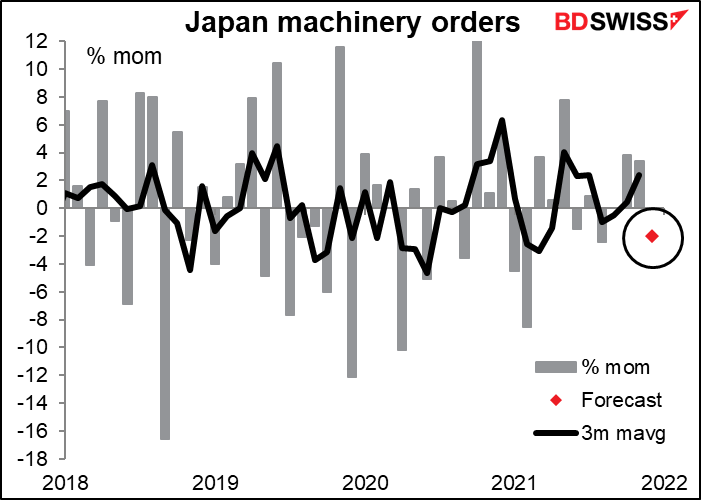 At their last meeting they once again complained that “Wages growth also remains modest and it is likely to be some time yet before aggregate wages growth is at a rate consistent with inflation being sustainably at target.” So the labor market is one of the factors holding them back from raising rates even though most sentient beings would argue that they’ve more than met their goal of inflation being “sustainably within the 2 to 3 per cent target range.”

Having said that, it looks like today’s data aren’t expected to be what tips the scales for them. On the contrary, with no new jobs expected to be created and the unemployment rate and participation rate (not shown) both forecast to remain unchanged, they might feel justified in thinking that there hasn’t been an increase in wages growth and so they can go back in their burrow. 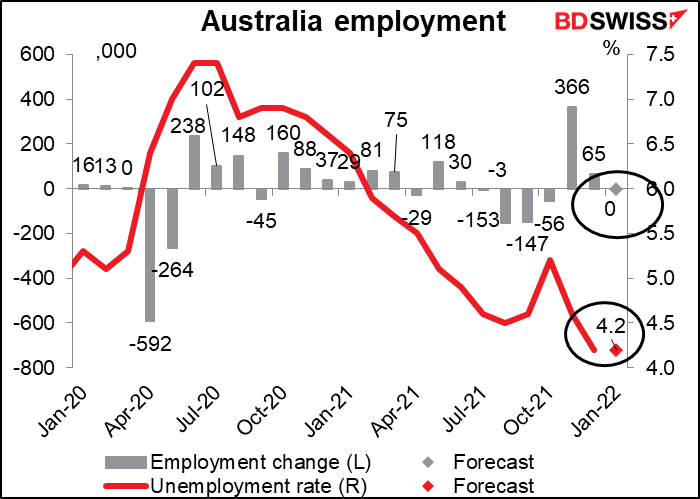 The big indicator for Australia’s labor market will be on Feb. 23rd, when they announce the quarterly wage price index.