You are at:Home»MARKET PREVIEW»Safe-havens Up, EUR & USD Down as Market focuses on Ukraine; US housing starts, UK retail sales 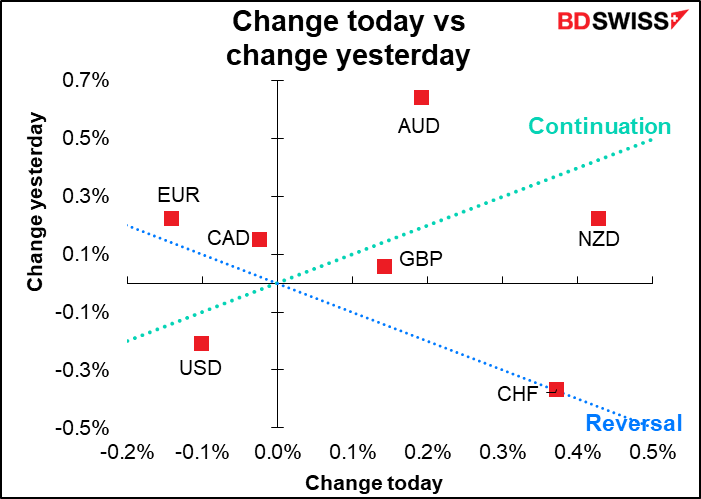 Once again it’s Russian roulette for the markets. “Will they or won’t they?” is the question the markets are facing. Things were looking hopeful on Tuesday but not so yesterday – NATO Secretary-General Jens Stoltenberg held a press conference in which he said “so far, we do not see any sign of de-escalation on the ground.” Russia dismissed the claims, but Mandy Rice-Davies applies, as they say in Britain. Politicians are still hoping for a diplomatic solution. US President Biden and German Chancellor Scholz meet today ahead of an emergency summit of European leaders on the Ukraine crisis. There will also be a G7 foreign ministers meeting Saturday.

So why then was NZD the top-performing currency? It’s kind of a mystery to me, but it’s clear that for some reason AUD/NZD is tracking the Ukraine risk. I suppose AUD is the pre-eminent “risk-on” currency and so when people think “risk-off” they sell AUD and what better to sell it against than NZD?

This may seem logical on the surface but it’s actually illogical. I’d say the reverse should happen. Russia is not only a major oil & gas exporter but also exports a lot of minerals, including a lot of iron. If other countries decide to penalize Russia with sanctions it’s going to push up the price of goods that Australia exports much more than the price of what New Zealand exports. (Russia and NZ only compete in the timber market as far as I can tell.) From that point of view it seems to me that fighting in Ukraine might well be beneficial for AUD as long as it doesn’t impinge on the Chinese housing market. (Russia does not seem to be a significant export market for either country.)

The decline in EUR and especially USD was similarly puzzling to me. US retail sales far exceeded estimates, +3.8% mom vs +2.0% expected. Moreover this wasn’t just autos; excluding autos, sales were +3.3% vs +1.0% expected.

Instead, the market focused on the minutes of the January meeting of the rate-setting Federal Open Market Committee (FOMC), which disappointed those who were looking for some hawkish signals. On the contrary, the minutes didn’t have any material signals about the next steps for monetary policy. They provided some additional detail about how policymakers view economic conditions and clarified the debate around balance sheet runoff and rate hikes, but there were no clear signals about whether they prefer to initiate “lift-off” with a 25 bps or 50 bps hike at the March meeting. As a result the odds of a 50 bps hike in rates, the overwhelming market consensus a week ago, faded further and the odds of a 25 bps hike rose.

They did discuss how different the economic backdrop is at the start of this policy tightening cycle compared to the last one in 2015 (CPI 7.0% vs 0.7%, unemployment 4.0% vs 5.0%) and as such concluded that “a faster pace of increases in the target range for the federal funds rate than in the post-2015 period would likely be warranted.” However we already knew that from what several Committee members have already said, that policy is likely to tighten at a faster pace than the “gradual” pace that set the tone for the last hiking cycle, and the market has already priced that in. 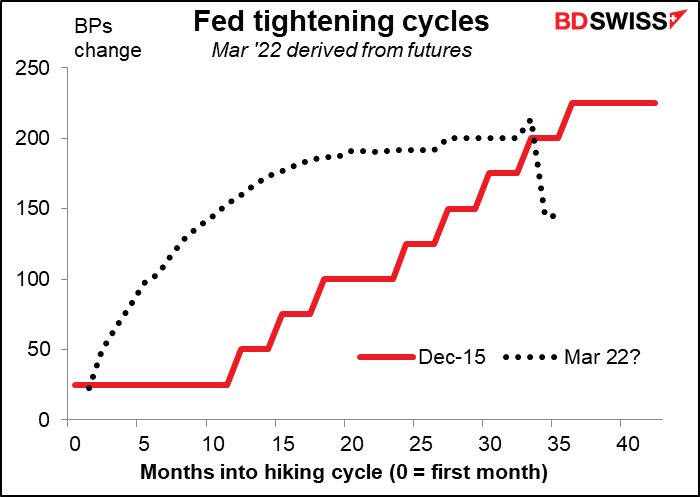 As for the Fed’s bloated balance sheet, only “a couple” of participants favored ending asset purchases early in January, and of course that didn’t happen. It is noticeable though that they discussed how ending purchases early might be used as a communication tool to “send an even stronger signal that the Committee was committed to bringing down inflation.” Perhaps they will send that signal after all by starting the hiking cycle with a 50 bps hike? In any case there was broader consensus that the process of winding down the balance sheet should begin “sometime later this year,” which would also be a lot faster than in the last hiking cycle.

The only other mystery to be cleared up then is why EUR was the worst-performing currency. That no doubt comes back to the Ukraine question. EUR/CHF was (sometimes) moving in line with the S&P 50 futures…

….and sometimes in line with USD/RUB 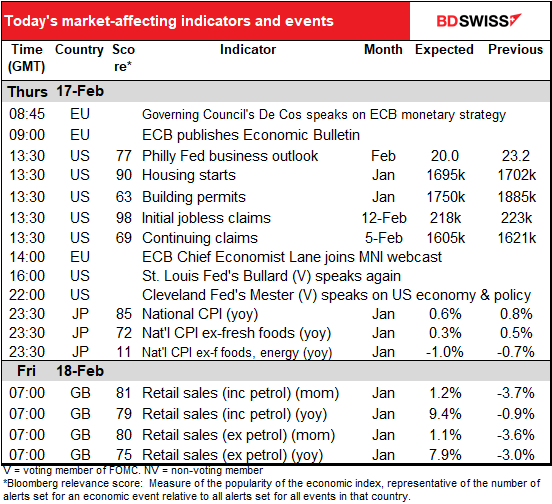 Not much happening during the European day. We can chill out, grab a coffee, read the papers, and try to figure out what’s happening in Ukraine.

There’s a whole bunch of data coming out at the US opening. The Philadelphia Fed business outlook is expected to fall slightly. But Tuesday’s Empire State manufacturing survey didn’t rise as much as expected (to 3.1 from -0.7, whereas 12.0 was expected) so it looks as if maybe things are weaker than economists thought. 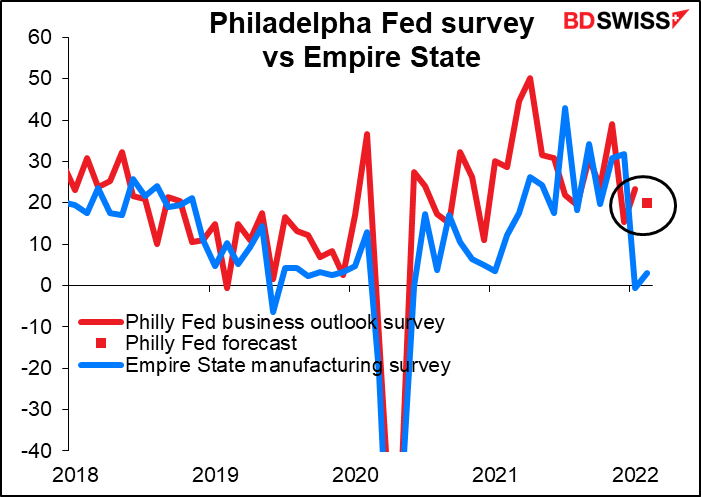 Although in fact there isn’t much of a connection between the month-to-month change in these two indices, even if they do track each other generally over time. 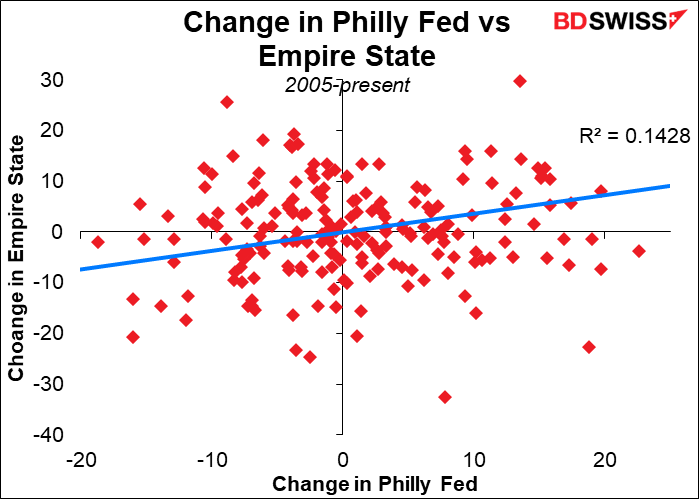 Housing starts are expected to be down 0.4% mom while building permits, which have surged ahead, are expected to fall by 7.2%. The small decline in starts may be due to the bad weather in much of the country during January. As such I think it may demonstrate how robust the housing market is, which is a good sign for the Fed – it means they can run down their mountain of mortgage-backed securities rapidly without throwing the US economy into disarray. USD+

Initial jobless claims are expected to decline further this week, That would be the fourth consecutive week of decline as the omicron-related surge in unemployment in January unwinds. This week is particularly important as it’s the survey week for the February employment data. That will be the last jobs report the Fed will have before it decides whether to embark on “lift-off” at its March 16th meeting. 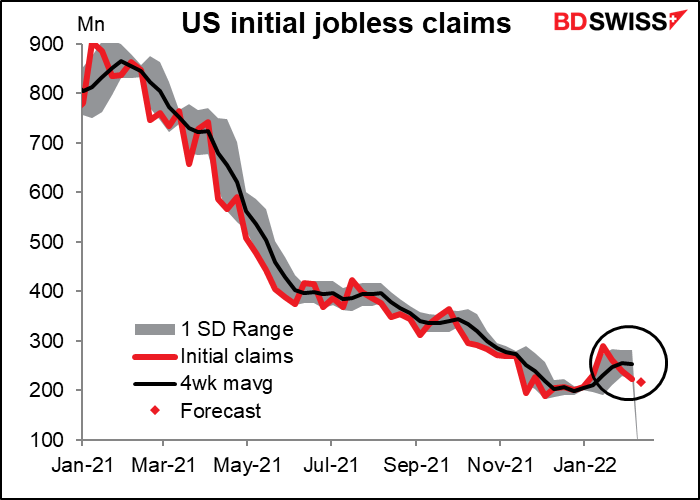 Overnight we get the astonishing Japan national consumer price index (CPI). Astonishing because while every other country is grappling with runaway inflation, Japan is still struggling to get its inflation rate up to 2%. Maybe the statistics are wrong? Maybe they’ve been making some error in the calculations for several decades? The fact is though that I’m renting an apartment for my daughter in Kyoto, where she goes to school, and it’s a nice place for something like JPY 80,000 a month. Find me any major city in Europe where you can get a small, centrally located one-bedroom apartment in a fairly new building for EUR 610 a month!

Anyway the Japanese national CPI isn’t so important for the markets because it tends to follow the Tokyo CPI, which comes out two weeks earlier. And like the Tokyo CPI, the national CPI is expected to show slowing inflation. Some of this is the effect of government policies, notably the “Go To Travel” plan, in which the government subsidized the price of hotels & transportation to encourage people to travel during the pandemic (to make up for the fact that they locked non-Japanese out of the country, thus freezing out not only some 32mn tourists a year but also students and even workers without permanent residency.) 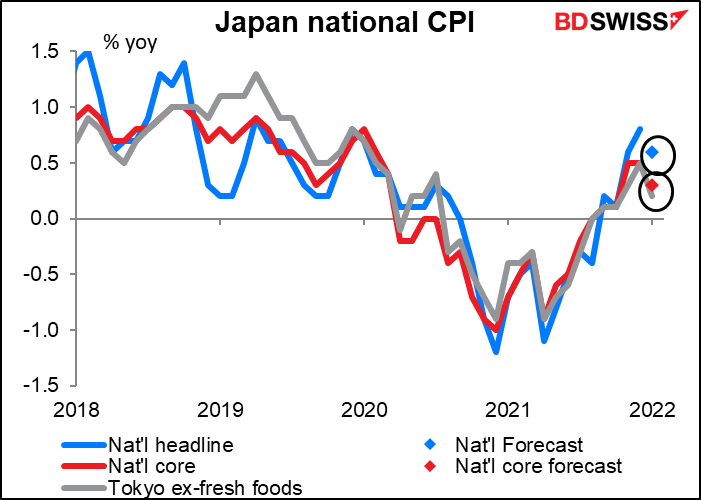 Still, the low inflation numbers despite sharply rising producer prices suggests it’s going to be a struggle for Japan to get its inflation up. That means the Bank of Japan is likely to stay on hold longer than other central banks and that JPY will continue to be used as a funding currency. JPY- 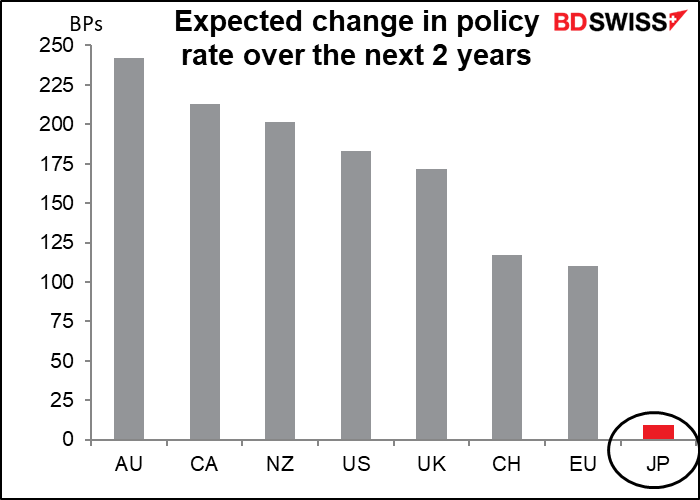 Then we just wait until the early European morning again and for Britain to release its retail sales. After December’s unexpectedly sharp drop, the high-frequency data now suggests a pickup in sales. British economic activity has been more resilient than many people expected as each successive wave of the virus has had less and less impact on the economy even though more and more people are affected. Case in point: GDP for December was expected to be down 0.5% mom but only fell 0.2% even though the government reimposed some lockdown measures.

In any event, a solid rebound in retail sales could confirm in peoples’ thinking the idea that the year is getting off to a fairly solid start. That would tend to be positive for sterling. 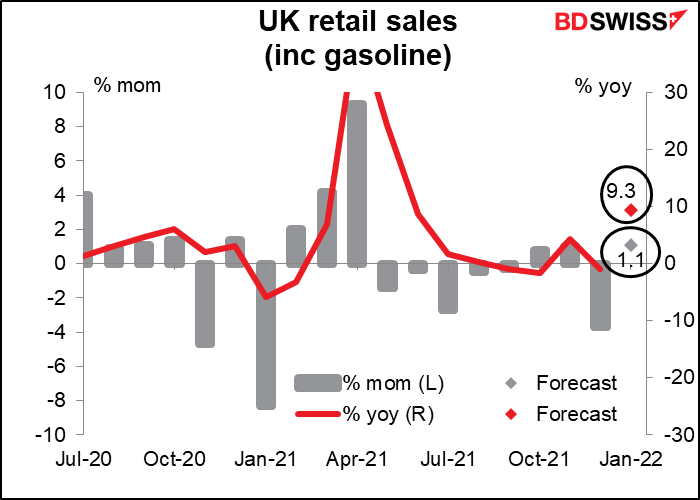 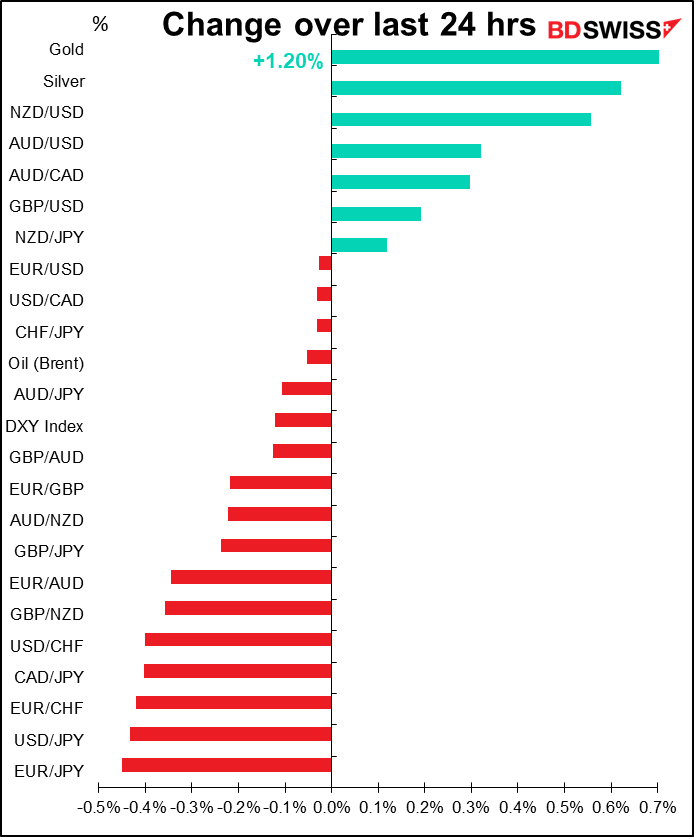