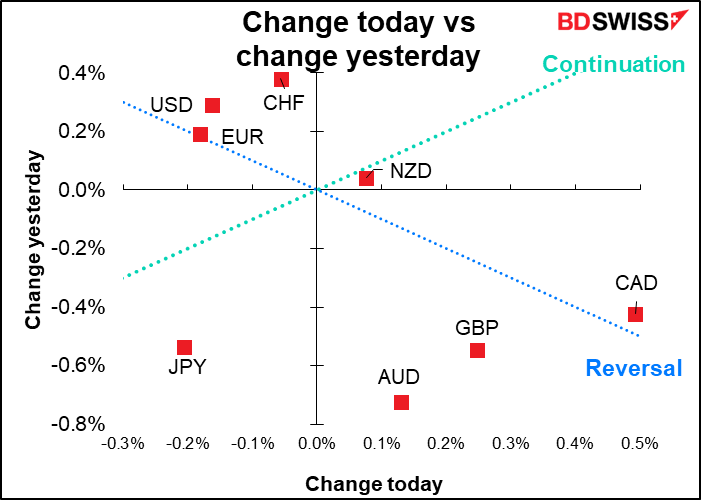 With the US on holiday, risk sentiment improved. Oil prices rebounded and with them, CAD appreciated (as did the other commodity currencies too).

The rise in GBP is surprising – or perhaps it just illuminates how monetary policy is dominating the market. The UK today is suffering through the first of three alternate day rail strikes, plus a Tube strike just in case you don’t take the train to work. The company is offering a 3% raise, the workers are demanding 7%-8% (vs inflation currently at 9%, forecast to go as high as 11%, so either way the workers would lose out). Nor are the rail workers an isolated case; some 3mn workers across different professions are said to be considering the dreaded “industrial action” (aka strikes) over pay and working conditions. On the other hand, ministers are seeking to hold public sector pay rises to 2%. You can easily see where this is headed.

This is exactly why the Bank of England (and other central banks) want to prevent inflation expectations from becoming “unanchored.” If people believe inflation is likely to remain high, they’ll demand wage increases that not only cover the inflation that they’ve seen so far but also that they expect in the future. Then companies have to raise their prices to cover those wage increases. Then you have a “wage-price spiral” that’s difficult to end. The UK seems to be at the start of this cycle. This may be what the Bank of England’s Monetary Policy Committee meant when they said “The Committee will be particularly alert to indications of more persistent inflationary pressures, and will if necessary act forcefully in response.” (emphasis added). The strike may therefore elicit a “forceful” response, which would be good for GBP.

Indeed, MPC member Catherine Mann (one of the three who voted to hike by 50 bps at the BoE meeting last week) said in a speech yesterday that “the incoming data on inflation show increasingly domestic embeddedness, persistence, and momentum”. Furthermore, she also warned about the risk of embedded domestic inflation being “further boosted by inflation imported via a Sterling depreciation.” She noted that “To stabilize prices and alleviate the inflationary pressure coming through the exchange rate, UK policymakers would need to roughly go along with the tightening from the US,” which hasn’t happened so far at all – the Fed has moved from 0.10% to 1.58% and is set to hike another 50-75 bps in a month, while the Bank of England has only moved from 0.10% to 1.25%.

Mann’s comments caused the gilts market to sell off sharply (yields to rise). 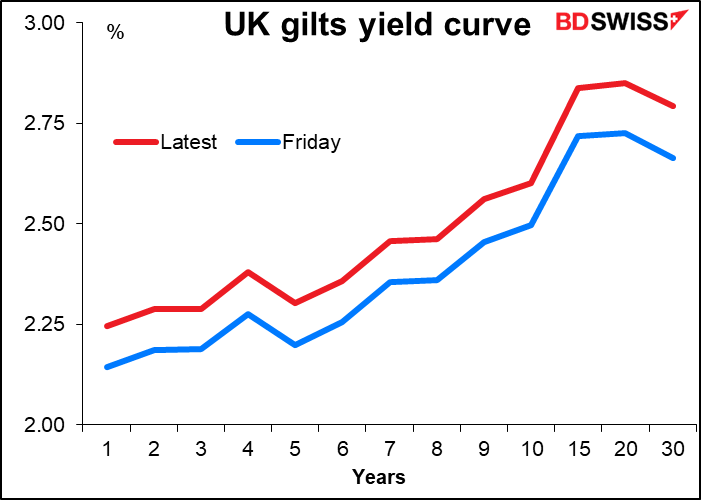 And the market is now pricing in not one, not two, but three consecutive 50 bps hikes. 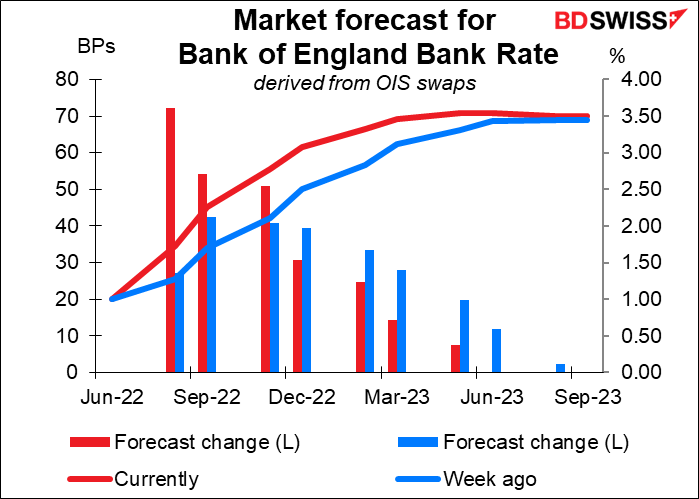 However, GBP fell as she began speaking and the text of the speech was released. I’m not sure why.

Appearing at a hearing at the European Parliament yesterday, ECB President Lagarde reiterated the ECB’s intentions to start hiking rates next month, and also gave some more details about their plans to deal with any potential fragmentation among Eurozone bond markets. (Remember the word “fragmentation” – you’re going to be hearing a lot about it in the near future.) She said that “we need to be absolutely certain” that monetary policy was being transmitted to the different Euro Area countries and argued that it was “right at the core of the mandate.” (The problem for the ECB is that if investors start worrying about the health of any particular bond market, then that market might start selling off and rates there won’t respond to ECB tightening or loosening. It therefore becomes difficult for the ECB to transmit its monetary policy to that country.)

The pledge to deal with fragmentation makes it easier for the ECB to raise rates because they can do so while keeping a particular eye on one or two troubled markets (Italy and Greece, to be specific). As a result, Eurozone bond yields moved higher and rate expectations shifted up a bit but it didn’t help EUR particularly.

Finally, the minutes of the recent Reserve Bank of Australia (RBA)  meeting released this morning showed that the RBA is learning toward more tightening in coming months as inflation is expected to rise to 7% by the end of the year owing to pandemic-related supply chain issues. It’s not expected to come back to the 2%-3% inflation target until next year. Meanwhile, RBA Governor Lowe said in a speech that rates were “still very low” but pushed back against expectations of any 75 bps rate hikes, thereby signaling a 25 bps or 50 bps hike at the July 5th meeting.

Rate expectations fell on the news, but that didn’t keep AUD from rising somewhat as risk sentiment improved. 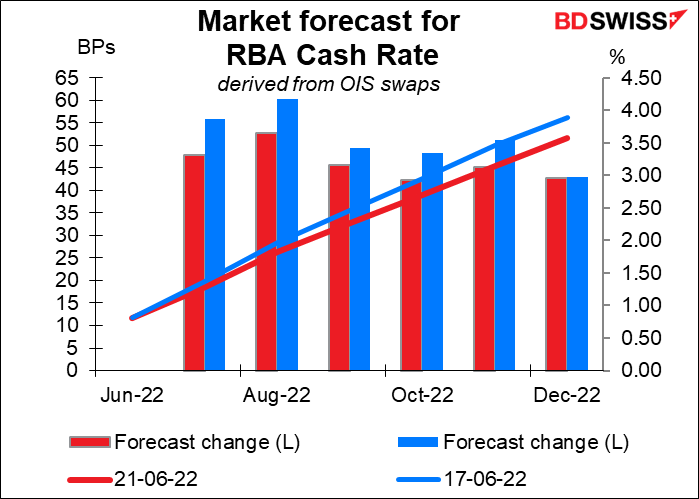 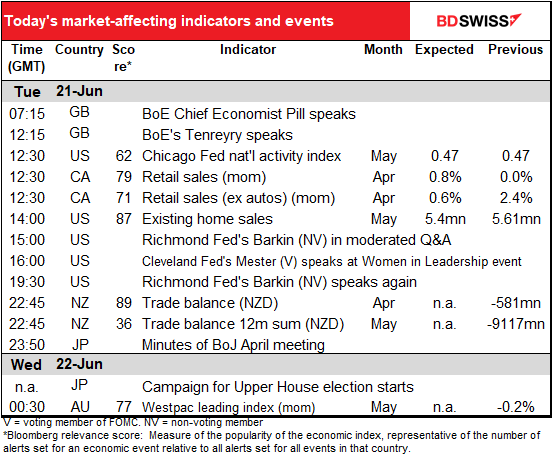 Another day with more speakers than indicators.

The Chicago Fed National Activity Index (CFNAI). The CFNAI is different from the other regional Fed indices, which gauge conditions in that Fed district. The CFNAI uses many previously released indicators to gauge overall economic activity and related inflationary pressure on a national basis, not regional. A positive number corresponds to growth above trend and a negative number, below trend. It’s expected to be unchanged at 0.47 ,which is also the three-month moving average. That would be pretty good considering the sharp drop in some of the other Fed surveys for that month, such as the Empire State manufacturing survey, which fell a massive 36.2 points during the month. Also given that the Atlanta Fed GDPNow estimate is for no GDP growth during Q2, an indication that there might be slightly above-trend growth during the month would be reassuring. USD+ 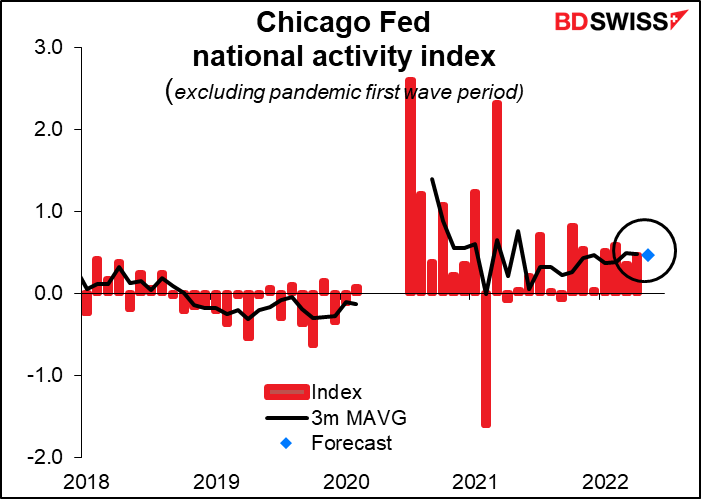 Canadian retail sales are expected to be up yet again, a bit less excluding autos than including autos. While a bit below trend, the continued growth in spending will only confirm the Bank of Canada’s view that “Canadian economic activity is strong and the economy is clearly operating in excess demand… With consumer spending in Canada remaining robust and exports anticipated to strengthen, growth in the second quarter is expected to be solid” and should keep the Bank on a tightening bias. CAD+ 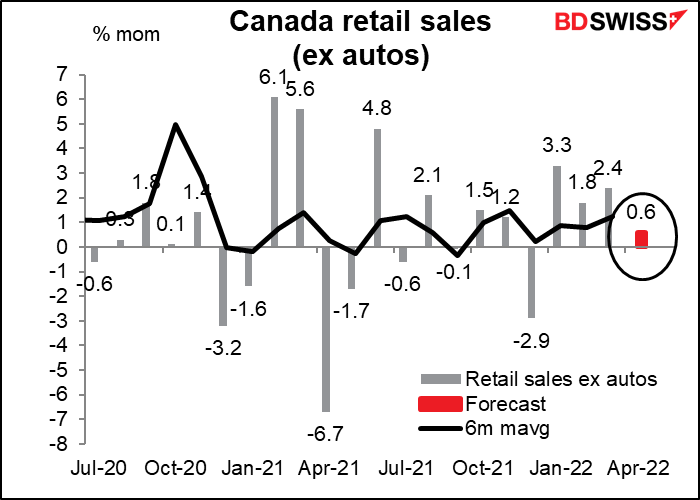 US existing home sales are expected to be down 3.7% mom. This will only confirm the slowdown in the housing market that we’ve seen in pending home sales (down six months in a row) and housing starts (plunging 14.4% mom during the month in question). By the way, Friday’s new home sales are expected to be up slightly, but that’s just an expected rebound from the nearly 17% mom decline the previous month (which was mostly due to builders holding houses off the market due to uncertainty about the cost of completing them). 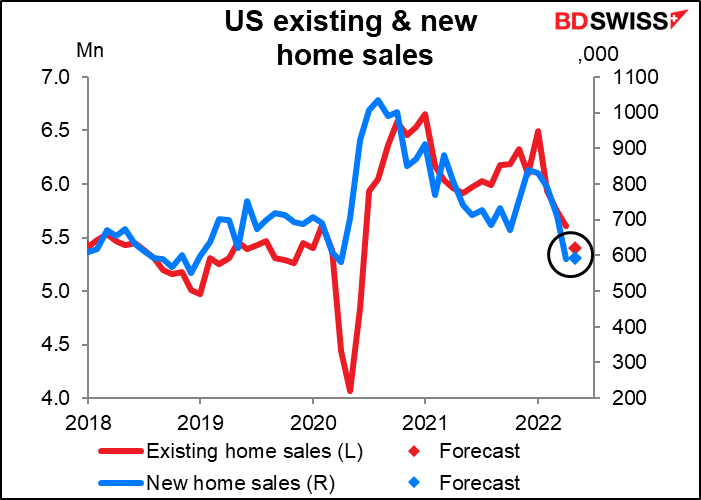 There are no forecasts for New Zealand trade data, but I still harbor feelings that trade should be important for FX from back in the 1980s, when it was, so here’s a graph of it. Note that the data isn’t seasonally adjusted so the 12m moving aveage is a better representation of what’s going on than the headline figure. 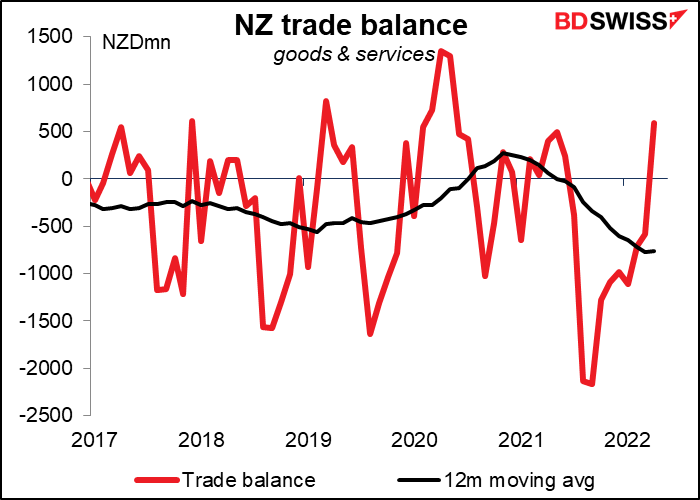 In Japan, an Upper House election is scheduled for July 10th. The campaigning period officially starts today. Polls show that the Kishida administration has relatively high approval ratings of 50%-70% (many Japanese administrations have staggered on with much, much lower approvals than that). The LDP and its coalition partner, Komeito, tend to do worse in Upper House elections than in those for the Lower House.

You might well ask, do Japanese politics have anything to do with the yen nowadays? I mean, most people can’t even name the Prime Minister of the country (probably because the median tenure of a Japanese PM during the post-war period has been about 1 ½ years, so why bother learning his name? He’ll be gone before you know it.) I think so.

For example, many people outside of the country (like me, for example) expected the BoJ to adjust its yield curve control (YCC) program last week because of the enormous amount of Japanese government bonds they had to buy to keep 10-year yields within their YCC ceiling of +0.25%. But one of the reasons we gaijin (foreigners) thought this was because we weren’t reading the local newspapers and so didn’t see what PM Kishida had said on the subject the day before the meeting. He said:

“I believe the question is if there is a need for the BoJ’s monetary policy to change direction as the yen weakens. While monetary policy can indeed have an impact on forex rates, it is also true that monetary policy has a significant impact on the business burdens of small and micro enterprises via interest rates. So, although forex rates represent an extremely important issue, my understanding is that the BoJ will make decisions regarding its monetary policy, taking into account the various impacts I just mentioned in a comprehensive manner. The specifics of its monetary policy are for the BoJ to decide, but from the government’s perspective, we expect the BoJ to continue its efforts to maintain the price stability target in a stable and sustainable manner.” (emphasis added)

In other words, no matter how much the BoJ may talk about the need “to pay due attention to developments in financial and foreign exchange markets…”, the government has decided that keeping rates low is more important than bolstering the currency. Kuroda’s stance has the authorities’ approval. This is why Japanese poitics are important for FX traders to watch. 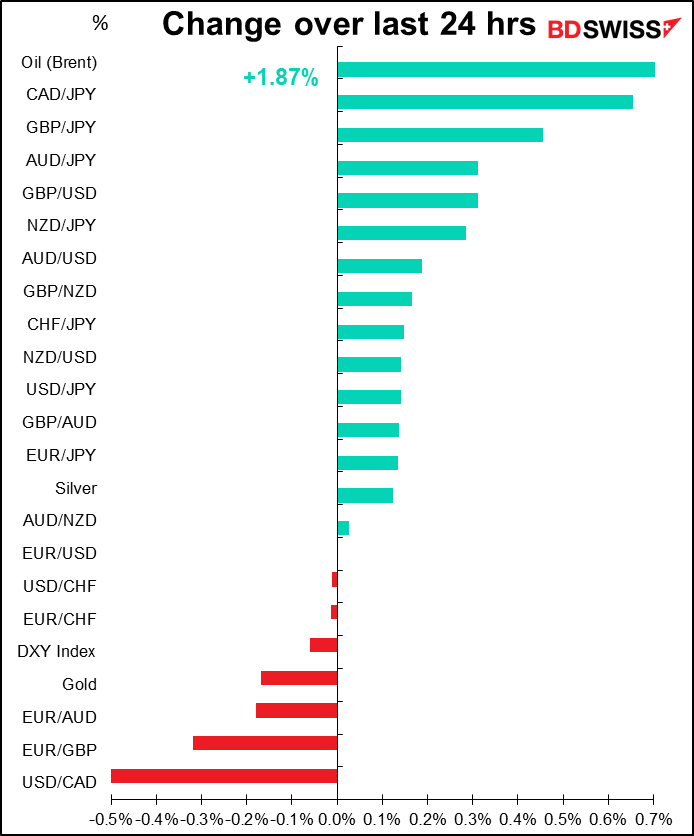