You are at:Home»MARKET PREVIEW»CHF Up as market re-evaluates Tightening prospects, AUD Down on growth Fears; Lagarde appearances 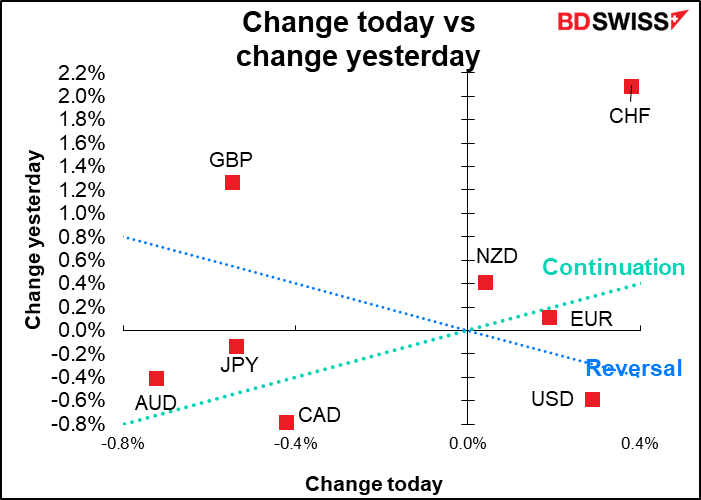 The FX market continues to re-evaluate the prospects for CHF now that the Swiss National Bank (SNB) has started hiking rates.

The market has repriced the expected course of three-month CHF rates. Investors now expect the SNB to hike faster & higher than they expected before. 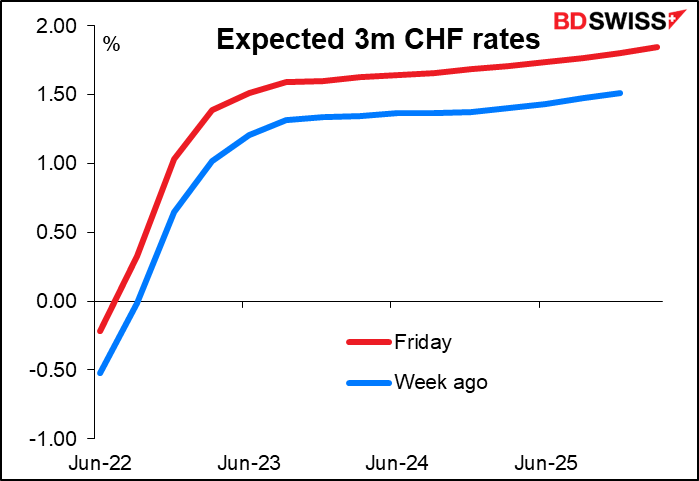 Because of that, the expected rate advantage that EUR holds over CHF has shrunk. This is supporting CHF today. 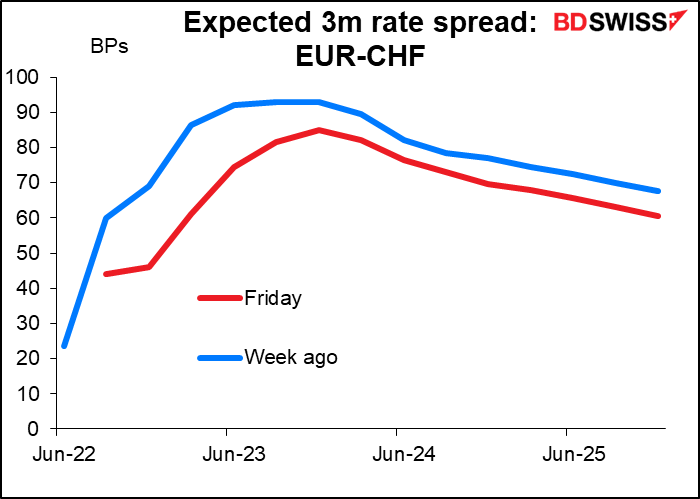 The Fench presidential election may also be a factor this morning. French President Macron’s Ensemble party lost control of the National Assembly after a strong performance by NUPES, a newly formed alliance of left-wing parties, and the far right, which performed much better than expected. Ensemble remains the largest party with 245 seats but that’s short of the 289 seats needed for a majority. Macron will now need to carry some other parties along if he’s to deliver on his agenda, especially on such controversial policies as pension reforms. It’s not going to be easy.

Elsewhere, commodity prices were falling on fears that the global trend toward higher interest rates will choke off growth. (That’s the whole point of raising rates, isn’t it? To bring demand into line with supply.) This is weighing on AUD this morning.

At first I thought there was something wrong with my spreadsheet because I’d never seen such enormous changes in positioning in a week before. The enormous shift from long 50.5k EUR contracts to short 6.0k – a huge $7.6bn move in one week! Similarly the shift in MXN. We don’t usually see moves like that, but remember these were the changes that took place the week of four central bank meetings, including the Fed hiking 75 bps.

Surprisingly though specs’ overall long USD position didn’t increase that much. That’s because while long EUR and MXN positions were eliminated, every other currency went against the dollar: speculators went long CAD and trimmed short positions in CHF, NZD, AUD, GBP, and especially JPY. It seems that they were taking profits in some of the shorts that had been profitable (especially JPY) while following the price action in EUR. 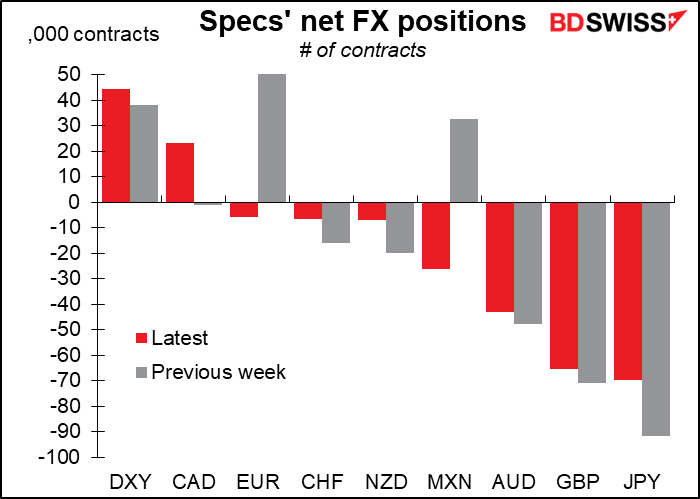 Hedge funds didn’t go along with the MXN selling – on the contrary they increased their longs there. They flipped several shorts to longs, including NZD, CAD, and CHF (good call!) while going short EUR. They too took some profits in JPY> 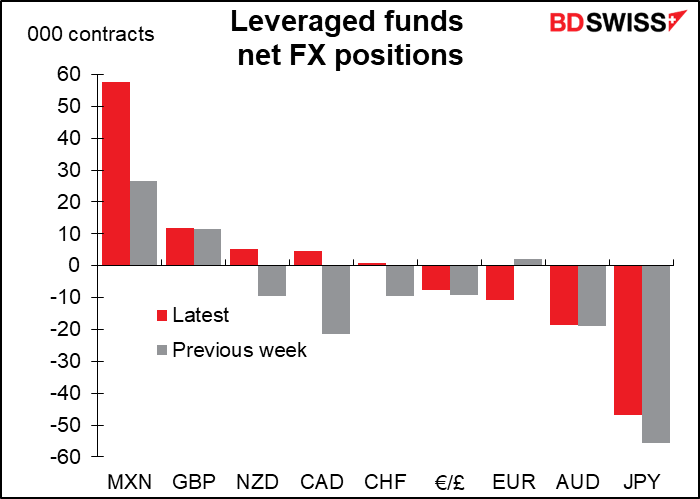 Retail traders trimmed their long EUR position but remained quite long overall. They flipped from a tiny bit long AUD to a tiny bit short. They increased their GBP shorts. 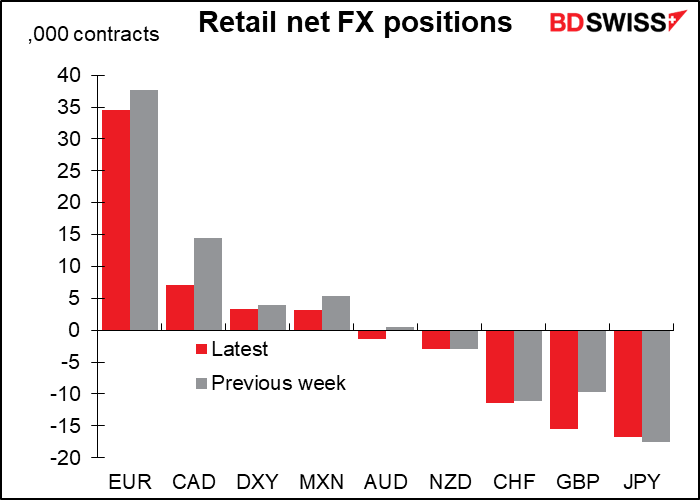 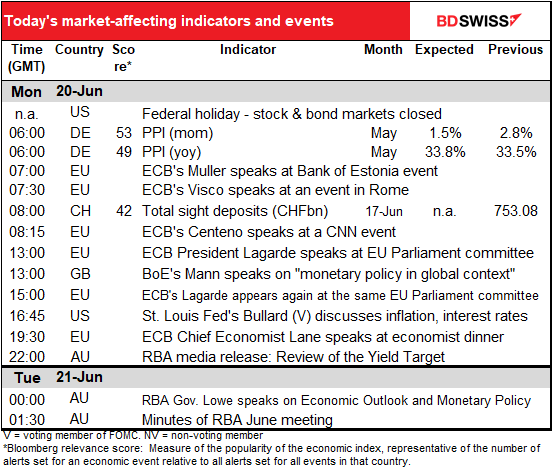 Lots of speeches today, not many indicators. It’s a federal holiday in the US today: Juneteenth. (Sunday was the holiday, but people get today off as a result.) The day marks the anniversary of the announcement of General Order No. 3 by Union Army General Gordon Granger on June 19, 1865, proclaiming freedom for enslaved people in Texas. By extension it commemorates the emancipation of enslaved African Americans. Last year was the first year it was a holiday. 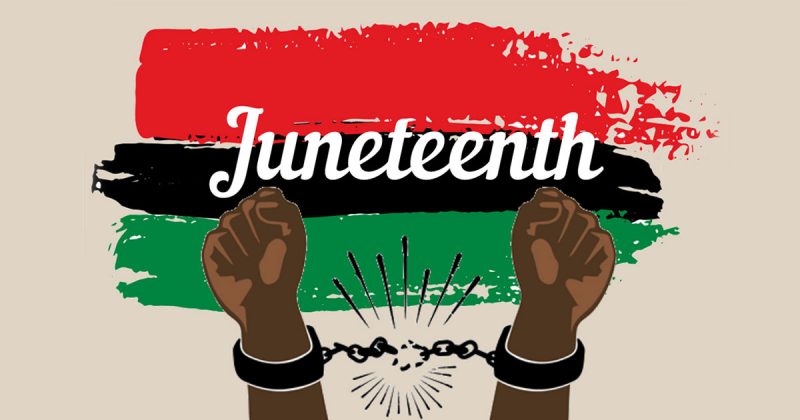 Swiss sight deposits have fallen for three weeks in a row even while EUR/CHF has been falling. Is this the Swiss National Bank (SNB)’s new policy at work? SNB President Jordan said last week, “If there were to be an excessive appreciation of the Swiss franc, we would be prepared to purchase foreign currency. If the Swiss franc were to weaken, however, we would also consider selling foreign currency.” Have they started already? Is EUR/CHF around 1.03-1.04 now considered too high? Tune in today! 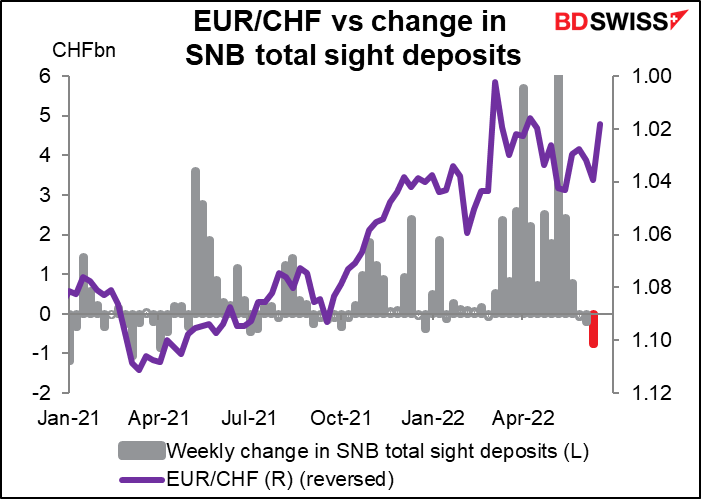 And that’s about it for indicators!

There are several points of interest from the Reserve Bank of Australia (RBA) overnight. First is “Media Release: Review of the Yield Target.” This is the outcome of an internal review that the RBA conducted into the events surrounding the messy abandoning of the three-year bond target in Nov. 2021.

A few hours later you can watch RBA Gov. Lowe speak on Economic Outlook and Monetary Policy if you’re awake. If you won’t be, you can probably get the gist of what he’s likely to say by reading the transcript of an interview he gave to the local prices on June 14th. I’d expect the tone of his speech to be hawkish, as the interview was.

Then a bit later, the minutes of the June 7th. RBA meeting will provide more details on the RBA’s decision to hike by 50bp, contrary to what most people in the market had expected (which was for 25 bps). Their options were for 25 bps, 40 bps or 50 bps. With the cash rate at 0.35%, a 40 bps hike would’ve brought it back to its customary quarter-point increments. The reason why they didn’t go for that will help shape expectations for what they’re likely to do in the future. Overall the message is probably hawkish and so is likely to be positive for AUD. 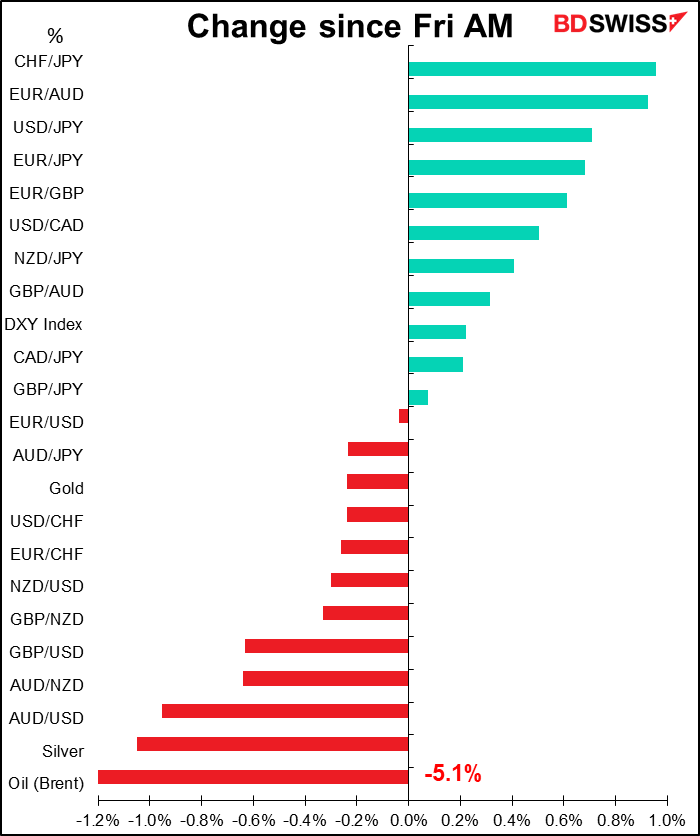