You are at:Home»MARKET PREVIEW»USD Up, NZD & JPY Down as risk Sentiment returns; CA CPI, Powell Testimony 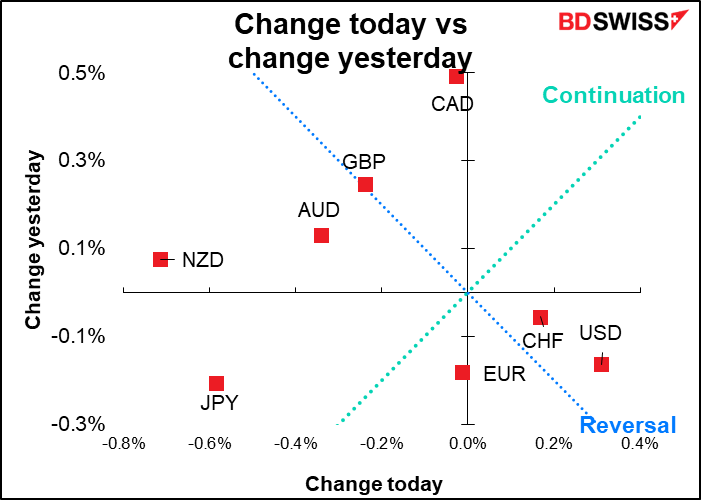 A more “risk-on” sentiment during the European and US days, with the Euro STOXX 600 index up 0.35% and the S&P 500  up 2.5%, with every sector higher on the day led by energy (+5.1%). But sentiment seems to have taken a downturn during the Asian day as the “demand destruction” narrative gains traction again. Oil is down, the MSCI Asia ex-Japan index is  -1.8%, and the S&P futures are -1.1% from Tuesday’s close.

The big question of the day is why is NZD the biggest loser? It seems to have been following risk sentiment down, but that doesn’t explain why it might do worse than some others, like AUD, which are also sensitive to risk sentiment.

There wasn’t that much news out of New Zealand overnight. The average price for whole milk powder fell 0.8% at the biweekly auction, which may have had some effect. The real decline set in with the results of the New Zealand trade data, which showed the deficit widening on a 12-month moving average basis (see table above).

The real anomaly I found for New Zealand though was the big drop in inflation expectations.

Why is this? I don’t know for sure. One possible explanation is a Bloomberg story on the risks to global housing markets as interest rates rise. The article identified New Zealand as the most overpriced housing market in the world.

In any case, rate expectations in New Zealand came off a bit and so it’s no surprise that NZD did as well. 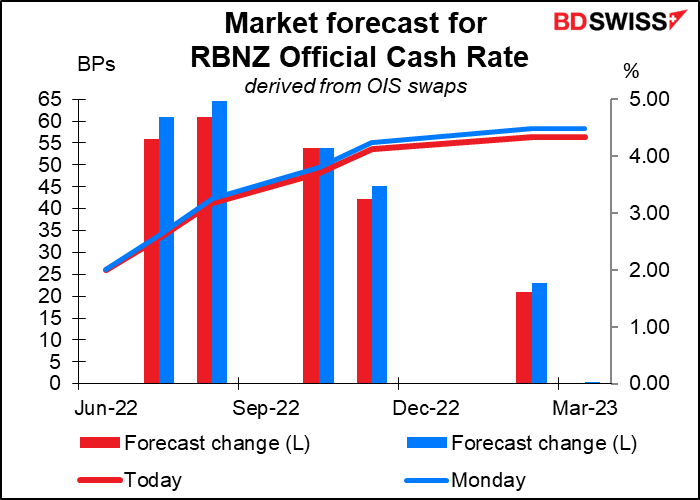 As for other currencies, I didn’t see anything unusual about US rate movements. Fed funds futures continued to predict higher rates later this year, but US two-year yields fell a little so nothing outstanding relative to other markets. I can only conclude that people are expecting some hawkish comments from Fed Chair Powell today (see below), as am I, and that was shoring up USD.

Meanwhile USD/JPY continued its seemingly inexorable rise (JPY falling). USD/JPY hit the highest level this century – the last time it was at this level was 1998. Japan PM Kishida yesterday repeated his comments about the need to maintain a loose monetary policy. “Under the current circumstances, the status quo on monetary policy must be maintained, although specific policy tools are up to the BoJ to decide,” Kishida said in a debate among the leaders of Japan’s political parties. “The Ministry of Finance, the Financial Services Agency and the Bank of Japan have confirmed the need for responding to currency moves appropriately if necessary. We must closely watch developments,” he said.

“Watch developments” in theory is a code phrase for “intervene in the FX market if necessary,” but so far they’ve shown no inclination to do anything but issue such verbal warnings. For example, Finance Minister Suzuki Tuesday said that “The government will closely liaise with the Bank of Japan while watching the exchange market and its impact on the economy and prices with even greater sense of urgency.” But since it’s the BoJ’s policy that’s causing the yen to weaken, they really can’t do anything about it. FX market intervention would only provide short-sellers with better entry points.

Some Japanese politicians have been taking a leaf from the US Republican Party’s playbook and started to refer to “Kishida inflation” as the media focus on rising prices, which are likely to be a major issue in the election for the Upper House that’s just beginning. Calling victory on the 2% inflation target and ending the extraordinary easing measures, as most other central banks have done, is the only way to stop the yen from weakening further, in my humble opinion. 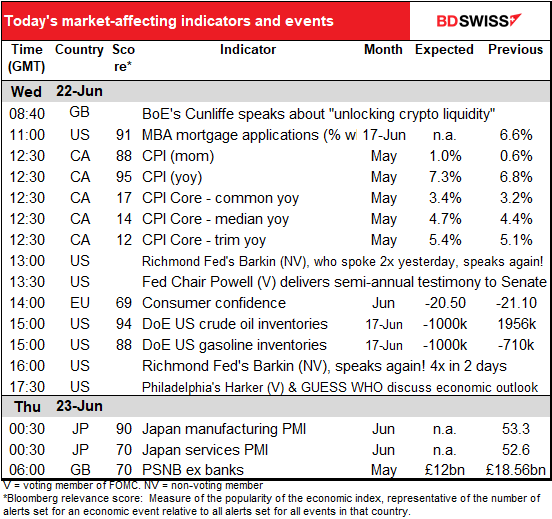 The Mortgage Bankers” Association mortgage applications have been falling recently – they’re down a little over 20% from the beginning of the year. Some of this is seasonal but it sure looks as if what started out as an exceptional year for the housing market is turning into a middle-of-the-road year. 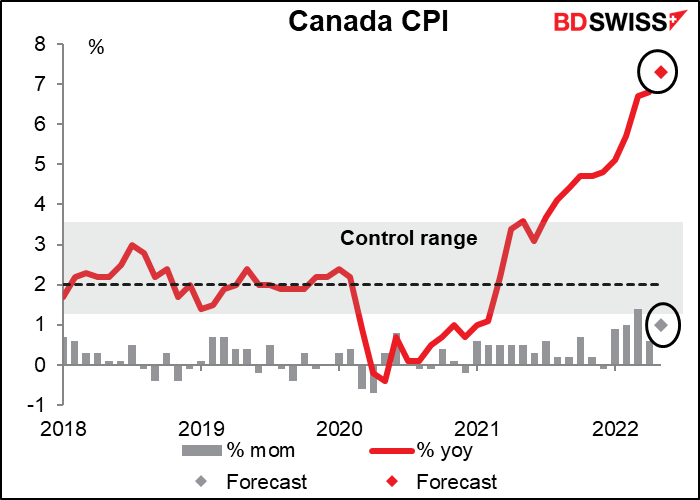 The three core measures are expected to average 4.5% yoy – that’s certainly going to ring some alarm bells in the Bank of Canada. 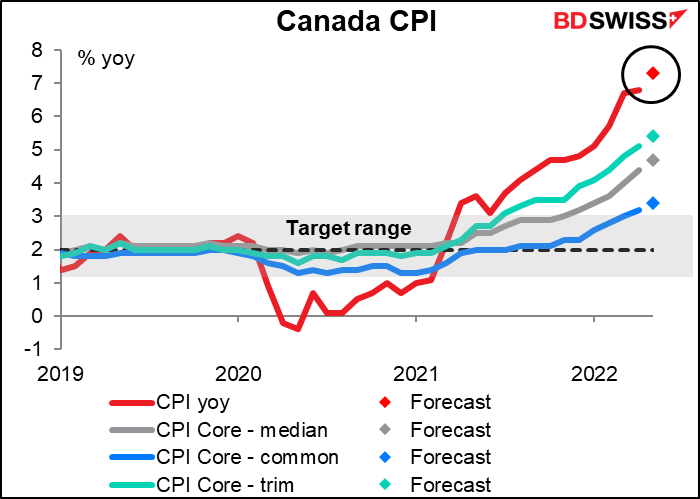 The market already sees a pretty good chance of a 75 bps hike at the July 13th Bank of Canada meeting. This could increase the odds further and thereby push CAD higher (USD/CAD lower). 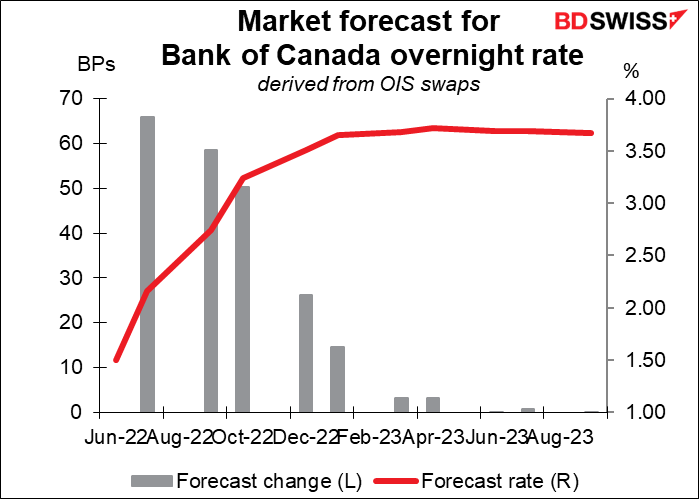 US Fed Chair Powell will testify to the Senate Banking Committee today, the first of his semi-annual monetary policy testimony  Given that the testimony is just a week after the meeting of the rate-setting Federal Open Market Committee (FOMC), I don’t expect any change in direction in his testimony. His statement before the meeting will no doubt just reiterate the main points of the FOMC statement and his press conference afterward, which include both the willingness to “do whatever is necessary” to bring inflation down and also the hope that that won’t include causing a recession (hahaha). In his press conference he indicated that the Committee will probably be deciding between 50 bps and 75 bps at the July meeting and that they would keep the pressure up until they see clear evidence that inflation is moderating. The Fed’s Monetary Policy Report, released five days ago, underscored the Fed’s “unconditional” commitment to restoring price stability.

The main point of interest will be the Q&A. Powell will no doubt be grilled on these points. Last time Republican Senators (I think it was) wanted to know if he was willing to channel his inner Paul Volcker (who allowed the fed funds rate to reach 22.4% in 1981 to combat inflation). He said yes then and I’m pretty sure he’ll say yes again this time. I would expect his testimony to be unremittingly hawkish and for USD to rise and stocks to fall as a result. You can watch it live if you want, here.

Eurozone consumer confidence isn’t that important for the markets but it will be slightly encouraging if it does improve, as the market consensus expects. Given the inexorable rise in energy prices and soaring inflation I’ll be surprised if it does, though. Then overnight we start the preliminary purchasing managers’ indices (PMIs) for the major industrial countries, starting with Japan. There aren’t any forecasts for the Japanese PMIs, perhaps because they don’t do a very good job of forecasting Japan’s GDP. They’re more closely watched for other countries, which we’ll discuss tomorrow. 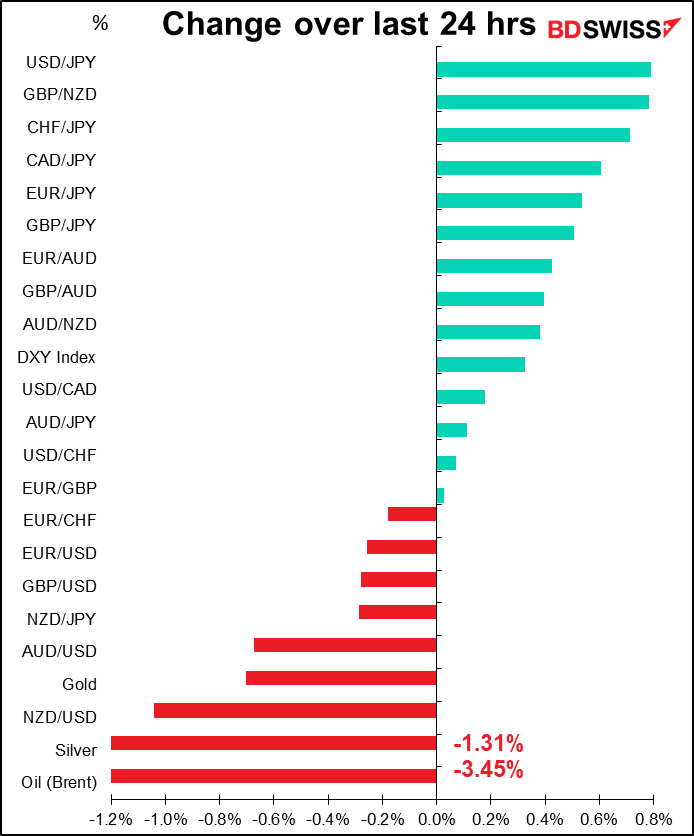 I’m introducing a new chart today. It’s like the one above except it’s adjusted for the usual volatility of the instrument. EG gold, silver, and oil are usually either at the top or bottom of the chart above every day because they tend to be more volatile than currency pairs. On the other hand, EUR/USD doesn’t see such wild swings and so it’s usually in the middle every day. This chart adjusts for that and tells us how the day’s movement of each pair compares to its usual movement over the last 90 trading days. The figures are given in terms of standard deviations, so 66% of the time they should fall between -1 and +1. Anything outside of that range is unusually volatile.