You are at:Home»Articles»Here’s Why These 4 Major Shares Gained +200% In the Last 3 Years

While global markets have enjoyed a healthy growth over the last couple of years there are some companies that have performed significantly better than others. In this article we explore the top 4 performing companies over the last 3 years and why they’ve managed to gain well over 200% in value. 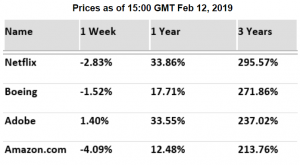 Amazon has gone from strength to strength it appears almost since its inception and if it hadn’t been for Jeff Benzos’s divorce from MacKenzie in early 2019, AMZN would have probably number one on this list. Who or what is behind Amazon’s immense success? Amazon is no short of merits, from arguably having the World’s best CEO, to maintaining optimal customer value, innovating with new products and services as well as maintaining a steady long term growth.

No.3 Adobe +237% (since Feb 12, 2016)
It’s not hard to guess why Adobe has made the list of the best performing shares. The creative and document services company offers an assortment of media software and is admittedly full of positive catalysts. In 2012, when Adobe first announced it switched from a software-sales licensing model to a monthly subscription-based model for Adobe Creative Cloud (CC), Wall Street was not sure as to how this radical approach would affect its share price. Fast forward to today and this may have been Adobe’s best decision to date!

No.2 Boeing +271% (since Feb 12, 2016)
On a long term basis, airplane giant Boeing Co. (BA) has demonstrated some compelling business fundamentals. Boeing emerged in the last year as a stronger airplane maker than its European archrival Airbus, while its joint venture with French aerospace firm Safran SA in 2018 has enabled the company to use profits from record jet sales in 2017 to transition into other lucrative aerospace segments. The company’s strongest ace in the last couple of years is that its Defense business has been absolutely booming under Trump administration. Boeing’s defense business, which represents about 22% of annual sales, has caught a massive tailwind from the growing U.S. defense budget

No.1 Netflix +295% (since Feb 12, 2016)
Streaming giant Netflix (NFLX) has been one of the most volatile and highest earning shares over the last decade, adding a massive 295% in the last 3 years, over 3,000% over five years, and a boggling 18,000% over the last ten years. So what is the secret behind the Netflix phenomenon? To start with, Netflix has practically pioneered the streaming services and has managed to beat back challenges by big-name companies like Blockbuster and Walmart. What is more, Netflix continues to innovate, moving from DVD businesses to pure streaming. More importantly however, the streaming giant is currently a purely digital service which means it can expand far, wide and very, very fast. Currently, Netflix is literally headed for world domination, covering more than 190 countries worldwide.

You can find and trade all of the above mentioned assets on BDSwiss Forex/CFD platforms.