You are at:Home»Articles»Will We See Another U.K. Election and How Will the GBP be Affected?

1. Will We See Another U.K. Election and How Will the GBP be Affected?

European bourses traded mostly flat on Friday after U.K. Prime Minister Boris Johnson announced his plans to push for a fresh general election in December. In order to proceed with his plan, Johnson will need to secure the Labour’s support in order to win a 2/3 majority vote in the Parliament. The sterling fell back to the post-2016 Brexit vote low and is currently in need to see where this general election issue will lead, we may see more losses if Boris Johnson manages to push for another election.

In the US, earnings continue to fall under consensus, with the latest being that Amazon’s third-quarter earnings fell short of Wallstreet expectations, driving its stock down as much as 9% in after-hours trading. AMZN shares are set to open with a downward gap.

The central bank president oversaw his last monetary policy meeting yesterday, during which he kept beating the drum of negative rates which impacted the EUR negatively. Meanwhile, some members of the bank’s Governing Council believe the bank’s easy-money policies have created asset bubbles and set the stage for a financial crisis. Christine Lagarde will be sworn in as Draghi’s successor on Tuesday. 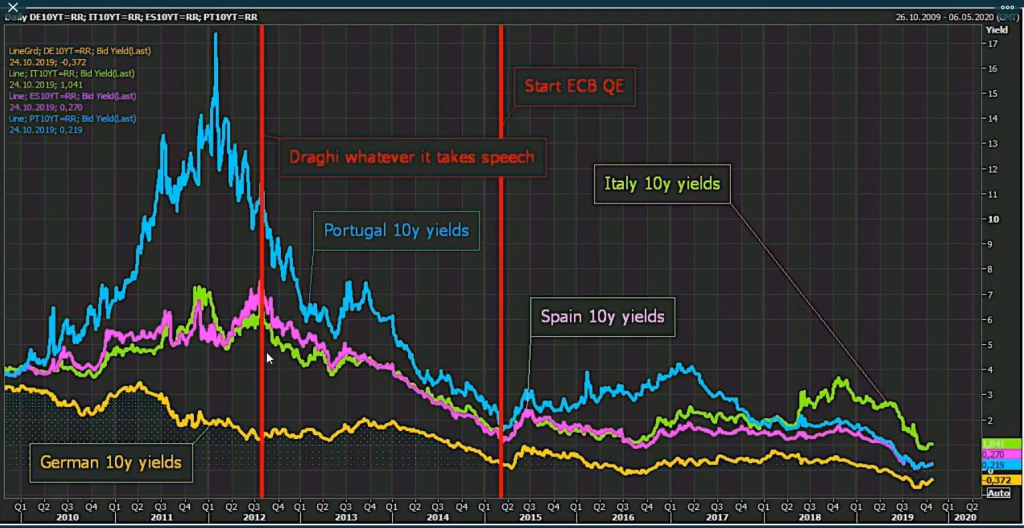 Meanwhile, the USD gained on losses in the Pound and the EUR. However, the Fed continues to be in a liquidity crunch and no one knows what is happening yet which is a big alarm bell. The EUR meanwhile pushed lower on Mario Draghi’s post ECB meeting statements but was later supported by a stable IFO report out of Germany.

Oil prices dipped slightly this morning after three days of consecutive gains, as gloomy economic growth forecasts renewed concerns over the outlook for demand. Meanwhile, safe-haven spot gold (XAU/USD) is back above the $1,500 despite no risk-off trading going on really, and therefore supports my notion of Gold being a good buy on the dip in the current environment.

You can find and trade CFDs on all of the above-mentioned assets on BDSwiss Forex/CFD platforms.