You are at:Home»MARKET PREVIEW»CAD Up, JPY Down as risk Sentiment Improves; EU CPI, Conference Board consumer Sentiment 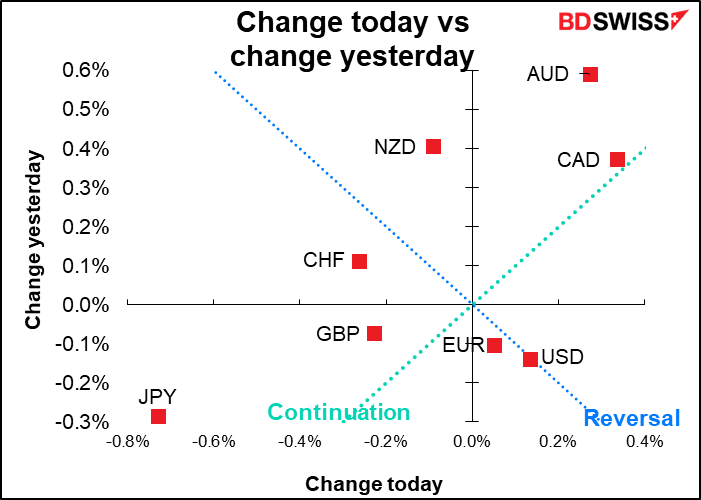 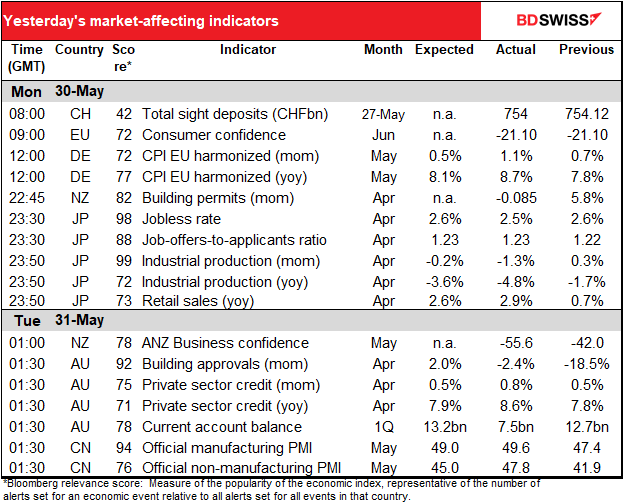 It’s “risk-on” again although I’m puzzled as to what exactly has caused the change in heart. Sometimes the markets act like a school of fish: everyone swimming in one direction and then wham! For whatever reason, they all shift direction. Some people are pointing to the improvement in China’s COVID-19 situation as being behind the rebound. The country is down to 3,555 cases a day from a recent peak of 68,706 (7-day average). This improvement should allow Chinese manufacturing and shipping to get back to normal, alleviating many of the supply chain problems and helping to dampen inflation while also increasing global activity. 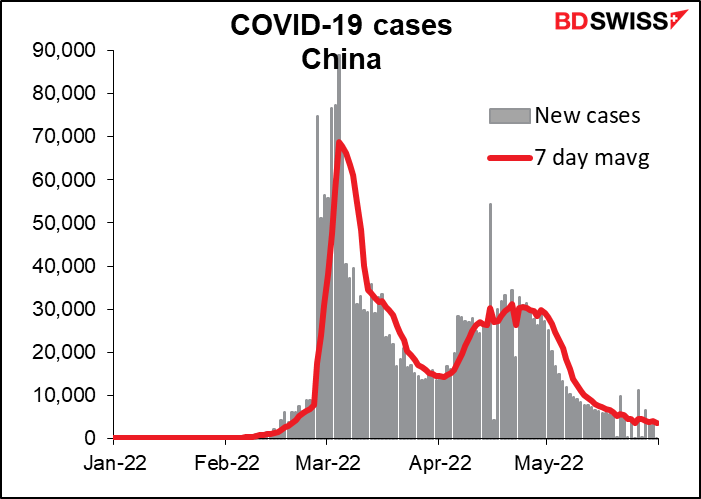 On the other hand, one might have thought that yesterday’s German consumer price index (CPI), soaring much more than was expected (see table above), would’ve caused a shift in the opposite direction, at least in the EU, but no, the Euro Stoxx 600 was up 0.6% (Euro Stoxx 50 +0.9%). The figure, the highest since the 1950s, exceeded every estimate on Bloomberg. Spain too saw its harmonized index of consumer prices rise further to 8.5% yoy from 8.3%.

The inflation overshoot sets the stage for a change in policy at next Thursday’s European Central Bank (ECB) meeting. The Governing Council will almost certainly vote to end its quantitative easing (QT) program followed by a rate hike at the next meeting in July. Will the hike be 25 bps or 50 bps? ECB President Lagarde has been saying rate hikes will be “gradual,” meaning 25 bps, but numbers like this are likely to increase the pressure for 50 bps. ECB Chief Economist Lane said in an interview yesterday that “Normalisation has a natural focus on moving in units of 25 basis points, so increases of 25 basis points in the July and September meetings are a benchmark pace.” He said that “Any discussion about other moves would have to make the case for moving more strongly than this…The discussion will be had, but our current assessment of the situation… calls for a gradual approach to normalisation.”

Meanwhile, interest rates jumped everywhere. Even Japanese yields rose fractionally. So this can’t be a relief rally due to expectations of less tightening to come in the future. 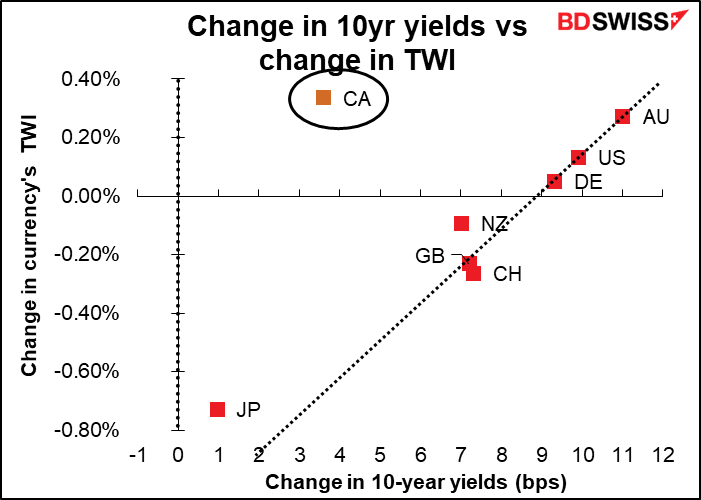 It wasn’t due to any move at the short end of the yield curve either – on the contrary, CAD lagged behind all the others except for JPY.

Oil was indeed higher yesterday, but CAD strength preceded the move up in oil.

Nor was it due to the general risk environment, if we can use the S&P mini futures as a proxy for that. (The futures were trading yesterday even though the cash market was closed.)

There was a slight increase in rate expectations in Canada – maybe people are taking positions ahead of tomorrow’s Bank of Canada meeting. It’s expected to deliver the second of what’s forecast to be three 50 bps hikes in a row. Looking at the market forecast for the September meeting, there seems to be some speculation that the Bank might decide to make it four-in-a-row. I’d like to think it’s because the government yesterday announced a complete freeze on handgun ownership, but that’s probably not a major market concern. (For more such unusual relationships, see the fascinating website Spurious Correlations.)

Getting back to the oil market, Brent was up $3 or 2.6% to $123.34 this morning. Part of the rise is probably due to optimism about China again, but also there’s finally some movement in Europe toward embargoing Russian oil. Following an extraordinary European Council summit yesterday, EU leaders have agreed to ban Russian oil imports that come by sea. The move gets around objections by landlocked Hungary, which imports its Russian oil by pipeline. (Such EU decisions have to be unanimous.) The ban will block more than two-thirds of Russian oil imports to the EU and so will be an important move to deprive Russia of financing. Moreover, Germany and Poland have volunteered to wind down their own pipeline imports by the end of this year.

One often-ignored fact: Russia not only exports oil but also exports a lot of refined products too. EG in 2020 Russia exported some 1.2mn barrels a day of refined products to Europe, including about 10% of its total supply of diesel fuel. This is one reason why prices of petroleum products have increased by far more than prices of crude oil. Refineries can only process just so much oil, and furthermore they’re designed to work with specific kinds of oil. Therefore even if a country can get its hands on enough oil, there’s no guarantee that it can convert it into the need amounts of usable products. It’s not just an oil shortage, it’s a refining shortage too. The shortage of refining capacity is going to keep upward retail energy prices unusually high regardless of the oil supply problem, and an embargo against Russian refined oil prices – which I assume today’s measure includes – will only make this worse. 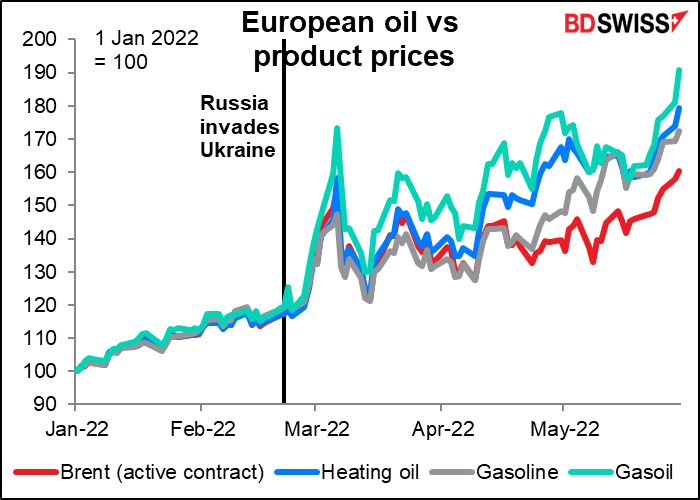 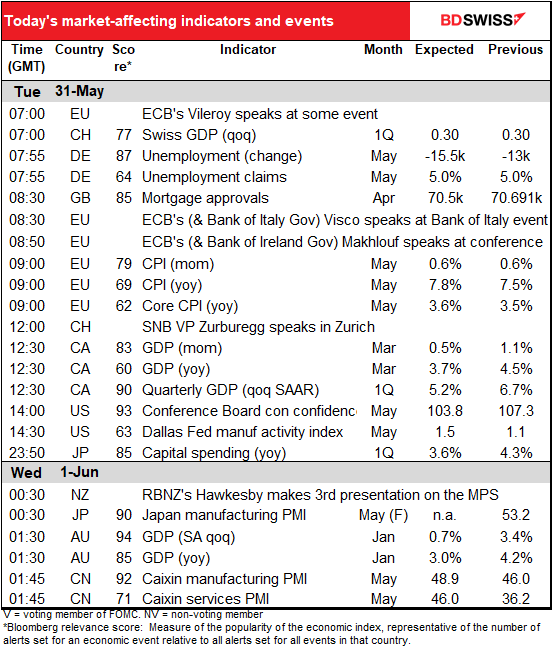 The European day starts with Swiss GDP. It’s expected to show the same modest increase that it showed in Q4 last year. But growth is expected to accelerate in future quarters, presumably as global economic activity picks up. I wonder though how higher prices for petroleum products will weigh on Switzerland’s important chemical industry. 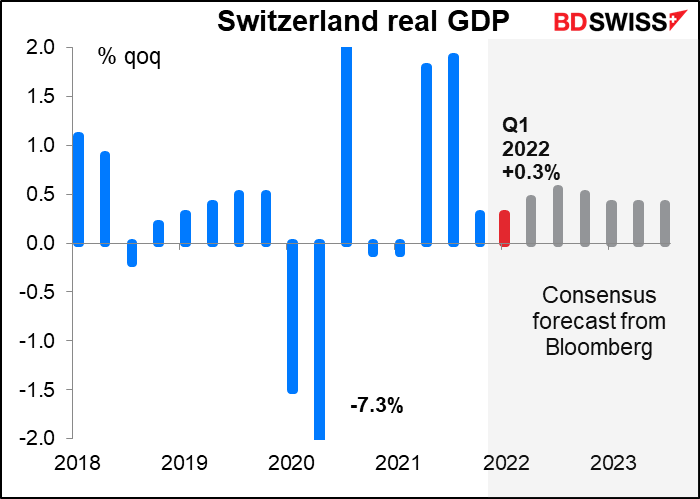 Then comes German unemployment data. The unemployment rate is expected to stay at 5.0% for the third month in a row, while the number of unemployed persons is forecast to drop by 15k. Oddly enough these were the same forecasts as last month (and they were pretty good forecasts last month – the unemployment rate was spot on while the number of employed fell by 13k.) Maybe economists just thought “well it worked last month, maybe it’ll work this month too.”  In any case the European Central Bank (ECB) doesn’t have a “dual mandate” that makes it responsive to employment so unless the figures suggest some major change in the economy – which these forecasts don’t imply — I wouldn’t think they’d have much impact on EUR. 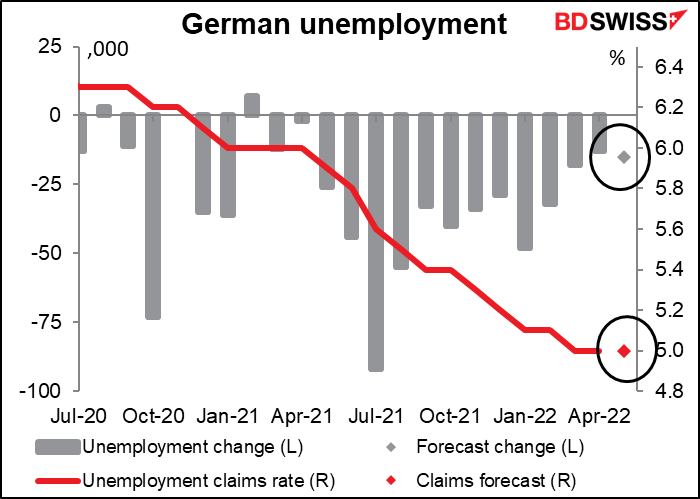 UK mortgage approvals are expected to be effectively unchanged. This is about the only noteworthy UK indicator out this week and yet I don’t expect it to make much of a splash in the market – unchanged rarely does. Then we come to the Eurozone harmonized index of consumer prices (HICP), aka the CPI. It’s expected to continue its steady rise higher and higher. It’s already too high for the European Central Bank (ECB) – this further rise is likely to convince the hawks that more aggressive tightening is necessary. EUR+ Canada’s Q1 GDP will be an important data point in tomorrow’s discussion at the Bank of Canada.

The March figure is expected to show solid growth from manufacturing and construction, partially offset by a decline in wholesale trade. 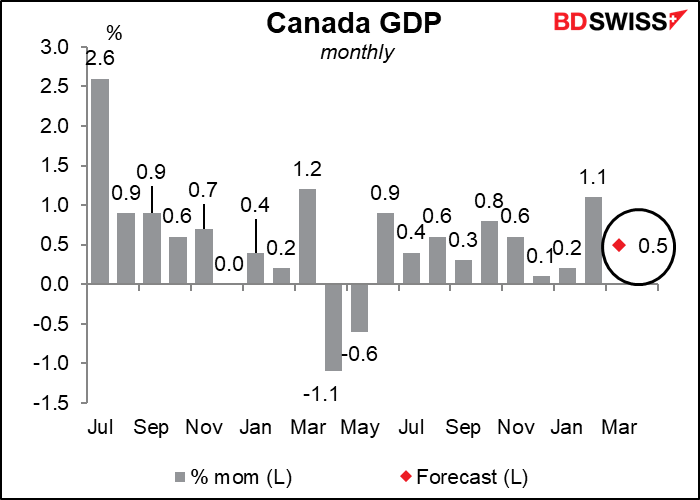 The quarterly figure is forecast to be up 5.2% on a qoq annualized basis. This is far above the Bank of Canada’s forecast in the April Monetary Policy Report, which was for only +3.0% qoq SAAR. Even that gain they said was “a stronger‑than‑potential pace…amid elevated supply disruptions.”

The figure is likely to solidify the Governing Council’s view that the Canadian economy is “moving into excess demand” and that further tightening of monetary policy is essential. The market is pricing in a chance of a more than 50 bps hike at Wednesday’s Bank of Canada meeting, although at the moment not a single economist polled by Bloomberg is predicting that (28 of the 29 are forecasting a 50 bps hike, one is forecasting only 25 bps but he’s located in Bangkok so maybe not the person following Canada the closest.) While I too think 75 bps might be extreme, the GDP figure could increase speculation about it and thereby be positive for CAD. 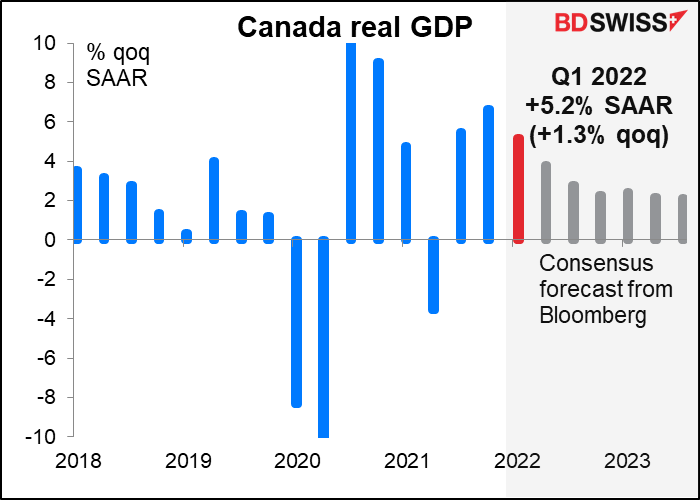 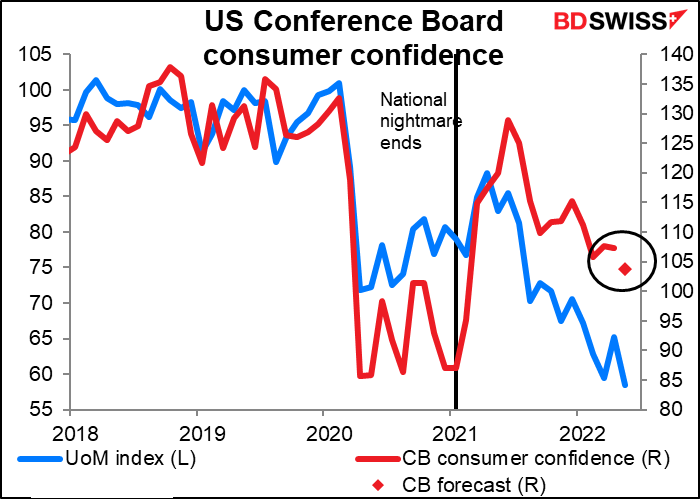 Although this indicator has a very high Bloomberg relevance score, it doesn’t seem to have that large or consistent an impact on the dollar. The statistics for EUR/USD are even worse. (Note: the one-hour figure is somewhat distorted by a large move in the dollar in November last year, upper left-hand corner in this graph. But even eliminating that figure does little to improve the statistics.) Overnight we get Japan’s capital spending data. I’m including a graph because of the high Bloomberg relevance score but I’d bet you can largely ignore it if you want. 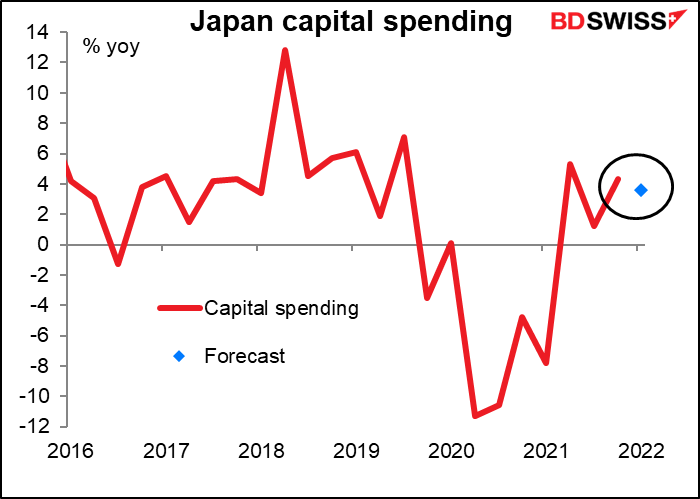 Then Japan will start the parade of manufacturing purchasing managers’ indices (PMIs), the final ones for those countries that have preliminary ones and the one-and-only for the rest of the countries. This will be a major feature of Wednesday’s market.

Australia releases its Q1 GDP. As I said in my world-renown Weekly Outlook, it’s expected to be somewhat sluggish, thanks to the omicron wave and severe flooding in parts of the country. It therefore probably won’t be seen as a precursor to weaker growth for 2022 as a whole.

The market’s focus will be on the various wage and price indicators in the report. Reserve Bank of Australia (RBA) Gov. Lowe specifically highlighted the national accounts measure of labor costs in his press conference following the May rate hike. (“So it’s a very clear message coming through all these channels that labour costs are on the move. I think in time, we’ll see that in both the Wage Price Index and in the measure of labour costs from the National Accounts.”) The wage price index rose only 0.7% qoq in Q1 (vs +0.8% expected). A stronger signal from the national accounts could boost the case for a 40 bps hike in the RBA’s cash rate at its June 7th meeting, as the market had been anticipating until recently (now pared down to 30 bps). That would probably be positive for AUD. 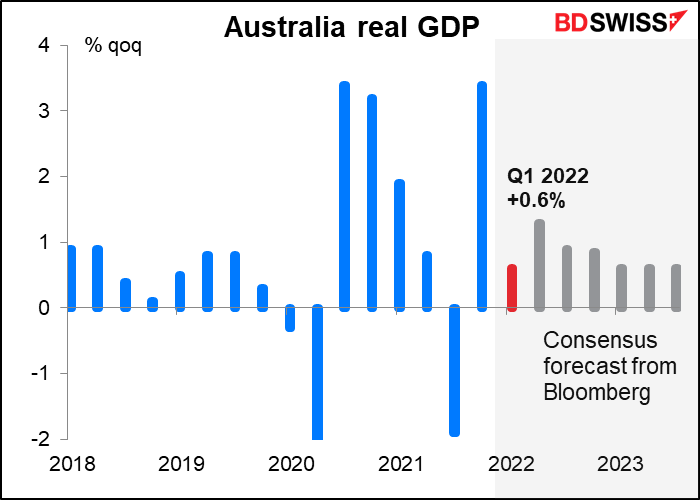 The Caixin/Markit China PMIs are expected to show dramatic gains. The service-sector PMI in particular is forecast to recover 10 points from its steep decline. Nonetheless both are forecast to show a continued contraction in demand, just not as big a contraction as last month. 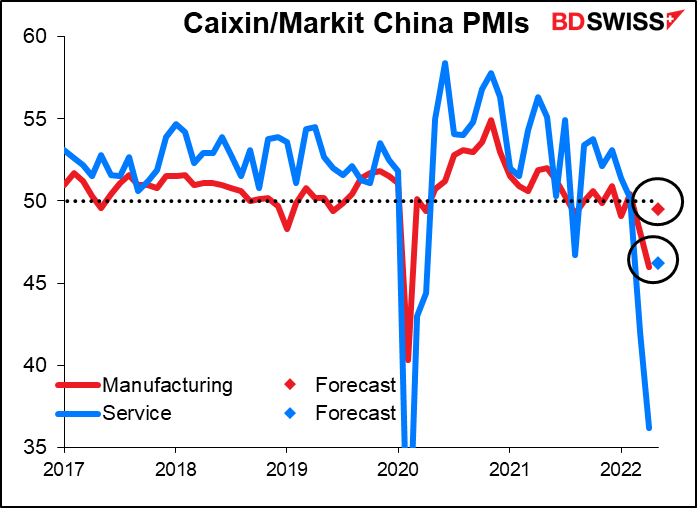