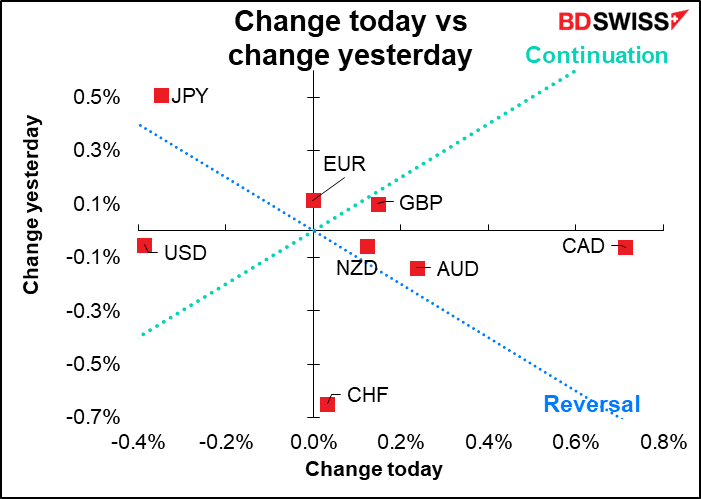 CAD was the biggest gainer on the day, but that was due to the rise in oil prices. USD/CAD and oil moved virtually in lockstep (well, more like a couple dancing, USD/CAD being the woman, who has to dance backward).

Oil prices rose ahead of the weekly inventory data from the American Petroleum Institute (API). In the event the API  announced yet another weekly drawdown of 1.077mn barrels during the latest week. This is a bit below (or above? How should I express this since it’s a negative number? Technically it’s higher than, if you think of it as being on a graph) the market forecast of -1.85mn bbl. 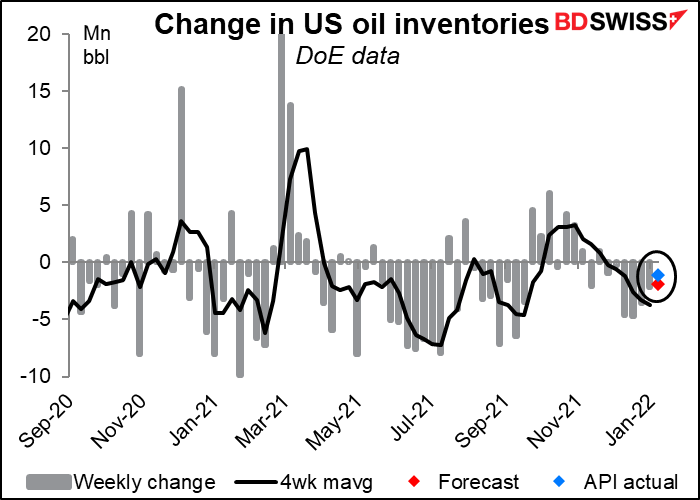 The API also announced a further decline in inventories at the main distribution center at Cushing, Oklahoma. Inventories there are getting near the minimum required level of 20mn barrels needed for the center to function properly. 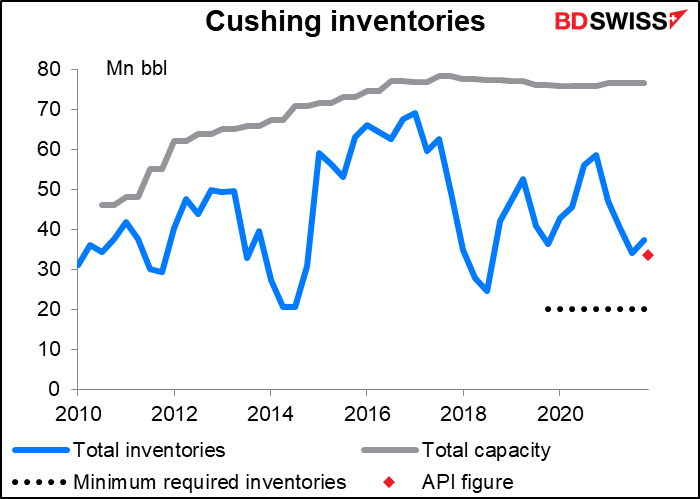 The real shocker though was (were?) the huge rise in gasoline inventories, which soared 10.9mn bbl. In data going back to 1990 this has only been equaled or exceeded once, in May 1993 (11.465 bbl). It also follows last week’s enormous build of 10.128mn bbl, which is now the 3rd largest increase on record (assuming today’s Dept of Energy figure matches the API data). 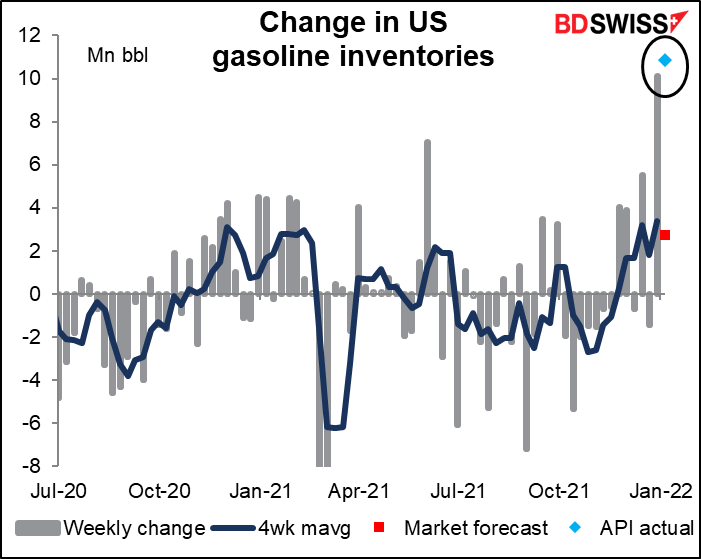 Gasoline inventories are now at the top end of the range for this time of year. 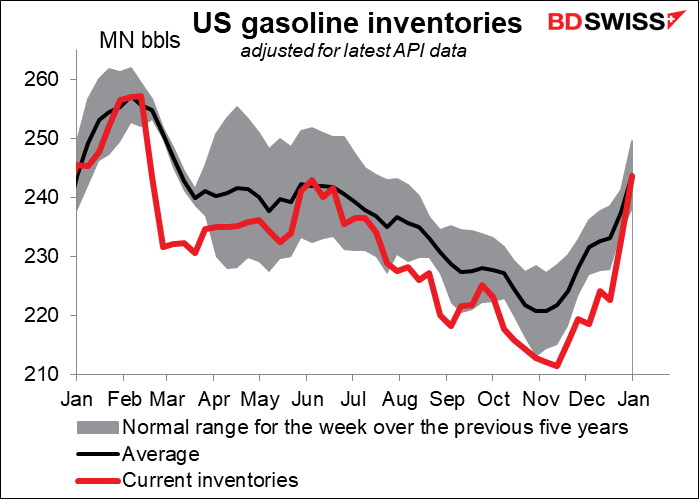 The “yes, but” data canceled each other out and oil prices were stable afterward.

The movement of the dollar was fascinating (at least to people like me, who live and breathe FX – maybe not to everyone). Why was the US currency down when Fed Chair Powell vowed to take action against inflation? Grilled by the Senate Finance Committee as part of his reappointment as Fed Chair, Powell said, “If we see inflation persisting at high levels longer than expected, if we have to raise interest rates more over time, we will.” He stressed that there was no contradiction between the determination to fight inflation and the Fed’s requirement to strive for “maximum employment,” because “high inflation is a severe threat to the achievement of maximum employment.” That is, if the Fed allows inflation to get entrenched they’ll have to raise rates much much higher and cause a recession, which will be really bad for employment. (Back in the 1980s the fed funds rate got up to 22%!!!)

Powell didn’t say much about the timing or speed at which the Fed would run down its balance sheet, because that hasn’t been decided yet. “The committee hasn’t made any decisions about the timing of any of that — I think we’re going to have to be both humble and a bit nimble.” But his comments made it seem likely that quantitative tightening (QT) would start this year.

Maybe it’s the dollar behaving like a “safe-haven” currency. That would explain why it and JPY were down on a day when equity markets are a sea of green. 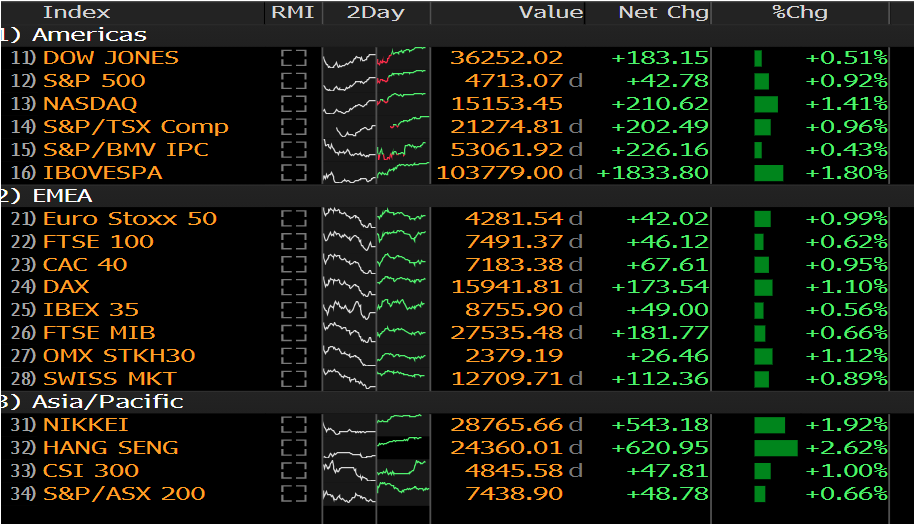 Or maybe just that the possible hikes in interest rates are all fully discounted already. If so, that would affect how the dollar reacts to today’s US consumer price index (see below). The bond market’s reaction to Powell’s comments indicates that that might be the case; bond yields fell in response, including even at the short end (2yr yields were down 1.2 bps), which would be the most affected by a change in monetary policy. 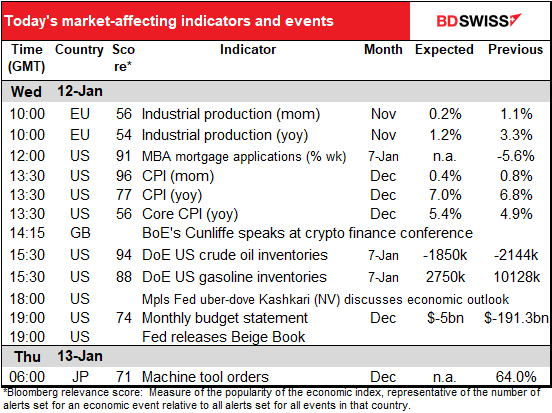 Eurozone industrial production has slowed to almost no growth at all over the last six months. The index was at 102.6 in October and 102.4 in March. If today’s forecast is accurate, it’ll rise to 102.8, which isn’t that much better and would still be -0.4% below the pre-pandemic level. 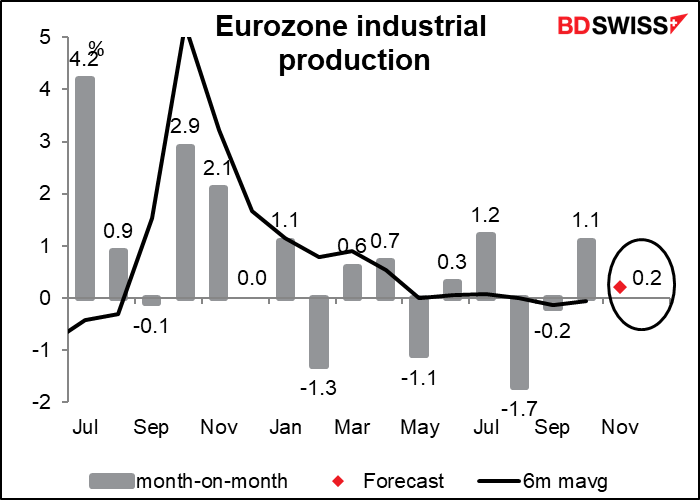 Having said that, it beats Japan and the UK and isn’t that far behind the US. And that’s with the largest economy, Germany, lagging far behind. So I think it’s a pretty good result, although I wouldn’t expect today’s indicator to spark any enthusiasm either way for EUR. 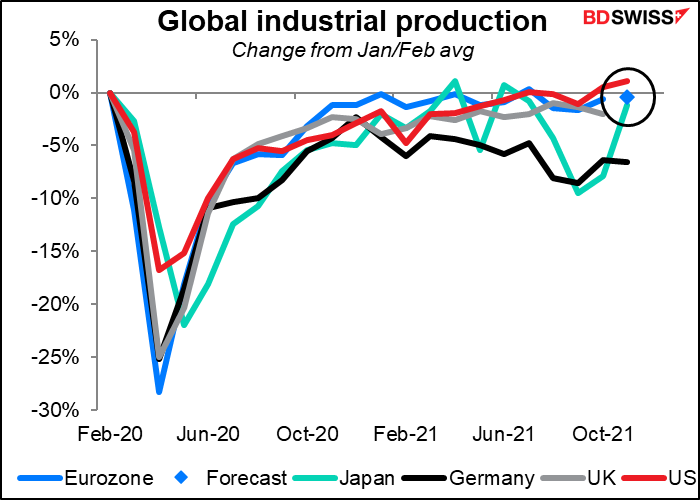 Next up is the highlight of the week insofar as indicators are concerned, the US consumer price index (CPI). The CPI isn’t the inflation gauge that the Fed targets –that’s the personal consumption expenditure (PCE) deflator, or more accurately, the core PCE deflator – but the market pays more attention to the CPI than to the PCE deflators. The headline CPI mom change has a stellar Bloomberg relevance index of 96.1 and the core index 76.9, whereas the highest-ranked PCE deflator is the mom PCE core deflator with a measly 60.1 followed by the headline with a ridiculously low 18.9. That could be because people understand the CPI better than they understand the PCE deflators, or maybe it’s just because the CPI comes out two weeks or so before the PCE deflators and they’re pretty well correlated, so the former is a good early proxy for the latter (although the CPI is more volatile than the PCE deflator).

The headline rate is expected to rise further to an astonishing 7.0% yoy, while the core rate is forecast to hit 5.4%. 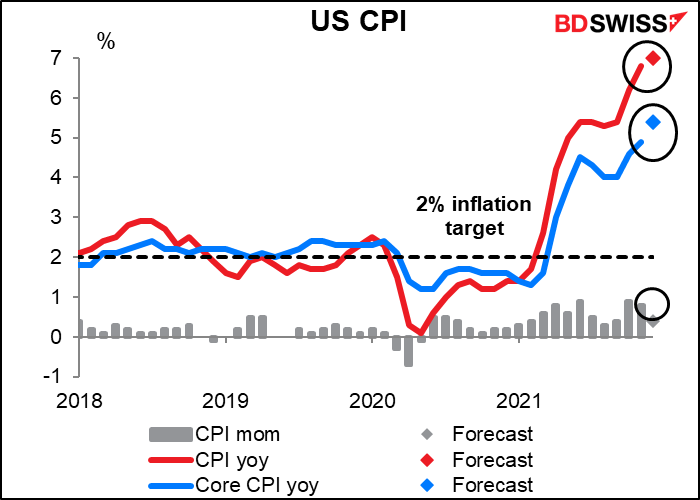 Furthermore, despite all the talk about higher inflation being “transitory” (a word that Fed Chair Powell has “retired”), we aren’t seeing much of that in the figures. If we take the change in the index over the last three months and annualize it, it shows inflation still rising, especially on a core basis. That’s not what we want to see. 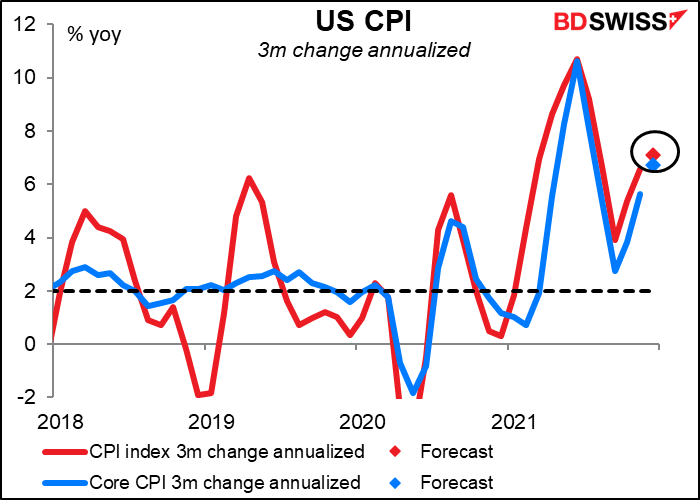 These figures could cause investors to increase the odds of a March rate hike, but since that’s already seen as a 75% probability, I’m not sure it would make much of a difference to the dollar. On the other hand, a hike at the Jan. 26th meeting is pretty much impossible. 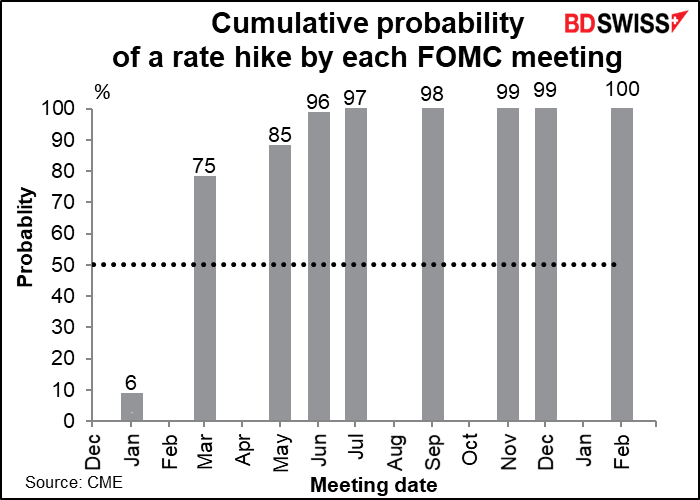 However it could affect the market’s view of how many rate hikes are likely this year. At the moment, people think four or more hikes are more likely than three (which is what the FOMC has forecast in its “dot plot.”) A higher-than-expected CPI could increase the likelihood of four or more hikes, which might be beneficial for the dollar. On the other hand, if the CPI misses estimates it might reduce the odds of more hikes.

So far this year the CPI has beat estimates seven times, missed estimates once, and matched estimates three times. 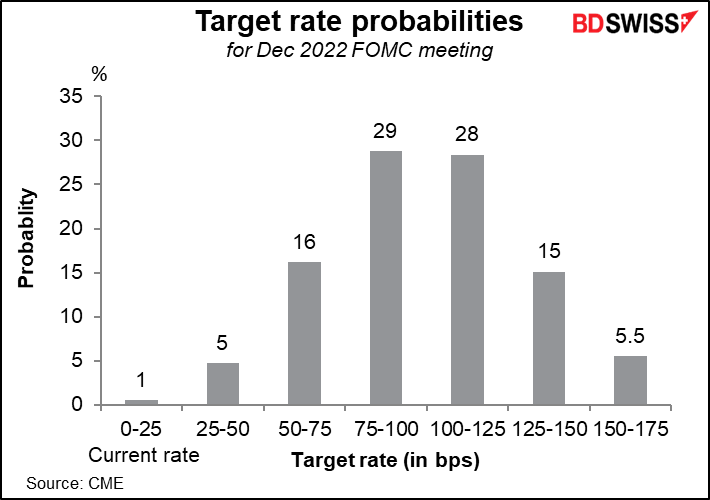 Later in the day, the Fed releases the “Summary of Commentary on Current Economic Conditions,” aka The Beige Book as always two weeks before the next FOMC meeting. It’s significant for the market because the first paragraph of the statement following each FOMC meeting tends to mirror the tone of the Beige Book’s characterization of the economy. The book doesn’t have any number attached to it that quantifies its contents, but many research firms do calculate a “Beige Book index” by counting how many times various words appear, such as “uncertain” or “inflation” or “bottleneck.” In any case, the book is largely anecdotal so you’ll just have to watch the headlines as they come out. 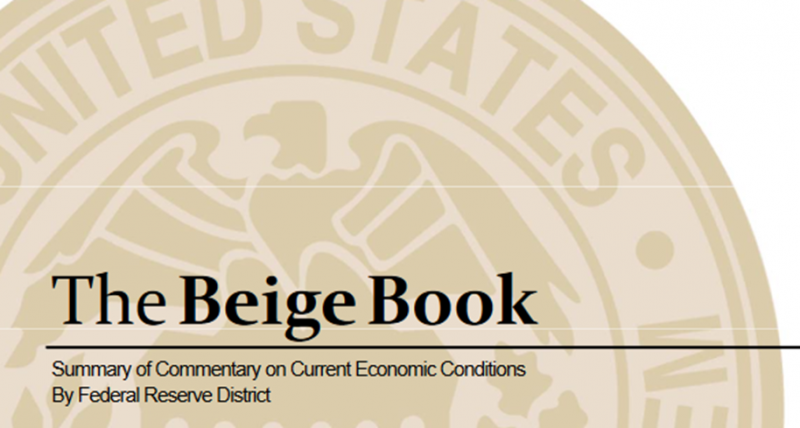 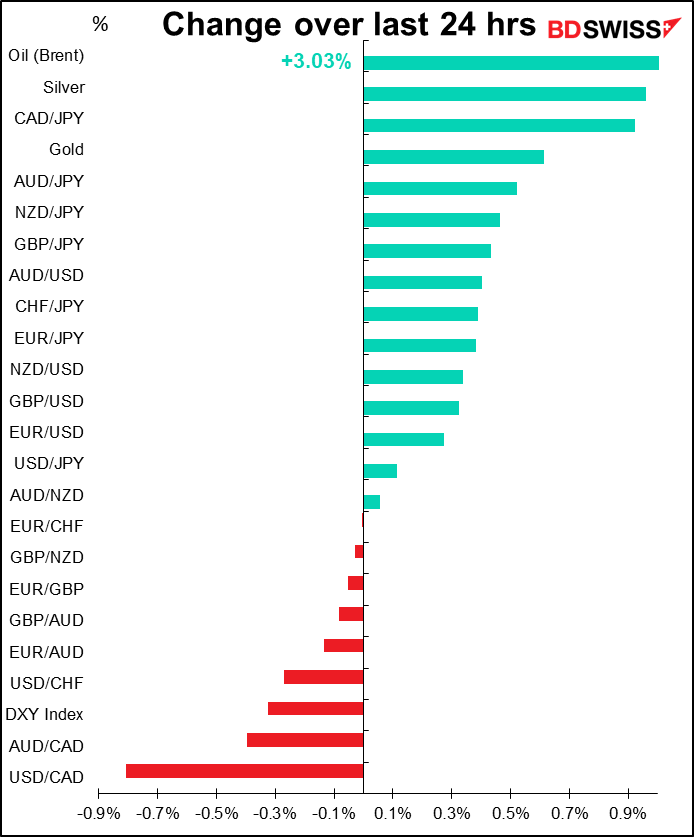