You are at:Home»MARKET PREVIEW»AUD up, safe-haven CHF & USD Down as sentiment Recovers; US housing starts, UK CPI (tomorrow) 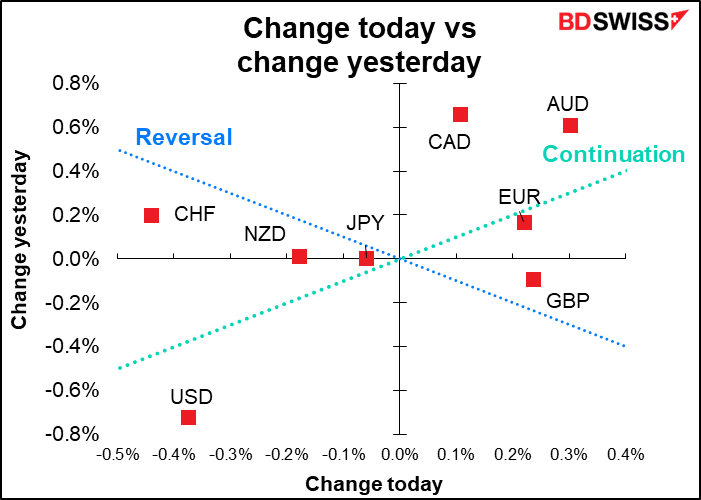 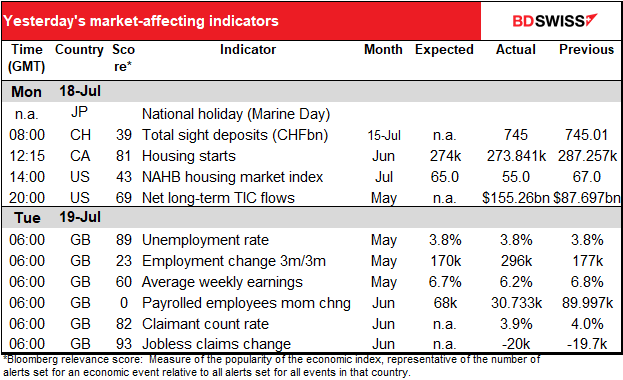 Risk appetite generally returned, pushing commodity currencies higher and the safe-haven CHF and USD lower. After trading through parity last Thursday, EUR/USD recovered and traded as high as 1.0201 yesterday. EUR/CHF climbed to 0.9934 but can’t manage to poke its nose back above 1.0.

Prices of most major commodities rose. Your morning coffee got 7.7% more expensive and the surge to go in it, +0.8%. 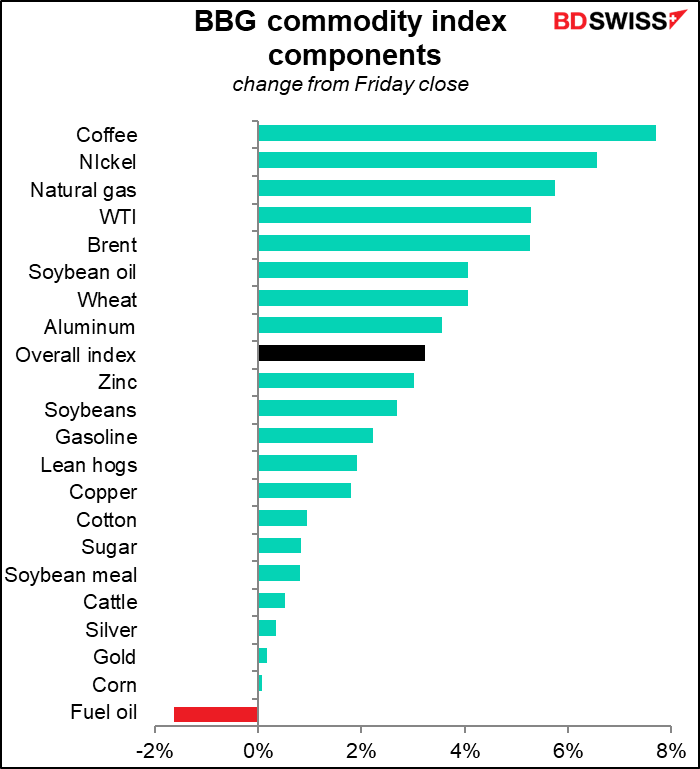 Sentiment began to fade around the European close however and took a big hit late in the US day following a Bloomberg report that Apple would be slowing hiring and spending next year (here’s a link that doesn’t require a Bloomberg subscription.) This got people concerned about the earnings from the tech sector that are due out this week. The S&P 500 closed down 0.84% and the NASDAQ -0.81%. Market attention today will focus on earnings from Netflix Inc.

You can see how copper prices, which had been rallying, began to fall along with the S&P 500. 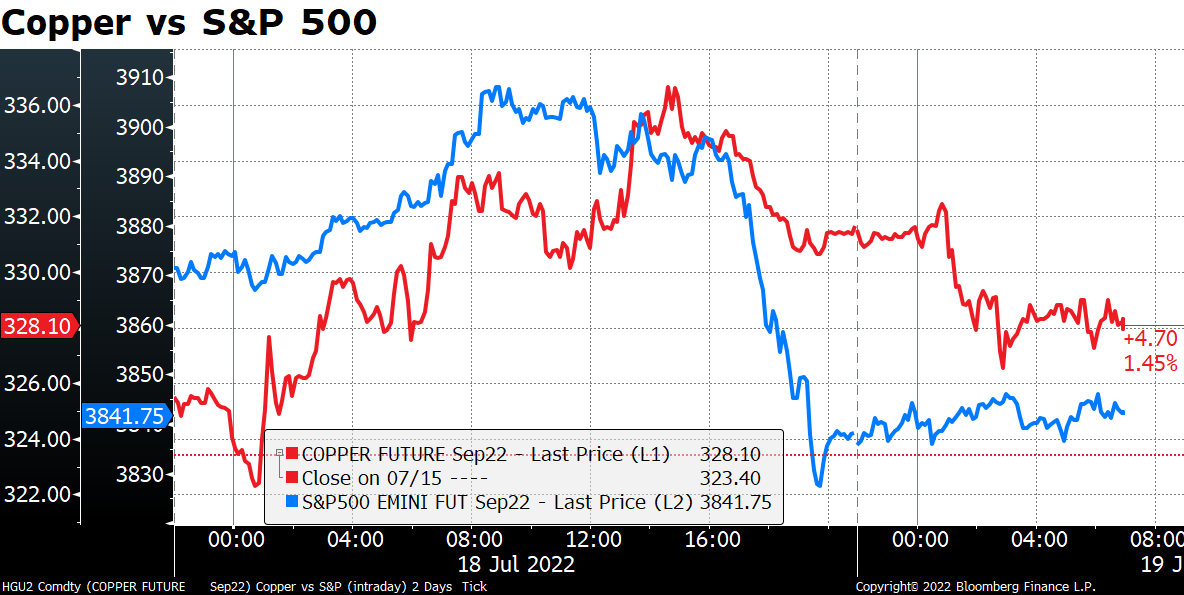 AUD/USD initially followed copper up and then down, but starting from the Asian day has been rising even without such support.

This is really big news. According to Reuters, Gazprom is declaring force majeure retroactively from June 14th (that’s a month ago) and said it cannot guarantee gas supplies. This comes as the Nord Stream 1 pipeline, the key pipeline delivering Russian gas to Germany and beyond, is shut down for 10 days of annual maintenance that is scheduled to finish on Thursday. It looks like they’re preparing the legal groundwork to suspend the pipeline’s operations even after the maintenance is finished. 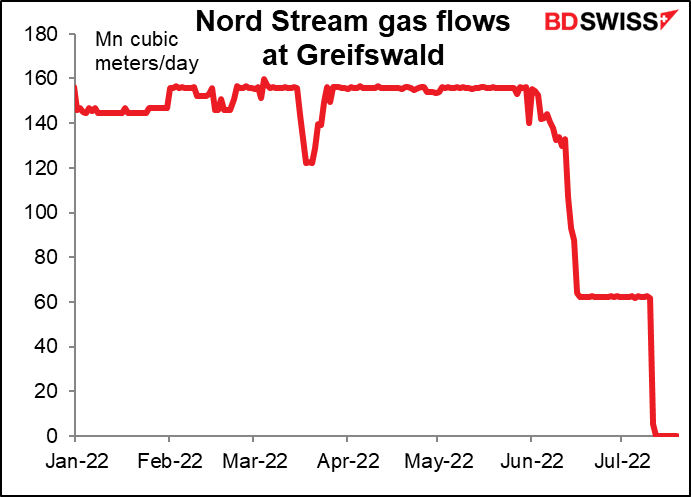 Russia accounted for around 45% of German gas imports as recently as May. Now that’s down to around 25%. There’s no way that Germany can make up for the lost supply from elsewhere.

Moreover, Germany acts as a storage & redistribution hub for gas supplies to other European countries. It re-exported 41% of its imported gas in 2020, 35% in 2021, and 33% in the first months of this year. Thus a crunch on German imports will have knock-on effects throughout Europe.

Bloomberg reported that a draft EU document warned that a Russian gas cutoff could cut EU GDP by 1.5% in the worst-case scenario (unusually cold winter + insufficient preparations). Even an average winter would reduce EU-wide GDP by between 0.6%-1.0%, they predict. (Some private sector forecasters have predicted even worse.)

According to Deutsche Bank, if Russia fully stopped gas supplies to Germany after the current maintenance period, gas rationing would be unavoidable during the winter months as even with a relatively modest 35% re-export level, the country’s gas tanks would be empty by March 2023. Since critical infrastructure and private households would have priority, industrial consumers would be affected the most. The government, large individual gas consumers, and industry associations are currently discussing which facilities could be switched off first. The “gas supply vulnerability report” to be published by the Federal Network Agency in September may provide some answers.

European Commission President von der Leyen last week announced that a European gas emergency plan will be presented within the next two weeks. Work has also started on coordinating contingency planning with respect to the rationing of gas to industrial sectors.

There was another round of voting for the race to be UK PM yesterday among the 358 Conservative Party MPs. The votes were as follows, with the change from the previous round in parenthesis:

Tom Tugendhat, chair of the Commons foreign affairs select committee, was knocked out after receiving the support of only 31 MPs.

There will be two more votes, today and tomorrow. The final two contenders will then face a vote by the approximately 150,000 Conservative Party members, who will in effect elect the Prime Minister on behalf of Britain’s 67.22m people. The results of that vote will be announced on Sep. 5th.

I would guess that the market favors Sunak, known for not being particularly generous with giveaways. Also he’s the best-known of the candidates and therefore the “safest choice” for investors. It seems likely that he’ll make the final round, but it’s not clear whether he’ll win it. 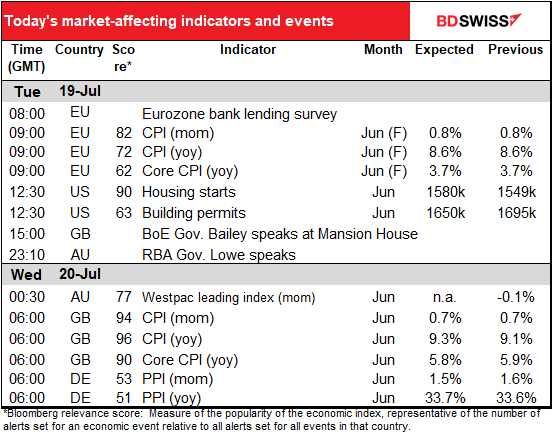 Not that much on the schedule today.

We get the final Eu-wide consumer price index (CPI) for June. Germany’s final CPI, released last week’, wasn’t revised at all so today’s EU-wide is unlikely to shock the markets.

When North America wakes up, US housing starts and building permits will be released. Starts are expected to be up 2% mom while permits are forecast to be down 2.7% mom. Starts are expected to rise probably just as a bounce after the previous month’s dreadful 14.4% decline. I don’t think anyone would expect this to signal a turnaround in the housing market as the Fed raises rates and the housing market continues to cool. 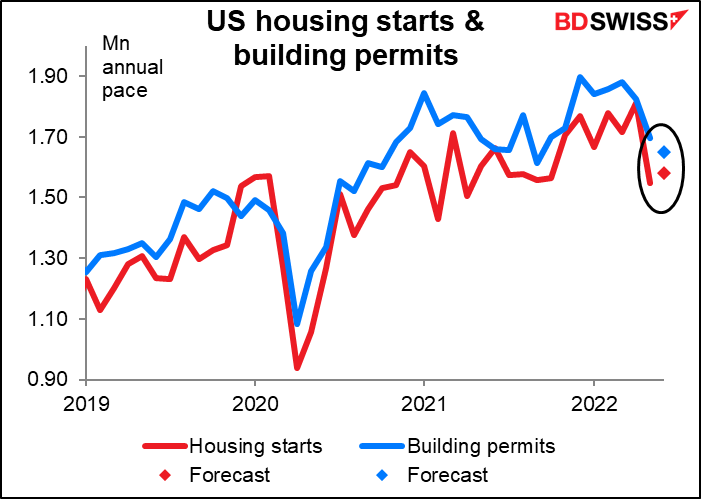 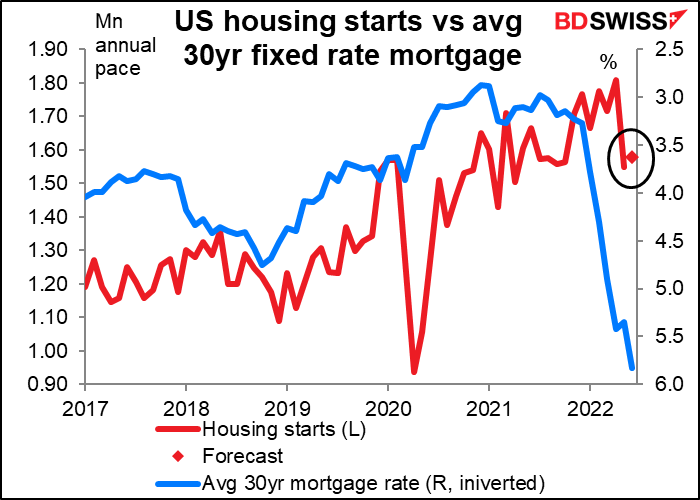 Bank of England Gov. Bailey will speak this evening at the Mansion House Financial and Professional Services Dinner. Although he’ll give his speech at 17:45 GMT, it will be available on the Bank of England’s website at 15:00.

Then overnight we get a much-awaited speech by Reserve Bank of Australia (RBA) Gov. Lowe. So far no title or link to the speech, but he’s likely to keep to his recent mantra: “’higher rates are needed.” The focus of attention will be on any hints he gives about the possibility of a 75 bps hike at the upcoming August 2nd RBA meeting. Australia’s 2Q CPI will be released on July 27th, after today’s speech but before the RBA meets. He’ll therefore probably be non-committal on that question and say it depends on the data, which is what they all say, innit? 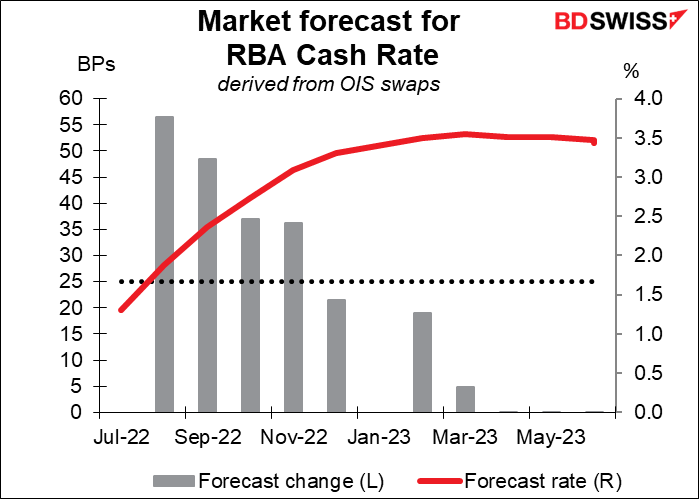 Then Wednesday morning at 7 o’clock as the day begins, Britain announces its consumer price index (CPI). Any guesses as to which direction it’s likely to go? You can choose between a) higher and b) higher. (Admittedly the core rate is expected to dip a bit, but that’s just incidental.) This won’t surprise anyone, as the Bank of England’s Monetary Policy Committee (MPC) said in the statement after its June 16th meeting that “CPI inflation is expected to be over 9% during the next few months and to rise to slightly above 11% in October.” Nonetheless this result is likely to confirm in their minds that this forecast is correct and they’ll have to tighten further in order to control inflation. It might therefore be positive for GBP. 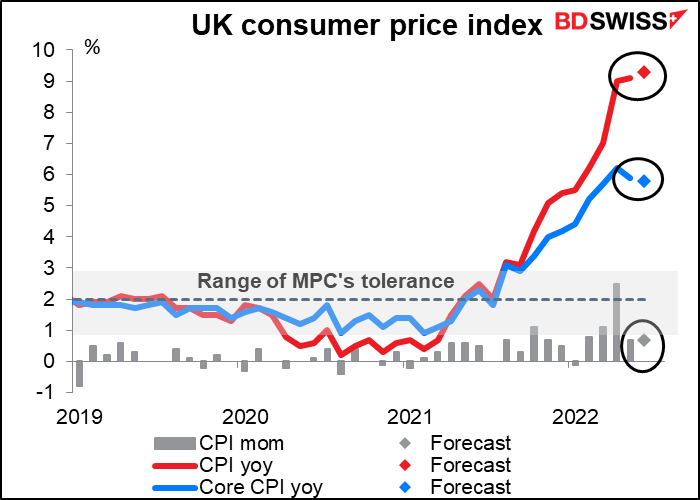 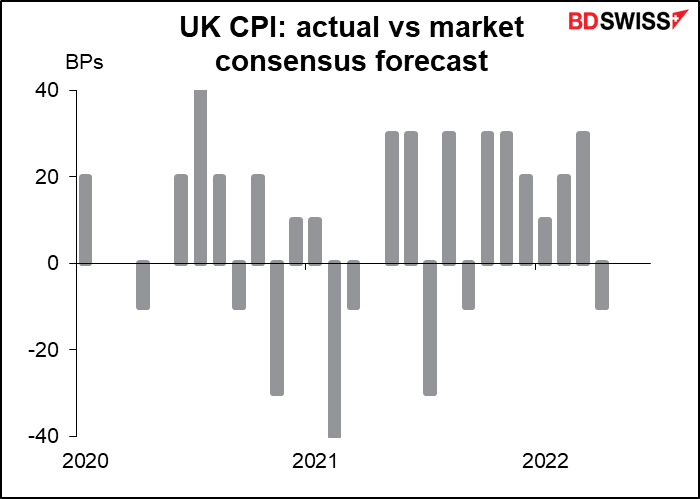 Which indicator should you watch? There’s not much difference in the response of the pound to the beat or miss of any of the three measures (headline % mom, headline %  yoy, core %  yoy). The two headline figures seem to have a slightly better correlation but not that great. 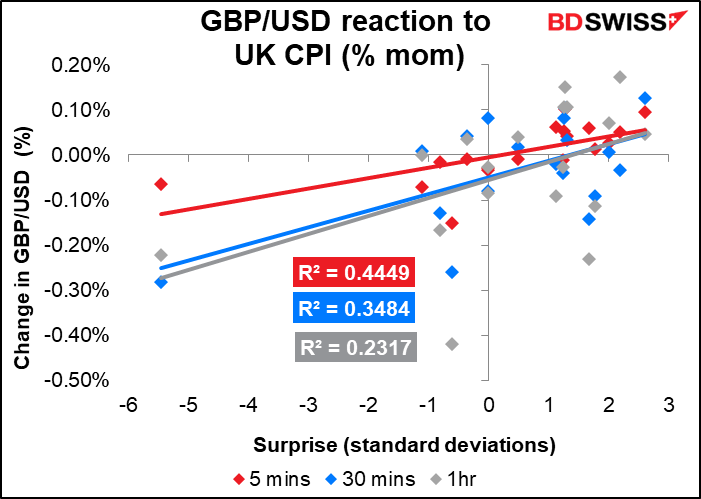 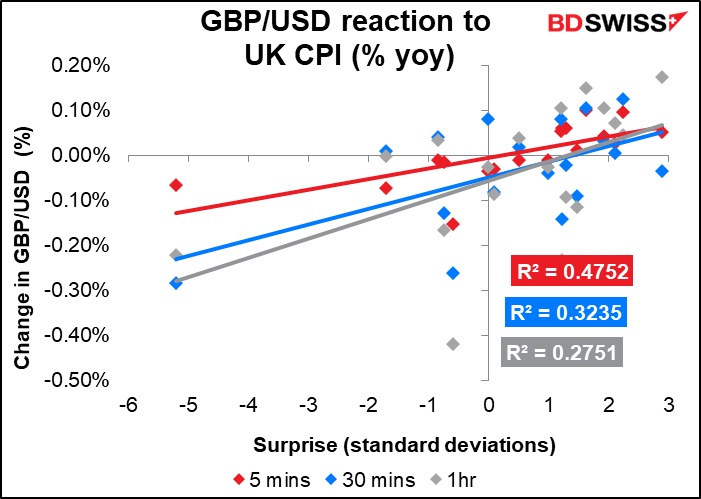 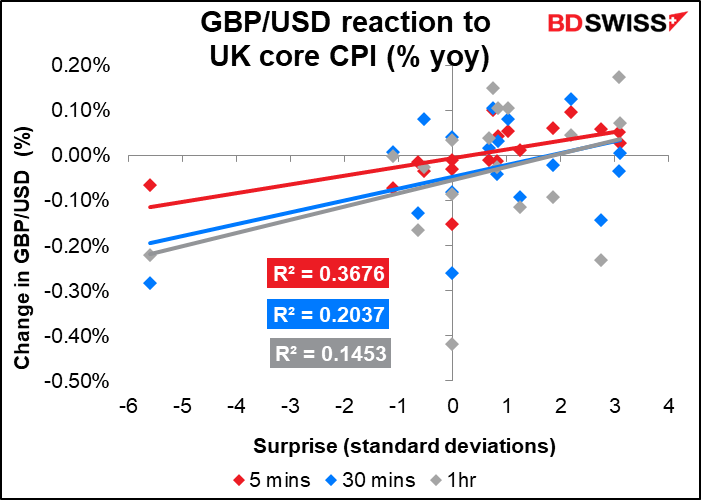 Which currency should you use to trade this event? GBP/USD has a slightly better correlation with the results of the CPI announcement than EUR/GBP does, especially an hour or so after the announcement. 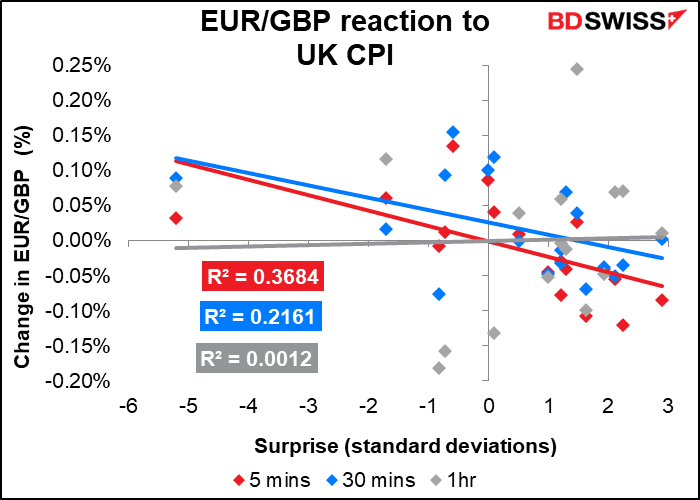 The German producer price index (PPI), which comes out at the same time, isn’t that big an indicator but may attract some attention because inflation is the name of the game nowadays. The year-on-year rate of change was steady last month and is expected to be virtually the same again this month. This makes me suspicious because something changing at this pace (33% yoy, more or less) is usually much more volatile. But there you are. In any event, a 33% rise in producer prices for the third month in a row is not going to calm anyone’s fears of higher inflation. EUR+ (if anyone notices). 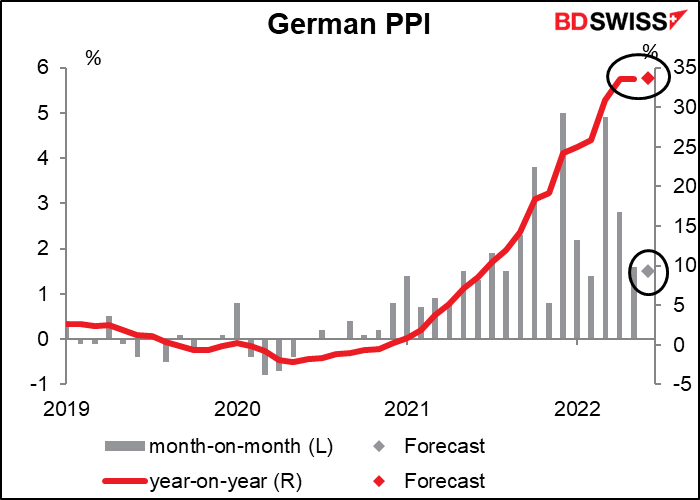 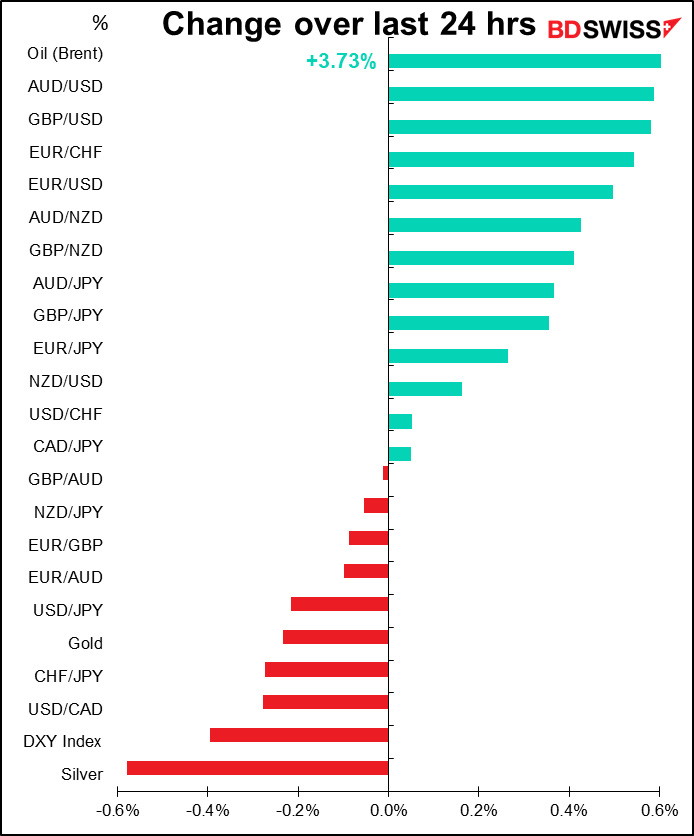 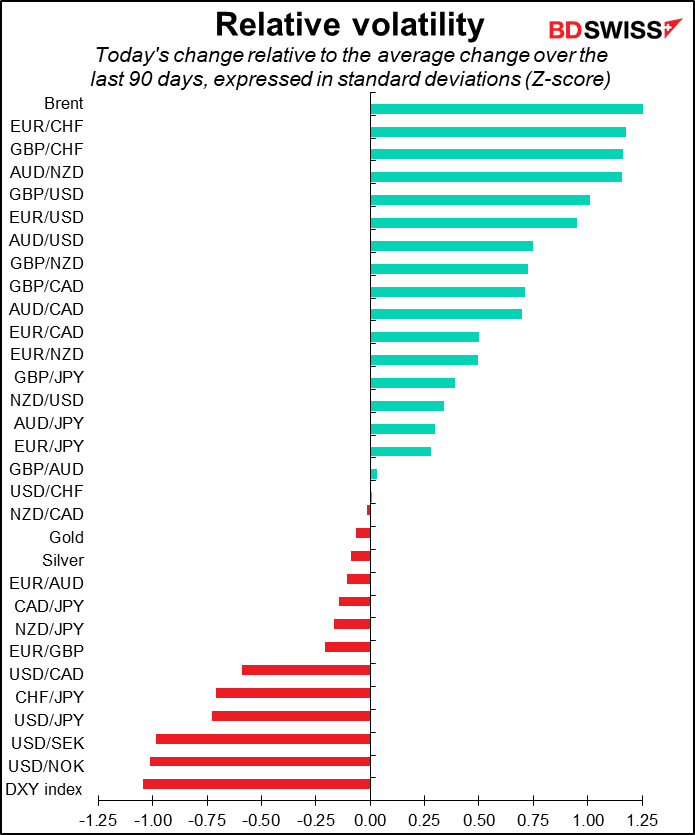