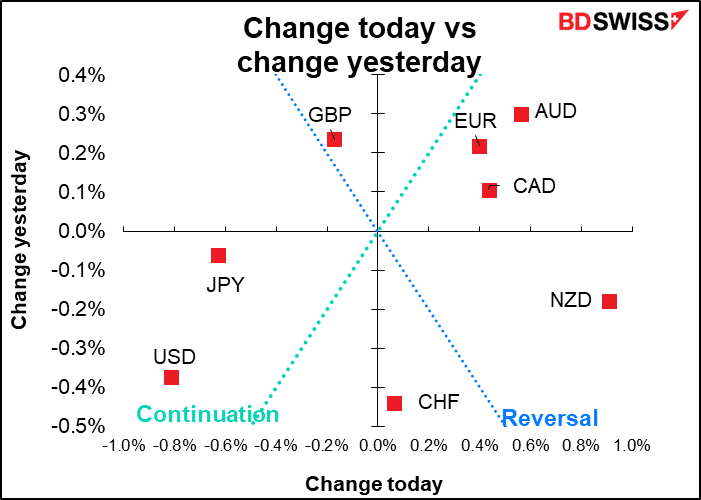 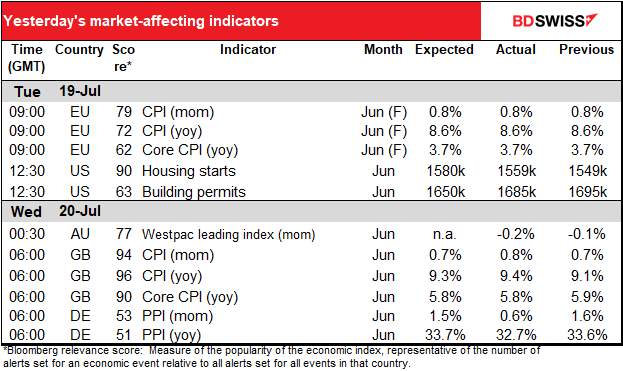 Two big Reuters stories sent EUR higher. First, an article saying that the European Central Bank (ECB) was considering a larger-than-expected 50 bps rate hike at its meeting Thursday, despite having said several times that it would be 25 bps. This would be coupled with a deal to protect the bond markets of heavily indebted countries (read: Italy), with some conditions like they stick to European Commission rules on reforms and budget discipline.

The market swiftly repriced the likelihood of a 50 bps hike on Thursday, although there remains considerable skepticism about it. 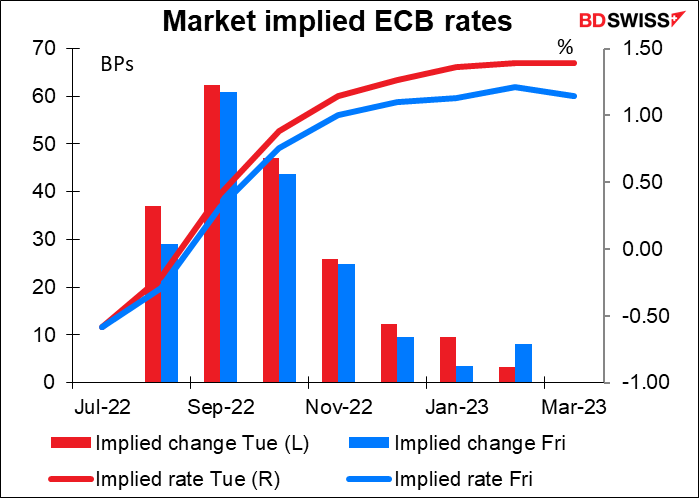 At the same time, Italian bond spreads came in somewhat in anticipation of a relatively strong “anti-fragmentation tool” being implemented, one strong enough to allow them to make such a big jump in rates. 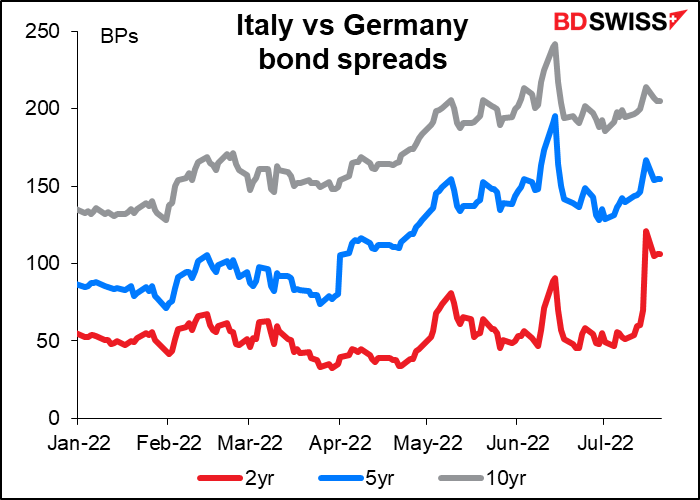 Is a 50 bps hike possible? The statement following the June meeting stated unequivocally that “the Governing Council intends to raise the key ECB interest rates by 25 basis points at its July monetary policy meeting.” This was agreed unanimously and reaffirmed by ECB President Lagarde at the Sintra symposium. The story may be just a trial balloon to see what the market reaction would be or to put pressure on the doves on the Governing Council. On the other hand, it could indicate a deal between the hawks and the doves: a bigger rate hike to satisfy the hawks vs a stronger anti-fragmentation tool to satisfy the doves.

Secondly, Reuters also reported that Russian gas flows via the Nord Stream 1 pipeline would restart on time on Thursday after the completion of scheduled maintenance, albeit at below full capacity.

This story didn’t have that much impact on Eurozone gas prices, but did give rise to some optimism in the markets that the Eurozone will be able to avoid recession. 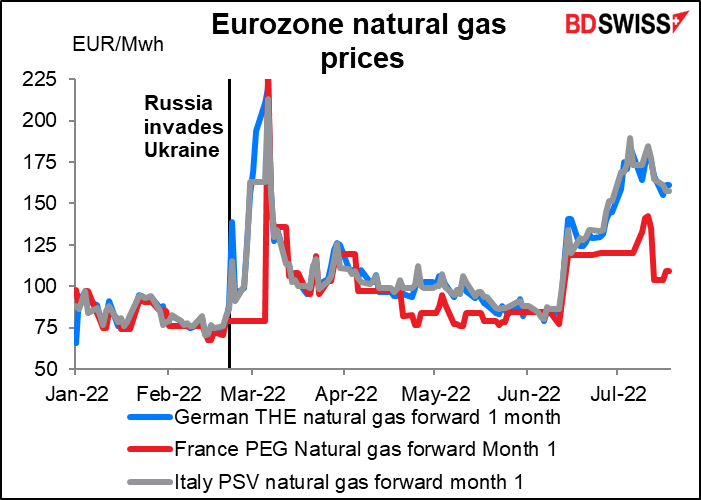 This was one of the reasons why stock markets are a sea of green this morning. The S&P 500 ended up 2.8% and the NASDAQ +3.1%. It was an unusually broad-based rally for the S&P 500, with 494 of the companies in the index gaining, the most since April 2020 when the US government was unveiling a wide variety of relief measures to deal with the pandemic. After the close, Netflix reported that they lost fewer subscribers than was feared, sending their shares up 7.7% in after-hours trading. That should set a good tone for stocks today.

GBP was lower despite comments by Bank of England Gov. Bailey that “a 50 basis point increase will be among the choices on the table when we next meet” on August 4th, given upside inflation risks. He added that the committee hadn’t made a decision yet (duh – they haven’t even met.) The comments didn’t affect GBP that much probably because the market was already forecasting a 50 bps hike at the next meeting. 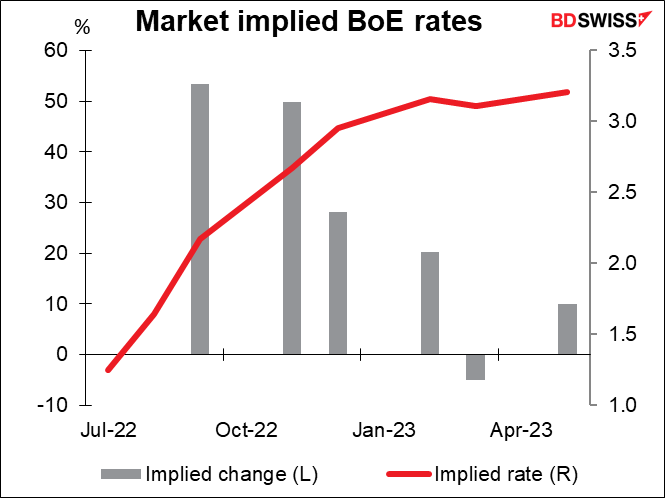 In the UK race for head of the Conservative Party – a job that comes with the position of Prime Minister — former equalities minister Kemi Badenoch was eliminatedin the fourth round of voting by Conservative Members of  Parliament (MPs). This leaves the following three candidates (change in their vote total in parenthesis):

The bookies are making Truss the favorite. If you want to see a compendium of her greatest hits in public speaking, check out this tweet. Looking at this video she appears to be a worthy successor to Boorish Johnson, in my view. 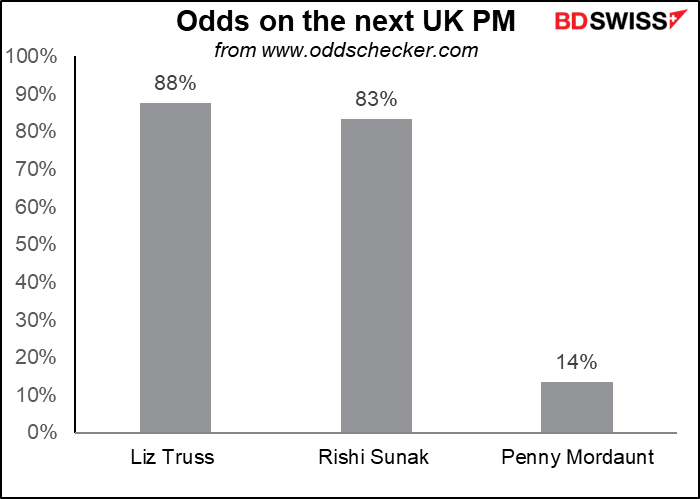 AUD gained on the general improvement in risk sentiment. Also there were some AUD-specific reasons for the currency to appreciate, too. The minutes from the RBA’s July meeting (at which the RBA hiked rates by 50 bps) explicitly state that “the current level of the cash rate is well below the lower range of estimates for the nominal neutral rate,” which implies that they have a long way to go still. Meanwhile, RBA Gov. Lowe confirmed that he thinks rates are still “too low” and that the Bank would continue to raise them, “at least” to 2.5%, which he considers to be the neutral level for rates. “How quickly we need to get there and indeed whether we need to get there will be determined by the inflation outlook,” he said.

Separately,  Australian Treasurer Jim Chalmers announced the terms of a wide-ranging review of the RBA that will look at its inflation target, policy tools, governance, and culture, amid criticism over its forecasts and interest-rate decisions

So why did NZD gain more than AUD, which is usually the leader among the commodity currencies? This was especially odd after milk fell 5% at yesterday’s auction (-5.1% for whole milk powder), the eighth fall in the last nine auctions (although the whole milk futures price did turn up slightly). 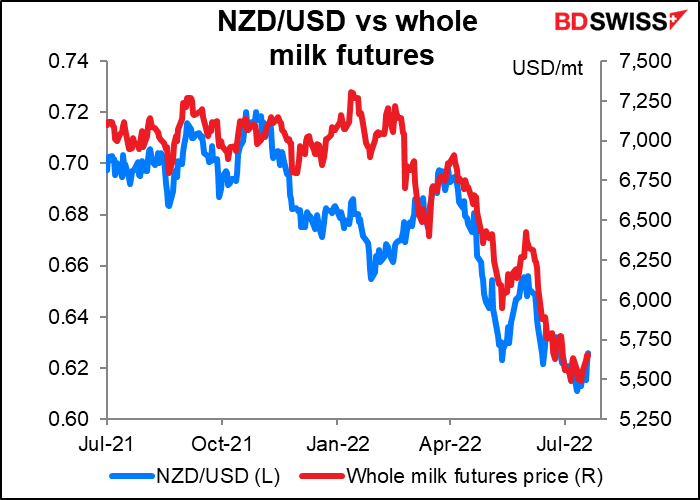 My guess is technical: just that AUD/NZD had moved to the top of its recent range and some selling of the pair came in to push it back down even as AUD moved up. 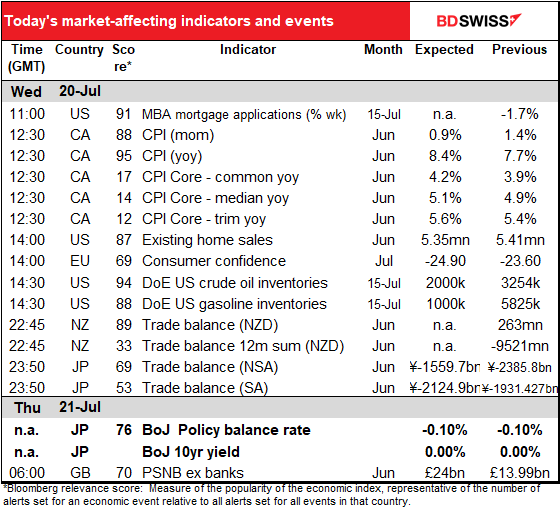 No major indicators during the European day. Instead we’ll be waiting for Italian PM Mario Draghi’s speech to Italy’s Senate. The Senate will then hold a vote of confidence in PM Draghi’s government. Draghi will repeat the process tomorrow at the Lower House. Usually the two houses vote the same way so we should have a pretty good idea this afternoon how he’s likely to fare.

If Draghi retains the confidence of his original coalition (mostly) and remains in office, then he’ll get to work on the 2023 budget and the third tranche from the European Commission’s Recovery and Resilience Facility. Then a general election might be held next spring.

If he loses, he’ll resign and Italian President Mattarella will probably call snap elections, possibly in the second half of September. That would leave open the question of whether they have time to approve the 2023 budget before the end of the year and also meet the conditions necessary to get the above-mentioned third tranche of EC money. That’s the major risk: financial instability arising from political instability.

An early election could be negative for the euro in that it would increase instability in the bloc’s third-largest economy. Then again, if people think the election would result in a more stable government that would eventually back economic reforms, it could be good for the euro in that it would reduce the need for the European Central Bank’s mooted anti-fragmentation tool, which is in effect quantitative easing under another guise.

There’s also a third possibility: market participants are so accustomed to Italian political theater that they don’t even notice. Italy has had some 132 governments in the last 161 years with an average tenure of under 15 months. Draghi’s unity government has so far beaten the average as it’s lasted nearly 18 months so far.

We’ll have to wait for North America to wake up to get any indicators. Then overnight the Bank of Japan Policy Board meets to decide to do…nothing, mostly. We’ll discuss that in chronological order though.

The US Mortgage Bankers’ Association (MBA) index of mortgages for home purchases has been tanking recently. On a seasonally unadjusted basis it’s almost the lowest it’s been for this time of year in the past 10 years. This shows that the Fed’s rate hikes have been feeding through to the real economy. 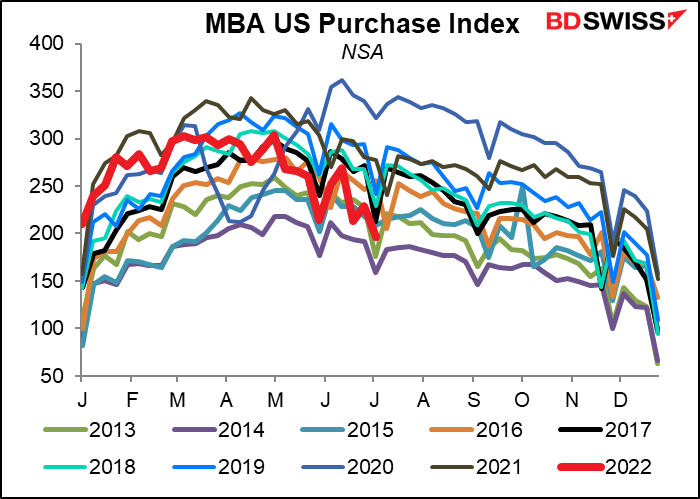 Canada’s consumer price index (CPI) is expected to surge further out of control. Note that the forecast month-on-month change (0.9%), although down from last month’s 1.4%, is still perilously close to the “inflation control range” for the year-on-year rate of change (1%-3%). In other words, after 225 bps of tightening Canada’s prices are still rising as much in a month as they think appropriate for a year. This is a serious no-no for central bankers. Also all three core measures are forecast to rise further above the target range. I would expect this to increase expectations of further tightening and therefore be positive for CAD. 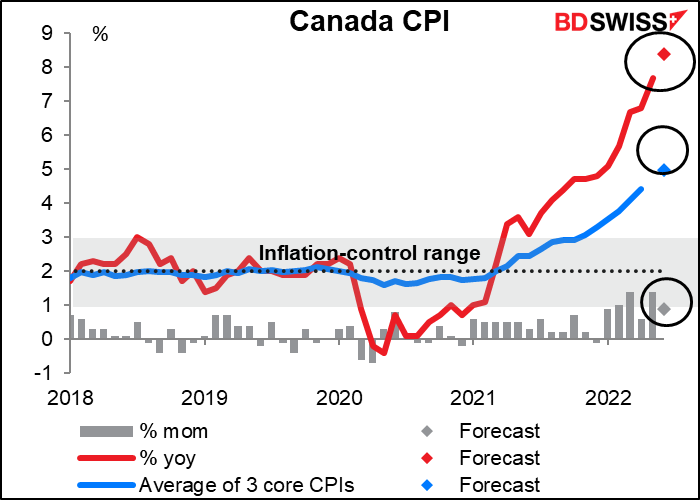 How do the forecasters do on this indicator? So far they’ve usually underestimated it. Since Jan. 2021 the indicator has beaten estimates 11 times, missed three times, and been spot on three times as well. So it’s 11-6 for beats. 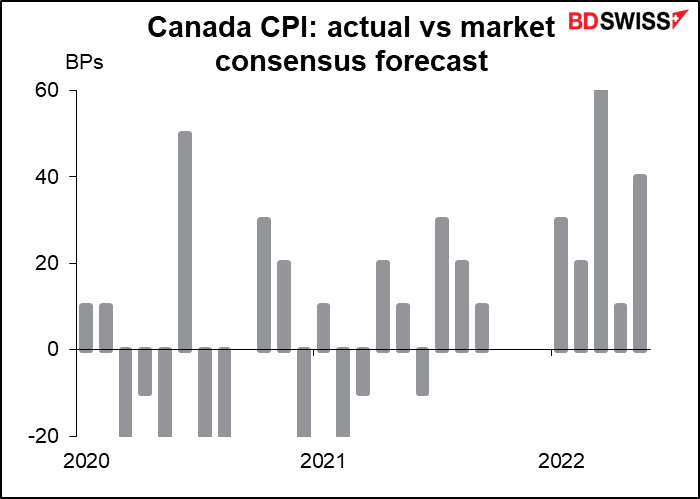 Market reaction: The FX market does react quickly and consistently to this indicator. 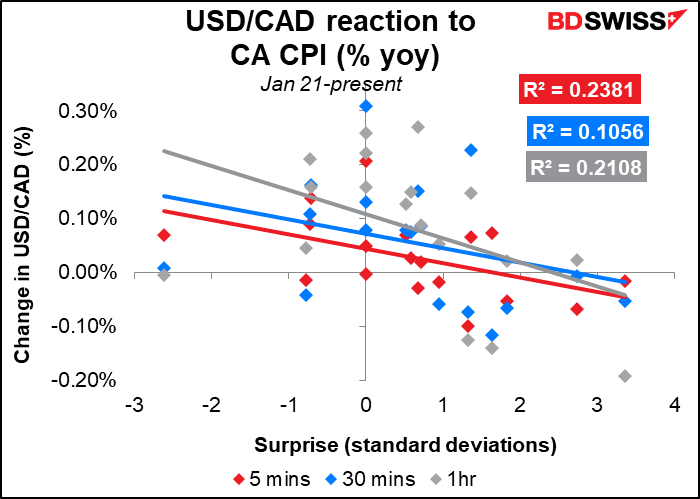 US existing home sales are expected to be down 0.7% mom, while next week’s new home sales are forecast to be down 3.0%. Both have been dropping sharply, victims of the Fed’s rate hikes, which have sent mortgage rates up 245 bps so far this year. Note though that sales are only back to the levels prevailing before the pandemic so this can hardly be called a housing market crash (yet). 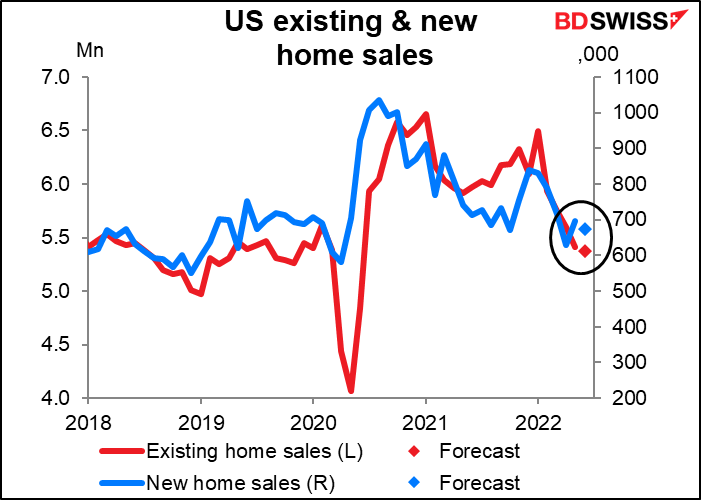 Eurozone consumer confidence isn’t that important for the markets but it’s interesting to see how it’s fallen in line with the rise in natural gas prices. 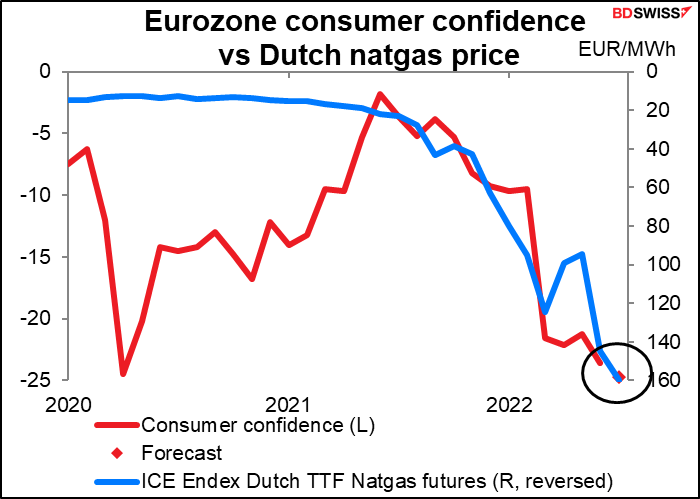 Overnight we get trade figures from New Zealand and Japan. 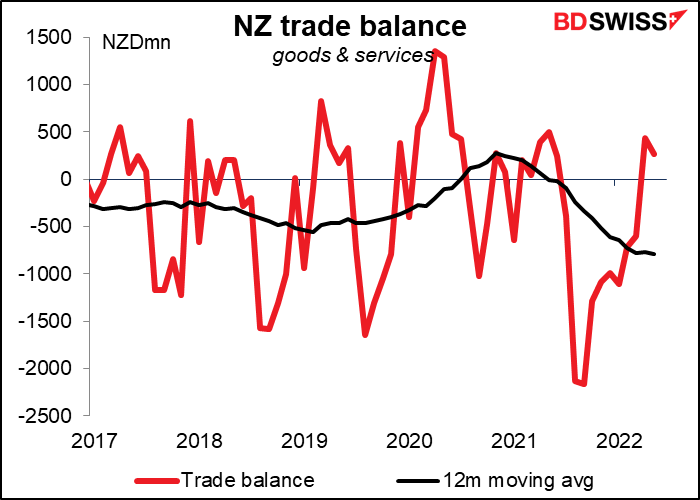 For Japan’s trade, the seasonally adjusted figure is expected to show a further widening in the trade deficit. But the unadjusted figure, which is what the market seems to look at, is forecast to show a large increase. 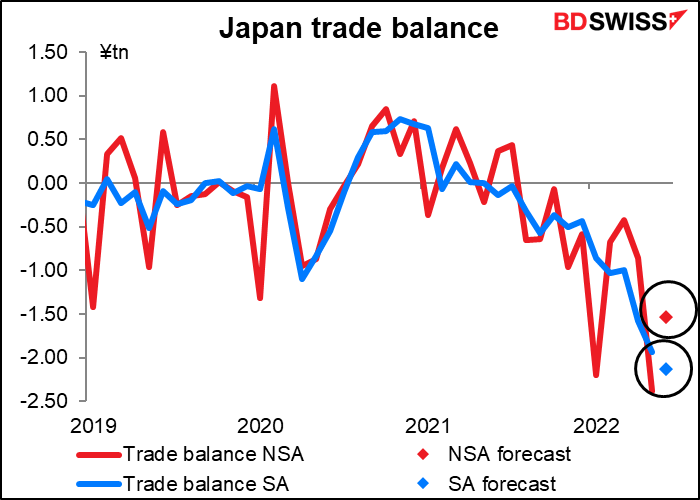 While I’m sure in years gone by this was the major Japanese economic indicator, nowadays the currency doesn’t move that much on it. 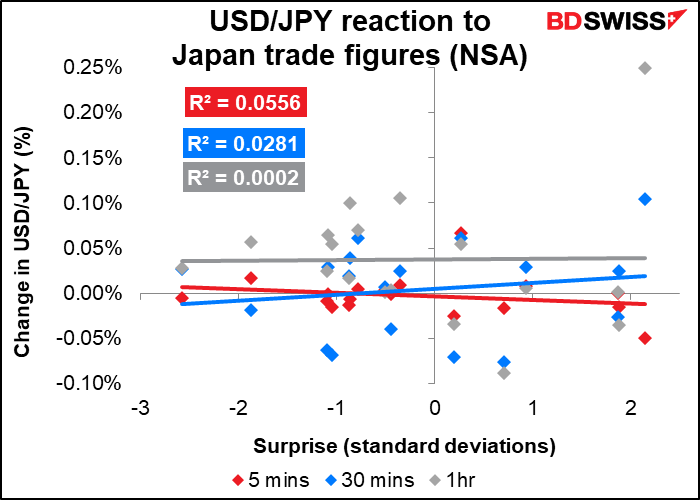 As for the Bank of Japan (BoJ) Policy Board decision, as usual I discussed this to a great extent in my Weekly Outlook, which you probably didn’t read, you bad boy or girl! But of course that gives me an extra chance to write about it again, which is great since I’m paid by the word.

Briefly, I don’t see anything of note happening at this meeting. There was considerable speculation ahead of the June meeting that the BoJ would dismantle its yield curve control (YCC) program, which caps the yield of the 10-year Japanese Government Bond (JGB) at 0.25%. But the BoJ bought some $81bn of JGBs to hold the line and that pretty much squashed the speculation. As a result, I assume that this BoJ meeting will result in no change to their forward guidance or the YCC program.  The only decision to make is whether to allow the special pandemic fund-supplying operation to end as scheduled in September. I assume they’ll say yes.

The meeting will include an updated version of their quarterly Outlook for Economic Activity and Prices. The Bank is likely to downgrade its growth forecast for FY2022 in line with the slowdown in overseas economies and raise its inflation forecast because of higher fuel and food prices. This is in line with what the market has been thinking anyway and so shouldn’t surprise anyone. The main point of interest will be what the BoJ thinks of the rise in long-term inflation expectations, which could be a driver for higher wages and thereby create the wage-price spiral that the BoJ and government have been hoping for for decades. 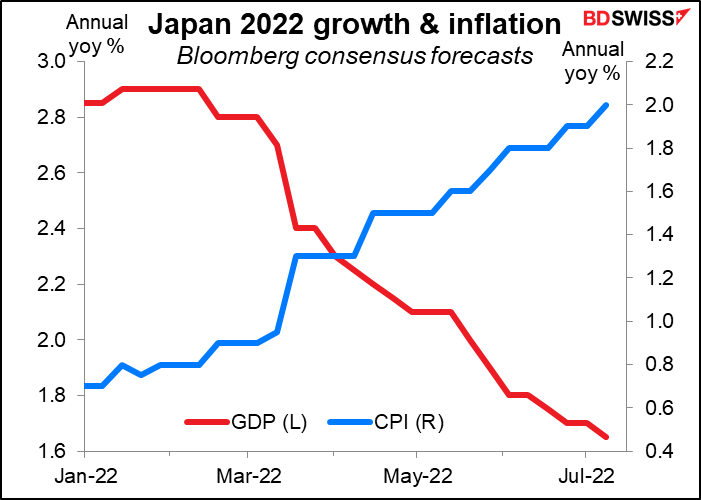 A weaker economic forecast combined with reaffirming their ultra-loose policy stance, the last one remaining among the major economies, is a possible catalyst for a further leg down in JPY (further rally in USD/JPY). 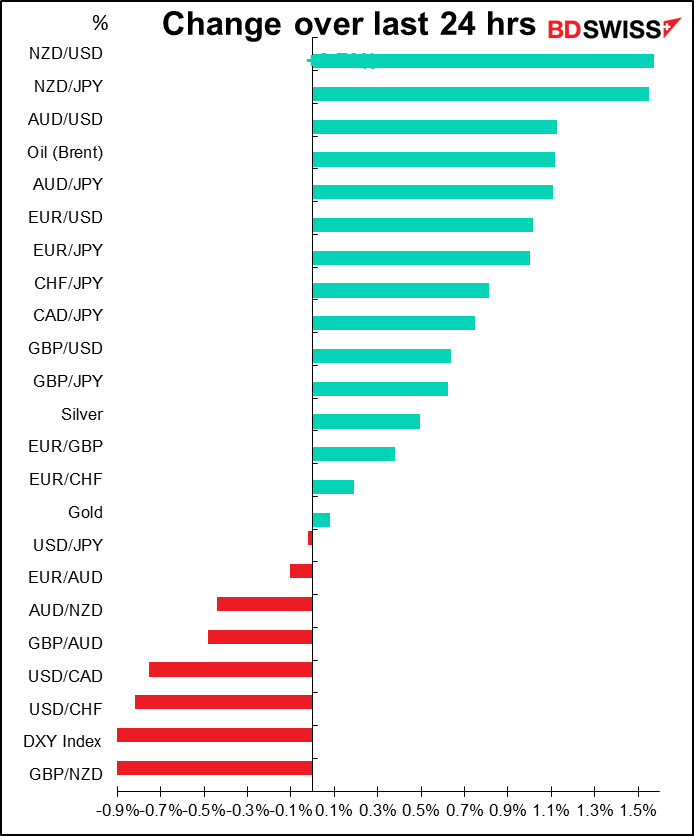 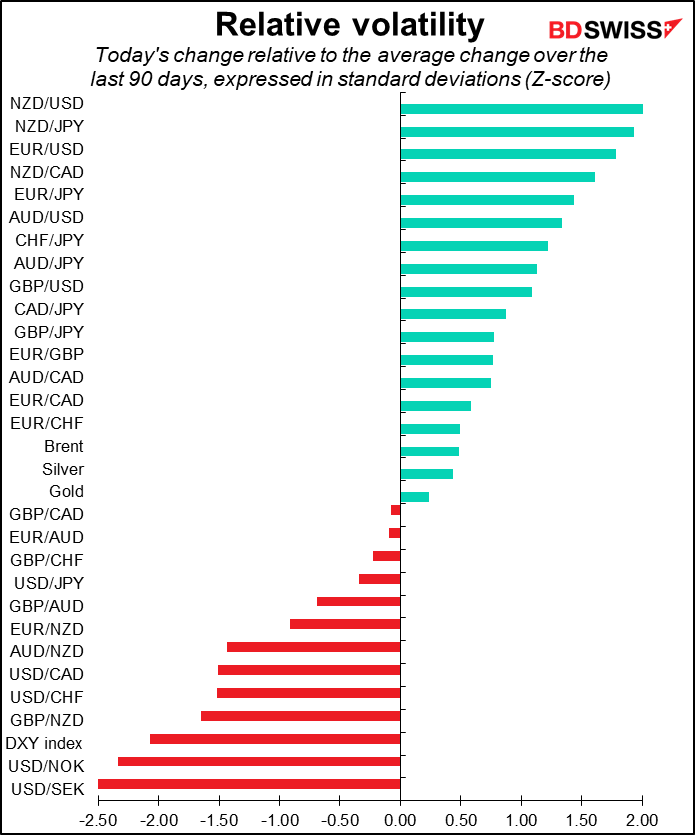