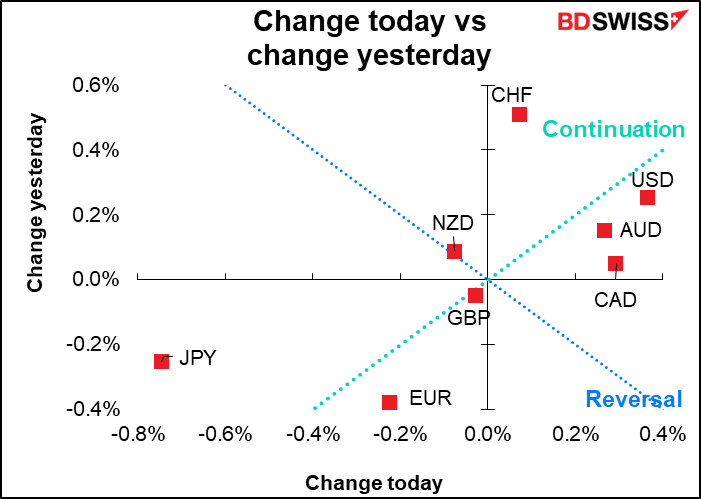 Fed Chair Powell showed why we have to pay attention to what he says no matter how often he speaks. He just held a one-hour press conference last week so one might have expected nothing new from Monday’s speech, but on the contrary he set the cat among the doves yesterday when he said, “if we conclude that it is appropriate to move more aggressively by raising the federal funds rate by more than 25 basis points at a meeting or meetings, we will do so. And if we determine that we need to tighten beyond common measures of neutral and into a more restrictive stance, we will do that as well.”

The US fed funds futures went shoot up (actually, the price went shooting down – the implied yield went shooting up). The futures are discounting more than 200 bps of tightening this year (including the 25 bps hike last week) for the first time. This makes the market more aggressive than the Federal Open Market Committee (FOMC) was last week when its members set out their forecasts in the “dot plot.” 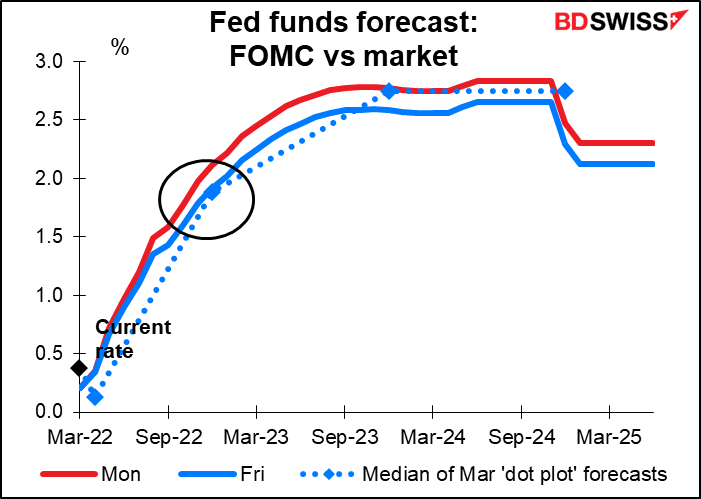 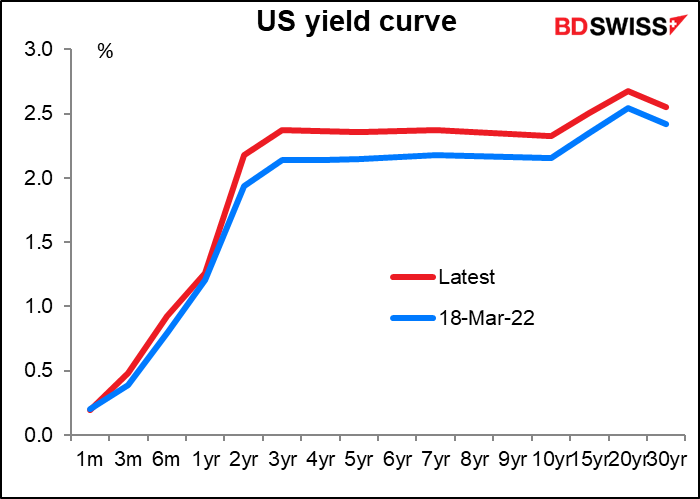 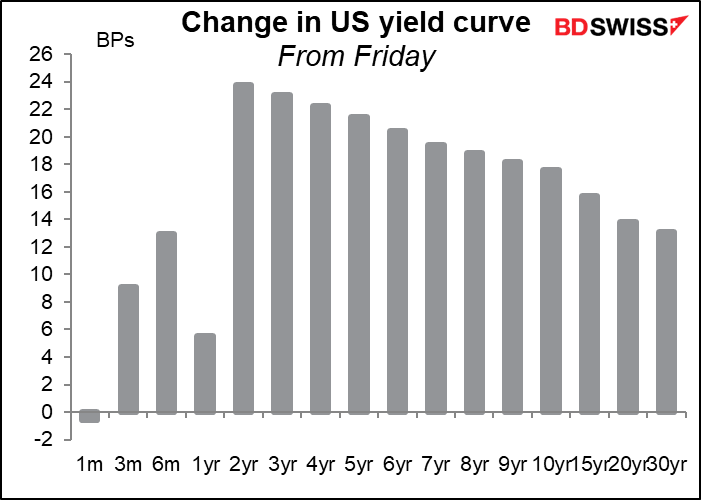 Bond yields everywhere blew out as a result, with US yields blowing out the most and JPY yields blowing out the least, thanks to the Bank of Japan’s yield curve control (YCC) program, in which the BoJ pledged to keep the yield on the benchmark 10-year Japanese Government Bond (JGB) within ±25 bps of 0.0%. The increasing yield advantage of US Treasuries supported the dollar all around.

This effect was particularly noticeable vs JPY as the spread there widened the most. Elsewhere, oil had another good day, with the European benchmark Brent up 6.9% on the day. The European Council will debate on Thursday and Friday whether to ban imports of Russian crude oil. Josep Borrell, effectively the foreign minister for the EU, said he expects leaders to discuss but probably not yet approve further sanctions at this meeting. Nonetheless the oil market is starting to price in the possibility of this catastrophic event.

The prompt time spread, the difference between what people will pay for oil in one month vs what they’ll pay for oil in two months, had been narrowing recently but it turned around yesterday and widened out again, which shows more concern about the near-term availability of oil. What’s causing oil price movements? The New York Fed publishes an Oil Price Dynamics Report that “examines what’s behind recent fluctuations in oil prices: demand factors, supply factors, or some combination of the two?” It was just updated yesterday. It conclusively shows that it’s the supply of oil (or rather the lack of it) that’s moving the oil price. This suggests that a move by OPEC to increase production could be effective in pushing down prices, although not even OPEC has enough spare capacity to make up for Russia’s absence from the market. 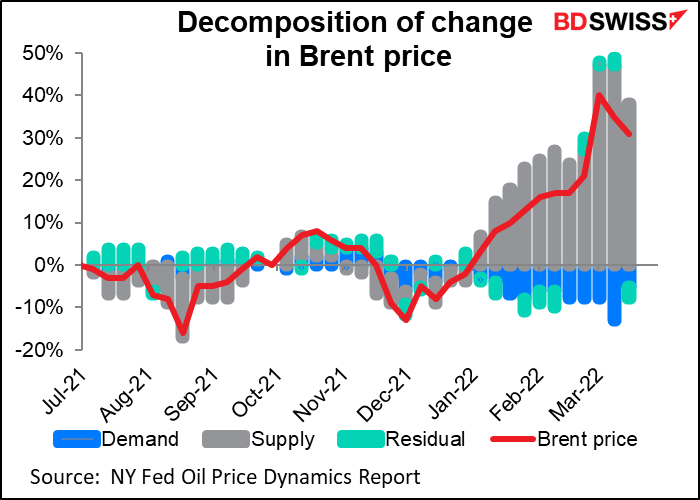 However, it doesn’t look as if Russia is completely absent from the oil market. We can tell that by looking at the ruble rate. Contrary to popular expectations, the ruble hasn’t collapsed. True it’s a lot weaker than it was before the invasion – USD/RUB is 106.65 this morning, vs 83.98 right before it gapped higher on Feb. 28th. However it’s in far far better shape than on March 7th, when it hit 177.26.

That may be because the Russian government now requires exporters to sell 80% of their foreign currency revenues to the central bank within three days of receiving them. It has also imposed various foreign exchange restrictions on residents of the country. The ruble’s recovery suggests Russia is still getting money from somewhere. That probably means the oil & gas markets. 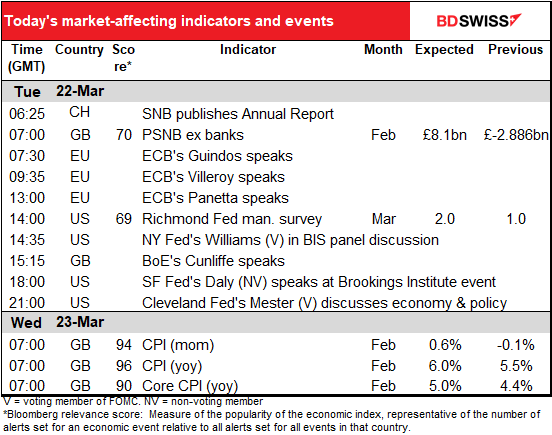 Not much on the schedule today. Mostly a lot of ECB-speak (3), Fedspeak (2), and BoE speak (1). It will be interesting to hear their take on the global situation and the outlook for inflation.

Cleveland Fed President Mester is known to be one of the more hawkish members of the Federal Open Market Committee (FOMC) so her views will be taken as one extreme of the range of opinion. But after  Minneapolis Fed President Kashkari, known as the most dovish of the doves, recently said the Fed should shrink its balance sheet at roughly twice the pace it did last time and get rates to either “modestly above neutral” or “bring policy to a contractionary stance,” then all bets are off as to who thinks what.

Bank of England Deputy Gov. Cunliffe was the fellow who dissented at the last Monetary Policy Committee (MPC) meeting and voted to keep rates stable. People will want to hear his explanation to see if he’ll think the same thing at the next meeting (May 5th) and whether any other MPC members are likely to agree with him.

The UK public sector net borrowing (PBNB) may be of some interest ahead of tomorrow’s UK Spring Statement. It’s expected to show a continued decline in the 12-month rate of borrowing, which may leave Chancellor Sunak with more room to give away goodies and still hit his borrowing target. 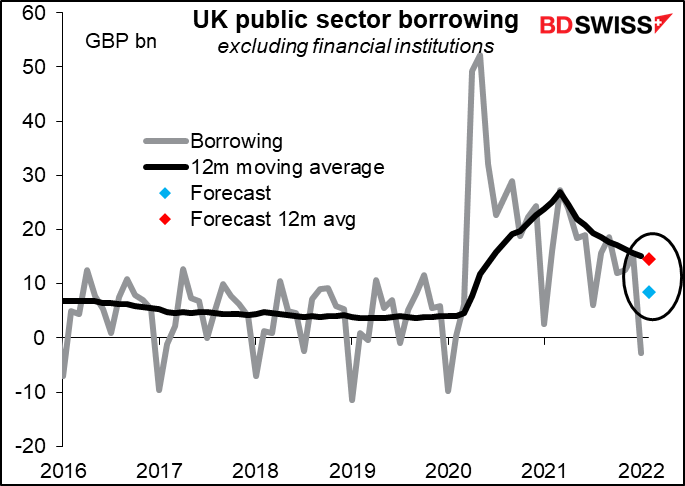 The only US indicator on the schedule today is the Richmond Fed survey. The Bloomberg relevance score shows that the market doesn’t watch it as closely as it does the Empire State or Philly Fed indices, but investors certainly should:  my research shows that among the five regional Fed surveys, it’s the best correlated with the Institute of Supply Management (ISM) manufacturing survey, which is what people are trying to forecast. (It doesn’t have much power at explaining the Markit manufacturing PMI however – the only one that’s good at that is the Empire State survey.)

The market is forecasting that the figure will double! Yes, it’s expected to go from 1 to 2. So, a bit better but hardly an acceleration. That would accord with the fall in the Empire State/Philly Fed average to 7.8 from 9.6 – the US economy is expanding, but not that rapidly. (The Atlanta Fed’s GDPNowcast forecast for Q1 GDP is 1.3% qoq SAAR, which would be down tremendously from +7.1% in Q4 2021.) 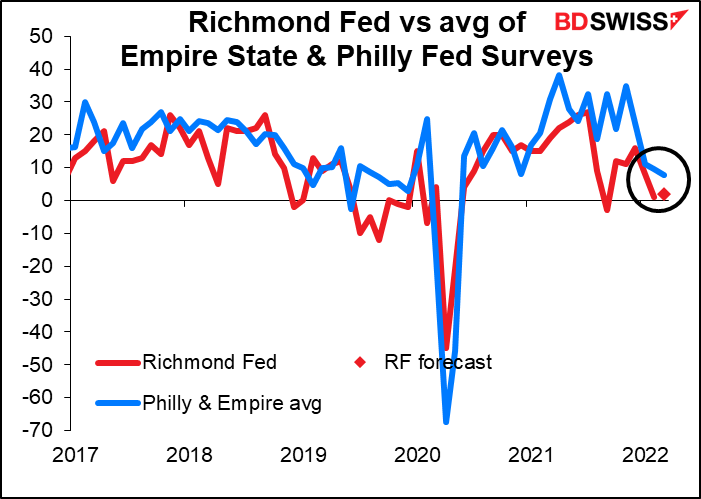 Then we wait until Wednesday morning at 7 o’clock as the day begins and the UK announces its consumer price index (CPI). It’s expected to show headline inflation rising further to 6.0% yoy This should be no surprise to anyone. The statement following Thursday’s Bank of England meeting said that “Inflation is expected to increase further in coming months, to around 8% in 2022 Q2, and perhaps even higher later this year,” mostly due to higher energy prices. Thus an increase like this shouldn’t shock the markets. It’s likely to be neutral for the pound. 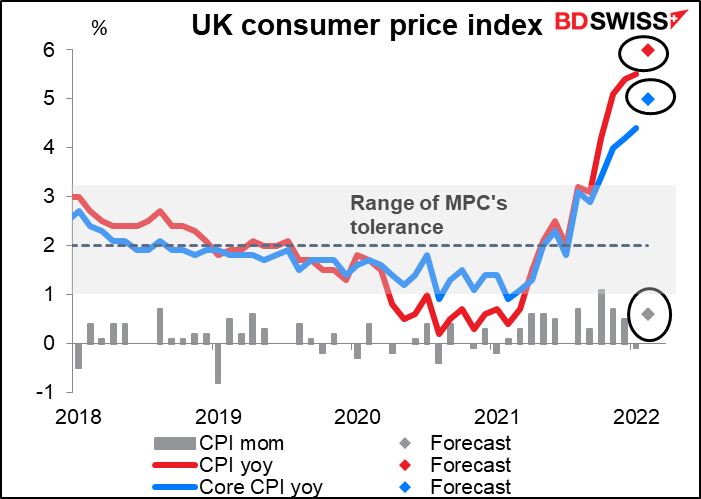 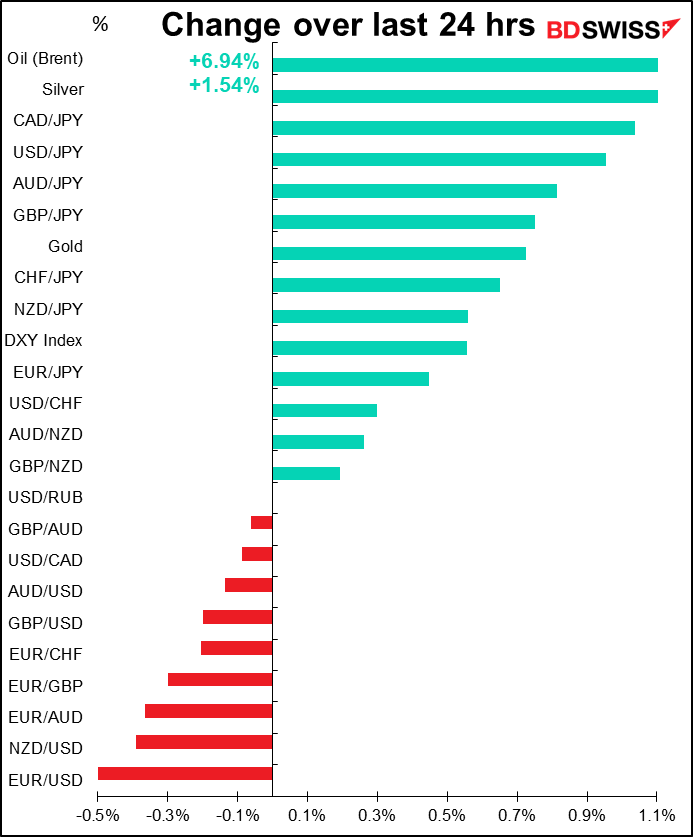