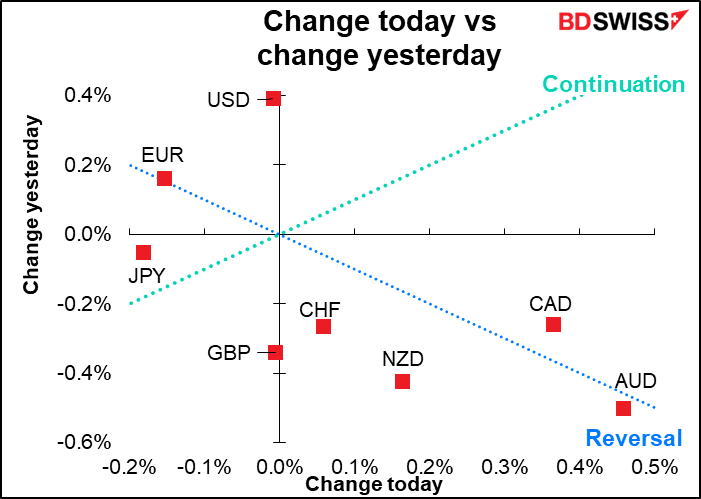 The commodity currencies staged a rebound Monday that seems to be largely just mean reversion from their fall on Friday. It wasn’t related to any improvement in risk sentiment (European stocks were mixed, US stocks closed lower) nor to any rebound in commodity prices either (most fell, including oil).

EUR also mean reverted but in the other direction as European Central Bank (ECB) President Lagarde made a statement at the Hearing of the Committee on Economic and Monetary Affairs of the European Parliament. She said that any adjustment in monetary policy would be “gradual,” in contrast to other countries where a rapid tightening of policy is assumed, and that the ECB would remain “data-dependent.” While discussing the upside risks to inflation, she concluded with her belief in the “likelihood that the current price pressures will subside before becoming entrenched, enabling us to deliver on our two per cent target over the medium term.” This slightly more dovish tilt was negative for the euro.

While a lot of attention has focused on the wild movements in stock markets and the historic collapse of Meta Platforms Inc aka Facebook (the largest drop ever in terms of how much value they lost in a day), the movement of European bonds has been quite significant too. The graph below shows how a) European bond yields in general have risen more than bond yields in the US or UK, and b) peripheral Eurozone bond yields such as Greece and Italy have risen much more than core Eurozone such as France or Germany. This reflects fears that as the ECB winds down its asset purchase programs it may lose some of the flexibility necessary to support these markets.

Remember ECB President Lagarde’s ill-fated comment in press conference following the March 2020 ECB meeting in which she said “We are not here to close spreads, this is not the function or the mission of the ECB. There are other tools for that and other actors to deal with those issues.” The remark triggered the biggest fall in Italian government bond prices in a decade. She later backtracked, saying the ECB is “fully committed to avoid any fragmentation in a difficult moment for the euro area.” 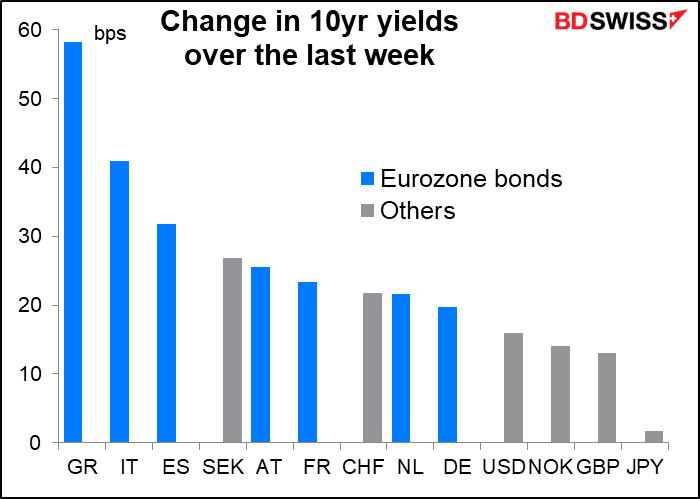 President Lagarde didn’t address the issue in her statement, but in the Q&A she expressed strong support for the periphery in answering several questions and said the ECB will use any instrument to ensure policy is transmitted to all member states. This limited but did not stop the damage to peripheral bond prices.

Nonetheless, the fear of widening bond spreads within the Eurozone may limit the ECB’s ability to normalize monetary policy. This could be negative for the euro if it means withdrawing support at a slower pace. 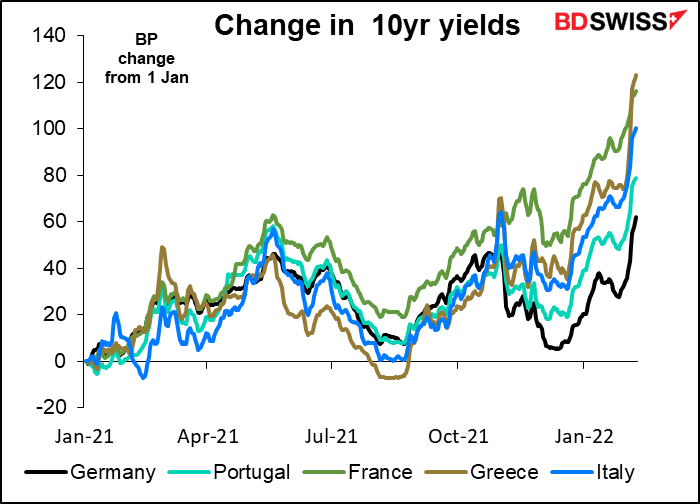 Today the focus is on trade data. That’s all we have on the schedule for today and early tomorrow in Europe, too. Trade data used to be huge for the FX market but nowadays financial flows are what matter – they’re the dog wagging the trade tail. However, trade does still matter for international capital flows so it’s still important for FX traders to monitor it.

The US trade deficit is forecast to hit a record high (or low actually since it’s a negative number, but never mind – I seem to be the only person who thinks in terms of graphs). This is no surprise though as the merchandise trade deficit, which came out last week, also hit a record (we should say wide or narrow for deficits and reserve high and low for surpluses). 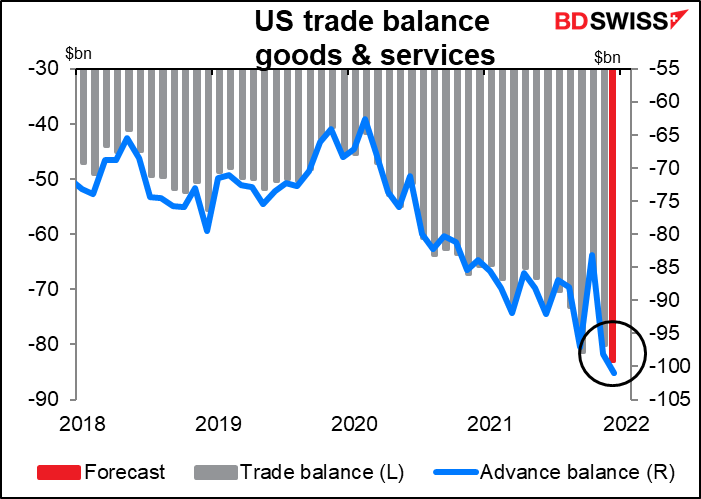 The US trade picture is worsening for both goods & services.

It’s not all oil, either. Imports are just rising a lot faster than exports. This is a function of the extraordinary fiscal & monetary policy support that the US government extended in the wake of the pandemic, which was larger than most other countries’. When US consumers get some money in their pockets they tend to go shopping and much of what they buy is produced abroad. 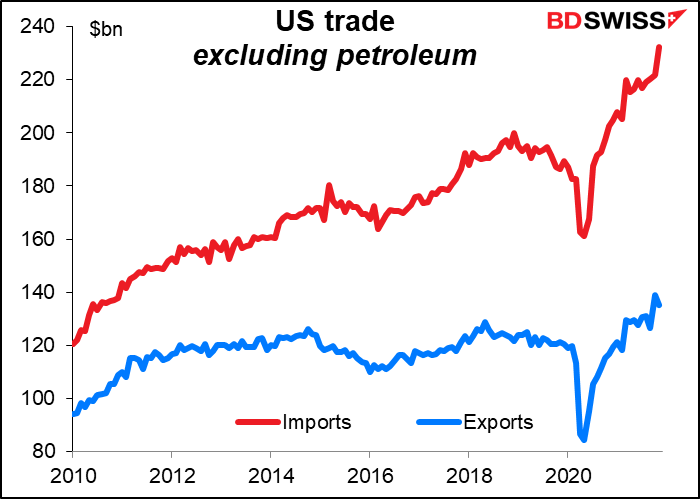 The widening US trade deficit is the conterpart of the increasing trade surplus in China, South Korea, and Malaysia. Germany is holding pretty stable (as we’ll see tomorrow morning). 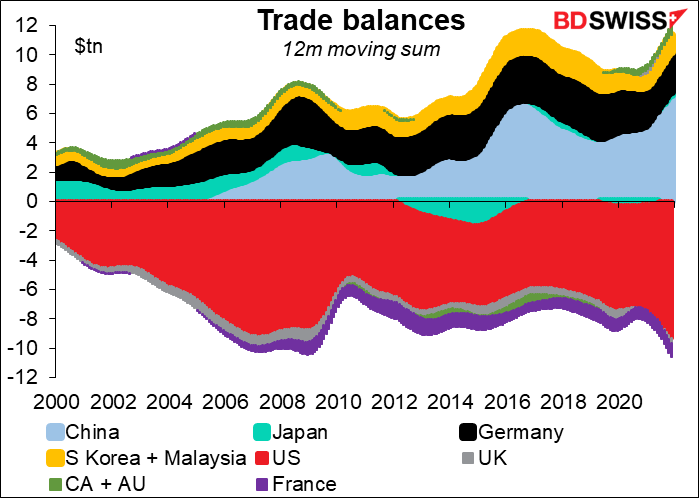 The value of world trade has been rising faster than the volume. That suggests a deterioration in the terms of trade for countries that are net importers as the things they import are getting more expensive. 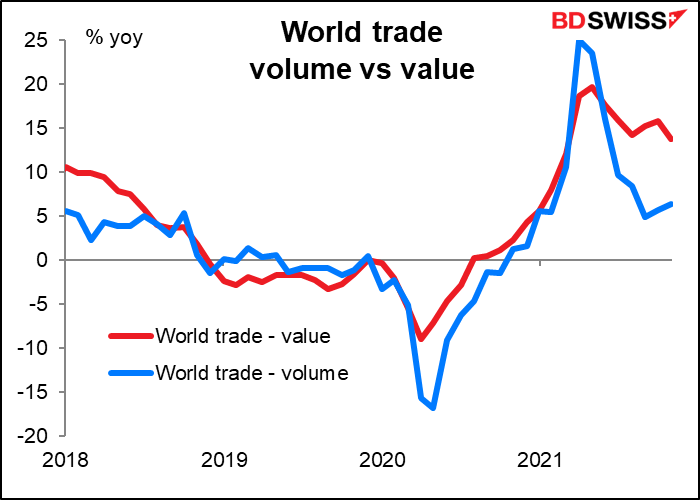 In theory that should be bad for USD and good for the commodity currencies and EUR, but as I said, financial flows and interest rates are more important to the markets nowadays.

Speaking of the commodity currencies, Canada’s merchandise trade surplus is expected to fall a bit. Last month was the highest level post-Global Financial Crisis. Energy prices were more or less stable during the month, which will hold down export growth. Meanwhile strong demand from households keeps pushing up imports. But will anyone in the markets care? I doubt it. 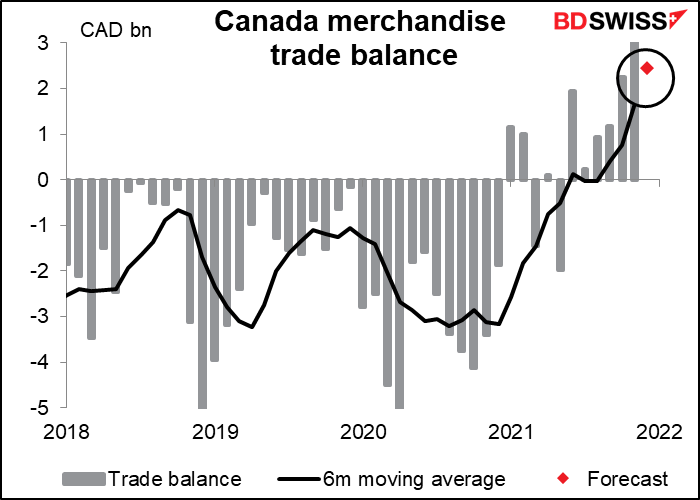 What’s going on? First off, the surplus in trade in goods has stopped rising. At the same time the surplus in services has been shrinking. So the trade surplus is falling.

Meanwhile, the primary income account – mostly investment income with some contribution from direct investment – flipped from a deficit to a surplus. Both contributed to the increase. I wonder how much of the direct investment is due to Brexit and companies transferring their operations to Germany from the UK or perhaps it’s German companies repatriating their foreign operations to shorten their supply chains in the face of the pandemic. The secondary income account –mostly German government payments to the EU – was an increasing drain on the current account surplus until recently, when it started to narrow. 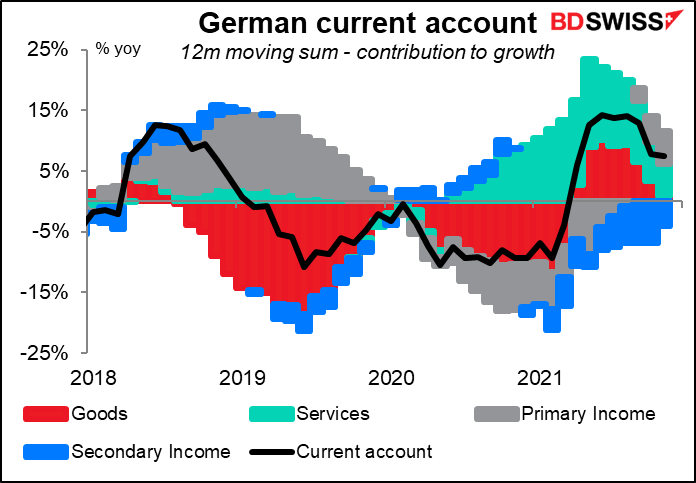 Although the rest of the Eurozone does make a small contribution to the current account suprlus. It’s this current account surplus that gives rise to the savings glut in Europe that is the fundamental underpinning for the euro. So while the market doesn’t necessarily make a big deal out of this data, it is important for the medium-term trend of the euro. 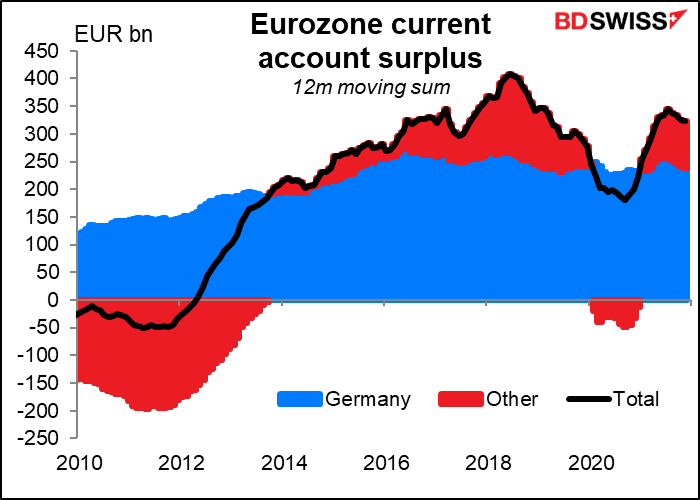 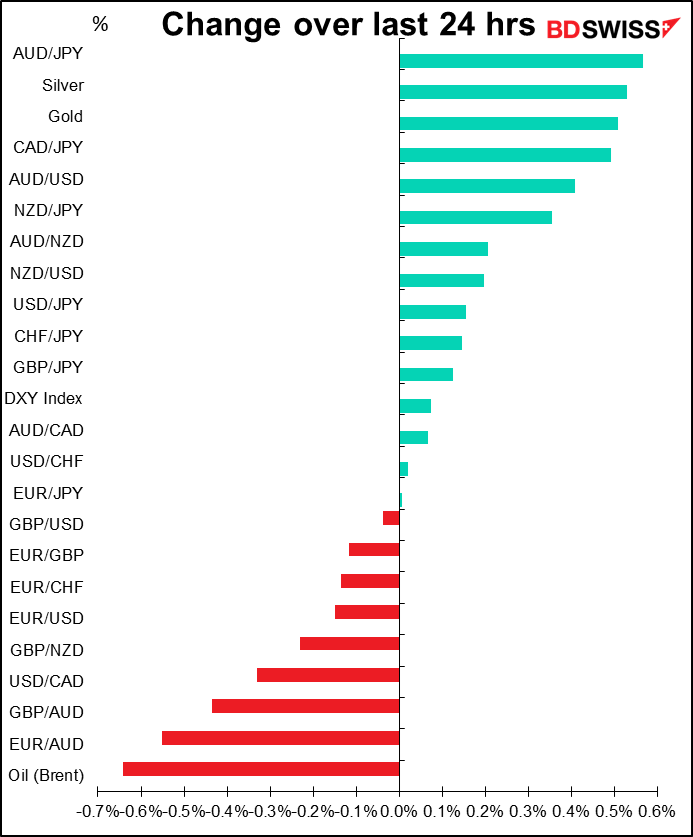