You are at:Home»Market Preview»AUD Up on Rate Expectations, Oil Down on Ukraine hopes; US Oil Inventories 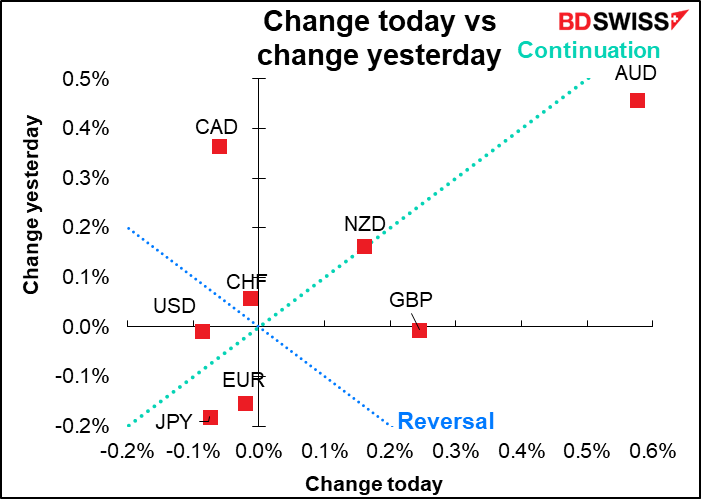 AUD led the pack higher yesterday in a continuation of the currency’s recent rally. Why? Remember that graph I had yesterday showing the change in 10-year yields? Let’s repeat it with Australia, New Zealand, and Canada included: 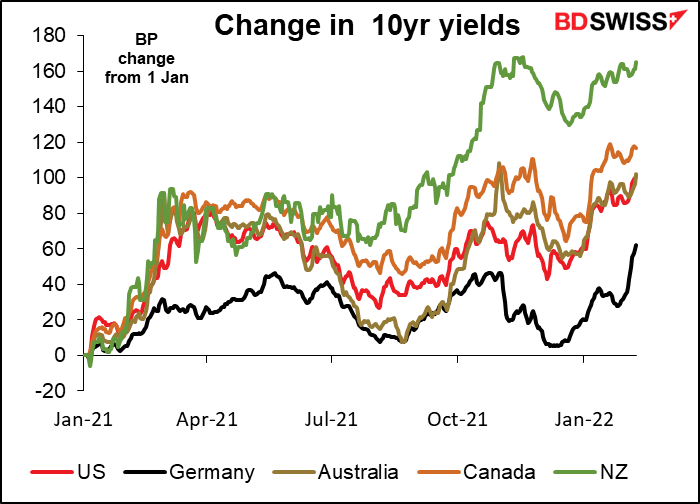 Australian yields were up significantly after economist John Edwards, a professor of economics who was on the Reserve Bank of Australia’s Policy Board 2011-2016, said in an interview that the RBA could raise interest rates four times in quick succession late in 2022. This raised expectations for just how high Australian rates could go. 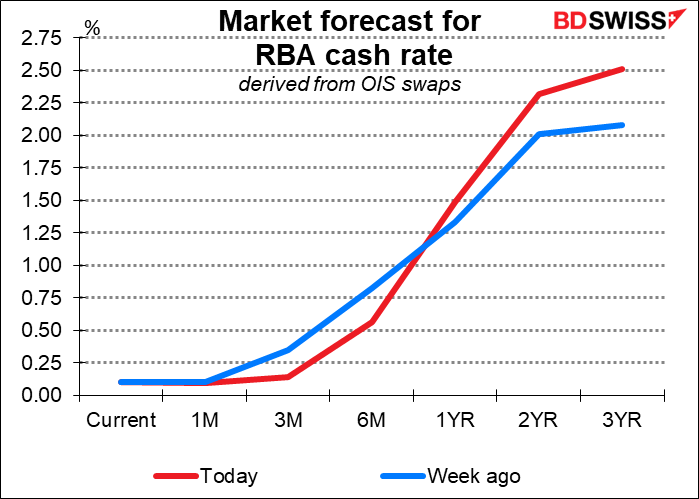 AUD shrugged off a sharp fall in iron ore prices after China renewed its fight against so-called “manipulation” of the commodities market and vowed to keep the market stable with more effective measures. My guess is that monetary policy tops everything right now, at least until we get more clarity on the outlook for RBA policy. RBA Gov. Lowe last week conceded that a rise in rates in 2022 was “a plausible scenario,” although they remain focused on 2023. 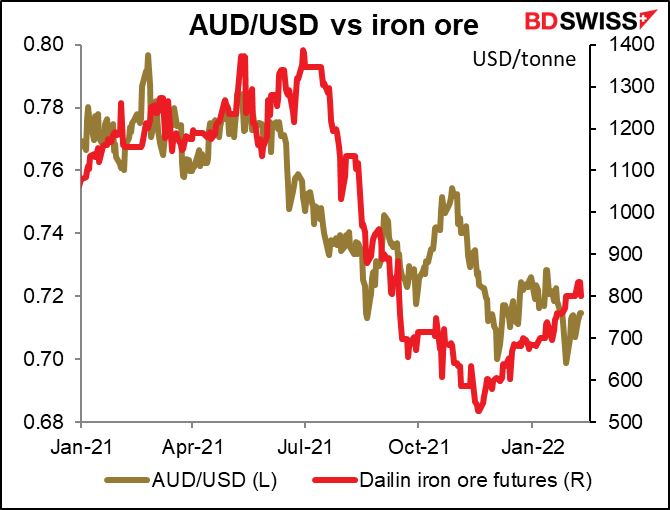 Oil is lower, which kind of surprises me. The reasons given on the wire seemed to be a) hopes for a settlement at the Iran/US nuclear negotiations. This would free up Iran to sell some 1.3mn barrels a more oil, which would no doubt be negative for the oil price. However I doubt if the Biden administration, which is already under fire for “caving” in Afghanistan, would risk looking weak on Iran. B) There also seems to be some hope of a peaceful settlement to the Ukraine crisis. That I think is more likely if Putin can get some victory to declare. 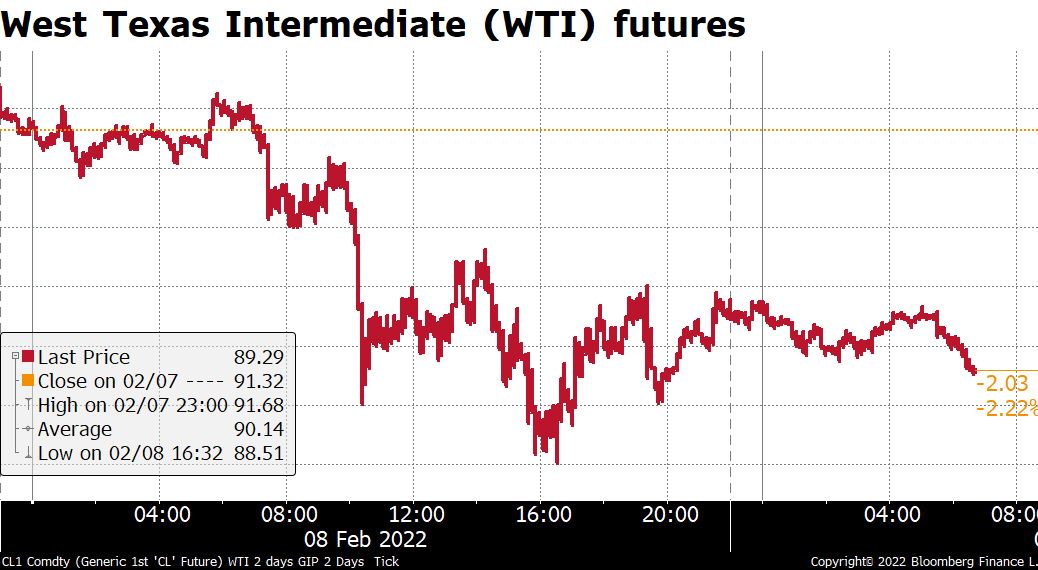 However I remain bullish on oil. The market expects the US Dept of Energy to announce a 1.5mn barrel (bbl) increase in inventories in the latest week, but yesterday the American Petroleum Institute (API) announced a 2.2mn bbl decrease. 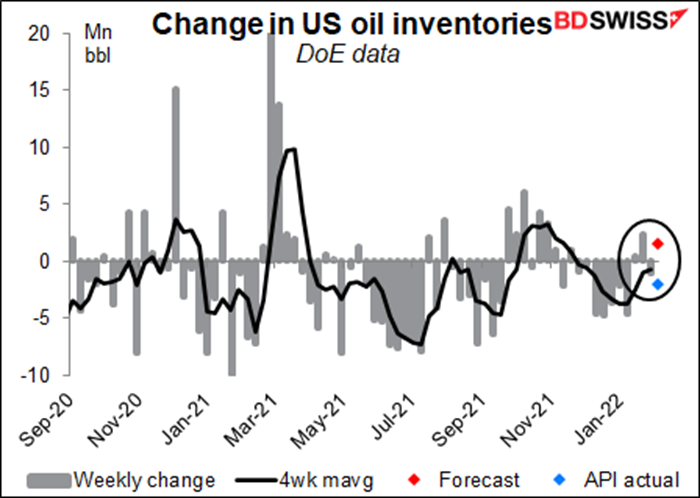 Inventories in the US are unusually low. Not the lowest they’ve ever been, but still low. 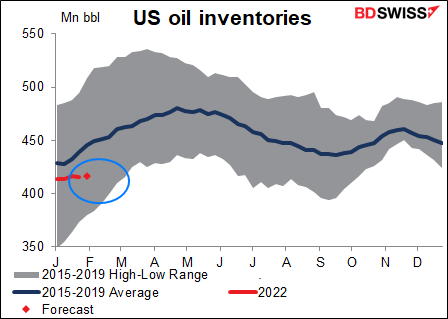 Meanwhile demand is extremely high for this time of year – as high as it ever was at this time during the five years before the pandemic. 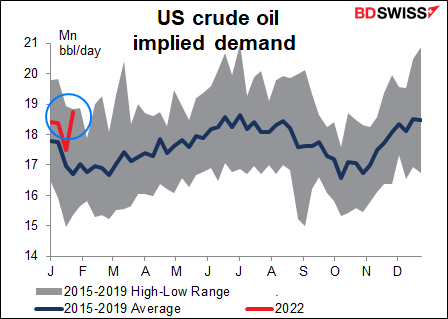 To make matters worse, inventories at the principal US distribution hub of Cushing, Oklahoma are nearing their minimum. The terminal can’t operate properly with under 20mn barrels in the tanks, and according to the API data it will have only 28mn barrels at the latest week.

This may be why the prompt time spread – the difference between the second and first futures contracts – has widened out so much. This figure shows how much extra people are willing to pay to get oil ASAP instead of waiting an extra month. It shows how desperate buyers are – and they’re now very despread. This is why I remain bullish on oil. It’s also why I prefer CAD to the other commodity currencies. Only one question about CAD:  will the truckers’ strike start to affect sentiment for the currency? The strike is now interfering with the transportation of autos & auto parts between Ontario and Detroit, which will force a lot of auto makers on both sides of the border to shut down production temporarily. Autos and auto parts account for almost 10i% of Canada’s exports, vs 23% for energy products. 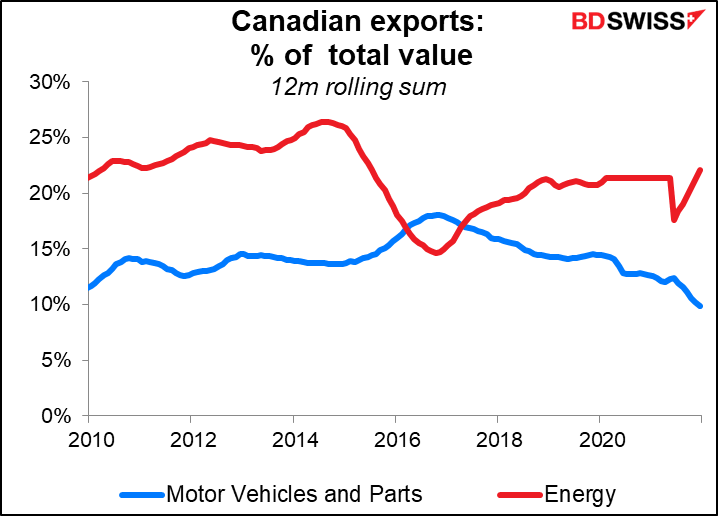 Not much on the schedule during the US and European days! Several speeches that will be picked over no doubt. How will BoE Chief Economist Pill explain punching the UK consumer on the nose with higher interest rates when the Bank itself is forecasting a record drop in real incomes? People would like to hear Bank of Canada Gov. Macklem say something about how he intends to shrink the Bank’s balance sheet, but is a talk on The role of productivity in fostering non-inflationary growth the appropriate venue?  Cleveland Fed President Mester is a known hawk. The last we heard from her was on Jan. 12th, when she said in a Wall Street Journal interview that “if things looked like they do today in March, I would support raising – lifting off from zero at that point.” They look better (or worse, depending on whether you’re focusing on employment or inflation) now so the question is whether she’d vote for a 50 bps hike in March, or how many hikes she sees during the year.

Overnight we’ll get the Japan corporate goods price index (CPGI), known elsewhere as the producer price index (PPI). It’s expected once again to show an unusually high rate of increase in producer prices, although less of an increase than in the previous two months (at least on a yoy basis). 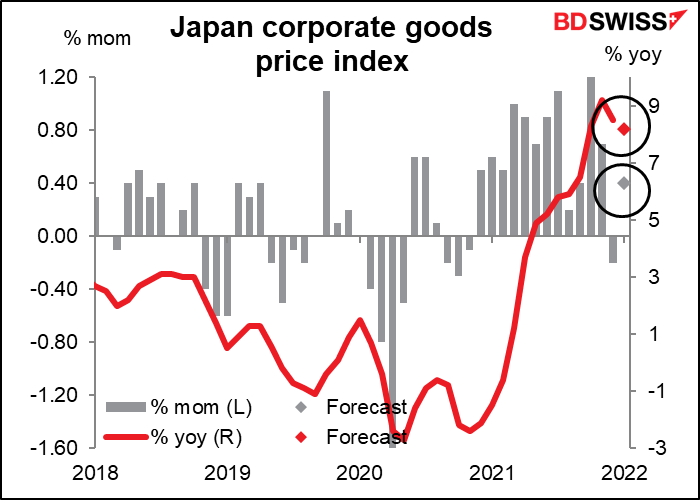 Now we’re all wondering: how long before the 8.5% yoy increase in the overall CGPI starts to feed through to the +0.8% yoy consumer price index in Japan?. The last time intermediate goods prices were rising at this rate, final goods prices were rising about 7% a year and the CPI was rising 8% a year. Or will companies just keep absorbing the higher prices in their margins? This is why this previously obscure indicator has recently become a hot one. 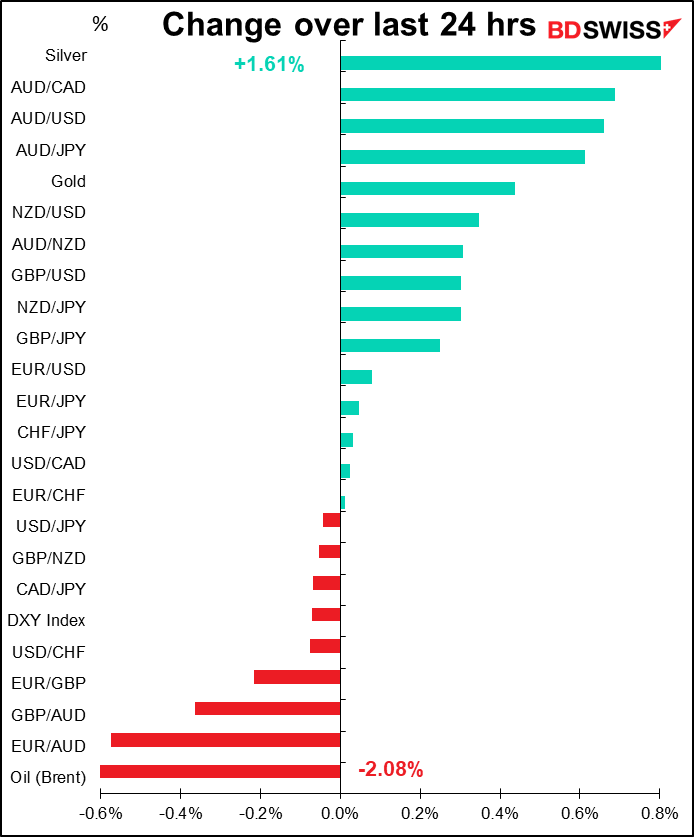