You are at:Home»Market Preview»Precious Metals Up, EUR Down on Ukraine Uncertainty: EU CPI, NFP 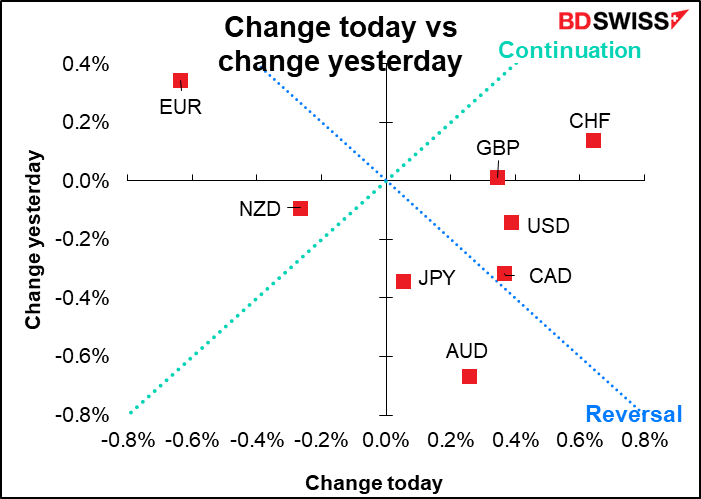 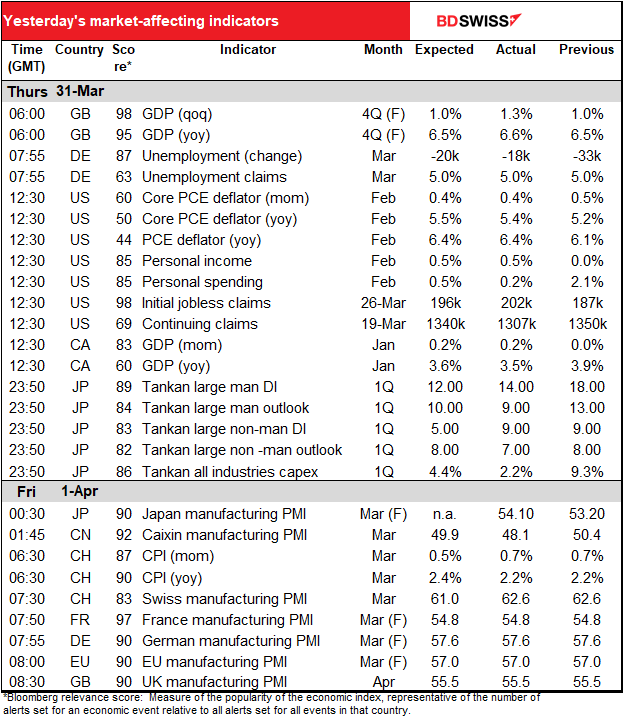 Oil was in the news overnight after the US announced plans to release 1mn barrels a day (b/d) from the Strategic Petroleum Reserve (SPR) for the next six months. US President Biden also announced measures to pressure domestic producers to increase output as well as easing regulations for transporting oil.

On the other hand, OPEC+ decided to stick with the plan and increase output by only the previously agreed 400k b/d (432k b/d to be precise), thereby thumbing its collective nose at the G7 request that they “act responsibly” and increase production. Apparently that was already in the price because the SPR release sent oil down. The International Energy Agency (IEA) will meet today in an emergency meeting and members could agree on a more general release from their SPRs too (see below).

One good bit of news for the energy supply: Russia and Europe reached agreement to allow European importers of natural gas to pay in euros and dollars as specified in the contracts, thereby avoiding a crisis where Russia would require importers to pay in rubles.

News on the war front was mixed. On the one hand, there are definite signs that Russian troops are moving away from various cities and important sites (such as airports and the Chernobyl nuclear plant). On the other hand, it’s not clear whether they’re retreating or just falling back to regroup in another part of the country. Negotiations are scheduled to resume today. The uncertainty weighed on EUR and pushed gold & silver higher while CHF gained vs both EUR and JPY.

Canada’s January GDP was in line with estimates at +0.2% mom but the preliminary figure for February showed a strong +0.8% mom recovery. It didn’t help CAD all that much; on the contrary USD/CAD rose (CAD weakened) immediately after the figure even though oil was strengthening. You can decide whether USD/CAD (red line) was reacting to the GDP figure or US oil prices (blue line). 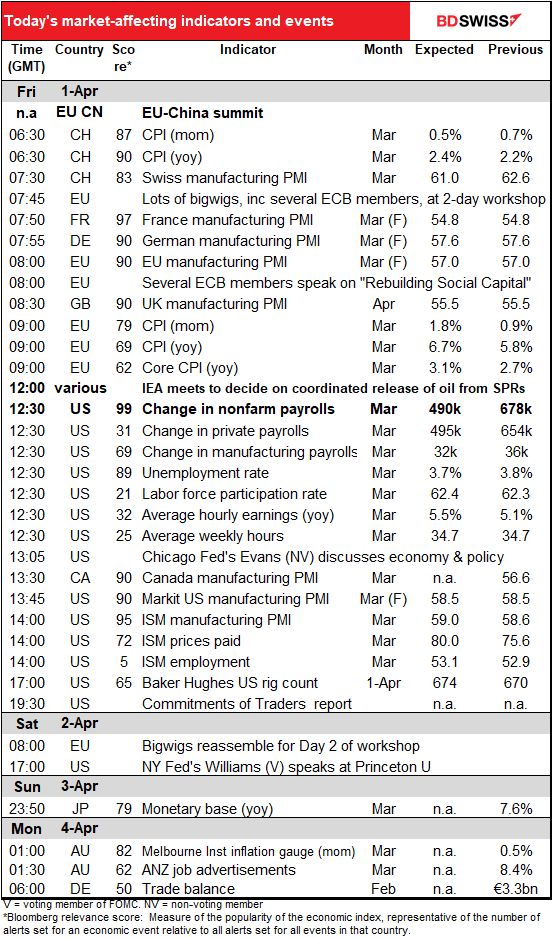 There’s an EU-China summit today. According to the European Council, website, Council President Michel, and European Commission President von der Leyen, plus High Representative (aka EU Foreign Minister) Josep Borrell, will meet Chinese PM Li in the morning and Chinese President Xi in the afternoon. “The main focus of the summit will be on the war in Ukraine,” according to the Council. The EU will try to get China on “the right side of history,” as Finnish PM Marin put it. “The EU will take the opportunity to stress the need to uphold the rules-based international order and universal values,” the European Council said.

There will also be an emergency meeting of the International Energy Agency (IEA) “to discuss the impacts of the collective action and assess the current oil market situation,” according to a spokesman for the Australian energy minister. This comes on the heels of yesterday’s decision by the US to release 1mn barrels of oil a day from their Strategic Petroleum Reserve (SPR) for the next six months. A collective decision to release more oil could send oil (and oil -related currencies) down even further.

There’s are also two financial conferences. One is a two-day conference on “The Outlook for the Economy and Finance” held by something called The European House in the Italian resort of Como. There are an incredible 36 speakers on the agenda, including some ECB bigwigs (Isabel Schnabel and Klaas Knot) and a number of financial market luminaries.

The other is a Banco de Portugal conference this morning on “Rebuilding Social Capital: the role of central banks.”  It doesn’t look like it’ll be germane for the markets, but since the central bank governors of Portugal and Ireland – who are also members of the ECB Governing Council – will be speaking, I have to put it on the schedule.

As for the indicators, we continue with the rest of the final manufacturing purchasing managers’ indices (PMIs) today, including the US Institute of Supply Management (ISM) manufacturing PMI. It’s not as accurate as the Markit version, I’d say, but it has a long and illustrious history in the US (back to 1948) so it’s closely followed. It’s expected to rise to 59.0, which would put it almost exactly the same as the Markit version of this indicator (58.5 preliminary reading). Interesting that businesses see things improving although consumer sentiment fell sharply during the month. 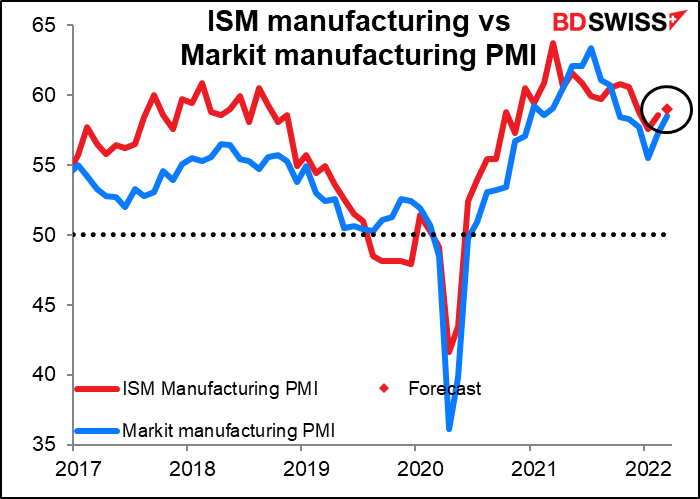 The new orders index is expected to be down a bit but from a relatively high level. This peaked in Dec 2020 and has been coming down slowly but is still above its long-term average (55.7, up to the pandemic). The prices paid index on the other hand is forecast to rise again. That had been coming down too but turned around in January – a worrisome sign! 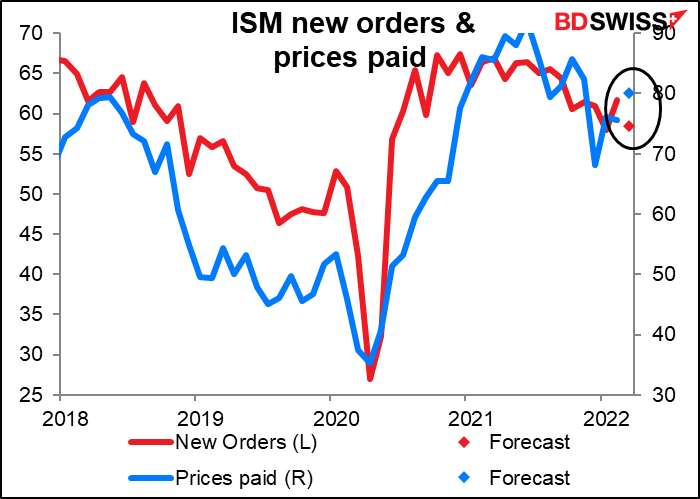 The Eurozone consumer price index (CPI) is unlikely to surprise the markets since Spain and Germany were out on Wednesday and France and Italy on Thursday. That’s 76% of the Eurozone right there. . Spain and Germany far exceeded expectations at 9.8% yoy (8.4% expected) and 7.6% yoy (6.8% expected). Brokerage economists will have plugged the numbers into their spreadsheets last night and come up with a pretty good estimate for today’s figure that’s probably far different from the published consensus forecast, which was based on earlier data.

Having said that, prices were expected to really jump even before the individual countries’ data was released. The forecast mom increase of 1.9% would be a record high increase (the previous record was 1.3% mom in March 2011). (Data back to 1996) That would put the 3-month annualized rate of increase up to 13.3% yoy. Hello? ECB? Anyone home? Christine? Your house is on fire! The figure could be positive for EUR, if it’s not discounted already. 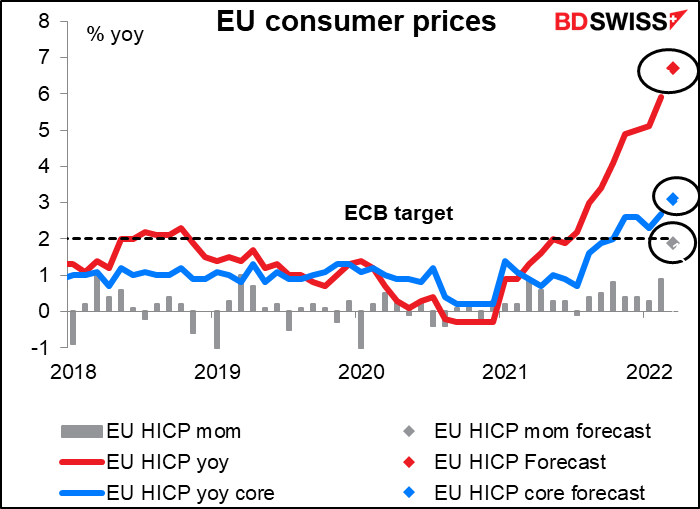 Then comes the indicator you’ve all been waiting for: the fabled US nonfarm payrolls (NFP). It’s expected to be up a solid 490k, which while not as impressive as last month would still be quite enough to reassure the Fed that they can keep tightening without disrupting the labor market.

The “whisper” figure, which is simply an informal poll of any Bloomberg subscribers who care to make a guess, is for a higher 529k. That suggests the downside surprise would be greater than the upside surprise. That’s understandable seeing as Wednesday’s ADP report came in at 455k. Although there’s no correlation between the ADP report and the NFP, people assume there is and so a good ADP report will boost expectations for a good NFP report. 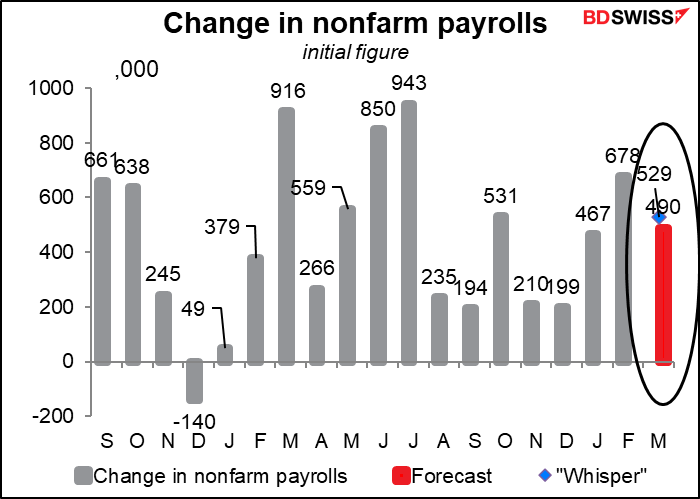 The unemployment rate is forecast to decline one notch further to 3.7%, not far off the 50-year low of 3.5% that prevailed before the pandemic. The participation rate is also expected to edge up. 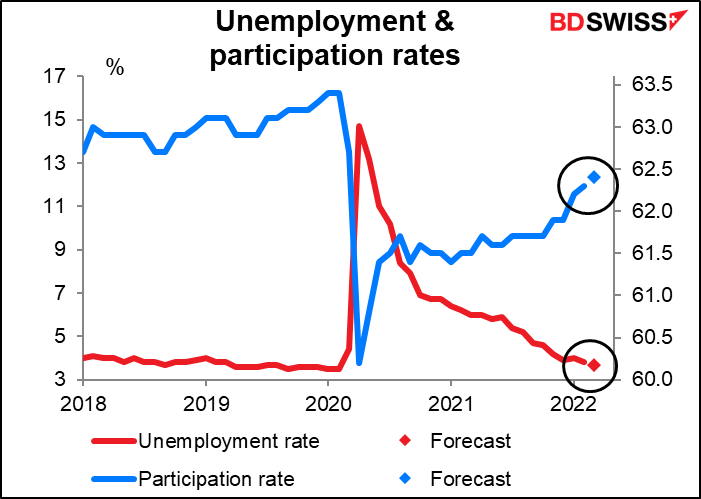 Growth in US average earnings is expected to slow slightly. In some countries (notably Britain) the central bank has been expressing concern about wage increases causing a wage/price spiral, but I don’t remember hearing much about that issue in the US. Wages growth is still well below the inflation rate. 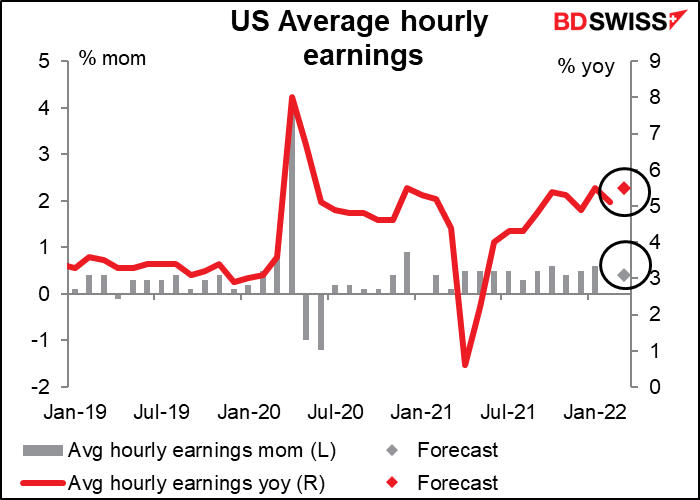 Besides, most of the gains are going to lower-waged people who deserve them after years of near-serfdom at the hands of greedy capitalists who sit on their yachts smoking big cigars while their workers toil away for starvation wages. Walmart for example reportedly has 14,500 employees who receive food stamps, government supplementary payments to help them buy food. 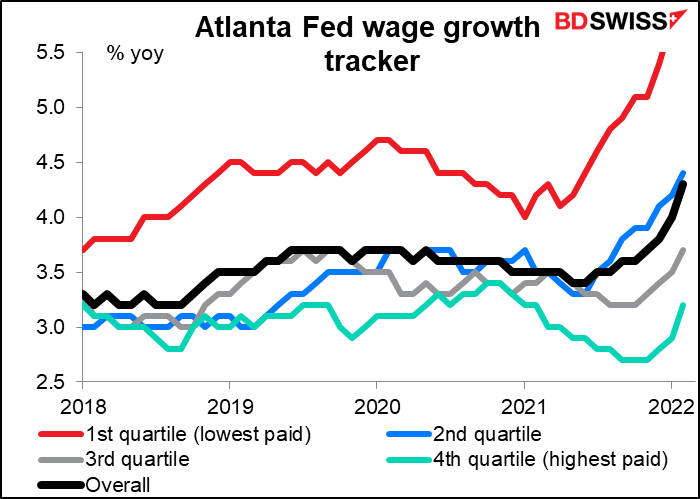 Average weekly hours are also expected to pop up one tick as the number of virus cases in the US falls and people go out more. This statistic is generally ignored but is really quite important for the economy because there are a lot more people working than not working, so if the people working work for even a little more each week it can put a lot of purchasing power into the economy. The rule of thumb is that an additional one-tenth of an hour on the weekly workweek is equivalent to about 250k new jobs in terms of aggregate income. 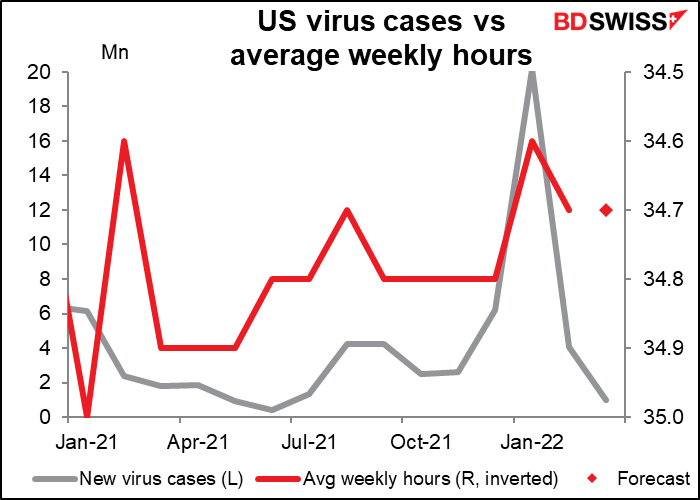 USD shows a strong and consistent response to the NFP. The graph below shows the “surprise” in the actual figure (how many standard deviations the actual figure is away from the consensus) on the X-axis (horizontal) and the % change in EUR/USD on the Y-axis (vertical). The R-squared is a measure of the correlation between the two – if they were perfectly correlated it would be 1, if there were no connection at all it would be zero. The red dots are after 5 minutes, blue dots after 10 minutes, and grey after 1 hour. You can see that there is a strong and lasting correlation between the surprise and the change in EUR/IUSD, with a positive surprise being associated with a fall in EUR/USD (strengthening in the dollar) as one would expect. 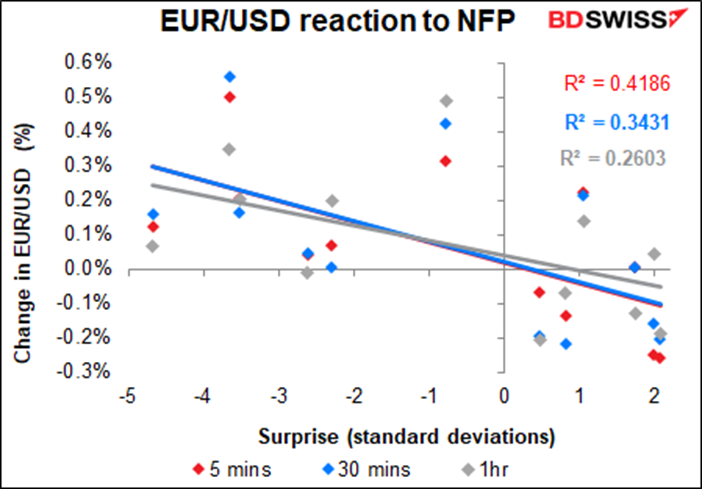 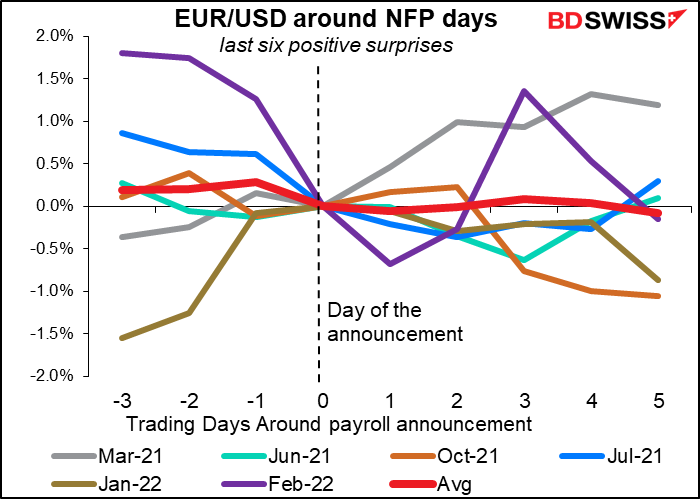 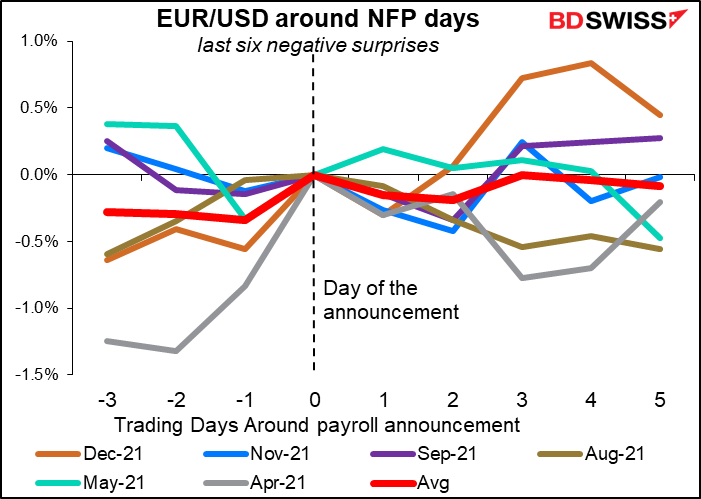 When it misses estimates though EUR/USD tends to fall even more clearly! I’m at a loss to explain this. I can only guess that perhaps EUR/USD does rise (USD weakens) in the immediate aftermath of the figures, as we saw with the one-hour response above, and perhaps dollar bulls feel that the retreat makes for a good entry point for a short EUR/USD position. 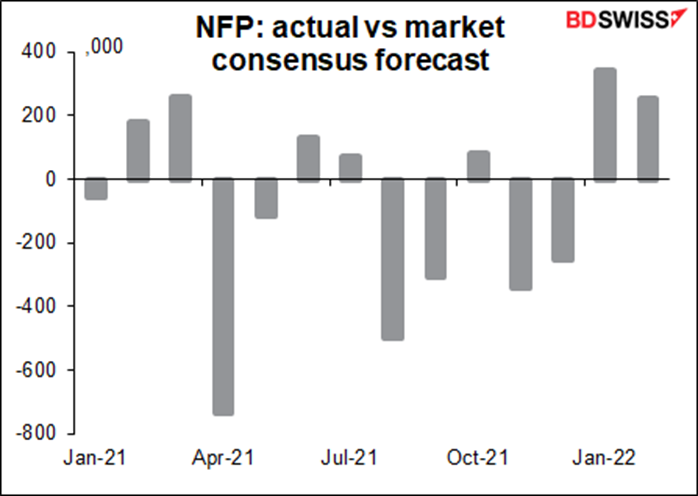 As for how often it misses or beats estimates…so far since Jan 2021 it’s 50-50. It seems to beat twice then miss twice, but not always. And remember that past performance is no guarantee of future performance. 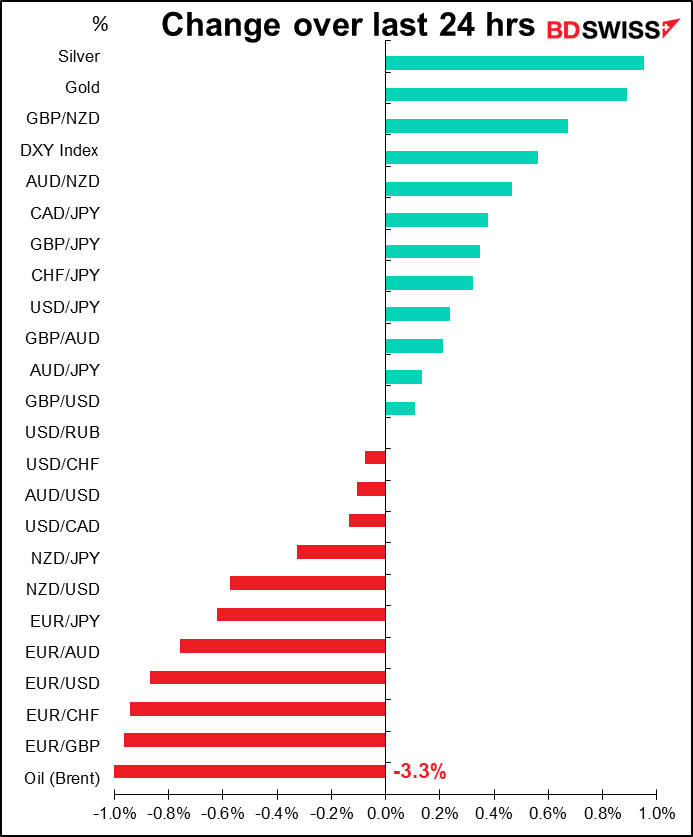