You are at:Home»Market Preview»AUD Up in Largely Calm FX Market; RBA Meeting 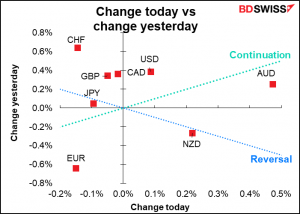 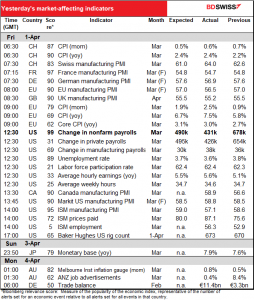 First a word about Friday’s US nonfarm payrolls…as you can see from the table above, most of the figures were largely in line with expectations. Although the overall rise in jobs was less than expected, previous months were revised up and besides, over 400k jobs isn’t bad at all. This was the 11th consecutive 400k+ rise in jobs which is the first time ever for such a strong streak in data going back to 1939! Moreover many of the details, sch as minority employment, are rapidly returning to pre-pandemic levels such that the Fed can be confidentt that not only has it achieved their required  “maximum employment” but also their self-imposed requirement of “broad and inclusive” employment.

Given the strong employment data, bonds sold off with the 2yr/30yr yield curve inverting for the first time since 2007! What this suggests is that people think the Fed is likely to tighten so much that it’s liable to wind up sending the US economy back into recession. That would require them to loosen policy again. This may be why further evidence of future Fed tightening isn’t giving the dollar the support that one might expect. 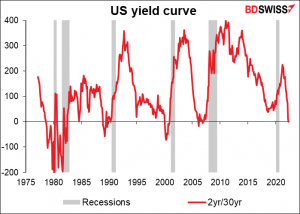 AUD was the big gainer ahead of tonight’s Reserve Bank of Australia meeting. See below for my thoughts on that meeting.

Speculators went increasingly long USD. They either went less long or more short the currency except for small reductions in short MXN and AUD. The #1 mover was JPY, which alone accounted for 77% of the total change in net USD positions. This coincided with the Bank of Japan’s decision to hold the line with its yield-curve control (YCC) policy and emphatically intervene to keep 10-year Japanese Government Bond yields below 0.25% even while yields are exploding higher elsewhere in the developed world. 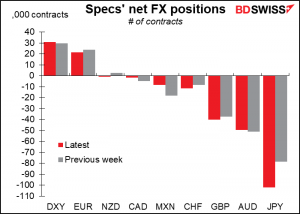 While specs have increased their short JPY positions, they’re nowhere near maxed out yet. There’s still room to get on the bandwagon! 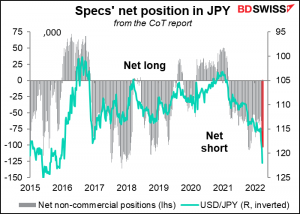 Hedge funds became more bullish GBP and more bearish JPY and AUD. It’s significant that AUD and JPY are no longer being seen as opposites. That means a change in the behavior of AUD/JPY, which is usually considered the best risk barometer in the FX market. 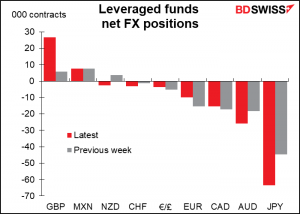 Retail on the other hand increased several long currency positions, including long EUR, CAD, and especially AUD, while trimming their short JPY position. I guess it’s different views like that that make a market. 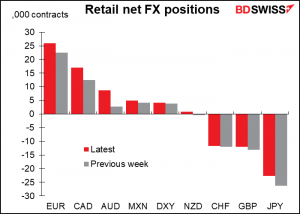 Every week I write about what’s happening with specs in gold and silver, but the answer usually is “not much.” No difference this week. A small increase in longs. 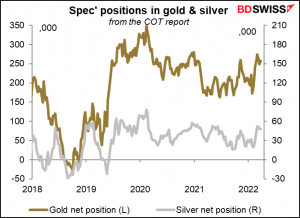 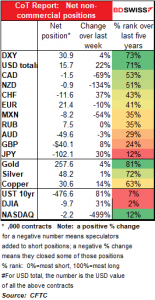 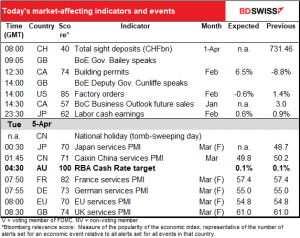 Not that much on the schedule for the US and Europe today.

The Swiss National Bank (SNB) has been more active in the FX market recently, as you can see not only from the latest week’s increase in Swiss sight deposits (in red) but also the four-week moving average, which has gone up considerably. Notice that EUR/CHF stabilized over the last week. Does the market think the pair has reached an appropriate level for now or was it due to “supernatural forces” working in the market? We’ll see. 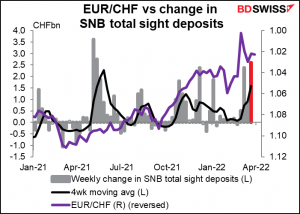 Otherwise, Bank of England Gov. Bailey speaks today, but he spoke last week too so who cares? He’s not going to say anything different. Of more interest will be Deputy Gov. Jon Cunliffe, who was the lone dissenter in the March vote – he wanted to keep rates unchanged. It should be interesting to hear his rationale and whether he still thinks that way and if he expects to vote the same way at the May 5th meeting, when the market expects another 25bps hike (at least).

US factory orders are one of the more boring indicators I have to write about every month, because they’re largely a function of the durable goods orders that come out a week or so earlier (92% correlation). Durable goods orders were down 2.2% mom so guess what’s expected to be down 0.6% mom? 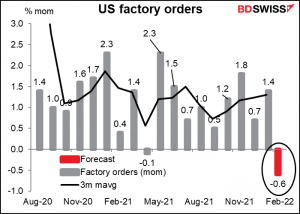 Perhaps the only more boring indicator is Japan’s labor cash earnings, which should be important since wage indicators are important everywhere else – the US and UK for example, while in Australia they’re the main thing the Reserve Bank of Australia is looking at (see below). But in Japan, where former PM Abe’s attempt to get a wage-price spiral going in 2013 failed miserably, they’re of little consequence. 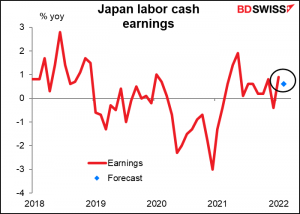 Now we finally get to today’s main event: the Reserve Bank of Australia (RBA) meeting. The RBA meets 11 times a year as opposed to 8 times for most other central banks so we wind up talking about them more. They’re a bit unusual right now because while other central banks are at least thinking about tightening, they’re resolutely on hold. Their mantra is, “The Board is prepared to be patient as it monitors how the various factors affecting inflation in Australia evolve.”

The market doesn’t believe them a bit however. The market is forecasting a rate hike by June with a chance of May and a hike at every meeting thereafter this year. Big big difference! 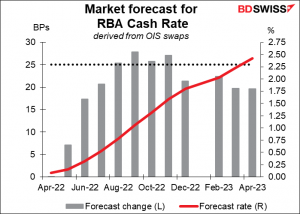 This meeting there’s not likely to be any change. Their main focus seems to be on wages, and no wage data has come out since the last meeting on March 1st. (The last release was Feb. 23rd; the figures are quarterly so the next release is May 18th.) There was one set of employment data, which was good (unemployment dropping to 4.0% from 4.2% with the participation rate rising) but that probably won’t be enough by itself to change policy The inflation data too is quarterly and the next figure won’t be out until April 27th.

Nor are they even going to decide on what to do with the mountain of bonds that they bought during their yield-curve-control and quantitative easing periods, a topic that they said they’d tackle at the May meeting.

So why should we bother even reading the press release afterward? We’re looking for two things: 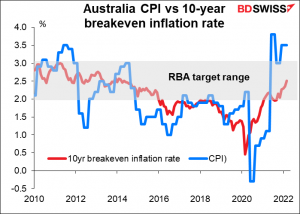 Either change – the elimination of the “prepared to be patient” line or the addition of comments about “inflation psychology” – could be the signal for a change in policy at an upcoming meeting. It would therefore be bullish AUD. 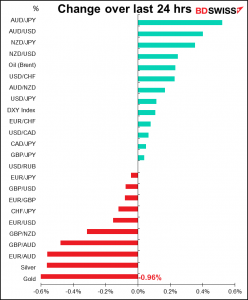