You are at:Home»Market Preview»USD Up on Jobless Claims, PCE, CAD Up With Oil; light schedule today 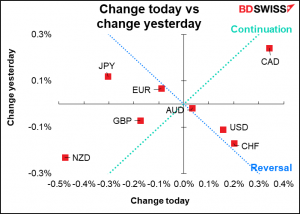 As one economist quoted in the paper said, “It is fair to say that we didn’t see that coming.” After weeks of tiny changes in the US initial jobless claims, they suddenly plunged by 71k to 199k, the lowest level since November 1969 (data back to 1967). 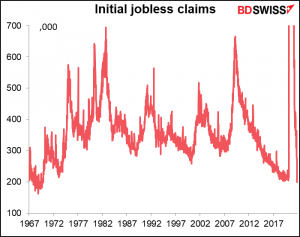 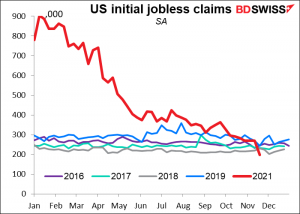 That’s particularly remarkable since the figures are not adjusted for population growth. As a percentage of the population, they’re at a record low. 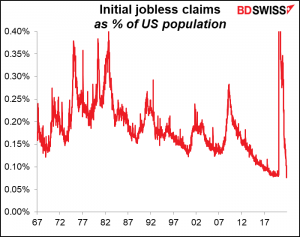 Before the pandemic there had been only six times when they fell by more than that in absolute terms. Even more remarkable, this was the largest fall on record in percentage terms.

As I pointed out yesterday though much of this improvement may be because the seasonal adjustments aren’t working anymore due to structural changes in the labor market (and global warming, too). If we look at the unadjusted figures, they certainly are at the bottom of the recent range but they’re not outside it, as the seasonally adjusted figures are. The seasonal adjustment “expects” large layoffs in the construction industry this time of year as the cold weather starts. However it’s not as cold as usual and with housing in great demand, the expected layoffs didn’t occur. In fact if you look carefully at the not seasonally adjusted (NSA) figure, you’ll see that without seasonal adjustment, claims rose by 18.2k 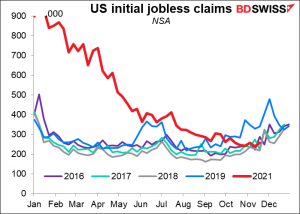 Nonetheless there’s no doubt that these are exceptional figures. The Fed has made it clear that they think they’ve hit their inflation target, now they’re just waiting to achieve “maximum employment.” These kinds of figures will reassure them that the labor market is indeed nearing maximum. It makes it more likely that the Dec. 15 meeting of the rate-setting Federal Open Market Committee will vote to accelerate the pace of tapering down their bond purchases and therefore they can start hiking rates earlier than the market expected.

Indeed, San Francisco Fed President Daly, a voting member of the rate-setting Federal Open Market Committee (FOMC) and one of its biggest doves, said in an interview with Yahoo! Finance that if the strong jobs growth and high inflation (see below) continue to show up in the data before the December meeting, “then I would completely support an accelerated pace of tapering.” “I am very open and, in fact, leaning towards that we’ll want to raise rates from the zero lower bound at the end of next year.” If even she’s thinking that way, then the consensus on the FOMC has most likely shifted.

Reflecting that idea, the probability of a rate hike in May went above 50% for the first time. 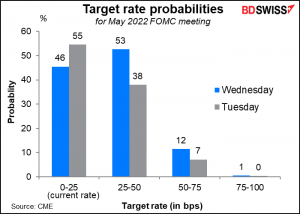 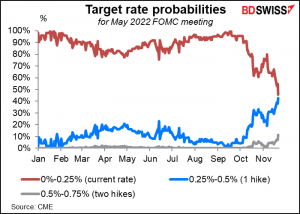 An earlier start to the hiking cycle increases the odds of three rate hikes next year. Rates rising higher than expected more rapidly than expected is positive for the dollar.

The figures set us up for a slam-bang US nonfarm payrolls figure next week, although the payroll survey wasn’t done during this week, it was done during the previous week (it’s done the week that has the 12th of the month in it).

Separately – but equally significantly — the US personal consumption expenditure (PCE) deflators showed inflation continues to soar past the Fed’s 2% target. The data came in almost exactly as expected. The headline figure was a bit less (+5.0% yoy vs +5.1% expected, 4.4% previous) but the core PCE deflator, which is the more important one, was spot on at +4.1% yoy (3.6% previous). These levels are of course outrageous compared to the Fed’s 2% target. 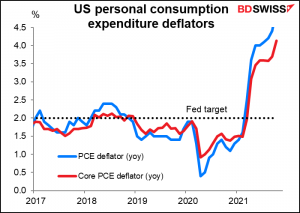 The details were mixed. According to the San Francisco Fed’s breakdown of the cause of the rise into components that are sensitive to COVID-19 and not sensitive, 40 bps of the 44 bps increase in the core PCE deflator was due to items that are sensitive to COVID-19 and only 6 bps due to those that aren’t (figures don’t add due to rounding). That suggests inflation could indeed fall back after the economy has adjusted to the changed patterns of supply and demand. 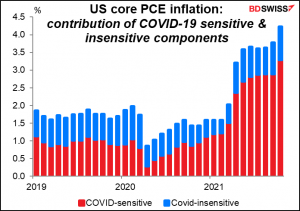 The price of goods that didn’t react to COVID-19 are rising at 2.48% yoy, only slightly above the Fed’s 2% target, while those that are sensitive are soaring 5.3% yoy. 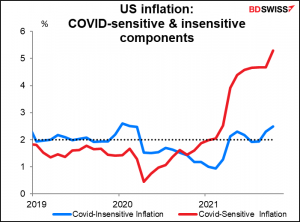 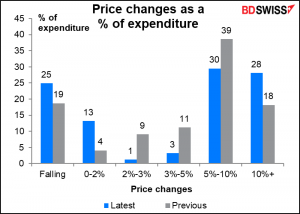 In Europe, Germany’s Social Democratic Party (SPD), Greens, and Free Democratic Party (FDP) finally agreed on the terms of a coalition. The talks have been dragging on since the election on Sep. 26. The party memberships have to ratify the deal, but that seems assured and SPD head Olaf Scholz is likely to become Chancellor the week after next, bringing Chancellor Merkel’s 16-year tenure to a close.

As for the substance of the talks, the SPD got its rise in the minimum wage; the Greens secured a minimum price for CO2 emissions, which they expect to hasten the exit from coal; and the FDP will run the Finance Ministry and restore the constitutional “debt brake,” which has been suspended during the pandemic (as well as preventing tax hikes).

The change comes at a difficult time for Germany as virus cases soar far above previous levels. The government discussed but rejected the idea of a two-week lockdown. If Germany does impose a lockdown, it would mean significantly less economic activity in Europe and less demand for oil. That would be negative for EUR and negative for CAD. 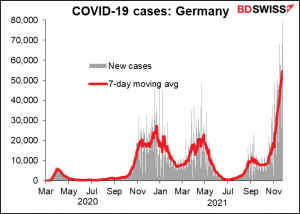 Speaking of which, this is supposed to be an FX comment not an economics comment, so I should discuss the movement of the FX market too, but the major movements are largely self-explanatory so no big deal. CAD rose along with oil as the market was surprised by the smaller-than-expected release from global Strategic Petroleum Reserves, as I mentioned yesterday. It somewhat outperformed oil though as it rose (USD/CAD fell) along with oil but then didn’t retreat along with oil.

CHF also gained, probably as a counterpart to EUR weakness. The Swiss National Bank has shown it’s only interested in smoothing, not stopping, the decline in EUR/CHF and Swiss investors aren’t stupid – they’ve seen this movie before and they know how it ends (0..9902 on a closing basis, but 0.8517 on an intraday basis on Jan. 15, 2015).

Meanwhile NZD continued to weaken after the dovish Reserve Bank of New Zealand (RBNZ) meeting, where the minutes showed they ruled out 50 bps hikes. 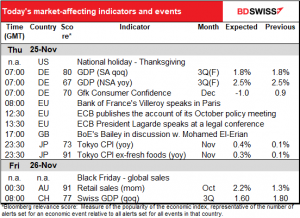 After yesterday’s packed calendar, we can take it easy today. We Americans will be eating turkey or tofurky, according to our preferences. Personally I’m doing intermittent fasting, which means I may not eat anything at all today. Except usually on a Thursday I get frustrated with my weekly and wind up snarfing down two or three chocolate muffins – intermittent gorging, not fasting.

About the only thing of interest during the European and US days will be the accounts of the Oct. 28th European Central Bank (ECB) Governing Council meeting. They didn’t really decide much of anything at that meeting. Nonetheless, the minutes may give us some insight into the views of the council members on what they’re thinking about inflation – whether they still believe their staff’s forecasts and think that the current high level of inflation is just transitory. Several Governing Council members have recently mentioned the upside risks to inflation. I’ll be interested to see whether this hawkish turn is a recent change or whether it was part of the October policy debate. ECB President Lagarde sounded a bit more worried than usual about inflation during her press conference, but she also pushed back at the market’s assumption of an early hike in rates.

Overnight, Japan announces the Tokyo consumer price index (CPI). But even with energy prices surging, Japan’s inflation is only expected to creep slightly higher, while “core-core” inflation – excluding fresh food and energy – is expected to remain in deflation. It’s not likely to cause any bells to ring at the Bank of Japan nor cause anyone to change their view on Japan.. 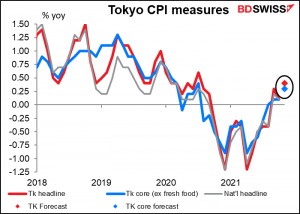 Australia reports its retail sales. They’re expected to be up on a mom basis as restrictions were lifted in New South Wales from the middle of the month and slightly later in Victoria. I don’t think this kind of data will have much of an impact on the markets until next month, after restrictions are lifted and we can get a clearer idea of the trend. 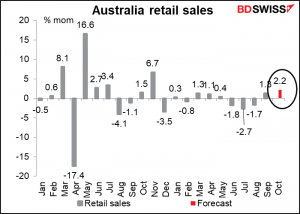 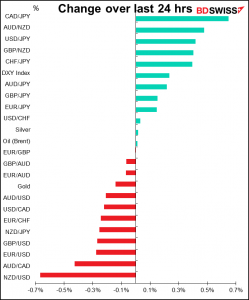