You are at:Home»Market Preview»JPY Up, Commodity Currencies Down in “Risk-Off” Move; OPEC+, US Jobless Claims 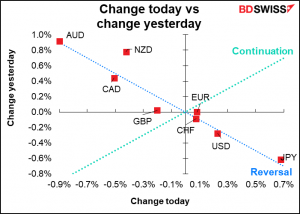 FX market moves today look like a typical “risk-off” basket move, with JPY up and the three commodity currencies down, led by AUD.

There’s no reason related to Australia’s economy in particular why AUD should be down the most – on the contrary, yesterday’s Q3 GDP report was much better than expected (-1.9% qoq vs -2.7% qoq forecast) and the October trade balance this morning was in line with expectations at AUD 11.22bn (11.15bn forecast). And with inflation expectations falling, five-year real yields were higher. So go figure.

In the background of course is the wait for clarity about the new Omicron variant of the COVID-19 virus. As I’ve said many times, I’m not a doctor so I’m not going to delve into the details of that – I’m sure you can find more reliable sources of information. My impressions so far are that it may spread more rapidly than previous variants but also seems to result in less serious illness, which could overall be a good thing – it may transform COVID-19 into just another omnipresent virus, like the common cold. Particularly if infection with this variant boosts immunity to other variants it could turn out to be a blessing. Or it could decimate global populations, raining down death on a scale not seen since the Black Death killed off 30%-60% of the people of Europe in the 1300s. Who knows? Not me.

The confusion was evident in conflicting comments we got yesterday. World Health Organization (WHO) chief scientist Soumya Swaminathan said, “We know that vaccines are likely to have some protection. We still need to find out if there’s any loss of protection, but we think vaccines will still protect against severe disease as they have against the other variants.” But the CEO of Moderna, a manufacturer of one of the vaccines, wasn’t optimistic.  “There is no world, I think, where [the effectiveness]is the same level…we had with Delta,” he said. Perhaps these comments aren’t really so different; Dr. Swaminathan was talking about protecting against “severe illness,” not preventing infection entirely.

There’s been a major jump in COVID-19 cases in South Africa. So far the number of cases is still low compared to previous peaks, but as everyone now knows, that can change quickly when you’re dealing with exponential growth. 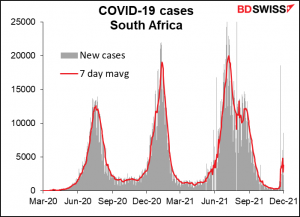 Elsewhere, Fed Chair Powell appeared again in Congress. He could’ve taken the opportunity to correct any misunderstanding about what he said on Tuesday, but instead he doubled down on it. “We’ve seen inflation be more persistent. We’ve seen the factors that are causing higher inflation to be more persistent,” he said. No more “transitory.”

The market has expected the first rate hike to come in June, but the odds of a May hike are increasing. That’s positive for the dollar. 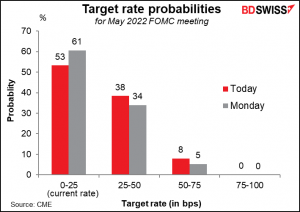 Meanwhile, we’re still waiting to hear about the possible US government shutdown tomorrow. Politico reported that the state of talks didn’t improve yesterday as the Republicans are threatening to use their procedural powers to trigger a brief weekend shutdown in protest over President Biden’s vaccine mandate. You can see that the risk premium on T-bills maturing in the next few days has jumped significantly. 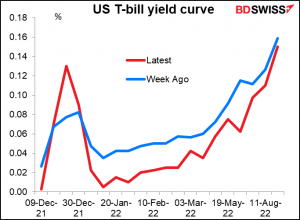 I’m not sure a shutdown would be that important for the dollar as long as it didn’t drag on. The markets are used to these kinds of shenanigans and realize it’s largely political theater. But if it looks like lasting, then we could be in for further risk aversion and a lower dollar. 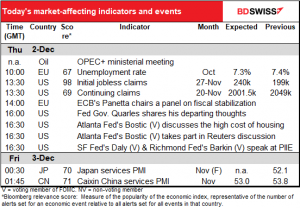 Two big things on the schedule for today: the OPEC+ ministerial meeting and the weekly US jobless claims.

OPEC ministers alone met yesterday, but they apparently focused on administrative matters and deferred the discussion on output to today’s meeting. They’re discussing who to make the new Secretary-General and pushed back the discussion until January.

Monday’s meeting of the OPEC+ Joint Ministerial Monitoring Committee was “postponed to get more information about the current events, including the new virus strain,” according to the Russian Deputy PM. We’ll be waiting today to see what they decide to do in reaction. I think there’s a good chance they could decide to pause their planned 400k barrel-a-day increase in output in response to the Omicron virus, not to mention the planned release of some 60mn barrels of oil from six countries’ Strategic Petroleum Reserves (SPR). 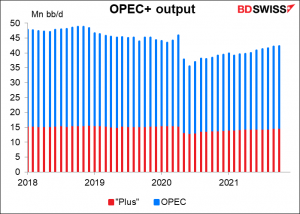 Oil prices have plunged recently as capitulation trades – speculators giving up on hopes of higher prices and selling – pressured options dealers into selling futures to hedge their exposure. Oil is now down about 15% from before the variant was announced.

The Chicago Board Options Exchange (CBOE) index of oil price volatility rose to levels only seen a few times before. 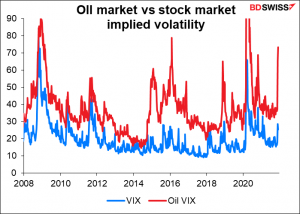 I believe the market has gone too far. The recent decline in prices discounts a much more serious lockdown than is politically feasible anymore, IMHO. People in many countries are nearly in armed rebellion against lockdowns, and in the US it’s a non-starter in most areas. Furthermore, the Iranian sanction talks aren’t going well, which is likely to remove the prospect of over 1mn b/d coming onto the market.

In this context, OPEC+ deciding to pause its planned increase may act as a “circuit-breaker” and help to pause the decline in prices, but it will probably take some clarity on the impact of the Omicron variant to push prices back up.

Next up are the US jobless claims, including the no-longer-dreaded initial jobless claims. They stunned and shocked the global financial markets last week when they showed a tremendous 71k decline. That was largely (but not entirely) because of the seasonal adjustments, which anticipate a large number of layoffs in the construction industry as the weather gets colder. This year the weather didn’t get as cold and with the housing market so hot, people kept working. Result was that the seasonally adjusted figures showed a big decline even though the unadjusted figure rose.

This week, economists who got it totally wrong last week are looking for some payback, an increase in claims of 41k. 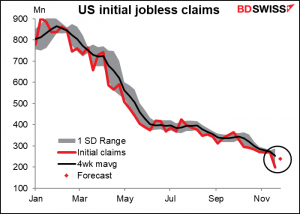 Still, the forecast of 240k claims would be well within the range of recent years, meaning the labor market is back to normal in at least one respect. 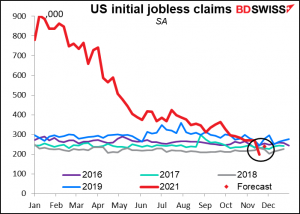 Continuing claims, which most people don’t really care about, are expected to continue their steady decline. 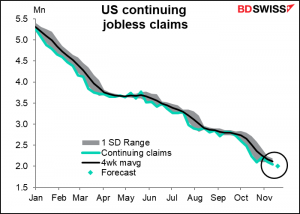 Then overnight we start the service sector purchasing managers indices (PMIs). These are more important nowadays than the manufacturing sector, because the service sector has been hit harder by the pandemic. But people don’t pay that much attention to the Japan and China versions, as manufacturing is considered more important for those economies. So stay tuned for Friday morning. 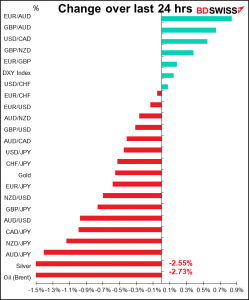