Last week’s Weekly Outlook was “The Reflation Trade is On.” It seems that this week, the implications of that trade started to dawn on investors.

If and when the global economy recovers, two things are likely to happen:

The result has been a rise in interest rate expectations, particularly further out. For the US, the market is now more or less forecasting a hike in the fed funds rate by Marcy 2023, whereas before it was pricing in zero rates as far as the eye could see.: 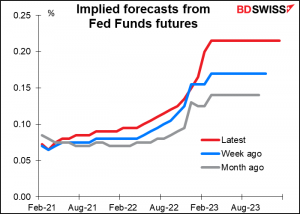 A similar reaction took place in all the money markets (except Japan, where rates are apparently on hold indefinitely). 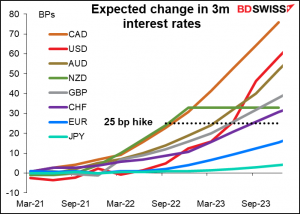 This was all very well and good until people started to realize that this eventually means the end of free money. That’s put a damper on risk-taking sentiment. As a result, stock markets are starting to come off and so-called “risky assets,” i.e. those that depend on a more expansive monetary policy, suffered as a result.

Does that mean the recovery has been cancelled? Not at all. Looking at the performance of commodities yesterday, the industrial metals, the benchmark for the reflation trade, still did well. It just means that a bit of the speculative steam has gone out of financial markets. But with Bitcoin still over $50k, certainly not all of it! 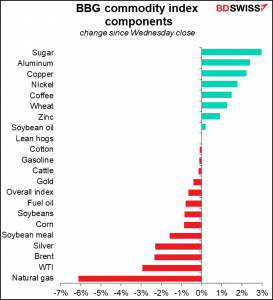 There’s not that much excitement on the schedule for next week.

The Reserve Bank of New Zealand (RBNZ) meets Wednesday after a three-month hiatus. At their last meeting on Nov. 11th, they upped their aid to the economy by establishing a “Funding for Lending Programme (FLP)” that would start operations in early December.

In the minutes to the meeting, they said that “The Committee reaffirmed that an FLP, a lower or negative OCR (official cash rate), purchases of foreign assets, and interest rate swaps remain under consideration.” Nonetheless, the market concluded the exact opposite: that negative rates were unlikely as the RBNZ was less pessimistic about growth and inflation and saw the unemployment rate peaking at a lower-than-expected level. Recently the market has been assuming that the OCR would be at the current level at least until November, which is as far out as the overnight index swaps go. 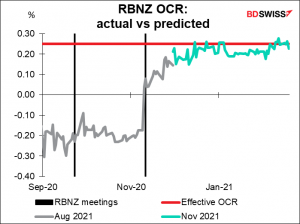 Since the last meeting, the unemployment rate has dropped further – to 4.9% from 5.3% — and the inflation rate has held steady at 1.4%.

The question is, are negative interest rates and – heaven forbid – purchases of foreign assets still on the cards? At the very least, we could have some tinkering with the final paragraph. Last time it read,

The Committee agreed that monetary policy will need to remain stimulatory for a long time to meet the consumer price inflation and employment remit, and that it must remain prepared to provide additional support if necessary.

We might see more specific wording than just “for a long time” that would give the market some idea of how long the RBNZ intends to keep rates at the current level. In March last year they committed to keeping the OCR at the current level for 12 months at least – they could extend or quantify that commitment. (The Reserve Bank of Australia for example says it does not expect to meet the conditions for normalizing rates “until 2024 at the earliest.”) If it’s feeling more optimistic, it could change the phrase “to provide additional support if necessary” to something more symmetrical, such as “to adjust policy if necessary,” thereby opening up the possibility that it could reduce its bond purchases or other extraordinary measures as well as increasing them. Such changes would probably lift rate expectations and be positive for NZD.

Fed Chair Powell testifies to Congress — the Senate Banking Committee Tuesday and the House Financial Services Committee on Wednesday – in his regular semi-annual testimony to Congress. That’s always interesting, although to be honest he speaks so much nowadays that I can hardly imagine we’ll get anything new out of him. What we didn’t hear at his one-hour press conference on Jan. 27th we probably heard at his speech on the labor market last week. Still, he’ll be grilled for hours and who knows what he might say? You can listen to it live here if you’re interested.

As for the statistics, for the US the main ones will be durable goods orders on Thursday and personal income and spending on Friday, which also brings the personal consumption expenditure (PCE) deflators.

Durable goods are expected to rise a respectable 1.3% mom, the nineth consecutive month of increase. This would be a good sign for industry recovery that might be positive for the dollar. 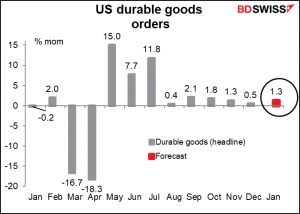 US personal income is expected to soar 10.0% mom – I had to check to make sure that’s the right number – presumably because of the pandemic payments that hit people’s bank accounts during the month (not mine yet, unfortunately). That would be a bit below the record 12.4% mom increase last April under similar circumstances, but with unemployment much less now (6.3% vs 14.8% back then), total income is likely to be much higher – a record, in fact. This could fuel the fears of post-pandemic inflation that have been increasing recently as investors worry what everyone will do with all this money that’s been piling up for months when suddenly people can start going to Starbucks again. 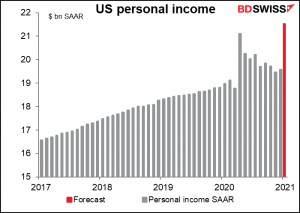 Personal spending on the other hand is expected to be up only 0.7% mom. It’s still lower than it was before the pandemic. 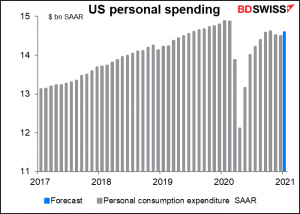 The personal consumption expenditure (PCE) deflators that come out along with the income & spending data are the Fed’s preferred inflation gauges, so in theory they should be key indicators, but no one thinks the Fed is going to react to higher inflation for a long time. Core inflation, the Fed’s preferred inflation gauges, is expected to tic down slightly, which could help to reverse some of the uptrend in inflation expectations recently and help the bond market to recover. (No forecast available yet for the headline figure.) 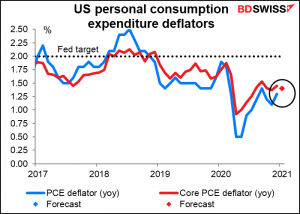 The US will also release the second estimate of Q4 GDP on Thursday.

Meanwhile, US markets will still be watching the passage of the fiscal stimulus bills through Congress while gazing nervously at weather.com to see the latest storm news. More snow is expected to sweep across the South and East, bringing havoc and higher oil prices in its wake. That’s terrible for a lot of people but it could be good for CAD.

Britain releases its employment data on Tuesday. The unemployment rate is expected to rise a bit. In theory that could be negative for the currency, but the pound has been preternaturally strong recently as the market concentrates not on the economics but rather on the country’s surprisingly successful vaccine rollout. I’d expect only a temporary dip unless it’s a disaster. 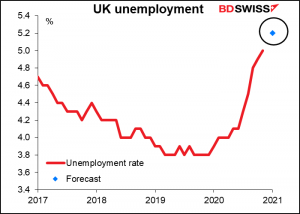 Also, Bank of England Gov. Bailey appears before the Treasury Committee on Wednesday.

Japan sees many of the usual end-month indicators during the coming week, except for the employment numbers, which will be released the following week. Friday they release Tokyo CPI, industrial production, and retail sales.

Consumer prices in Japan are expected to remain in deflation. No change there. 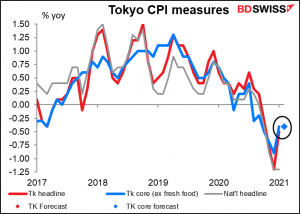 Industrial production is expected to be up a relatively healthy 3.9% mom. Even so, that would leave Japan’s IP still 2.2% below pre-pandemic levels. 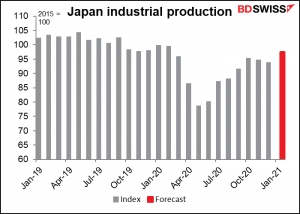 That would put it exactly in line with US performance, so maybe that’s par for the course at this troubled time. 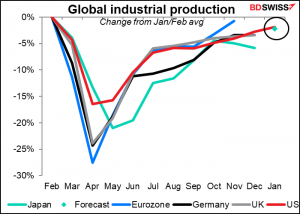 As for Europe, the Ifo indices will come out on Monday, and ECB President Lagarde will also make a speech that day. Bank of Canada Gov. Macklem will make a speech on Tuesday.

By the way, last week I mentioned something about spending and expressed surprise that retail sales were up so much during this lockdown period, because I’ve barely gone out of my house and therefore haven’t spent much money during this time. After reading more on this topic, I gather my consumption patterns are not at all typical nowadays. For example, I’m still wearing dress shoes that I bought back in 2002 when I got a new job (admittedly I haven’t worn them much in the last year, but…) I still wear a sweater that my father bought in England during WWII as well as some of my grandfather’s ties from around that time (they’re very stylish! He had good taste.). By comparison, Americans buy one piece of clothing every five days, on average, according to a recent article in The Atlantic. My guess is that their children won’t be wearing those clothes 75 years from now. 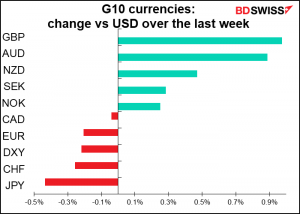