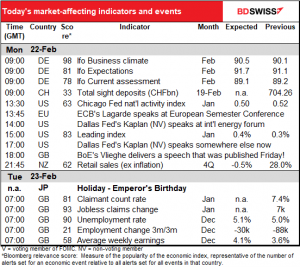 Stock markets were relatively indecisive on Friday but not the FX market – FX became noticeably more confident about the recovery as virus cases continued to decline in the West and developed market yield curves continued to bear steepen (long-end yields rising faster than short-end yields, which are being constrained by central banks on hold.) The commodity currencies all gained vs the safe-havens, with CHF for once at the bottom of the league. This is often the pattern when interest rate expectations are rising and real yields rising as well. 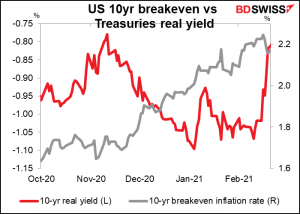 Another sign that investors expect the recovery to continue: the prices of industrial materials, such as copper and timber, are rising rapidly. (This may be helped by anticipation of substantial rebuilding in Texas.) 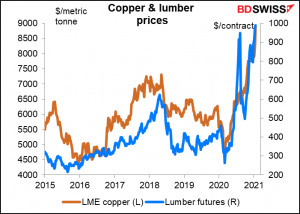 Prices of industrial materials are rising much more rapidly than that of safe-havens such as gold. This is the normal state of affairs when people expect the economy to recover. 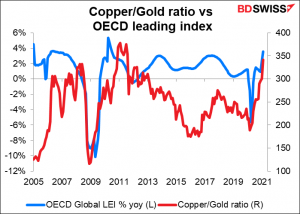 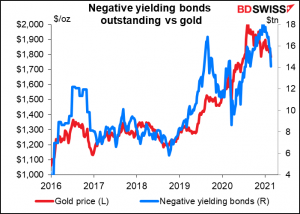 One indication of the strength of the commodity currency rally: despite the extension of a Toronto lockdown until March 8th, USD/CAD retested the 1.26 level, which had proved to be solid support back in January.

GBP/USD finally broke through the 1.40 level, much to my amazement. This came despite a big downward surprise in UK retail sales for January (-8.2% mom vs -3.0% expected). The currency had little reaction to that disappointment however as it was tracking the rise in 10yr UK yields. Yields moved even higher in the afternoon, which finally pushed the pair through that nice round number. 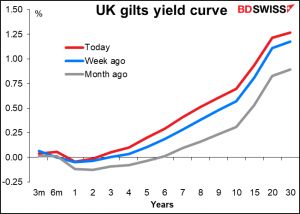 Commitments of Traders Report: no change in overall USD position

Speculators kept their overall USD position more or less unchanged for the second consecutive week. Other changes were relatively minor: they increased their JPY and NZD long positions, as well as GBP while decreasing their CHF and CAD long positions. They went further short AUD, although it’s still quite a small position – neutral might be a better way to describe it.

Hedge funds mirrored these changes, although their levels are somewhat different – they’re substantially long AUD and MXN rather than neutral. Asset managers bought GBP and NZD. 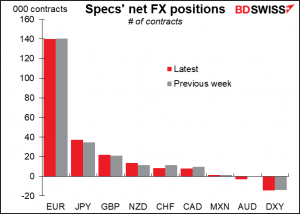 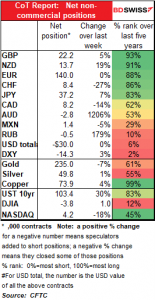 Implied volatility rose for all currency pairs over the last week, particularly NZD/USD and GBP/JPY, and AUD/NZD. USD/NOK is as usual expected to be the most volatile currency pair, followed by NZD/USD and AUD/USD. 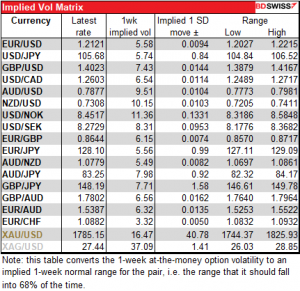 Sometime today, UK PM Boorish Johnson will set out his roadmap for exiting lockdown. Lifting the lockdown should allow the economy to gradually warm up from its current “deep freeze,” allowing the “green shoots” of growth to emerge with the spring. (I’m sure there must be an appropriate song from “Frozen” that I could link to, but I don’t know the movie well enough.) According to press reports, Johnson will confirm plans for a return to school on March 8 and will set out the “earliest date” by which certain sectors and activities can resume. The hope is to have much of the economy reopened by the summer. The timetable should give an idea of the likely pace of recovery in the UK.

The UK’s lockdown is currently much stricter than that of the EU, US or Japan, which is depressing UK growth relative to those other countries. However it doesn’t seem to be hurting the pound any as the market discounts what’s likely to happen in the future, not what’s happening now. 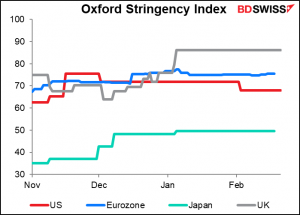 Still, the market expects the UK to be the slowest of the four major currency blocs to recover to pre-pandemic levels of output. 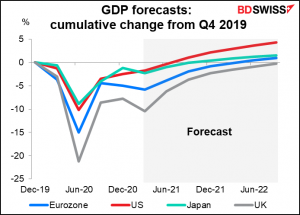 The day starts out with the Ifo survey, the most important leading indicator for the German economy. The current assessment index is expected to fall a tiny bit (one tic) but the expectations index is forecast to rise a lot more, leading to a rise in the overall “business climate” index. That could be good for the euro overall. 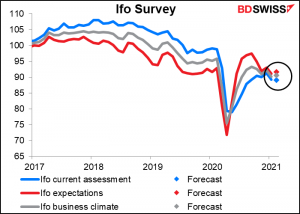 Swiss sight deposits have fallen slightly for the last two weeks as EUR/CHF moves higher, reducing the need for the Swiss National Bank to intervene. 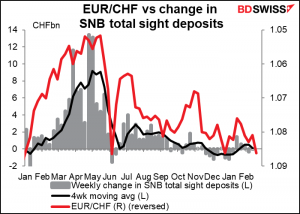 European Central Bank (ECB) President Lagarde will give the keynote speech at the European Semester Conference. This is a conference for members of EU parliaments to get together and discuss budgets etc. It’s part of European Parliamentary Week, which according to their website “brings together Parliamentarians from the European Union, candidate and observer countries to discuss economic, budgetary, environmental and social matters.” I assume Lagarde will say something along the lines of “keep up the good work spending as much money as possible,” because the ECB has always sought as much fiscal support as they could get.

Note that Dallas Fed President Kaplan will be speaking not once, not twice, but three times today – I didn’t even put the third one on the schedule. This is what’s happened ever since these presentations went virtual – it’s a lot easier for them to do them so they’re doing a lot more.

The US leading index is expected to rise by one tick. That’s better than falling by one tick, but I don’t think it’s enough to make anyone change their mind about the US economy. I’d expect it to be neutral for the dollar. 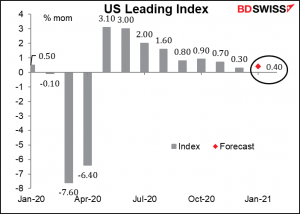 Tuesday is a holiday in Japan – the Emperor’s Birthday! Happy Birthday Emperor Naruhito! FYI he’s the Last Emperor: there’s no other ruler with the title Emperor left in the world (even though Japan doesn’t have an empire anymore).

After you’re through celebrating his birthday, make sure you can still get up early enough to trade the UK employment data.

The jobless claims and claimant count rate have no forecasts but still a high Bloomberg relevance score. The higher relevance number may be a holdover from the old days, when they were the focus of attention. The UK Office for National Statistics (ONS) stopped including them in its statistical bulletin from March 2017, because, it said, the series “may now be providing a misleading representation of the U.K. labor market.” (The ONS still publishes the data elsewhere, which is why we still get it every month.)

The unemployment rate is expected to rise slightly as the number of people working falls slightly. Makes sense. Although the economy is in bad shape, the number of people on payrolls rose in December, so it looks like there may have been a slight improvement in the job market. Moreover the furlough system is picking up a lot of slack of people who otherwise might have lost their jobs. 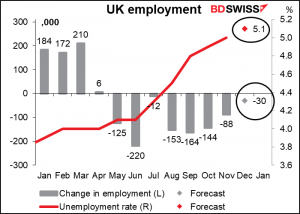 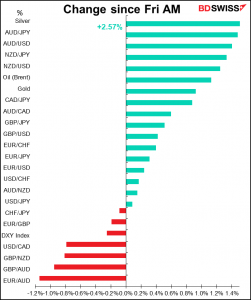