You are at:Home»MARKET PREVIEW»GBP Up on Vaccine Optimism, USD Down on Bond Spread Narrowing; Preliminary PMIs, G7 Meeting 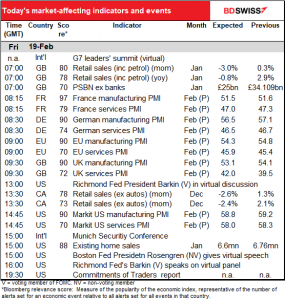 Not the usual pattern – on a general “risk-off” day, after stocks were down unanimously in Europe and the US and are mostly down in Asia this morning, USD and CHF are the biggest losers and NZD and EUR are up. USD/CAD barely budged despite lower oil prices.

USD was generally weaker, losing some of the gains that it had made on Wednesday. This was despite the fall in equity markets, which in the not-too-distant past would’ve triggered a safe-haven flow into USD. However US bond spreads narrowed as global bond yields resumed climbing and European bond yields rose more than US yields. The move was caused by higher real yields rather than higher inflation expectations as 10-year breakeven inflation rates actually fell on the day, both in the US and Europe.

GBP was once again the outperformer in G10, much to my embarrassment and chagrin. I had assumed the disastrous start to Brexit and the emerging vision of Brexit as not just a one-off event but rather as a never-ending series of negotiations and discoveries of baleful unintended and unforeseen consequences would eventually bring the pound down to parity with AUD if not NOK. On the contrary, cable breached Tuesday’s high of 1.3952 and moved up to 1.3986 – people just don’t have the courage to push it past the gleaming 1.40 line is my guess. But once that round number breaks, then the 2017 high of 1.4439 becomes the next target.

Optimism about the UK’s reopening plans is offsetting the dismal news about Brexit, as a study by Imperial College suggested that there has been a “strong decline” in COVID infections in England (two-thirds, in fact) since the lockdown began in January. The welcome news comes just as the government is reviewing its plan for easing the lockdown, which it will announce sometime next week.

The fact that the pound is benefitting from the successful vaccine rollout may spell trouble for the dollar, because the US vaccine rollout, never very well managed under the Trump regime, is now being disrupted by the nationwide cold snap. 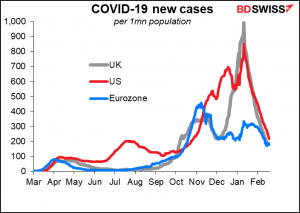 Oil prices fell as Texas shale oil production has started to slowly come back online. Oil was also hit by news that the White House is willing “to discuss a diplomatic way forward on Iran’s nuclear program.” A rapprochement between the US and Iran that led to the US re-joining the Joint Comprehensive Plan of Action (JCPOA), the deal regulating Iran’s nuclear program, could eventually lead to Iran exporting more crude oil. Iran’s production is down about 1.7mn barrels a day from the time when Trump pulled out of the JCPOA. 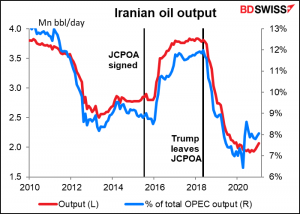 There’s a G7 summit today, US President Biden’s first. Although the UK will be hosting it in theory, It will be held virtually. One topic of discussion will be the distribution of vaccines to developing countries. Apparently 10 countries have administered 75% of all COVID-19 vaccine doses while more than 130 countries haven’t received a single dose yet. UK PM Booish Johnson, who will chair the meeting, is expected to pledge that his country will donate surplus doses to poorer countries. Meanwhile, French President Macron and President Biden will also present their ideas on the subject.

As for economics, a White House spokesman said Biden plans to further “discuss the global economic recovery, including the importance of all industrial countries maintaining economic support for the recovery” after the pandemic subsides. The leaders will also discuss China. President Biden is busy undoing as many of Trump’s disastrous policies as he can, but one area that he hopes to improve on is the tariffs on China. Biden will stress the need for “updating global roles to tackle economic challenges such as those posed by China.”

Biden and many of the other leaders will also take part in an abbreviated, virtual version of the annual Munich Security Conference, the world’s leading forum for foreign and security policy. They will be discussing “how to rebuild and renew the transatlantic alliance and highlight the areas in which transatlantic and international cooperation are most urgently needed,” according to the group’s website. (Translation: how to repair the damage Trump inflicted on the Western alliance.) You can watch the meeting on their website.

The question of what to do about the Iran nuclear deal could come up at either or both of those meetings, which could affect oil prices and CAD.

As for the indicators, the big thing today is the preliminary purchasing managers’ indices (PMIs) for the major industrial countries.

Japan is already out. Its manufacturing index rose enough to put it over the 50 “boom or bust” line signifying expansion. Services however fell modestly, falling even further into contraction.

For the rest, the market is expecting some contraction in manufacturing. If Japan is any guide then there could be positive surprises. Expectations for the more troubled service sector are mixed: the Eurozone and the UK are expected to improve somewhat but remain well below 50, while the US, which is already in expansionary territory, is expected to slow somewhat but remain quite healthy. 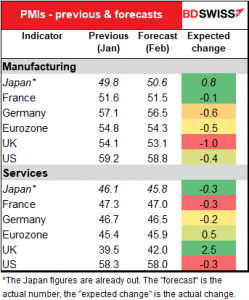 Canada’s retail sales are forecast to fall after seven consecutive months of increases. This would still leave them 4.7% above the pre-pandemic level however. 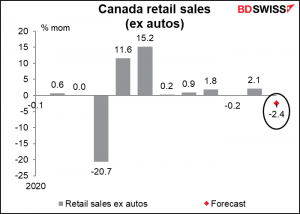 Canada’s retail sales have recovered better than those of some other countries. 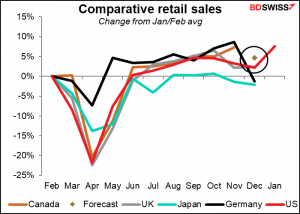 US existing home sales are expected to be down 2.4% mom, whereas next week’s new home sales are forecast to be up 2.0%. Both series recently hit post-Global Financial Crisis peaks so it’s no surprise if they move sideways for a bit. 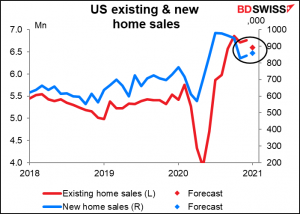 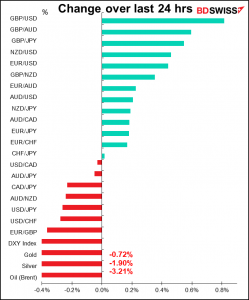