You are at:Home»MARKET PREVIEW»JPY, USD Up on safe-haven bid, EUR, GBP Down on recession Fears; service-sector ISM, FOMC Minutes 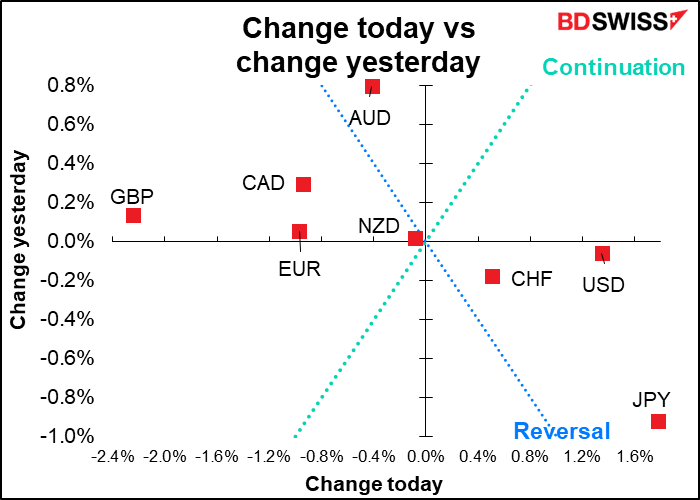 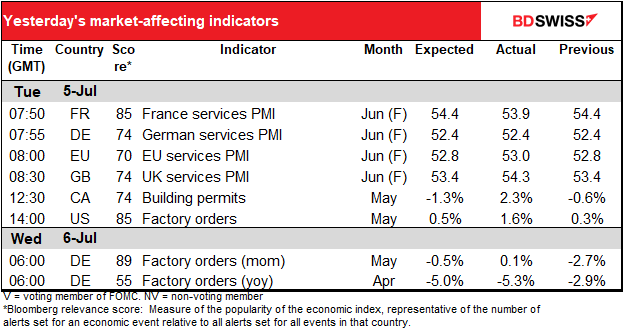 Once again the motivating factor was fear of recession. Two-year bond yields fell across the board as market participants expect that a recession in the near future will limit central banks’ room to tighten rates. (Two-year yields reflect that change in view because a two-year yield can be thought of as an overnight rate rolled over 730 times and so is sensitive to changes in the expected overnight rate.)

JPY would be the main beneficiary of a reassessment of tightening fears. One of the main reasons why JPY has plunged this year is because of the widening interest rate gap between Japan and other countries, which makes it more attractive for Japanese investors to put their money abroad and for foreign investors to borrow in yen to fund other investments (the fabled yen carry trade). If that interest rate gap narrows, the opportunity cost of holding yen or the benefit from funding in yen diminishes and the currency should recover to some degree. 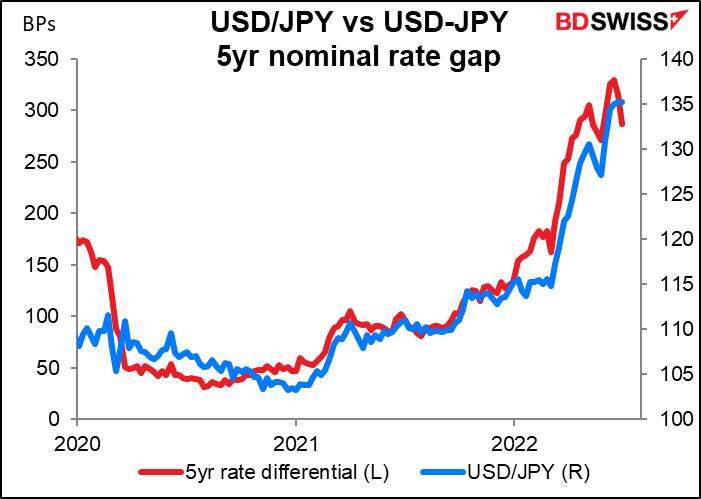 The change in sentiment was quite abrupt, as when I wrote my morning comment yesterday things were looking pretty good. The trigger was the Chapter 11 bankruptcy filing by SAS AB, the Scandinavian airline company. It filed for bankruptcy protection in the US as wage talks collapsed and pilots went on strike. The chairman of SAS made the announcement in a webcast around 06:50 GMT yesterday. You can see the immediate reaction in EUR and the quick reaction in JPY. 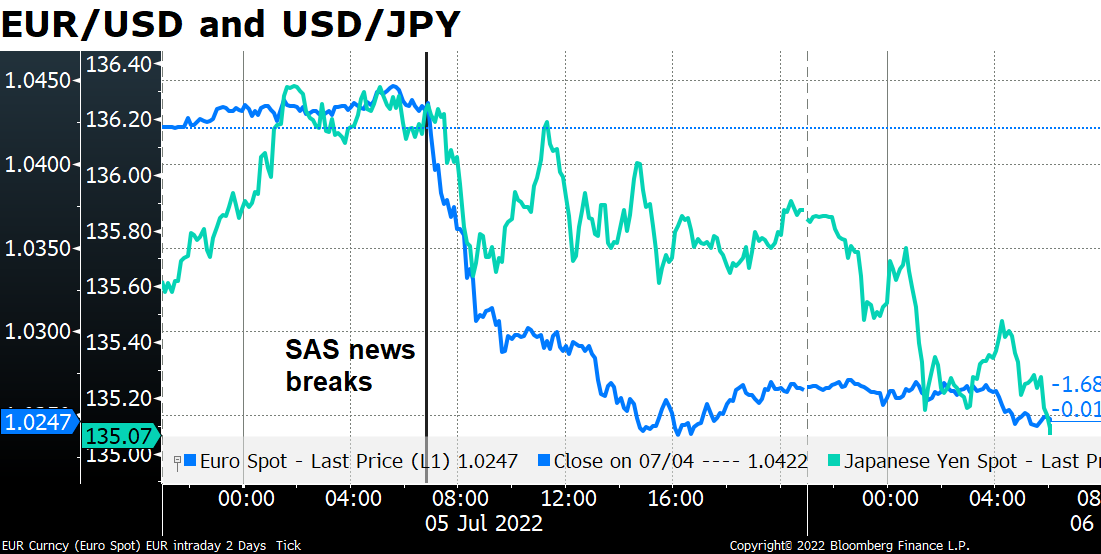 The problems at SAS are indicative of how the change in power between workers and management might affect companies in the future. One problem that the company faced – at least, the one that management blamed for the Chapter 11 filing – was a pilot’s strike. Other companies too are facing demands for higher wages from newly empowered workers. Many airlines – indeed many companies – cut back on their operations during the pandemic and are now having severe problems getting back to normal to cope with more normal demand.

Meanwhile, natural gas prices in the Eurozone continue to soar as Russia cuts back supplies in the Nord Stream pipeline, which is due to shut down temporarily for maintenance anyway. And Norwegian gas workers are threatening to go on strike, which could shut down nearly 60% of that country’s gas production from Saturday. Note in the graph the different trajectory of US natural gas prices vs German prices, which were fairly close before the Russian invasion of Ukraine.

The market is really worried about the long-term effect of this gas shortage. Electricity prices for next year have gone shooting up. 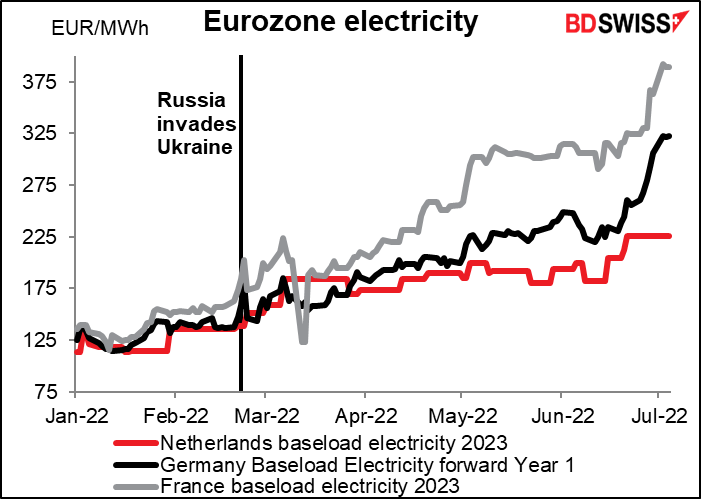 Fears of recession sent most commodity prices plunging, especially energy. Note that “natural gas” in this table is a US price, not a European price. 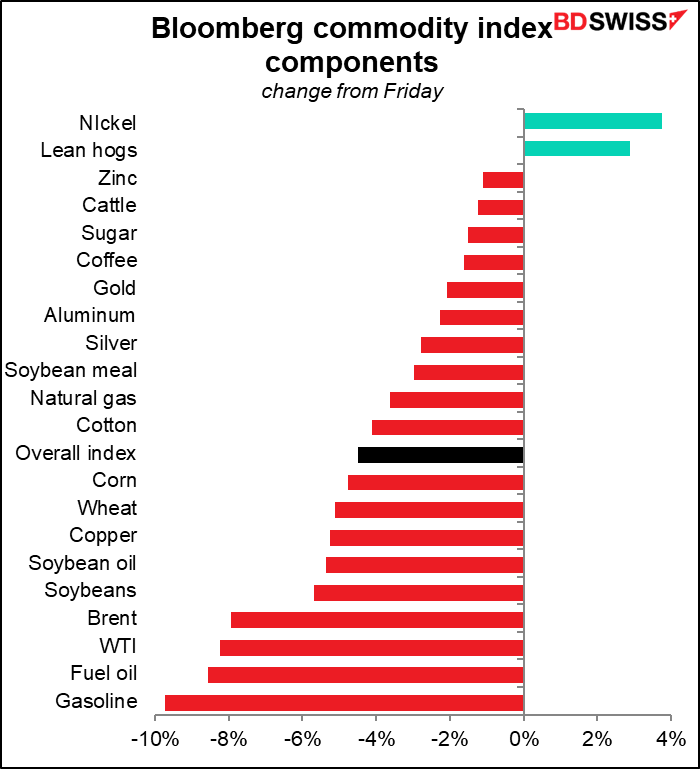 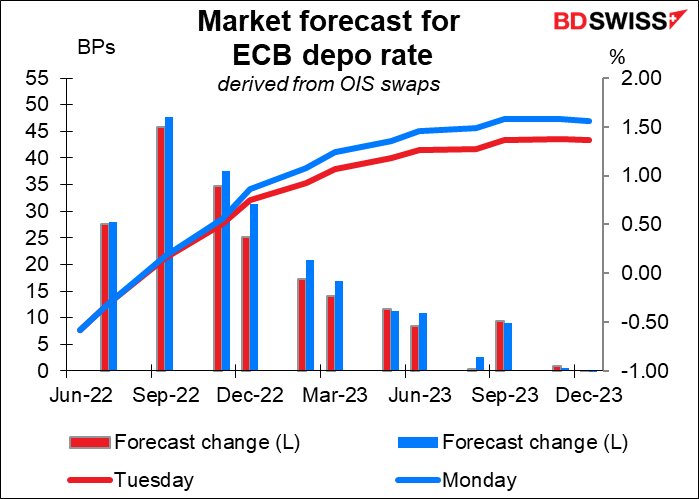 Similarly in the US, the market took out some estimated tightening for this year and increased the amount of loosening they expect for next year. 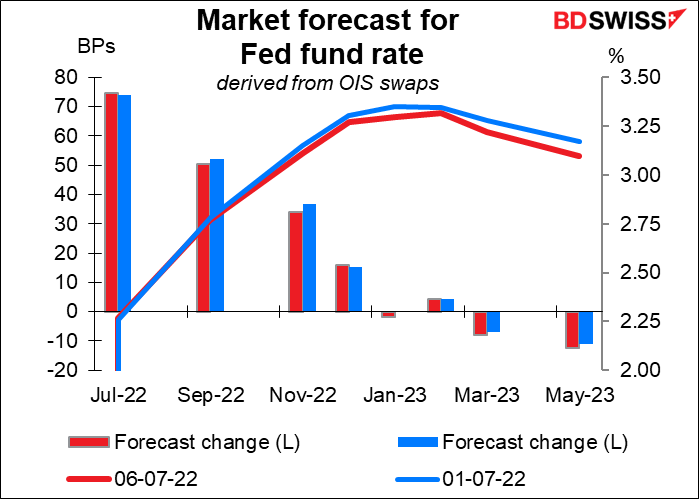 GBP had its own problems as two of the most senior ministers in the Cabinet, Chancellor of the Exchequer Rishi Sunak and Health Secretary Sajid Javid quit Boris Johnson’s cabinet. The resignations came minutes after the PM apologized for appointing MP Chris Pincher to a government role. Pincher was suspended as a Tory MP last week over allegations of sexual misconduct.

Johnson hasn’t indicated any intention to resign and has appointed replacements (Education Secretary Nadhim Zahawi has been named as the new Chancellor while Downing Street chief of staff, Steve Barclay, will be the new health secretary) but Johnson’s position looks increasingly tenuous. I’m not sure whether that’s good or bad for GBP – in my view his departure would be long-term beneficial for GBP, but in the short term the uncertainty might hurt the currency. In particular, could the Bank of England hike rates aggressively while the political world is in flux?

If the Cabinet continues as is then Britain will probably move away from Sunak’s relatively tight fiscal policy toward an easier policy, but it’s not possible to price that into the pound given a) the political uncertainty and b) the pound’s sensitivity to overall risk sentiment. 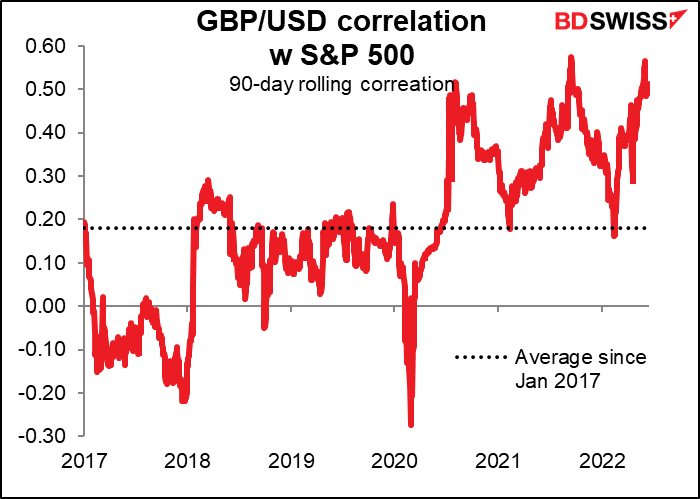 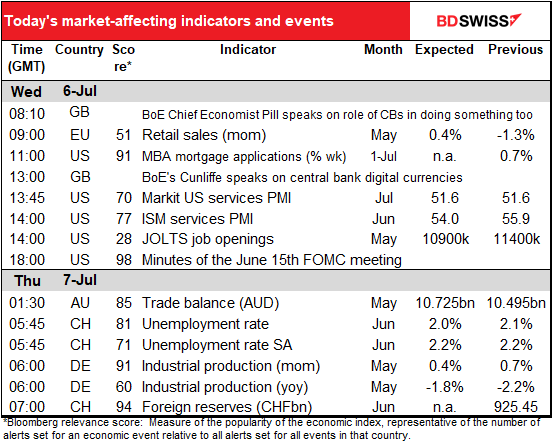 EU retail sales are not a major indicator, first off because they’re a month behind the national figures and secondly because the EU isn’t a consumption-driven economy. But I include them anyway as a familiar barometer of economic health. They’re expected to be neither here nor there – not particularly outstanding but not that bad either. 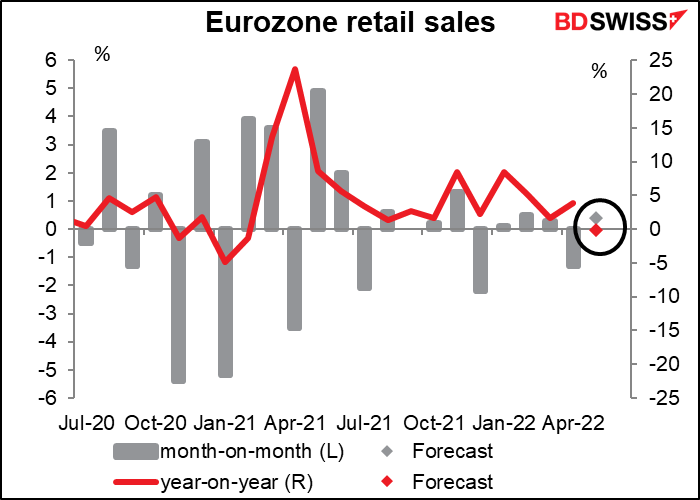 The service-sector purchasing managers’ indices (PMIs) for the US come out today, the final version for the S&P Global index and the one-and-only for the Institute of Supply Management (ISM) version. The ISM index is expected to fall, which should surprise exactly no one as the S&P Global version was down 1.8 points during the month. Nonetheless this may add to the narrative that the US economy is slowing and soon will be in recession. USD- 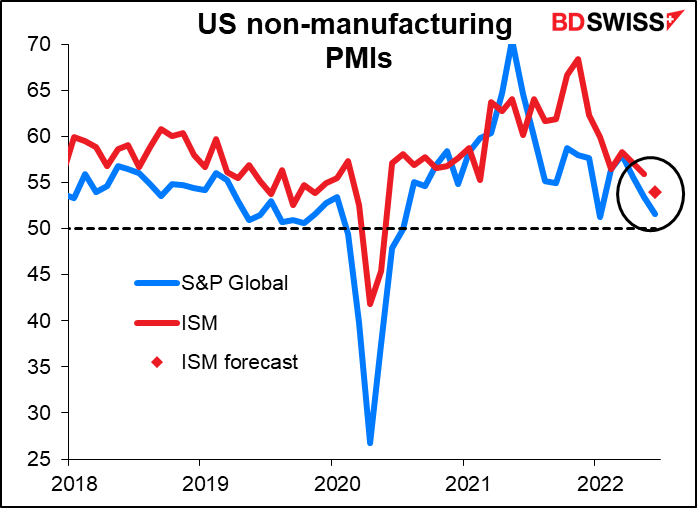 The Job Offers and Labor Turnover Survey (JOLTS) is forecast to show a fall of about 400k jobs over the month, which oddly enough would be quite a similar percentage fall as occurred in the previous month. Maybe that’s how people forecast this indicator – just guess that if it fell 3.8% mom last time, it’ll fall 3.5% this month. Even so, there would be 3.9mn or 55% more openings than before the pandemic. The Fed has framed

There’s no forecast for the quit rate, but that’s closely watched too. People generally only quit their jobs if they have another one lined up. A high quit rate, like what there is now (down just one tick from the record high), is generally a sign of a strong job market. 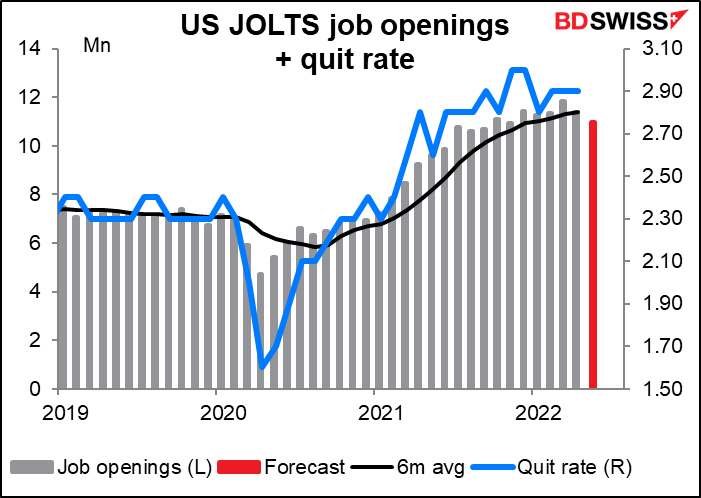 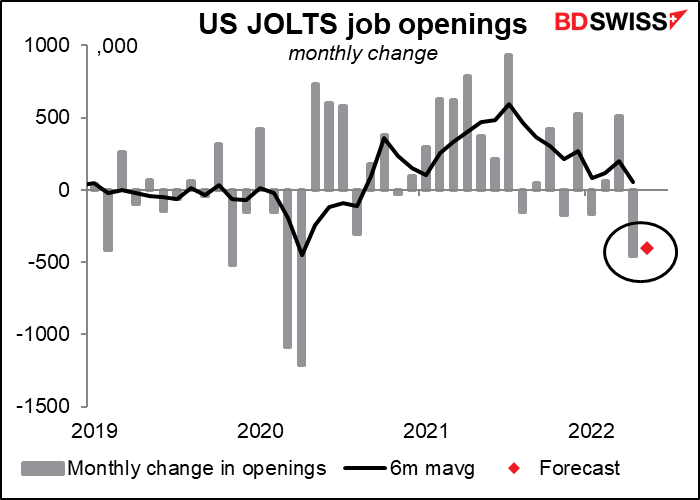 A fall of some 400k jobs would be just a drop in the bucket. It would still leave 1.85 jobs for every unemployed person, not that far off the recent record high of 1.99. Fed officials have said that one objective of their tightening campaign is to bring job openings more in line with labor supply. Therefore as long as this ratio is substantially higher than 1, the Fed can keep hiking rates. USD+ 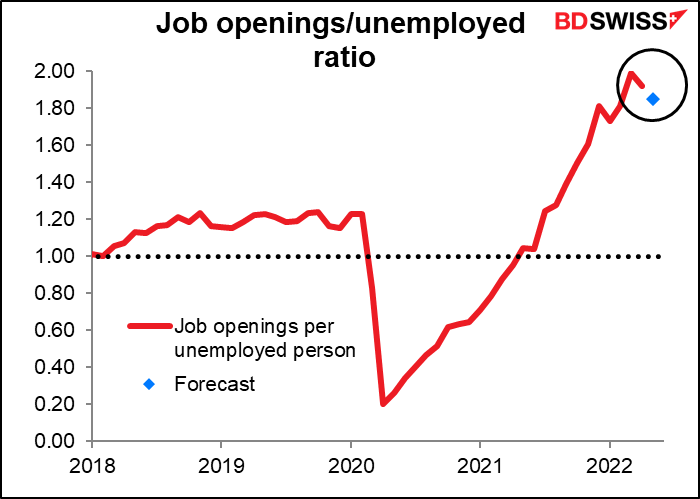 Speaking of the Fed, we also get the minutes of the June 15th meeting of the rate-setting Federal Open Market Committee (FOMC). Ahead of this meeting, Fed Chair Powell had virtually promised a 50 bps hike and yet they decided to go with 75 bps. The market will want to learn more about why they decided that way and what it might mean for the July meeting (which is seen as having a good chance of a 75 bps hike too) and particularly September. Under what conditions would they hike by even more? On the other hand, what would it take for them to revert to the standard 25 bps hikes, or even pause? That question is especially important now that recession fears have overtaken inflation fears. What are they thinking about the trade-off between recession and inflation? Since the meeting, Fed officials have increasingly warned that their fight against inflation is bound to hit growth and employment, eventualities that were reflected in the Summary of Economic Projections. The debate at that meeting will shed some light on these crucial issues. 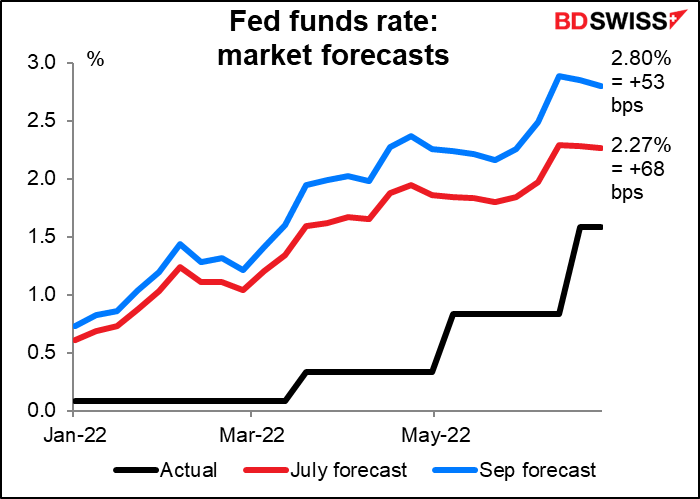 Overnight, Australia announces its May trade data. The data aren’t seasonally adjusted so the 12m moving average is probably the best way of looking at it. That’s expected to be effectively unchanged (AUD 10.575bn vs 10.512bn). 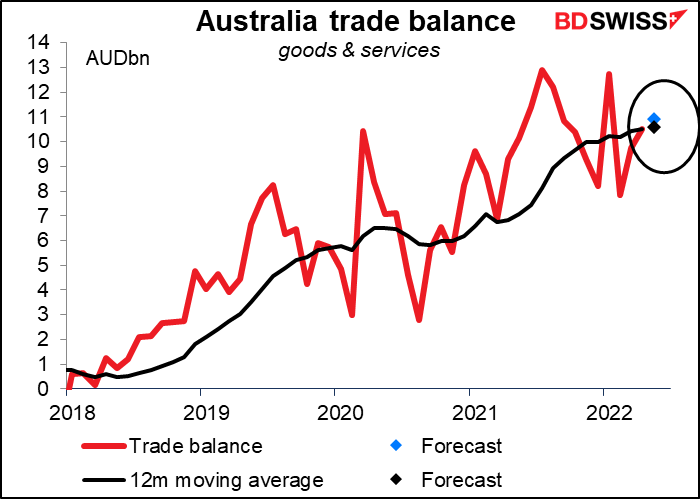 Both exports and imports are expected to be up 2.3% mom, but since exports are larger than imports to begin with, that results in a larger increase in exports than in imports – and a rising trade surplus. 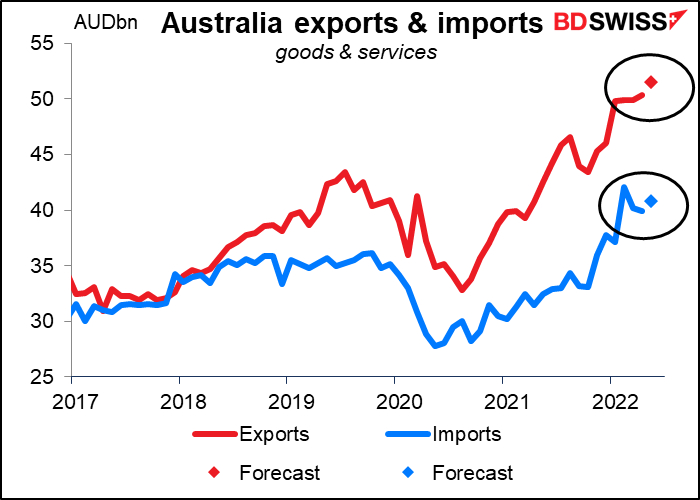 German industrial production is forecast to be up slightly on a month-on-month basis but still falling year-on-year. This follows yesterday’s factory orders, which came in above estimates (+0.1% mom vs -0.5% mom expected). 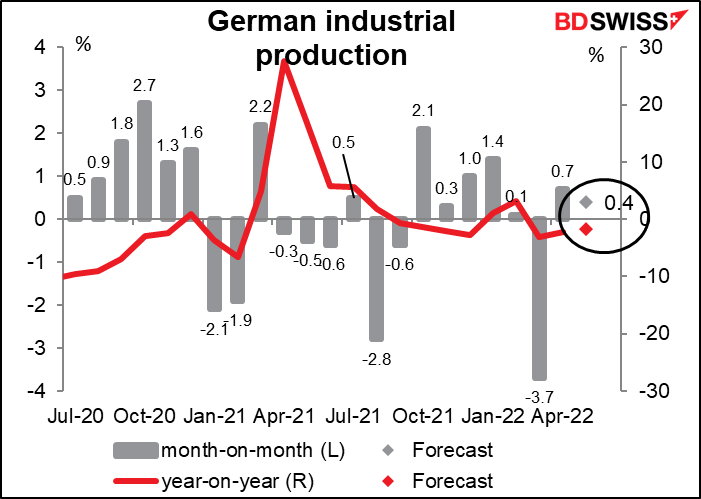 Factories appear to be struggling around the world, but Germany is doing especially badly relative to its peers. It’s below the overall Eurozone level for example and even below the Brexit-challenged UK, although Japan still serves its perennial function of making other countries look good. 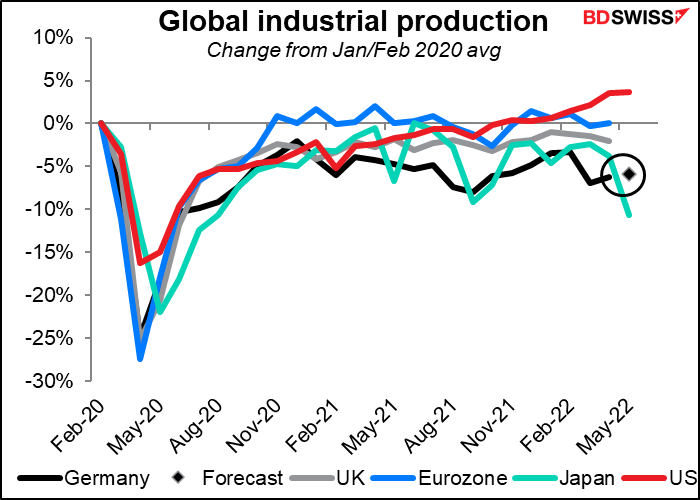 Swiss foreign reserves have a high Bloomberg relevance score but as I remind people every month, they aren’t as good an indication of FX market intervention as the weekly Swiss sight deposits are. That’s because the reserves figures are subject to exchange rate revaluation whereas the weekly data aren’t. So for example if EUR slips vs CHF, as it’s doing recently, the reserves figure will fall even if no reserves were sold. 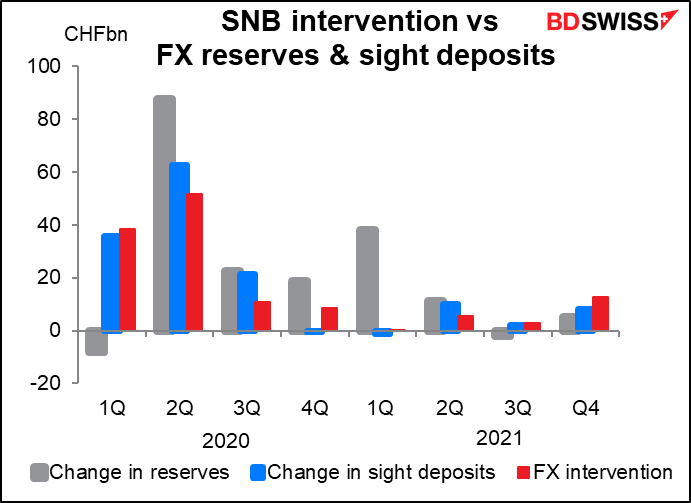 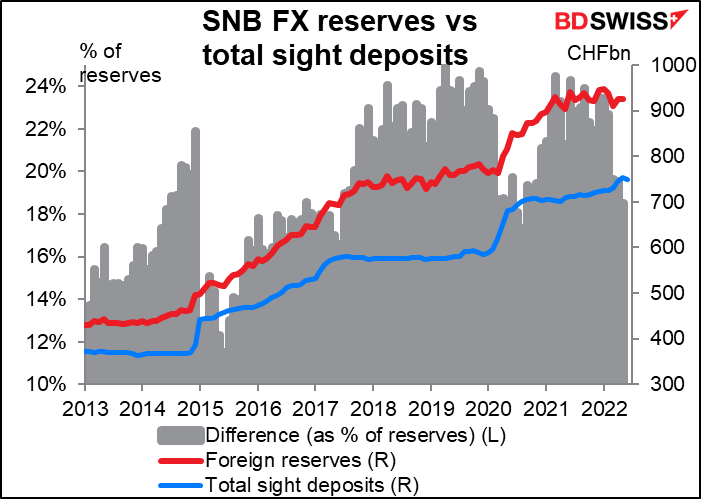 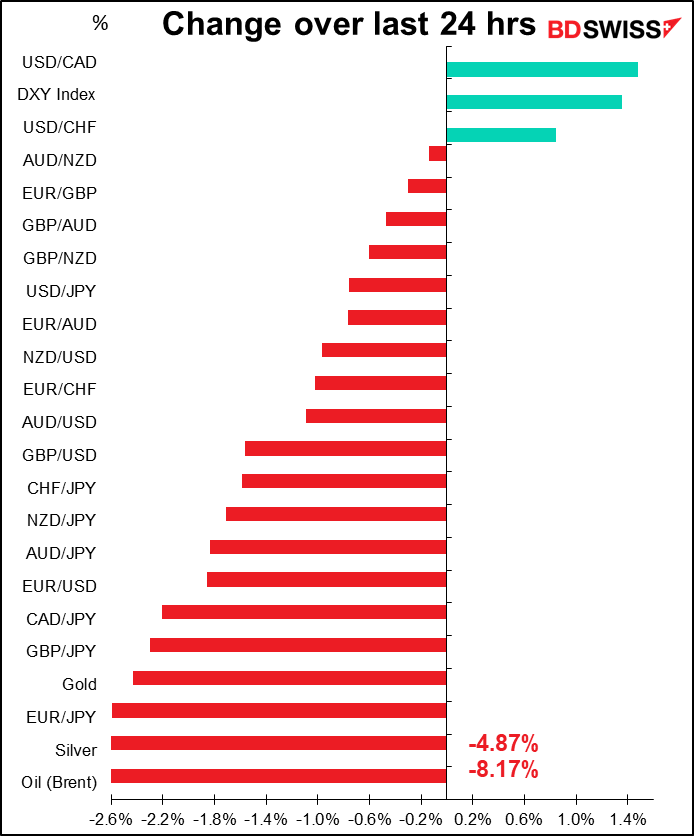 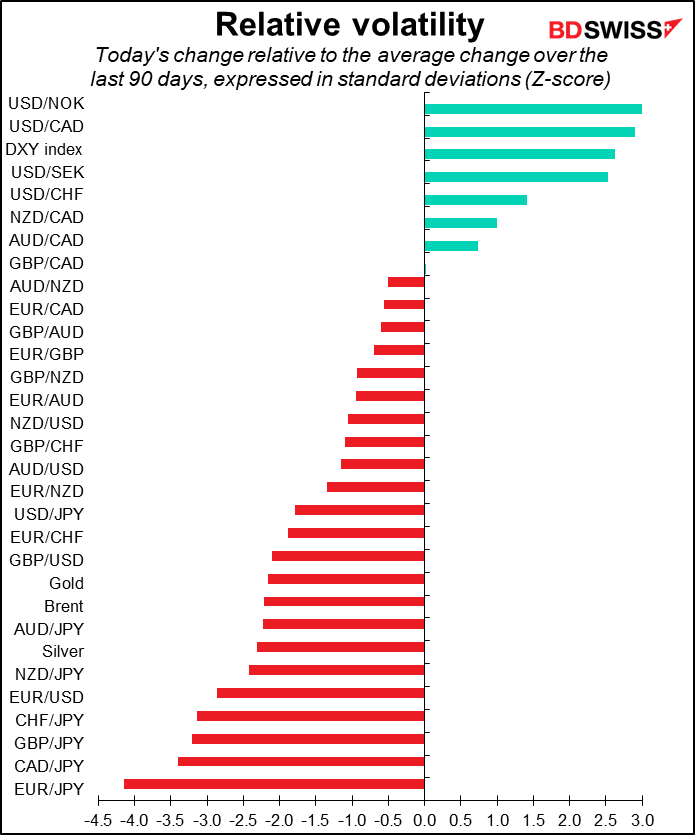