You are at:Home»MARKET PREVIEW»GBP Up on good retail Sales Data, USD Down; US housing starts, Canada CPI 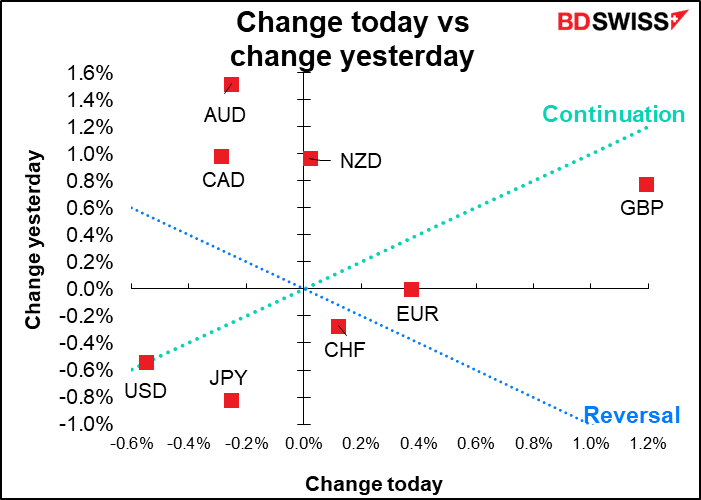 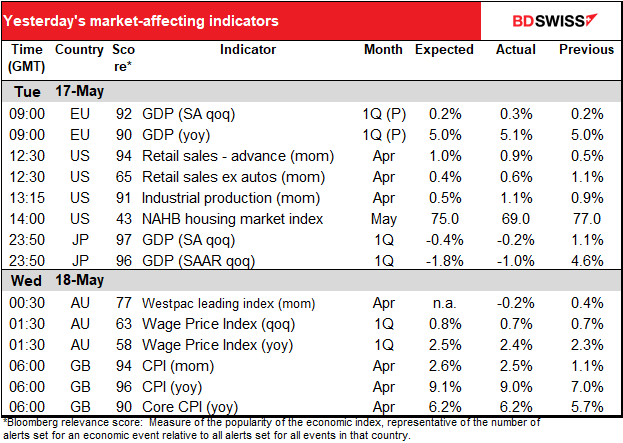 Quite a remarkable day. It just goes to show that, as I said in my Weekly Outlook last Friday, that “The facts aren’t everything. It’s also important to understand how people interpret the facts.”

The news yesterday was quite bullish for the dollar. The stronger-than-expected US retail sales figures show that the US consumer is still spending despite the downturn in sentiment and is willing to run down savings to keep up consumption (see US retail sales figures above, which don’t show the sharp upward revision to the March data). US industrial production also beat expectations. Plus we got some even more hawkish-than-usual comments by Fed Chair Powell, who said the Fed needs to see “inflation coming down in a clear and convincing way, and we’re going to keep pushing until we see that” even if it means taking rates beyond neutral: neutral rates are “not a stopping point.”

The fed funds market has already priced terminal policy rates above the Fed’s estimate of neutral (3.185% in July 2023, vs the Fed’s estimate that neutral is around 2.40%) so this is not a total surprise, but it was a clear and explicit warning to the markets. 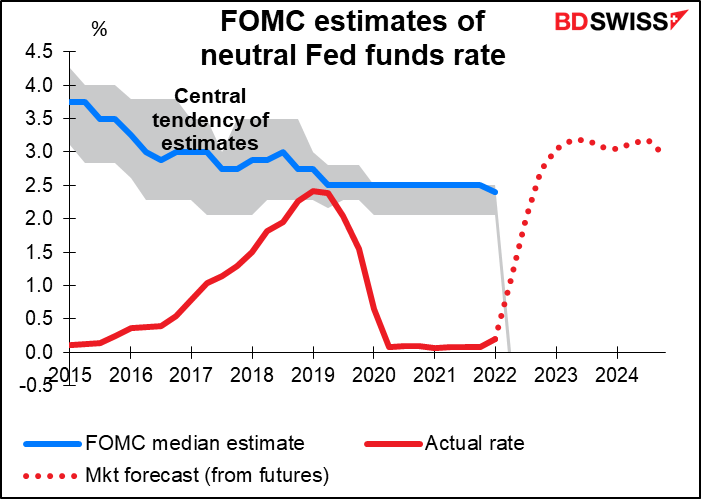 The result was a large re-rating of Fed rate hike expectations. 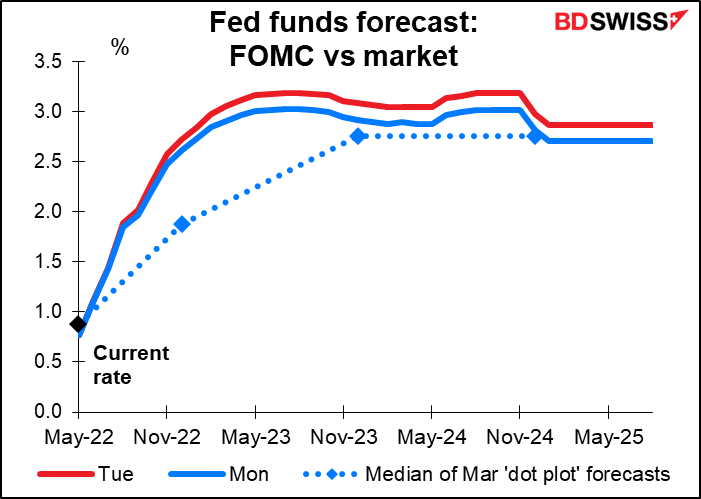 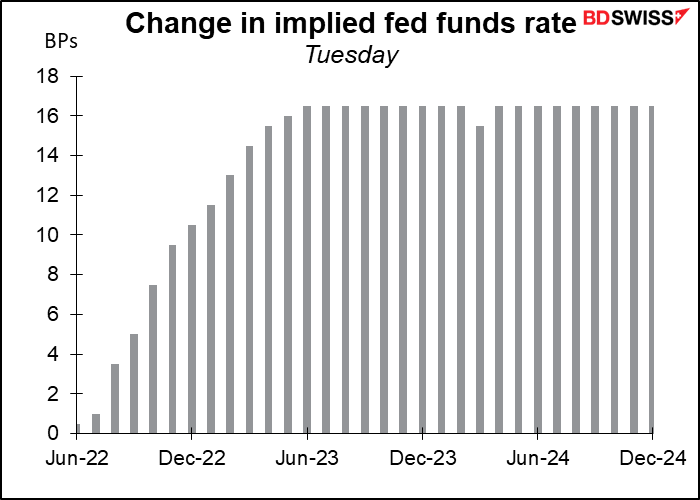 Nonetheless the dollar declined against most currencies. Why? Probably because this isn’t necessarily “new” news, while there was new news on some other currencies.

The thing that really surprised me though and why I started this comment with the quote from my weekly is that despite Powell’s warning and the re-rating of expectations, US stocks rose sharply, with the S&P 500 up 2.0% and the NASDAQ +2.8%. I thought that nowadays we were in a “good news is bad news” paradigm, where news of a strong economy means the Fed will have to tighten even more and the markets take that as bad news. EG the stronger-than-expected US retail sales means that the Fed will have to tighten more if it wants to see the kind of “demand destruction” necessary to get inflation down convincingly. But the stronger risk sentiment – boosted by China, maybe? – caused people to interpret the data as “good news is good news.”

The standout in the FX market was GBP, which rallied on much better-than-expected UK employment data that came out at the opening yesterday. As you may remember, payrolled employees for April rose by 121k, more than double the expected 51k, and the unemployment rate fell to 3.7%, the lowest since 1974. Furthermore, the number of vacancies was larger than the total number of unemployed for the first time.

A tight labor market suggests wage increases, the bane of Bank of England Gov. Bailey’s existence, are going to continue to rise, which means the Bank will have to raise rates by more to ensure that enough people remain in indentured slavery to keep prices down while ensuring sufficient profit margins. That likelihood pushed BoE rate expectations and UK yields up sharply. 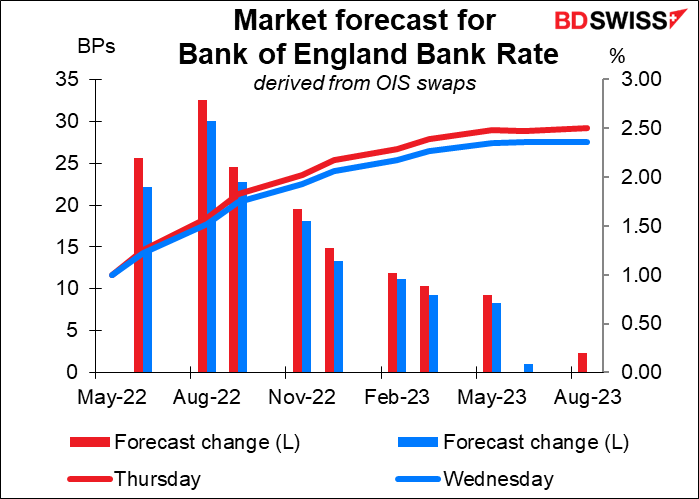 However GBP is coming off a bit this morning after the UK inflation figures missed estimates slightly.

I’m still negative on the pound, as always, especially after UK Foreign Secretary Truss yesterday announced plans to introduce legislation that would override parts of the Northern Ireland Protocol. European Commission VP Šefčovič said in a statement that if the UK moved ahead with the bill, then “the EU will need to respond with all measures at its disposal.” This can’t end happily for the UK or for the pound.

Going back to those yield charts, you’ll notice that German bond yields also rose sharply. This was in response to comments by Dutch Central Bank chief and noted European Central Bank (ECB) hawk, Klaus Knot, who raised the possibility of hiking the ECB’s discount rate by more than 25 bps at a time. “Based on current knowledge, my preference would be to raise our policy rate by a quarter of a percentage point — unless new incoming data in the next few months suggests that inflation is broadening further or accumulating,” he said on Dutch TV. “If that is the case, bigger increases must not be excluded either.” This was the first time a Governing Council member had mentioned such a possibility. ECB President Lagarde has always said rate hikes would be “gradual,” which is interpreted as 25 bps at a time. Just because Knot says so doesn’t mean it’s going to happen, but it’s now at least a subject for debate. You can see the results in the changes in yields above.

The rise in long-term German yields is worth noting, because normally one would think that the possibility of faster-than-expected tightening now would mean lower-than-expected inflation in the long term and therefore lower long-term yields. You often get a flatter yield curve in such a situation. But 10-year yields rose marginally more than 2-year yields did.

After Knot’s comments, the money markets are now pricing in a slight chance of a more-than-25 bps hike in July or August and a bit over 100 bps of rate hikes this year for the first time. As a result, EUR/USD managed to climb back above 1.05, although it’s coming off this morning. 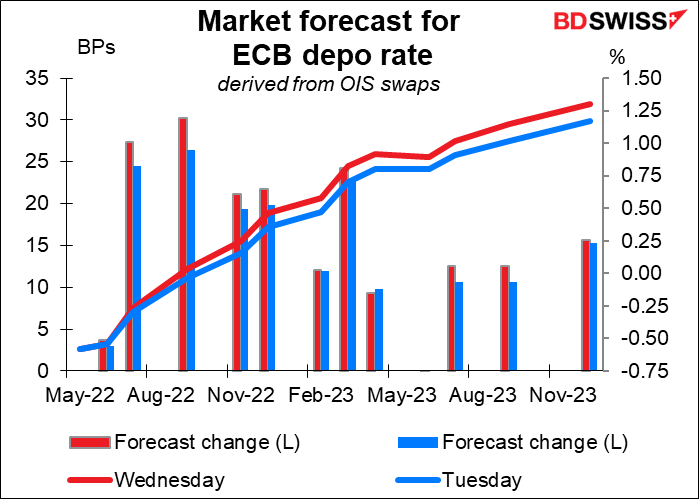 AUD followed risk sentiment closely for most of the day, but then weakened after the 1Q wage data missed estimates.

Other matters: Just FYI the US Congress held a public hearing yesterday with Pentagon officials on UFOs.It was the first in more than 50 years to publicly discuss military sightings. They said they didn’t have any materials from crashes (they would say that, wouldn’t they?) and that they had no proof that these “unexplained aerial phenomena,” or UAPs, are extraterrestrial, but they did show some films that they had no explanations for. Stay tuned. 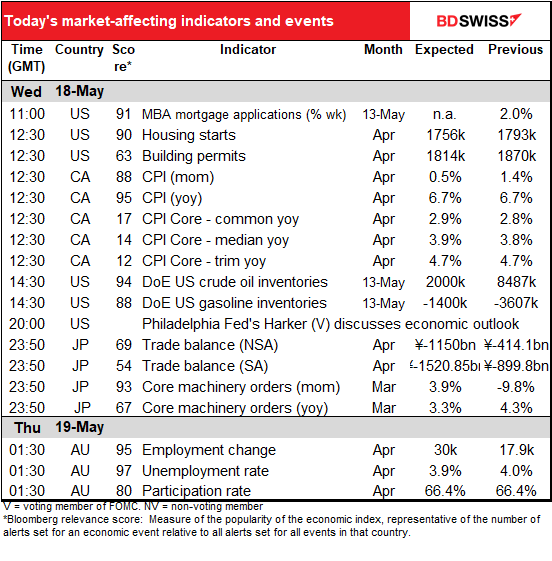 The European morning started out with the UK consumer price index, which was a bit lower than expected (see table at top).

When the US day starts up we get the Mortgage Bankers’ Association (MBA) mortgage applications. These are holding up well despite the rise in mortgage rates, although they are starting to move below last year’s level for this time of year. The housing market may be coming back to earth a bit. 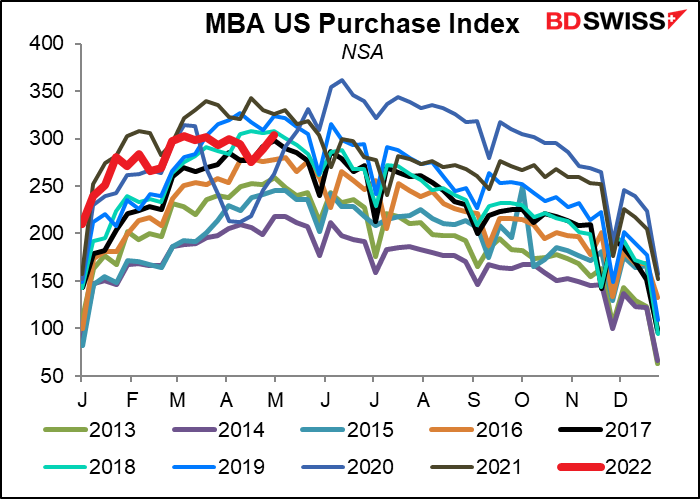 We’ll know more about that 1 ½ hours later when US housing starts and building permits are released. They’re both expected to decline, by 1.8% and 3.1%, respectively. This isn’t bad at all considering the 257 bps rise in mortgage rates since the bottom in February last year (212 bps this year alone). Permits hit a post-Global Financial Crisis high in January so a small decline is normal – this would still be a healthy pace. Nonetheless, there’s a chance that the market may take any decline as a sign of turning. That could be negative for the dollar if it makes people think that the Fed’s tightening is already starting to have an effect on the US economy. 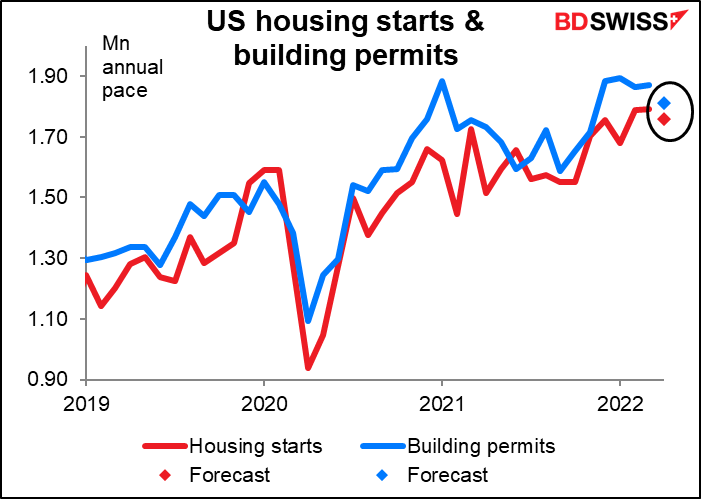 Next up is the focus for the week for those trading the Loonie: the Canadian consumer price index (CPI). The month-on-month rate of growth is expected to slow considerably, leading to a small (10 bps) drop in the year-on-year rate. Will this cause the Bank of Canada to slow its tightening cycle? Not likely. In the statement following its April meeting, the Bank said, “CPI inflation is now expected to average almost 6% in the first half of 2022 and remain well above the control range throughout this year.” It would take a much larger drop in inflation than what the market is expecting to change that evaluation. The figure is therefore likely to set up a hawkish background to the Bank of Canada’s meeting on June 1st. CAD+ 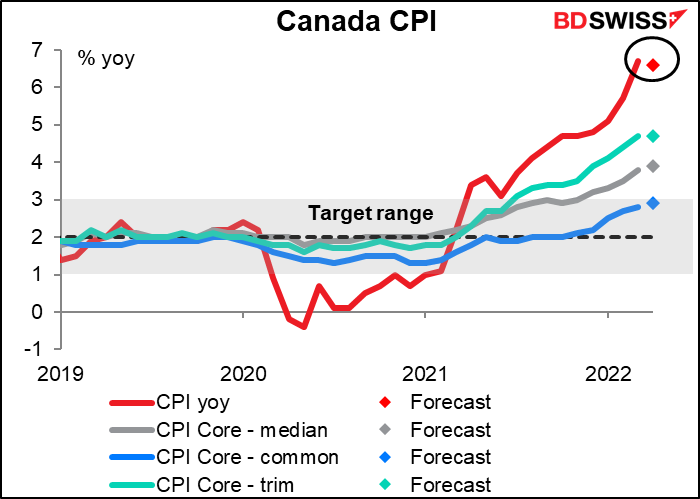 Overnight there are a couple of important Japanese economic indicators. 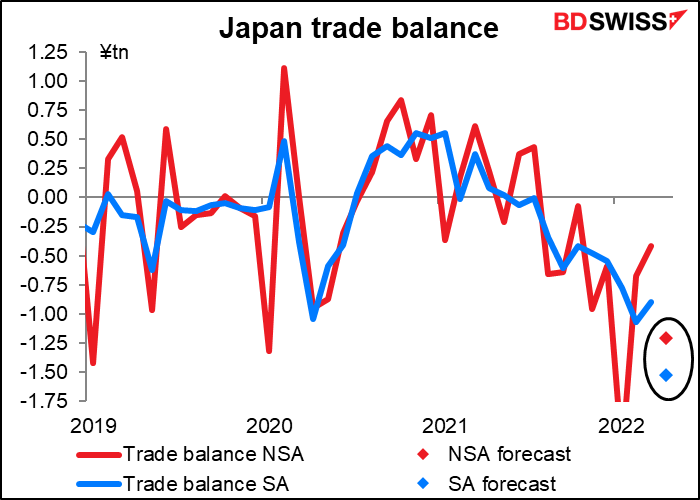 Exports to China are particularly vulnerable because of the lockdown there. On the other hand rising energy prices are pushing up import values while the recovery in the domestic economy is boosting the volume of imports. 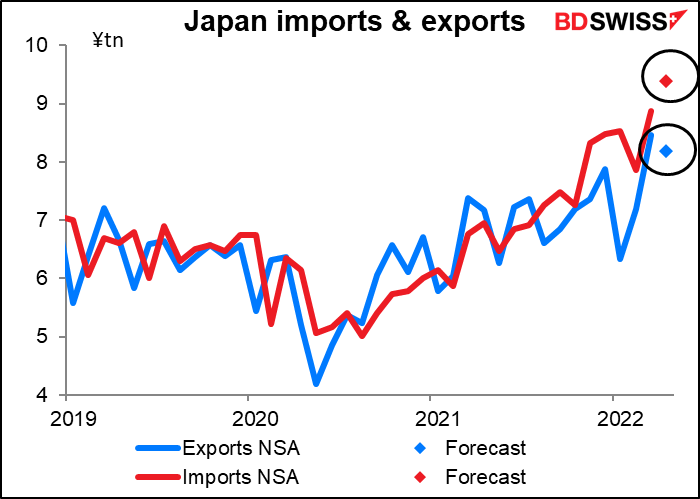 Then we get the Japan machinery orders, which as I say every month are my least favorite indicator because I can never see a trend in the data. Even the six-month moving average is quite volatile. I therefore don’t see what conclusion we can draw from the data. Nonetheless this is one of the more closely watched Japanese indicators. It’s expected to be up on a month-on-month basis after the previous month’s dramatic fall. 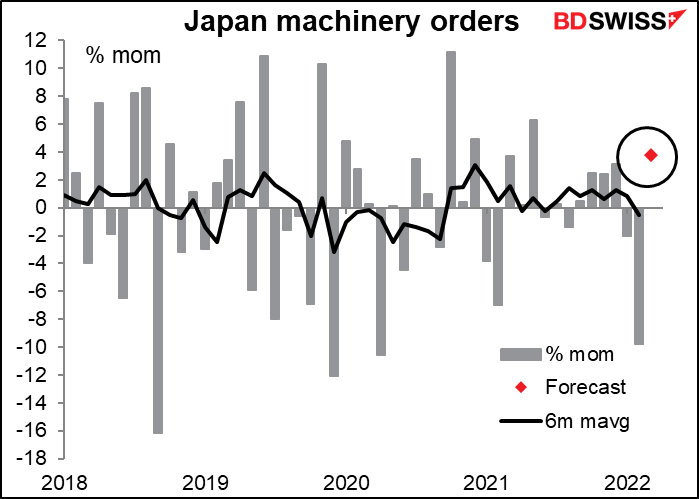 Having said that, the yen does seem to react to the figure, although not in the way one might expect. A negative surprise (orders not rising as much as expected or falling more than expected) is associated with a fall in USD/JPY, i.e. a strengthening of the yen. Go figure. I can only imagine that this is because of risk aversion – that the “safe haven” aspect of the yen kicks in when the figures disappoint and the “risk-seeking” aspect dominates when the data surprises on the upside. 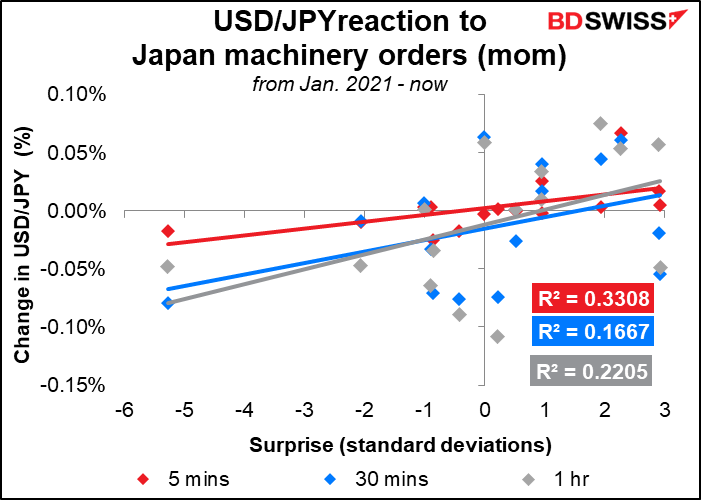 Then comes Australia’s employment data. The Reserve Bank of Australia (RBA) is one of those central banks with a “dual mandate,” that is, it has to aim for both price stability and “the maintenance of full employment in Australia.” This is not a constraint on the RBA nowadays as the forecast 3.9% unemployment rate would be a record low, far below the RBA’s assumed “full employment” unemployment rate of around 4 ¾%. I think a further decline in the unemployment rate would only confirm the RBA’s conclusion that the labor market is tight enough to keep inflation within its 2%-3% target range and that it should continue to normalize policy. It may therefore be positive for AUD, especially if it counters this morning’s slightly disappointing 1Q wage data. 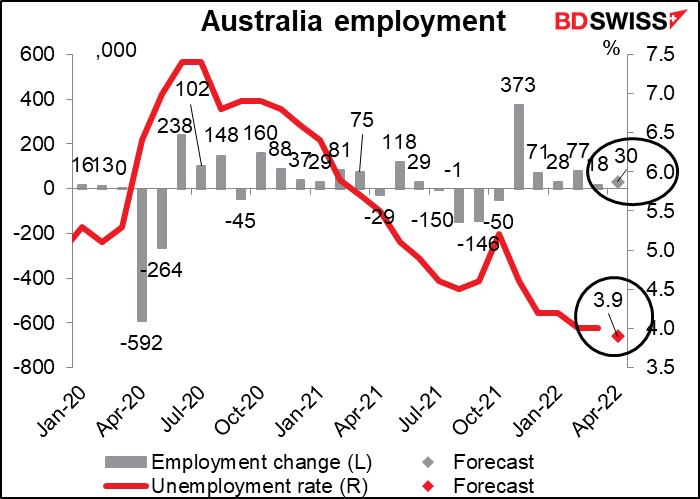 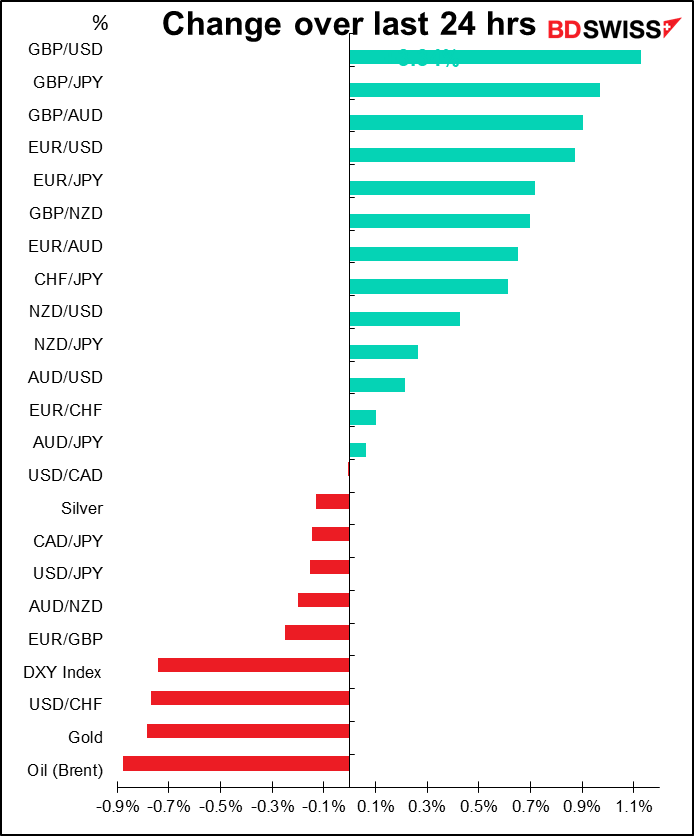